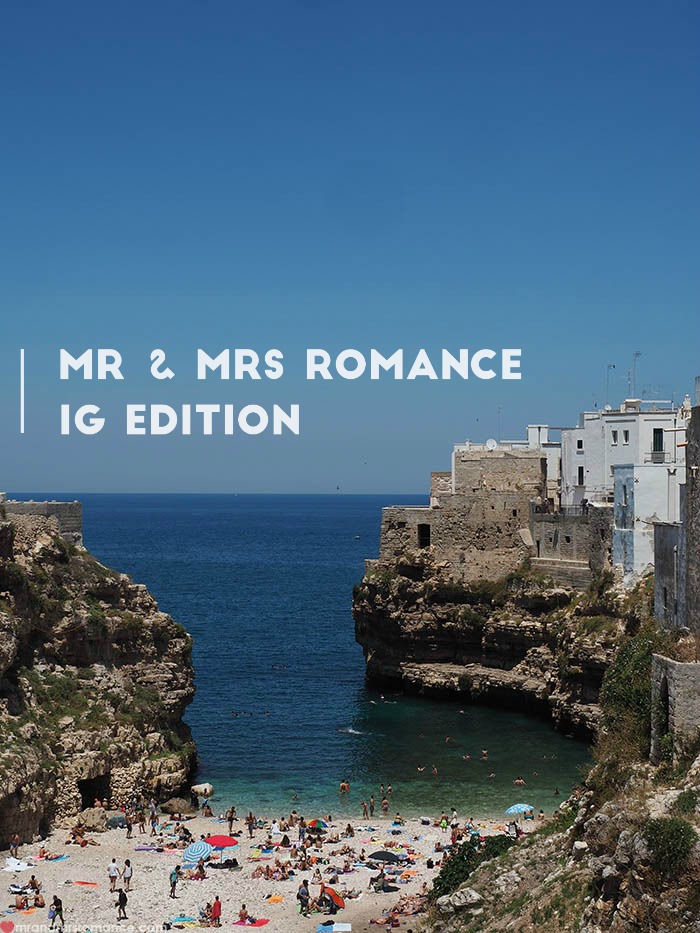 So much has happened this last week it feels more like it’s been a month. Since reuniting in Italy’s beautiful southeastern region of Puglia, Mrs Romance and I have done a lot of exploring on foot.

In fact if our iPhones’ pedometers are to be trusted in any way, we’ve clocked up over 80km in the last week walking round ancient towns, paddling in stunning Adriatic beaches and tip-toeing through looming Roman, gothic and baroque cathedrals. Most of which, by the way, I’ve done in flip-flops – and they’ve almost had it.

So join us as the next stage of our European odyssey begins! 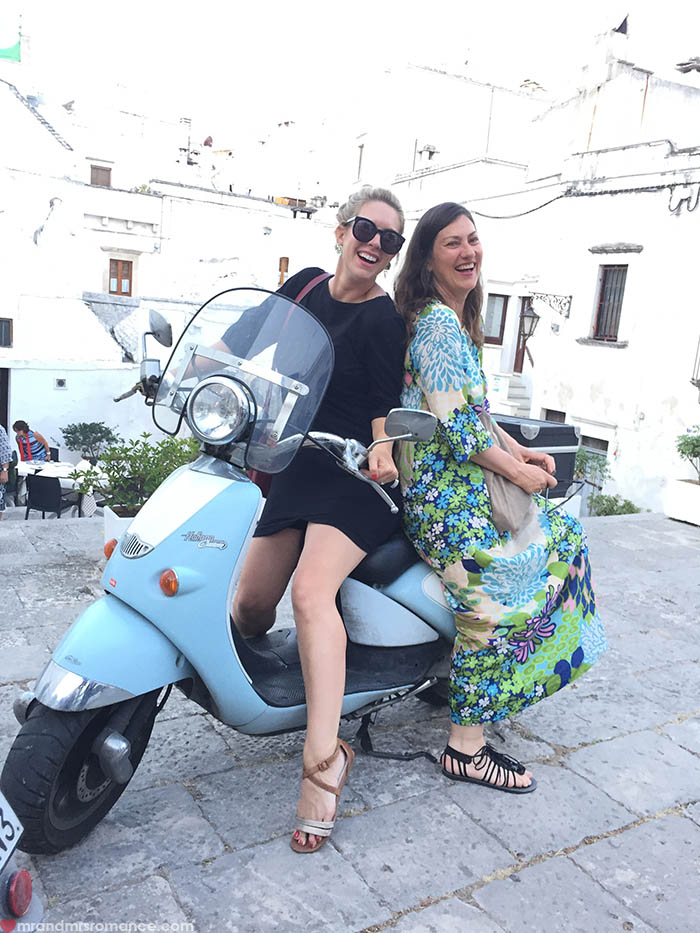 It’s the last day of Mrs Romance’s photography workshop with the lovely Carla Coulson. From all that I’ve heard, she’s had an amazing week learning some valuable new skills that you’ll definitely be seeing the fruits of in the next few days – even within the virtual pages of this post in fact.

By the way, don’t worry – Mrs Romance didn’t drive off with Carla on the bike like this. After all, they weren’t wearing any helmets. 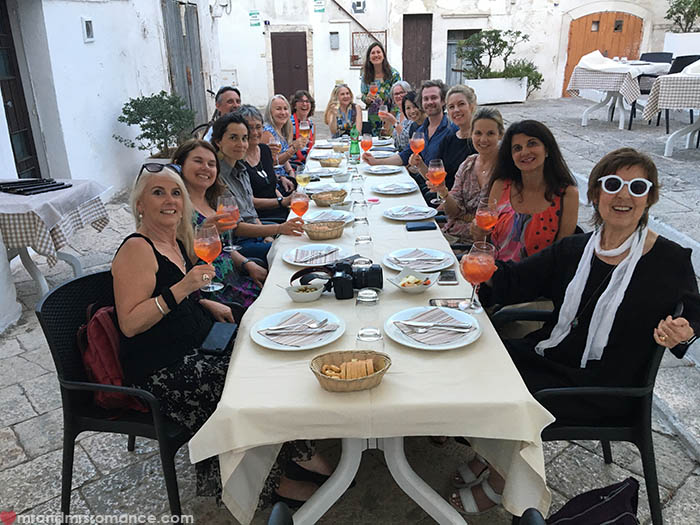 As Mrs Romance’s photography course comes to an end, the group has one last dinner together – with a round of spritz Aperol of course! Mrs R has told me a lot about these guys. I think she’s going to miss them! 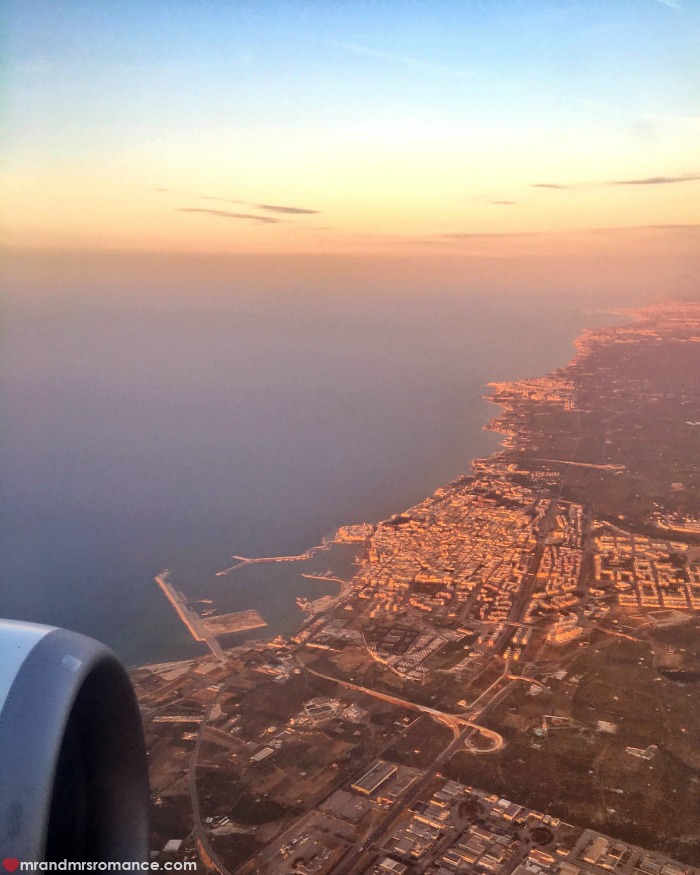 Meanwhile, I’m aboard my flight from Stansted just about to come in to land at Bari Airport as the sun begins to set.

This isn’t Bari, by the way. This the next little harbour town north of Bari called Molfetta. 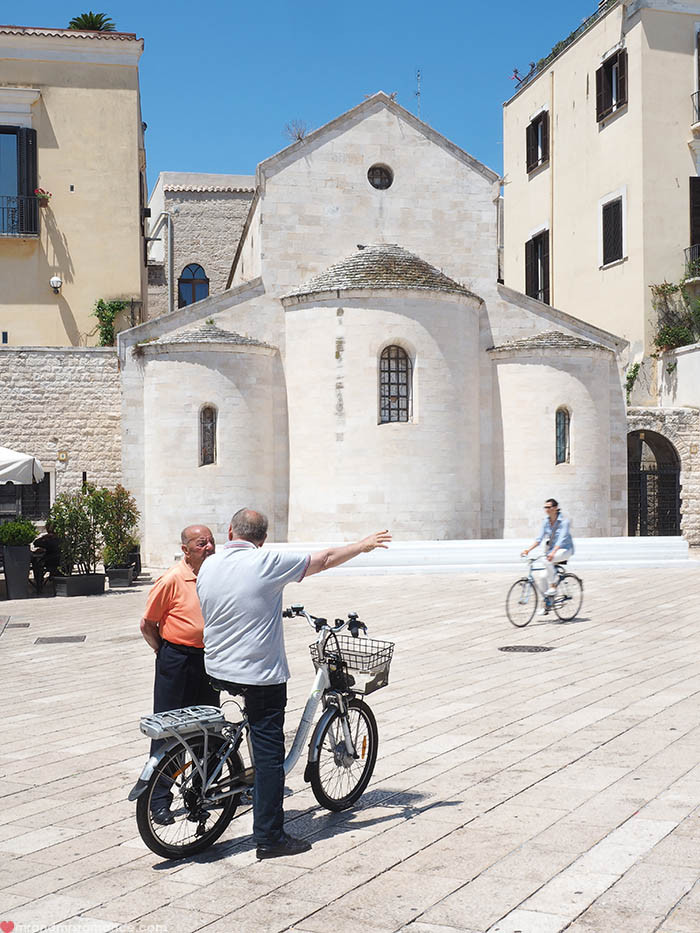 It’s my first full day in Italy and it’s like coming back home. The weather is perfect, the people of Bari are friendly and Mrs Romance is excited to play tour guide around the city she has spent the past couple of days photographing. The white walls, tiny cobbled alleys and grand piazzas are a lens-junky’s paradise. 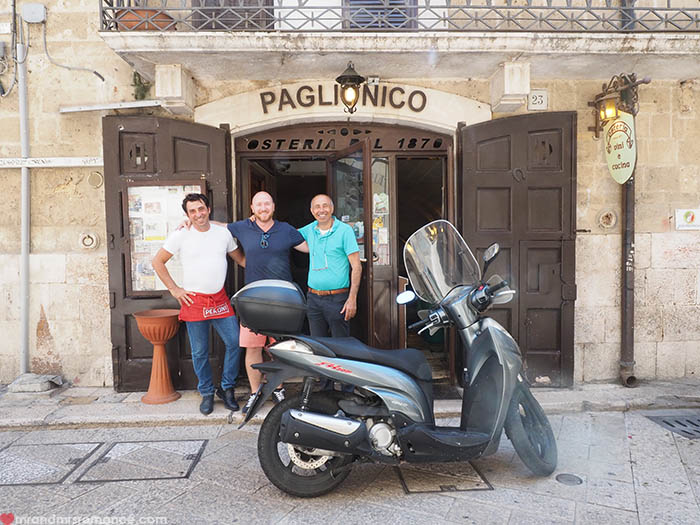 Today, we make ready to leave Bari and head further south. Before we go, we’ve hunted out a little place our friend Gareth told us about called Vini e Cucina. Even though Gareth hasn’t been to Bari for over 15 years, something told me this place would still be here.

Sure enough, Vini e Cucina is open for lunch – and what a lunch! There are no menus here and the kitchen has only a few options you have to negotiate with the waiter, but the subterranean space with its wine cellar style vaulted ceiling makes for a beautiful meal setting.

You can imagine the people who have come to dine at Vini e Cucina over the years – and as you can see it’s been an osteria since 1870. This place is well worth hunting out. 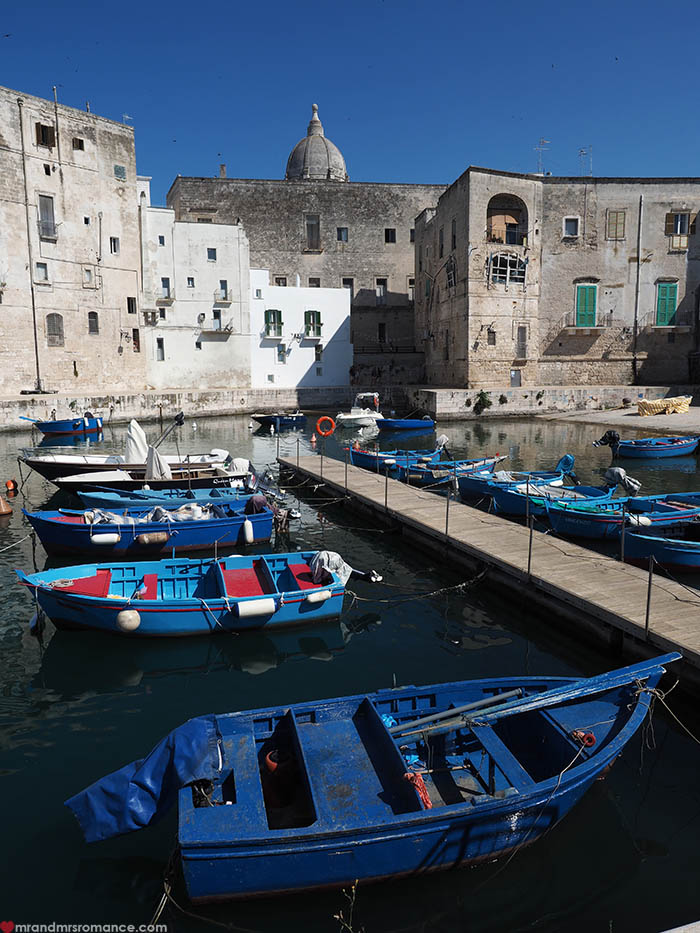 Our next stop in Italy is the beautiful harbour town of Monopoli. Only three stops south on the train (about €3 each) and you’re in one of the most delightful parts of coastal Puglia.

The old city climbs right down to the water’s edge here and you can see the fishermen going about their business, as this is still an operating fishing port. 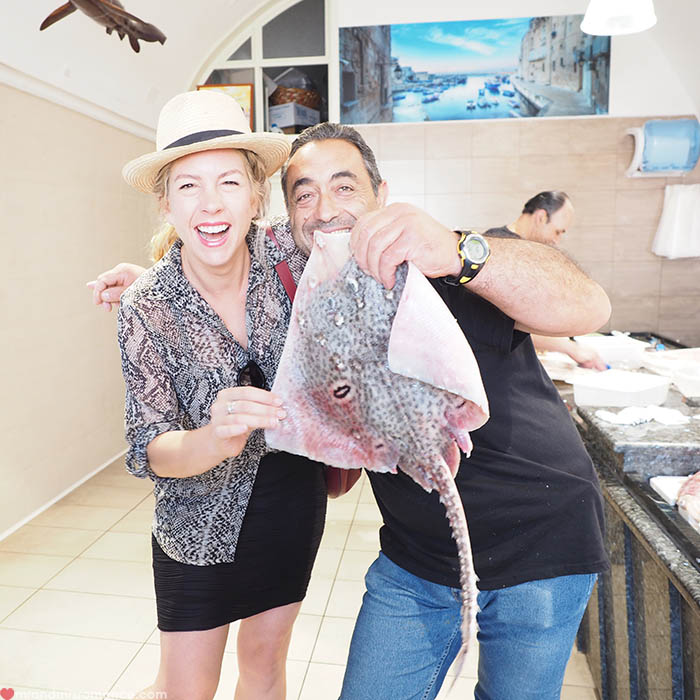 Round the corner from our perfectly situated AirBnB apartment is a fishmonger’s. On a foray for snacks, Mrs Romance has popped her head round the door and discovered not only a very friendly local shop owner but also the inspiration behind the pattern on her shirt! 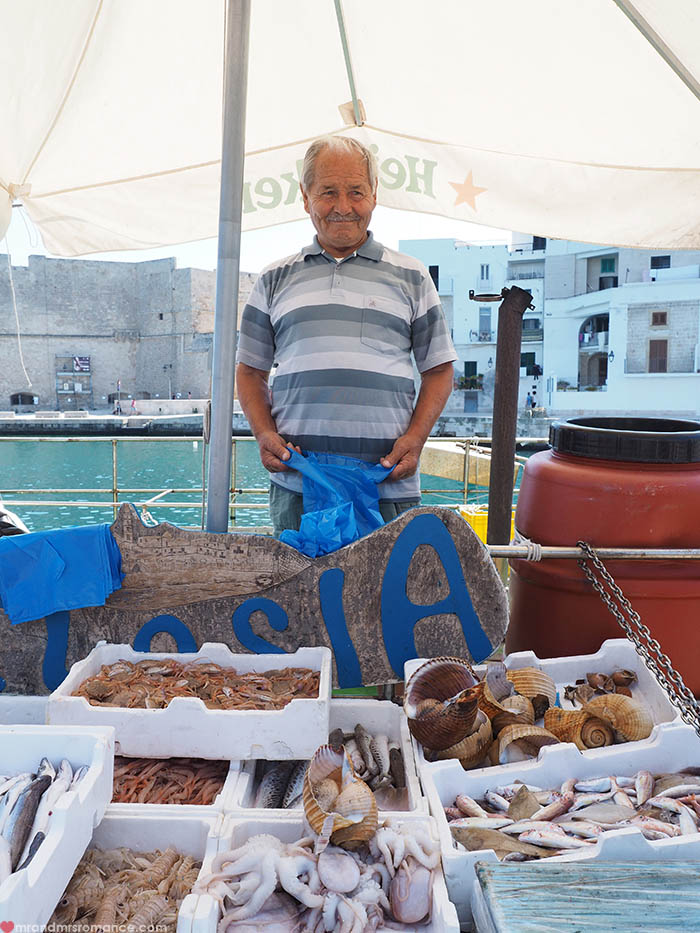 Further down towards the water we discover a fisherman selling his catch from his trailer. Everything is so fresh here – from the octopus to the giant shellfish. And the locals a really excited about it too! 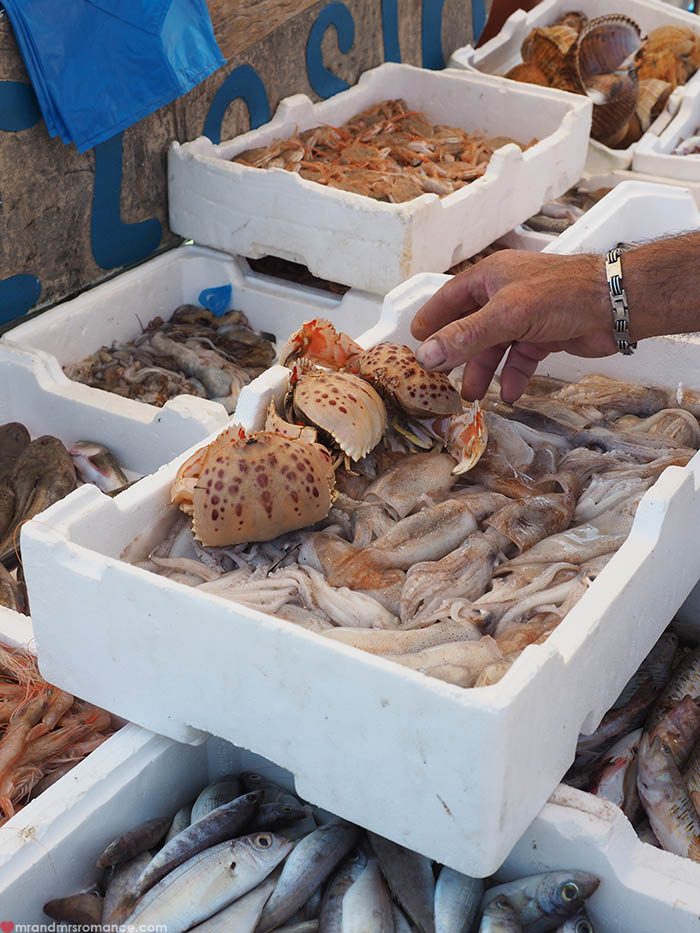 As we stand and admire the fisherman’s haul, more and more local people gather round to buy up what’s on sale. It almost feels fake to be so close to this kind of lifestyle, but this is the beauty of Italy. This sort of thing happens every day here!

You can see more of what it’s like in Monopoli in our Instagram Story we’ve also uploaded to Facebook. It’s a day in the life of Monopoli and takes you through what we’ve been getting up to while we’ve been here. 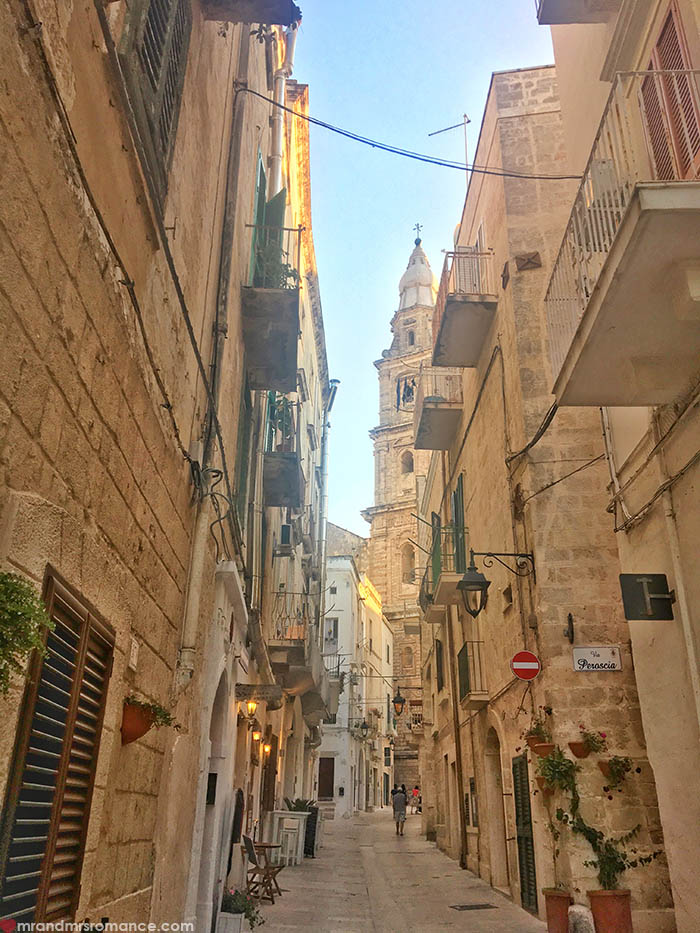 Today we’ve hopped back on the train to go north again. This time, we’re only going one stop though to the famously pretty town of Polignano. Its beach and old architecture pulls in locals and tourists and you can see why.

The narrow streets and looming beauty of Polignano’s sandstone houses make for an entrancing stroll through old Italy. 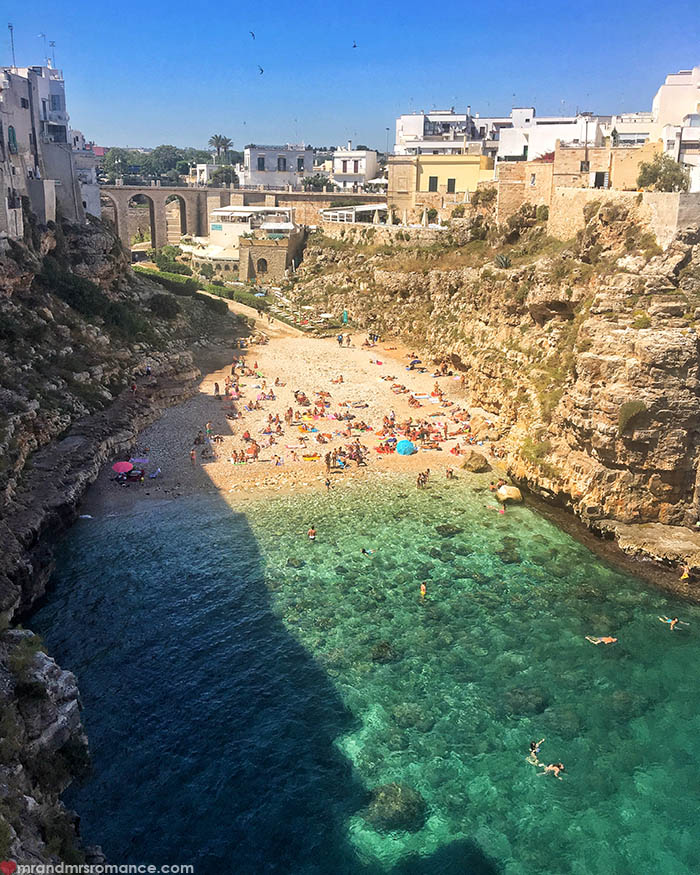 As for the beach, the ancient ramparts of the castle delve into the cliffs on the left and the stony beach runs straight into the crystal waters of the Adriatic Sea. These cliffs are also home to the Redbull Cliff-diving Championships you might have heard about.

I wouldn’t, but you can imagine this being almost irresistible for some wanting to fly off a high cliff into water. I think I’ll just stick with a paddle and an ice cream though! 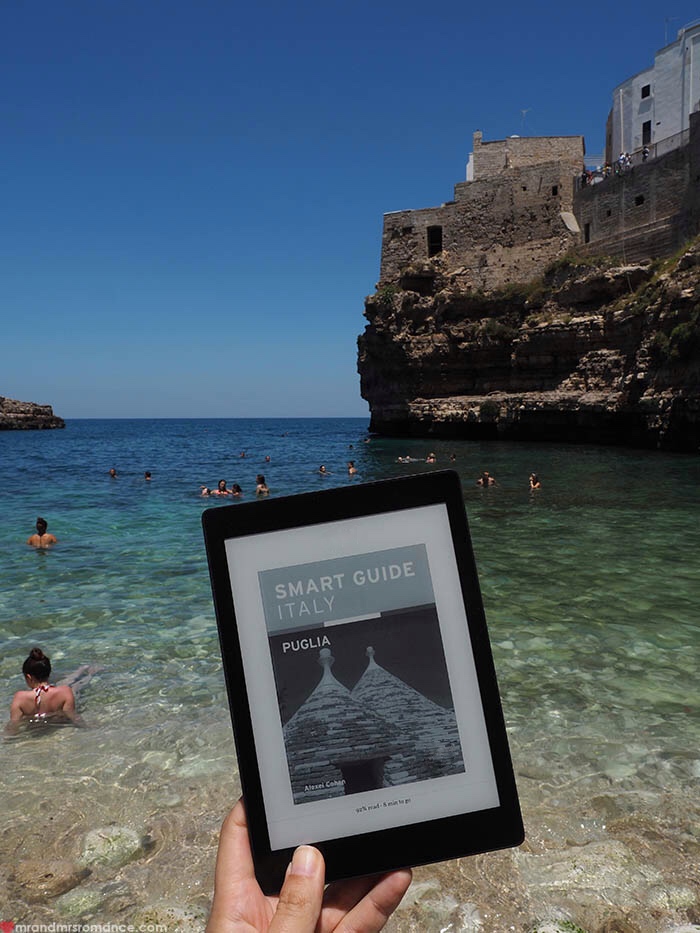 We’ve made our way down to sea level for a dip. The water is so refreshing and the beach itself – although not sandy – is perfect for relaxing and doing a bit of research for the rest of our trip on our Kobo.

The thing I like about the pebbles on the beach is they don’t get everywhere – unlike sand. They’re a bit lumpy to lie on, but compared to the delayed discomfort you get from sand, it’s a small trade off! 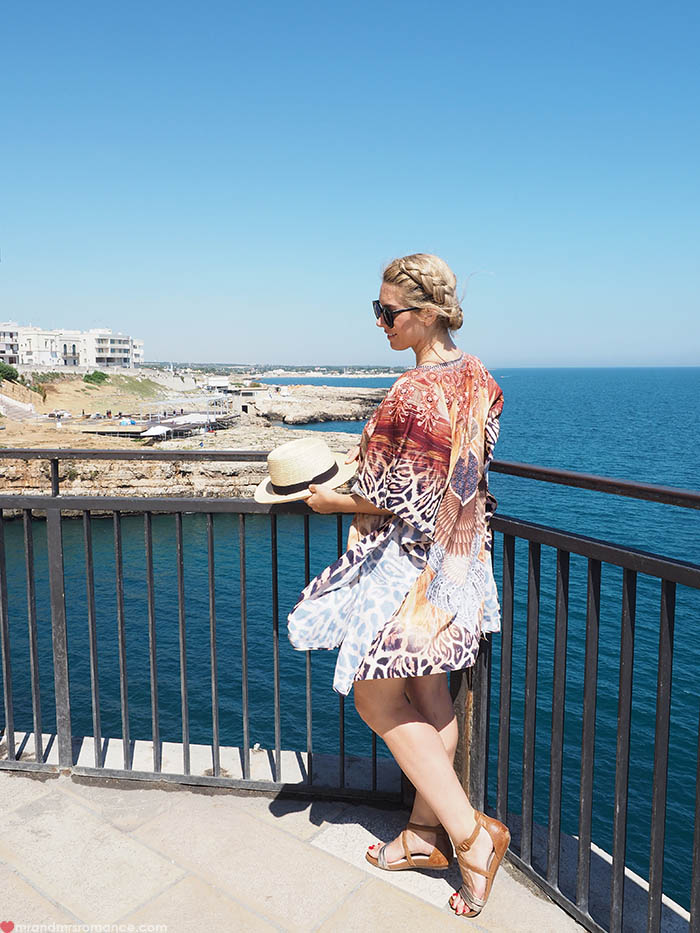 Back up the cliffs, we’re taking in the the afternoon views of Polignano. The stage they’re building just left of Mrs Romance is probably for the next Cliff-diving comp… or it could be a concert. We’re not sure! What we do know is the views from up here are amazing. 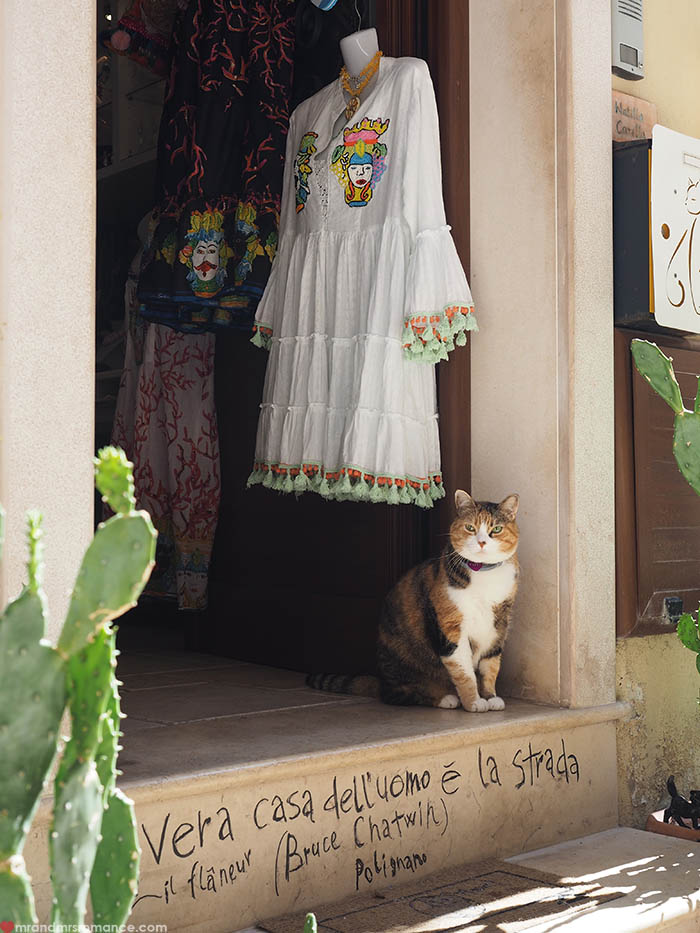 As we explore more of Polignano’s little streets, we see this little fellow. If you’ve been reading our IG Editions for a while, you’ll be familiar with Leash Cat – our tethered neighbourhood kitty in Sydney. Leash Cat’s Italian counterpart – ‘Il Gatto Guinzaglio’ – is just as cute and seems to be just as simple too.  Not a sharp tool, I’m afraid. 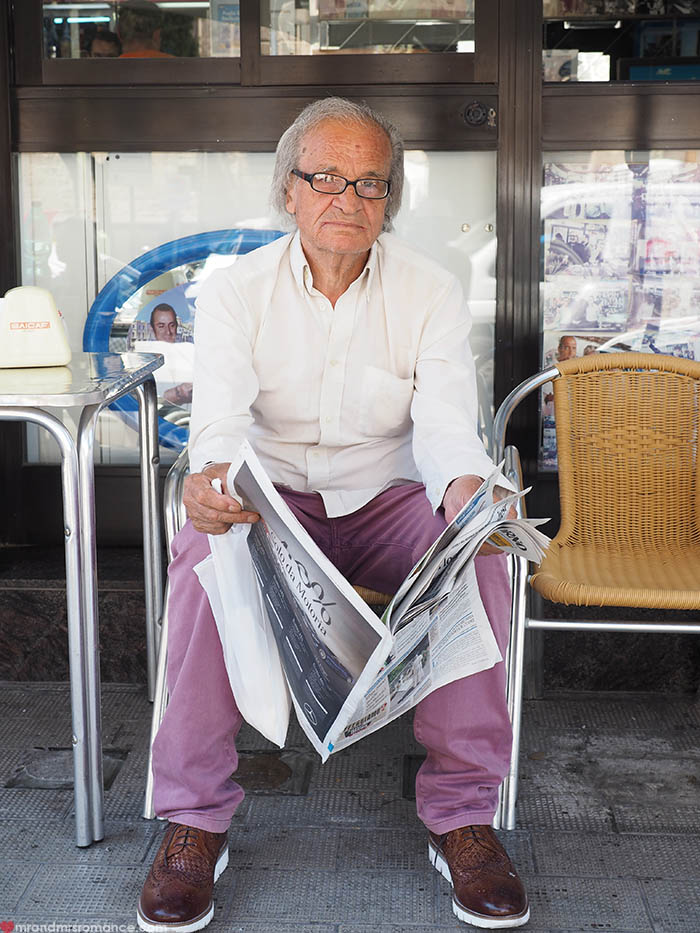 This fellow on the other hand is sharp. A fascinating chap we’ve met as we sit to enjoy a quick gelato and drink. Believe it or not he’s in his mid 80s  and has travelled the world. However, his travelling came to an end when he was made a widower 12 years ago. 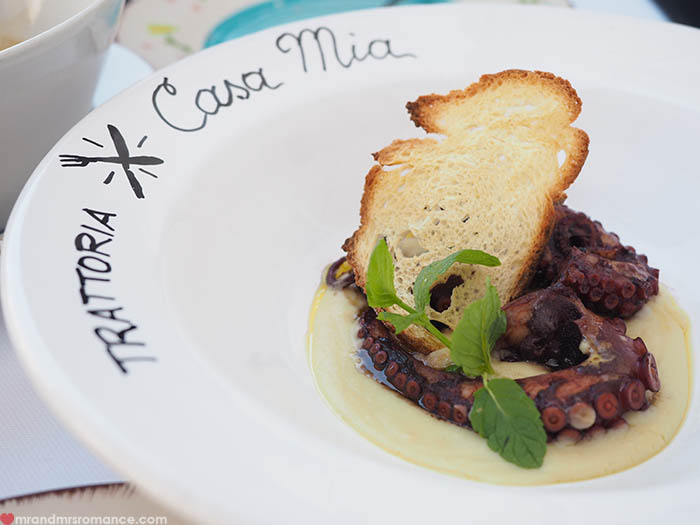 Before we head back to Monopoli, of course Mrs Romance and I must eat. Once again, we’ve taken our own advice about travelling in Italy and we’ve found a place that’s a little bit away from the tourist crowd.

Only a street back from the piazza and two streets back from the old town proper, Trattoria Casa Mia is not only cheaper, its food is more authentically Italian, beautiful quality, and much quieter, relaxing and sophisticated.

Mrs Romance’s polpo (octopus) is incredibly tender – and we now know how they do it. The fishermen will spend hours either whacking the dead octopus they’ve caught with a wooden paddle or thrashing them against the harbour walls.

But if there was a dish that I could eat for the rest of my life, this would be it. 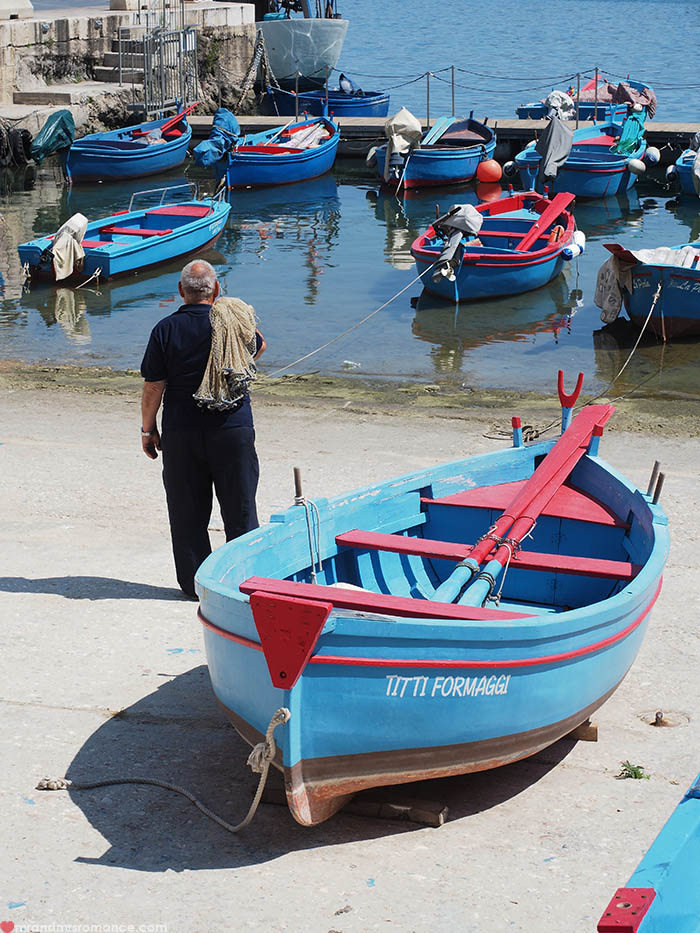 Back in Monopoli we’re constantly drawn back to the harbour and its fishermen. It’s such an interesting place to watch things happen. Moments after this shot, this guy threw the net he’s carrying into the shallow water off the boat ramp and hauled in a catch of small fish ready for bait.

His boat – the Titti Formaggi – will no doubt be bringing in more food to sell off the harbour wall soon. We never found out what ‘Titti Formaggi’ meant, but there is a cheese shop that goes by the same name, so we presume there’s a connection. 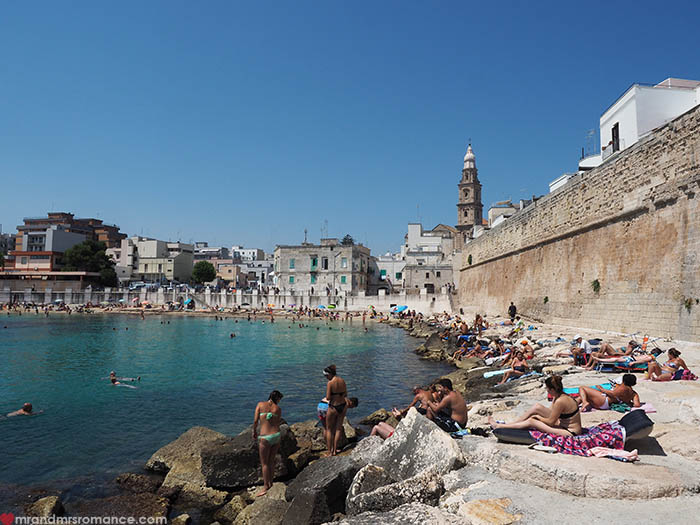 It’s another hot day in Monopoli and the locals are out in force here at the town’s little beach. This one is sandy, but many of the locals prefer the big rocks for lie out and bake on instead of the sand. Perhaps because of the post-bathing discomfort I mentioned earlier, or perhaps it’s just they like the barbecue effect the hot stones have on their immaculate tans! 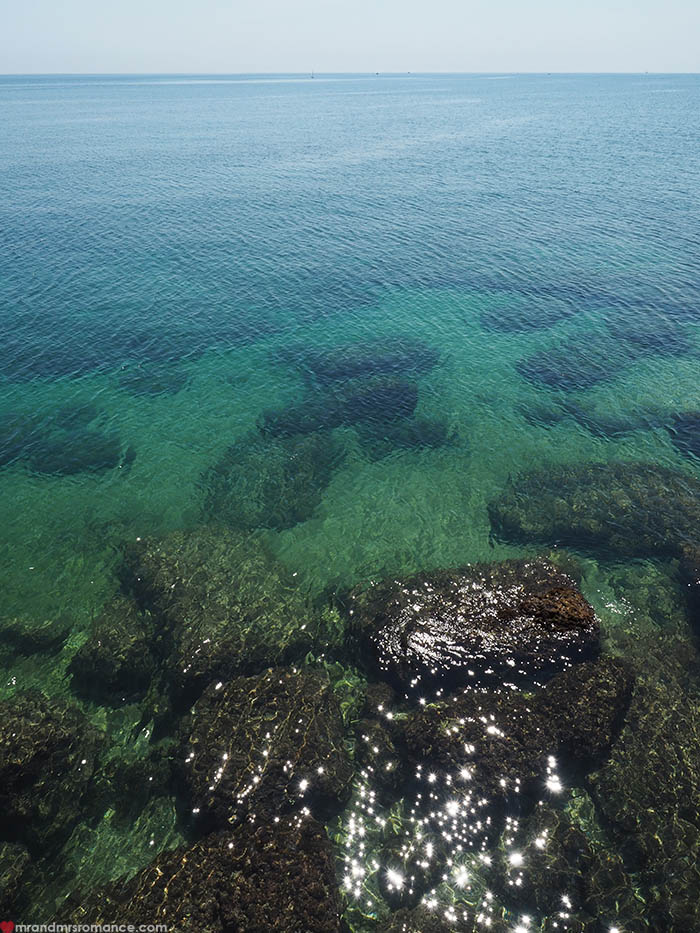 We’ve walked (clambered) all the way round the rocks to the beach and we’ve been rewarded with views of the water like this one. Perfectly clear, blue-green and immensely inviting. Especially when the mercury is nudging the 39°C mark. 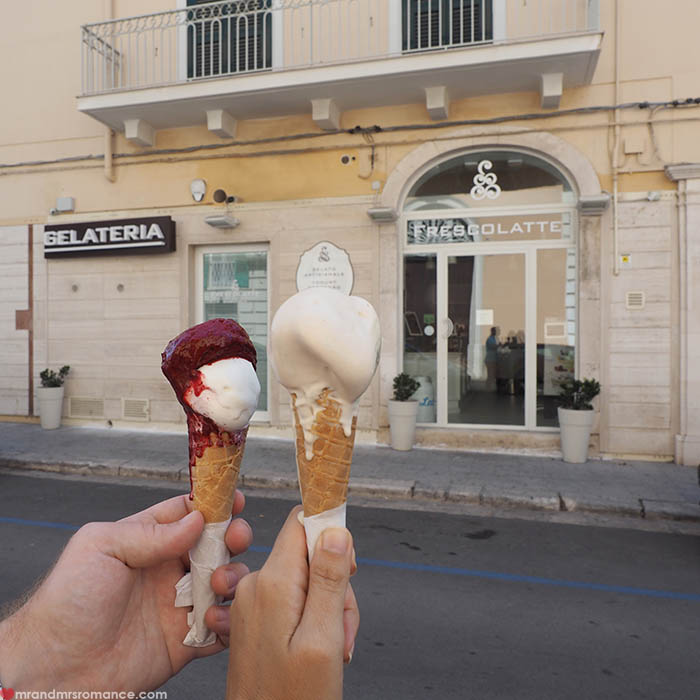 However, when it’s really hot, the only thing for it is gelato. Thankfully, Mrs Romance always does her gelato research and has found the town’s – if not the planet’s – best gelato. Here at Frescolatte, they make the most insanely delicious and creamy gelato you can imagine.

Raimondo makes this stuff in the kitchen at the back of the shop and it’s exquisite. The red berry one I’ve got is beautiful and the pistachio flavour has permanently changed Mrs R’s brainwaves. I don’t know what she’s going to do when we leave – I don’t think she’ll cope! 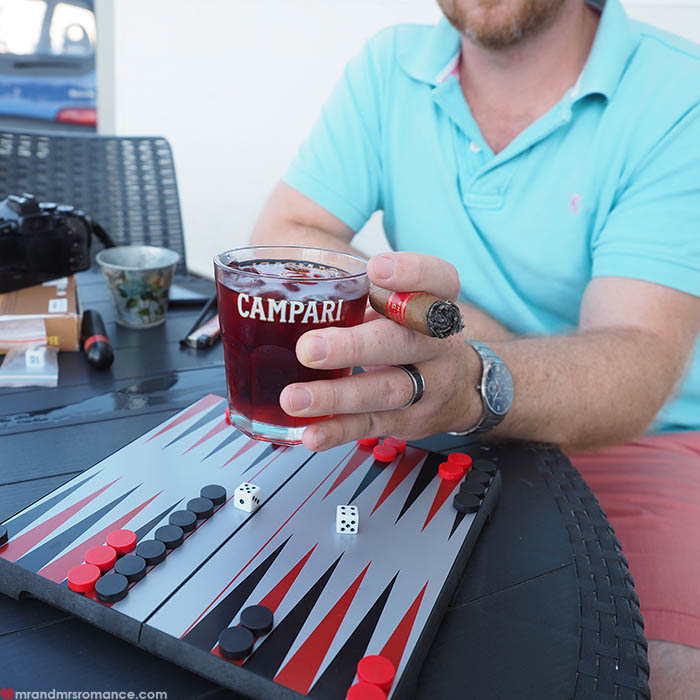 Thankfully the temperature has dipped a little, so we’ve taken ourselves to our local bar on the harbour – Bar Malindi. This place makes an excellent negroni (for €4 each btw) and has lots of outdoor seating. We’ve pulled out our travel backgammon set and I’ve taken the opportunity to spark up a cigar.

It’s a Partagas Serie D No.5 if you’re interested. Yes, thanks, it was amazing!

This place is also responsible for our morning coffee – extra credit goes to the baristas at Malindi! 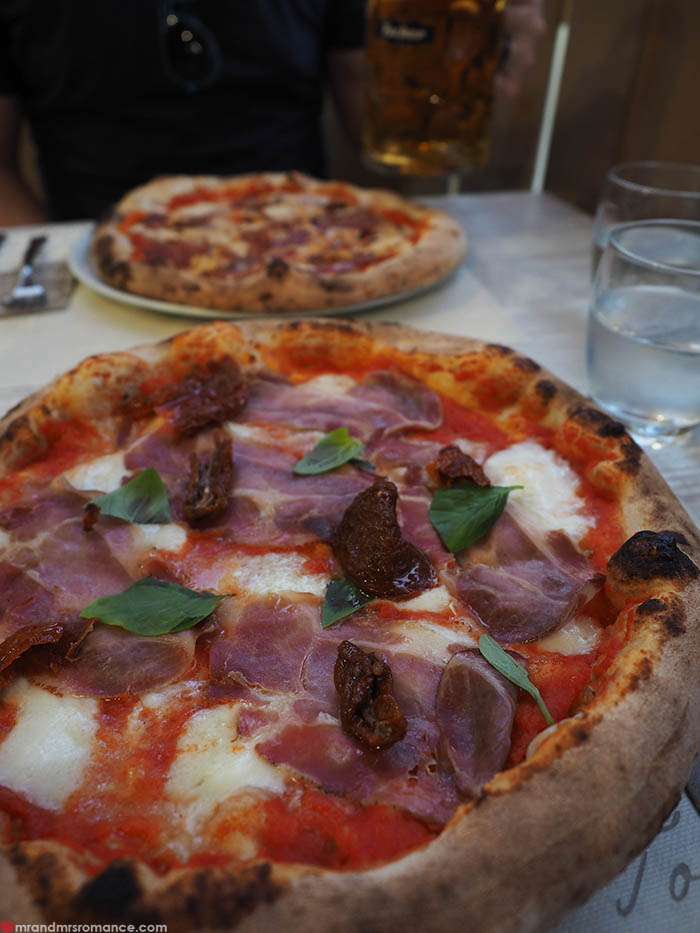 And now it’s time for dinner. If you’re looking for pizza in Monopoli, the only place you should go is Ai Portici. It’s got a menu of over 100 pizzas and a pretty awesome beer list too. I think I’ll be dreaming of this place for the rest of my life. Superb food. 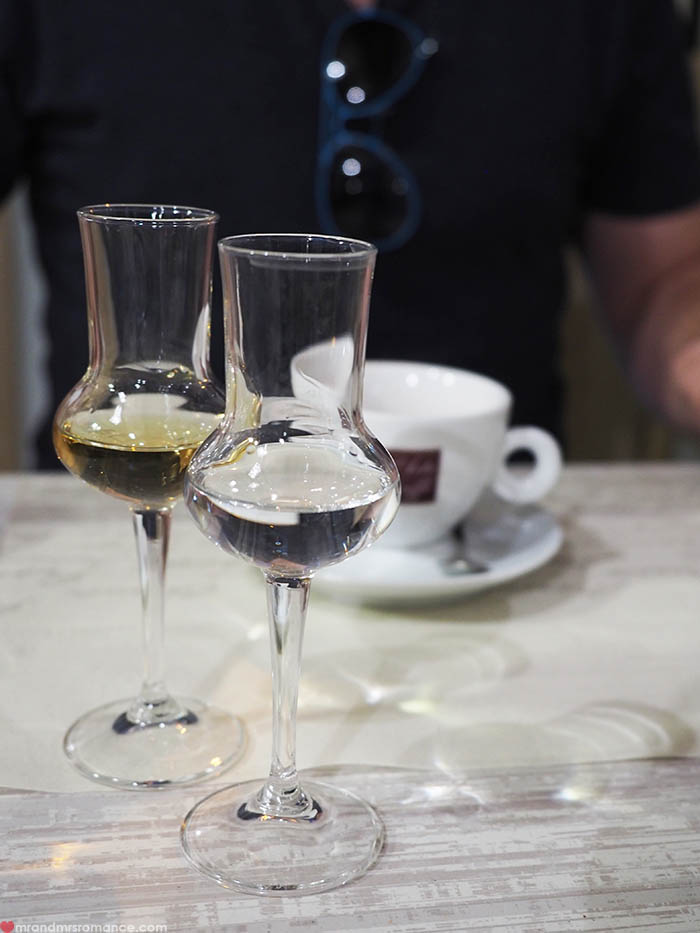 When you’re in Italy and the waiter suggests grappa after your meal, I believe there is a law here that says you must accept. Especially when you find out they serve a barrel-aged grappa called ‘barrique’. Smooth, caramel, woody – this is next level grappa.

Grappa, by the way, is an Italian digestivo liqueur. It’s made from distilling the grape stalks to make a very strong alcohol similar to schnapps or the Czech brew ‘slivovitz’. It’s also what Mrs Romance terms as petrol. 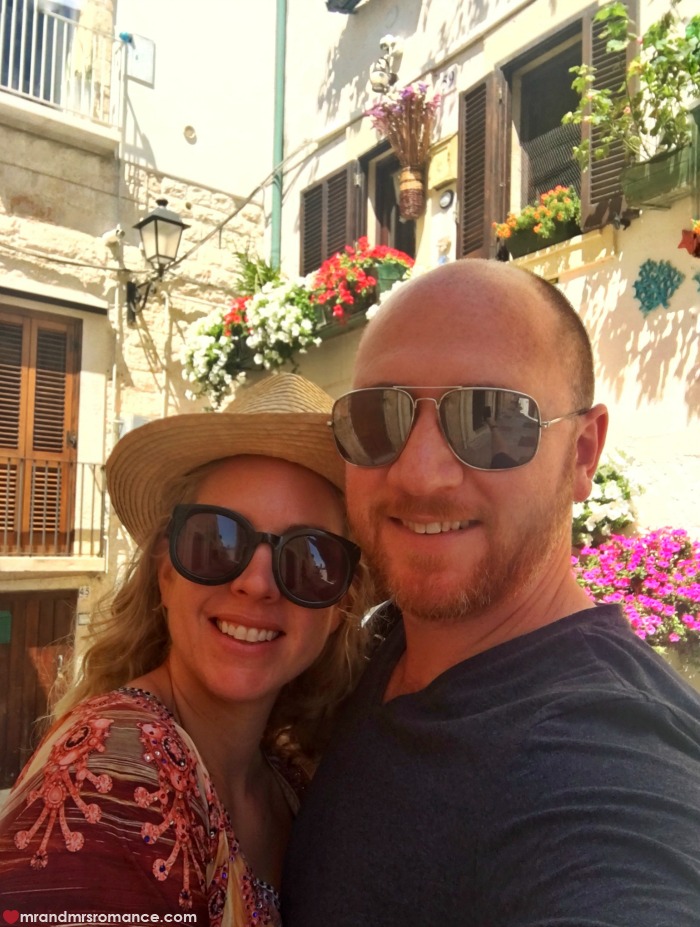 Well, we hope you’ve enjoyed this week’s IG Edition. We can’t wait to tell you more about what we’ve been up to, so stay tuned for more of our travel stories coming soon from the beautiful Italian south-east.

Speak to you again soon.

How much do you tip in the USA?

Tipping in the USA can be very confusing. Who gets what? How much is enough? How much is an insult? It’s a minefield –…