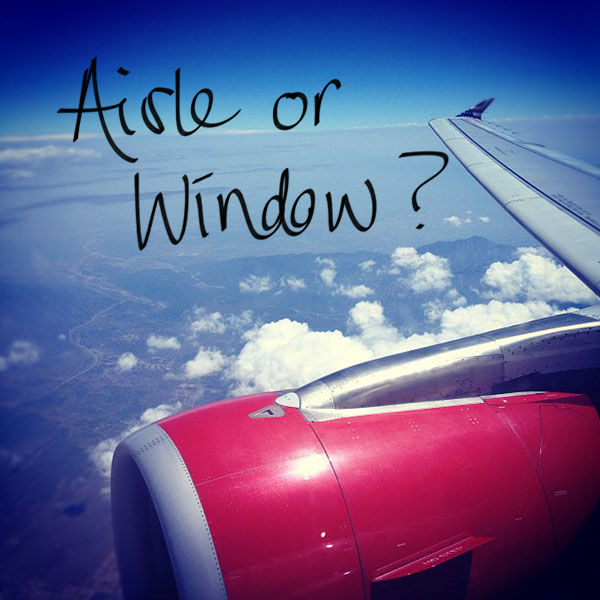 Even comedians use flying as a staple in their stand-up shows – that’s how much everyone has a plane story. We can all relate.

Whenever I fly, I try my best to get the window seat. Yeah, you get the views, but I like the window for other reasons: you get the extra bit of storage down the side between the chair and the fuselage. And best of all, you don’t get compulsive toilet-goers or fanatical leg-stretchers clambering over you like a troop of monkeys throughout the flight.

The aisle seat is my idea of the worst way to fly. if you’re not being used as a scrum machine by over-enthusiastic bathroom-obsessed passengers sharing your row, you’re being bumped by clumsy ‘aisle walkers’ or your shoulder is being used to test the rigidity of the food trolley as the flight attendants serve ‘dinner’ (I don’t actually mind plane food – controversial, aren’t I?)

People who say they like the aisle seat for ease of access to the rest of the place and for extra leg room are kidding themselves. You rarely get time to enjoy such meagre profits with the people sitting  next to you seem intent on accessing the rest of the plane all the time!

It always surprises me when I see people charging to the aisle from their middle or window seat like there’s a fire on board. I mean, I’m no bonobo but I reckon I’m nimble enough to get over the other chairs by standing on the arms of the seats so I don’t disturb anyone… but only when I need to.

Over the years, and all the thousands of miles clocked up from long haul flights, I’ve taught my body to go into a kind of weird hibernation as soon as I step on the plane.

I can fly from Sydney to Singapore with one toilet break, and then from Singapore to London with one more. I think it’s because I keep the alcohol to water ratio in that fine balance where I’m not dehydrated but I don’t need the loo much.

I also make myself watch as many films as possible. It helps my brain fade into that numb zombie zone needed for 8+ hour flights. It’s also because I’m a massive Scrooge and it feels more like I’m getting my money’s worth! 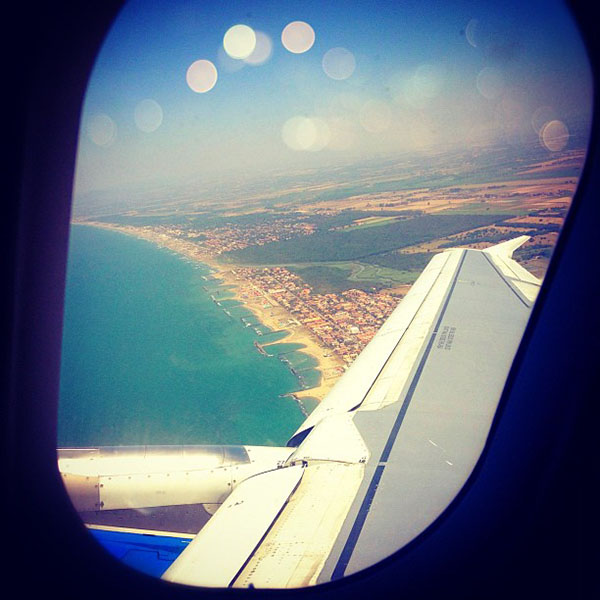 As a kid, I always chose the window, and Mum and I would take turns at who got the window seat.

My Dad was a frequent flyer for business and was always in the aisle seat. I remember he filled every page of an extended passport with stamps in less than five years. He had to get another passport as there wasn’t space for one more stamp. My Dad flew all over the world and before there was Seat Guru you would check with him as to which was the best seat in every aircraft.

When I started to fly on my own, I took Dad’s lead and chose the aisle seat too. The aisle is the most convenient and gives you the ability to move around whenever you want.

But I like to sleep on planes and I resent being woken up by other passengers who also like to get up and move around.

So I converted back to being a window seater.

I’d rather climb over someone than be woken and constantly interrupted by my seat neighbour who wants to do laps of the plane.

I also have a nifty trick for stepping on the arm rests and climbing over sleeping passengers so that I don’t have to interrupt their peaceful rest.

Plus now with my Instagram obsession, I need to take the obligatory “out of the plane window” photos. (Don’t tell me you don’t take those photos too!)

If you’re still a stalwart aisle seat lover, my tip for you is to keep your elbows in. Those food trolleys can really crack your funny bone as they fly down the aisles.

Which do you choose – aisle or window?

Can’t choose between beer, wine or whiskey? You should head Westward

From the craft beer capital of the USA, this distillery combines the best of beer-making as well as using local Pinot Noir casks to…