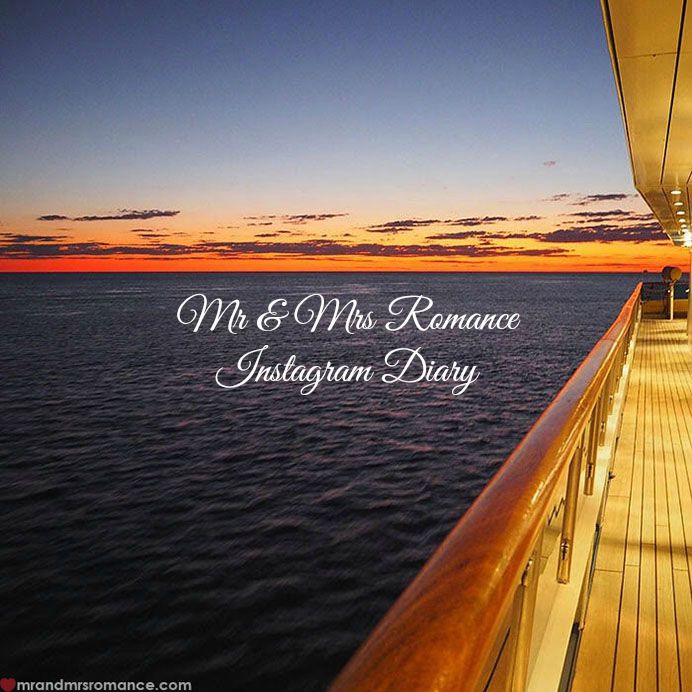 It’s been a remarkable week for us. Our journey up the northwest coast of the Australian wilderness continues from Nares Point and Crocodile Creek north on our way up to Darwin.

Our first sunset aboard our exploration ship The National Geographic Orion is pretty special. We’re really looking forward to settling in here and then investigating the wildlife of this amazing region. 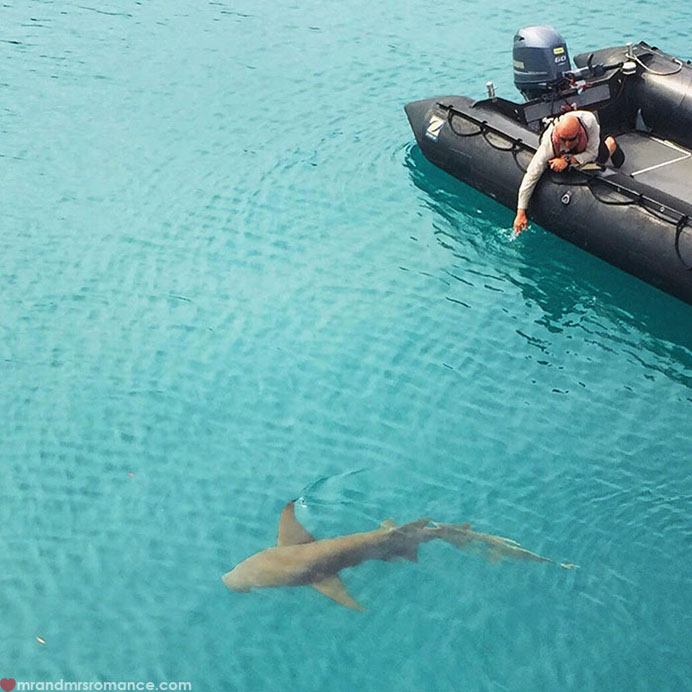 While we’re at anchor, first 1 then 3 of these tawny nurse sharks start circling the ship. They’re harmless but still, watching Steve – one of the naturalists on board – splash his hand in the water makes us feel a bit uncomfortable.

Tawny nurse sharks only eat crabs, octopus and things like that.

However, the bronze whalers that turn up at night fall would have enjoyed one or two of Steve’s fingers. A chilling thought. 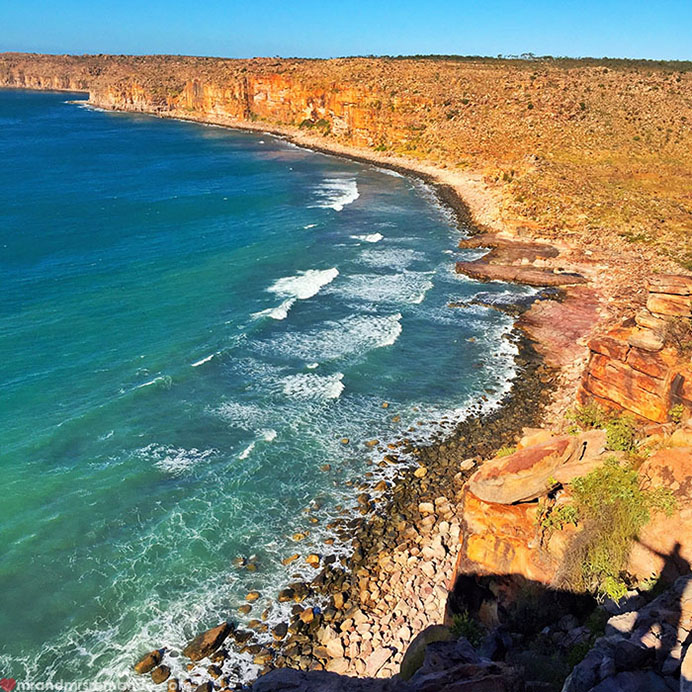 At the top of the cliffs around the bay, we’ve climbed up to admire the views. There are no paths up to this point, which makes the whole thing much more interesting. The ospreys circling above us and the gigantic green turtle we just spotted swimming off the beach below us really add to the feeling of being out in the wild. 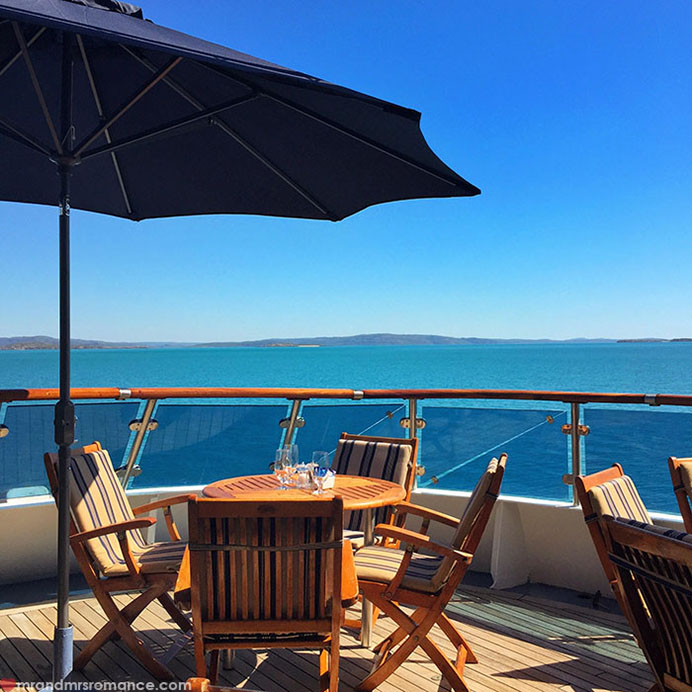 Back on board The Orion we settle down for a bit of lunch. It’s not a bad way to explore this hard-to-reach part of the world that’s for sure! 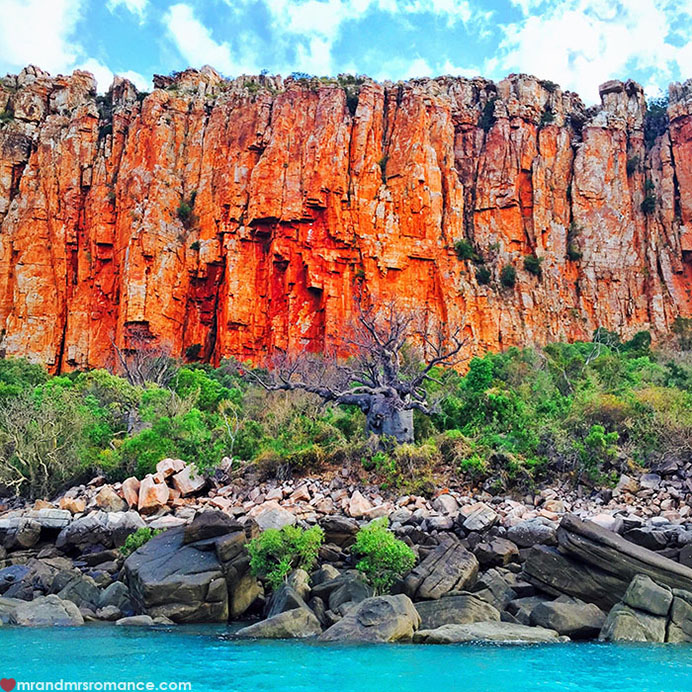 It’s so hard to give the cliffs along the Kimberley coast any scale. The ancient boab tree here is at least half a millennium old yet it looks tiny beneath the iron-rich red cliffs.

There’s something about the colours of this region that really are magnificent. The combination of the deep red rock, the brilliant green of the bushland and the vivid blue of the sky and the water – it’s an amazing place. By the way, the grey line of rocks at the waterline shows where the tide comes up to. This area has one of the most drastic tidal changes in the world of several metres. 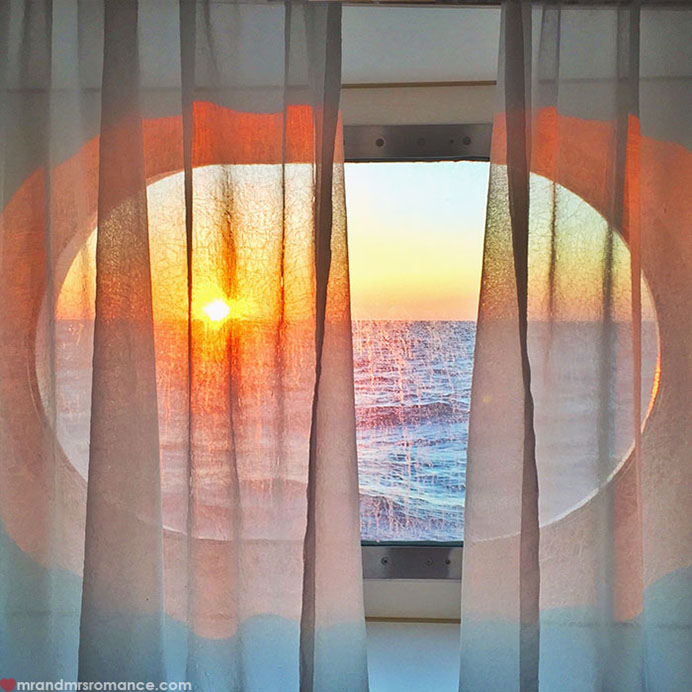 Even though we’re on the west coast of Australia, we’re far enough out to sea that we get to see sunrise over the ocean this morning. It’s a beautiful sight and not too unwelcome as we’ve got an early start today. 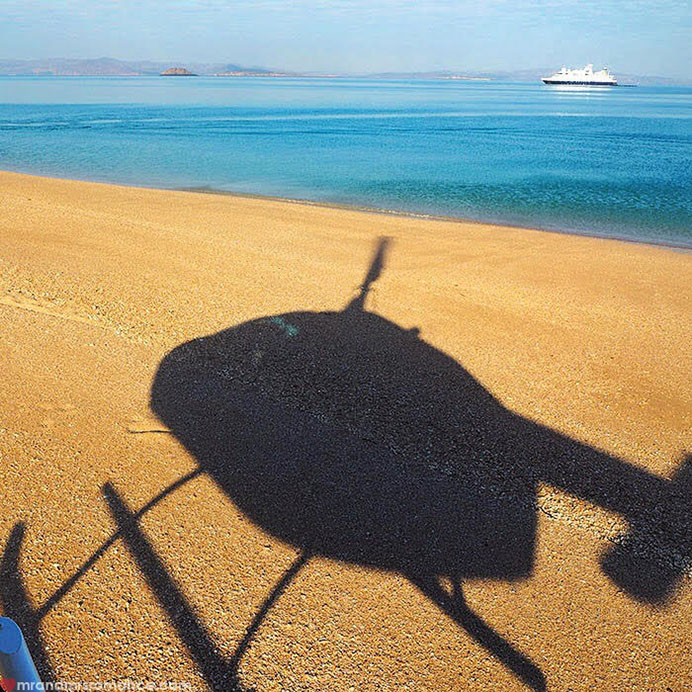 We’re swapping out our Zodiac speedboats for a helicopter to explore the landscape this morning. We’re heading inland a little way to check out the Mitchell Falls – the highest tiered waterfall in the country. The waterfall’s an exciting prospect but a ride in another helicopter is a real thrill. And this one’s taking off from a beach! 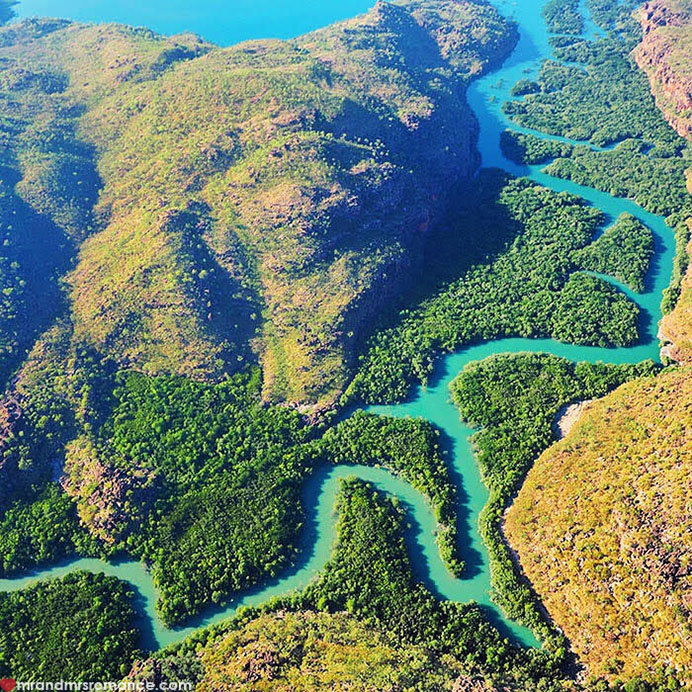 The view out over Porosus Creek – a saltwater crocodile playground – is absolutely stunning. It really doesn’t feel like we’re looking at an Australian landscape from here. 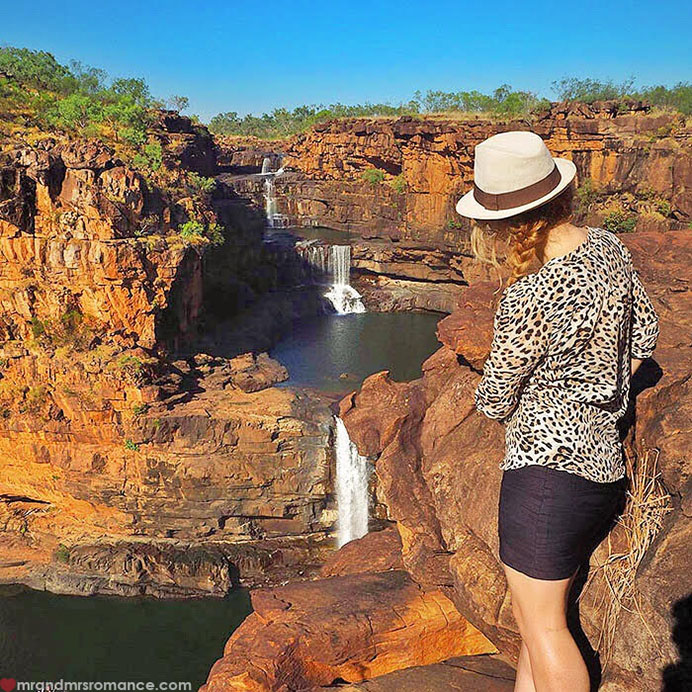 The view down over into Mitchell Falls is magnificent. Mrs Romance loves heights but isn’t so keen on cliff edges. The sight of this waterfall is too much of a temptation for her though.

The deep pools each of these falls flows into are sacred to the local aboriginal people – the Wunambal. They believe Wunggurr – spirits of the Wandjina – live in these pools and may punish people who disturb them. It’s enough to stop anyone swimming here… that and the fact that there are saltwater crocs here of course. 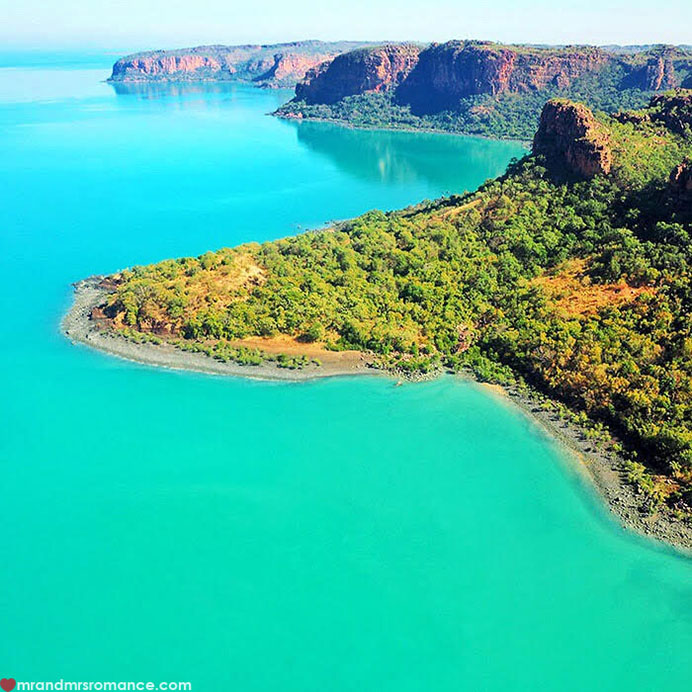 Flying back to our beach is just as pretty. The waters around this area are just stunning. 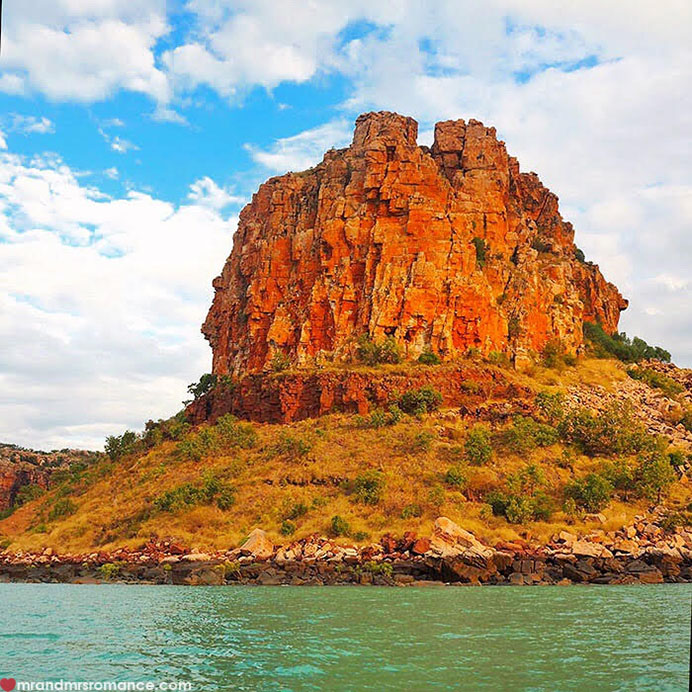 We can’t get enough of the rock formations in and around the Kimberley. It’s like nothing else on earth. We’ve got lots more to share with you a bit later as well. 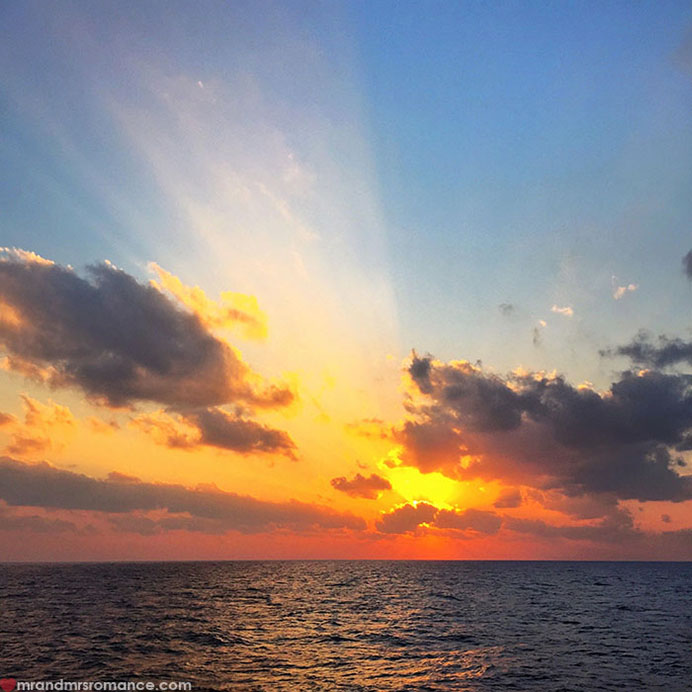 Sunset to yet another incredible day comes. We’ve got a feeling it’s going to be hard to say goodbye to this place. 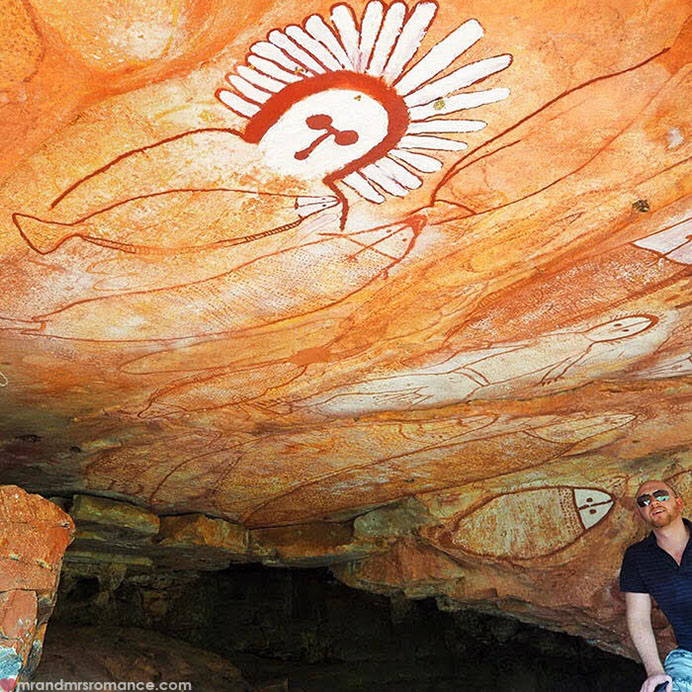 The Wandjina rock art – found only in the Kimberley – is at least 4,000 years old but is unique to the world. Nowhere else is rock art still maintained by its traditional owners.

From time to time, the custodians of this land come here and conduct special ceremonies. They’ll paint themselves and then the rocks, touching up the original artworks so that the paintings continue to be as bright and vibrant as they always have been.

The scale of this artwork and the huge numbers found all over the Kimberley is astounding. 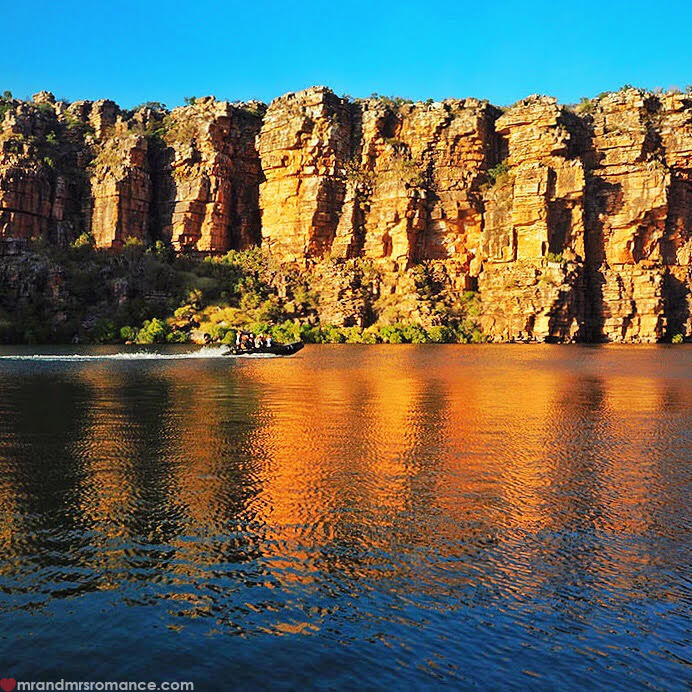 Seeing the Kimberley from the perspective of the water really is an excellent way to get some perspective on this place. Exploring the beautiful waterways, the cliffs the incredible birdlife here… these Zodiacs really get you close to it all. 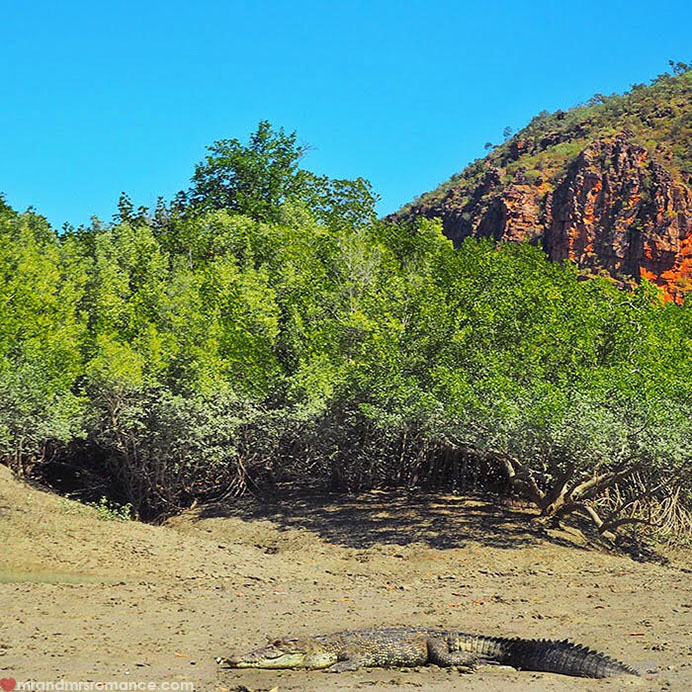 And by close, I mean close. As we motor along the Hunter River in particular, we come very close to these prehistoric creatures. They really are living dinosaurs.

Our naturalist is able to get us really close to some of these salties. It’s a good job they’re not too hungry – over the 3 or 4 metres’ distance between us and them, if they wanted to get to us, even over dry land, we wouldn’t have much of a chance.

All the amazing things we’ve seen and done while we’ve been here in the Kimberley make us wish we could stay longer. I’ve ticked off some seriously big wishes on my list – as has Mrs Romance. But sadly things come to an end and we’ll soon be in Darwin for the final leg of our journey. 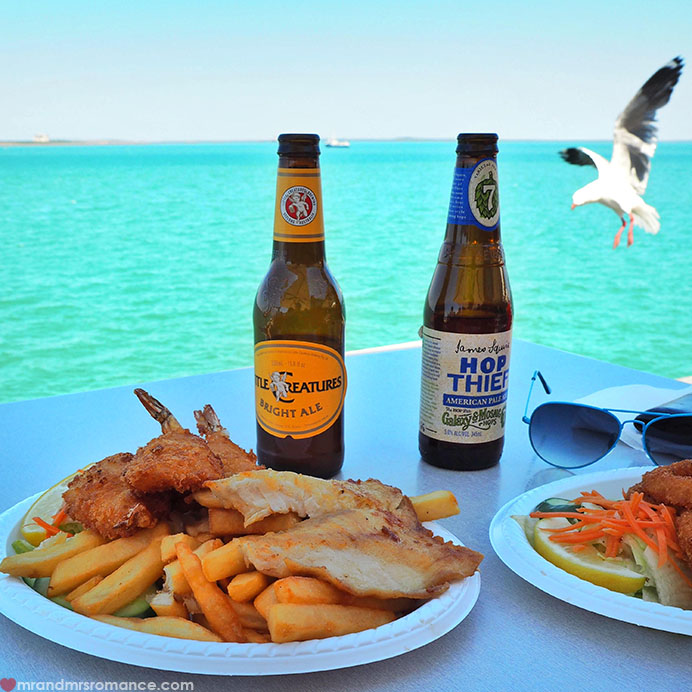 And here we are. Back on dry land, we’ve found the table closest to the sea’s edge as possible. The food at Stokes Hill Wharf isn’t too bad, but the view is just perfect. What a way to end this trip of a lifetime.

We hope you’ve enjoyed this week’s Instagram Diary. It’s been quite hard to put everything together to give you a good idea of what we’ve been up to while we’ve been away – especially with the very limited (and expensive) internet access available in the wilds or out at sea.

We’ll be giving you a fuller run-down of our time in the Kimberley over the next few weeks showing you some of the amazing shots we’ve taken in this photographer’s paradise. We’ll also be telling you a few of the stories and amazing things we’ve learned as well. Hopefully it’ll inspire you to visit this mindblowingly beautiful part of the world.

How have you been while we were away? Have you had any adventures? Tell us in the comments!

Where to eat in Maitland – 7 top spots

Already packed with some of the country’s best wineries, the Hunter Valley has a lion’s share of great produce. But of all places, Maitland…