I thought the camera on my iPhone 4S was good enough. I really did.

Even when Mrs Romance got her contract upgraded to the 5S, I still didn’t think there was really that much difference. I must admit I was quite jealous of the cool fingerprint unlock thing though.

But thanks to a short-term loan of a 5S of my very own and a quick masterclass, the two of us have been able to have a proper play around. Mrs Romance and I work with technology all day – and Mrs R is a professional photographer – but we were still quite surprised at how much this new model can do.

Here are our top 7 tips that’ll make you want to get dressed in a black onesie, put a tie round your head and go full on ninja with your iPhone camera!

1. The 1:1 photo format that takes a square photo

One of our favourite features that’s come from the iOS software update is the square photo option. We’re mad about Instagram, so being able to take a photo already squared off is a godsend. You can select this by swiping through the menu on the camera screen.

The Pano mode is really cool. You can find this when you’re in camera mode, swipe through the menu to the right. It’ll tell you to “move iPhone continuously when taking a Panorama”. You just hit the shutter button, then keep the arrow on the line as you pan the camera around your subject material.

You can pretty much take a photo of a 180 degree horizon in one shot with this feature, whereas previously it could only do about 100 degrees. The stitch tech is also much better on the new phone so there are fewer funny edges on horizons that used to occur on the older models. 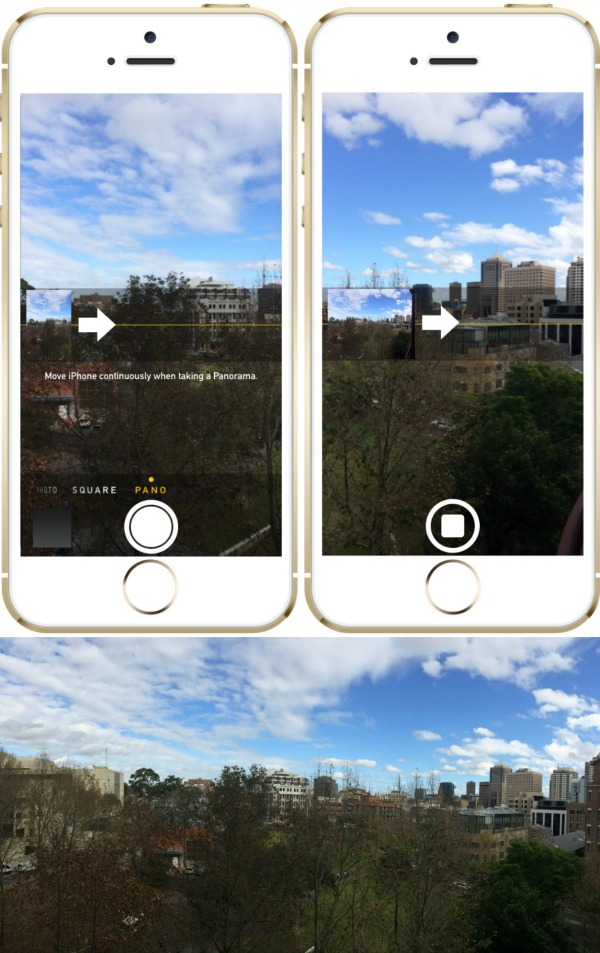 My nieces and nephew like to take Pano shots of people’s faces as they move around. It morphs your face like you’re having a bad trip! Try it – it’s very funny!

This is a cool function that takes a normal video but slows a section in the middle down to half speed. When you view the video, you can move where you want to slow the footage down or even make it all slo-mo. You can also trim the vid where it starts and ends. Sadly it doesn’t look like the slo-mo function translates to Instagram. Yet!

Find this function by swiping all the way to the left in camera mode.

You know when you touch the screen before you take a photo, a little square comes up and the camera focuses on that spot and adjusts the exposure? Well if you touch and hold your finger on that spot, the exposure and focus will stay on those settings. It’ll say ‘AE/EF Lock’ in a yellow box at the top of your screen.

With so many photos on your camera roll, it’s sometimes impossible to find a specific shot. Especially when you’re in the pub for some reason! The new filing system separates pics by year, then by ‘Collections’, then by ‘Moments’ and then individual shots.

If you have your location services on when you take your photos, the phone will even take you to the map and show you where you were when you took them!

You need to go to your photos to use this, not via the camera. 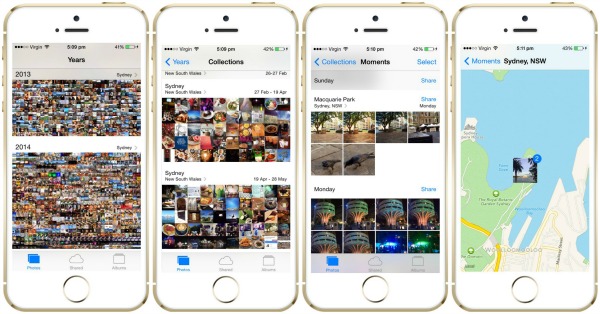 This is an amazing function, and apparently a world first for any camera, let alone a smartphone. If you want to take an action shot – of your ninja pal chopping a brick in half or something like that, hold the shutter button down and it’ll take about 350 shots in 30 seconds. I don’t know what its limit is – I got a bit freaked out when – at a minute – I’d taken 685 of my living room carpet.

Thankfully, all these photos are stored on the phone in a ‘burst’ folder, so it won’t fill up your photo library.

The iPhone 5S has two flashes on it. One is the normal one that makes everyone look like a reanimated corpse, but there’s a little pinkish looking flash right underneath it, which cleverly works out the perfect amount of red light to use to make the subjects look less ‘corpsey’. It’s also the quickest way to see if you’re looking at a 5S phone or not.

The new lens in the camera is also better at detecting light. We’ve definitely noticed the difference in low-light conditions between my old iPhone 4S and the 5S. 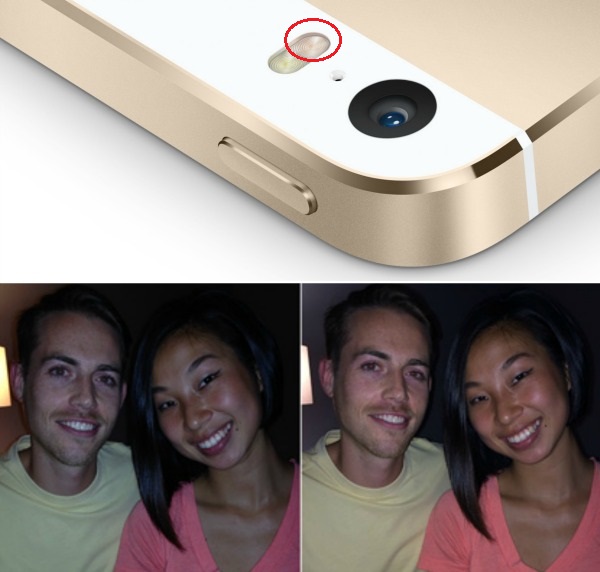 And as far as the hardware goes, the camera lens itself is also better. It still takes 8-megapixel shots (same as the iPhone 4), but the pixels themselves are bigger, which surprisingly is better.

Some of these features are only available on the 5S, as they’re hardware-related, but others – the AF/EF lock, square photo option and photo sorting system are available with the iOS 7 software update.

Do you have any fancy phone tricks? What’s your favourite feature on your phone? Tell us in the comments!

Images by Mr Romance and courtesy of the Apple Store’s website.

Mr Romance was given his 5S on short-term loan but loves it enough to want to talk about it. This is not a sponsored post.

Open windows to the world on your own walls – Photography Romance

To lose yourself in a picture is to travel without moving. That’s what Photography Romance is all about: to inspire, to beautify and to…