Napoli’s port was a disaster zone. Armed police scouted the area for pickpockets and queue-jumpers, herds of tourists ambled about like migrating wildebeest, and the burning summer sun scorched our anxious faces as we hunted for a ferry timetable. 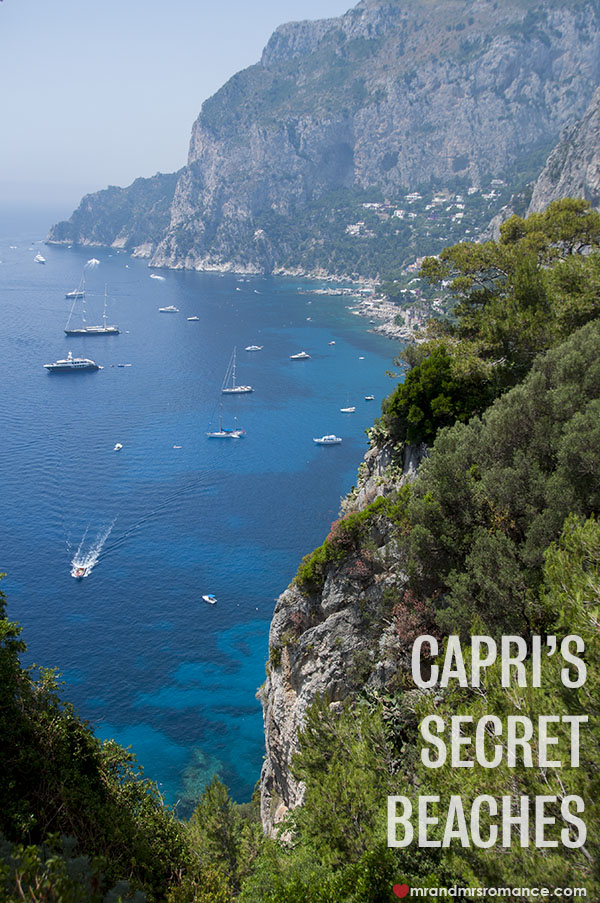 From Naples, it’s supposed to be an easy ferry trip to the legendary coastline of the Amalfi Coast. It’s better than getting a coach along terrifying roads and a no-brainer compared to a self-drive, which would probably have ended in our deaths.

But could we find our ferry? No. Not until the last one for the morning had gone, leaving us with just two hours at the most to explore if we were to catch the next one later that afternoon.

Mrs Romance was in tears, distraught that we’d come all the way to Naples only to miss going to the Amalfi because of a ferry. Then I spotted the next ferry was heading to the island of Capri.

Neither of us knew much about Capri. I immediately thought of the Ford car, Mrs R thought of Capri pants, we both thought of Capri-Sun, those foil packed juice drinks that are impossible to open… but it was our only option.

We joined a ticket queue that moved so slowly it seemed like we were going backward. The hot mid-morning sun continued to beat down on us and we struggled not get grumpy with each other. 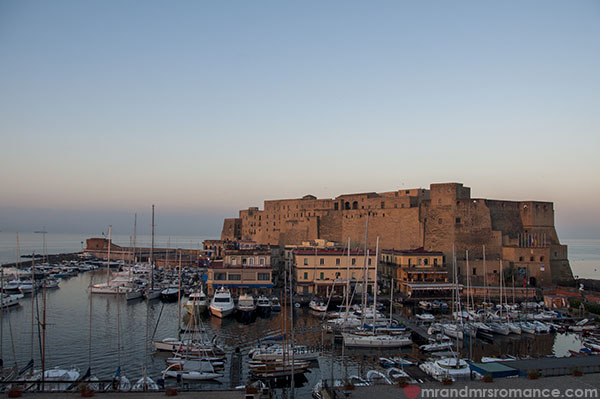 Our one small victory was when a guy thought he could hop the queue and was hauled out by the gun-toting Caribinieri, who shook him about and told him off. Great fun!

We really didn’t think we were going to make that ferry either, but somehow we bought tickets, found our boat and scored seats on the top deck. The place was crammed with tourists. It seems Capri is extremely popular with day-trippers to Napoli while their cruise ship is docked.

There were three cruises in Naples that day.

Dread settled in as it dawned on us that Capri – a small island – was about to become the busiest place on earth. Our dread was followed closely by regret – had we just wasted two ferry tickets and a day in Naples on this trip? Was this going to be some weird island theme park? Our spirits were pretty low at this point.

Thankfully, the views from the ferry were remarkable enough to cheer us up a bit. 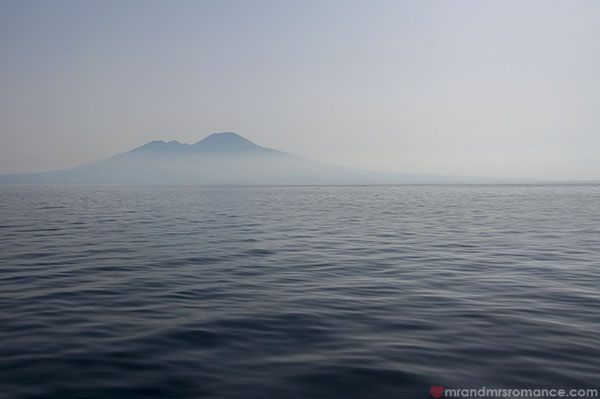 In the misty distance, Mount Vesuvius glowered and up ahead the coastline of Sorrento glimmered in the sun. Further out was our destination. Capri is a huge rocky outcrop towering out of the Mediterranean up to 589 m (1,932 ft) above sea level. 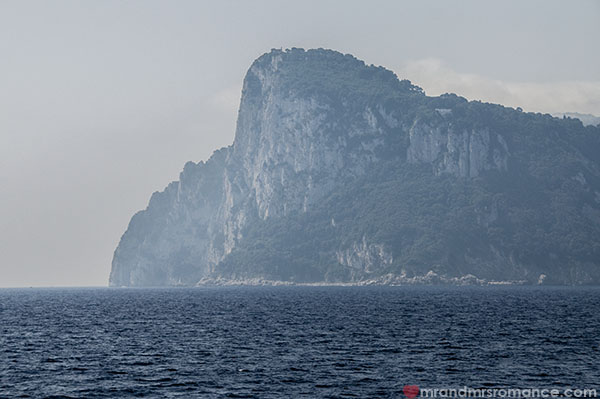 From its sheer cliffs and dramatic coastline to the multimillion-dollar yachts moored by the busy port and the gleaming white towns nestled in the creases of the looming cliffs – Capri was at last seeming like a good idea. 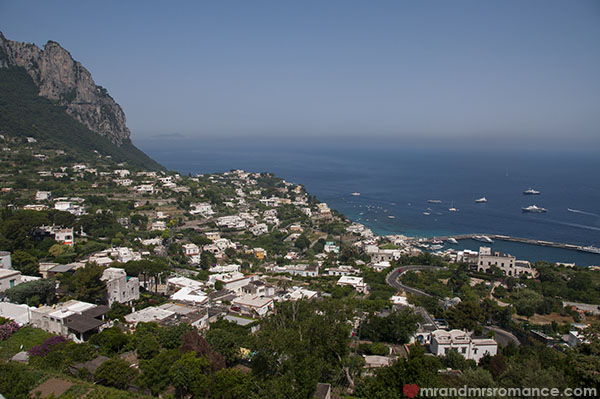 Then we arrived at the port.

Crammed with jostling people, no one knowing what to do or where to go, it was pretty bad. The cafés and bars along the front were massively overpriced. We felt like bait as the sharkish waiters grinned at us, trying to lure us to their tables.

We finally found an information kiosk and the initially surly clerk ended up being extremely helpful. On a map, he drew some walking paths we should take (even though it was about a million degrees outside!) and recommended the natural arch and the blue cave.

The blue cave is probably worth doing, but we didn’t have time this visit. You can hire boats right from the Marina Grande. From pictures we’ve seen it looks incredible.

The man also told us where to buy tickets for the cable car that takes you up to Capri town. Get the tickets just where you get off the ferry. Don’t join the queue for the cable car until you’ve got your tickets. There’s nowhere else to get them. 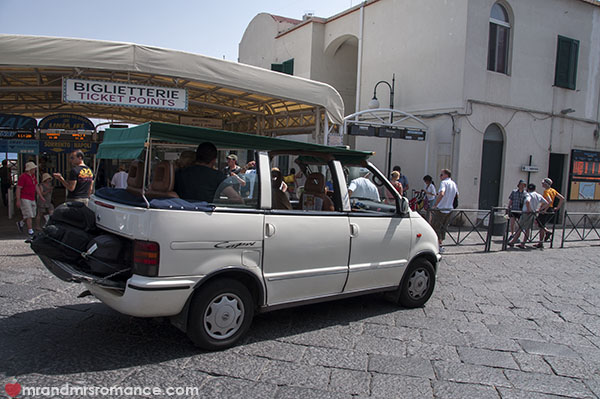 In Capri town, the crowds dispersed a bit and we were able to walk around a bit easier. We explored the heart of the island, avoiding the main piazzas where the tour groups convened. 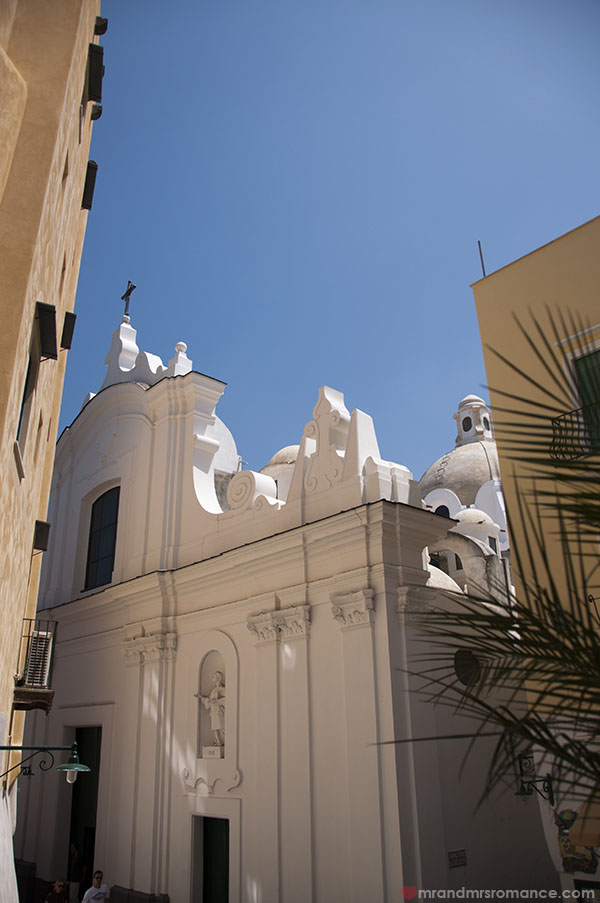 Along one narrow alleyway, we found a little shop tailoring shoes to order. We couldn’t resist and Mrs R came out with two pairs of made-to-measure shoes that have lasted for ages. The cobbler was a real character too. His family had owned the place for three generations. 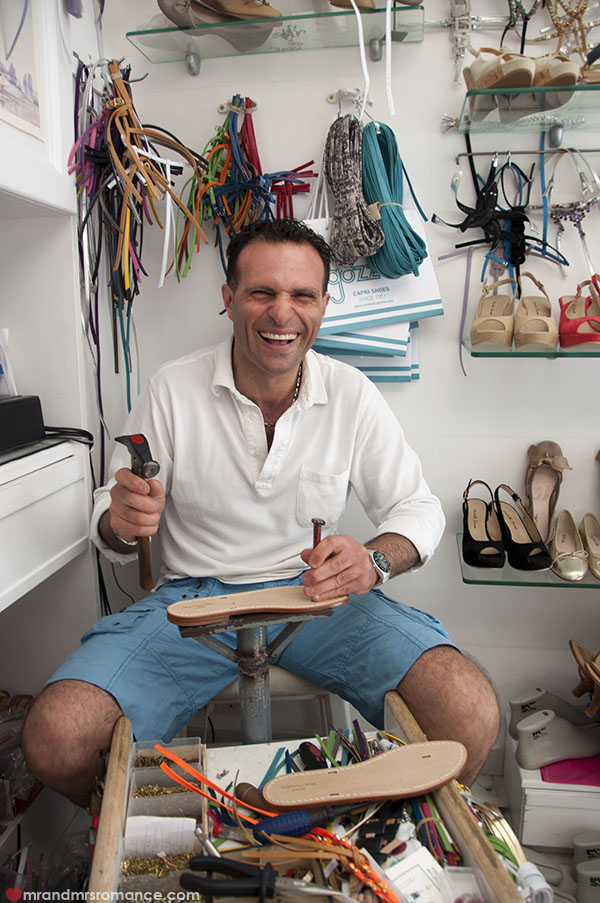 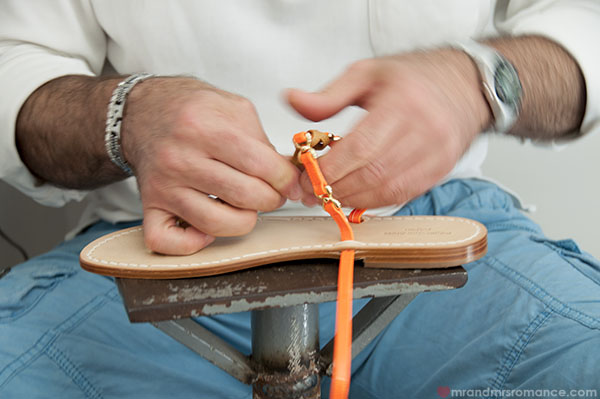 We carried on walking and found our way out of town heading south-east. We stuck to the coast and were rewarded with some ridiculous views. There are a lot of hotels along this stretch of the Via Tragara, which winds its pristine way right down to the south-eastern corner of the island. 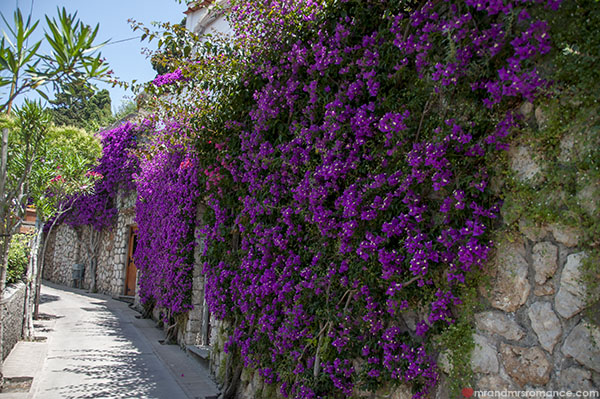 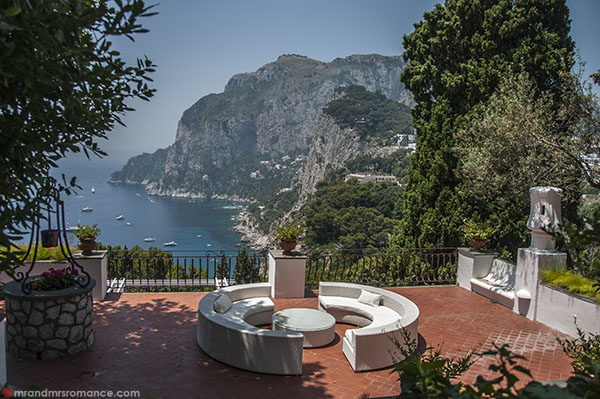 After staring into every lavish luxurious hotel we found, we came across a simple wooden sign pointing down to a little path. ‘Luigi’s Ristorante’, the sign suggested, was somewhere down there.

We were hungry and thirsty, and experience had taught us little beachside tavernas miles from town tend to be the best find of a holiday.

We weren’t wrong. As we descended the zig-zag path down the cliff, we caught glimpses of sparkling water, a little beach, a rooftop… then Luigi’s came into full view. 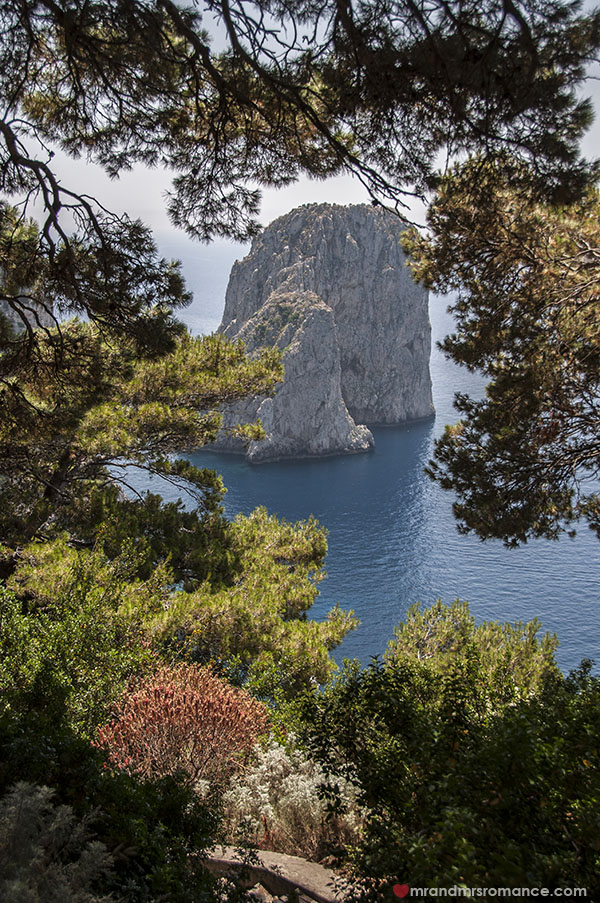 The restaurant overlooks a stunning rock formation called Scoglio del Monacone, which juts out of the water like a submerged mountain peak. It is the largest of the Faraglioni – an even more impressive collection of stone monoliths that stick out of the water up to 100m high. 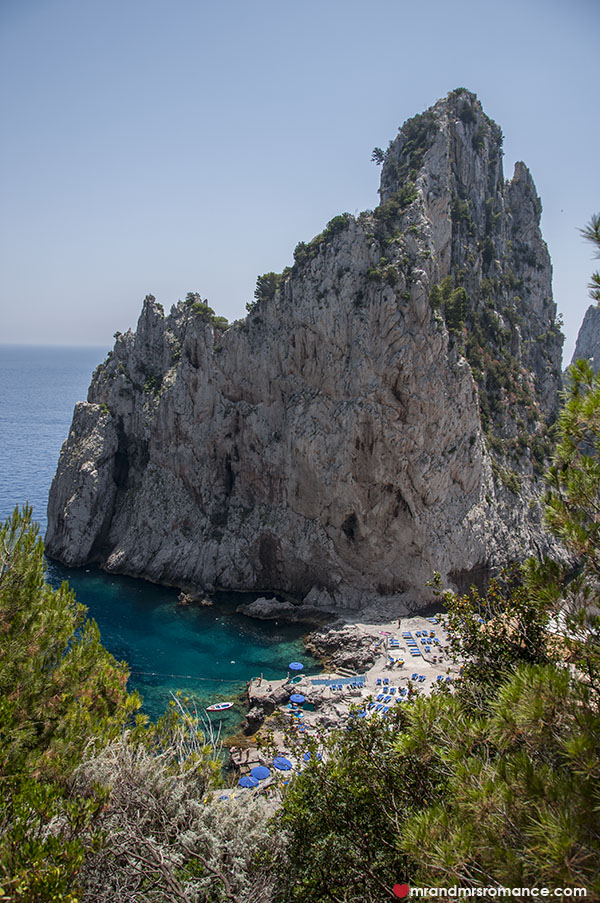 The three others of the Faraglioni, almost attached to the island, are called Stella, di Mezzo and di Fuori. Di Mezzo is the real name of the natural arch the tourist information man told us about earlier. We could see all of this from our table! 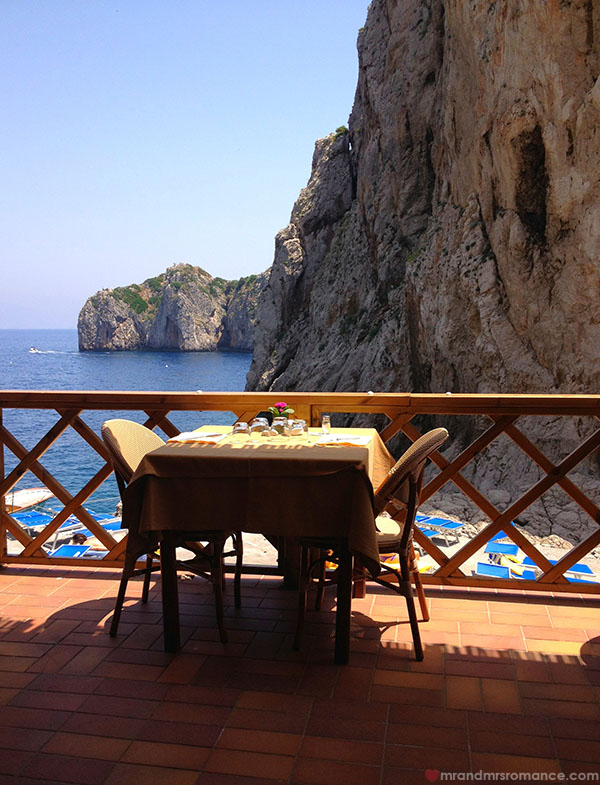 We were so overwhelmed, I can just about remember being seated and looking at the menu. It’s official: we were in the most amazing spot in the world. The menu there is predominantly seafood – as it should be – and the waiter will bring you a trolley of the catches of the day for you to choose from. 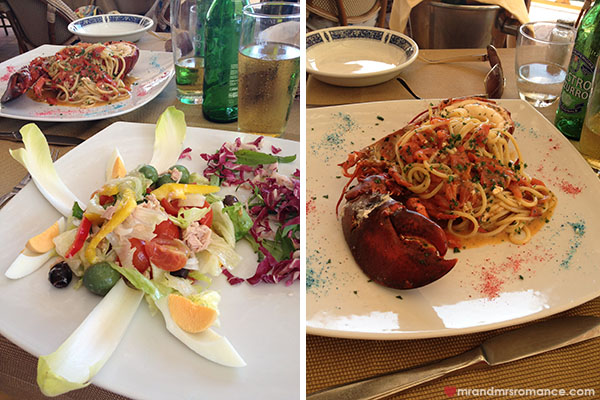 The service is impeccable and the venue is well disguised as a ramshackle beach hut.

Luigi’s – or Da Luigi ai Faraglioni – it turns out is a place where the rich and of celebrity come to escape. We had stumbled across a hidden millionaires’ retreat.

After lunch we were invited to enjoy the private beach as guests of Luigi’s. As with all Italian beaches, you need to pay for a lounger, which we did. Absolutely worth every penny. 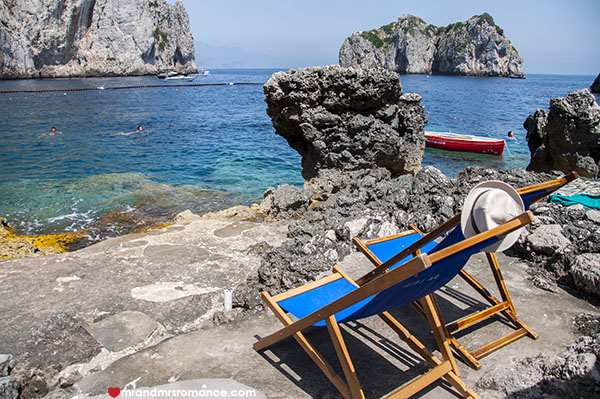 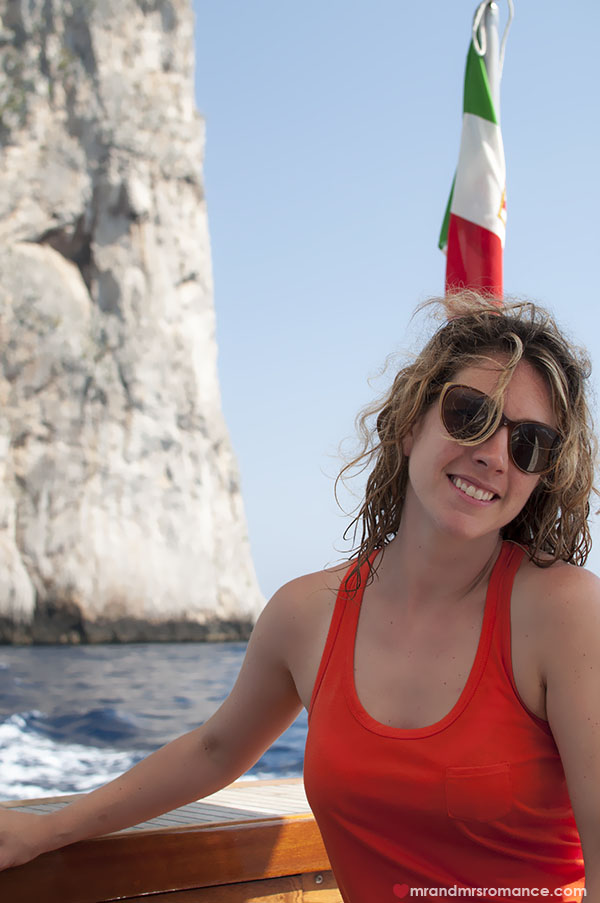 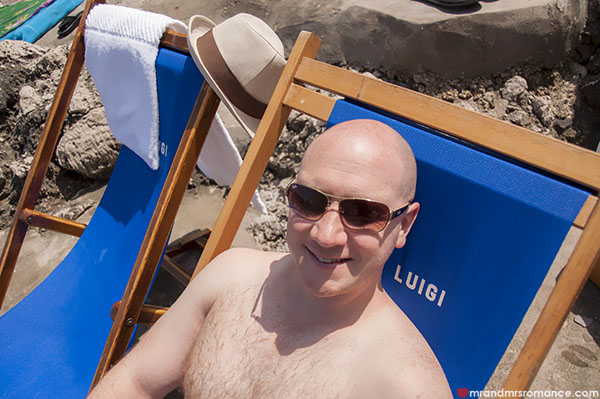 We reclined on our beach chairs and cooled down by slipping into the gently lapping sea, all the time the Faraglioni looked down on us like giant stone lifeguards.

When it was finally time to go, we braced ourselves for the march back up the hairpin path – back up the cliff to boring old normality.

It was then that we noticed the restaurant and hotel had a shuttle. Mrs R enquired and ten minutes later, we were climbing into a little wooden speedboat bound for Marina Piccola, which is the smaller port on the south of the island. 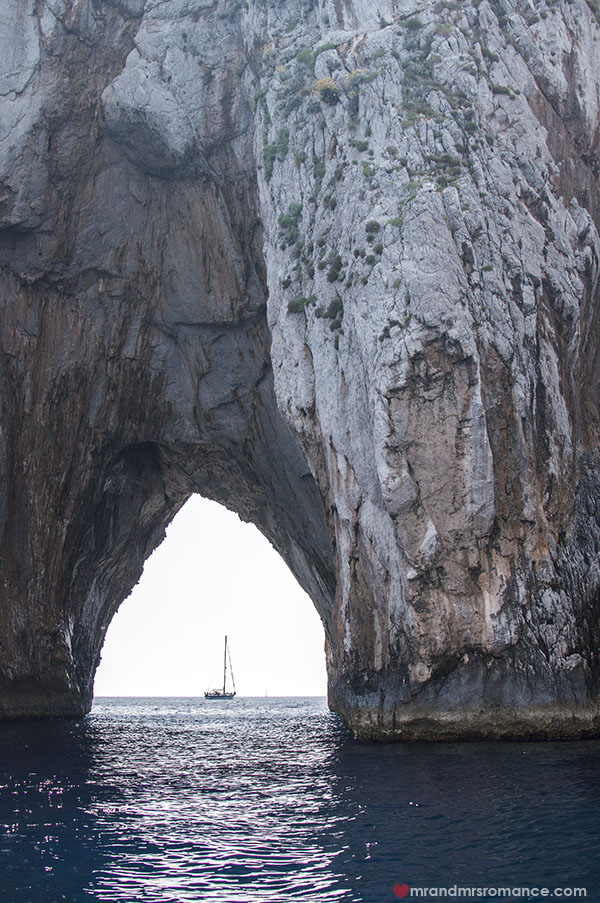 The captain even took us under di Mezza – something people usually pay to do! 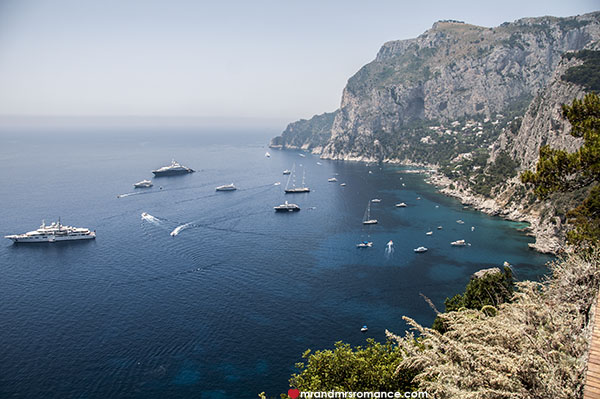 Our ride to Piccola was sensational. The views here, furthest away from the mainland, really showed how much money was floating around Capri. To our left, the luxury yachts and cruisers moored on this side of the island were enormous. 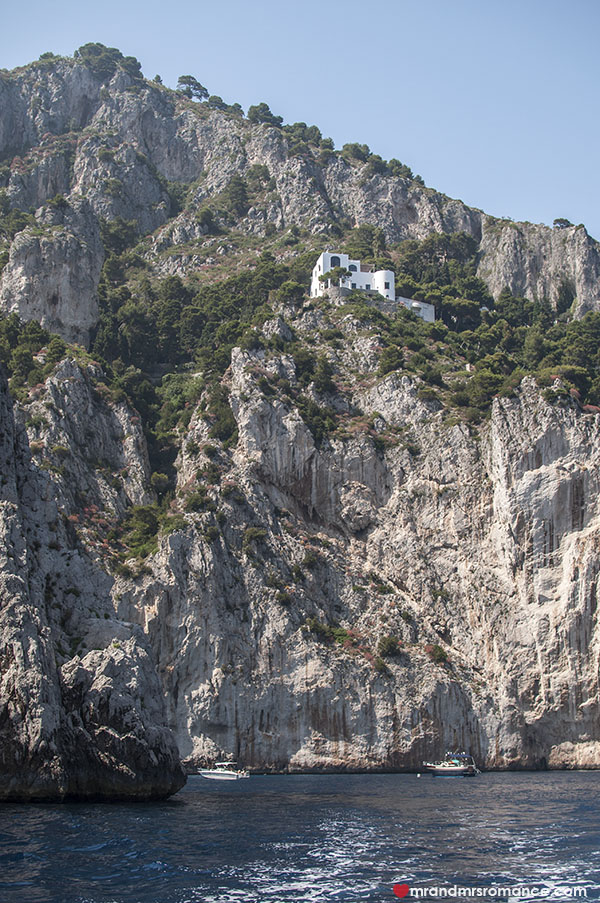 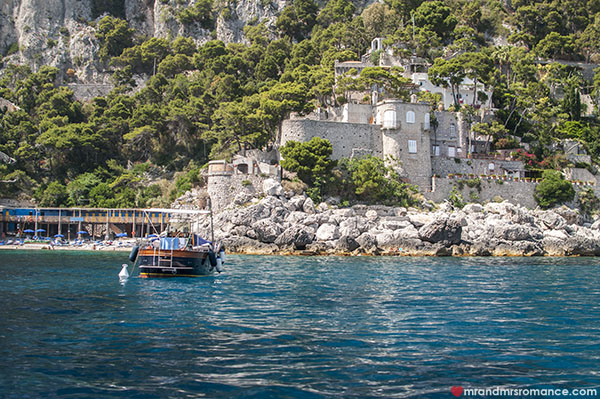 On our right, the towering cliffs revealed enormous palatial mansions perched on their tops, dwarfed by the sheer vastness and height of the rock face. 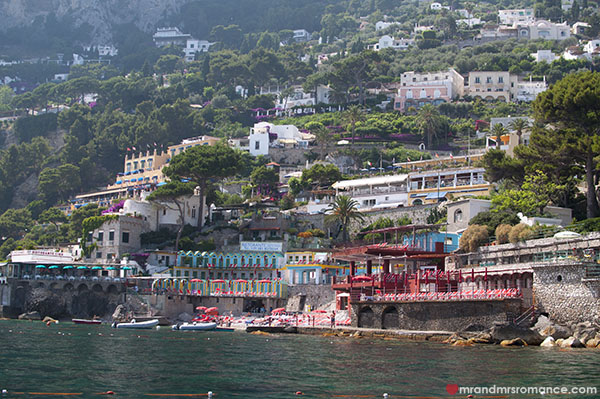 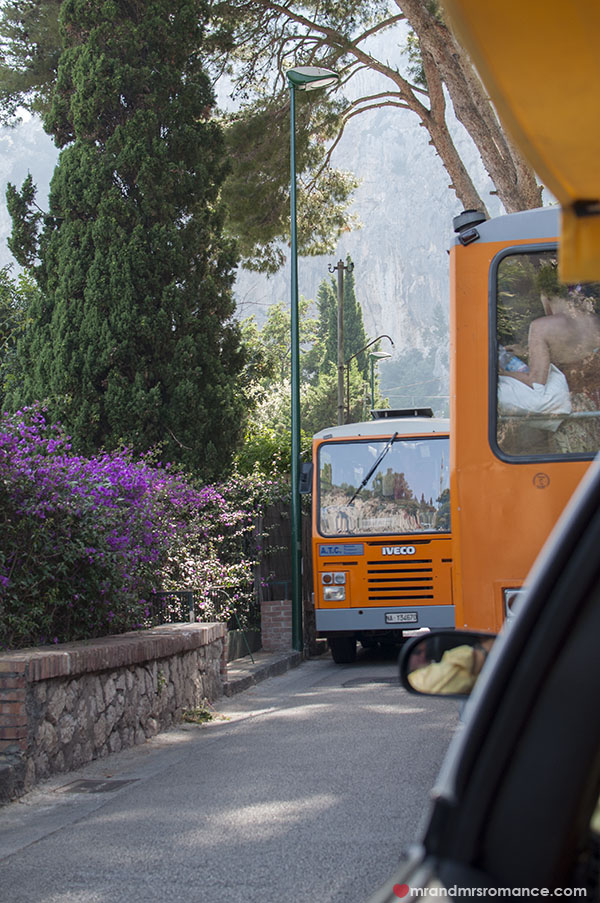 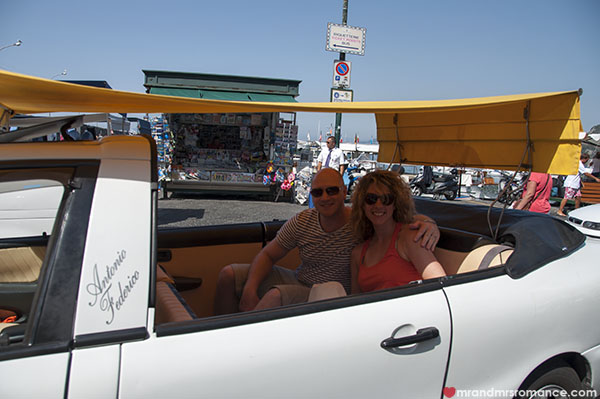 The taxis, on the other hand, are quite something. They’re all stretched limo style cars, but smaller, and they’ve all had their roofs cut off and replaced with a tarpaulin. This gives them a rather unusual but effective solution to the lack of shade in a convertible. All in all, they’re a very odd vehicle to ride in.

We pulled up to the Marina Grande on the north side cool, comfortable and feeling very spoilt. From there we hopped back on the ferry to dinner and our hotel on the mainland.

It was an amazing trip, and we wish we’d had enough time to stay the night there. Even the Hotel la Certosella isn’t that expensive if you think about it.

There are so many other things to do on Capri that we didn’t have enough time to do. The Blue Caves look amazing – there are regular boat trips you can take from Marina Grande. The other main town in the west, Anacapri, and the cliffs towards the westerly point would give amazing views. 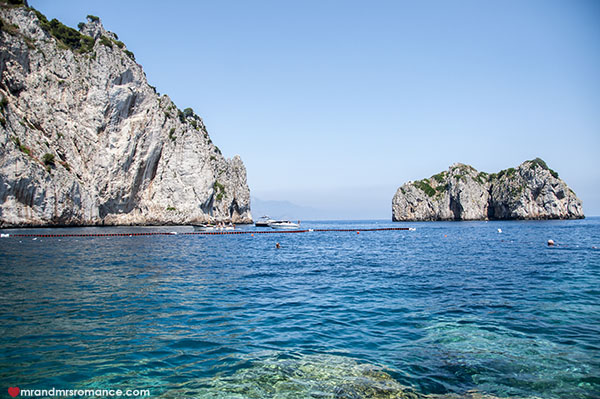 But one thing’s for certain – a trip to Da Luigi ai Faraglioni is an absolute must.

Have you been to Naples or Capri? What did you think? Tell us about it in the comments!

A Punch in the Head – Cocktail Romance with Crystal Head Vodka

Skulls. Cultures have used them symbolically throughout the ages. They can represent strength, wisdom and guidance, and survival through a difficult time. It’s probably…