How is it the middle of May already? 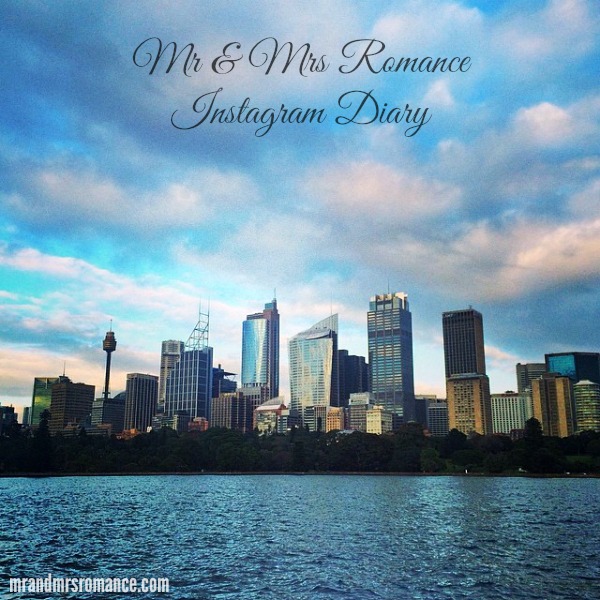 I mean, I must be having serious amounts of fun for time to fly by like this. It’s crazy! And not particularly fair either. Mrs Romance and I had all these plans for this year – looks like some of them will have to happen next year! 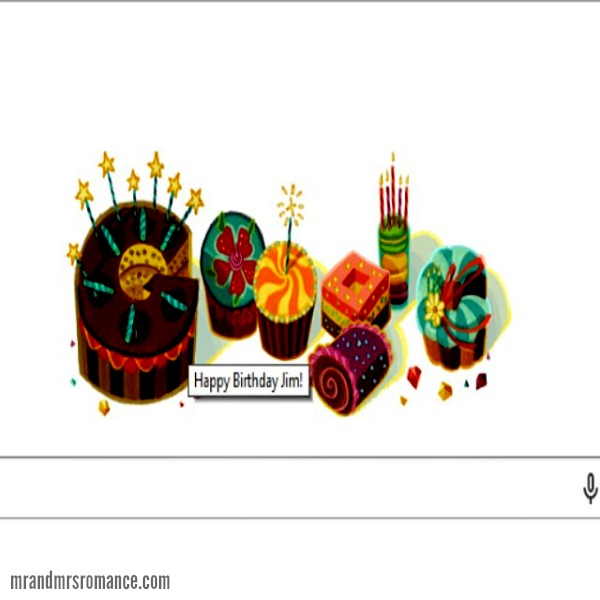 It’s about time Google gave me a bit of respect! A nice birthday wish is a good start. On the other hand, I’m still feeling a bit creeped out that the first birthday wish I get this year is from a search engine! I think I spend too much time on my computer! 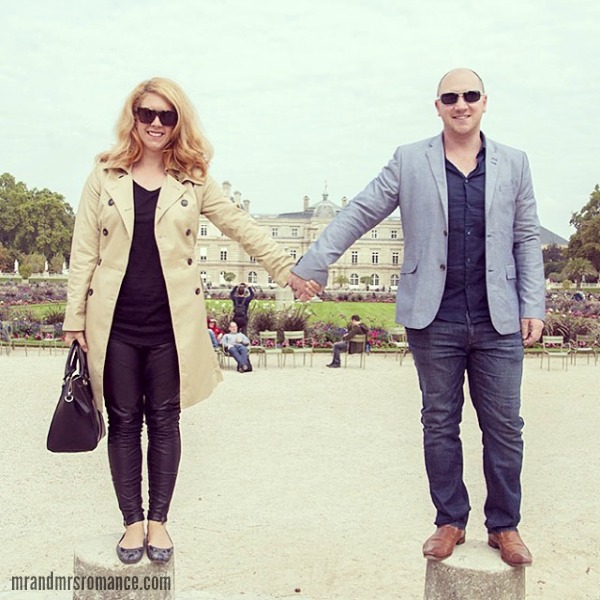 Mrs Romance has spoilt me rotten again this year, not only with some excellent presents, but also by wishing me a happy birthday on her Instagram account @hairromance. This pic was taken in Paris last year – unfortunately you can’t see quite how high these pillars are in Le Jardin du Luxembourg.

Unless you’ve tried it, you’ll never know the struggle of getting up there. Ah, the beautiful pain that comes from great art… look, it’s my birthday. I can waffle on as much as I want! 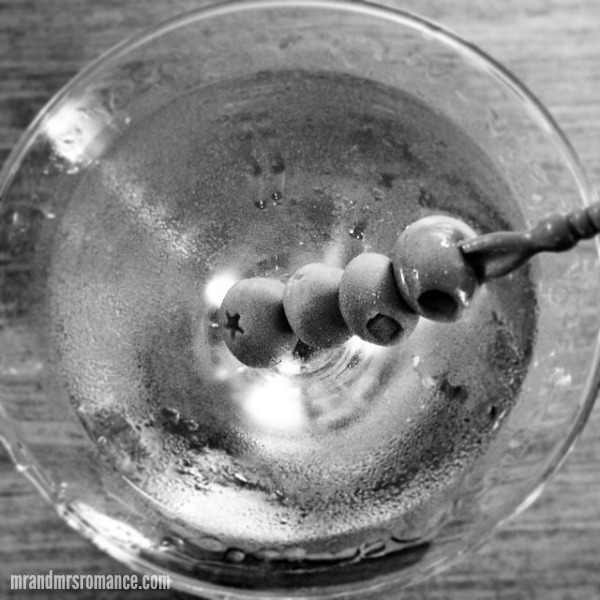 That’s right, four olives in my birthday martini. And in monochrome! I’m really spoiling myself today, aren’t I?! 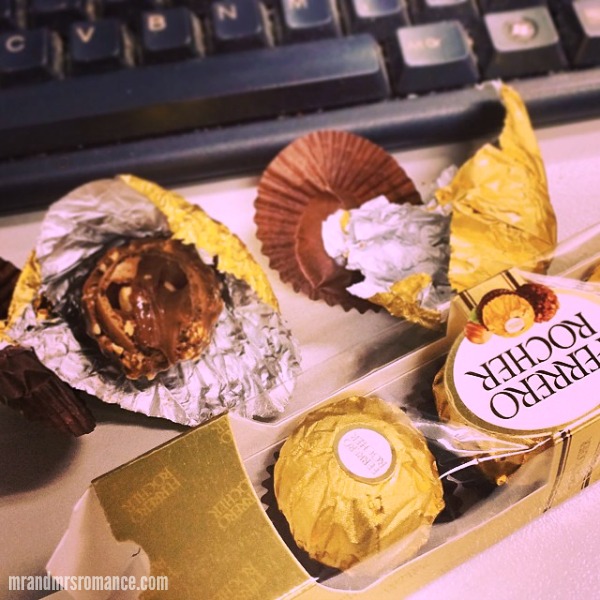 In the office one of my colleagues very kindly has given me a choc present. It’s also a particularly timely present as I’ve just been to the dentist and I’m starving hungry. The appointment was at 2pm and I don’t like to have lunch before I have someone digging around in my mouth.

These little fellas didn’t stand a chance. I did share one with another colleague though. Four Ferrero Rocher in a go isn’t total gluttony, is it? 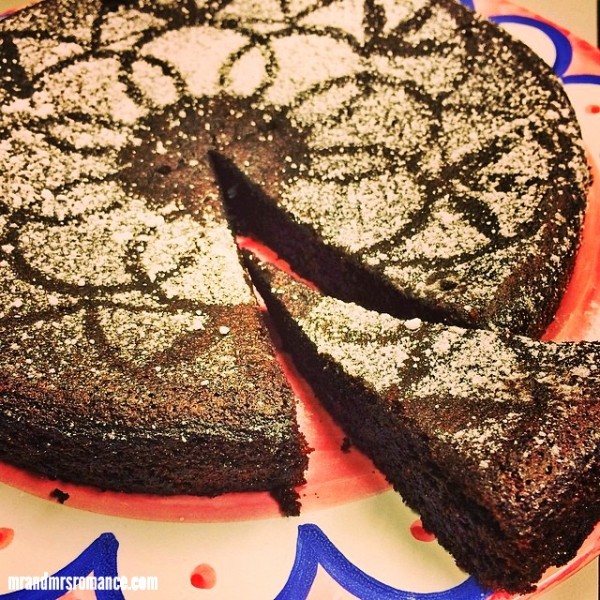 It turns out I could have saved at least some of those Rocher. My lovely friend and master baker (heh heh!) Sam from The Annoyed Thyroid has made me this awesome cake! It’s so tasty and rich. Sam also made it gluten-free bless her, so Mrs Romance can sample a piece. It’s going to take every ounce of my paper-thin will power to get it home unmolested! 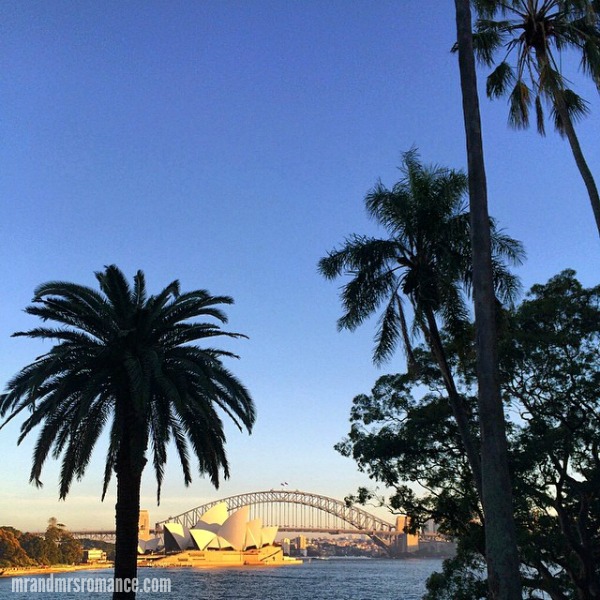 Mrs Romance makes it down to the harbour for the second time this week (first time was on Monday – check out the title pic for that one!) and snaps this beauty! I do love this time of year in Sydney. The mornings are bright but cool, the days can get quite warm but not boiling, the evenings are cool enough to need a warm blanket, and there’s virtually no rain. Can’t ask for more really! 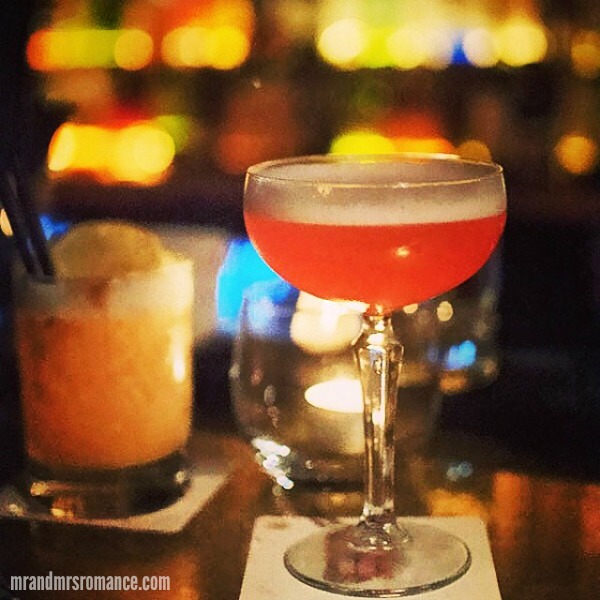 We’ve written about the Golden Age Cinema and Bar on Mr & Mrs Romance this week. This is such a great little place. It was a restoration project of three brothers, who have also developed a rooftop cinema and bar in Melbourne, and they’ve done a great job.

Previously the head office of Paramount Pictures, the old basement screening room has been re-installed and done up to be a 40-seat cinema where you can go and watch classic films. You can take your food and drinks from the bar into the cinema too. Very cosy, very cool. I think this’ll be our new haunt for a while! 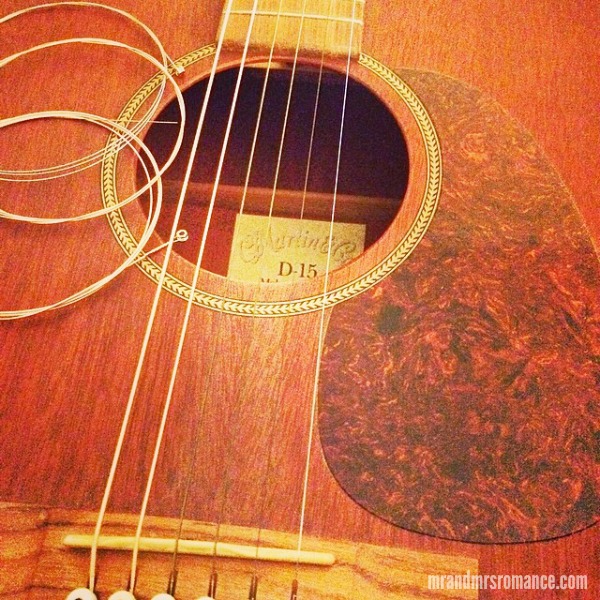 As you can see from how shiny three of the strings are, I’ve been meaning to restring my guitar for ages. Mrs Romance kindly bought me some new ones for my birthday. I don’t play as much as I used to – or as much as I should, but I still love putting new strings on my beautiful Martin D15. It’s an exceptionally good guitar and I never really feel worthy of playing it let alone owning one! 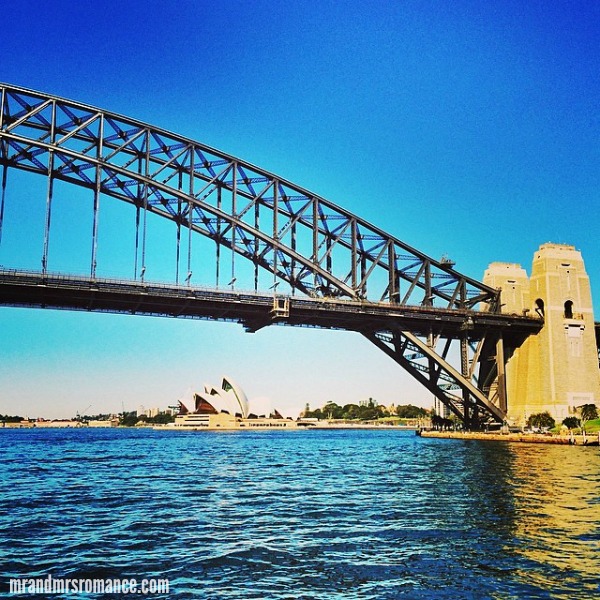 It’s the Mr and Mrs Romance Big Fun Dau Out today! We’re off to the Biennale art exhibition on Cockatoo Island. We try and get to this every time it’s on. As you can see, when it’s a nice day, the ferry ride out to the island is beautiful. 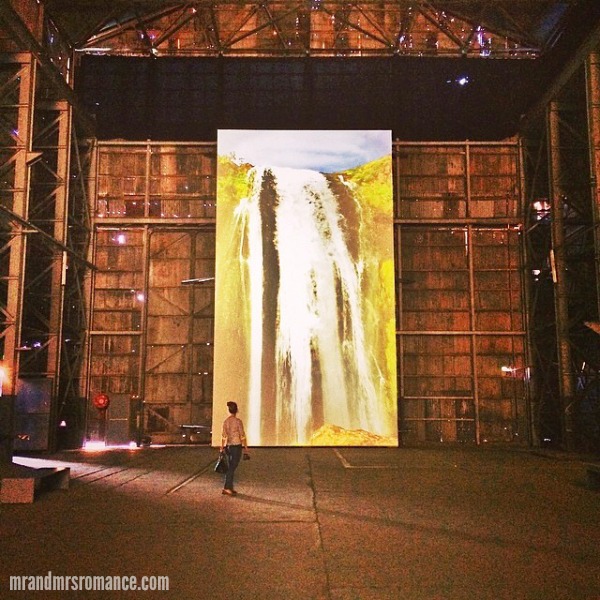 One of the coolest pieces this year is this giant video projection of a waterfall in Iceland. It’s also got the roaring noise from the waterfall, which is so loud it sent Mrs Romance into a bit of a tizzy standing so close to it. But the effect is amazing. 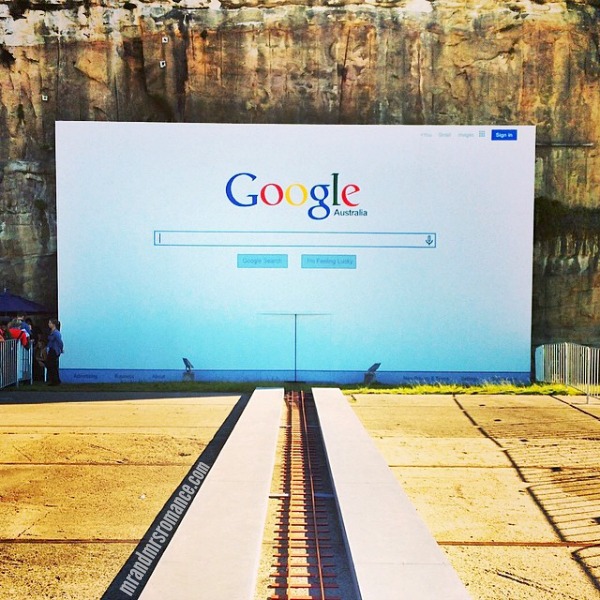 Through the dogleg tunnel this year, they’ve installed a Google ghost train. You have to get there at about 11:30 when they’re giving out the tickets, but you can wait around to see if anyone isn’t going to turn up. 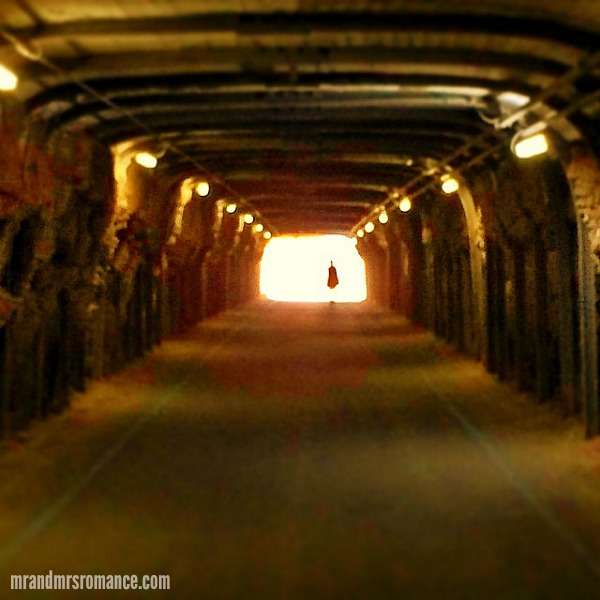 This is Tunnel Number 1 (I don’t know why they’ve called it that – there’s no Tunnel Number 2 here!) and it’s great for perspective shots. We’re halfway down when the alien visitation happens.

This has to be one of the best public art exhibits in Sydney (this and Vivid Sydney, which starts in a couple of weeks). It’s lots of fun and – even better – there are loads of very very cool pop-up bars and restaurants all over the island. It’s almost worth going just for lunch and a cocktail! 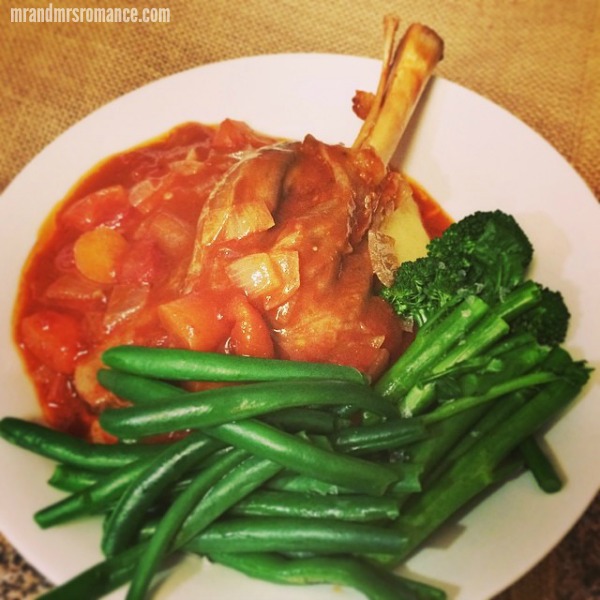 It’s been a busy day out and about. I decide a hearty meal is called for. The only option: lamb shanks and creamy polenta! Sadly we start cooking a bit too late and get peckish, so the two and half hours at 150dC isn’t quite long enough for these big ol’ sheep shins.

Thankfully, my foresight has come to the rescue and the other two shanks stay in the oven for another two hours. They’re sitting in that rich tomato, white wine and brandy sauce right now, waiting patiently in the fridge for Sunday night and the lime light! Can’t wait! 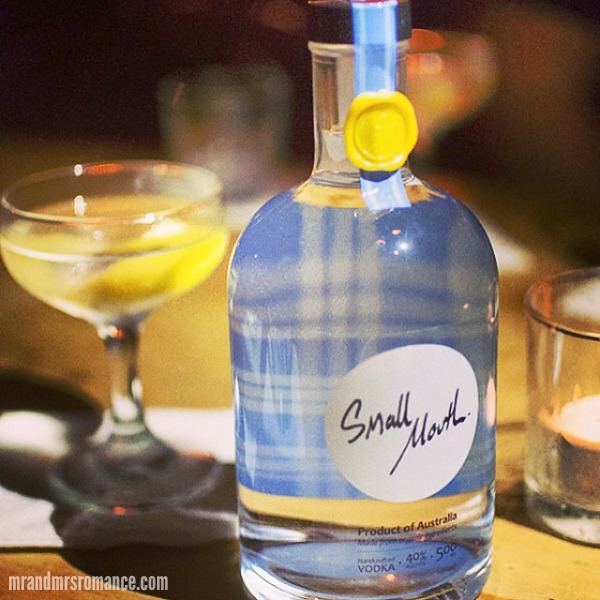 We got to give this little beauty a run-out the other day: Small Mouth Vodka. It’s distilled in Sydney by a couple of guys – Rohan and Chris – who just really wanted to make a decent vodka that a) doesn’t burn your mouth off, b) tastes and smells of something (in a good way!) and c) isn’t some over-consumed, mass-produced imported cocktail extra.

Their results are excellent! Small Mouth does pretty much what Chris and Rohan set out to do. They challenged us to compare our old favourite – a gin martini – with a vodka martini made with Small Mouth. I’ve got to say I was apprehensive. But I needn’t have been. Their vodka is silky smooth, full of flavour and a 10/10 from the both of us.

I can’t say we’d replace this for our gin martini, but it’s definitely an either/or/and option if we had the choice!

Here’s our full write-up on Small Mouth Vodka and one of the bars around Sydney selling it: Stitch Bar on York St. 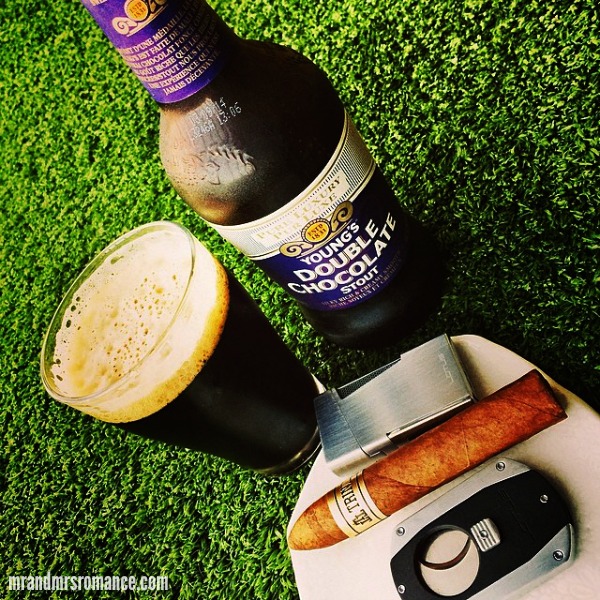 It’s a chilly afternoon so I thought I’d warm myself up with a nice cigar and a bottle of double chocolate stout I’ve been saving. I’m happy to say it was a good choice! It’s also given me the chance to get ahead on my book: I’m reading the Game of Thrones books – highly addictive and quite different from the TV show. 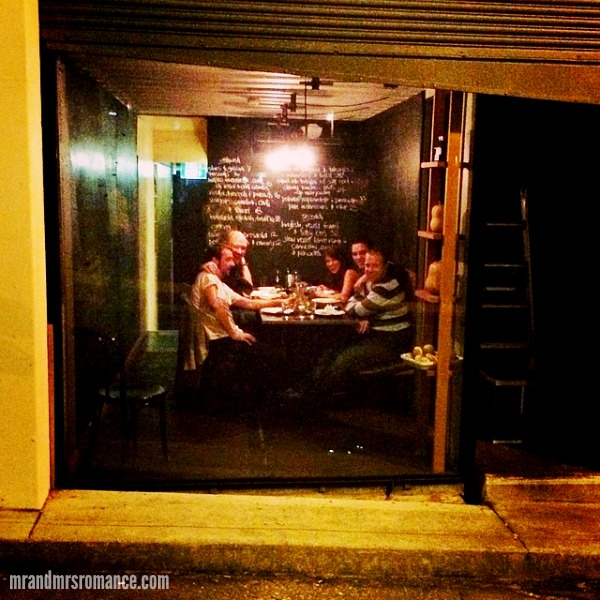 We’re out for dinner tonight with some great mates. We manage to get a table for the seven of us at Vini – a tiny Italian restaurant in Surry Hills. You can’t book, so we’re really impressed with the private room at the back of the venue. It’s big enough to hold ten people and feels like a converted truck container or an old loading bay. The glass wall facing onto the lane way is so cool. It feels like you’re eating outside but not at the same time.

We’re out not only to celebrate my birthday but also one of my best mate’s too. His is the day after mine! I don’t think it really matters that our birthdays were at the beginning of the week. 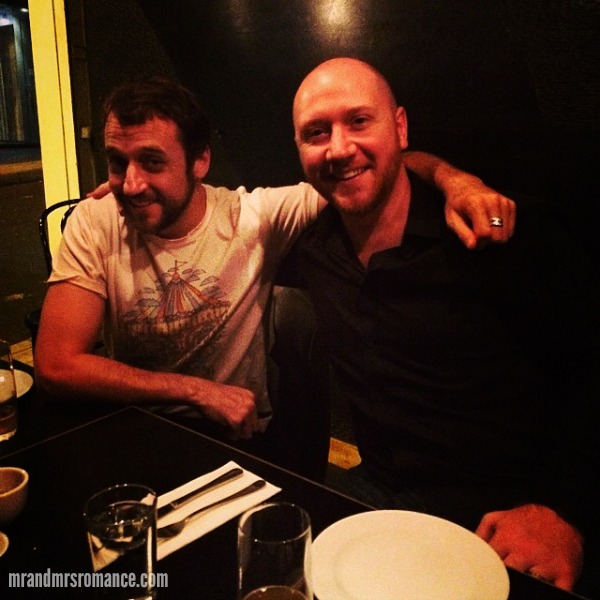 How was your week? Tell us all about it in the comments!

What does romance mean to you? Carly Jacobs from Smaggle.com

We ask our lovely friend Carly from Smaggle.com what does romance mean to her. Get ready for some enlightening, funny and insightful answers to…