Small Mouth Vodka is the pioneer vodka brand in Australia. A far cry from the flavourless, odourless, throat burning, mass-produced imports we’re used to here. Small Mouth is amazingly smooth – only gently warming your tummy as it goes down. 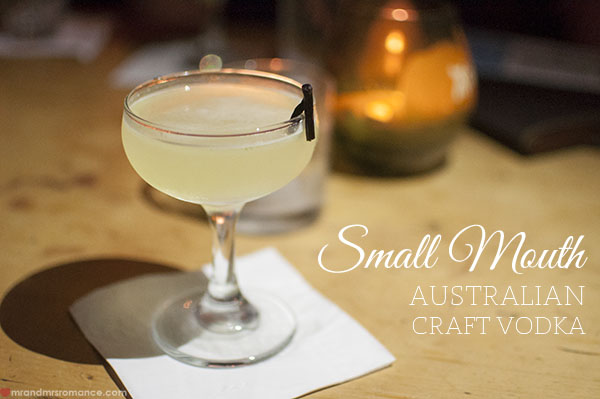 Can anyone explain to me why France is suddenly producing one of the most expensive vodkas on the market? I don’t get it. Isn’t it a Russian drink? And does the high price tag of Grey Goose suggest the best quality or just the best marketing?

Of course there are different quality vodkas out there, I appreciate that. I have an oddly clear memory of the time Mrs Romance and I drank ‘Strongoff’ vodka. We were with my cousin in Scotland for December 31st one year.

Everything else had been drunk and all that was left was this bottle of Strongoff and a plastic bottle of lemon juice. It was terrible.

Having said that, I still wouldn’t be able to say what a good vodka tasted like. That revelation only came a few days ago. 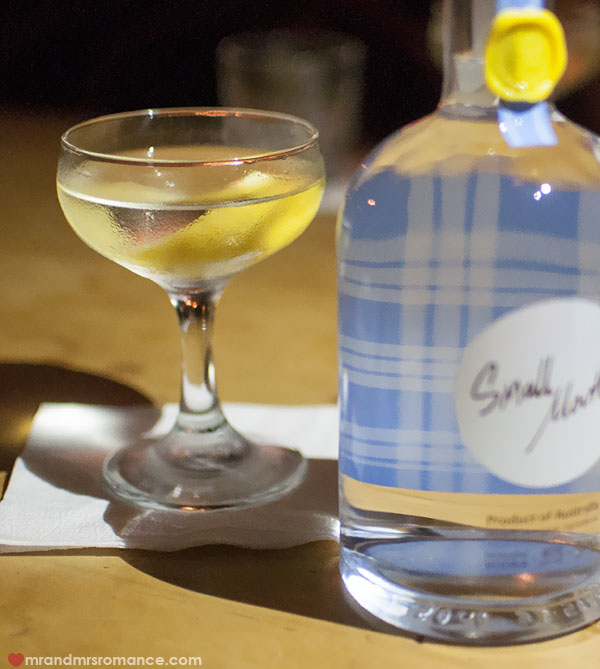 Meeting the two guys running Small Mouth Vodka – a little Aussie craft vodka distiller – certainly cleared things up for me. Hand-crafted, copper pot distilled, small batch vodka. Tasting this stuff put pay to the myth that vodka doesn’t really smell or taste of anything, and just burns the crap out of your throat.

Even though co-owner of Small Mouth, Chris, told me to smell the vodka before I tasted it, I almost just slugged it down. Old habits die hard!

But the caramel vanilla aroma was quite a surprise; and when we tasted it, the vodka was silky smooth with a slightly salty savoury flavour. It didn’t burn my mouth as I was expecting it to and the aftertaste lasted a long time after – a light, citrusy flavour.

The reason we were meeting with Chris and Rohan – the founders of this little Sydney-based vodka – was because they’d challenged us and our love of a gin martini! Now, that’s a gauntlet we just can’t ignore – especially as we’re now huge fans of Aussie craft gin!

So Ryan – the master mixologist in Stitch Bar, York Street – brought us our drinks. Very dry, merely kissed with a touch of Noilly Pratt vermouth, and garnished with a thick slice of lemon peel, the citrus elements of the Small Mouth Vodka leapt out of the glass at us. 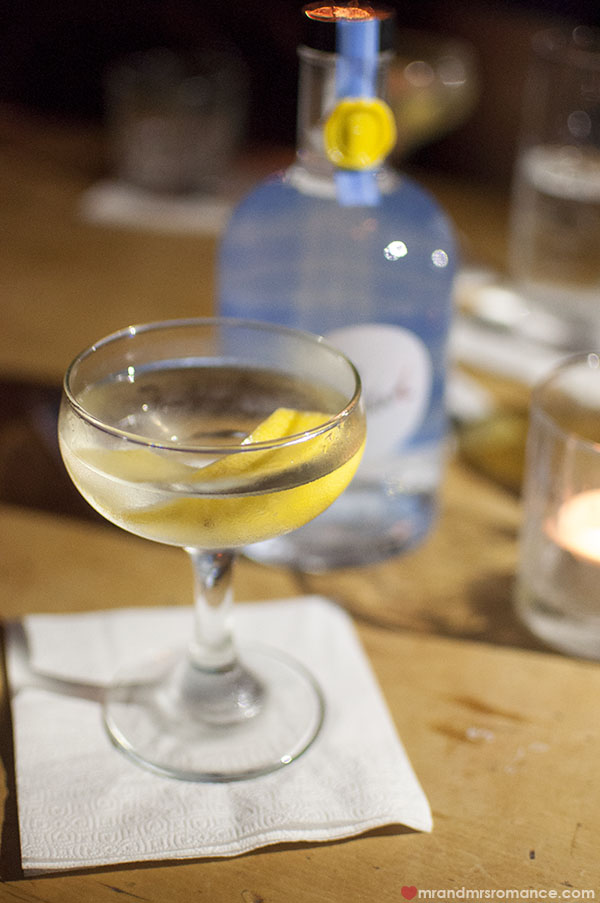 Vermouth is usually used to take the edge and the alcohol burn off the martini spirit. But because Small Mouth is already very smooth, the vermouth here just added a little extra flavour. It was certainly an eye-opener. Do we prefer a vodka martini over a gin martini? Tough call. If it’s Small Mouth Vodka, perhaps it would. But we still love our gin!

Next, to showcase the other flavours in the vodka, Ryan invited us to try a new concoction Stitch had created especially for Small Mouth. Whatever Ryan’s decided to call it (he hadn’t made one up yet), you have to try it. All four of us – Rohan and Chris included – were floored by how well the flavours combined.

The vanilla sugar and vanilla bean paste in the drink brought out the aroma of the Small Mouth, while the lemon juice lengthened the drink and added to the citrus aftertaste. But strangely, if this cocktail were made with any other vodka, it wouldn’t taste as good. It’s a bloody stroke of genius, so next time you’re in Stitch, ask for one!

Stitch, by the way, is an incredible little bar. As Small mouth is a forerunner for craft Aussie vodka, so Stitch is one of the first small bars to open up in Sydney city. The speakeasy feel of this basement bar, the cool groove the music makes and the exquisite drinks on offer make this a prime local drinking spot. The food doesn’t look too bad either. 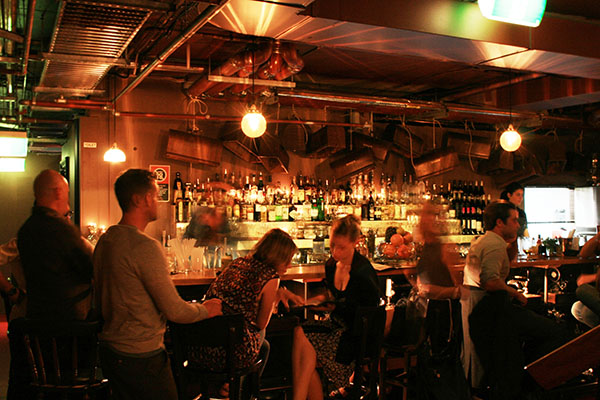 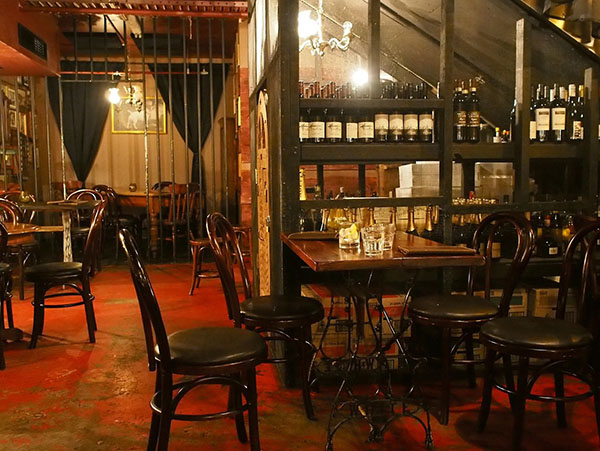 Find Stitch Bar by keeping your eye open for a couple of old sewing machines in the most inconspicuous doorway on York Street you can find. The stairs lead down!

We were totally enamoured by Small Mouth Vodka. Its complex flavours and aroma have completely changed our mind on what vodka is. It’s no longer just a cocktail mixer to make the drink stronger. When it’s made right, it becomes a whole different copper kettle! 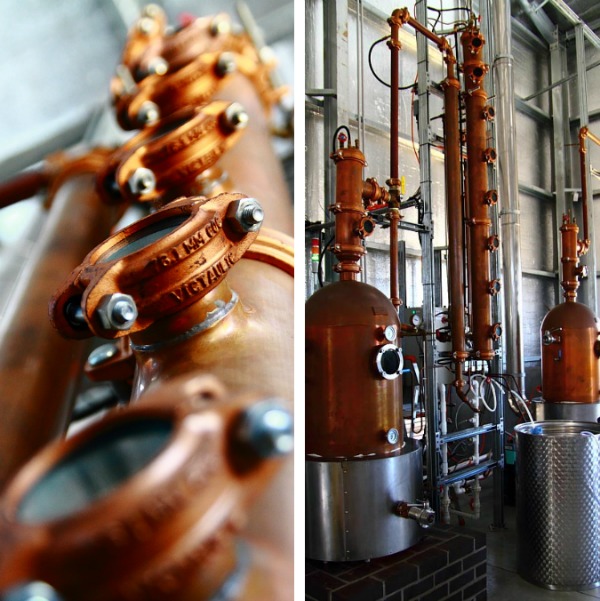 Oh, and why ‘Small Mouth’? While Chris and Rohan were travelling around the UK a few years ago, they drove past an angry muttering Scotsman on a bicycle, whose mouth had become so small in his fury – perhaps he’d just had a glass of Strongoff on his way home!

It became an in-joke and now they’ve applied it to their brand, rightly announcing ‘a small mouth doesn’t have room for just anything’! And it works well. Small Mouth uses no preservatives, additives, colours or flavours, is 100% organic and uses reverse-osmosis filtered rain water for goodness sake! This stuff’s virtually a health food!

So the next time you’re in a bar, ask for Small Mouth Vodka – it’s like no other vodka you’ve ever tasted. If they haven’t got it, ask if the bar can order it in. Believe me, you’d be doing yourself and the bar a favour! 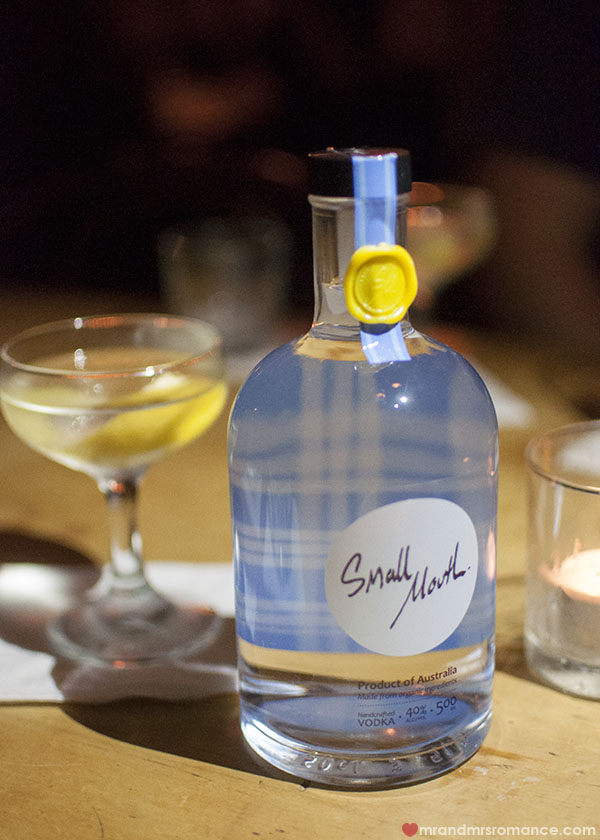 Stitch Bar is among the several bars across Sydney serving Small Mouth. It’s at 61 York Street and is open Mon-Wed 4pm – midnight, Thur & Fri midday – midnight, and Saturday 4pm – 2am. They’re on Yelp! if you’re still having trouble.

Do you have a favourite vodka? Have you tried Small Mouth? What do you prefer – a gin or vodka martini? Tell us in the comments!

Images by Mrs Romance, and courtesy of Small Mouth Vodka, bartours.com.au and sunsetpeninsular.com.

How to beat the queues at the Empire State Building

I love New York. But I hate queues. Like the Brits, Americans seem to really enjoy a queue. It must be the Italian in…