The Golden Gate Bridge, Alcatraz, big hills with cop cars bouncing after villains – San Fran has it all. Here we go with our US trip in Instragram fun! 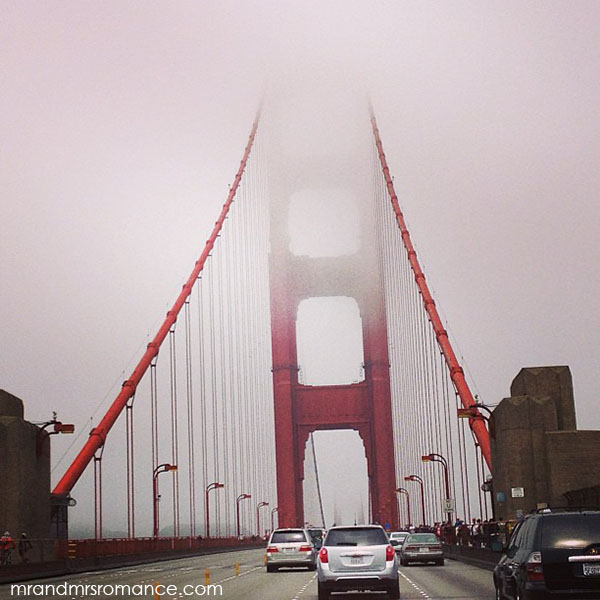 Look how happy Mrs Romance is as she leaps aboard an empty tram and attempts to steal it. We didn’t end up riding the old style trams as it was really hot and the queues were over an hour long. 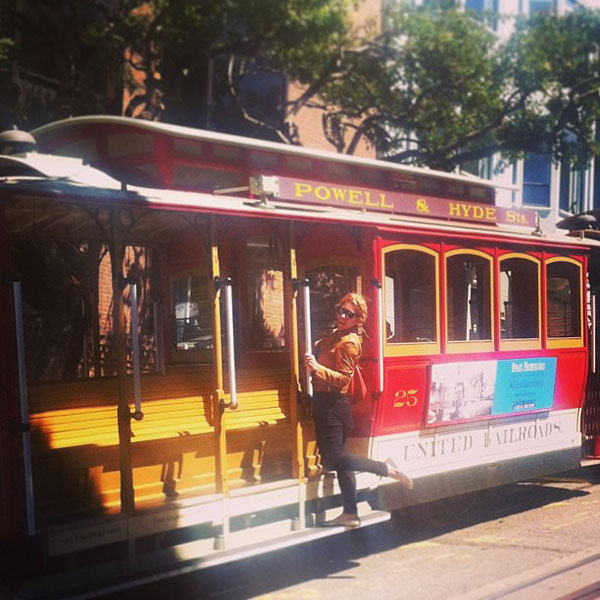 Instead we went up the road a bit to where they park the trams (because they want to have hour-long queues, right?!) Hop on the side rail and snap away – just be careful of cars going past. 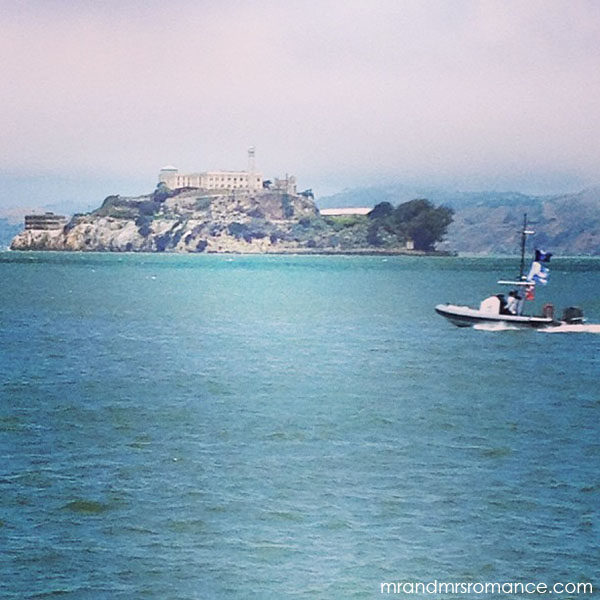 Alcatraz. Its name chills you to the bone and looking out at it across the bay thinking of the poor souls stuck there is even worse. They say that the inmates could even hear the free people on the mainland having fun from across the water. 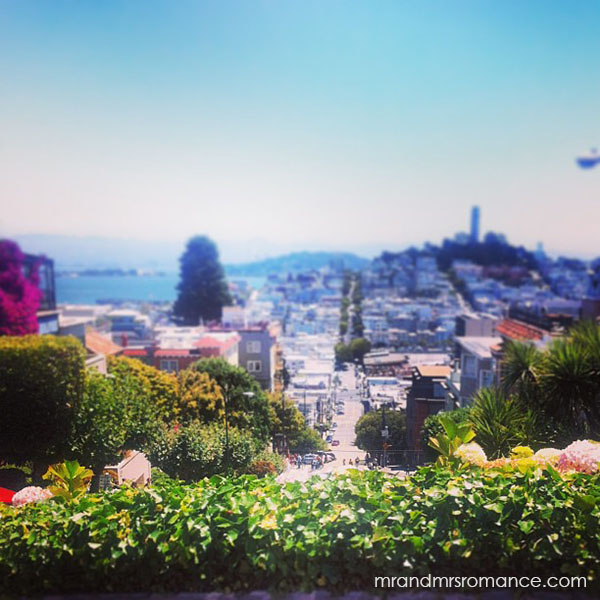 One of those classic San Fran street scenes – dead straight and very hilly. Mrs Romance liked the shrubbery here too! 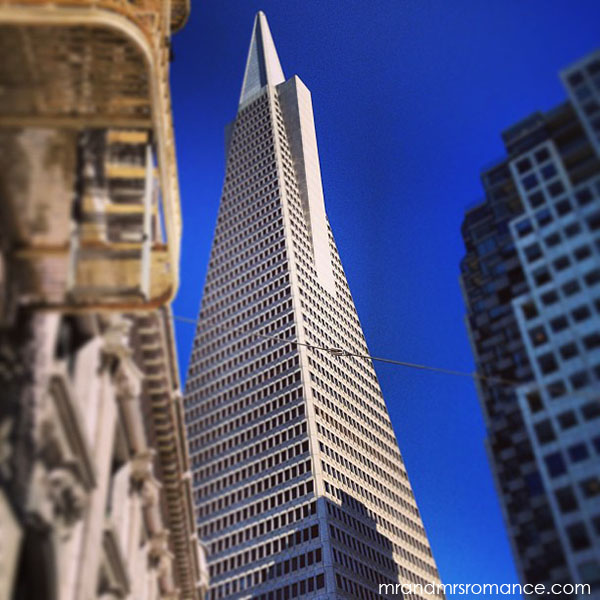 The TranAmerica building is like a compass needle that pokes out of the otherwise relatively low San Fran skyline. If you ever get lost, which is pretty hard to do in San Francisco, just look up and you’ll see it leading you towards the financial district. 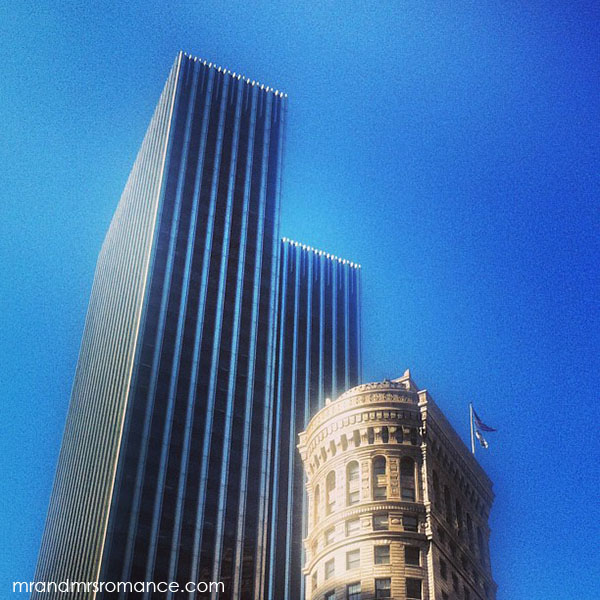 Like a lot of American cities, SF has some cool architecture – old and new right next to each other. Juxtaposition I believe it’s called (just wanted to use that word)! 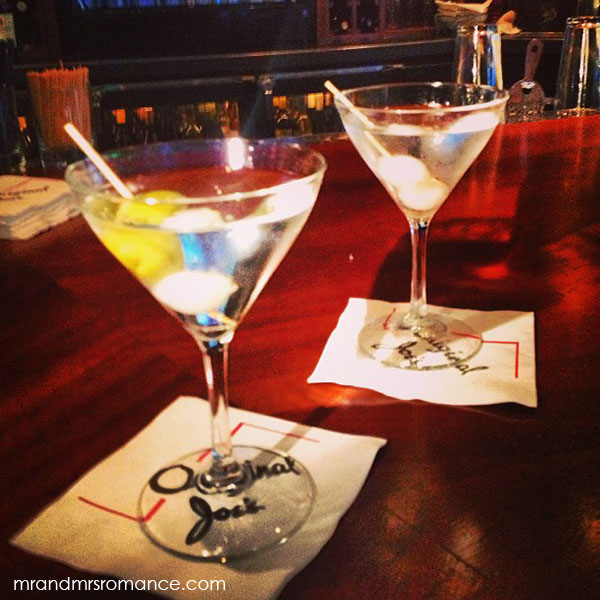 The beginning of what would be an epic night out in the city with our lovely friends Melissa and Peter. These are two excellent martinis using 209 gin. It’s locally distilled and is very drinkable. Too drinkable in fact, as we found out the next day!

This was at Original Joe’s in Little Italy. Go there. It’s AWESOME! 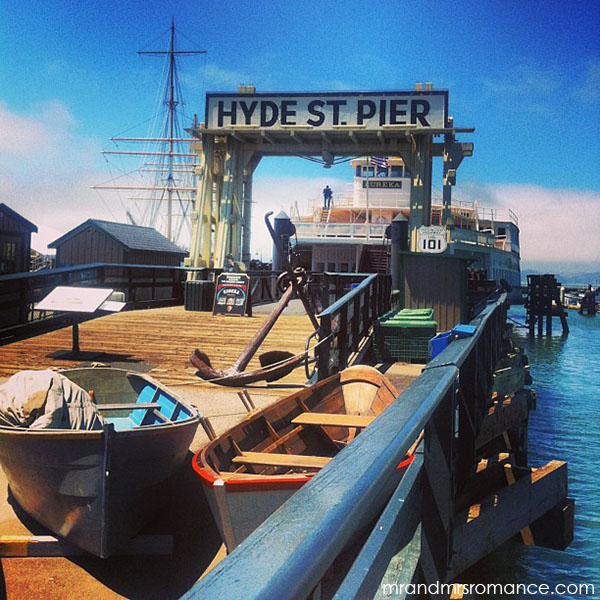 Back down by the waterfront, head to the piers and check out the ships and the bay. It’s a great way to spend a day. 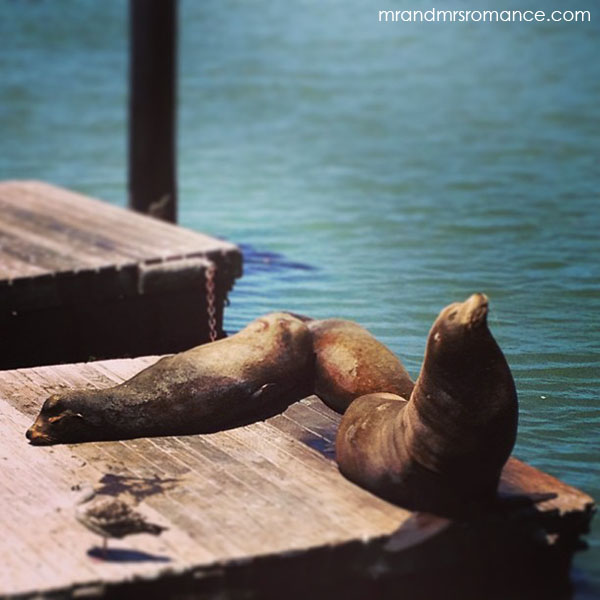 Pier 39 has a few resident sea lions. Normally there are hundreds here, but during the warmer months, they head to cooler waters. I guess we found the only sun-worshiping sea lions around! 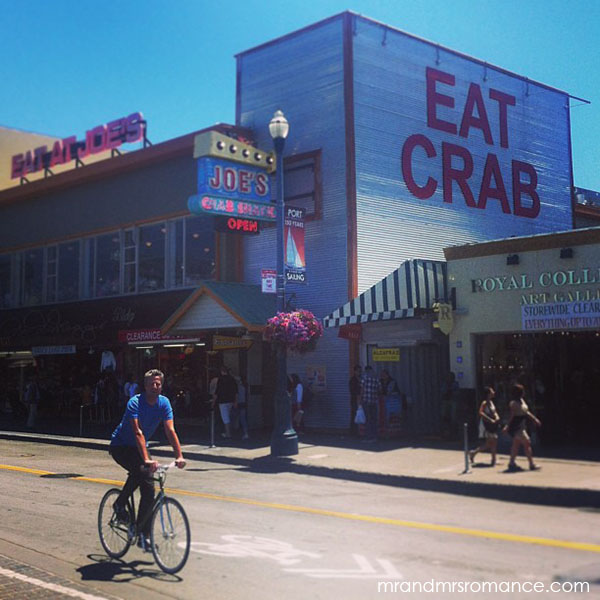 Take my word for it, do as the sign says. The pier area is famous for its crab, and also its clam chowder. 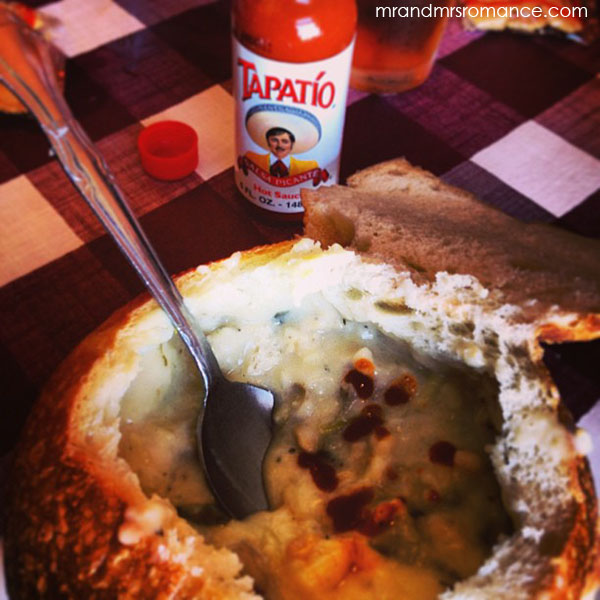 My clam chowder was so tasty. It comes in a bread roll – as you can see. This was at Nick’s Lighthouse. The places around here are pretty touristy, but it’s fun and the food is none-the-less delicious. 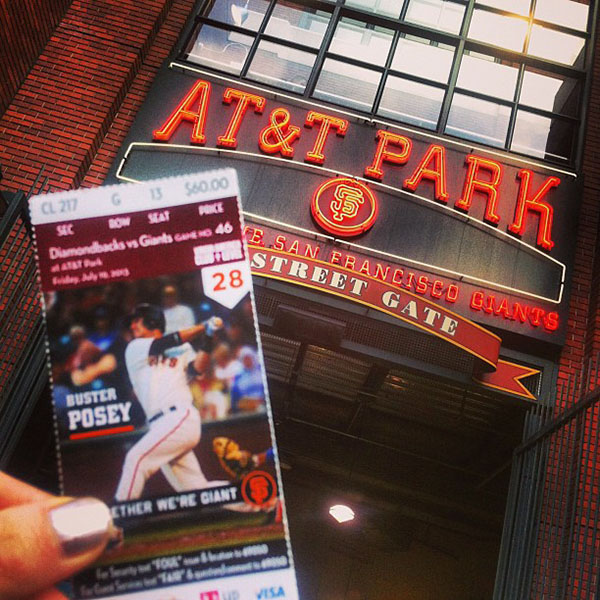 We are now officially Giants fans. This was our first ball game and we really enjoyed it. Thanks to Peter and Melissa, and their knowledge of the game, we almost understand it now! 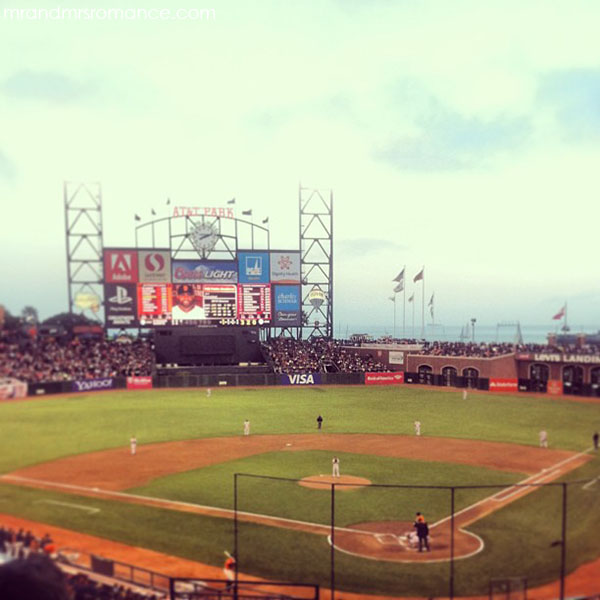 The Giants smoked the Diamondbacks 3-0. It was a close game. 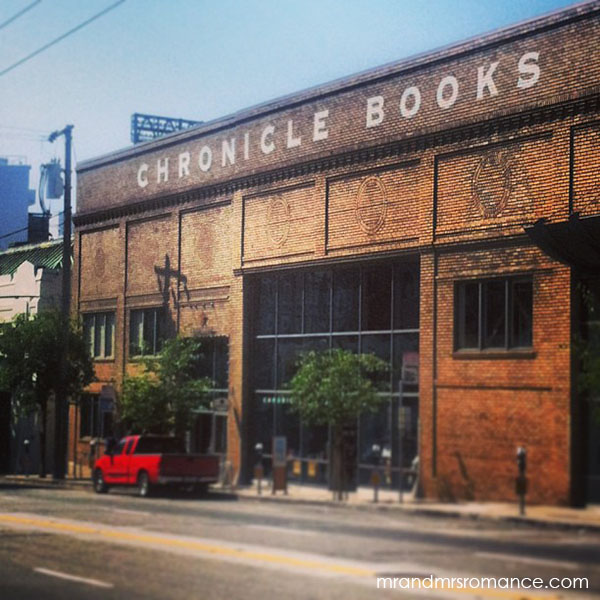 Another lovely building in San Fran – and also home to Mrs Romance’s publishers! Chronicle Books will be bringing out a hair book by Mrs Romance (aka Hair Romance). Stay tuned for more details! 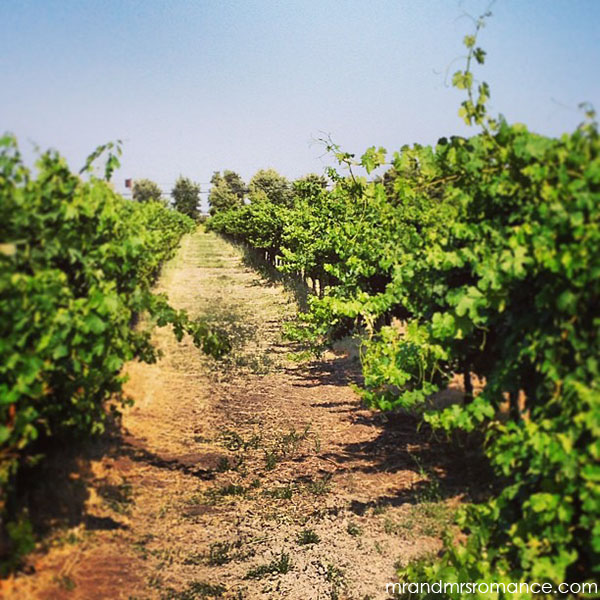 We travelled north to California wine country. Sonoma is a lovely part of the world and always 10 degrees C warmer than the city. Out of the fog, you’ll soon find grape vines, wineries and rolling fields. Lovely stuff! 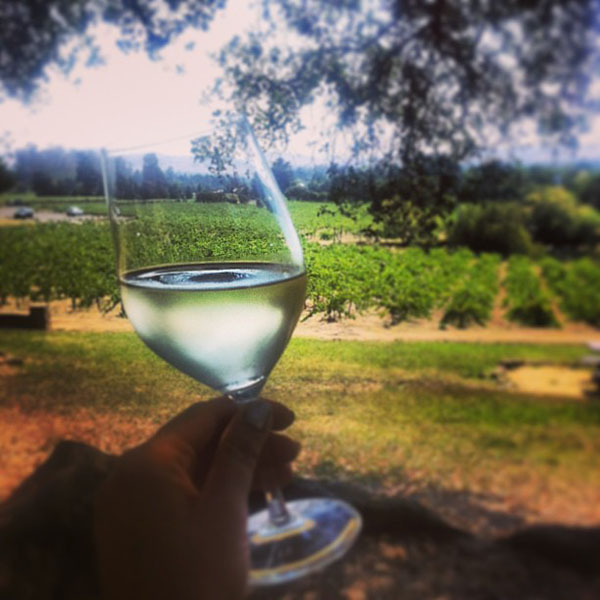 A glass of the local Sauvignon Blanc. Cheers! 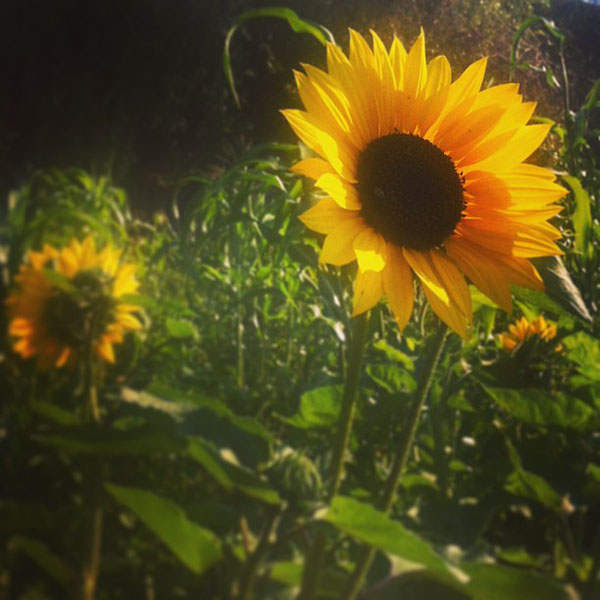 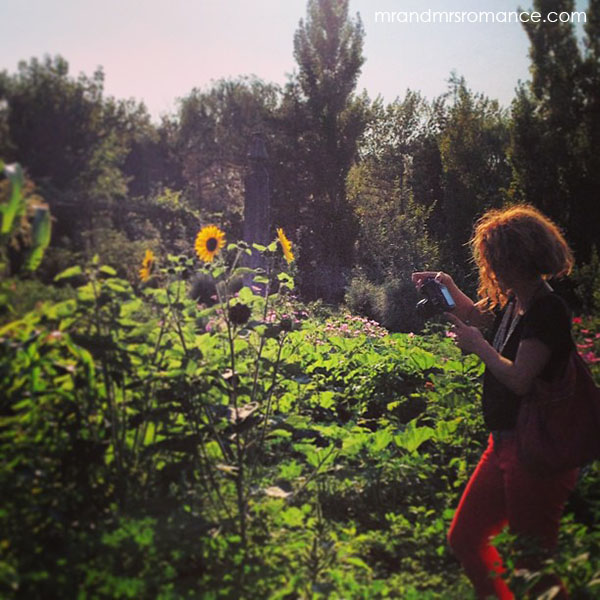 Next stop: San Diego – round two!

Why you need to go to Vinales, Cuba. Now!

Revisiting Viñales in Cuba’s west is something we’ve been looking forward to pretty much since we left the first time. Now we’re back and…