It might sound obvious, but wineries release new vintages every year. This means there’s a new bottle on the market all the time. But these three wines and styles each have something a little different worth looking out for. 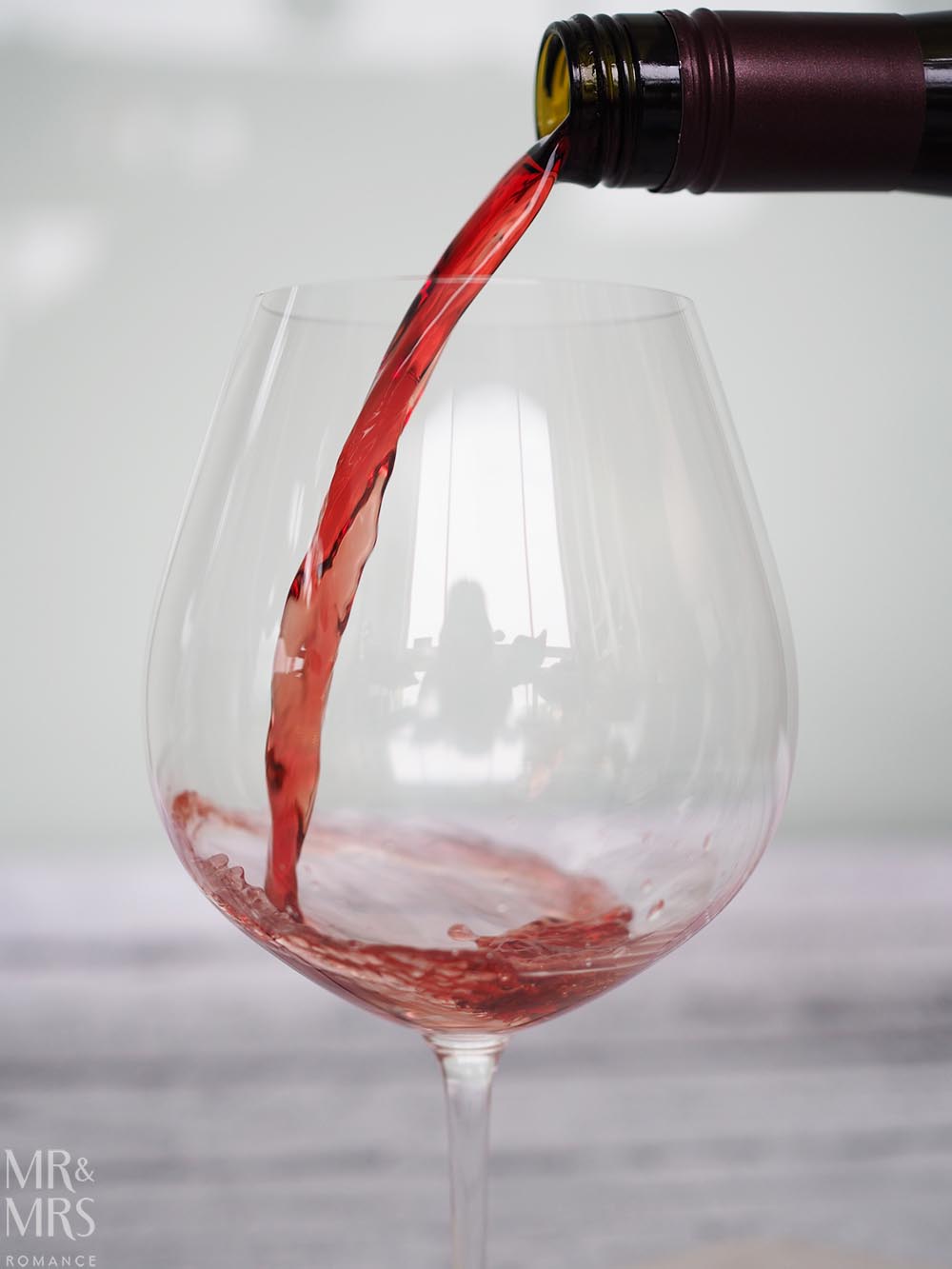 It’s no exaggeration to say the wine market – especially here in Australia – is crowded. Trying to grab consumers’ attention is the hardest part of the industry, and tearing people away from their favourite go-to drop is almost impossible.

For us, there are a few favourites that we always reach for. Bottles or brands that mean something special to us – the wine we drank on our honeymoon, a varietal we discovered while we were travelling – or that we’ve been enjoying for years.

But we also love trying wine that’s new to us – especially when there’s an interesting story behind it or a significant difference in the way its made.

Here are three examples of exactly that:

3 wine releases with a difference

A new varietal for changing times.

St Hallett has released (as of 12th November 2020) their first ever Syrah – Higher Earth – $60.00 RRP. Softer in style and lighter in body compared to their signature Shiraz, this wine is a new direction for the winery.

I think it also shows a change in the palate of Australian wine drinkers too.

This Syrah, which is grown high in the Eden Valley hence the name, is a beautiful rendition of the variety.

Dark cherry and peppery on the nose while red berries and a slight earthiness make this an intriguing wine and a great addition to St Hallett’s portfolio. 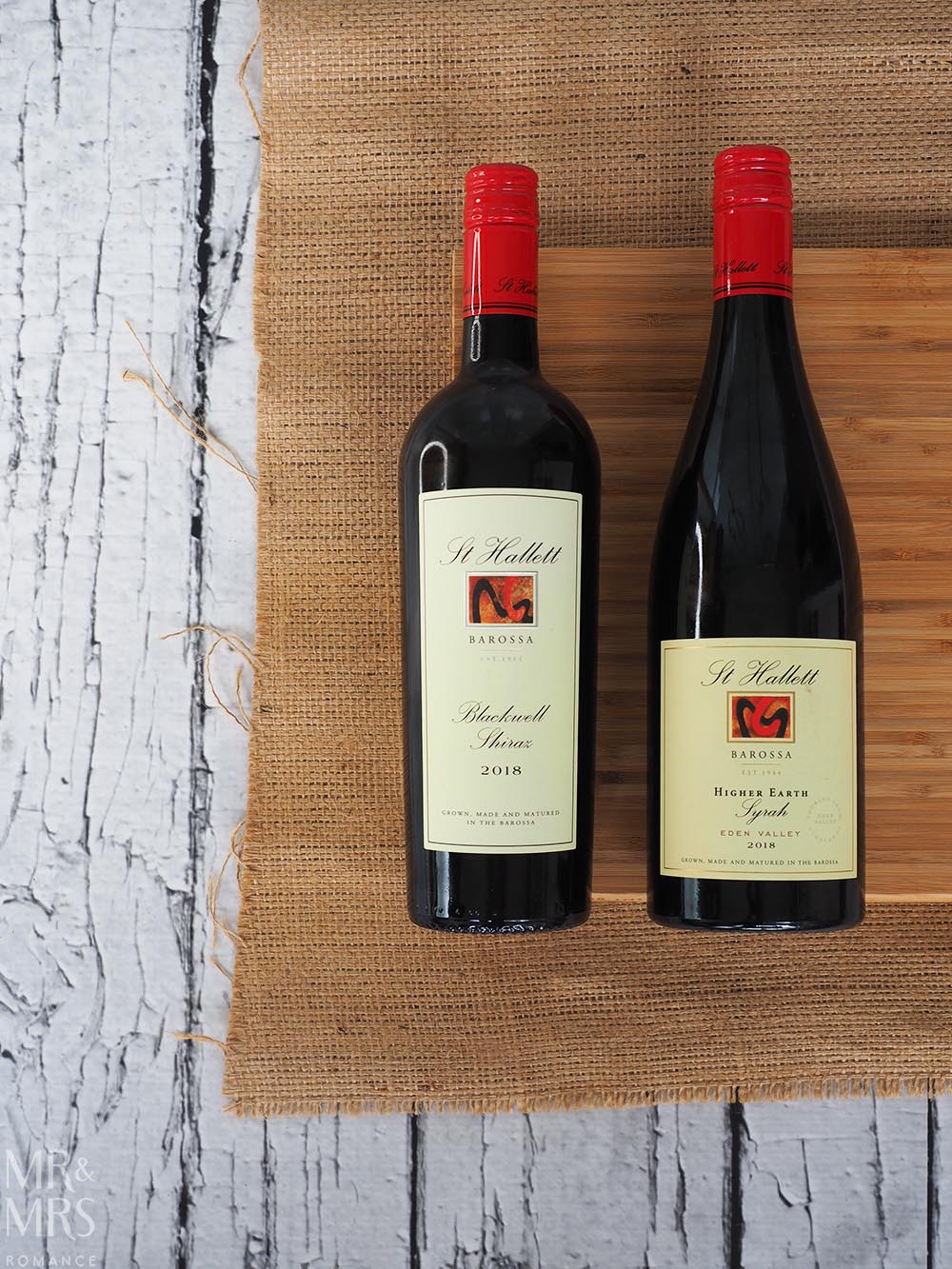 Along with this new wine for St Hallett, they’re also releasing their latest Blackwell Shiraz – the stalwart of the brand ($54.99 RRP).

It’s interesting compare the two and see the differences between the Blackwell, which is a Barossa Shiraz icon grown low on the valley floor, and the Syrah Higher Earth.

What I was saying about people buying wines because the vineyard means something to them, St Hallett is one of those for us.

A wine range that champions the growers.

All too often, the focus is on the end product, the winery and the winemakers. But without the farmers growing and tending the grape vines, we wouldn’t have the wine.

Known as The Group, this ‘co-operative’ of around 100 wine growers in South Australia finally have a platform to have their skills recognised.

Embracing the essence of this group of growers, each wine has been named with collective nouns for different animals; a murder of crows, a shadow of panthers, a quiver of snakes, a fever of rays and a siege of cranes. 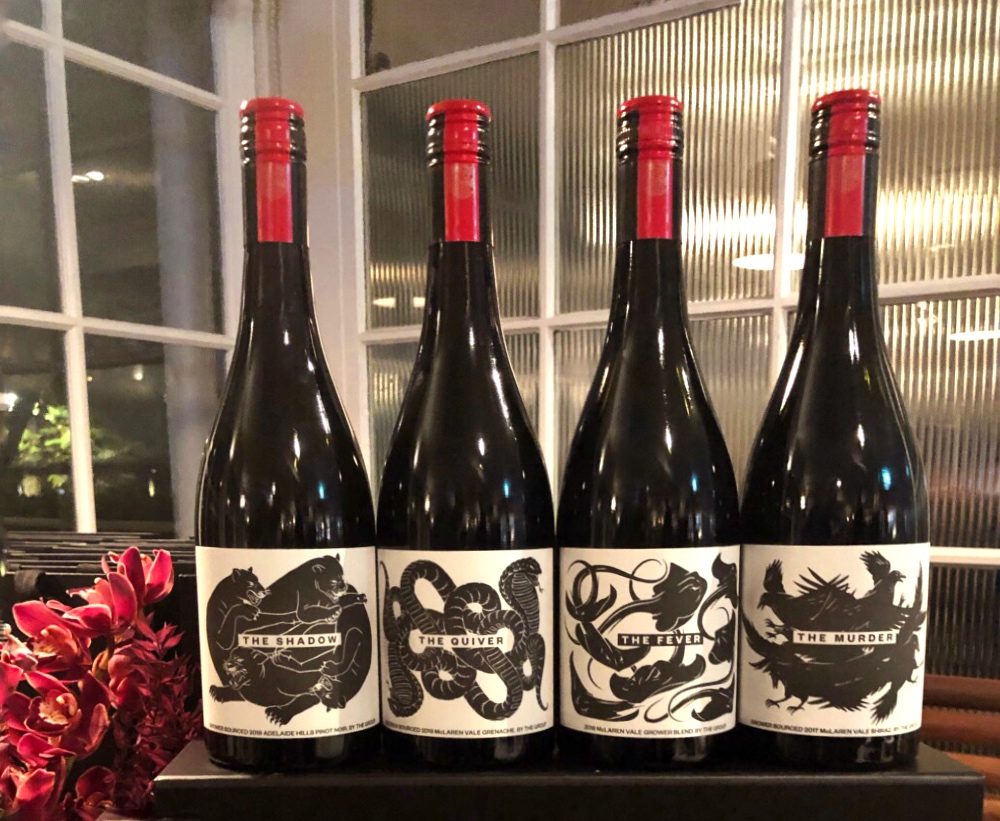 The Murder is a Shiraz from McLaren Vale made by Brian Cameron. It is a classic inky McLaren Shiraz with excellent length of flavour and energy. A beautiful wine. $34.00 RRP.

The Shadow is a Pinot Noir from Adelaide Hills, made by Mike and James Press. It’s a bold, bright example of this sometimes tricky variety, but this father-and-son team has nailed it. Elegant yet powerful. $34.00 RRP

The Quiver is a Grenache from McLaren Vale by Fred Howard. Usually found in GSM blends, Grenache is becoming more popular as a grape in its own right, which I love. The Quiver is a deep, rich drop with a touch of heat and spice. Delicious. $34.00 RRP

The Fever Grower Blend is from McLaren Vale made by Julie and Michael Symonds – and is my favourite in the range. This is an unusual blend of 70% Merlot, 15% Cabernet and 15% Mourvèdre. The result is a dose of savoury earthiness that hides the youth of this wonderful wine. Plenty of dark fruit and tempered power follow giving a wonderful structure to the wine. $34.00 RRP

Finally, the Siege is a limited release Shiraz from McLaren Vale by David and Ang Paxton. They grow their grapes in a low-yield biodynamic vineyard (with only 150 cases made) and the result is a wine full of cocoa, spice and dark fruit. A complex, layered rare wine. $70.00 RRP

This range of South Australian reds is a real credit to the skills of these people who work so hard – literally – at grass-roots level for little credit.

There’s a collaboration going on between the American Northwest and the Deep South.

Perhaps the most fascinating new approach to wine that we’ve seen recently is the Robert Mondavi Private Selection.

This American winery has been going for well over 50 years, growing high-quality cold-climate wines in the northern regions of California.

But by taking select lots of each wine, ageing them in barrels once used for American spirits then blending them back in, the depth of flavour expands and new complimentary notes combine. 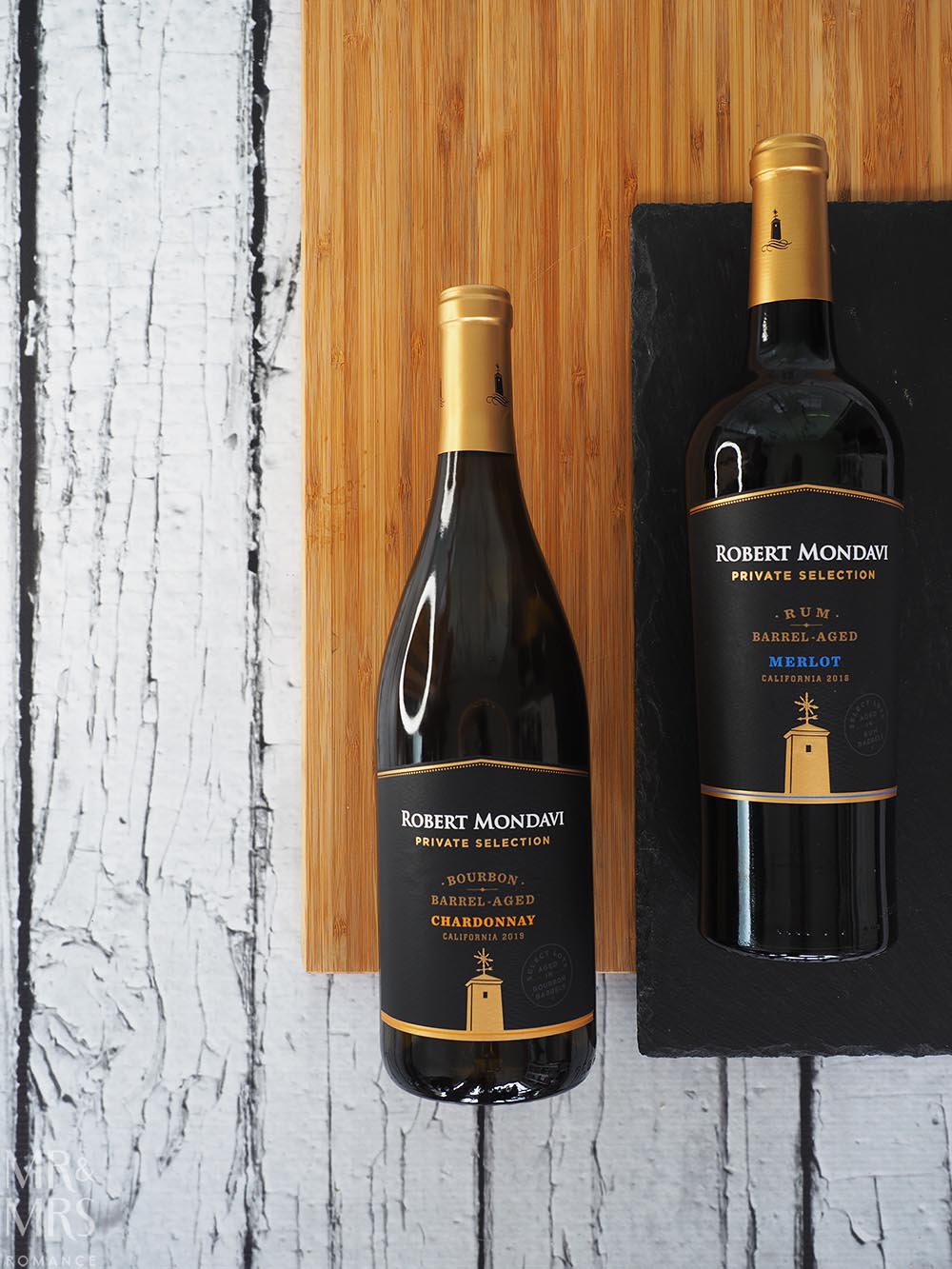 The Private Selection Chardonnay and Cabernet both have a macchiato of Kentucky Bourbon, while the Merlot is in dark rum barrels.

We’re really impressed with the result of these wines. The novel use of spirit barrels creates a nuance that you wouldn’t otherwise be able to get.

Extra oak and caramel in the Chardonnay, a little more sweetness and smoothness in the Merlot and further hints of vanilla and coffee in the Cabernet. There’s also a richness in all of them that’s rather profound.

Find these three wines in Aussie bottleshops nationally for around $25.00. 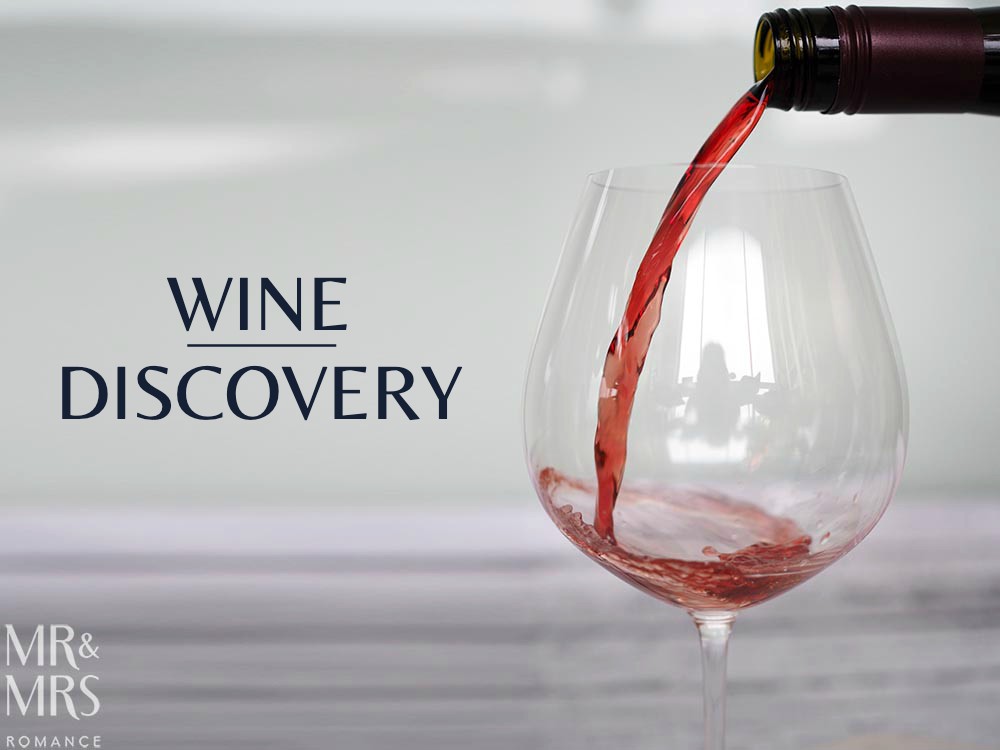 Things to do in Chicago: Chicago architectural river cruise

Chicago’s an incredible city. The shores of vast Lake Michigan on its northern edge make it feel like you’re in a coastal town. Its…