While Amsterdam’s been taking all the tourist glory, its little sister Rotterdam – only 35 minutes south – has been beavering quietly away to create a city that’s not only incredibly liveable but iconic, modern and beautiful. Here’s where to see the best of Rotterdam and its most photogenic spots.

Cities in Europe often have a similar feel to them: old, grand, historic and sometimes tricky to adapt to modern life. But beautiful nonetheless.

After coming straight from old European cities like Lecce and Bari in Italy, Brussels and Stockholm in Belgium and Sweden, London and St Albans in England, we were expecting more of the same as we stepped off the train in Rotterdam.

But we were wrong to expect that.

Check out our video guide to photography in Rotterdam here.

This was no medieval city. It wasn’t renaissance (in the classical sense anyway) or baroque either, and it certainly wasn’t art nouveau or deco.

The city that greeted us was so modern, it felt like we’d stepped not from a train but from the pages of a Robert Heinlein or Isaac Asimov sci-fi novel. 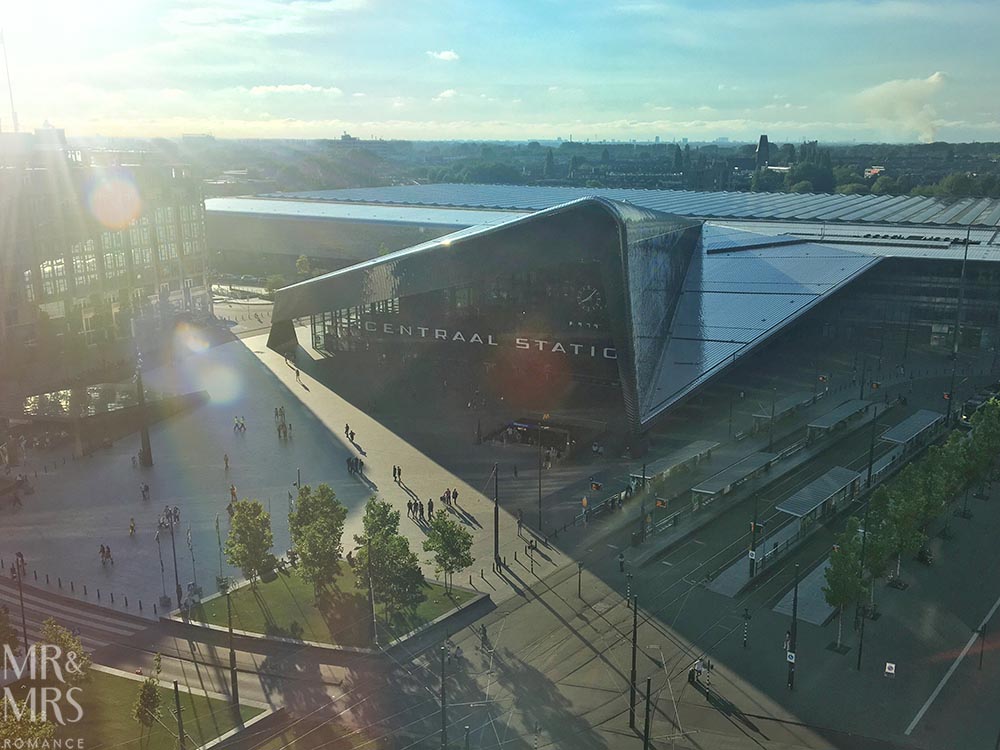 Wide, neatly paved streets were clean and civic. Gleaming towers of a modern central business district contemplated us from their heights and there was an almost uneasy sense of balance in the air.

We were used to the noise and buffeting of narrow cobble streets, dodging cars and mopeds that shared our walking space. We’d acclimatised to that feeling of pressure you get from a 21st Century squeezed inside the walls of cities that have been there for a thousand years.

Instead we could hear the ting of bicycle bells and the quiet belly rumble of trams coming up through our feet. And we could walk with our friends Sara-May and Pat 4-abreast with no problem.

You see, in WWII, Nazi Germany decided to bomb Rotterdam flat. And on May 14th 1940 that’s what the Luftwaffe did. There are a few vestiges of the old medieval city, but not much.

And instead of trying to recreate what was there, Rotterdam decided to blank slate the city – though to talk of slates is so last century for this town!

The result is a uniquely photogenic space with considered angles, remarkable architecture and an adventurous personality that’s rare when it comes to planning cities. 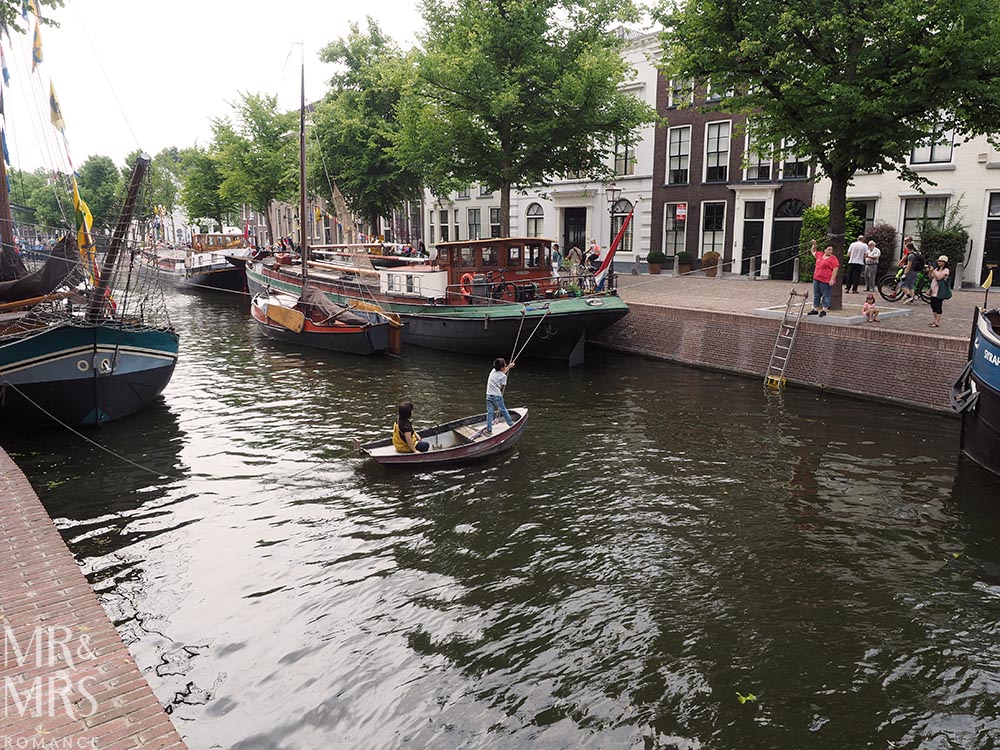 Our photographer’s guide to Rotterdam

There are many buildings in Rotterdam that have won or are worthy of awards. Two favourites are Markhal – an enormous market in the city centre and the main train station itself Centraal Station.

The food stalls inside Markthal are a photographer’s dream anyway, but pair them with the incredible walls and ceiling of this modern masterpiece and you’ve got something special. The windows you can see high above set into the walls are in fact to people’s apartments.

Every weekend, the expansive square outside Markthal becomes one of the biggest outdoor markets in Europe. 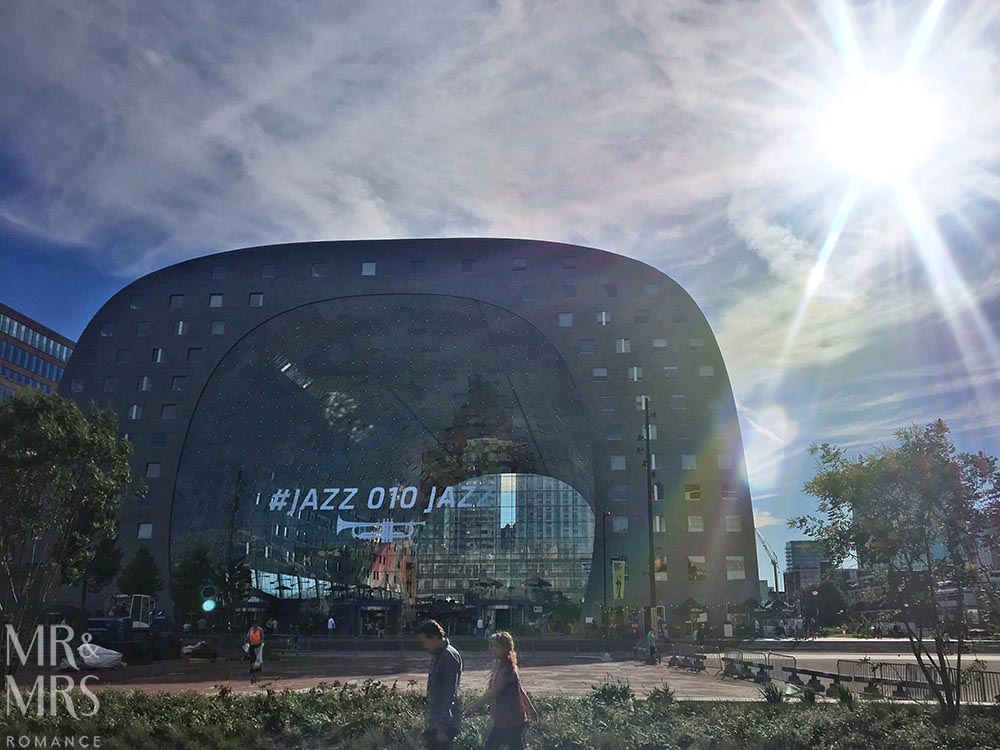 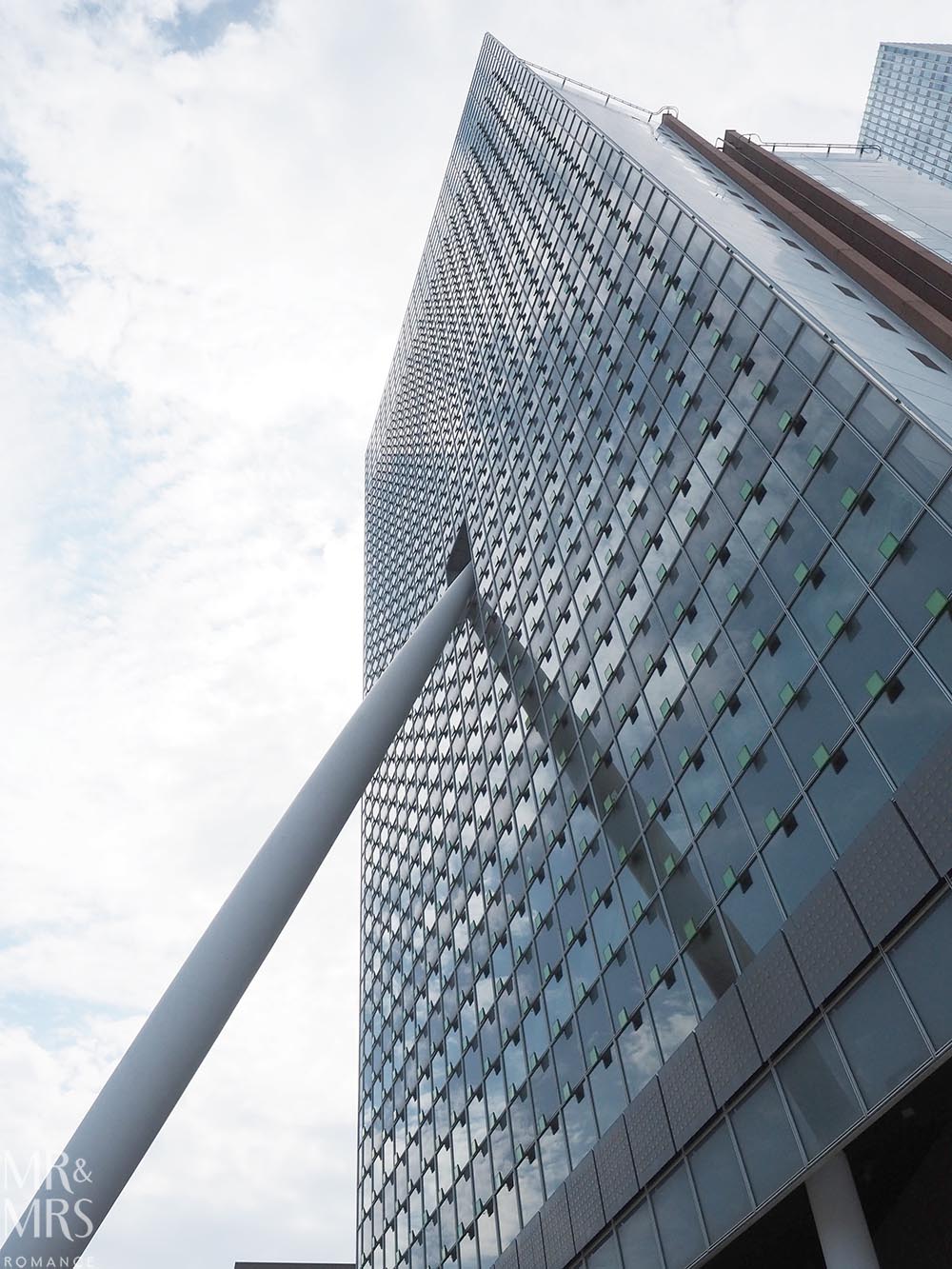 There are actually hundreds of spots for good street photography around Rotterdam, but Cool District is home to a concentration of street-front bars and restaurants like nowhere else in the city.

The funny thing is the further north you go in Europe, the less happy people are with having their photo taken. In Puglia in southeastern Italy, they’ll almost beg you to take their photo.

In the Netherlands, not so much. And coming from England, I know exactly how they feel.

So either be sneaky or be prepared for the possibility of a rebuff. 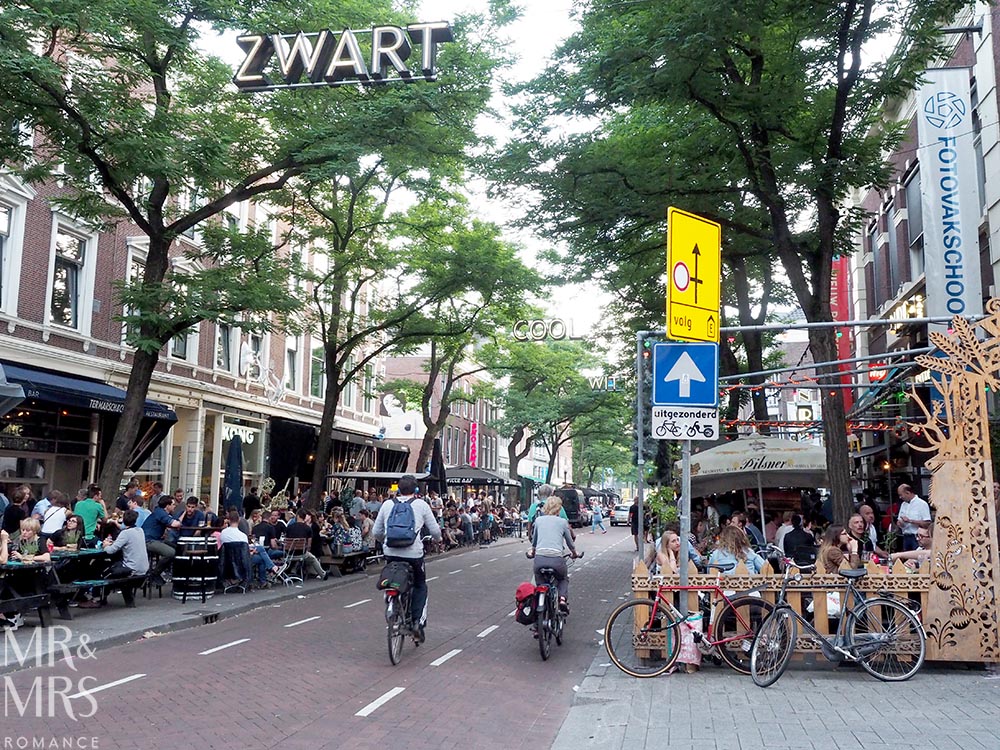 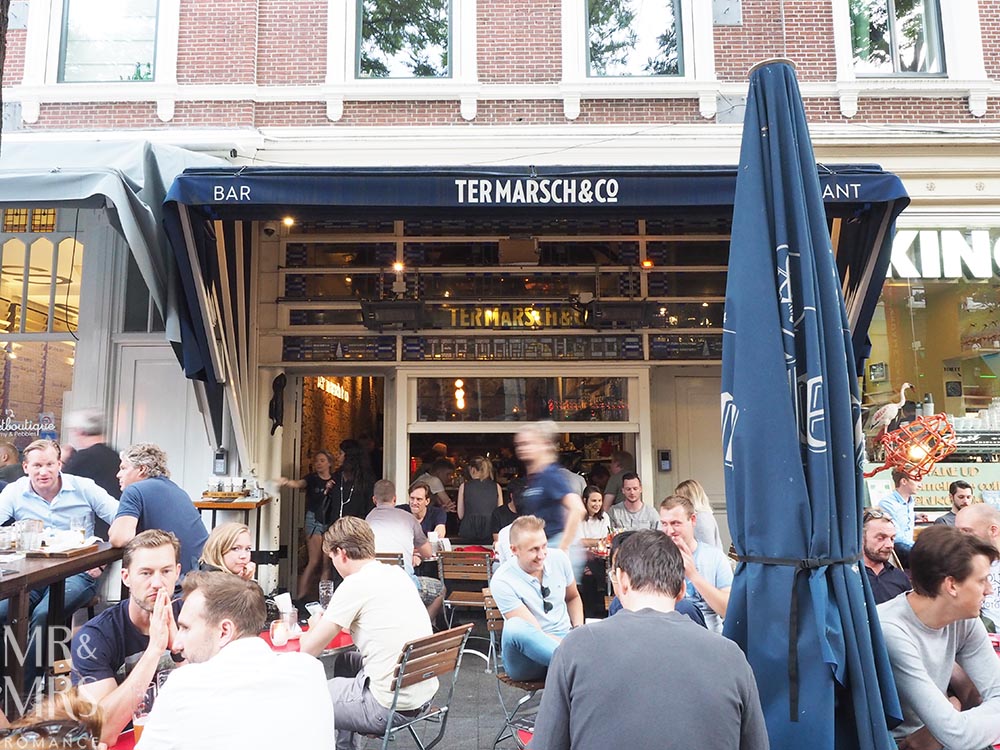 There are a few buildings scattered around central Rotterdam that the 1940 bombardment missed. Make sure you don’t miss snapping a photo of the Witte Huls – reportedly Europe’s first ‘skyscraper’.

It’s a beautiful old building down by the Maritime Museum, which is a perfect spot for a snack and a drink on the waterfront. 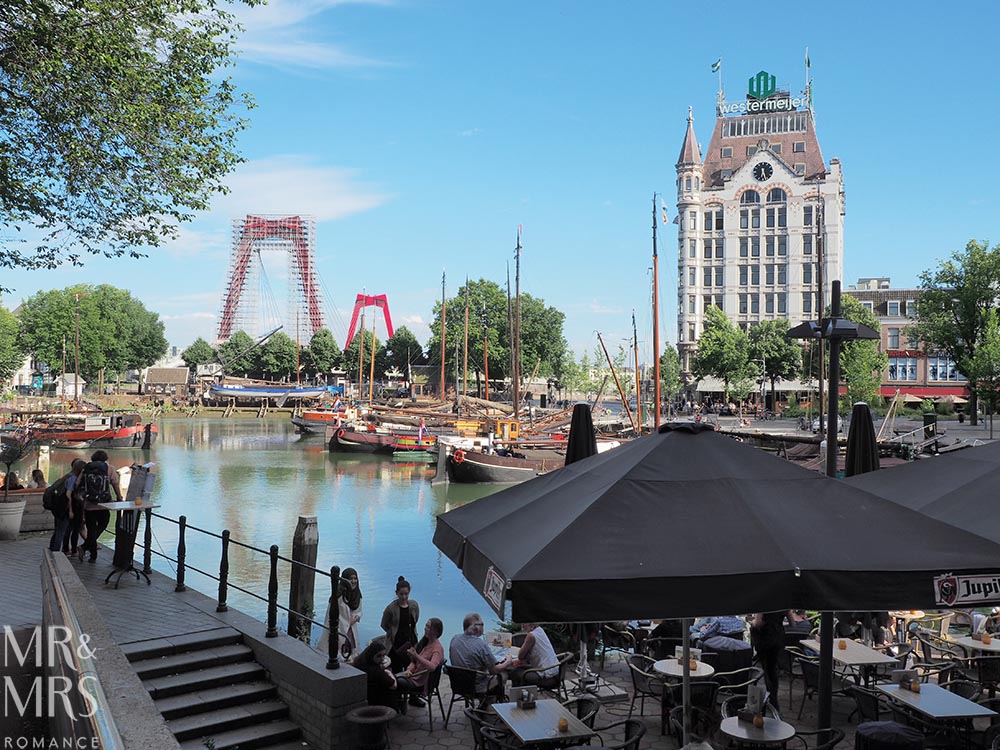 The Ring of Fire – Cube Houses, the Delft Gate memorial and Grote of Sint-Laurenskerk

The Ring of Fire is the limits of where the damage from the bombing stopped and is marked on the ground by a line of red lights. Within this circle you can find some extraordinary buildings like the Cube Houses, which are residential.

Another highlight is the Delft Gate memorial – a metal frame outline of what one of the main gates to the city looked like and where it once stood.

Grote of Sint-Laurneskrek is one of the other few remaining gothic buildings of Rotterdam. 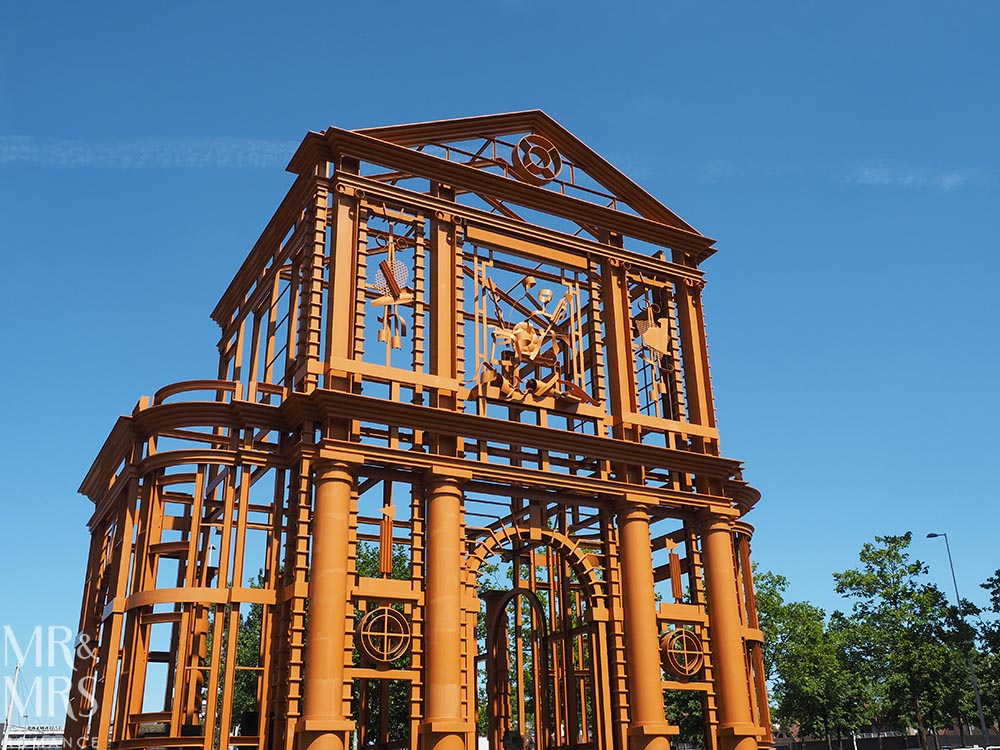 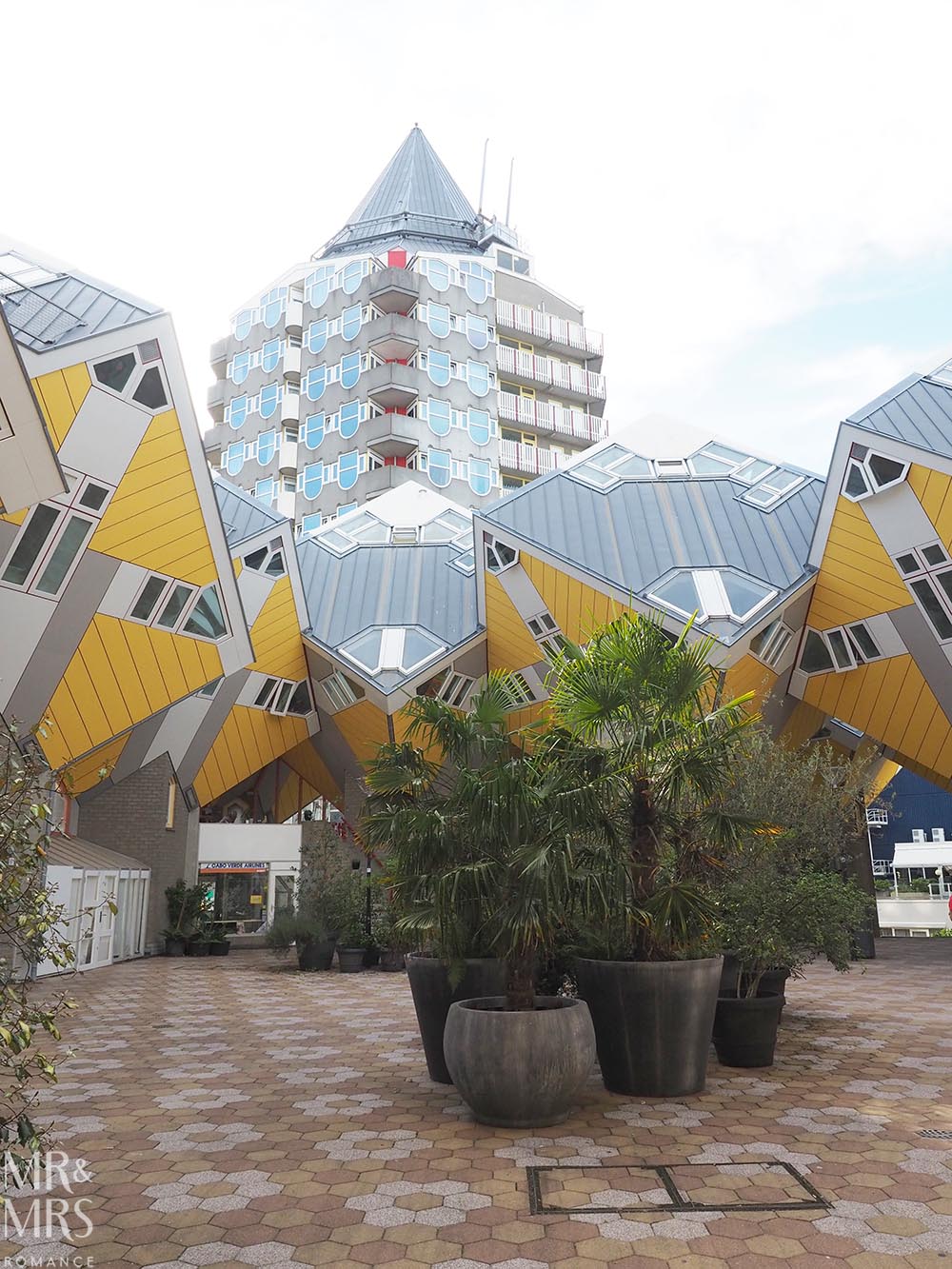 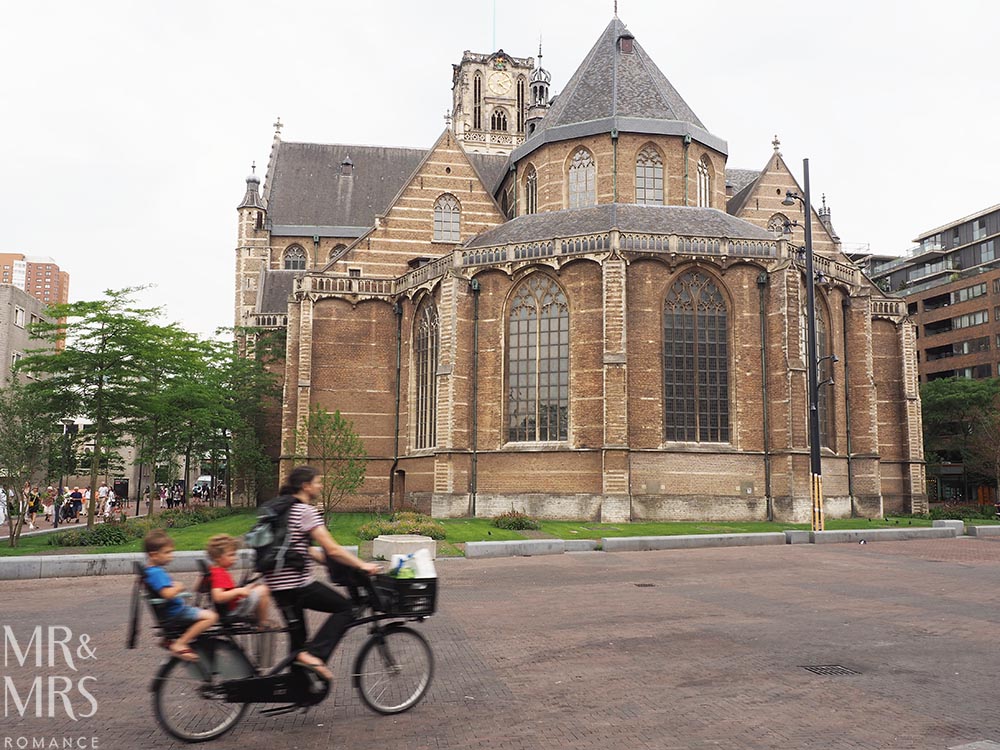 Nature in the city

Rotterdam is full of parks and green space, and the network of canals, the river and surprising number of lakes also adds an extra level of nature to the city.

In the northeast of Rotterdam – a short bike ride away from the city centre – is Kranlingse Bos Park and the area’s largest lake. If you’re looking for photos that show Rotterdam at its green finest, this is the place to go.

The lake’s large enough to have a small sandy beach, popular in the summer months for swimmers and picnickers, and there’s a choice of cafés around the shore too. 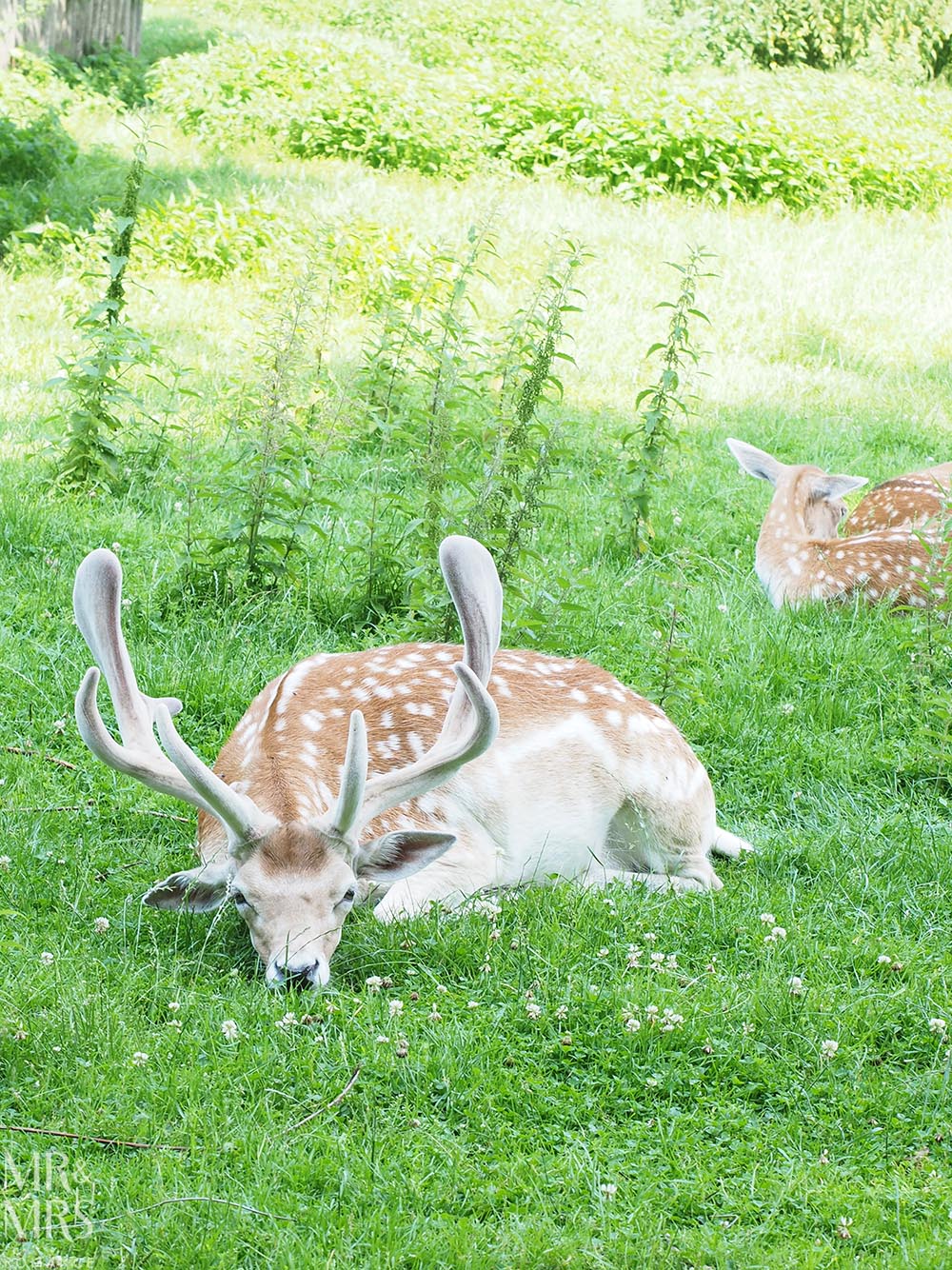 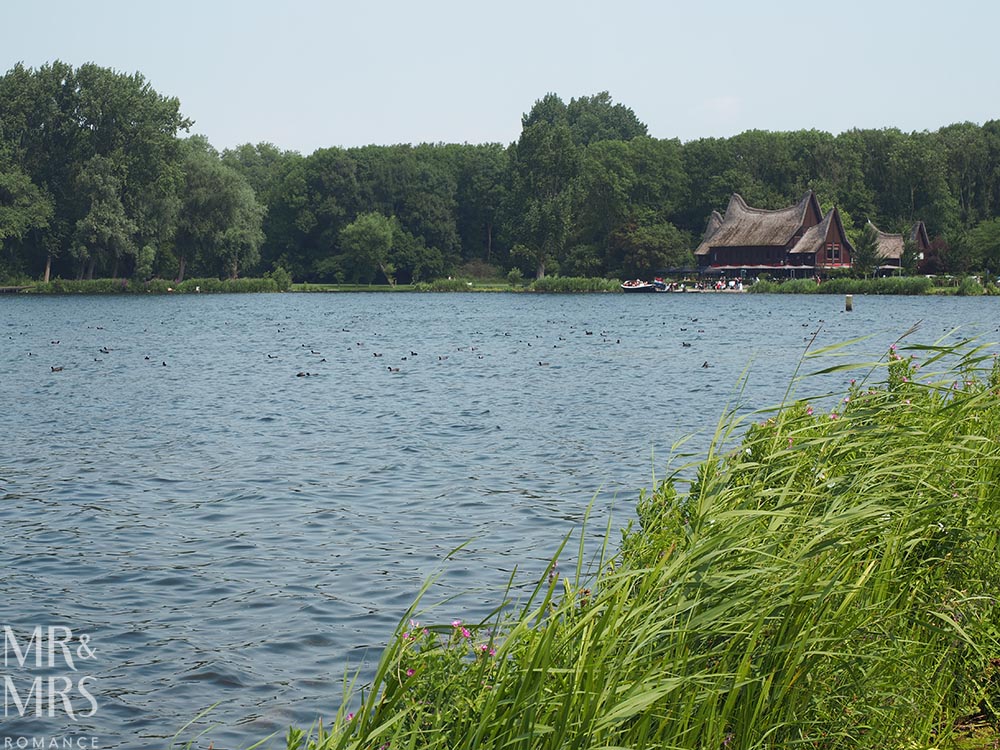 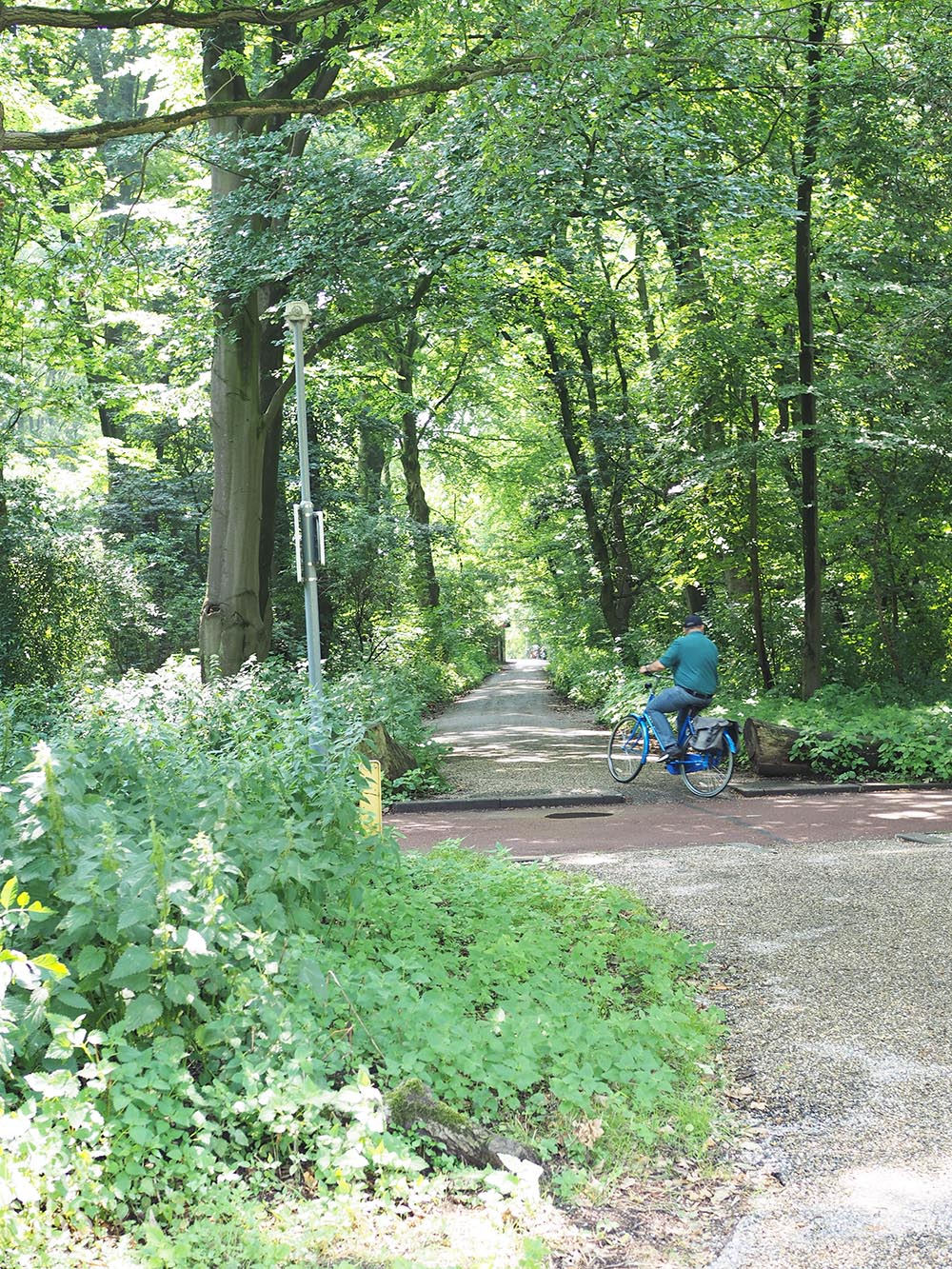 South over the iconic Erasmus Bridge and east along the Nieuwe River, the waterway opens up as it heads towards the port areas of Rotterdam and the North Sea.

Converted from its industrial past, this area has been beautifully reformed with civic areas, museums hotels and eateries. It’s also the overseas passenger terminal for cruise ships coming into Rotterdam.

Apart from the impressive views out across the widening river, a stop in at the Fenix Food Factory provides more food photography opportunities than anywhere else in Rotterdam.

The most iconic building in the area is the old Holland Amerika Lijn HQ. Now the New York Hotel, it’s one of the coolest hotels to stay in with its river views and fun nautical theme. 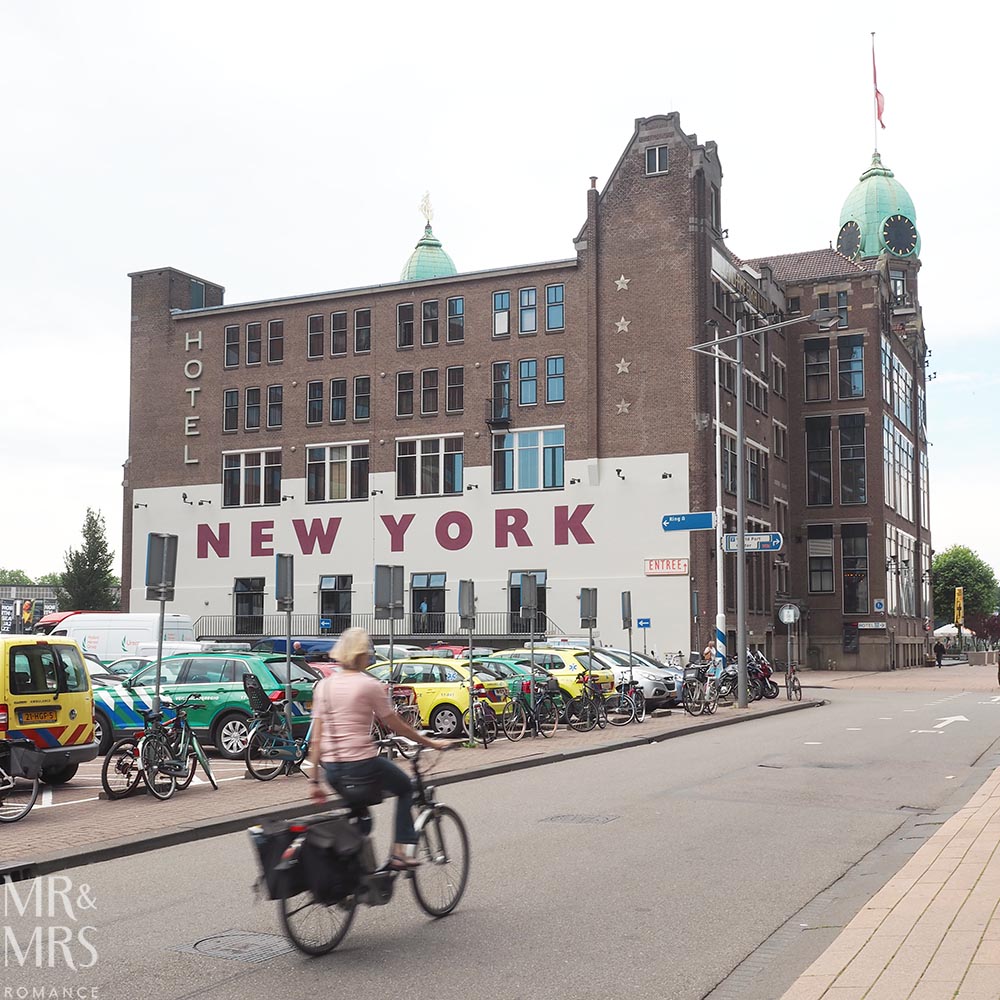 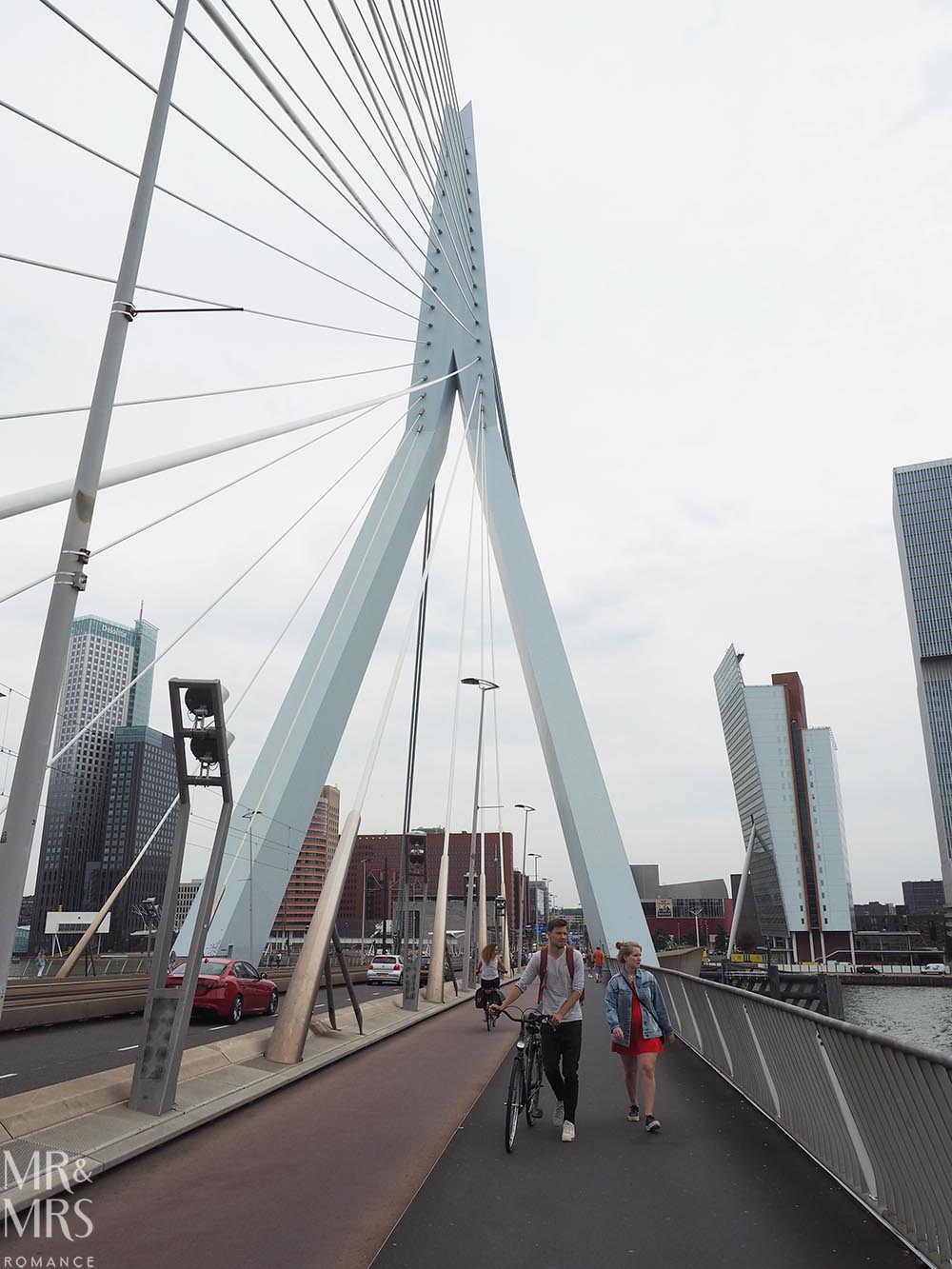 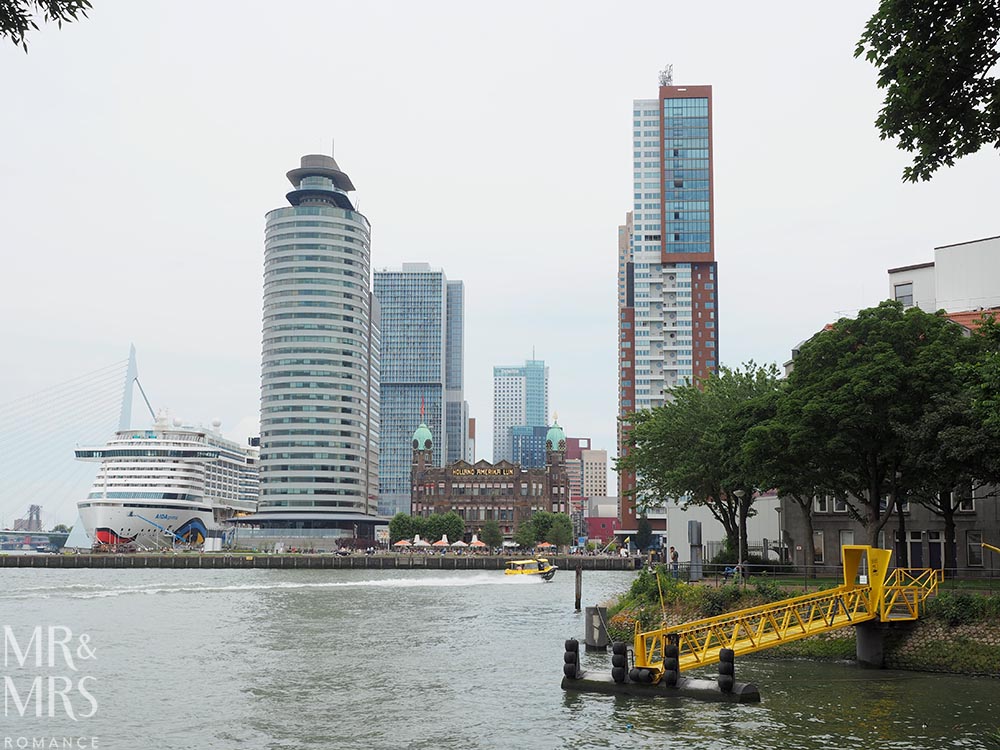 Rotterdam as it would have looked

West of the city is the charming town of Schiedam. Untouched by the bombs of the Second World War, Schiedam has maintained its old-world feel.

Centred around its little canals, windmills and Dutch Canal Style houses, Schiedam offers an insight into what Rotterdam probably looked and felt like before the 1940s.

It’s no less important than Rotterdam itself – in fact some may say this quaint town is more important than many others in the world; it’s where gin was born!

You can find out more about Schiedam and its strong connection with gin in our post here. 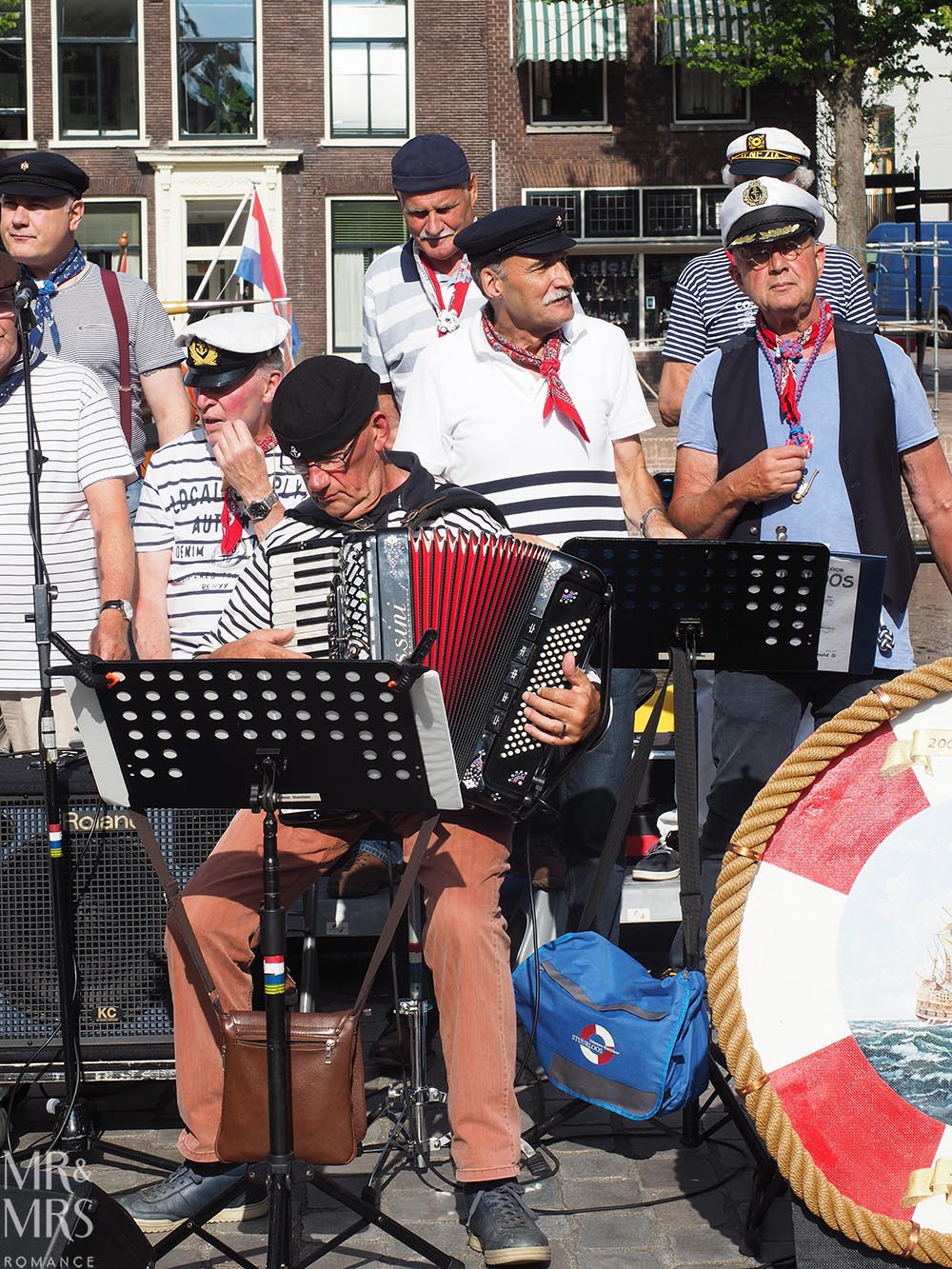 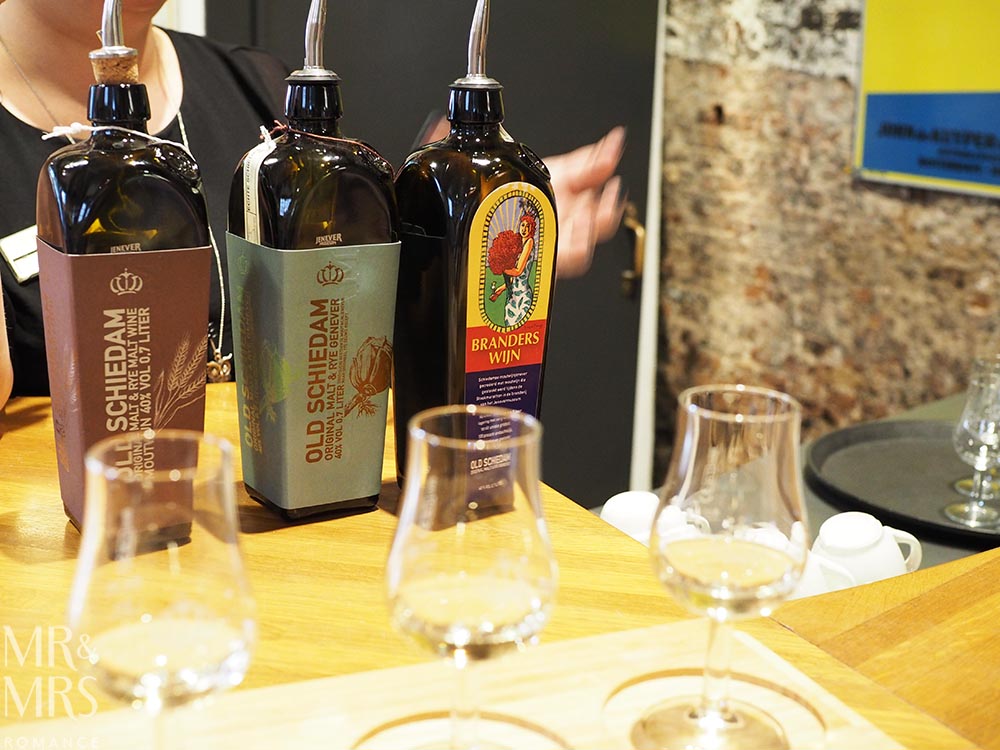 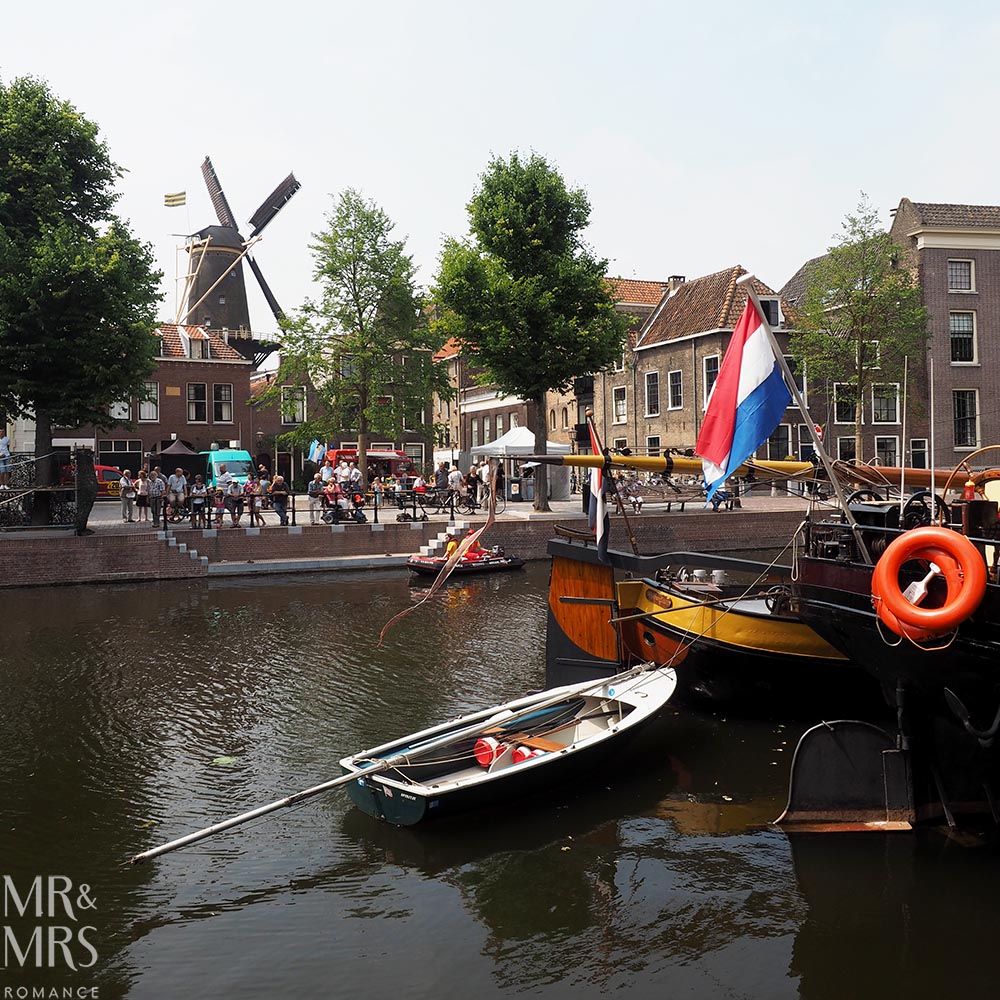 The Dutch sense of humour

As you walk around Rotterdam city, you come across many examples of the Dutch sense of humour in the form of commissioned street art.

Whether it’s the appropriately cartoon style of the Toonder Monument, or the slightly less appropriate Santa Claus or ‘Kabouter Buttplug’ (Buttplug Gnome) as it’s better known, it’s hard not to smile when you walk past.

Other iconic artwork around town is the funny bronze dog ‘Fikkie’, which as you can see comes in two parts. The second ‘part’ was donated by Roteb, the company that keeps Rotterdam’s streets clean. 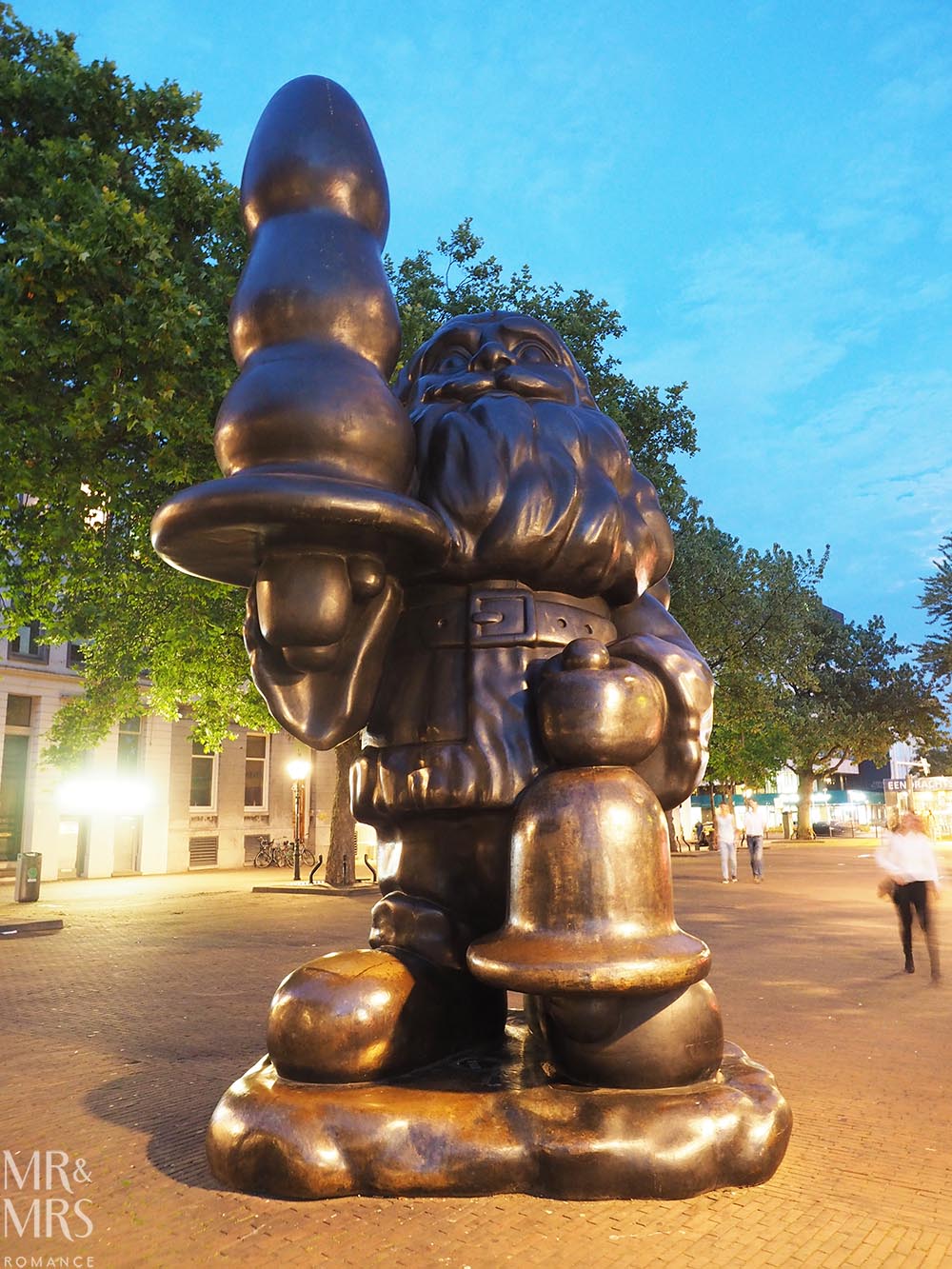 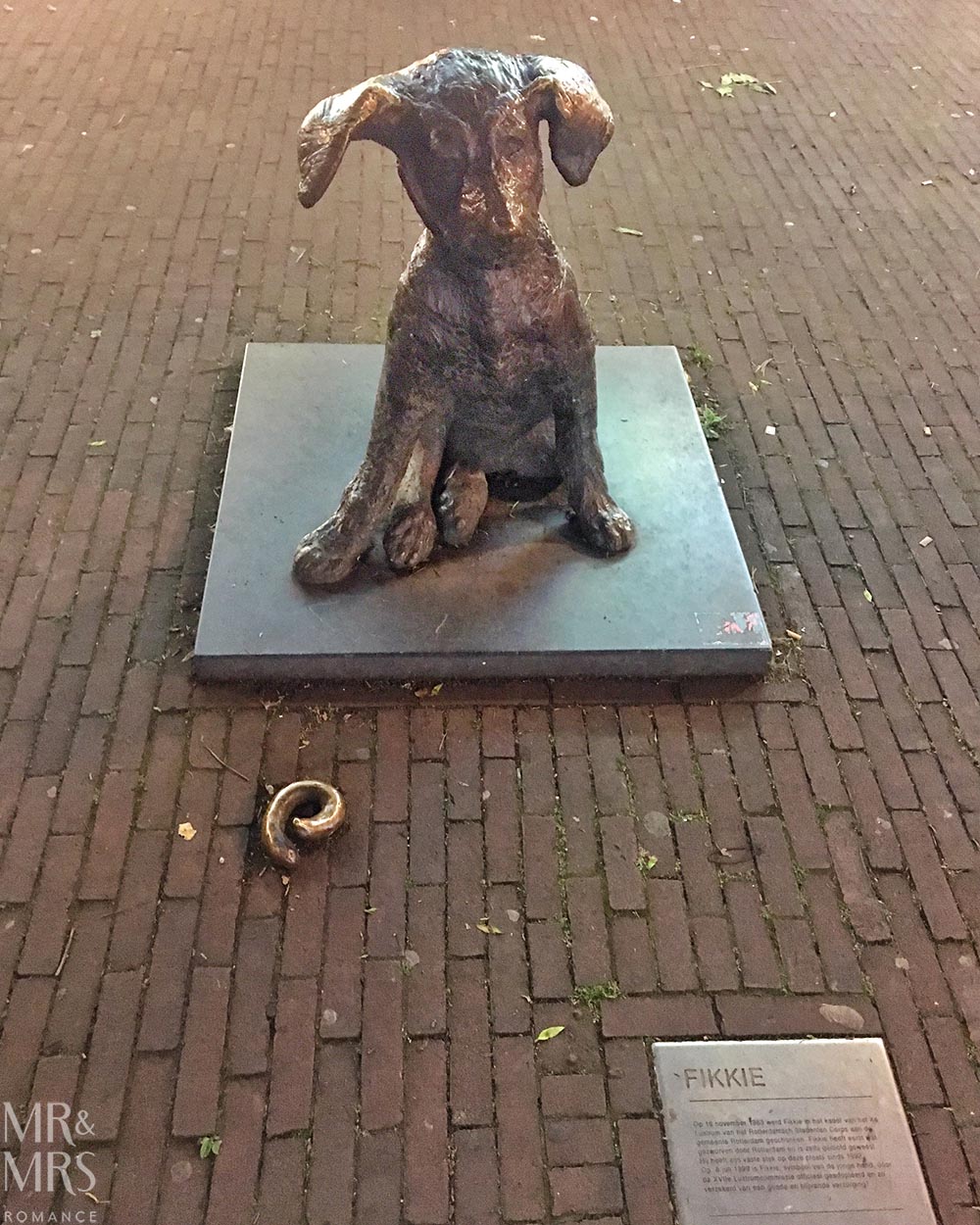 Toonder Monument is on Kolk near the Rotterdam Blaak rail and metro station, Kabouter Buttplug is on the Eendrachtsplein and Fikkie is on the Oude Binnenweg, all in the city centre.

Street artists are also famous in Rotterdam and you can see their works everywhere. You can also book walking tours with Rewriters to see the best works by artists like Lastplak, Eelco van den Berg, TelmoMiel and Ready2Rumbl. 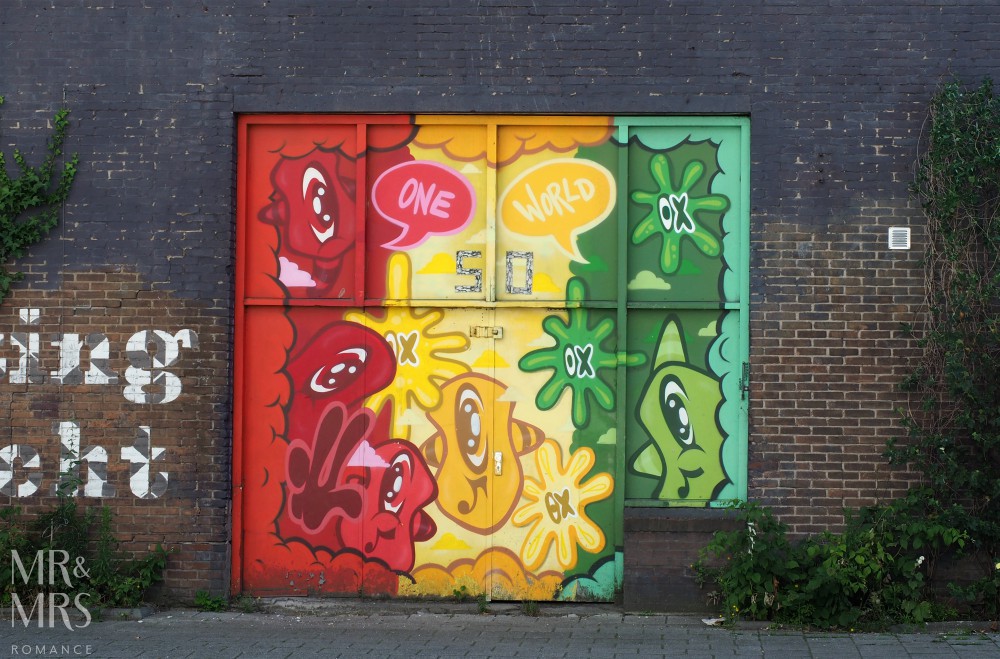 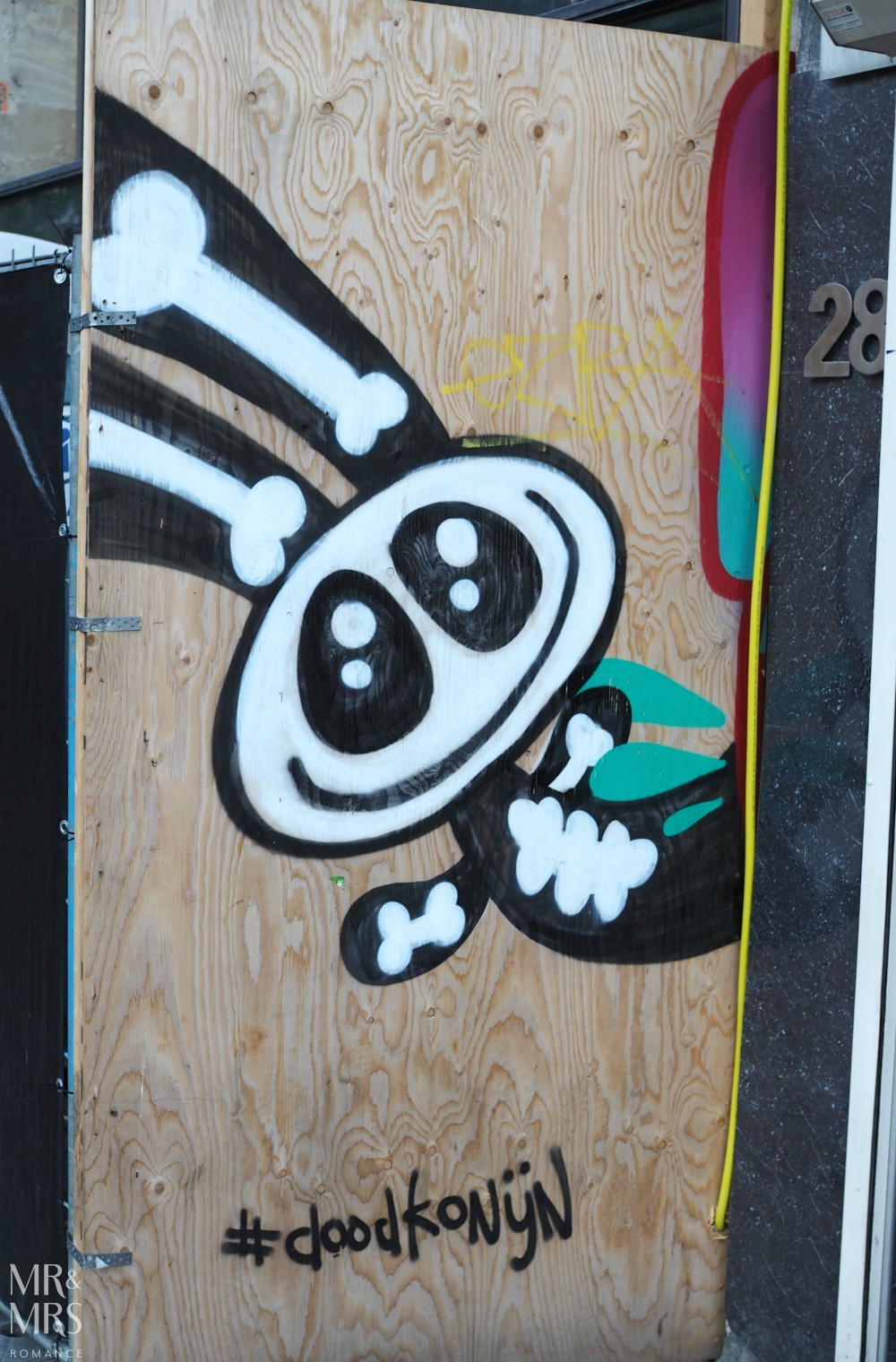 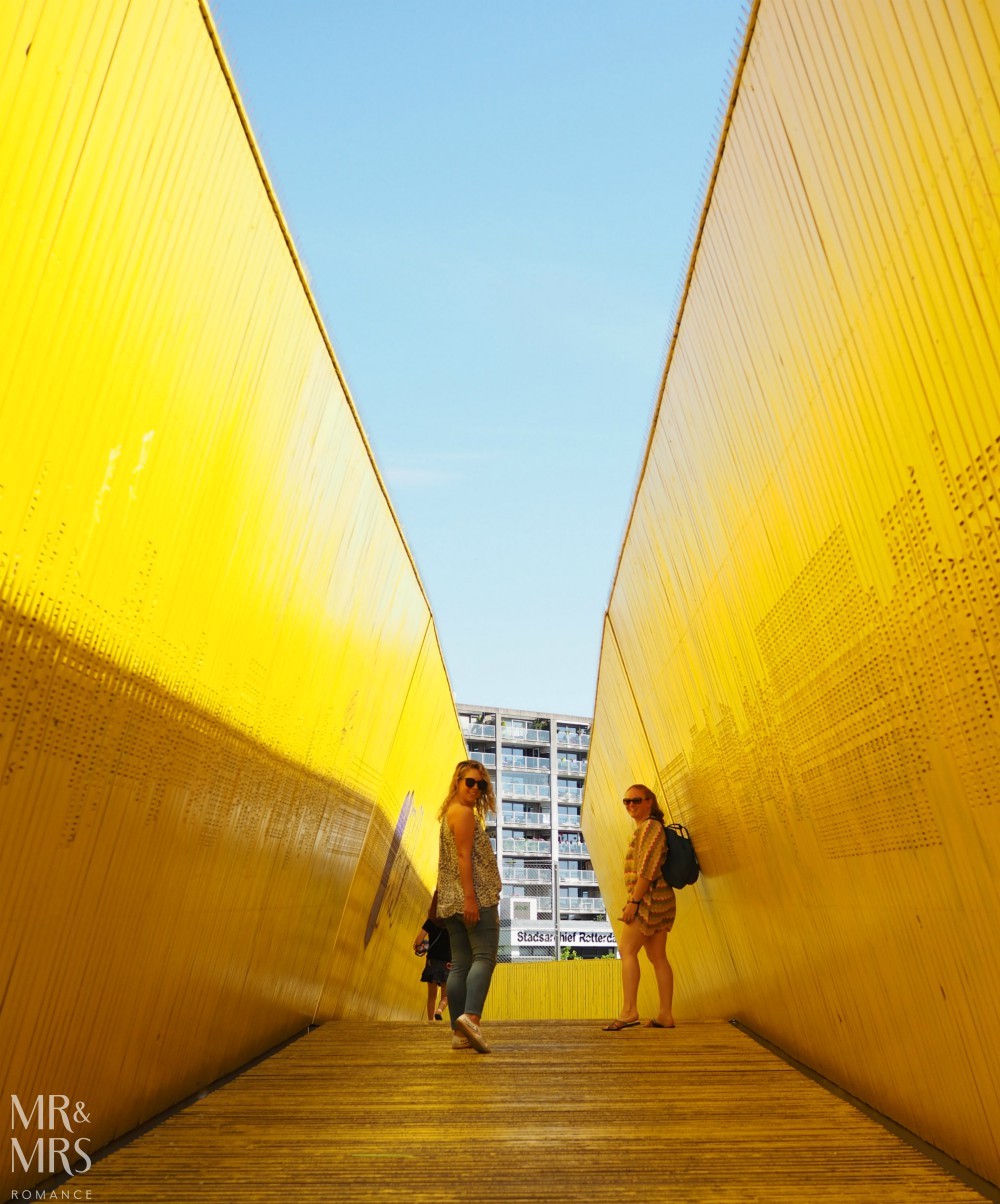 Wherever you are in Rotterdam, there’s rarely a time when you don’t feel like taking a photo. It’s so different to other European cities and the sense of fun and life are always somewhere on the horizon.

And if you enjoyed this post, you’ll love our other stories in this location guide to photography. Check them out here:

11 reasons to put Rotterdam to your Euro itinerary

Have you been to Rotterdam? Which city do you love taking photos of the most? Tell us about it in the comments below! 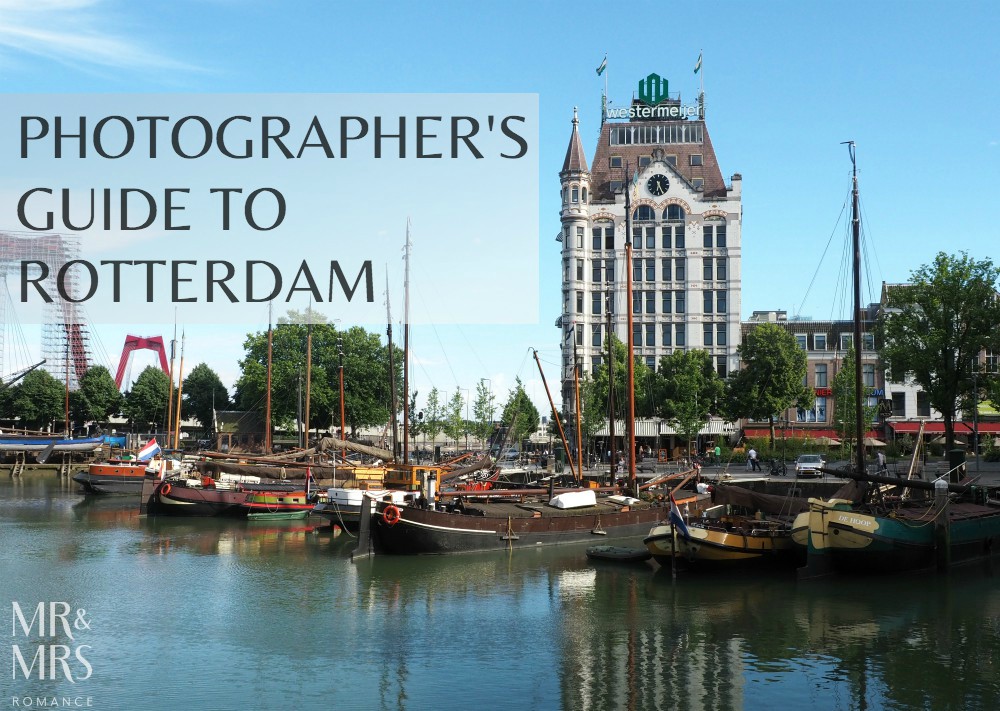