It’s true: LAX is a necessary evil for exploring the US West Coast. It’s big, ugly and brutal. On the other hand, Los Angeles itself is a fun, eclectic, buzzing city – the perfect place to charge your batteries and get over that jetlag. The question is, where do you stay in LA? 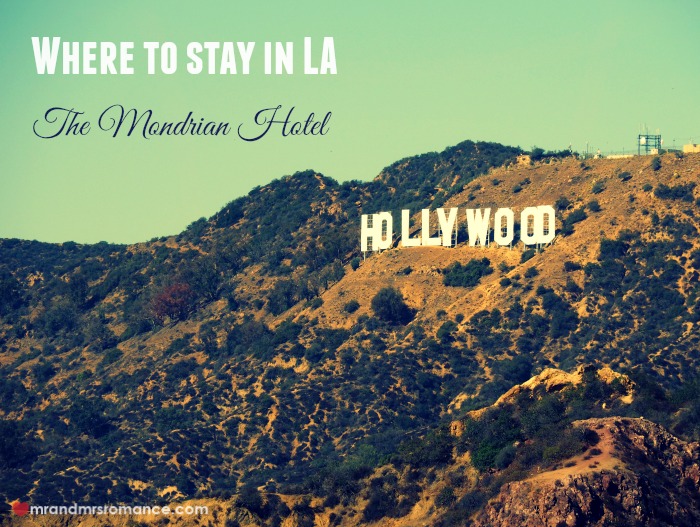 In the past, we’ve just landed in LAX, hopped in a rental and driven as far from Los Angeles as possible before my eyes fall out of my head with fatigue. This time, however, we decided to stop in LA for the night and do a little exploring.

It proved to be the best thing to do. Ever!

We stayed in the Mondrian, which is in West Hollywood. The Mondrian is a pretty fancy hotel, though its exterior is quite unassuming. In fact, we missed the entrance the first time and had to do a blockie for a second crack at parking up!

From then on though, the stress of driving in LA, the horrors of the long-haul flight – along with everything else – disappeared.

Valet took our car, concierge took our bags and reception took my credit card. Everything was perfect!

The staff at the Mondrian are super friendly and so keen to please, it’s like having eager puppies in uniform everywhere. Especially compared to the lacklustre shrugs of customer service personnel in Sydney, even a smile surprises us these days!

When we checked in, the receptionist made sure we were on the right side of the hotel – away from Sunset Boulevard side and not over the pool or Sky Bar, both of which can get a little noisy at night. 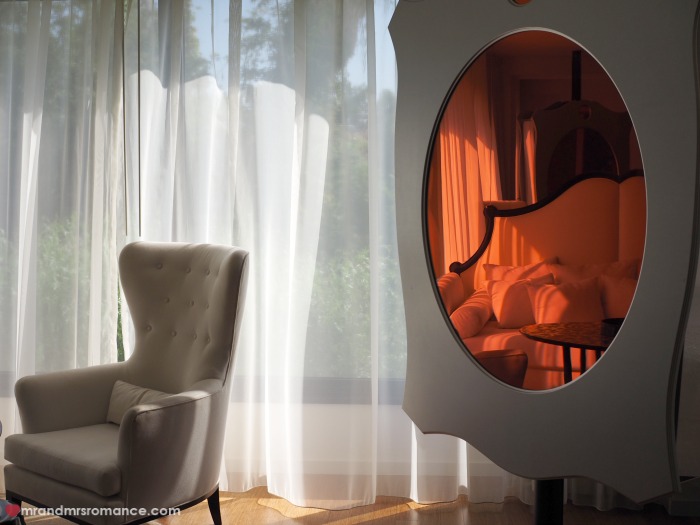 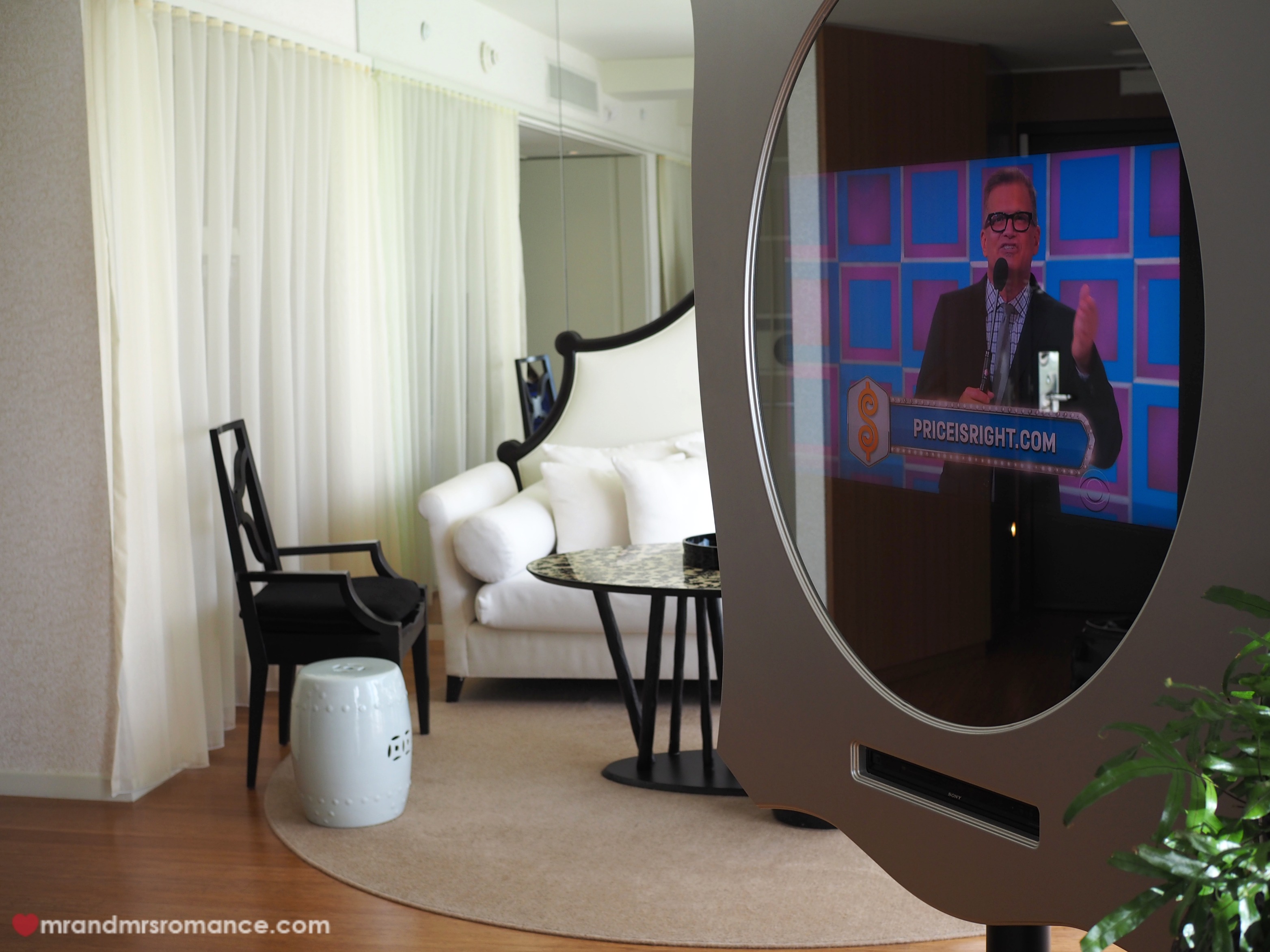 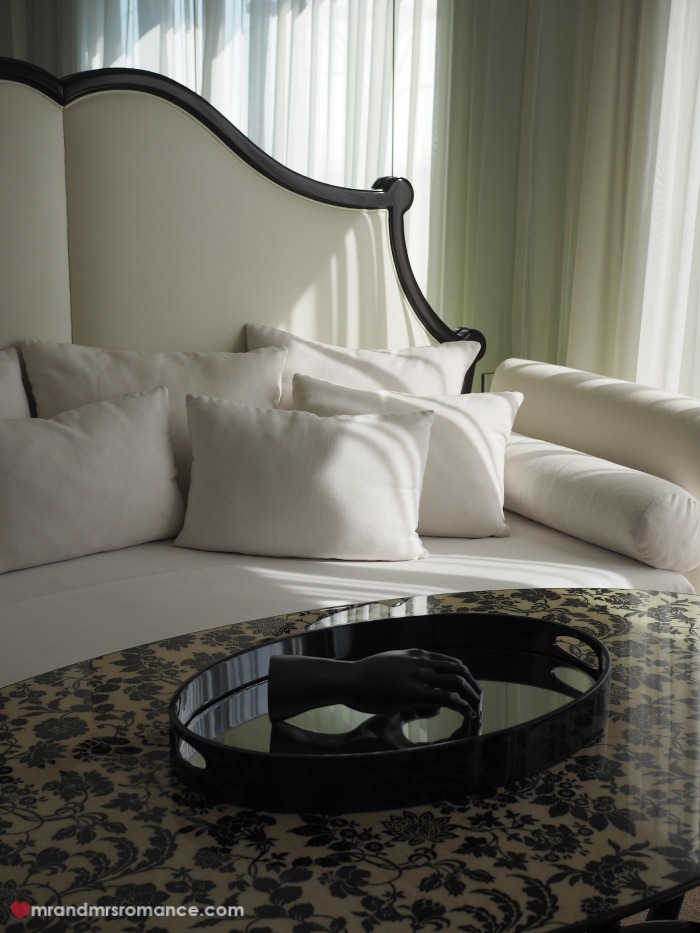 The room itself was amazingly cool. Far from being a run-of-the-mill box with a bed, it was clear from the moment we walked in that design was high in the order of importance.

Straight away, we were faced with an enormous mirror in the middle of the room. Our porter explained that the mirror revolved and on the other side, when you hit the remote, the TV showed through the mirror – yup, The Price Is Right was on!

From that point on, the room became a place to explore. The little desk tucked away behind a screen, the cushion-covered sofa, the mirrored tray on the table with a model hand on it; the bizarrely designed bathroom… everything was a little kooky; a little different. And we really liked it.

We were reminded of the QT Gold Coast we’d recently stayed in in Australia – just a million times better… no, not better, that’s not right. Perhaps better executed would be nearer the mark.

Either way, we decided to take advantage of the proffered king-size bed and collapsed for a nap.

What a good decision.

We woke up a few hours later feeling awesome.

Instead of trying to stay awake, we found embracing your exhaustion, falling into an incredibly comfy bed and going with that kind of flow was the way to go.

We headed back downstairs for a better look around. 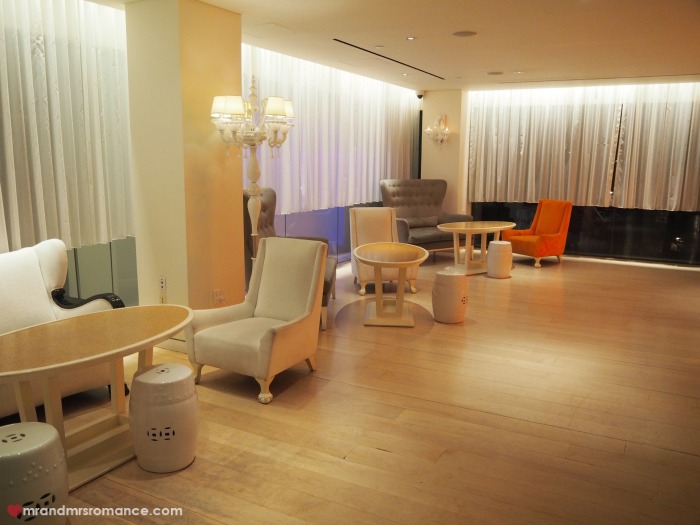 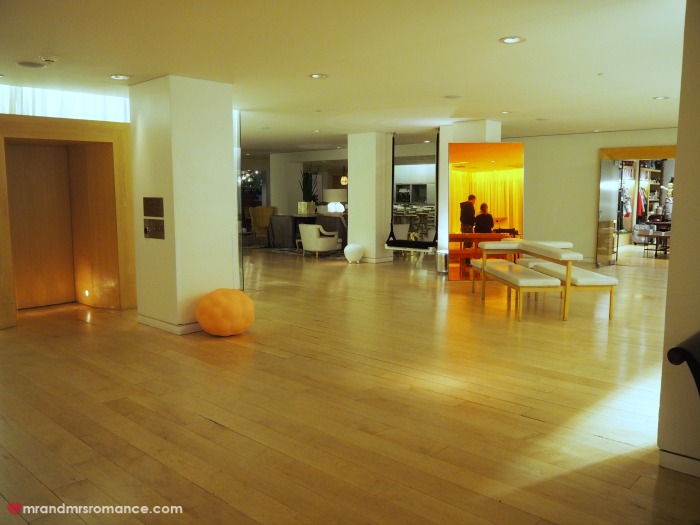 In the main foyer and little shop, we were, again, struck by the design of the place. Just the little touches – funky stools in a corner or an unusual table in the dining room – give the place that sleek edge missing from many ordinary hotels. 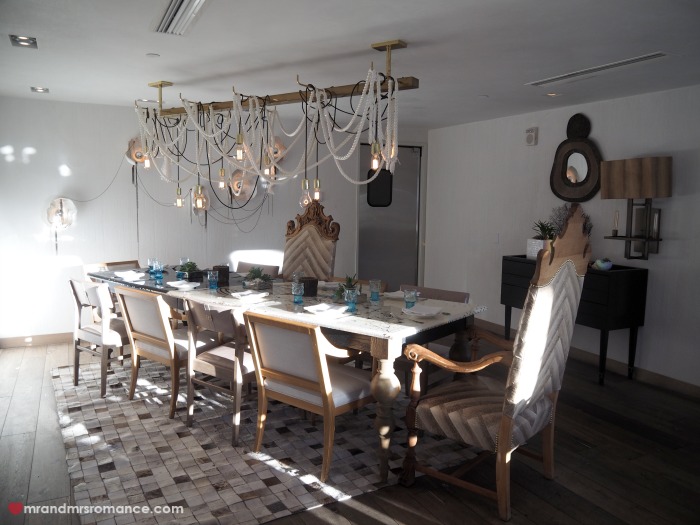 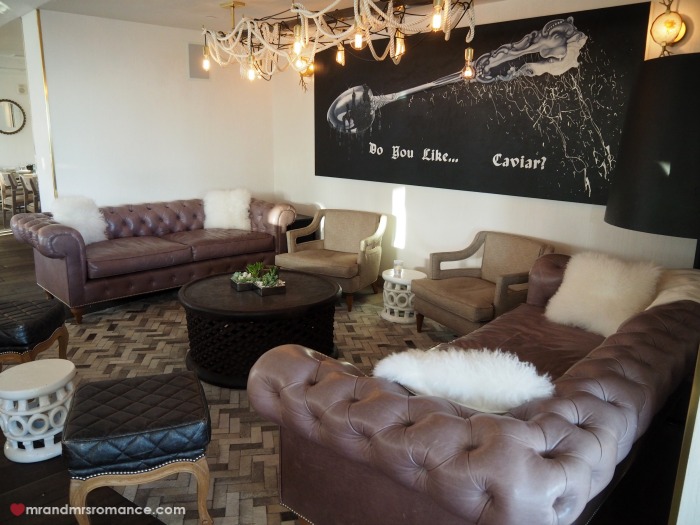 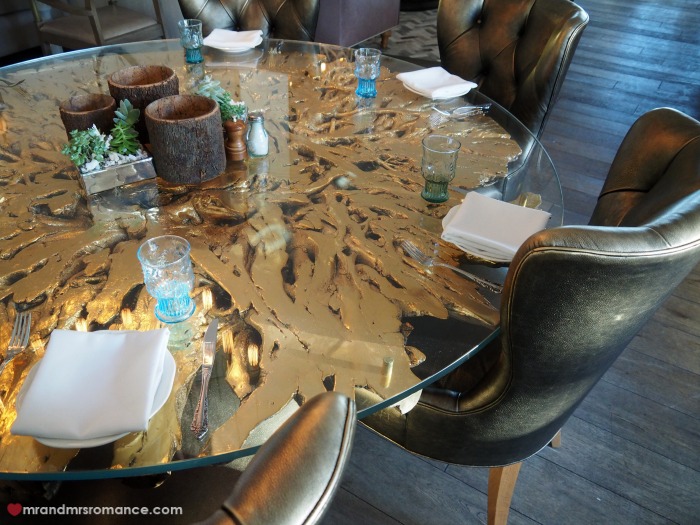 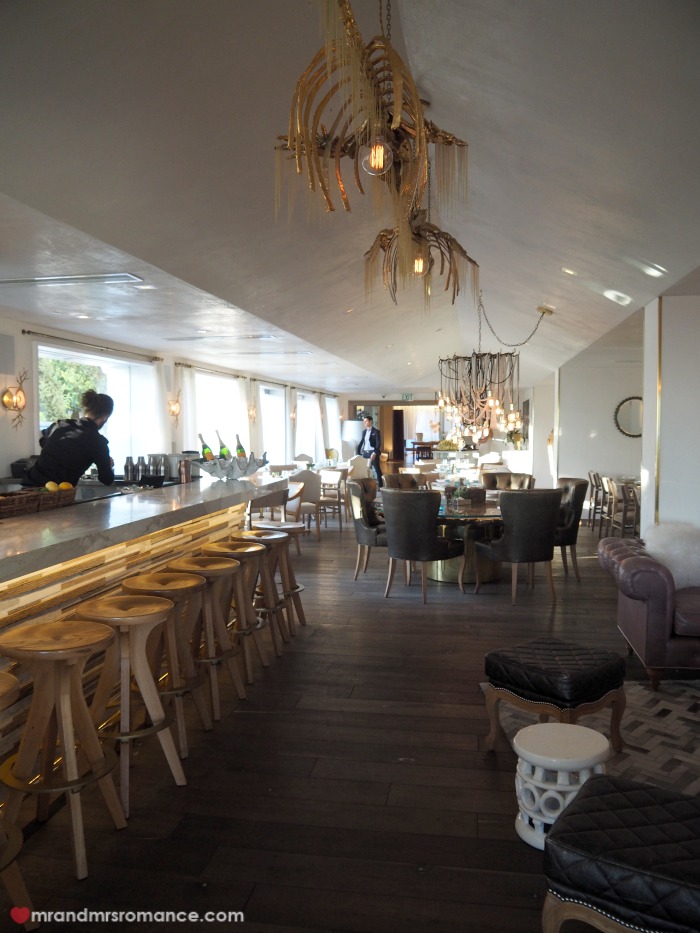 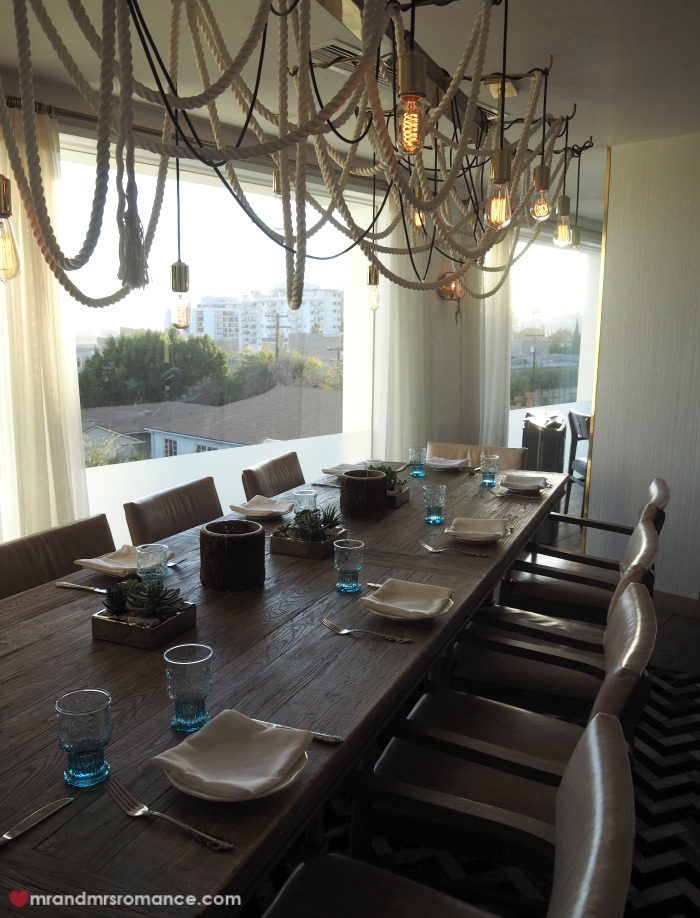 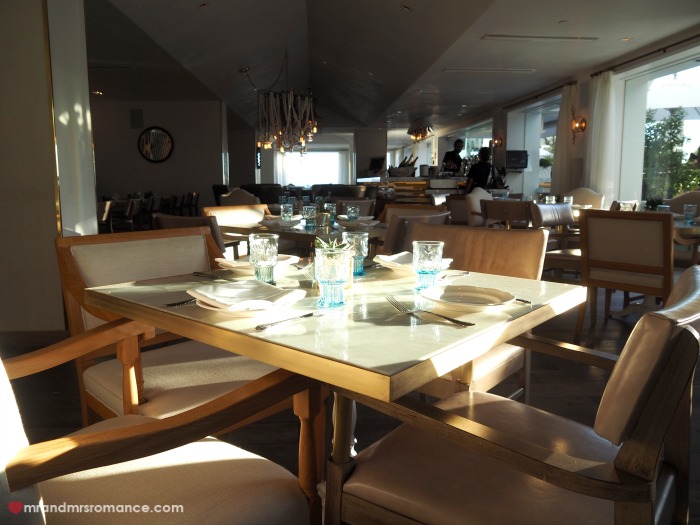 The dining room (a.k.a Herringbone Restaurant) is just as stunningly styled as everywhere else in the hotel. By night, it serves an inventive seafood menu under an impressive view of the LA skyline. By day, it hangs on the hotel’s arm, looking pretty!

We explored the hotel further.

Over the rims of our cocktails and in the safety of the Sky Bar, we looked down on the deck and pool. 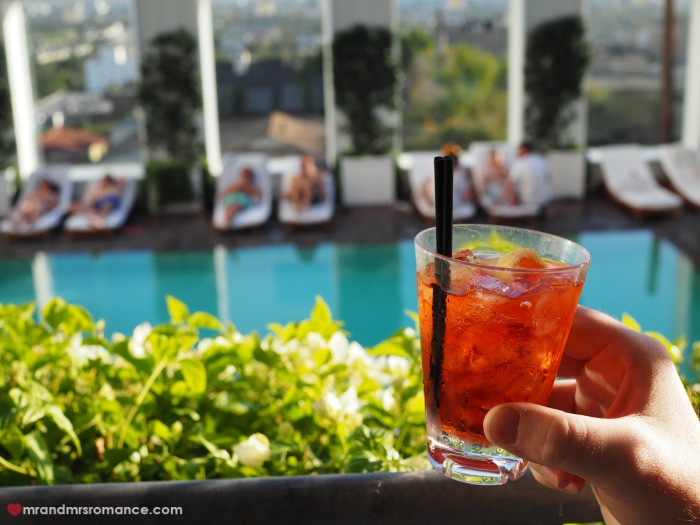 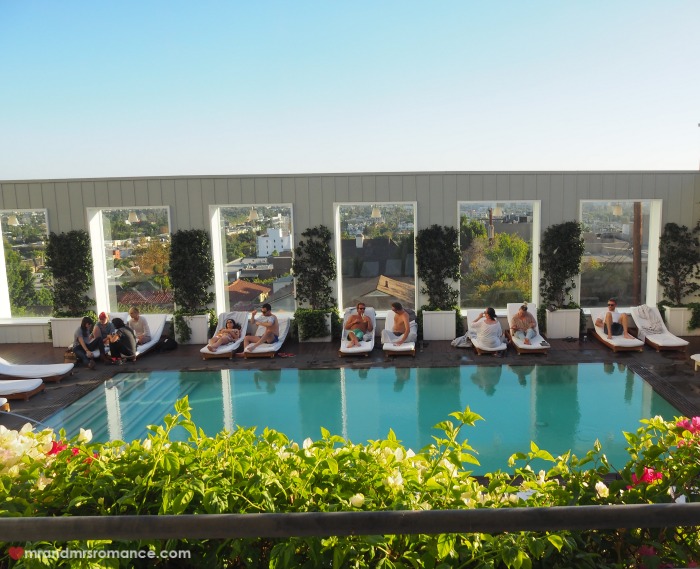 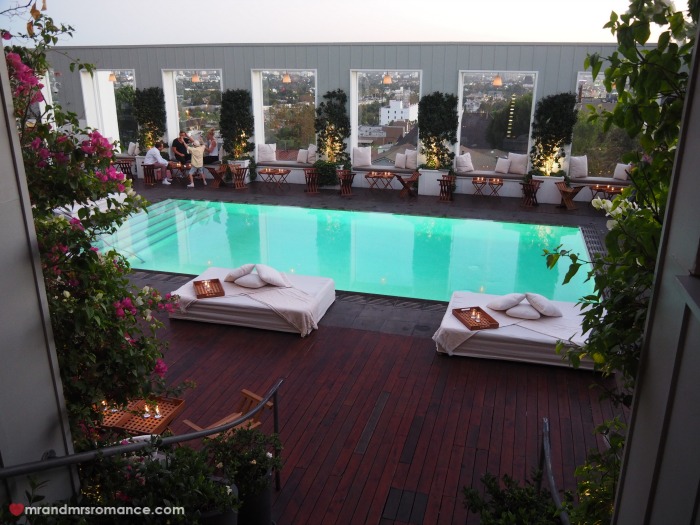 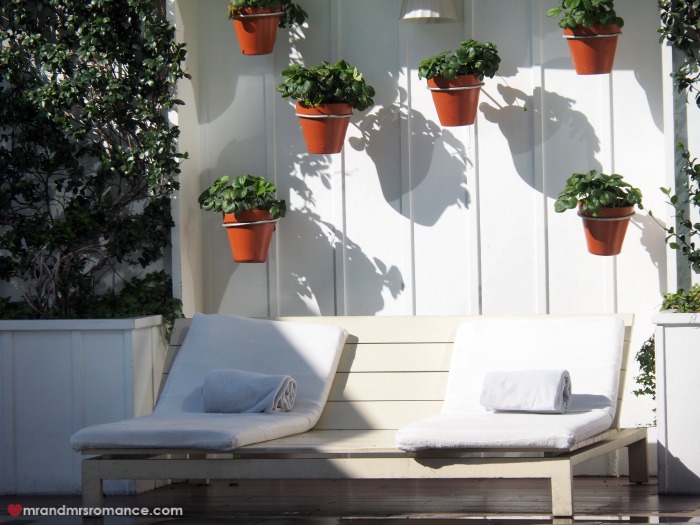 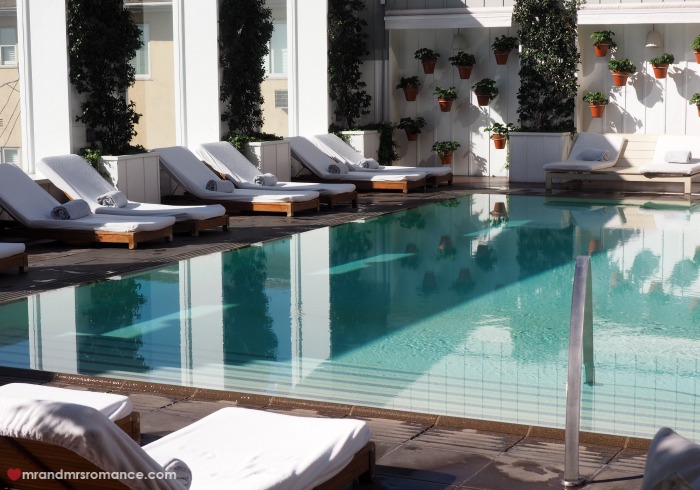 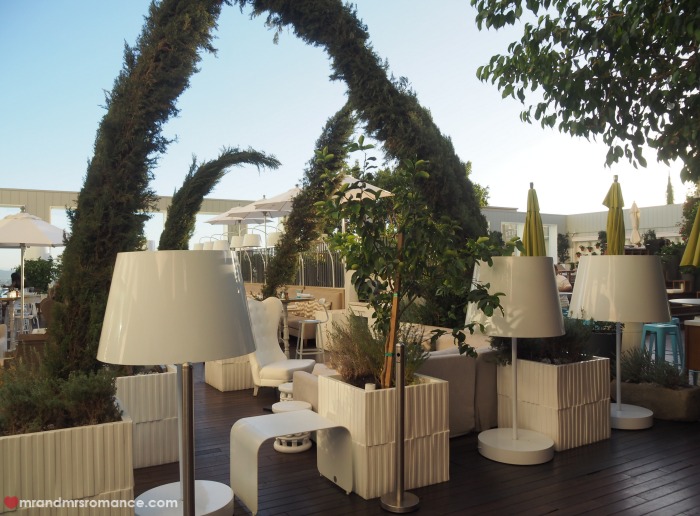 The pool area – as well as being way too daunting for two people fresh and well-fed from a Sydney winter – is like something out of a magazine.

Replete with models basking in the California sun, the raised decking and concealed-yet-completely-on-show sun deck surrounding the pool looks sublime.

Because the hotel’s on the edge of a hill, the outlook over the pool fence is pretty darn cool. 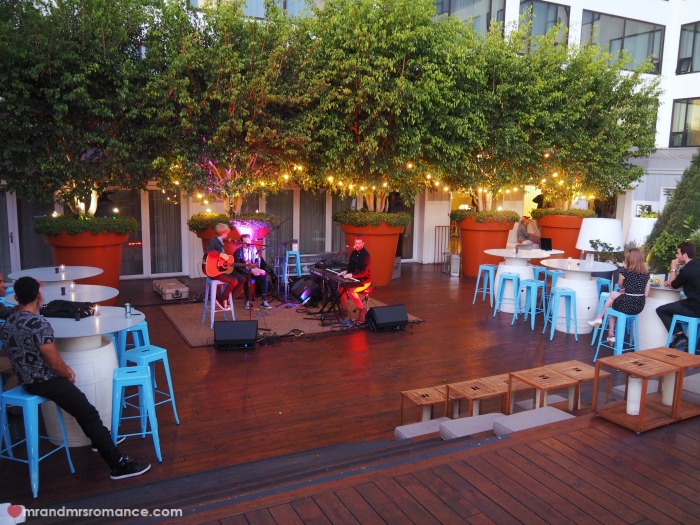 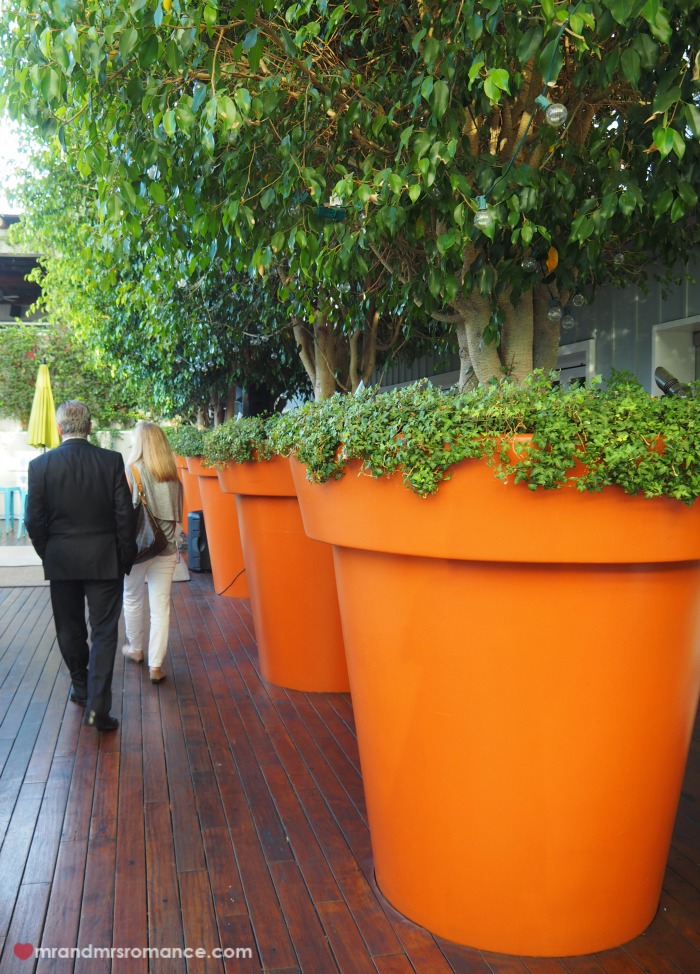 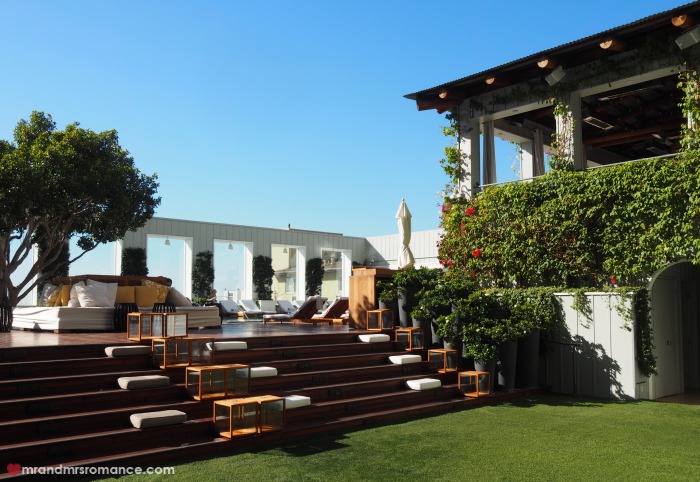 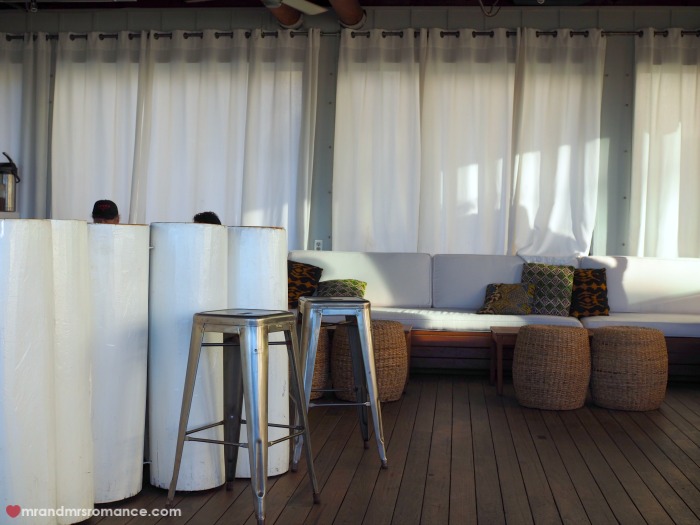 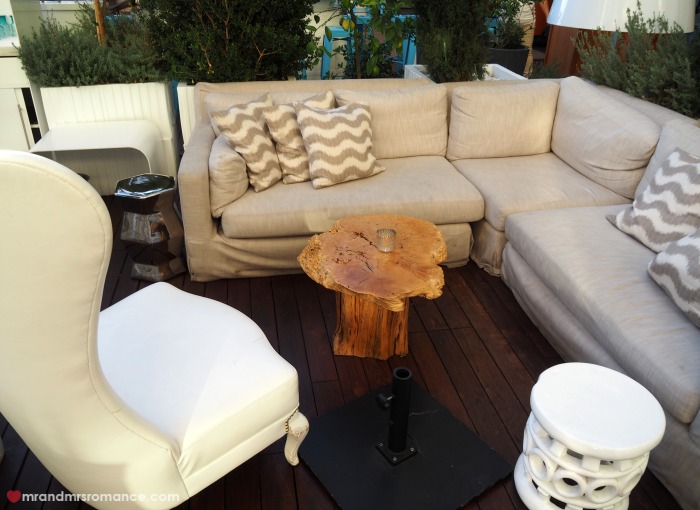 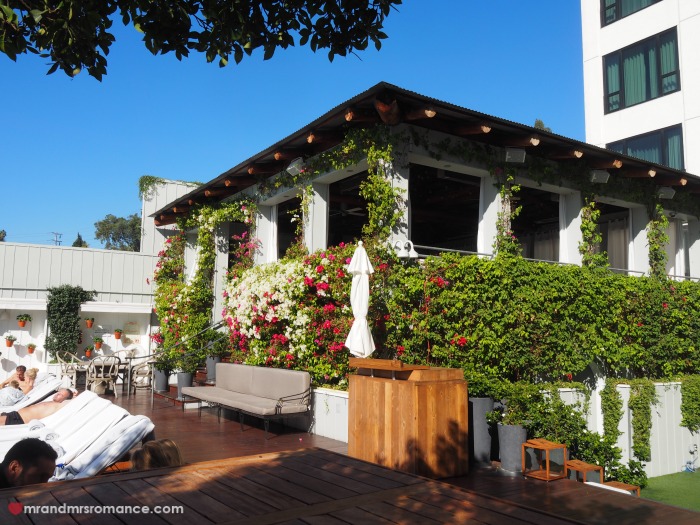 After our cocktails, we decided to head out for a stroll – an action that took our concierge completely by surprise. No one walks anywhere in LA.

When dinner was over (I had an amazing burger by the way), we walked home again. We turned the mirror on, called room service and ordered a cocktail. The only way to end a day in Hollywood!

The Mondrian may be more than you were hoping to pay for a hotel – especially for your first night in the country. However, don’t underestimate the value of that first night.

Those extra dollars pay for more than just the funky furnishings. The quality of service is superb, the food and drink here is excellent, and most importantly, you know that bed’s going to be the most comfortable thing you’ve ever slept in!

Our only criticism was of the valet. As we drove south for San Diego, we realised someone had decided our car would be a very good place to have a smoke in! It really stank. It’s a shame we we’d checked out really – I wouldn’t have tipped! 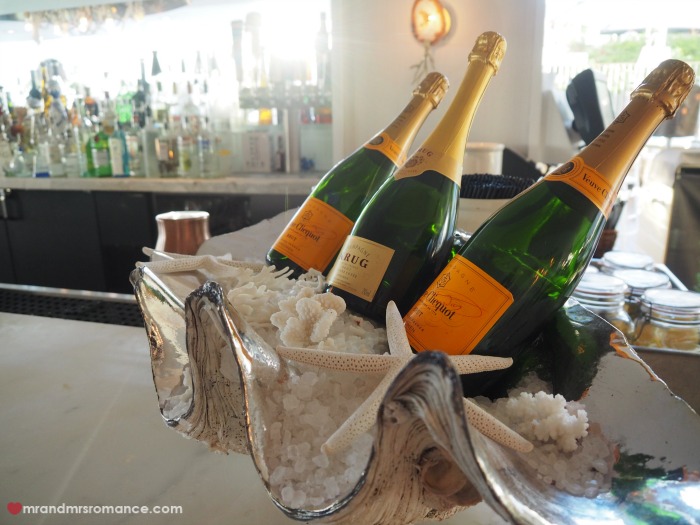 Have you stayed anywhere in LA? Do you have any tips on what to do and where to go while in Los Angeles? How do you spend your first day of your holiday? Tell us in the comments!

For more places to stay in LA and the USA, check out Creative Holidays for more travel inspiration.

10 secrets of matching wine with food

Matching wine with food sounds tricky but there are a few guidelines that can really help. Here are 10 secrets to help matching wine…