We see those red open-top buses going round Sydney city all the time. Every time I see one, I wonder who on earth would want to go on one of those things?

Well, I used to think that until I actually went on one. On our recent trip to Europe, we had a few days in Paris. We’ve been to this beautiful city a few times before, but this was the first time we’d seen Paris from so high up – and from the road.

Paris is an incredible walking city, and you can spend hours and days just wandering around its streets. But being driven from the Champs Élysées to the Eiffel Tower then all the way back across town to Notre Dame – it’s a much better way of doing things. 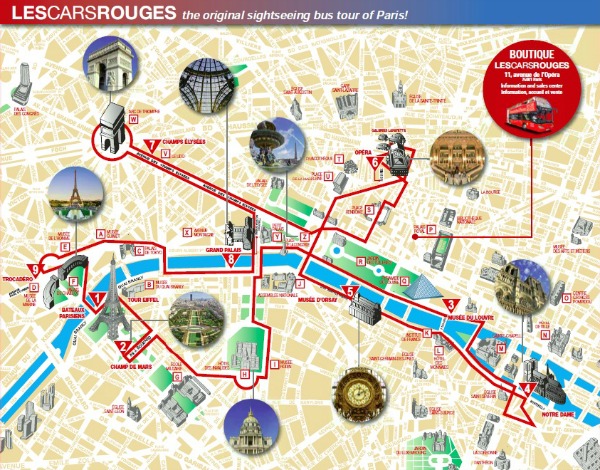 It’s more relaxing for one thing. Also you’re right up high so you get some very different views of the city. There’s also a running commentary on the history and architecture of the city if you want to use the headsets. I mean it’s not the Chicago architectural and historical river cruise, but it’s pretty good.

I think it’s a great way to experience a city – especially if you’re only there a few days. You can ride as much as you like and – as the name suggests – you can hop on and hop back off whenever you want to see something a bit closer up.

There are tours like this all over the world, Sydney, London, Colchester… Apparently the Barcelona one is really great. One year we drove to the beautiful city of Bath in south west England. We didn’t know where to go so we followed one of these open-top buses around, ticking off the points of interest on back of the bus as we went.

In the end it went down a bus lane and we had to stop shadowing it, but the route the bus took gave us a good idea of the city’s geography and its main points of interest.

I’m half inclined to jump on the Sydney Explorer and see what I can learn about my hometown! I’m sure I’ll be surprised.

Our trip on Les Cars Rouges hop-on hop-off tour was hosted by Creative Holidays. Check out their website for more information.

Have you ever gone on an open top bus tour?

Travel mistakes – 3 things we would have done differently last trip

Travel – by its very nature – is a learning process. If you’re not finding out new things either about yourself or the new…