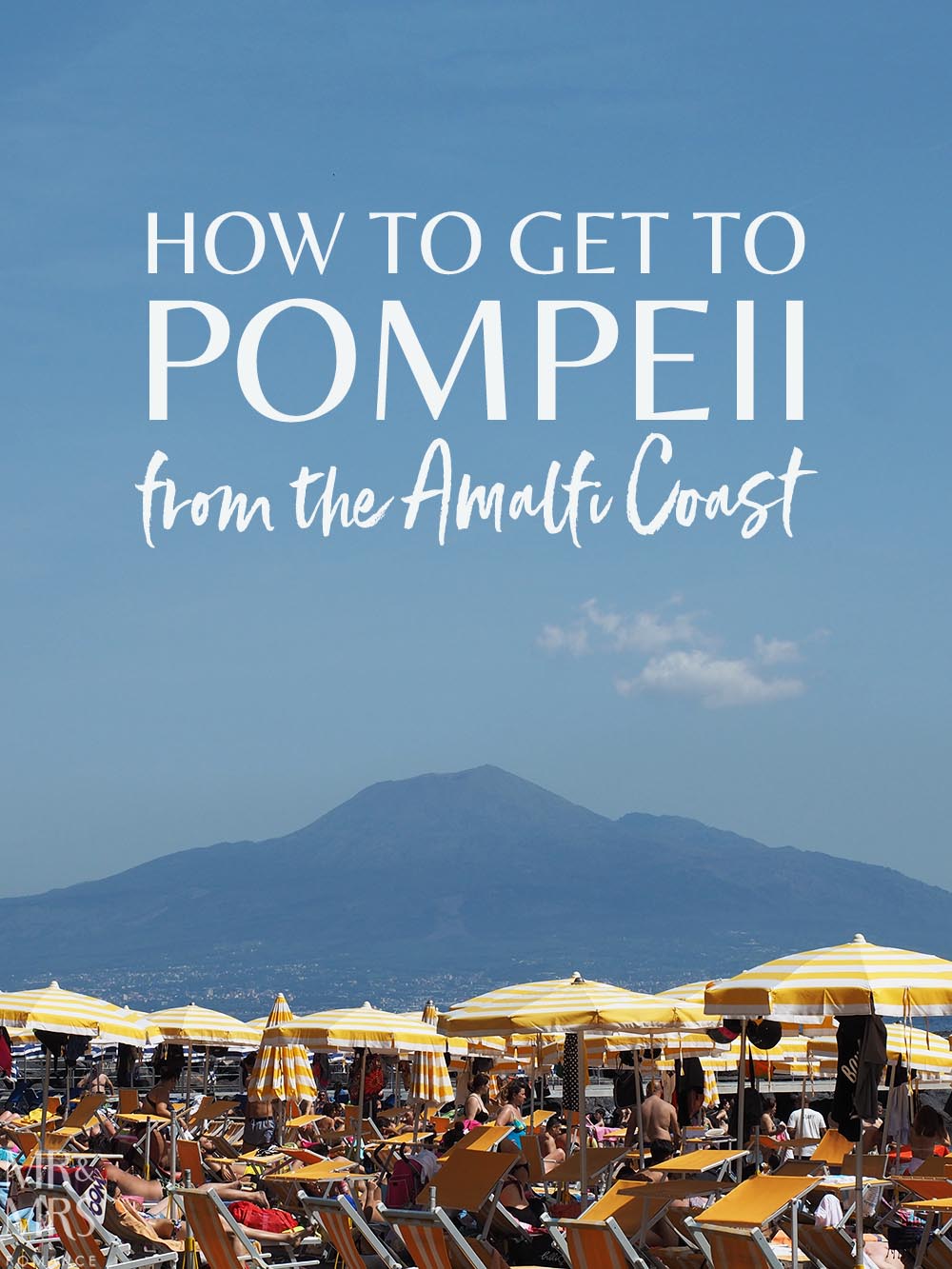 For that reason, it’s very tempting to pass on visiting important and incredibly fascinating places like Pompeii.

But you know what: it’s really not that hard.

While in the Amalfi Coast we worked out the easiest way to get to Pompeii that’s cheap, quick and with minimal stress.

Here’s our guide for how to get to Pompeii from Amalfi without a car.

How to get to Pompeii from Amalfi 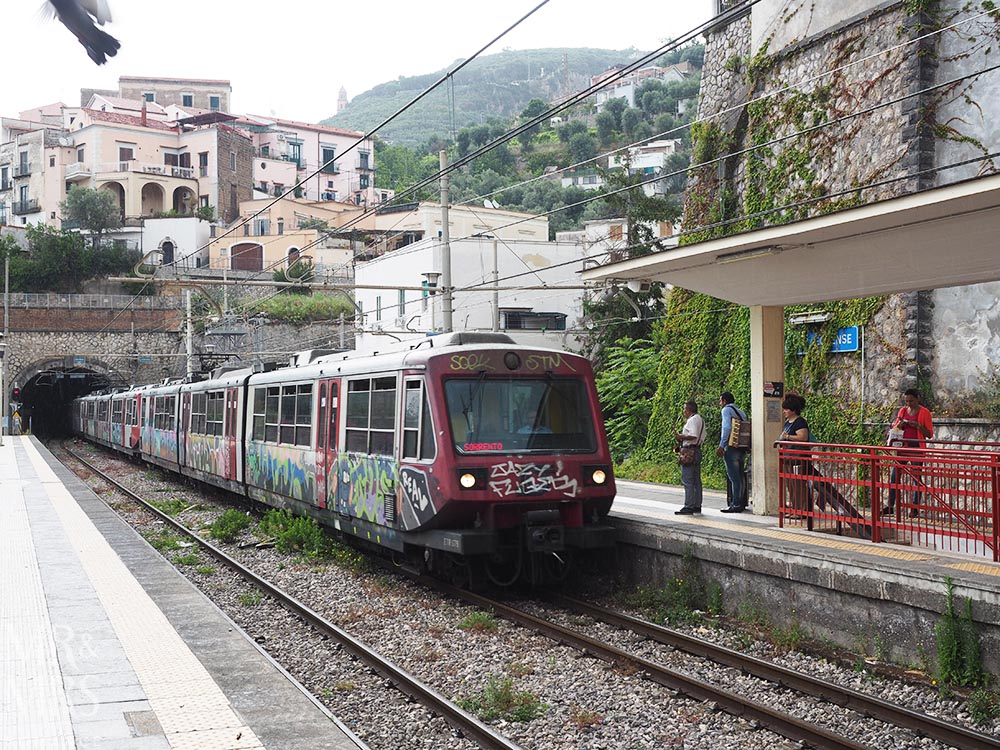 By far the easiest and cheapest way to get to Pompeii is by train.

The Circumvesuviana Service runs from Sorrento all the way to Napoli Porta Nolana with regular stops from Sorrento to Castellammare di Stabia along the Amalfi Coast. The stops are:

Which train ticket to buy

The ticketing system is familiarly Italian and unnecessarily complicated. There are 2 ticket prices because there are 2 types of train – an all-stations train and an express train.

Nothing strange about that.

Your ticket will only let you on that particular train, which is fair. The problem arises when the ticket office sells you a ticket but it’s not for the next train. They’re likely to sell you an all-stops ticket, which is cheaper but will mean you might have to wait. It will also mean – for the sake of a couple of euros, that you’re on the slow train.

The express train only stops at Sorrento, Vico Equense, Castellammare and Pompeii.

I found a site with train times and station details, though it’s an unofficial site. It does seem correct though.

Keep your ticket handy as the inspectors on the train will not let you on until they’ve checked your ticket. They will forcibly stop people trying to get on the appropriate train.

You will only be able to enter and exit the train where the inspectors get off to look at people’s tickets – usually the front compartments. Stay close to the inspectors when you get off for a quicker exit! 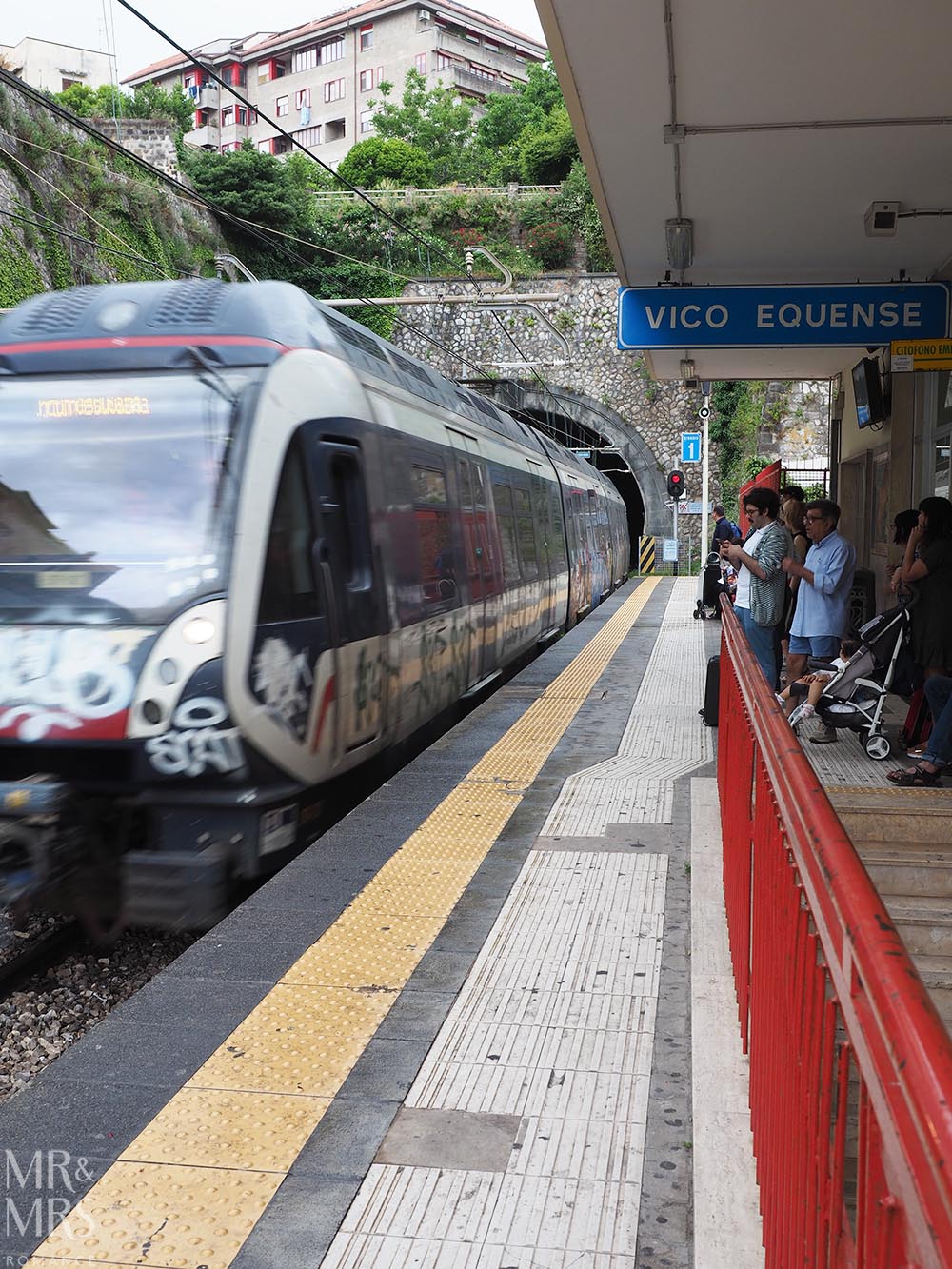 Be careful where you sit or stand on the train

The trains that run the Circumvesuviana Line are usually very old. They rarely have air conditioning and are rattly and falling apart. We saw sections of the compartment literally fall off and hit passengers on the head on 2 different occasions (and 2 different trains) going to and coming from Pompeii.

Avoid standing under the lower parts of the train compartment and have a good look at the ceiling where you’re standing. If it looks loose, move.

Travel in the front carriage. The inspectors usually enjoy travelling with the driver, so they leave the door open. You get a good view out the front of the train, which makes the trip go quicker. 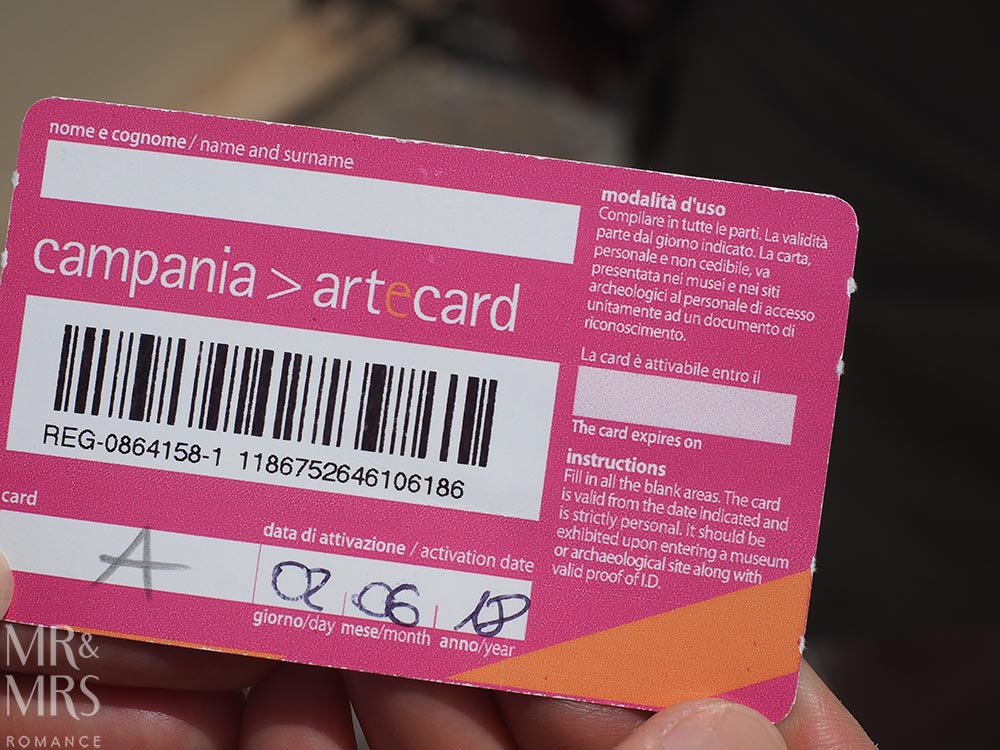 If you want to save money (and time at ticket offices) and you intend to see a lot of different attractions in 3 days, the Napoli 3-day Campania>artecard is great.

The Campania>artecard allows you access into a huge number of attractions – including Pompeii, Herculaneum and the Museo Archeologico Nazionale di Napoli, where most of the original artefacts from the digs are kept.

It also includes your public transport fairs anywhere within the UnicoCampania system, which is the Circumvesuviana Line to Pompeii.

You can pre-purchase the card online here – it’s activated from the first time of use (public transport or attraction).

This is great value if you’re planning on going to lots of different places. We only visited Pompeii, which was a full day by the way, and then visited the Museo Archeologico Nazionale di Napoli when we were in Naples. So the Campania>artecard would have worked out more expensive for us. 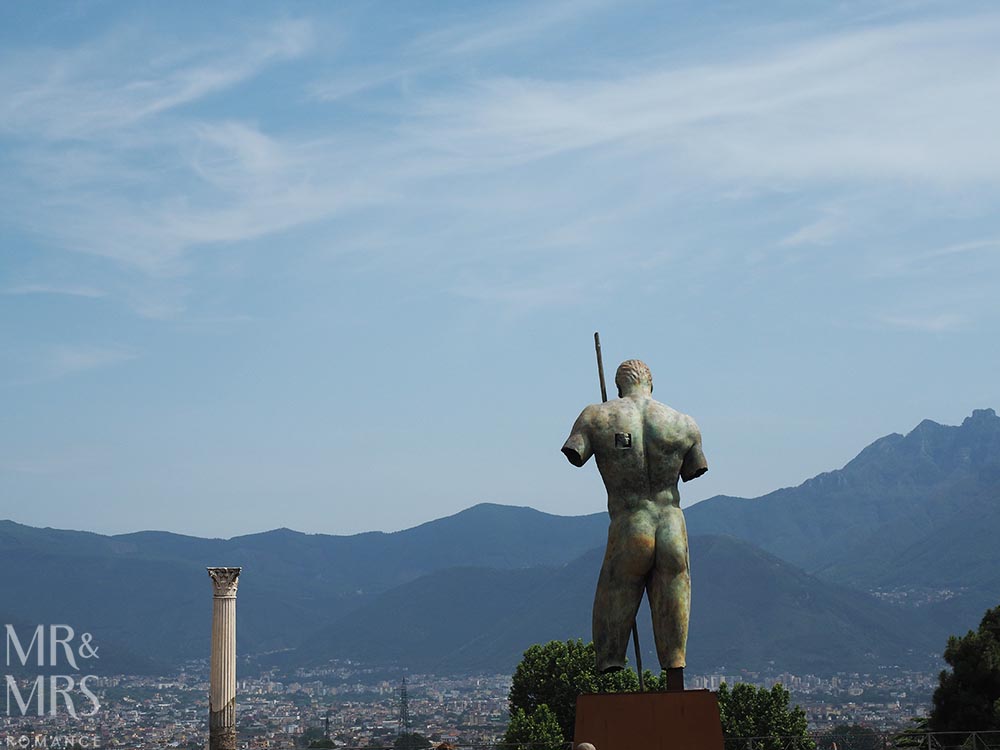 It’s a bit of a scrum when you arrive at Pompeii Scavi – Villa dei Misteri, as everyone wants to be first in line at the gates – not a thing by the way.

Feel free to take your time at the station, and whatever you do, don’t go with touts at the station for entry tickets to Pompeii. They’re just travel agents and will rip you off.

Go up the road (follow the signs) and buy tickets directly from the office.

You can buy tickets to Pompeii and Herculaneum online here at the official site – though it’s once again annoyingly complicated to find the page. The links are at the bottom and the page is only in Italian.

If you’re hungry or thirsty when you arrive at Pompeii, don’t be afraid to stop at one of the café bars on the road to the site entrance.

We were forced into one of these places because of a rain storm, and the food, drink and service turned out to be great. And the prices weren’t insultingly high either, which surprised us.

The Perfect day in Capri

Our library of posts on Italy 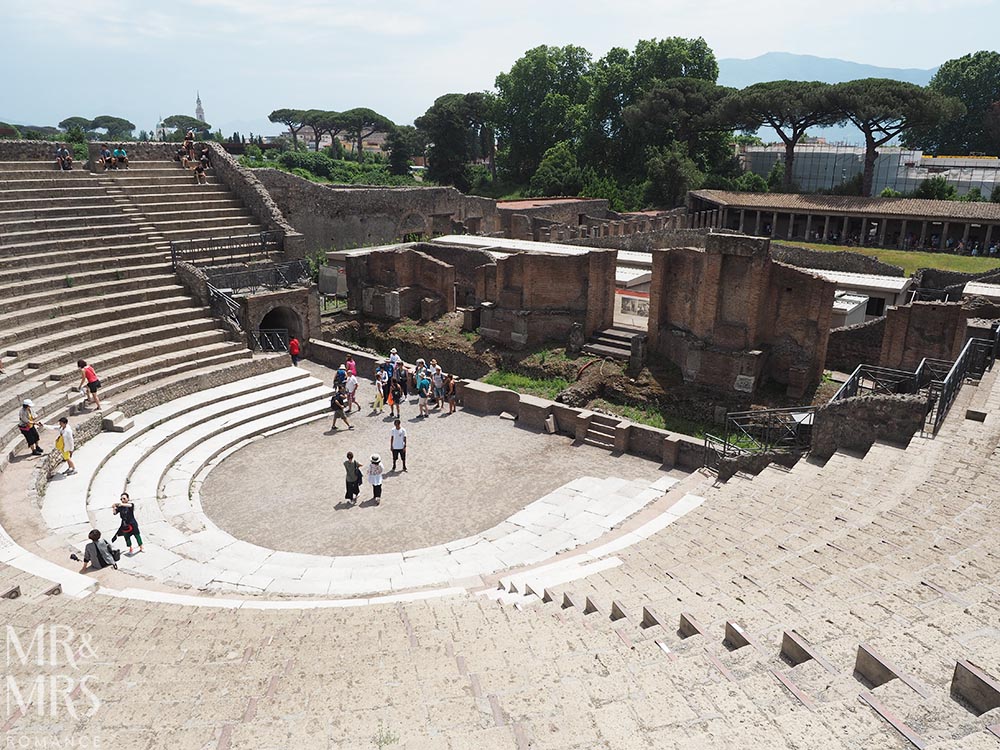 Do you have any other tips for visiting Pompeii? We’d love to hear them. Pop them in the comments section below!

It used to be that there were just three types of beer in pubs: a pale fizzy one, a dark not so fizzy one…