Imagine standing at the Trevi fountain, staring into the stone eyes of the gods, eating on the best damn gelato you’ve ever had. Got it? Well it’s not such an impossible dream. 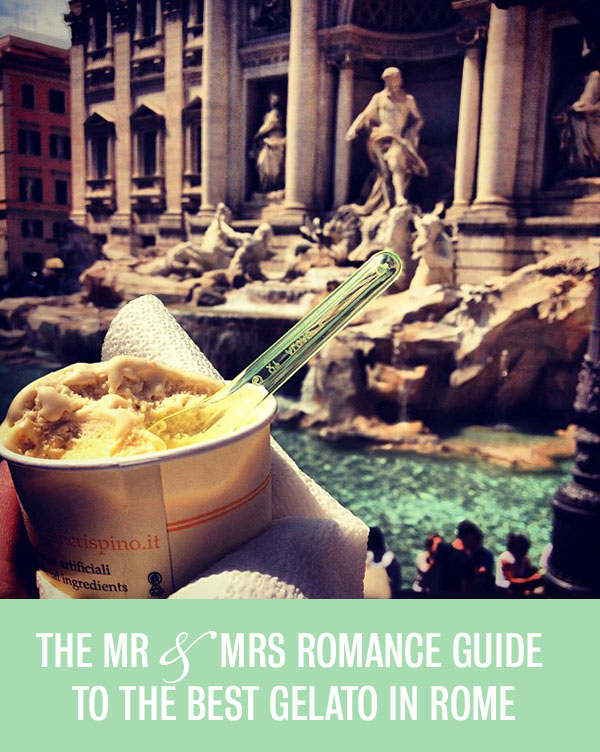 We thought we could bring you one step closer to realizing your dream by finding the best places in Rome for gelato.

So here’s the Mr & Mrs Romance guide to the best gelato in Rome to help guide you through the tourist hordes. We also give you the insider tips to order like a local.

Via Uffici del Vicario, 40, near the Parliament Building

This gelateria opened in 1890 and has a beautiful history. It’s a mecca for tourists but if you can avoid the groups you’ll find the gelato worth queuing for.

Order a coppa (cup) or cono (cone) at the front counter and take your receipt over to the gelato counter to place your order. Join the queue to pay first, then take your time to choose your flavours. Then wander the beautiful nearby streets with your gelato.

Via della Panetteria, 42, near the Trevi Fountain

This hole in the wall gelateria is legendary. You’ll most likely spot it by the queue of people lining up out the door. There are no cones, only cups and it’s priced by the size of the cup. You can have multiple flavours in a cup.

Enjoy the queue as you need the time to decide what flavour to choose. San Crispino is a traditional gelateria and the gelato is stored in silver containers so you can’t see the product. There are no indications as to which is which so you need to remember the flavour you want from the sign at the front door.

Via del Lavatore, 85, near the Trevi Fountain

If the queue at San Crispino is too crazy, try Gelateria Da Cecere.

Not on the usual tourist trail, this is one of the oldest gelaterias in Italy. Ask for ‘panna’, the delicious cream, on top of your gelato.

It’s rare we’ll recommend a chain store, but Grom is popping up all over Italy and is worth trying. There are six locations in Rome, so you’ll probably stumble across one in your travels. They focus on the provenance and quality of their ingredients and do monthly special flavours. Try the Granita Siciliana, it’s like a delicious Italian slushie.

Capital letters between the /marks/ mean you need to stress this sound. And remember, if you see an ‘r’, try to roll it with your tongue. You might think you sound silly, but without it, the Italians won’t understand you!

Image and translations by Mrs Romance.

In and out of Africa

Few words can express how excited we were to be travelling to South Africa. It’s been a place that’s sat on our travel bucket…