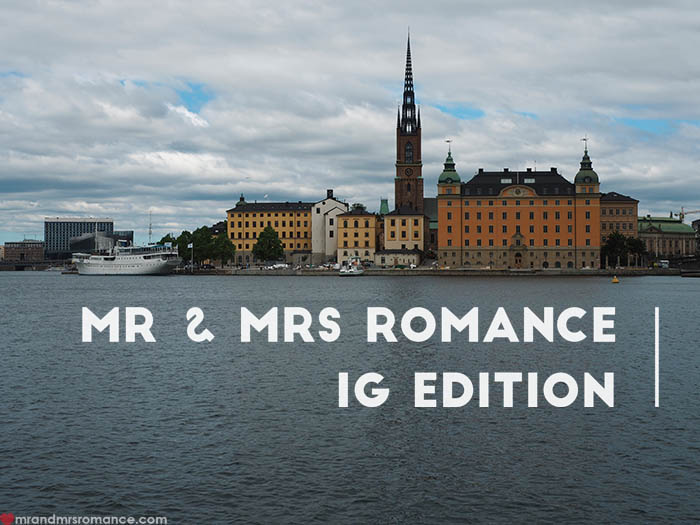 Puglia in Italy’s southwest was so beautiful – if you don’t believe me, check out our stories here and here – but the next stage of our journey is just as inspiring.

In this IG Edition, we fly north to see what Sweden has to offer. Our friends in Stockholm have invited us to stay with them, so we’re super excited about catching up with them.

Through a random turn of events, we also find ourselves in Brussels and discover why the Belgians have been keeping their capital a bit of a secret for so long.

And this could well be the answer to our question. What makes Stockholm and Brussels such great travel destinations? Perhaps it’s the fact that the locals have tried to keep the best bits a secret for so long.

In both of these great cities, there seem to be very few tourists considering they’re so well known and so full of beauty and culture. And considering it’s pretty much mid summer now.

We hope you enjoy this IG Edition. Speak to you again soon 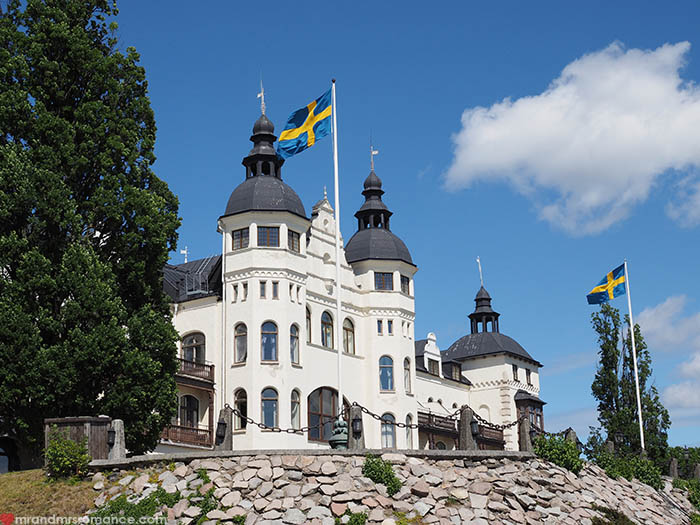 The Grand Hotel Saltsjöbaden is such an iconic building right on the water southeast of Stockholm city. We’re exploring a bit of the coast with our friends today and this building, which has been here since the late 1800s, is definitely a standout.

There’s also an amazing lunch spot near here we’ll tell you about a bit later. 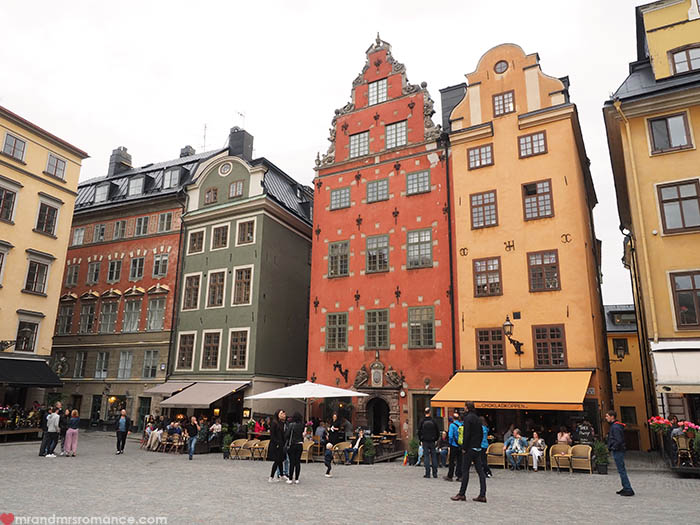 We’ve walked right into the heart of Stockholm old town – Gamla Stan – today. This part is probably the most touristy part of the city, but it’s also so enchanting. The buildings here are beautiful and this square becomes a huge market over Christmas time. 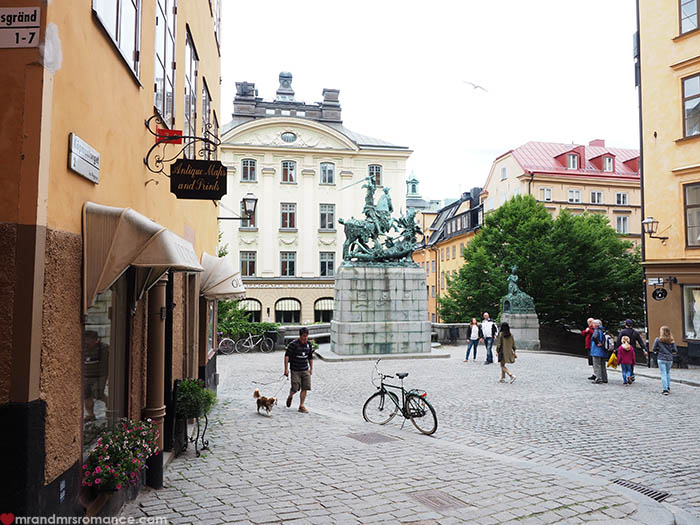 Just round the corner to the square is this statue of St George slaying the dragon. To the right of it is another statue of the princess he’s saving.

This is a 100-year-old replica of the 15th Century original which is made of wood and resides in the Great Church of Stockholm. It’s thought to be an allegory of the story of the Battle of Brunkeberg where the Swedish defeated the invading Danes. Now St George is a strong symbol in Swedish culture. 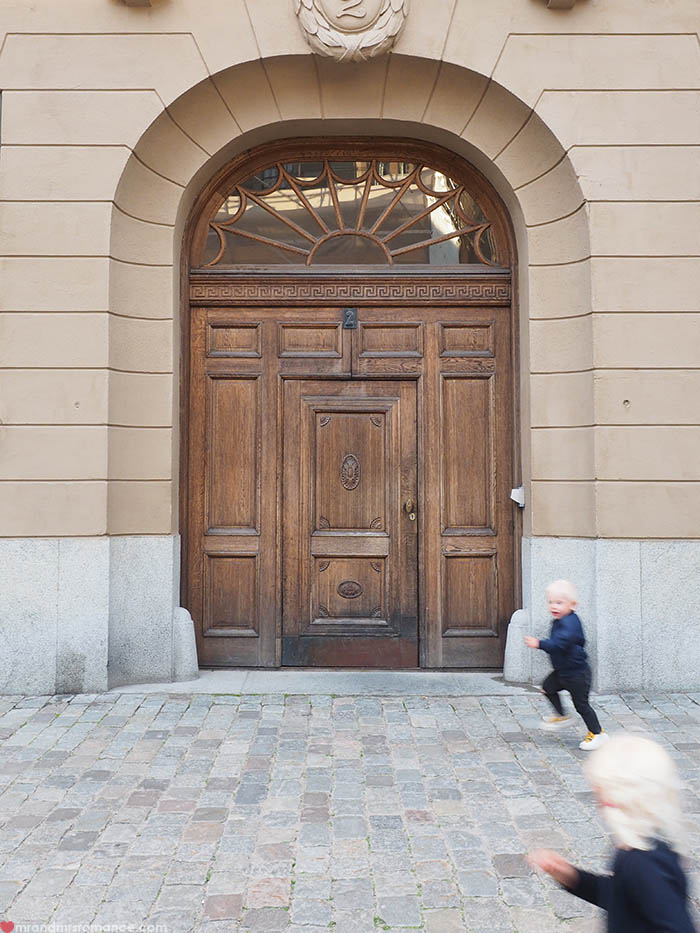 As you may know, Mrs Romance has a deep fascination with photographing doors and Stockholm has beautiful doors in abundance. And if you were ever in any doubt where this door was in the world, the little blonde-haired munchkins running around here should give you a clue! 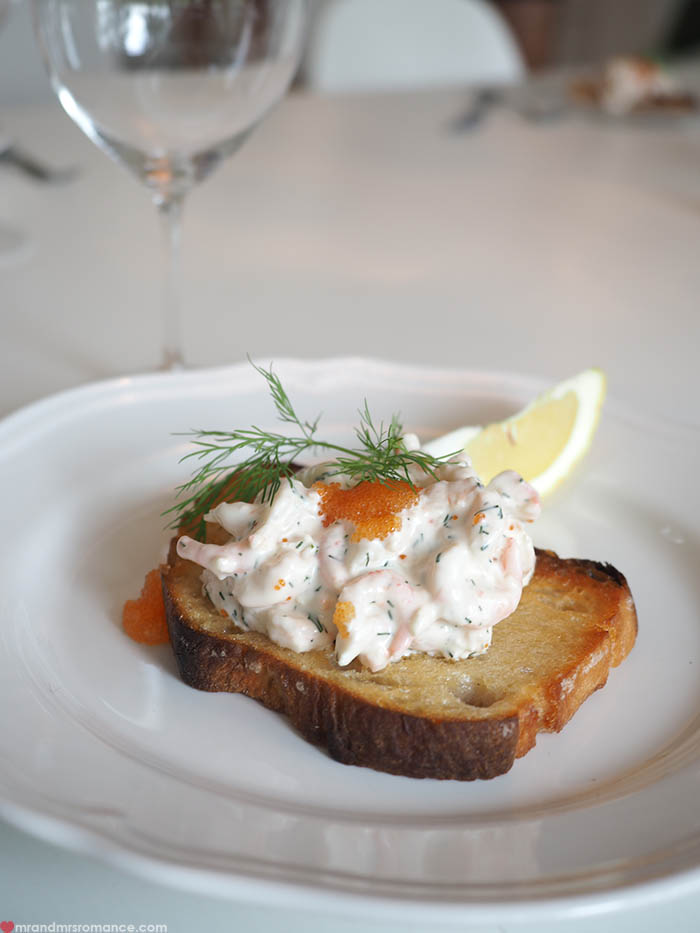 Tonight our friends have made us a traditional Swedish dish called Skagen. It’s a kind of prawn salad with fish roe and special toast. 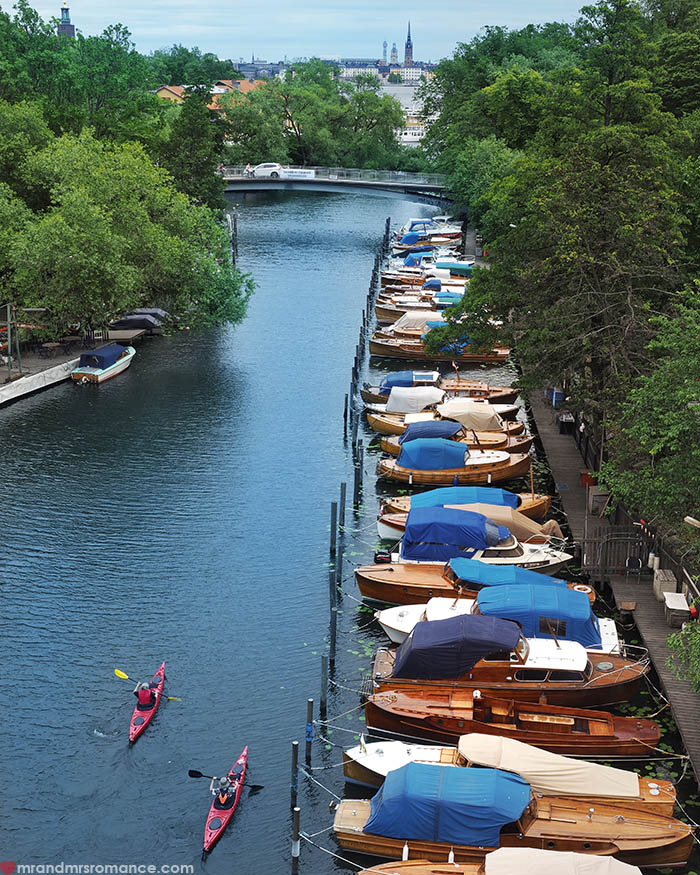 We love walking around the coastline of Stockholm. The views out over the bridges and from the banks of the estuary and its stunning network of waterways. The spire you can see in the distance is the tallest point in Gamla Stan – Stockholm’s old town. 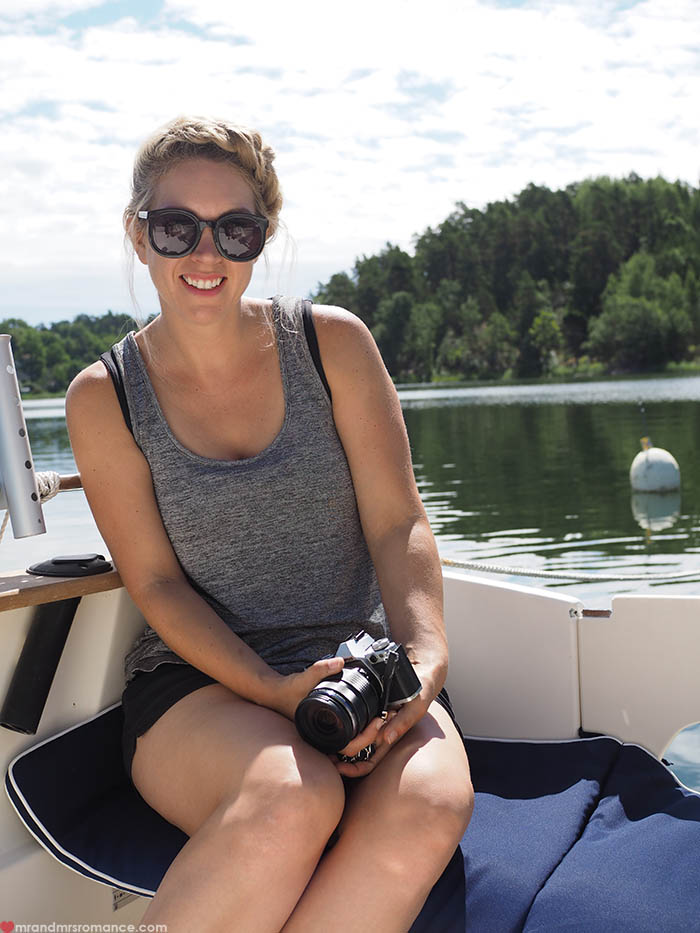 Our friends have taken us out on their boat today to get a better look at Sweden’s waterways. I think Mrs Romance is pretty happy with the deal. We’ve also scored on the weather front. Such beautiful sunshine. I’m glad I didn’t bother packing my warm coat for this trip! 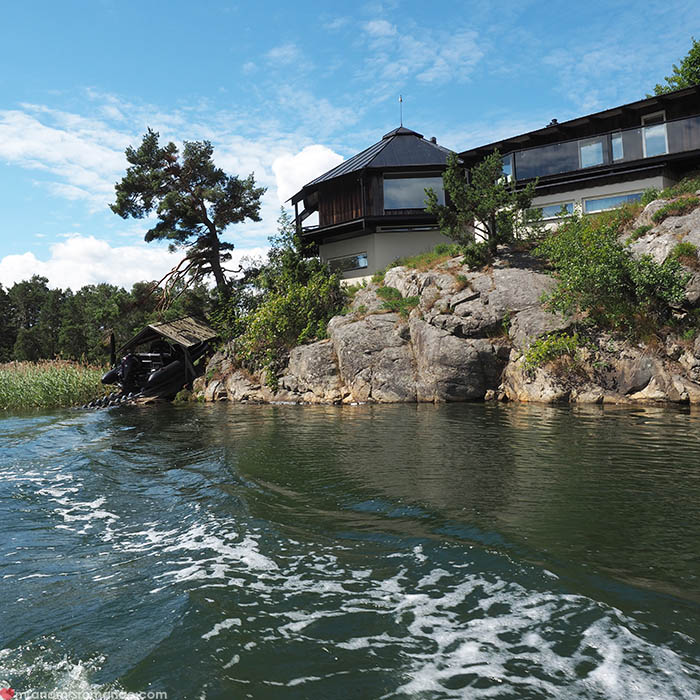 Sweden’s architecture is so full of character and so iconic. Everything they build here just oozes style and simple sophistication. Add to all that a perfect water view and you’ve got yourself quite the life. Mrs Romance is going to have a sore arm tomorrow with all the pointing she’s doing on this boat ride. 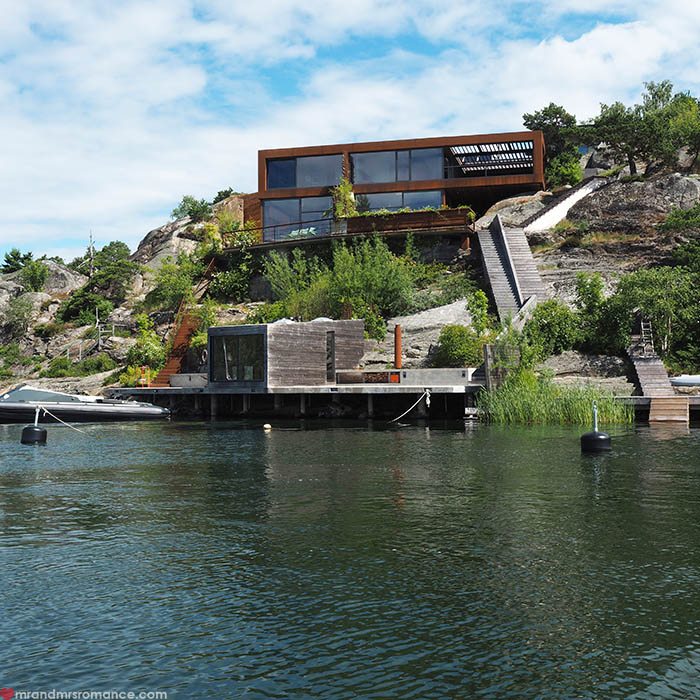 This is Mrs Romance’s (and our friend’s) absolute favourite house on the water. It’s so Swedish modern it’s like the designer wrote the textbook on the style.

We’re trying to imagine what would happen if any of these houses were on Sydney Harbour. Living there would be horrible because the lifestyle magazines would hound you constantly. 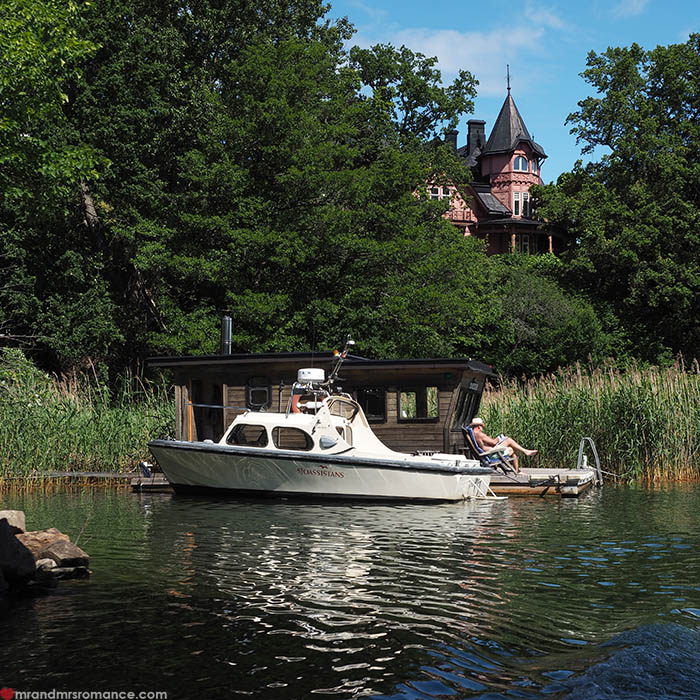 And if this isn’t living the life, I don’t know what is. As we sail past this beautiful old house on the hill we spot the owner right on the water outside his sauna. Yup, that’s right. That’s just his sauna room! 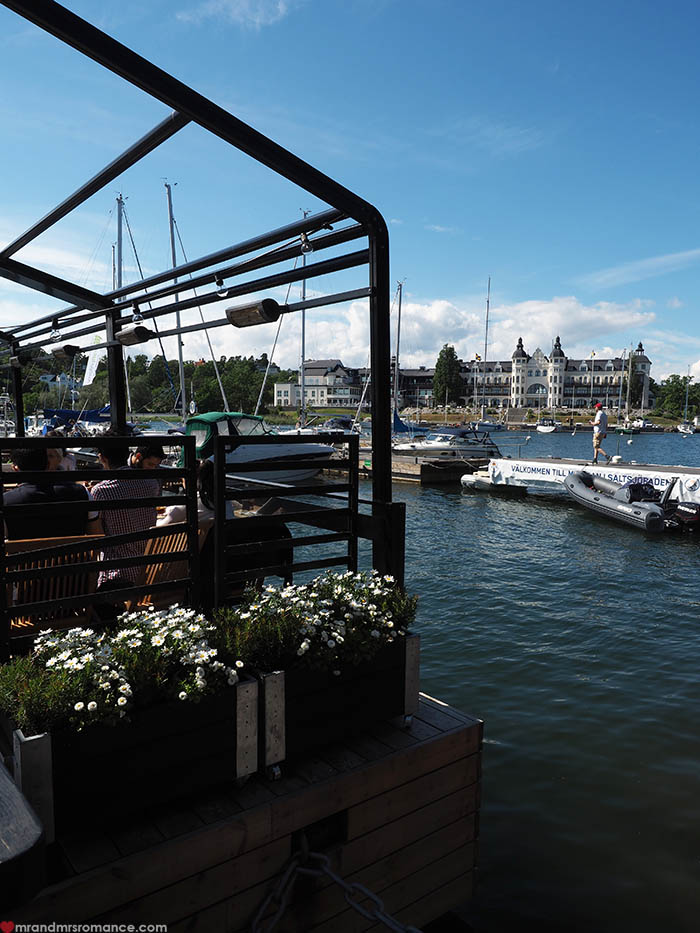 We’ve wandered down to the water’s edge for lunch today. This is Holmen Kök & Bar and it’s perfect. Thankfully pretty much every Swedish person speaks English now because this is pretty far off the tourist trail. We’re the only non Swedes in the place, which is just how we like it.

The sun is shining, we’re with our amazing friends and the food in Sweden is right up my alley! 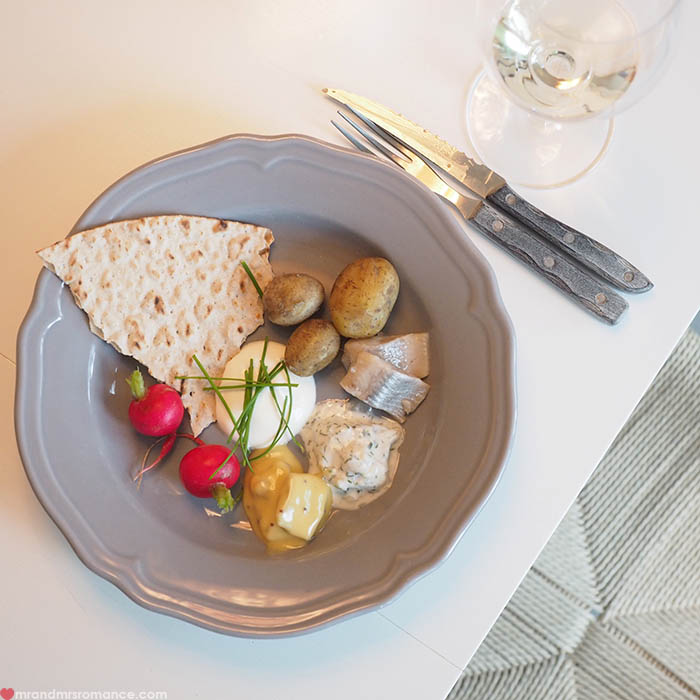 Another typical Swedish dish from our lovely friends tonight: we’re getting to try sill, which is a dish made with herring. There are three different types here in different sauces. It might not be for everyone, but we love this stuff.

Our friends have also served it with traditional accompaniments of new potatoes, creme fraiche, radishes and knäckebröd – the hard flat bread you can see. 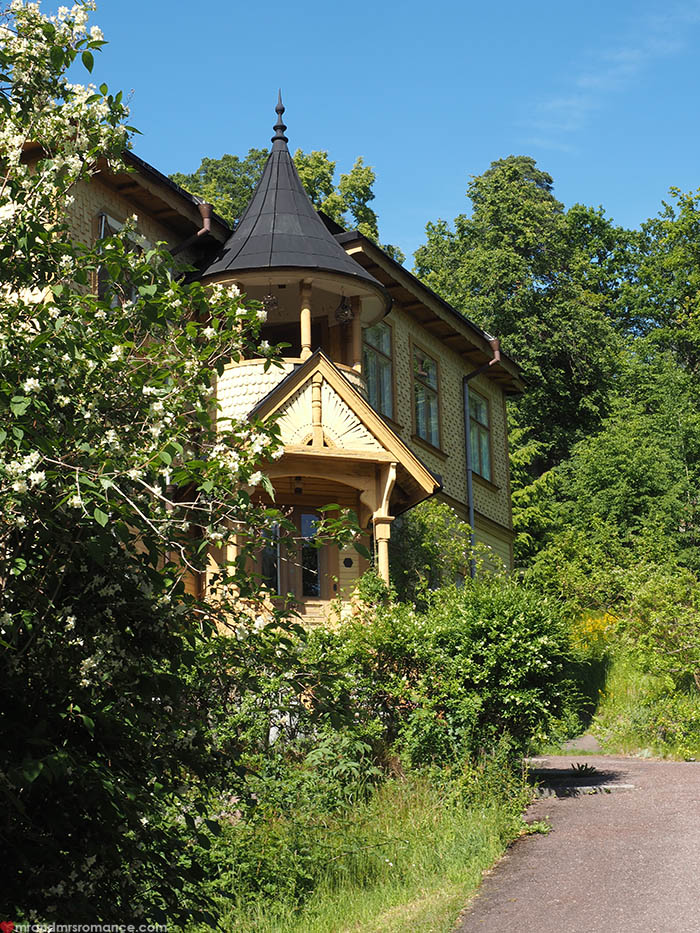 Thank you, Sweden – and thank you to our lovely friends too. We’ve had a blast in Stockholm. Everything – the food, the culture, the people and especially the architecture have us totally sold. Better start learning Swedish now! 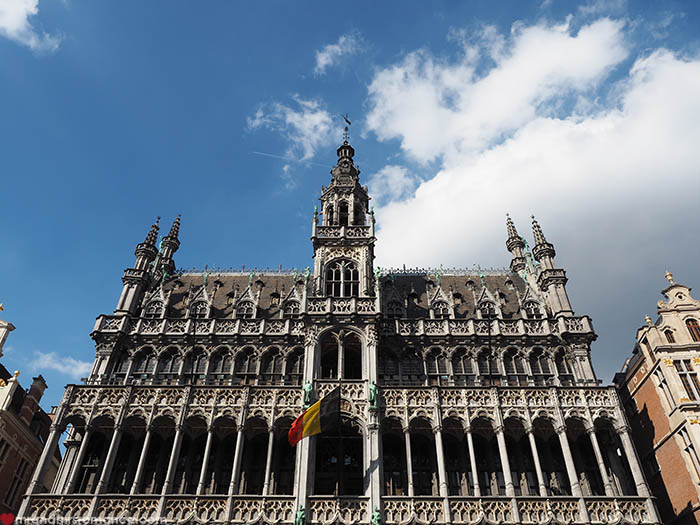 We’re here at our next stop: Brussels.

And since we’re here, we’ve decided to have a couple of nights in the Belgian capital.

It’s turning out to be a brilliant decision.

This is the old Brussels Hotel de Ville or town hall, which was built in – wait for it – the 1400s. It’s in the biggest square in Brussels, aptly named the Grand Place. It’s also right where we’re staying – in a 17th Century building, which not only overlooks this fantastic square but is also connected to a chocolate shop. 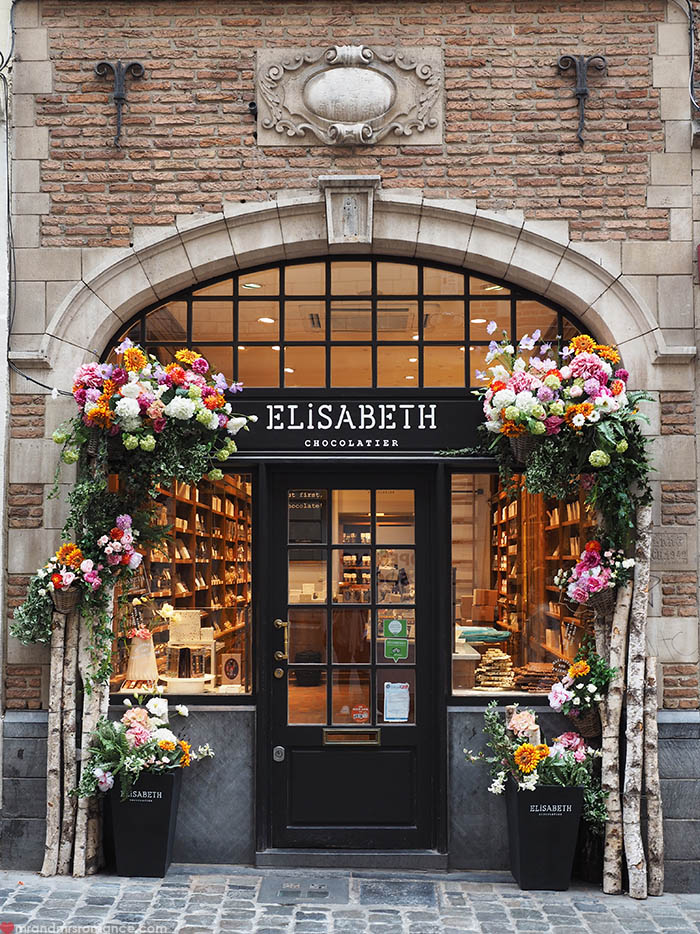 Talking of chocolate shops, this is probably one of our favourites. All the way down the Rue de Beurre (the Butter Road) the street’s lined with chocolate and beer shops. It’s like we’ve come home! 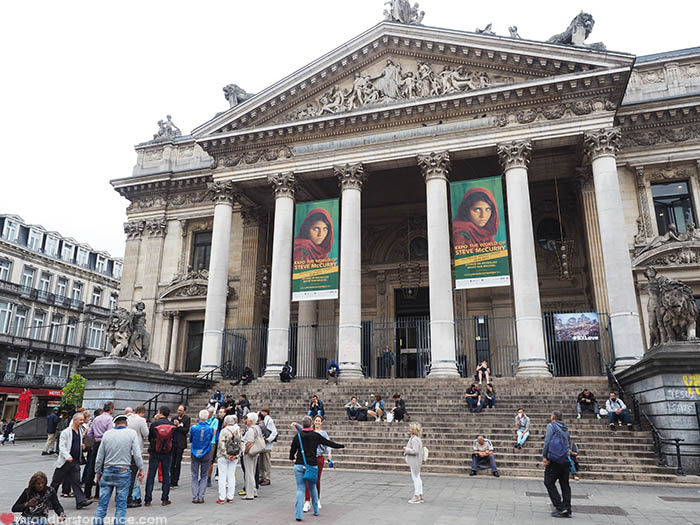 We’ve come to the very grand Palais de la Bourse to see the Brussels exhibition of Steve McCurry’s works. You might recognise the haunting shot of the young Afghan girl on the posters here. There are other shots that McCurry has taken that are even more startling. 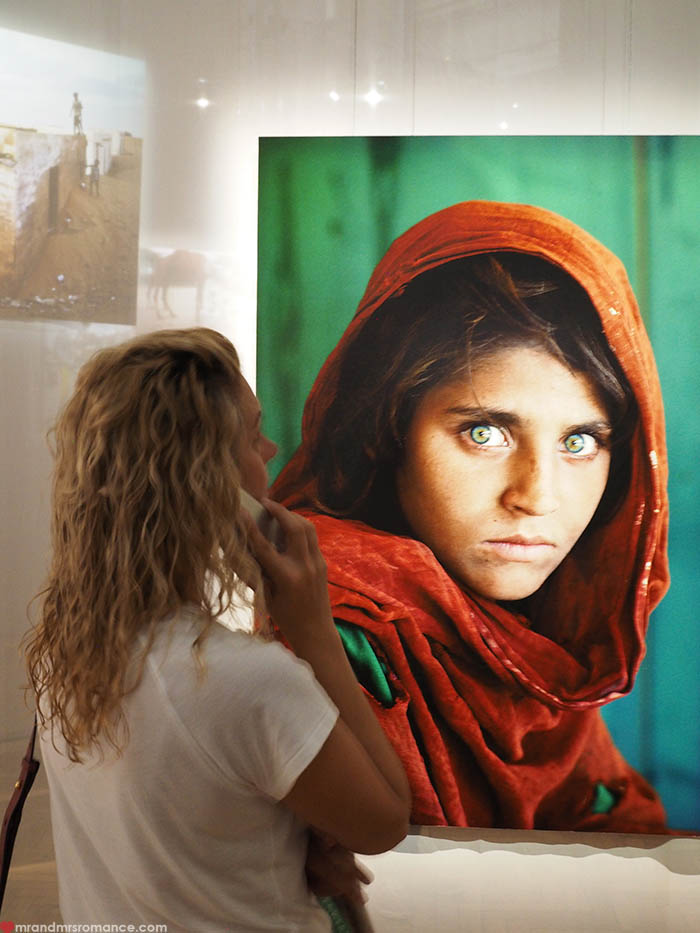 And here it is – the photo that has won such acclaim. It’s history is quite fascinating and even better told by McCurry himself. The museum has a great commentary system with around 50 of his photos explained by him that you can hear as you walk around the show.

The display is so exquisitely done: each image is hung on thin fabric that shows shades of the images throughout the gallery. The lighting is perfect and the layout is like a beautiful maze. 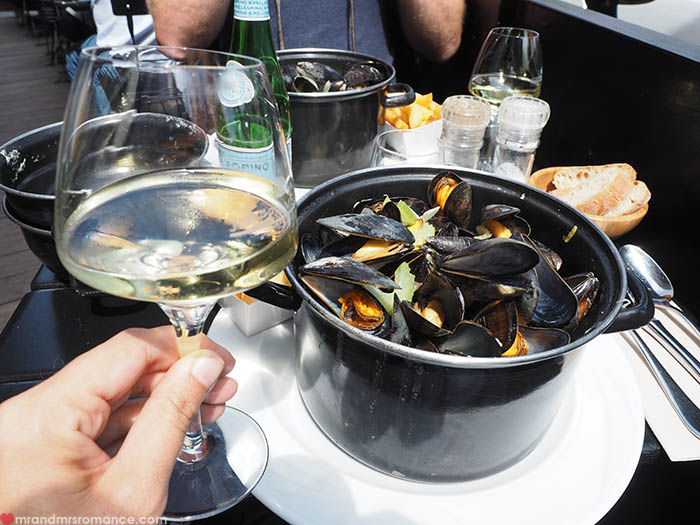 Lunch in Belgium can mean only one thing: mussels.

We’ve walked a long way this morning, so we’re treating ourselves. And the long walk has taken us a long way away from the main tourist hub – our favourite thing to do.

The food at Chez Jacques is sublime – there are so many mussels in our pots we’re stuffed by the time we finish. With a glass of wine this has been one of the most affordable lunches of our trip. Perfect! 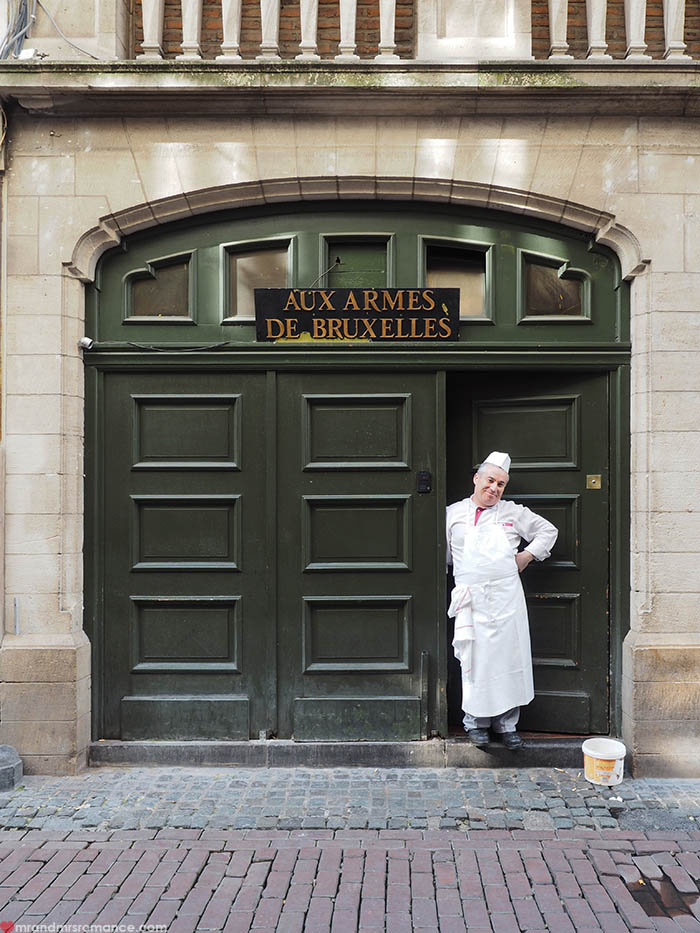 Mrs Romance is really finding her flow with her street photography. This chef was just taking a quick break from his work when she took this. This is also the second photo she took – the first one he put his thumb up for the shot.

It’s a good tip to thank the person you’re shooting if they pose like that and they’ll usually put their hands down. Then you can grab a second shot. Sneaky stuff!

If you want to see some more photography tips from Mrs R, check out her post on how to take your travel photography to the next level here. 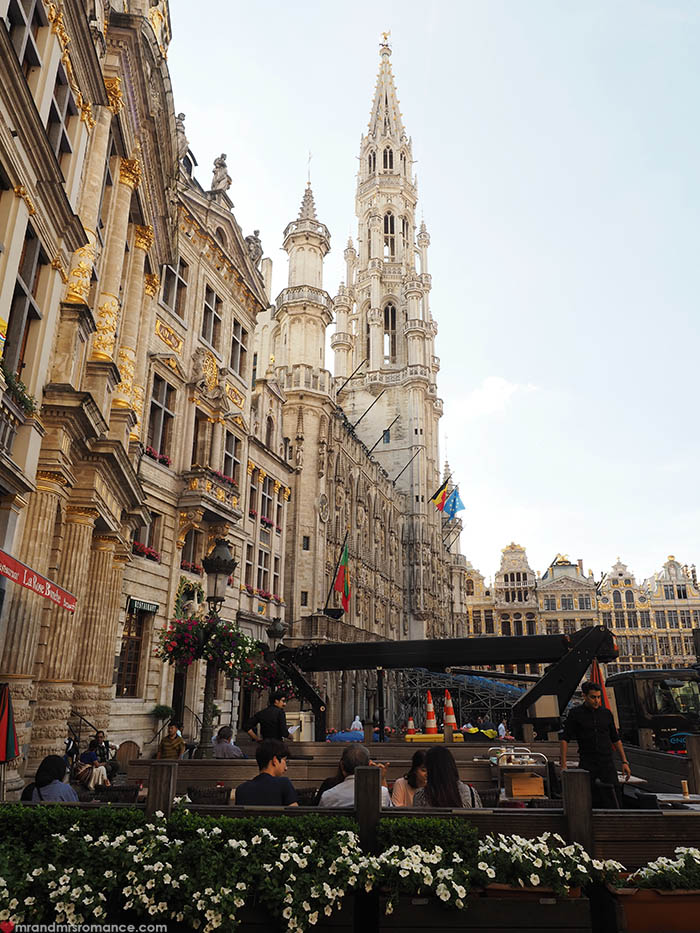 Today the Grand Place is looking as beautiful as ever, though there are some changes occurring. The whole square is being transformed into a giant medieval amphitheatre to celebrate Ommegang – a performance of folk law, entertainment and magic that takes the audience back to 1549 and the arrival of Charles V.

The Grand Place has this on the square and in a nearby park they have a medieval village with costumes from the time, food and drink from the 16th Century and things like jousting tournaments.

It should be a lot of fun – though we’re leaving before the party really gets started. 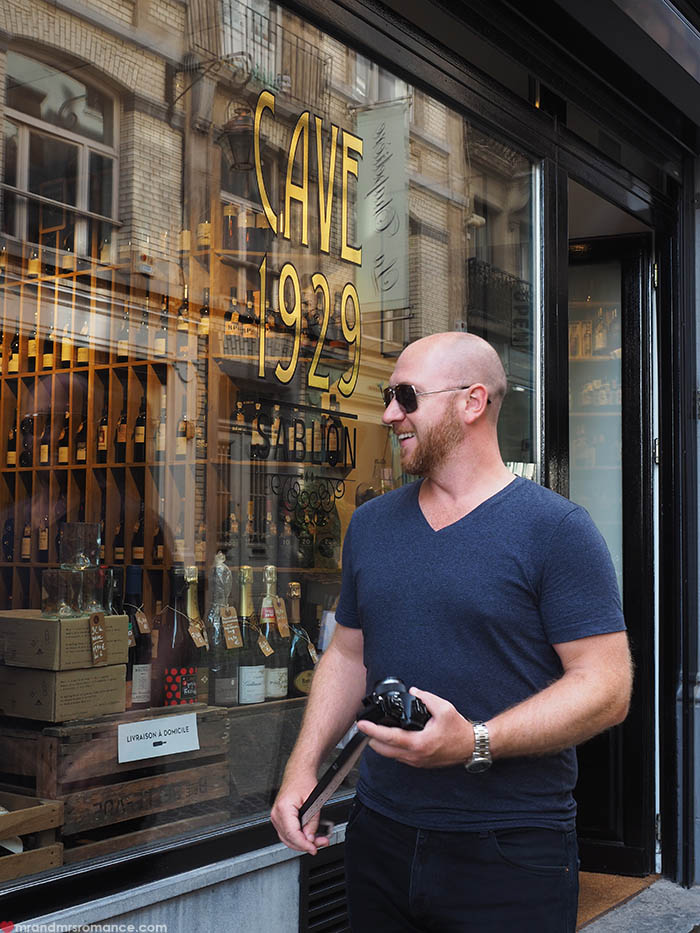 Walking around the streets of Brussels is fascinating. The chocolate, beer and wine shops they have here would be overwhelming if they weren’t so tantalising. You could spend a lot of time and money in a town like this! We’ve managed to find one of the few rooftop bars in Brussels. Play Label really sums up a lot of the Belgian attitude to having fun. It’s not just a rooftop bar – that would be too easy. It also has three levels of 10 pin bowling alleys inside. So if the beer gets too warm in the sun or the winter’s too cold, you can pop inside and have a roll.

The views down onto the little streets in this area of town are lovely plus there are some pretty good people-watching opps too. 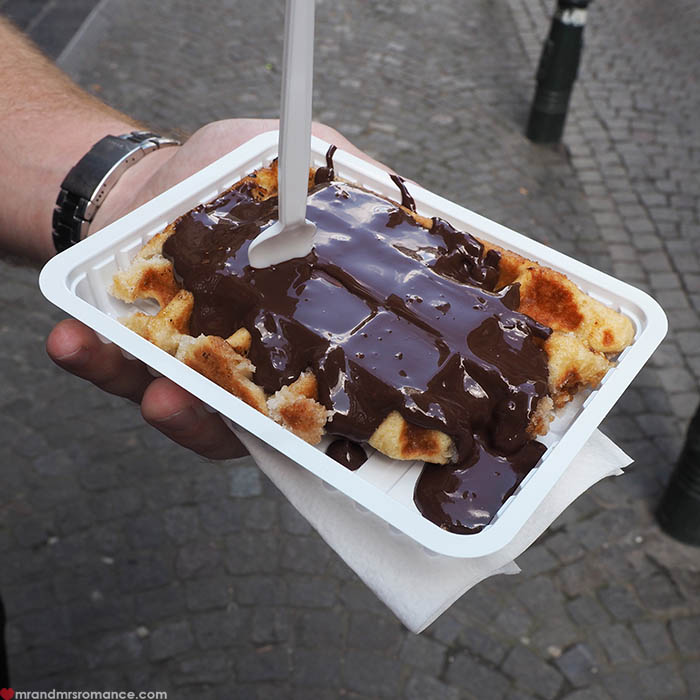 Of course there’s always time for more waffles. There are shops selling waffles all over the city, but the ones a little way down the street from Manneken Pis (the statue of a little boy peeing – don’t ask) are pretty good. A plain waffle will only cost you €1 and this one with rich Belgian chocolate is only €3.

Pro waffle tip: Don’t bother with all the really busy stalls offering waffles piled high with cream and junk. Look for shops that are relatively quiet and that are making the waffles fresh to order. Go for traditional chocolate topping too. Delicious. 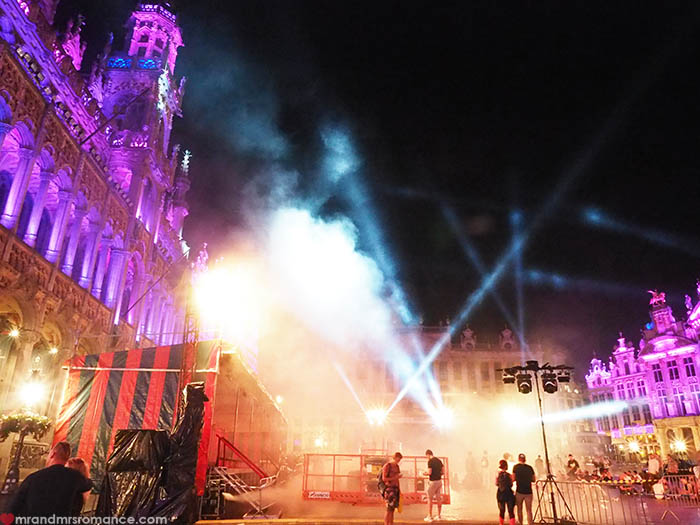 This is one of my favourite photos Mrs Romance has taken on this trip so far. Things are really çoming together with the Ommegang preparations on Grand Place. Tonight they’re testing out the lighting and smoke machines.

I love the people coming out of the smoke, the bright colours and the way the spot likes are beaming into the sky. It’s a shame we’re not sticking around to see what happens… but our friends in the Netherlands are waiting for us and Rotterdam is beckoning.

We hope you’ve enjoyed this week’s IG Edition. Next week we’ll have Dutch tales to share with you!

Which red wine? Our guide to 10 red wine varietals

Which red wine? Not only difficult to say, but also hard to decide, choosing a bottle of red wine to drink often a dilemma….