San Francisco streetcars – the little trams that run up and down SF’s famous hilled streets – are an icon of the city. But the perma-queue that spells out serious wait times has always put us off. Here’s how to avoid the lines and get the real feel of a trolley ride around San Francisco. 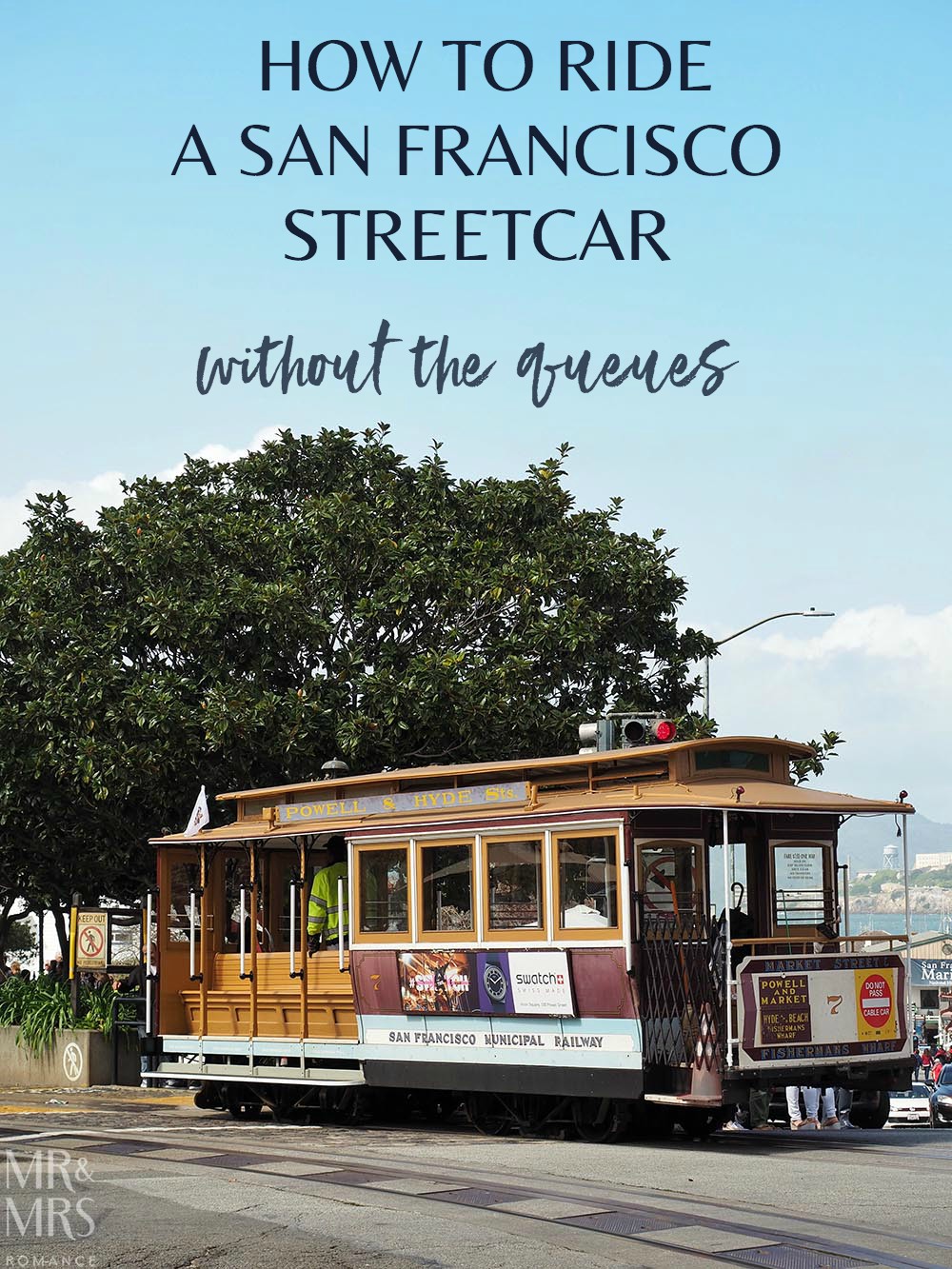 Swarming and jostling, the crowd pushes and heaves as it waits collectively to buy its tickets on the corner of Hyde and Beach Streets. It’s where everyone comes to get their cable car tickets so they can hang off the side of one of San Francisco’s iconic trolleys as it clambers up the city’s steep hills.

The problem is there are 2 queues.

The first one only gets you the ticket. The second line, which seems to last even longer, is where you wait until your car is ready.

If ever there were limbo on earth, it’s here. Caught in the perfect tourism trifecta of the Ghirardelli building, the Buena Vista Café and Fisherman’s Wharf, this square where the cable cars turn and start their journey full of visitors is where you come to spend your holiday in a line.

But not for us.

Thankfully – mercifully – we’re with locals. And boy, do they know this city. Of course, we pop into Ghirardelli’s to check out the chocolates. We stop in at the Buena Vista for an historic Irish coffee (or two!) and we promise ourselves a cob clam chowder lunch at Fisherman’s Wharf later too, but one look at the line for a cable car ticket is just too much for our San Franciscan friends. 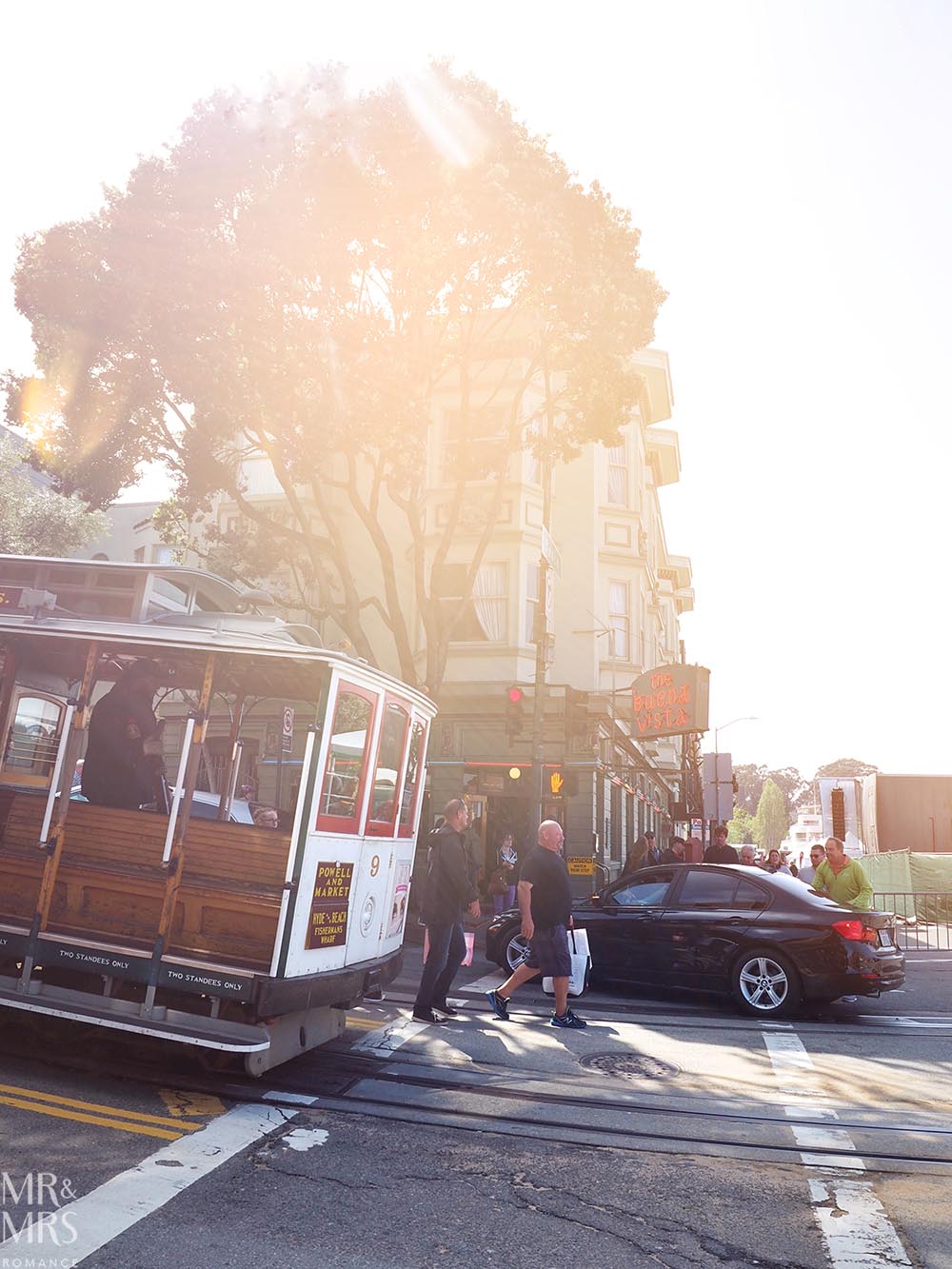 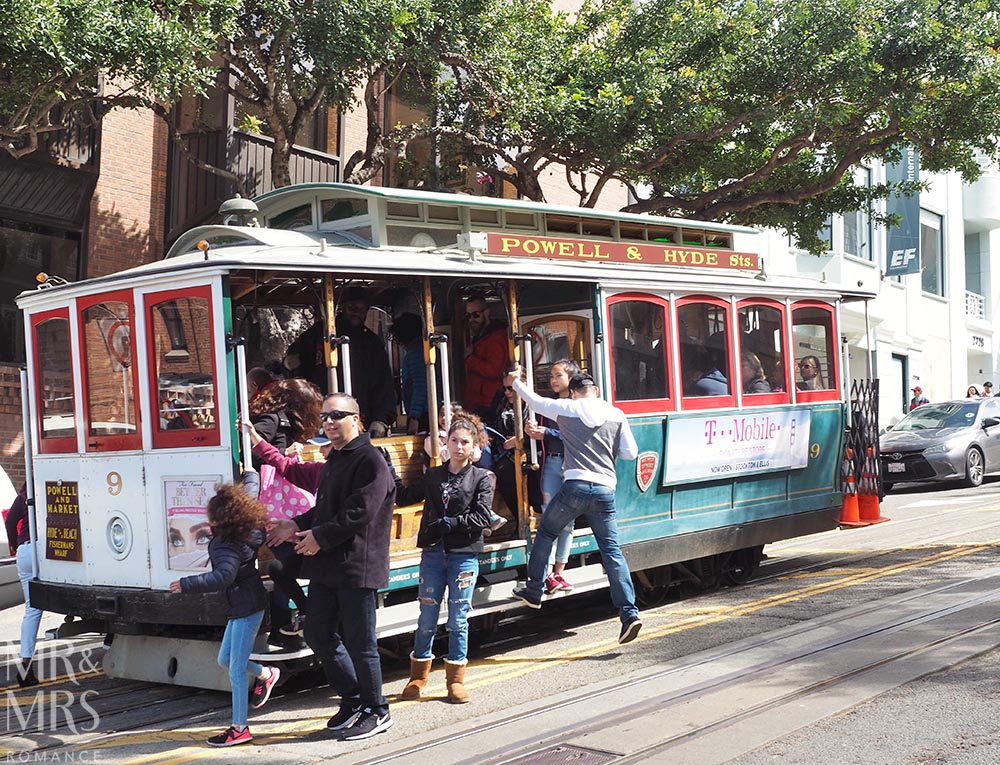 The secret San Francisco cable car line that has it all

They whisk us away through the quiet streets of San Francisco’s downtown Financial District (it’s the weekend) all the way to California Street towards the Ferry Building. Soon enough a cable car comes rumbling toward us.

And you know what?

It’s empty! We hop on the back – just like you see in the films and talk to the conductor as the tram pulls away. 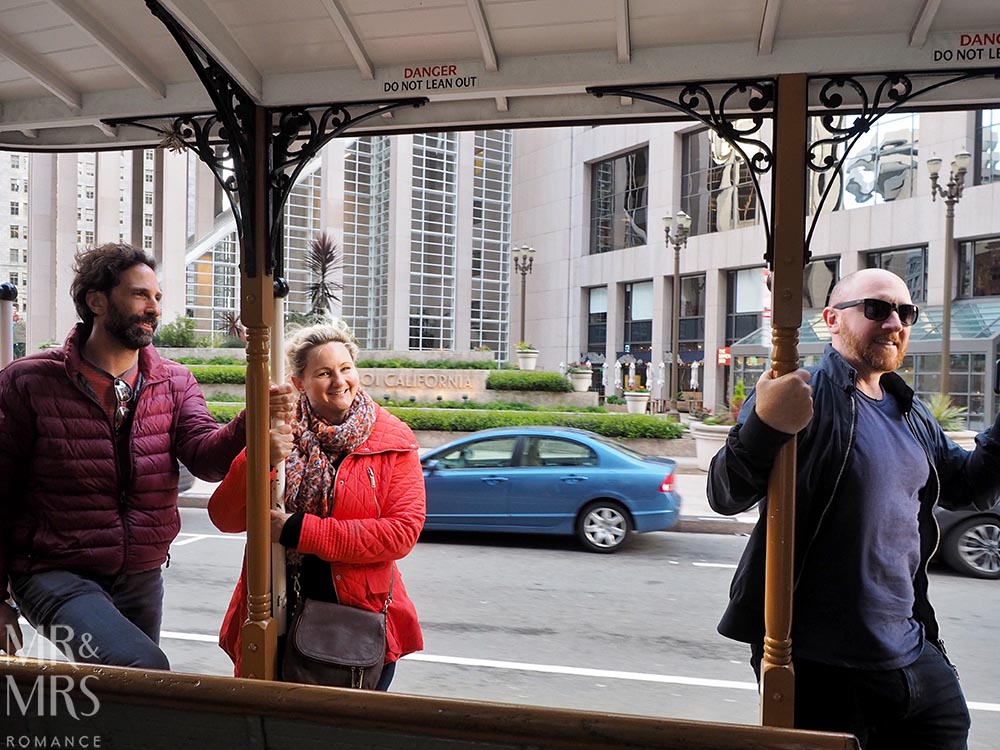 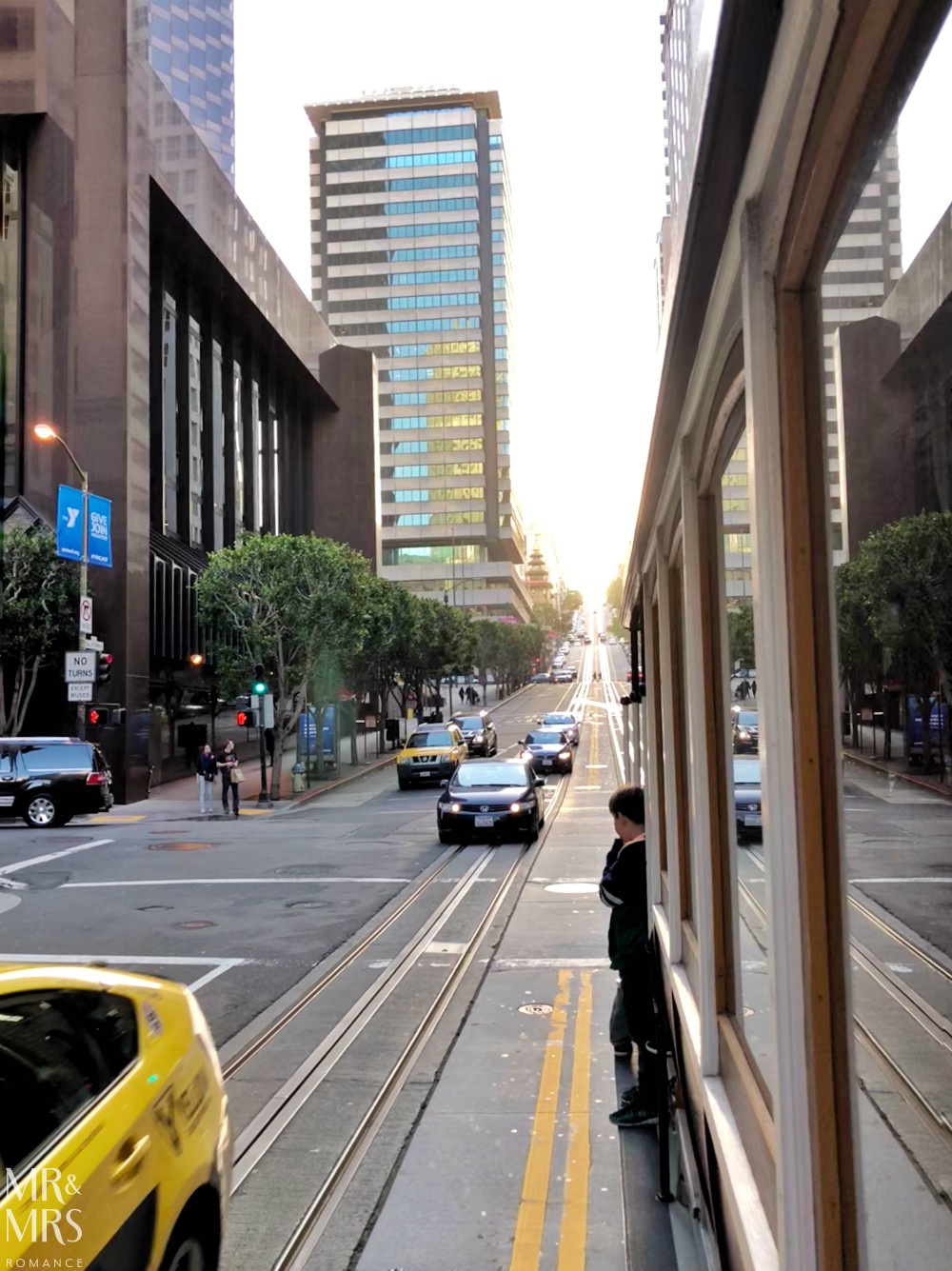 You can buy tickets on board, but you have to pay cash. The cool thing is if you’re ok with standing, your ticket will be cheaper. That’s because the California Line is more of a local line than for tourists.

Commuters use the California Line to get to and from work, and they prefer to sit.

Where does the California Line go?

Running east to west across the city parallel with Broadway, the California Line starts from Drum Street where California Street begins. It runs 18 blocks all the way to Polk Gulch district at Van Ness Avenue.

You can find info on schedules and ticket prices here on the Muni site. 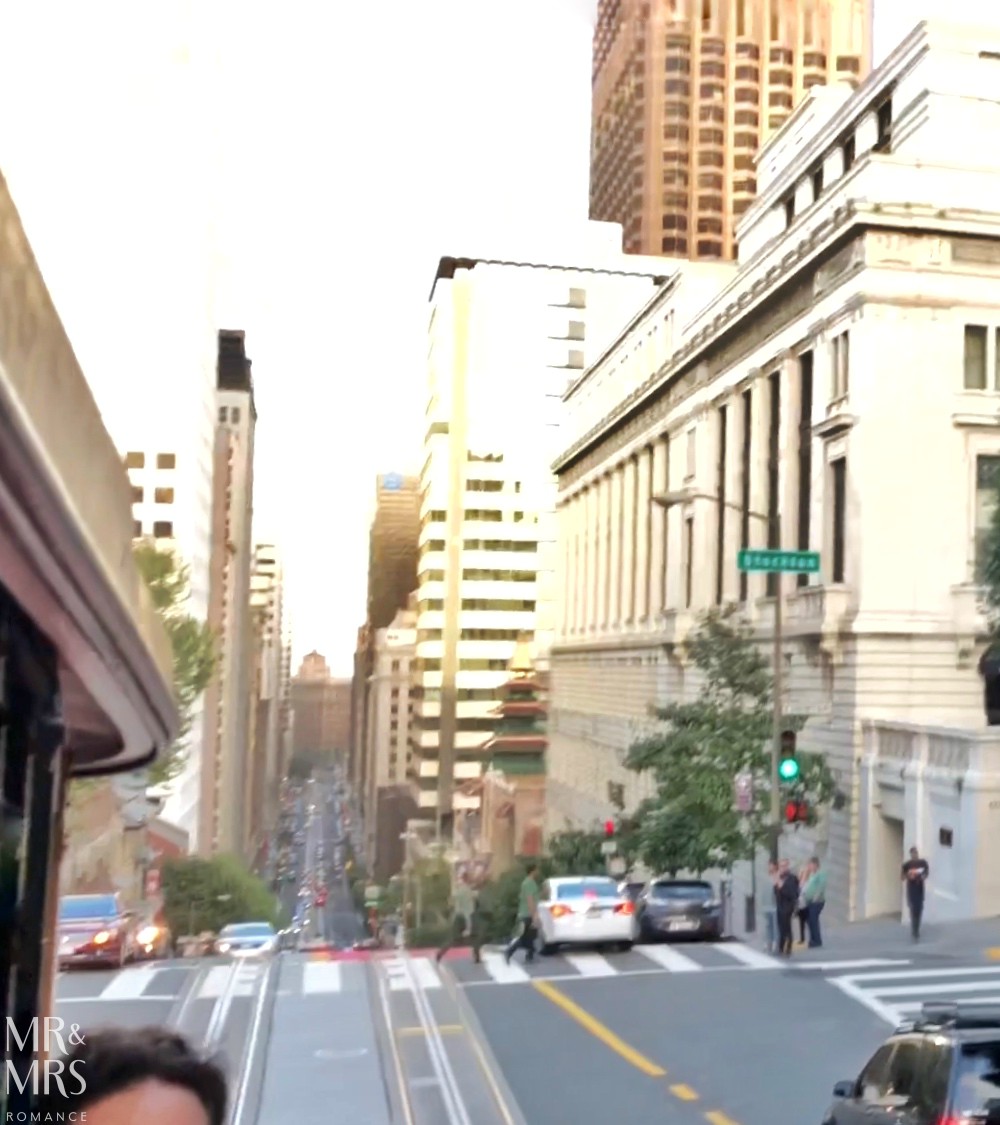 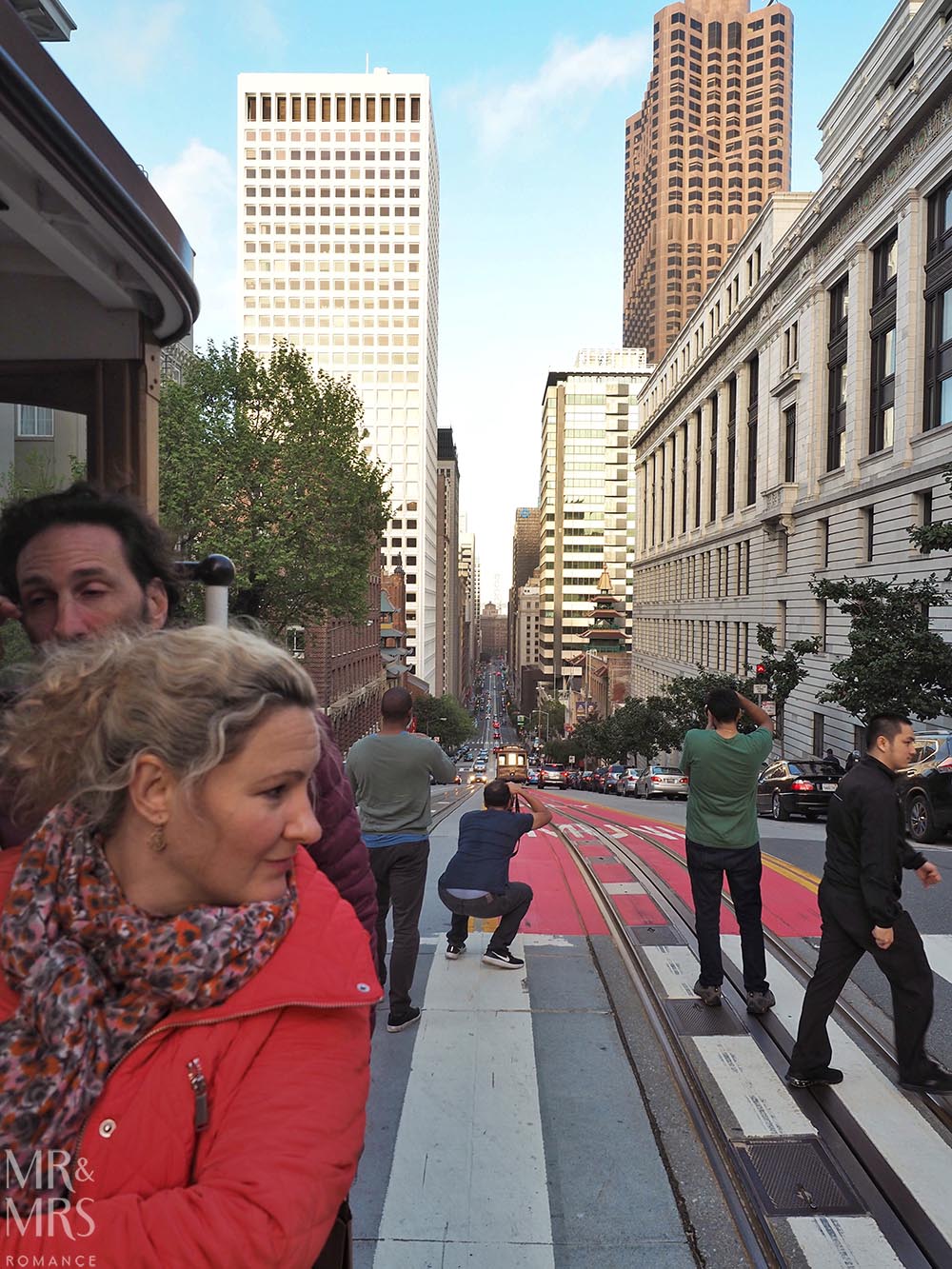 It’s a great ride up and down those typically steep-then-flat hilled streets of The City. Hanging from the poles of the streetcar, leaning out over the road and looking out down California, you get glimpses of the bay. It’s amazing you’re still allowed to do this, as cars and trucks run past quite close and they don’t slow down.

It’s exhilarating and a lot more fun than I thought it’d be.

You can even watch the driver crunch the complicated looking gears of the tram then lean on the pole that works the brake as you trundle through busy intersections, feeling very much part of this fascinating city. 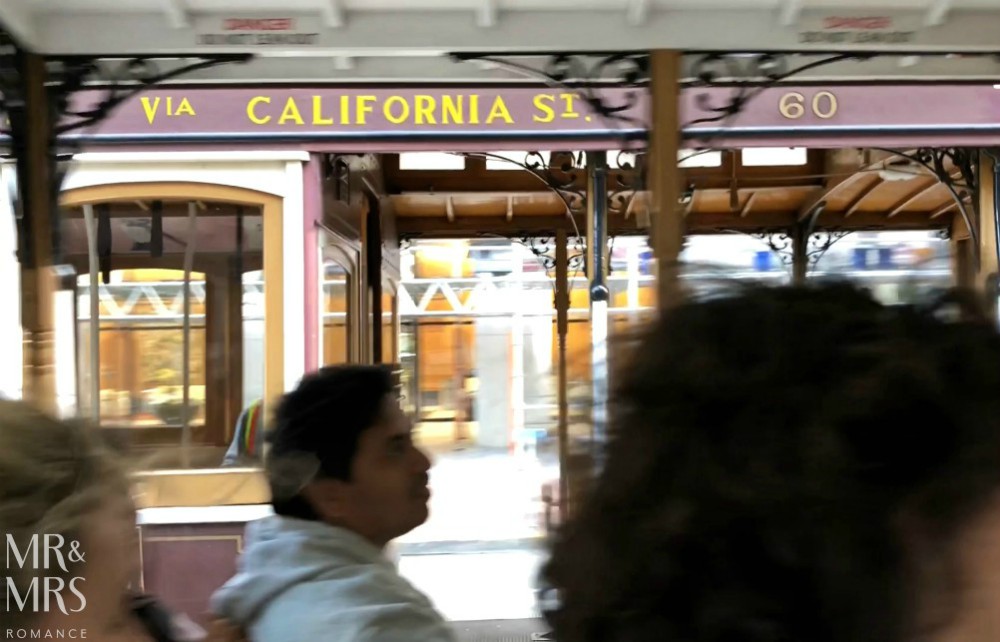 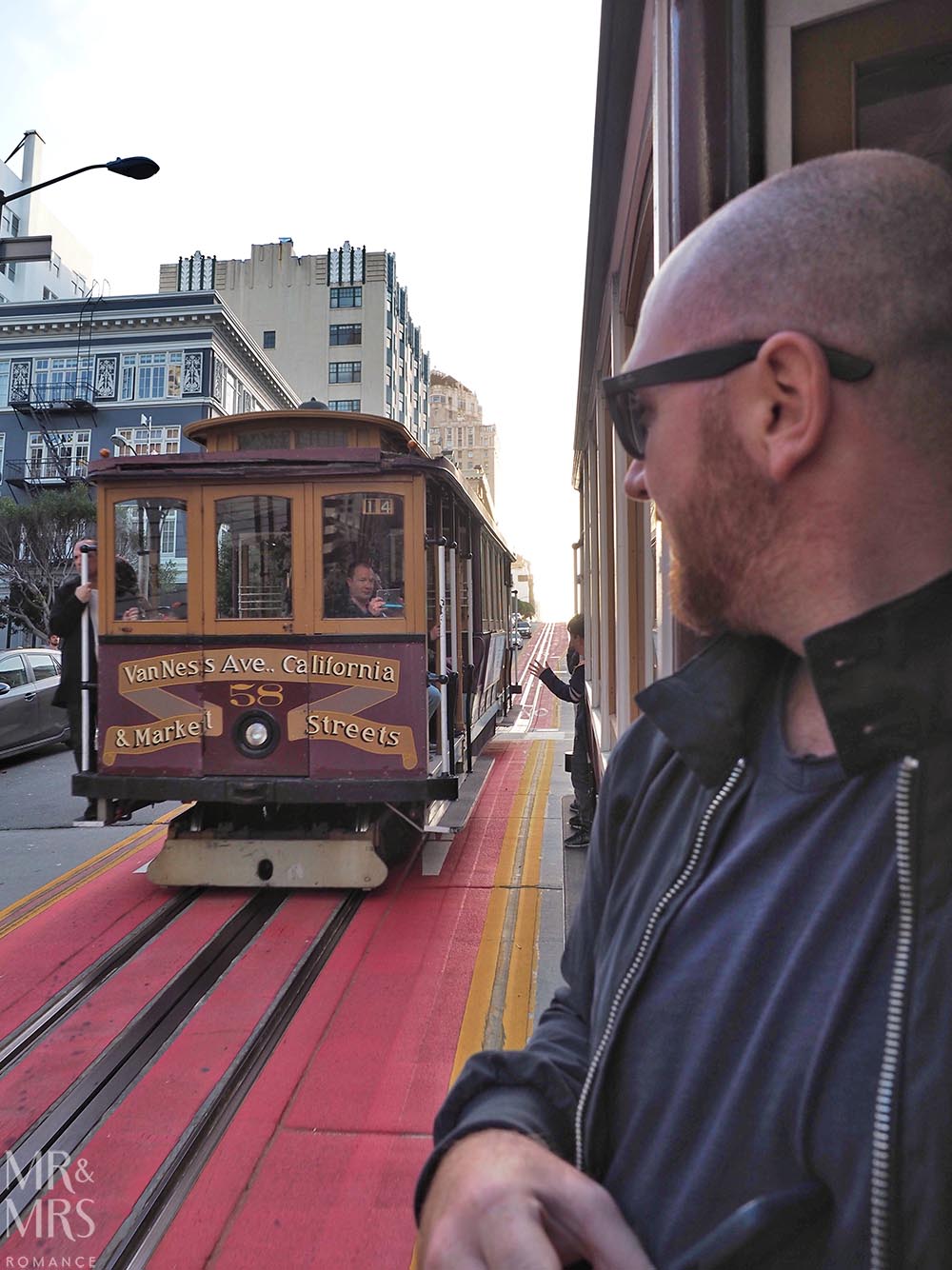 What can you do at the end of your ride on the California Line?

Polk Gulch isn’t really the nicest area of San Francisco and when the sun goes down, we’ve heard it’s not a great place to be. However, there are perks to this area. For a start, House of Prime Rib just up the road on Van Ness worth a visit if you like your meat and cocktails.

We hopped off just before the end of the line and strolled around Polk Street until we found Shanghai Kelly’s – a fun sports/dive bar worth popping in for a quick drink and soaking up a very local vibe.

A bit back from Polk Gulch, however, is Nob Hill and then Chinatown, which are worth checking out.

Otherwise you can just call an Uber and go pretty much anywhere you want! 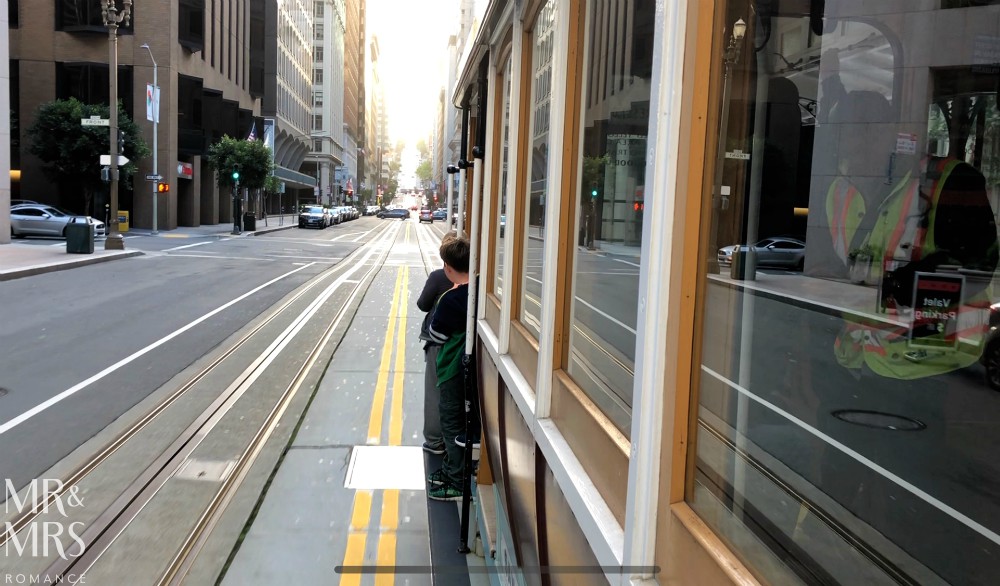 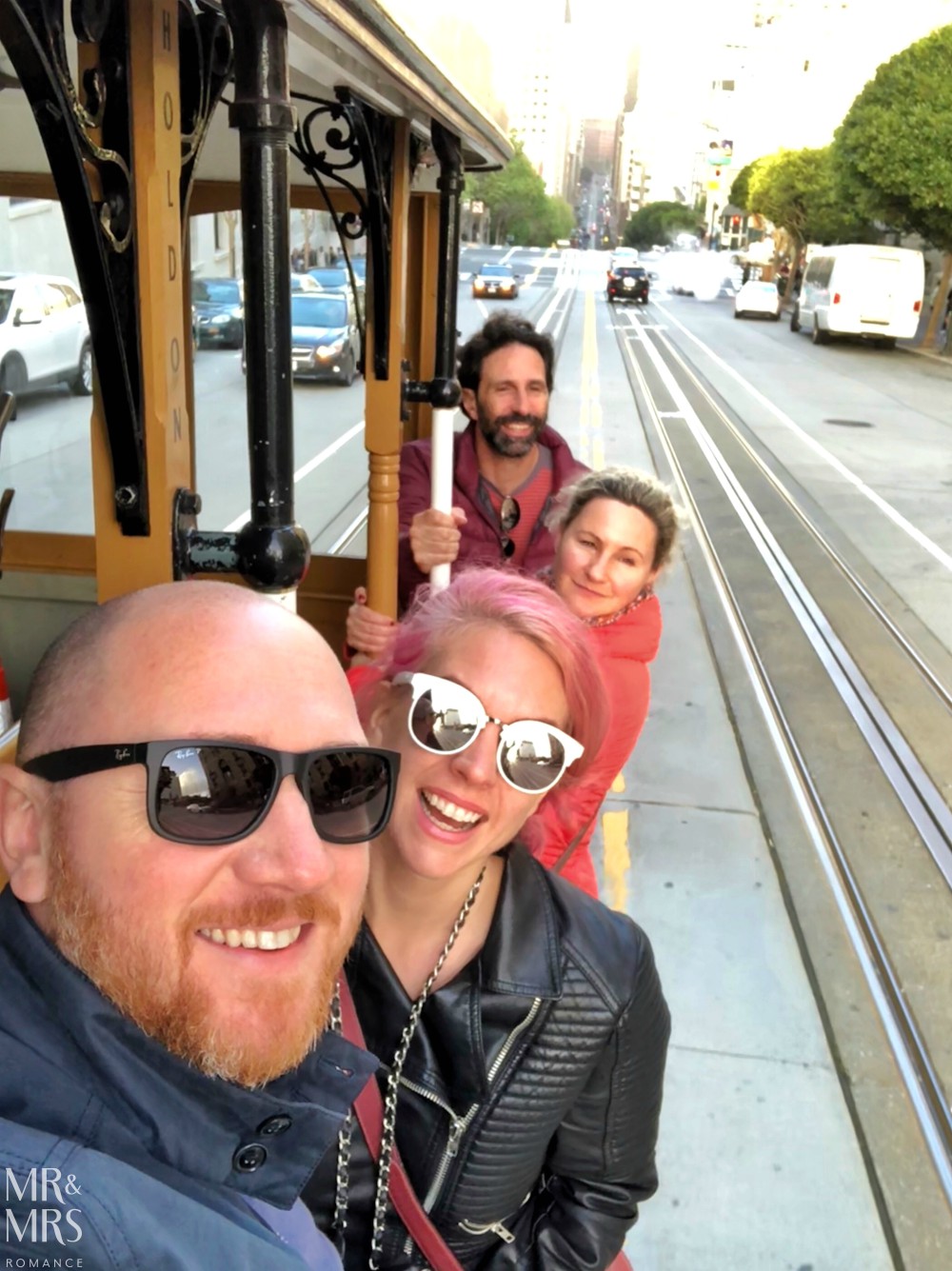 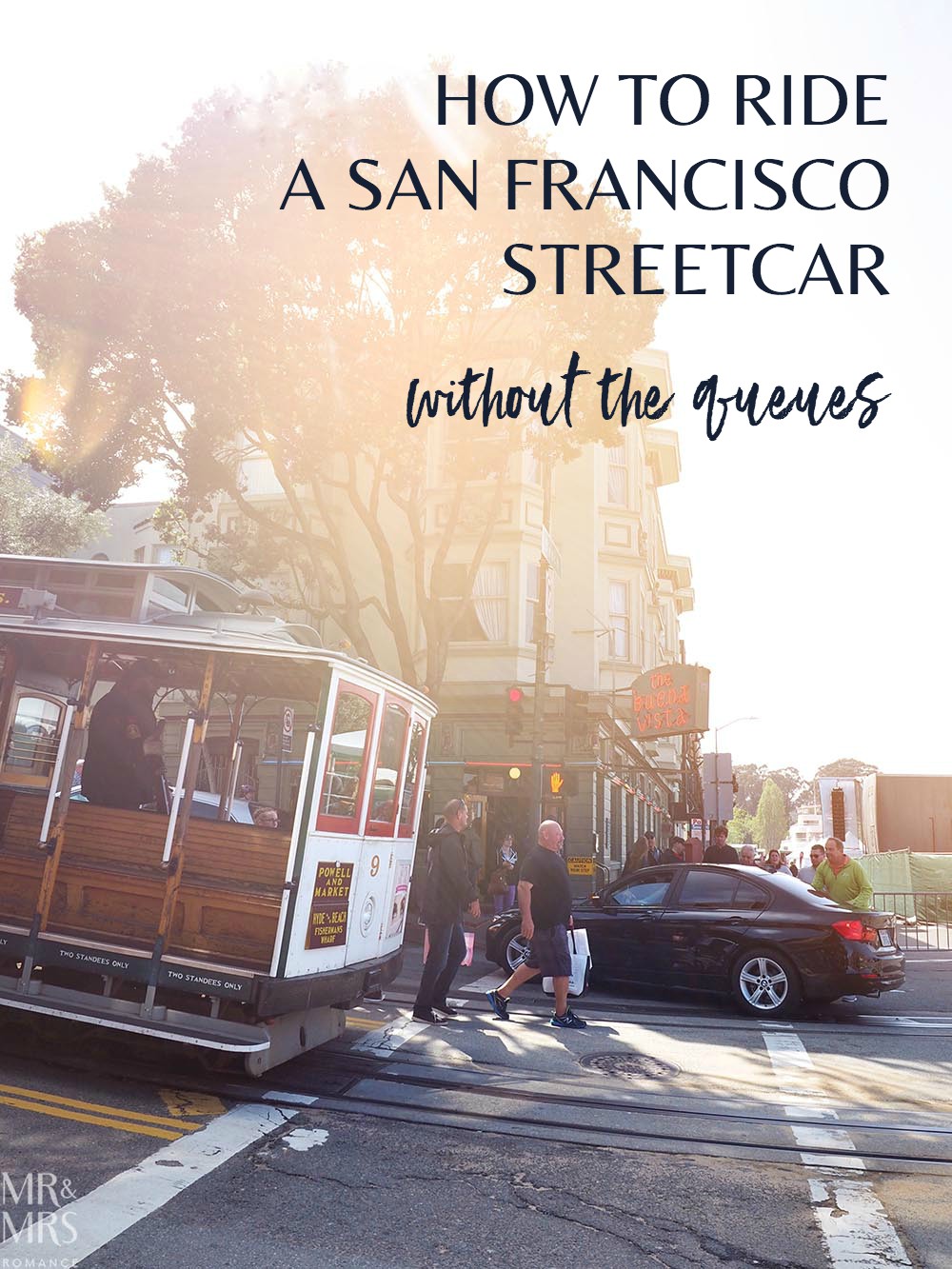 If you’re looking for other things to do in San Francisco, you’ll love these stories:

When the sun shines in San Francisco

When the rain falls in San Francisco

Our library of other stories on The City

Have you ever ridden the San Francisco streetcars? What’s your favourite tip for The Golden City? Tell us in the comments below.