Crispy with a soft tender middle, puffy yet robust and packed with flavour – here’s a simple pizza dough recipe that you can make at home but will take you back to evening strolls through the romantic streets of Napoli. 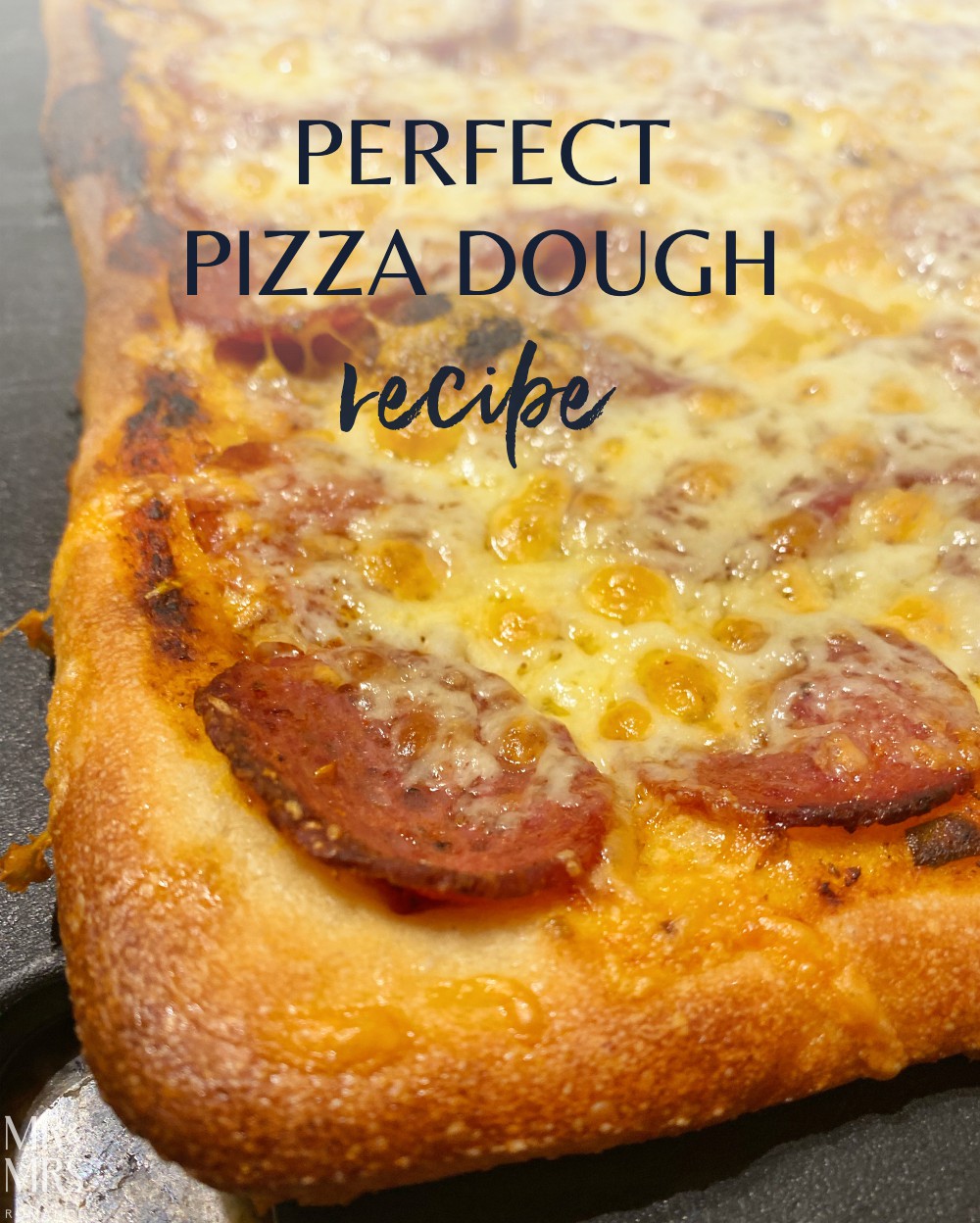 We owe a lot to the magnificent Italian city of Naples – not least for the invention of the pizza. The southern city’s humble flatbread topped with tomato and mozzarella (basta cosí!) now comes in a huge variety of forms from every corner of the globe.

Much like the American hotdog, which has outgrown its history and its homeland’s concept, the humble pizza is a truly international creature.

And this has happened quite quickly.

Christina’s father, who was from Trieste in northeastern Italy, had never heard of ‘pizza’ when he left for Australia as a young man. It was still only something the southerners enjoyed.

Of course, pizza isn’t the only thing you should eat when you’re in Naples, but it should definitely be a headliner. 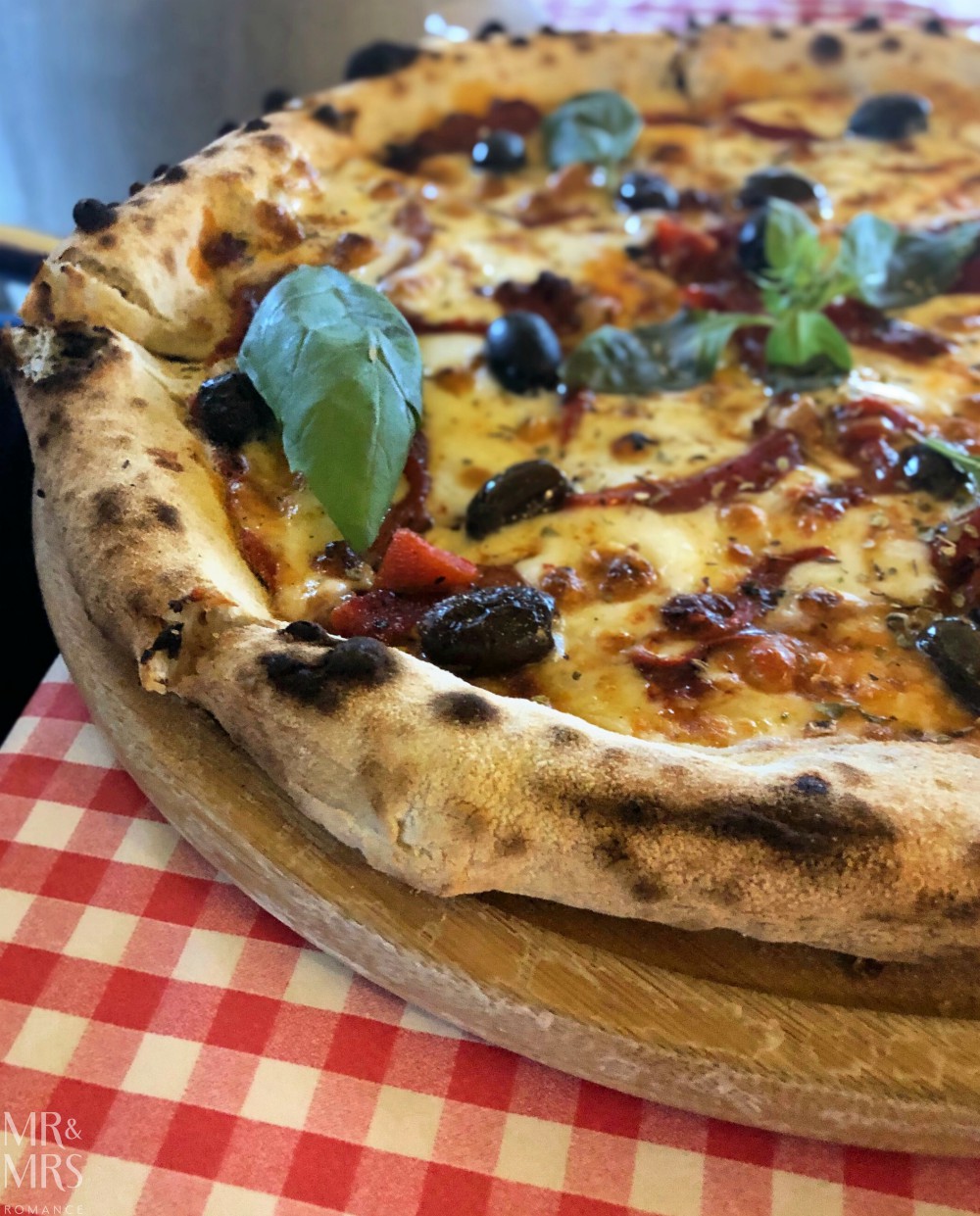 And as pizza spread through Italy and across the globe, the original Napoli style changed so much some don’t even resemble pizzas anymore.

So while Neapolitans look down their noses at the popular and ubiquitous thin and crispy version from Rome, I have a feeling those same noses are quite out of joint at other more ‘avant-guard’ formats.

Pizza pockets, pizza flavoured crisps, pizza muffins must be a bone of contention for them… and never mention pineapple to someone from Naples!

So making pizza at home is quite a responsibility.

But there are a few problems with making pizza dough at home. For one, your home oven will never get to the scorching 400ºC that professional pizza ovens can. And even the clay pizza stones you can buy don’t help that much.

But this recipe from a real Neapolitan pizza chef works a treat and delivers the best pizza results I’ve had at home.

How to make pizza dough at home

This recipe is quite different to any I’ve seen. You mix the flour into the water and yeast, not the other way round and you only kneed in the bowl.

You also bake this pizza on a metal baking tray. So much easier than preheating a stone.

This makes enough dough for 3 medium pizzas or 2 large pizzas. 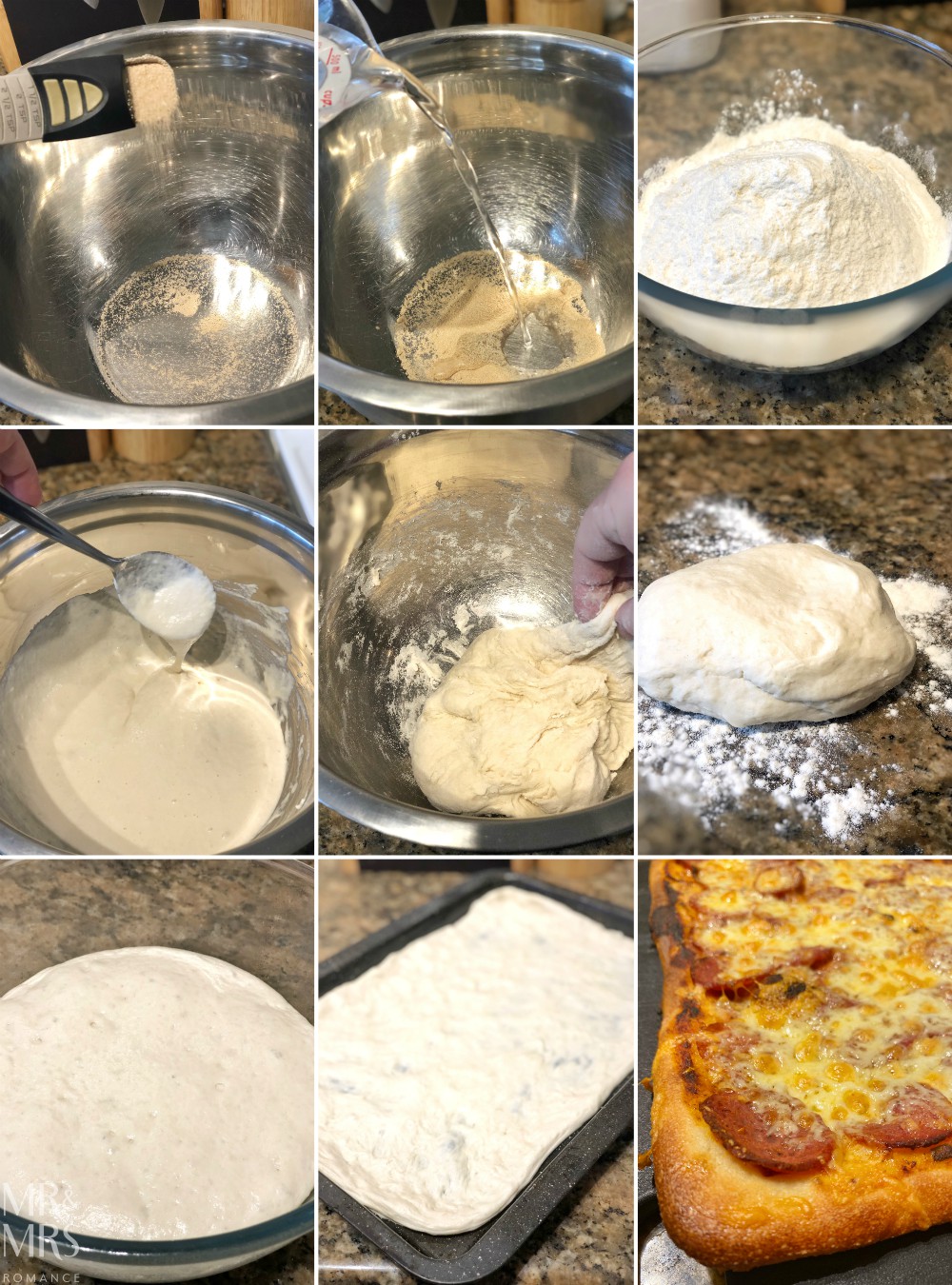 – 450g flour – ideally 00 but regular plain flour will work. Check for 10-12g of protein in the nutritional information section

1. Dissolve yeast in the cold water, then mix ¾ of the flour in the water with a large metal spoon. Mix the flour in until you have a smooth creamy consistency.

2. Mix the salt in with the remaining ¼ flour, then gradually add the flour/salt mix to the bowl. Continue to mix everything until everything is combined.

3. In the bowl, kneed the dough energetically with one hand, turning and pressing the dough until it’s smooth and has no lumps – about five minutes. Moving quickly with your knuckles and fingertips so the dough doesn’t stick to your hands too much. Then leave it to rest for 10-15 minutes.

4. Cut the dough into either 2 or 3 pieces,* shape and fold the dough on a floured surface, then put it in a lightly oiled bowl, cover and leave at room temperature for around 7 hours.

5. Gently extract the dough from the bowl and stretch it out onto your favourite baking tray or pizza tray. We use a baking tray so our pizzas come out oblong!

6. The dough should be very stretchy and pliant, so keep it thin – no more than 3mm deep in the middle. The outer crust can be thicker. Cover with cling film and leave to rest for another couple of hours.

7. Add your pizza sauce and bake the pizza base in a 250ºC oven for about 5 minutes.

8. Take the pizza out, add sliced onion and put it back in the oven for another 5 minutes or until the onions start to cook/char.

9. Take the pizza out again, add the rest of your toppings – meats, veggies (no pineapple though!) and cheese, then return to the oven for another 3-4 minutes or until the cheese is melted.

*It’s at this point that you can put the dough into a sealable container and put it in the freezer instead of letting it proof.

When you want, you can pop the frozen dough out of the pot into a covered bowl then let it defrost and proof for about 5 hours. 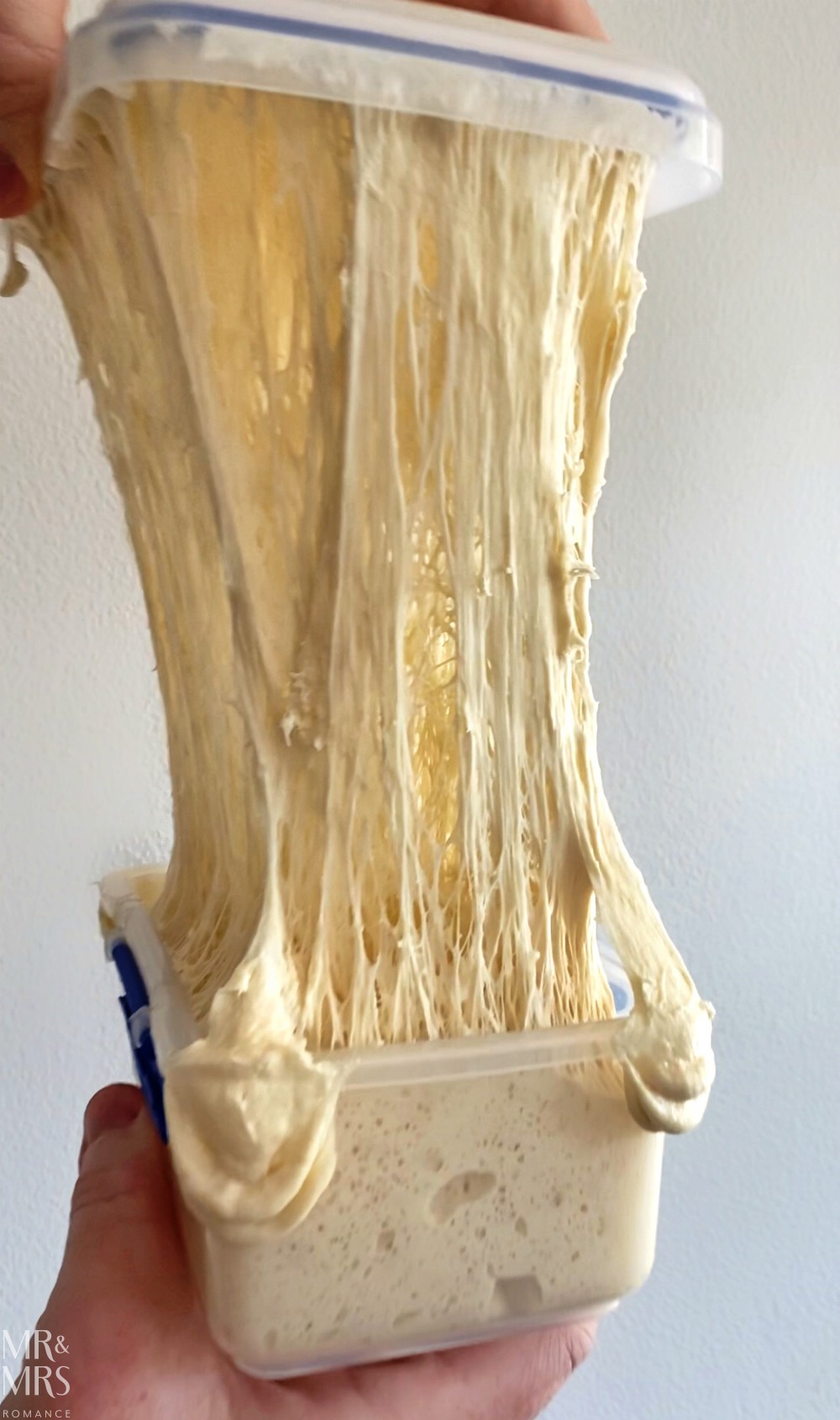 We’ve left our dough in the fridge before and this is what happened! It’s good to see such beautifully developed gluten structure, but it makes shaping the pizza quite difficult.

I’ve tried a few other different recipes but none have worked as well as this one.

The recipe I was using before this was from taste.com, but it includes olive oil and sugar – two things traditional pizzerias never use. Plus the recipe says to roll the dough rather than stretch it with your hands – another Naples no-no.

At the end of the day, we’re all cooking this for fun, not for awards, so it’s important you use a recipe that you like and that works for you.

I hope this one helps. Buon apetito! 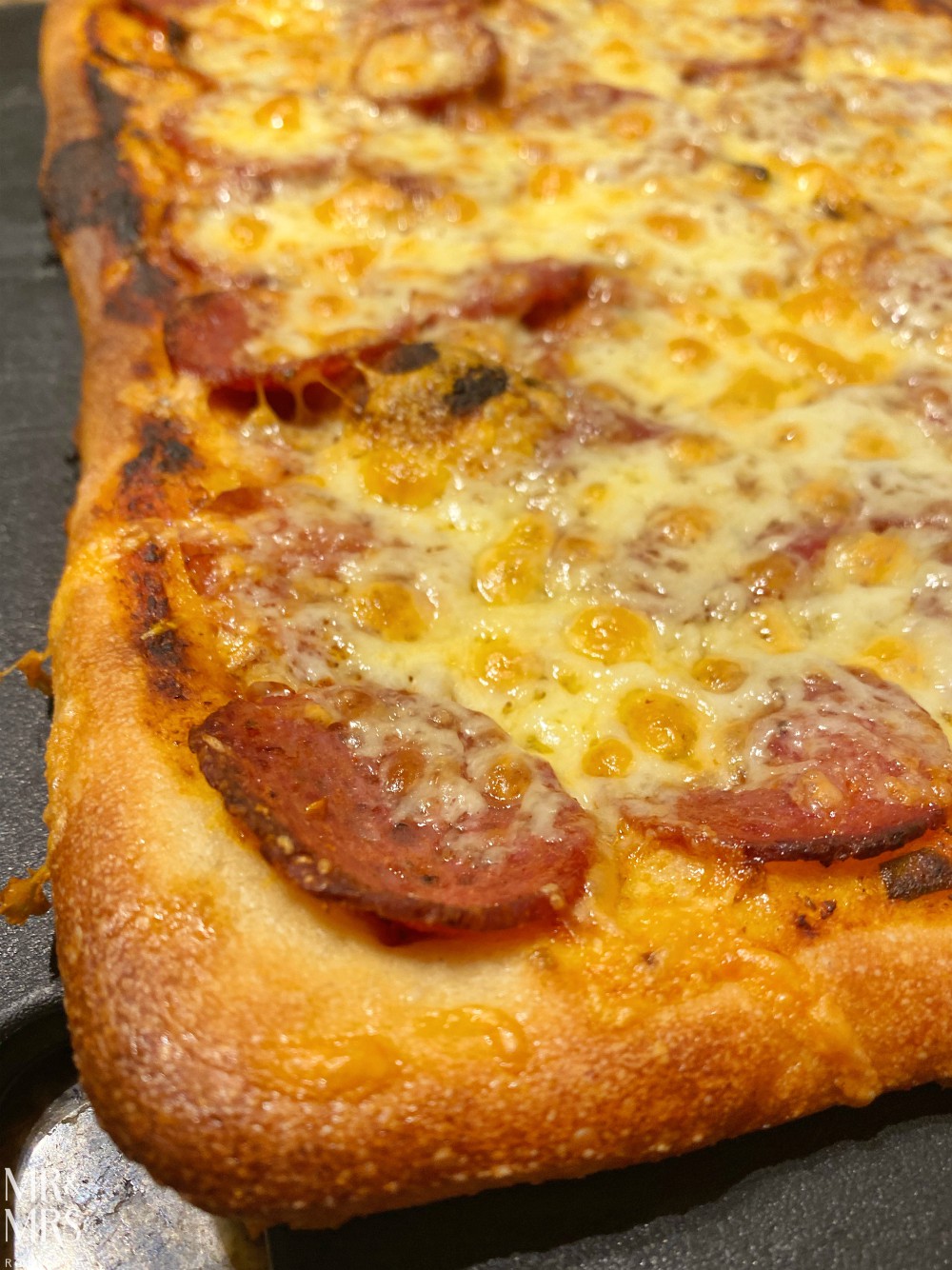 We’re off to Milan Fashion Week today! We’ll be in Europe for the next month for work and a little play. I’m looking forward…