The American Dream stands for liberty, equality of opportunity and a prosperous life born of honest hard work. But where can we find a more tangible form of this ultimate American ideal? Something simpler. Something tastier. Something we can sink our teeth into. 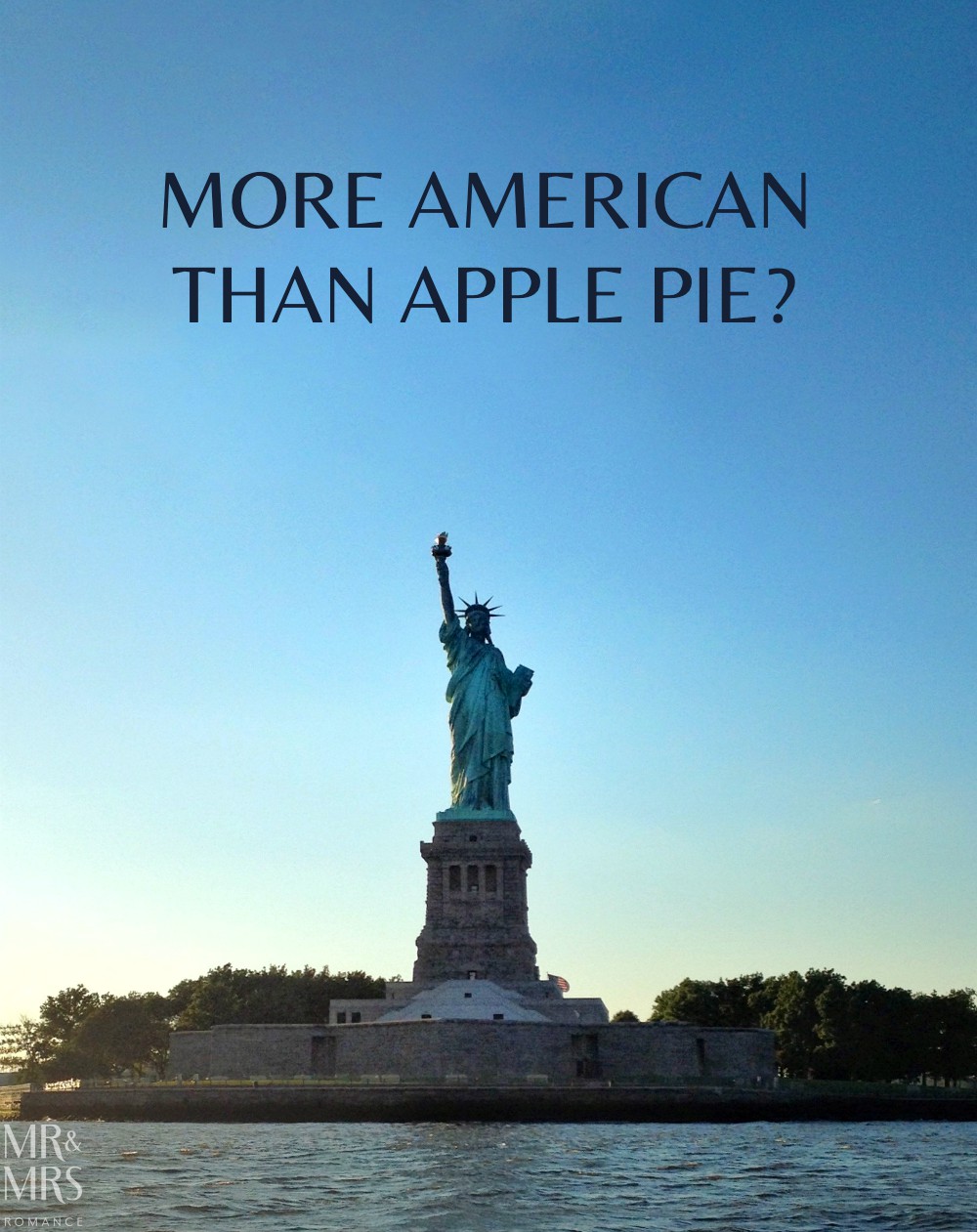 With its foundations in the American Constitution and the Declaration of Independence, and coined by eminent author and historian James Truslow Adams, the American Dream is a high-minded ethos indeed.

But what is the reality – the result of the American Dream? Is it really that propitious white picket fence? Or can we find this ideology on every street corner in every city in the country?

Perhaps the American Dream is as simple as a scarlet-skinned sausage tucked into a soft white bun smothered in bright yellow and red sauce.

The American Dream and the history of the hotdog

These days, hotdogs are ubiquitous – not only in America but all over the world, with many countries and cultures putting their take on this sausage snack. More about that later.

But in the USA, the hotdog moved west leaving a breadcrumb trail as it went. Here’s a look at the East Coast, Midwest and West Coast forms of this all-American icon.

Could this be the best apple pie in America?

New York City – where it all began

in the summer of 1867, shortly after the American Civil War, German migrant Charles L Feltman opened his sausage stall on Coney Island and sold his ‘Coney Island red hots’ to the masses enjoying the sea breeze off the coast of Manhattan. 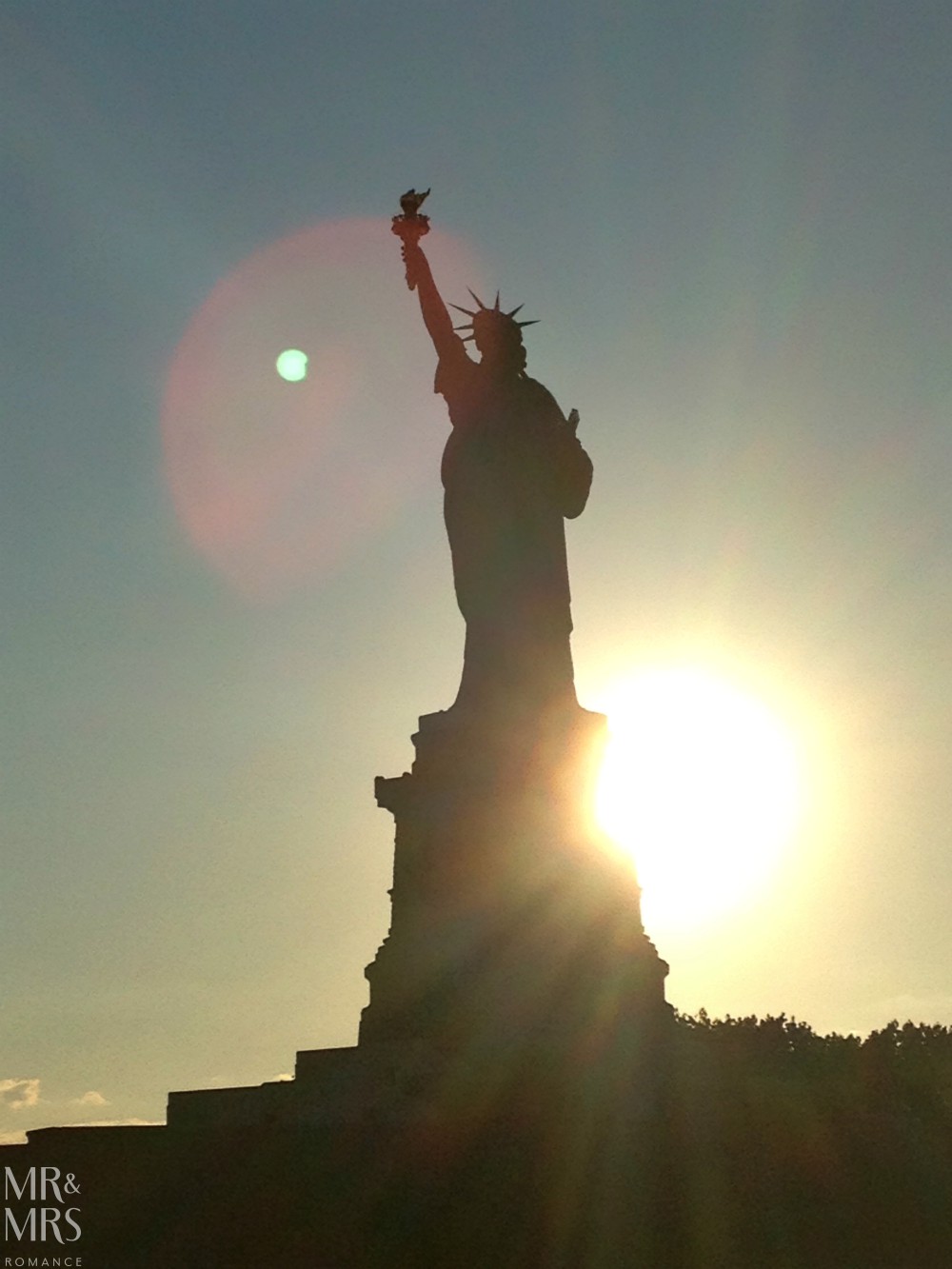 These were the first ‘hot dogs’ to grace America’s palate, and at its height, Feltman’s could dish up around 40,000 red hots a day!

The following years turned into something of a sausage war when an ex-employee – Nathan Handwerker – started ‘Nathan’s’ in direct competition, which eventually put Feltman’s out of business.

However, thanks to a recent resurrection of the Feltman’s original recipe, both brands are now back in business on Coney Island… and in supermarkets everywhere. 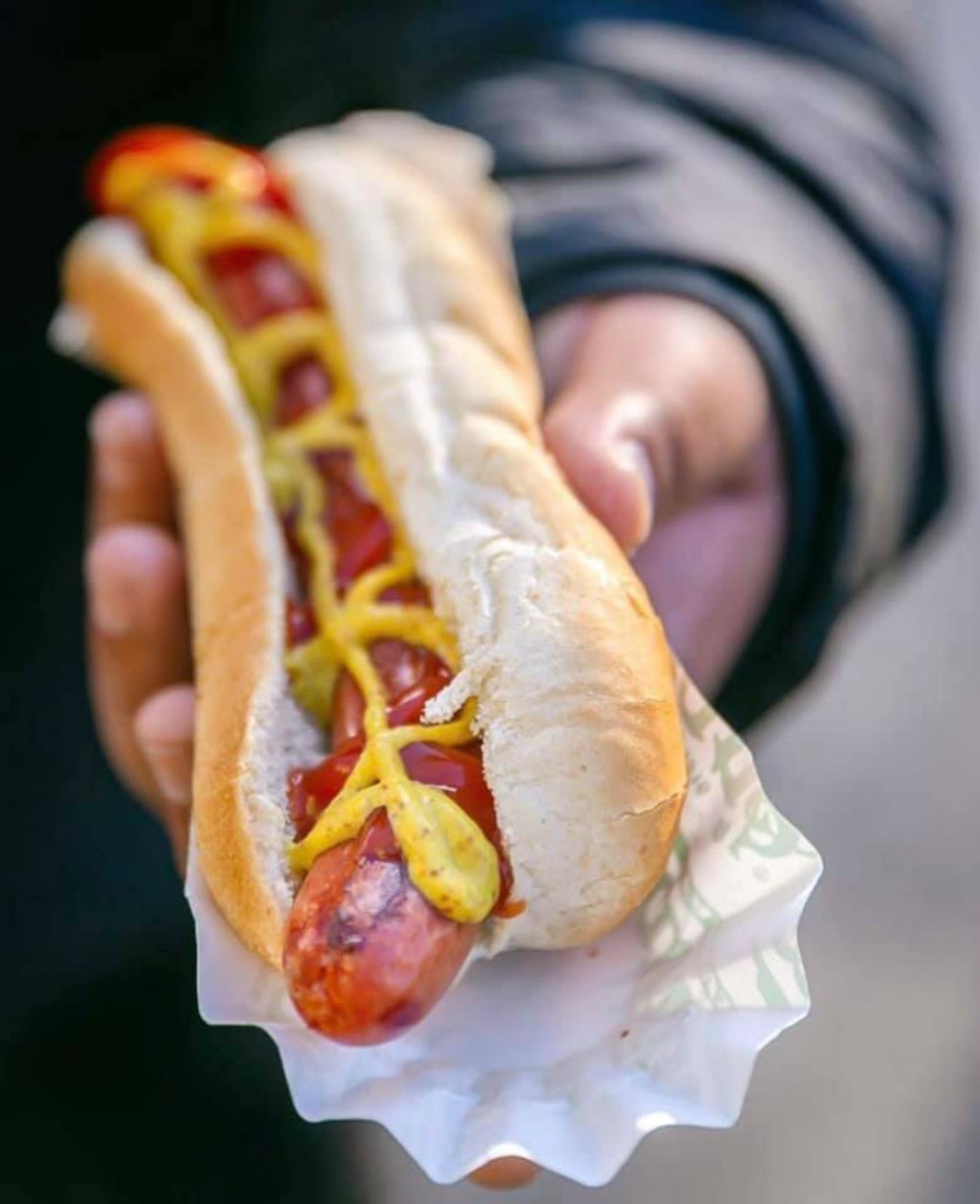 You can read the full fascinating story of Feltman’s here from a BBC story that’s part of their Cultural Roots series.

Check out our First-Timer’s Guide to NYC

Midwest style with the Chicago ‘dog

The Chicago-style hotdog is quite different to any other you’ll find in the States. Of course, there’s a thick-cut beef frankfurter sausage in a bun, but the bun is usually topped with poppy seeds.

Along with the sausage, you should have white onion, yellow mustard, a disturbingly bright green sweet relish, sliced tomato, tangy ‘sport pepper’ and a long wedge slice of pickle. It’s quite confronting, but there’s no doubt how tasty it is. 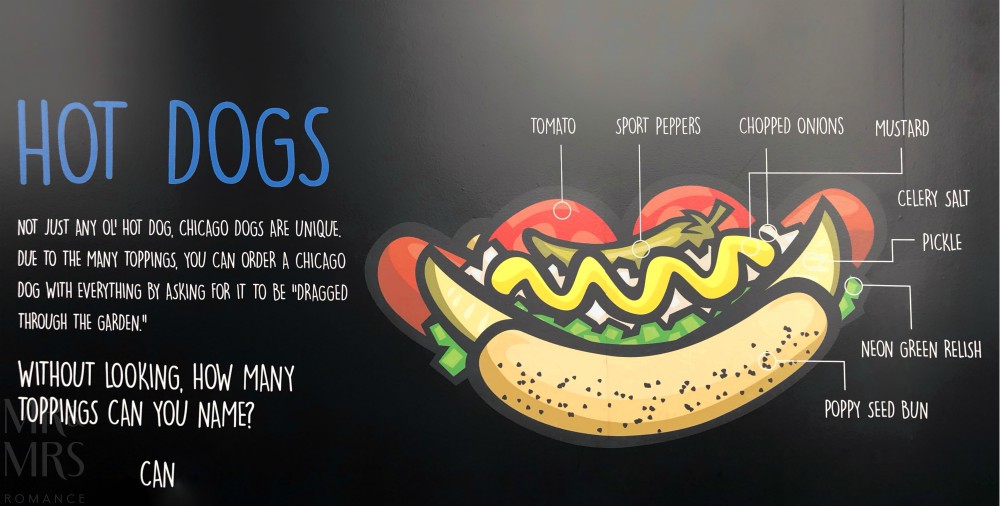 We found this excellent graphic at the top of the Willis Tower, Chicago

Portillo’s – a Chicagoland institution – has been serving sausage like this for over 80 years.

In 1939, while Feltman’s and Nathan’s were in the midst of their ‘battle of the bangers’, ex-Marine Dick Portillo started a hotdog truck he called ‘The Dog House’ in Villa Park, IL.

Portillo moved his hotdog business back to his hometown Chicago in 1963. Now there are around 60 restaurants in the States, and they sell a huge range of food, not just hotdogs. 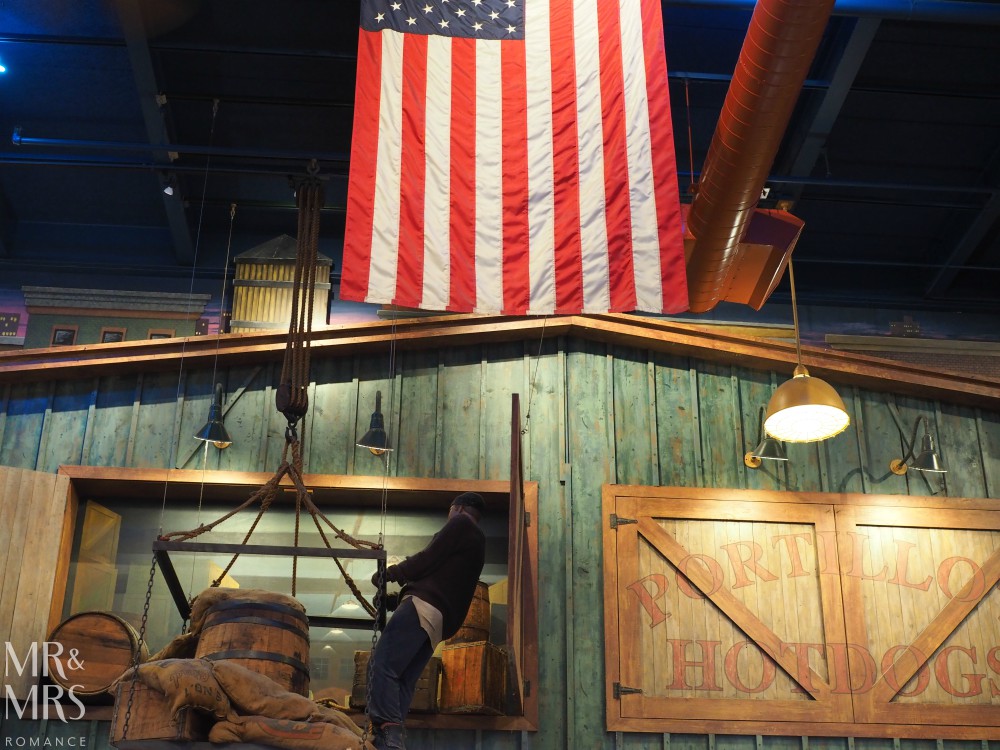 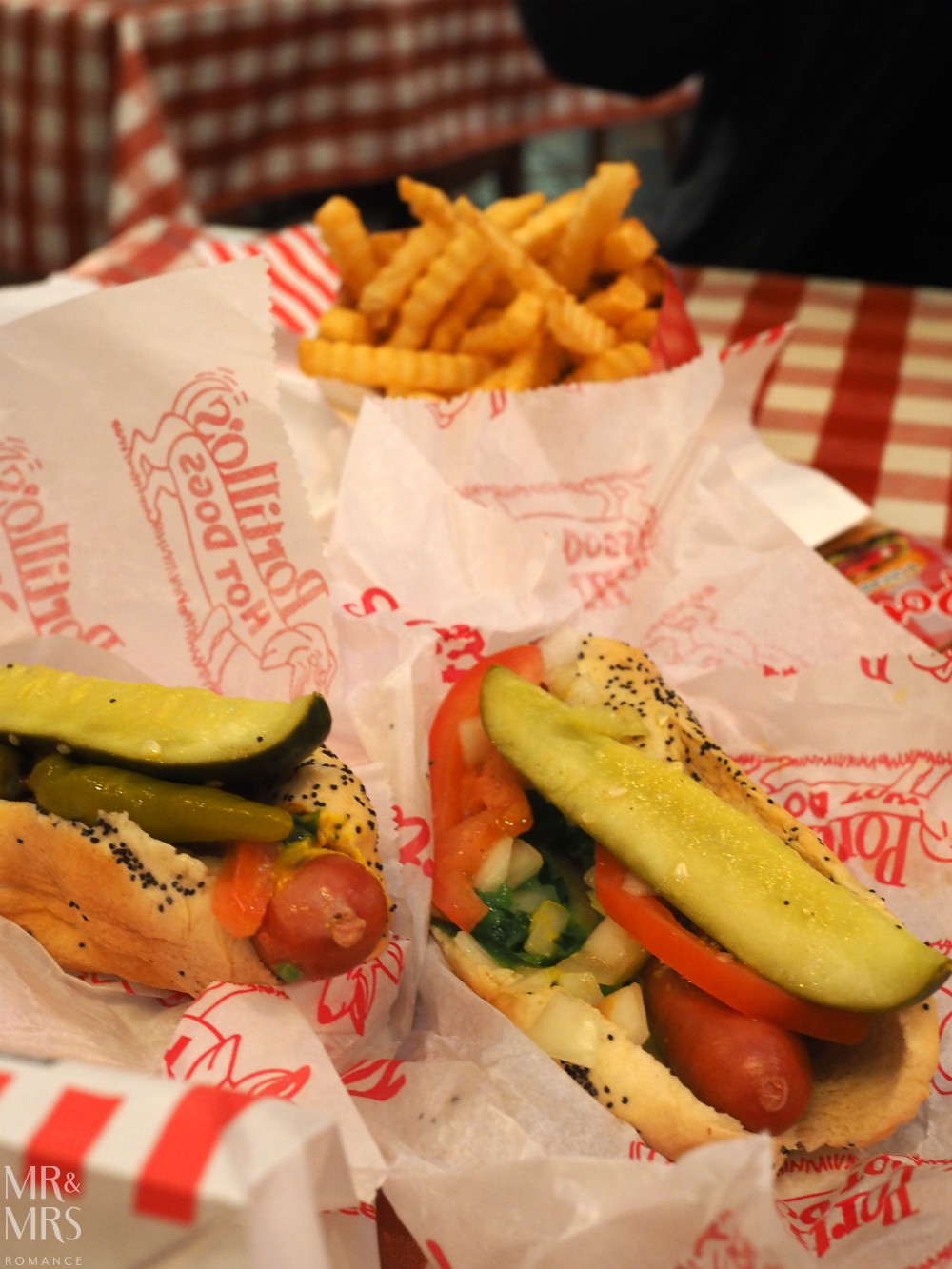 Check out our Essential Guide to Chicago

Only in LA – Pink’s celebrity hotdog

Around the same time that Dick Portillo opened his Dog House in Illinois, Mr Paul Pink was lifting the lid for the first time on his hotdog waggon in LA.

Over eight decades later, the wagon’s gone, but the shop Pink replaced it with in 1946 is still there. Selling over-size sausages smothered in the Pink’s proprietary spicy mince, everyone comes to Pink’s in Hollywood for a taste of their famous chili dogs. 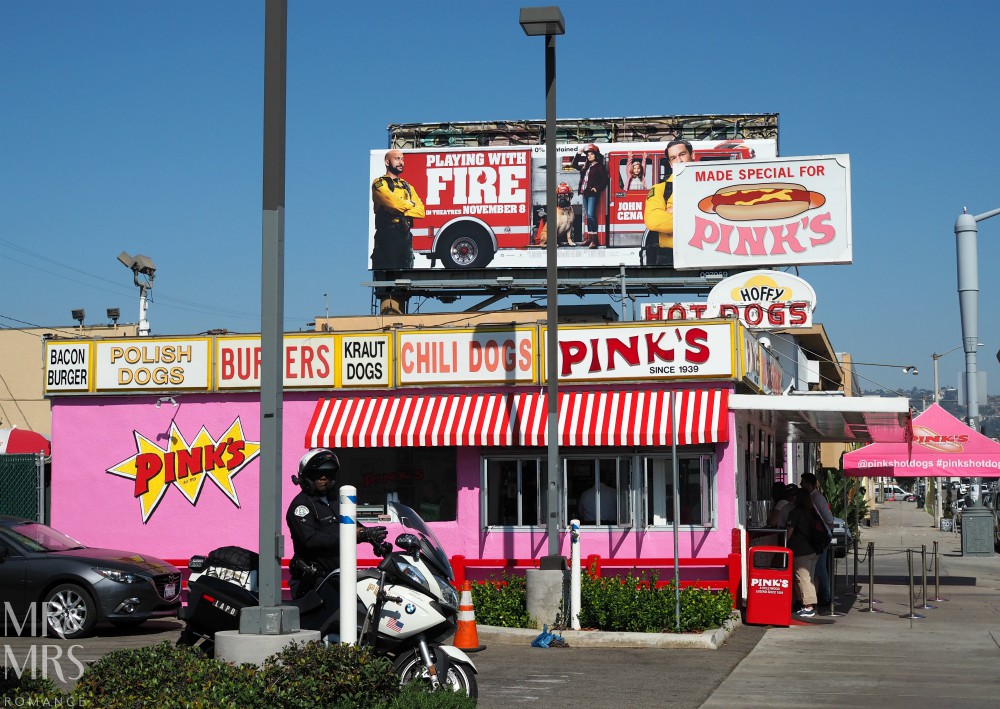 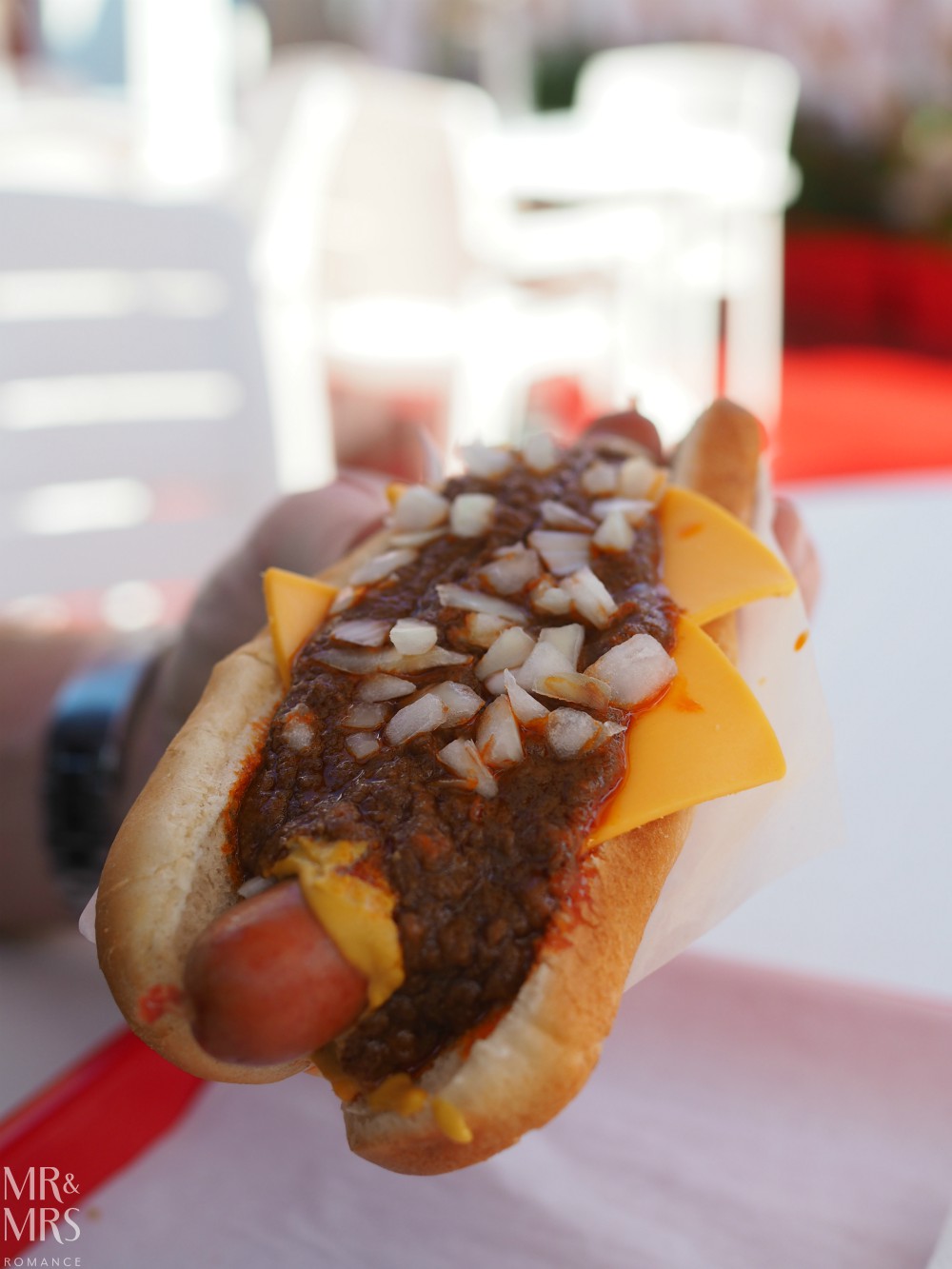 They also have a huge range of hotdogs and chili dogs at Pink’s – a range that’s ever-growing. New additions take the name of the celebrity who ordered them. The likes of the Rosie O’Donnell Long Island Dog 9” and the Ozzy Spicy Dog are in respective honour of the comedian and the singer.

Others are eponymous to various famed chefs and actors like Carl Reiner, Patt Morrison and Marlon Brando.

But in true LA style, these ‘dogs are huge and completely over the top. They’re also a must-eat while you’re in SoCal. 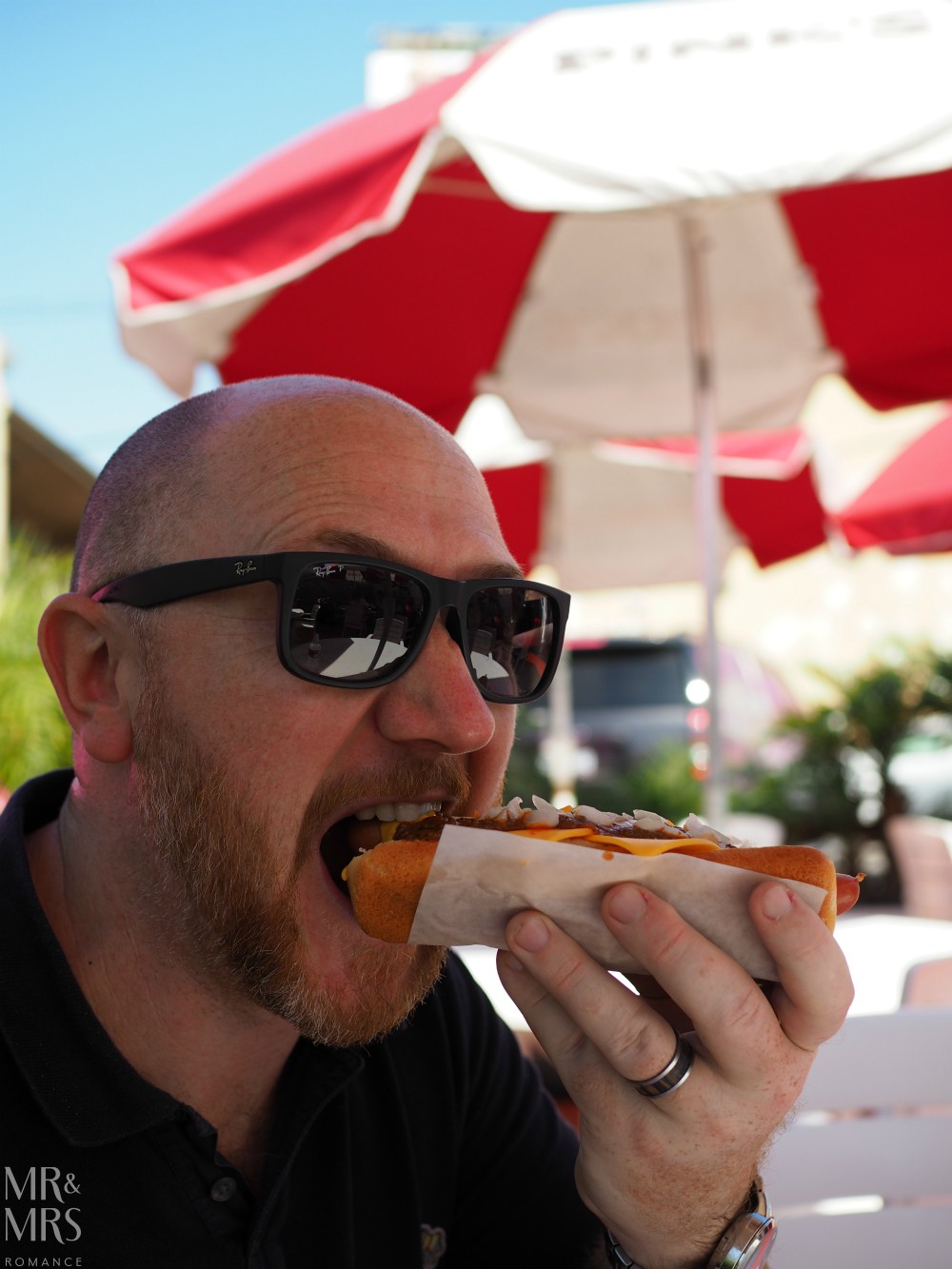 10 recurring food dreams of the USA

Hotdogs have captured not only the American imagination but that of the whole world. Pretty much every US state has its own variation, and many countries have their own take on the humble ‘dog too.

In Australia, we don’t have the hotdog. I mean, we can buy them here, but they’re not a cultural watermark for us.

Instead, we have the sausage sizzle.

This strange societal symbol might not have the historic lineage of Feltman’s or Portillo’s or Pink’s, but my goodness it’s an icon of Australia’s own version of the American Dream: Mateship. 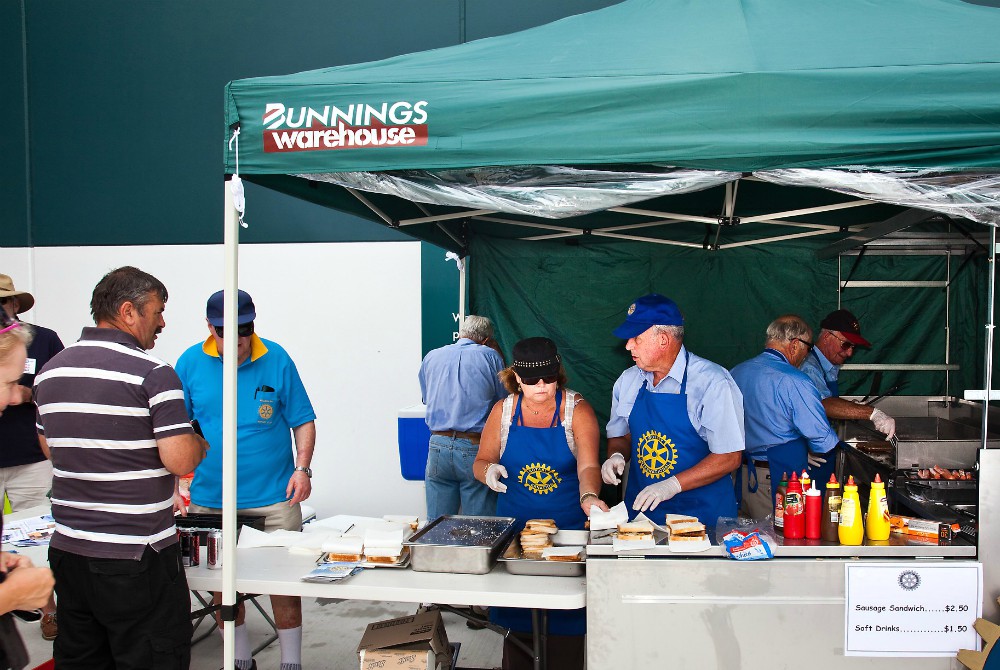 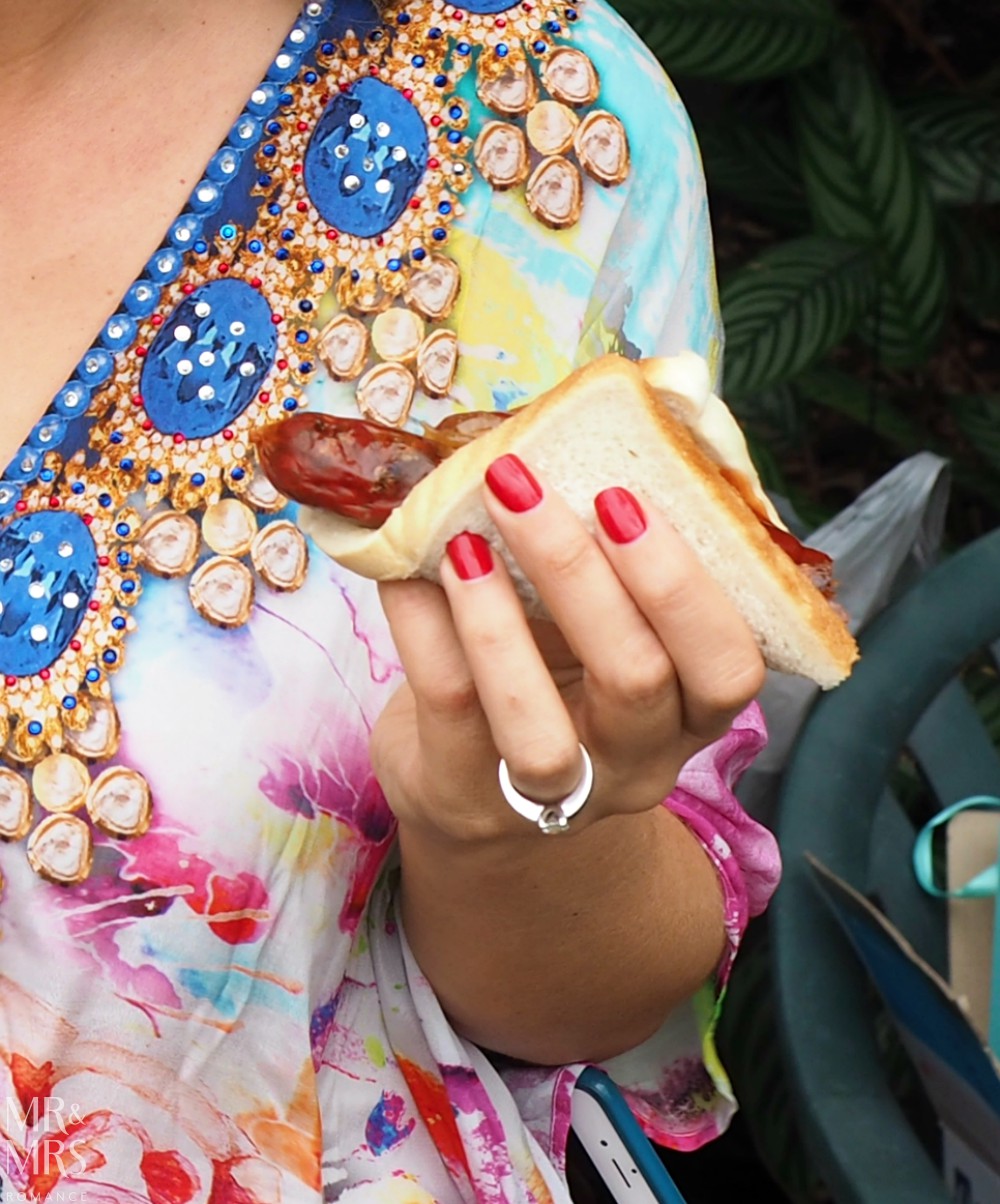 At its simple best, a sausage sizzle is a well-cooked née burnt snag on a bed of similarly grilled onions balanced on a single sheet of soft white sandwich bread. Sauces are applied deftly and discretely by the end-user.

But a sausage sizzle is all about the snag and onions. The bread is merely a vehicle, or as comedian Ivan Aristeguieta puts it:

“The bread is just a serviette you can eat.”

For a full very amusing dissection of this true national entity, check out this ABC podcast on the ‘unauthorised history of the sausage sizzle’.

From backyards to Bunnings to the entrance to polling stations (yes, Prime Ministers are elected on the basis on how they eat theirs), the Democracy Sausage is very much part of our Aussie culture. 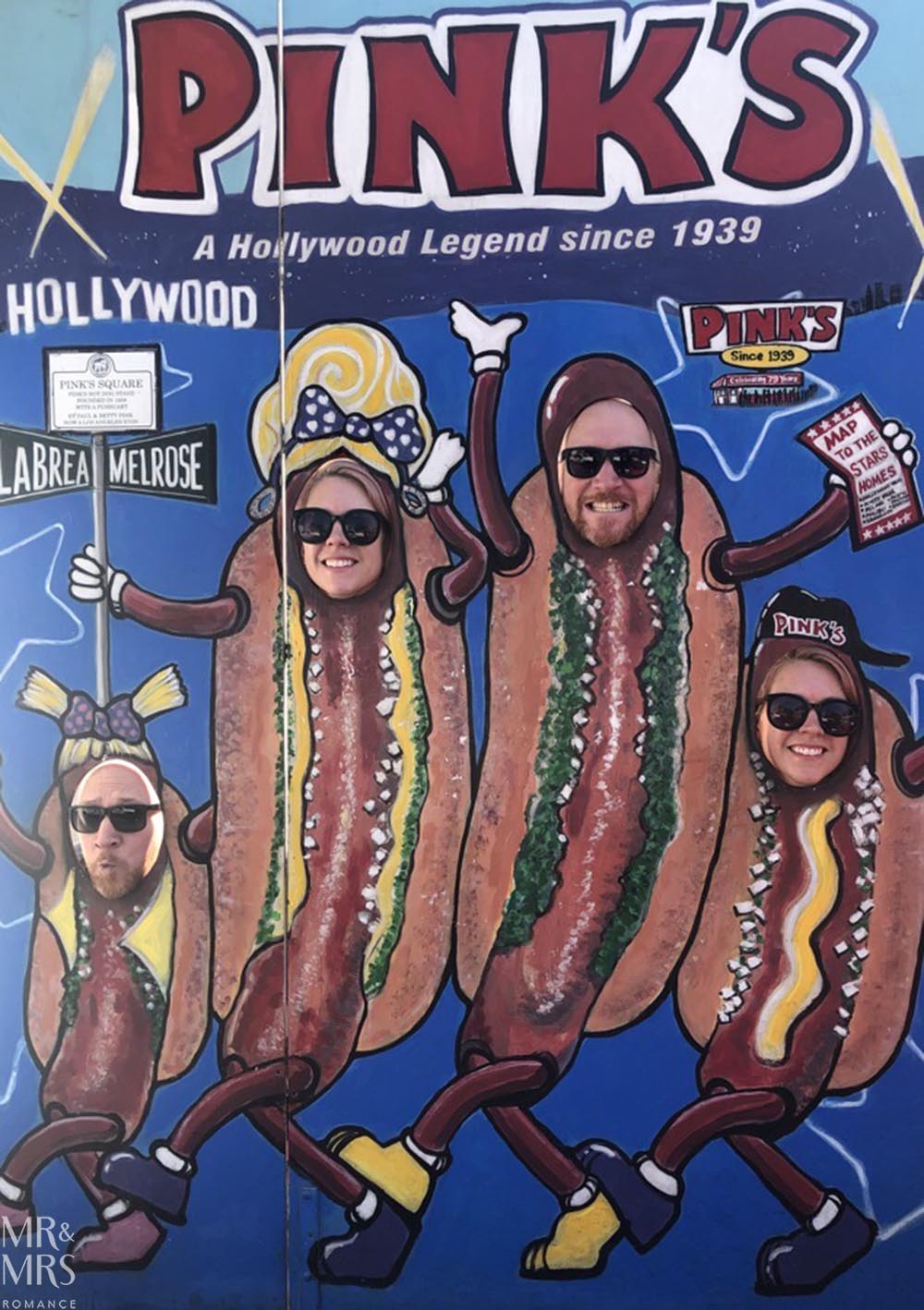 He Said, She Said: do you get a real or fake Christmas tree?

We’re both big fans of Christmas – and Christmas trees of course. But coming from opposite sides of the world – not to mention…