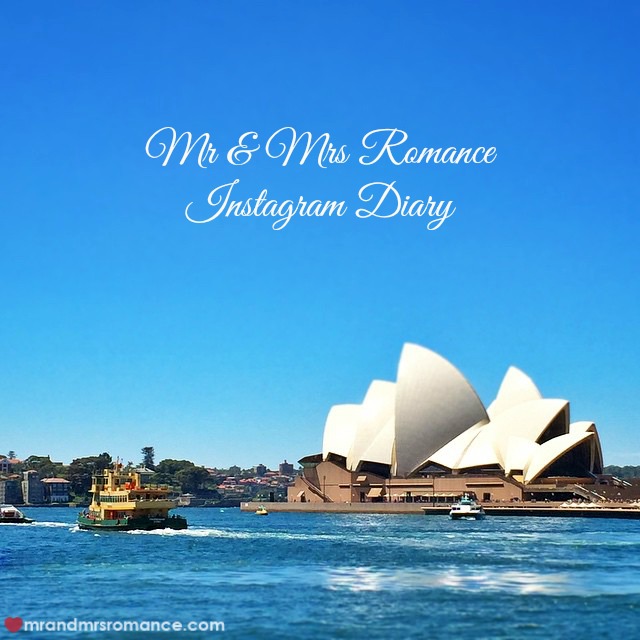 I love this time of year in Sydney. Yes, it’s the end of summer, but the nights are still long – but much cooler, the humidity’s much lower and the sun’s still shining. And the crowds are smaller too of course!

What’s your favourite time of the year? 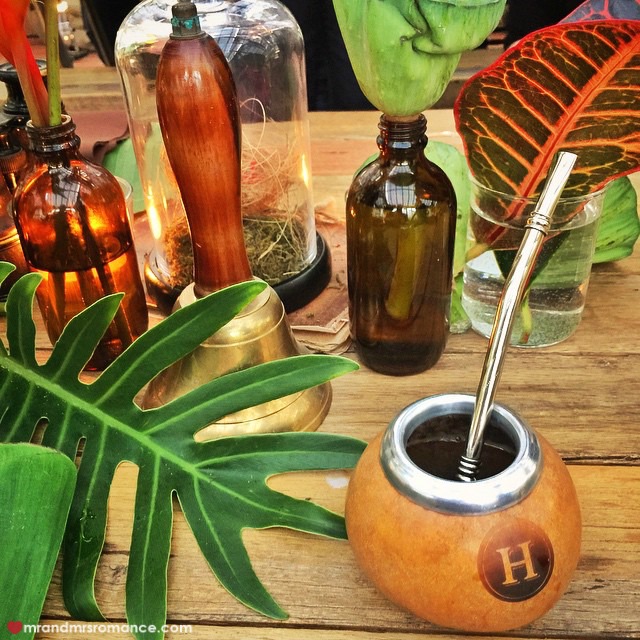 I’m so lucky to have been invited to this amazing event. Hendrick’s have sent David Piper – their international brand ambassador – and Leslie Gracie – their head distiller – all the way deep into the Venezuelan jungle in search of a new botanical.

Did they find it? Better bet your blowpipe they did.

After many adventures, they finally found Stachytarphete Cayennesis or Scorpion Tail. They made 8.5 litres of high-abv distillate in the jungle and brought it back to the UK to create only 360 litres of of special Hendrick’s gin. And I’m getting to taste some if it!

Once it’s all gone, it’s gone. But boy do Hendrick’s know how to celebrate. I’ll tell you a bit more about the night later in the week. 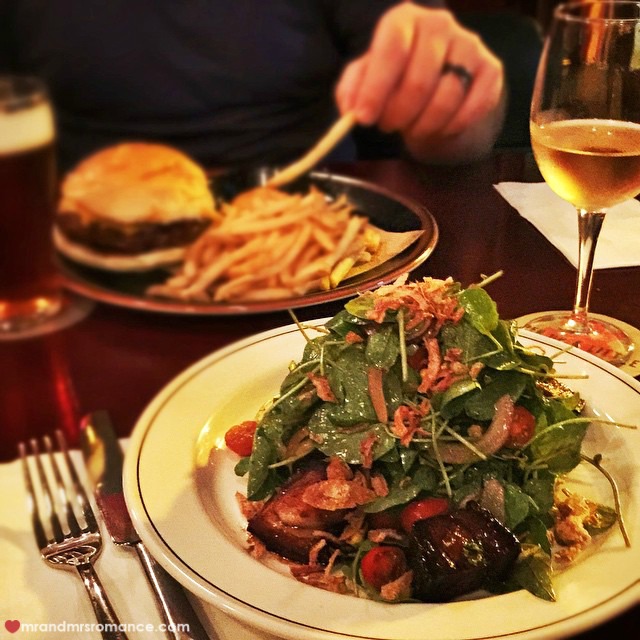 One of the best date nights we’ve had in ages tonight. Earlier we went to the Golden Age Cinema to see the first of their Autumn programme of movies. It was Stand by Me, a classic I thought I’d seen but turns out I’d only read the book. Really good interpretation of the Stephen King classic short story.

For dinner, we’re across the road in Harpoon Harry’s. It’s the newly renovated Macquarie Hotel and we reckon it’s the best incarnation yet. Funnily enough though, they’ve gone for a Cuban theme, which is fine apart from one minor detail:

The food here’s pretty good but in reality, food’s not why you go to Cuba. 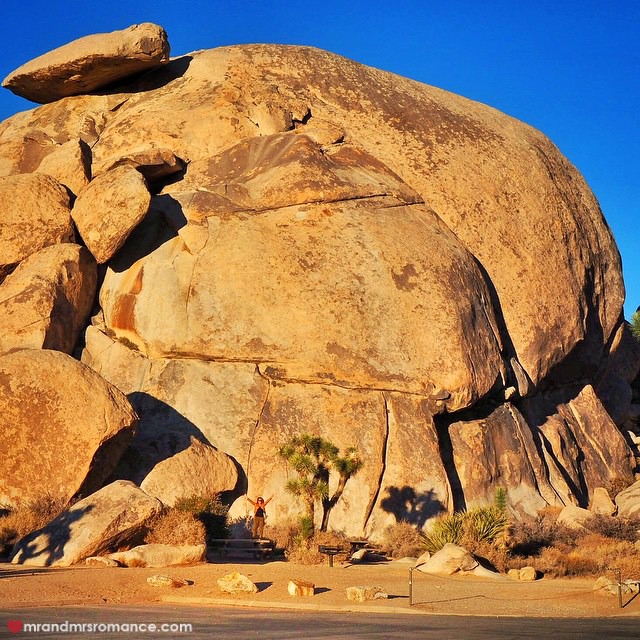 We’re looking back on our time in the States today. The 5-day road trip we did from San Diego to Las Vegas was absolutely amazing! This is a pic from our quick tour of Joshua Tree National Park.

Can you spot Mrs Romance? 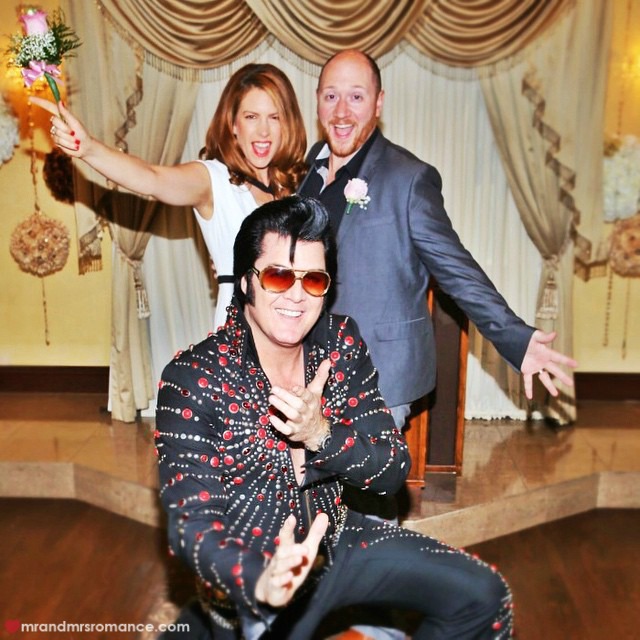 At the end of our road trip, we relaxed in Vegas. And then got married again!

The Elvis in the Graceland Wedding Chapel was incredible. He was so much fun, he really made the night. Here’s the full story of our Elvis wedding in Vegas! 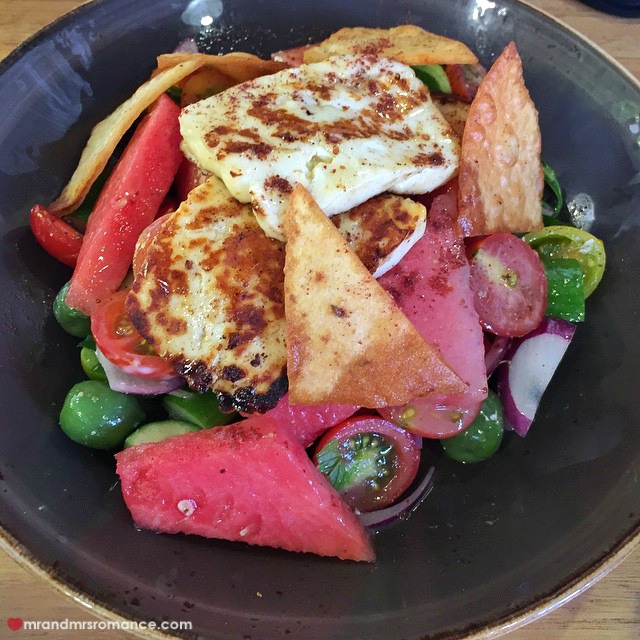 Mrs Romance is out and about today, catching up with the lovely Jen from InteriorsAddict.com. She’s very happy to see Jen, but I’m guessing she’s even happier to see this arrive on the table. Jen’s happiest of all though: it’s her meal!

Thankfully, the food at Cook & Archie’s Cafe in Surry Hills is all pretty darn fine. 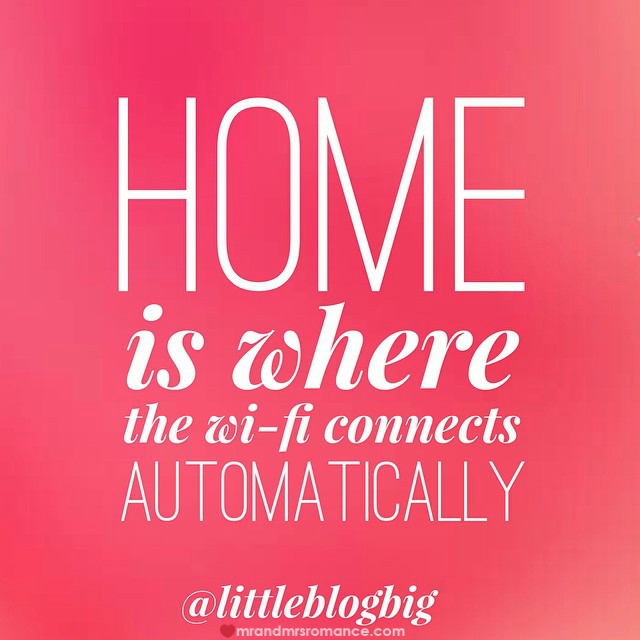 It’s a workshop to help people learn how to grow or start their blog. Learning from people like Mrs R and Carly is about the best way to do it. They’re blog geniuses.

Click here for a bit more detail on what Little Blog Big has to offer. 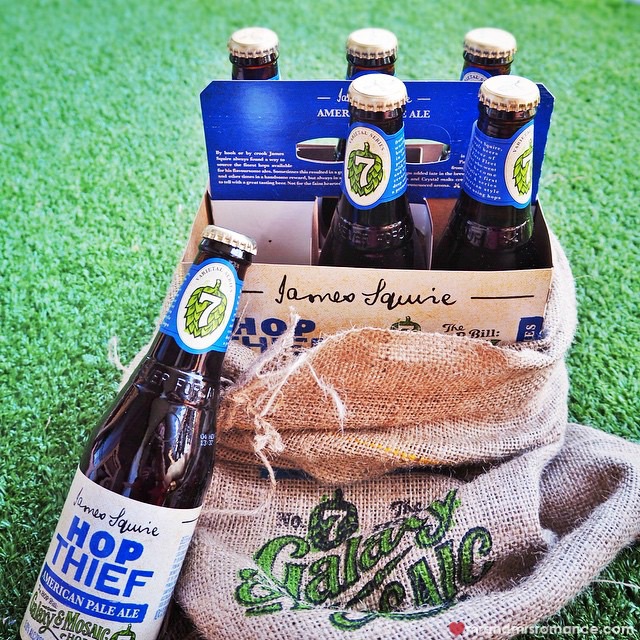 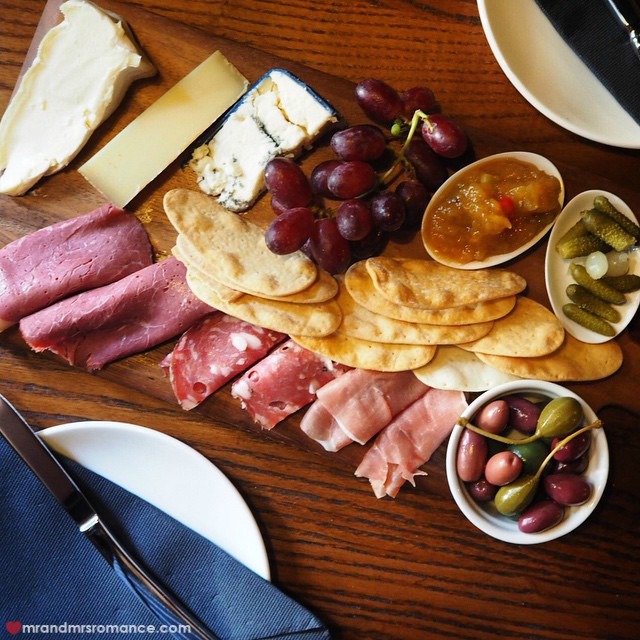 We’re in one of our new favourite bars tonight. Peekaboo Bar in Woolloomooloo is one of those places that feels really welcoming as soon as you walk in through the doors.

They’ve got a great cocktail list, a very respectable yet affordable wine list and what I think is one of the most generous and delicious charcuterie board for just $25. Watch this space for a more in-depth review. 🙂 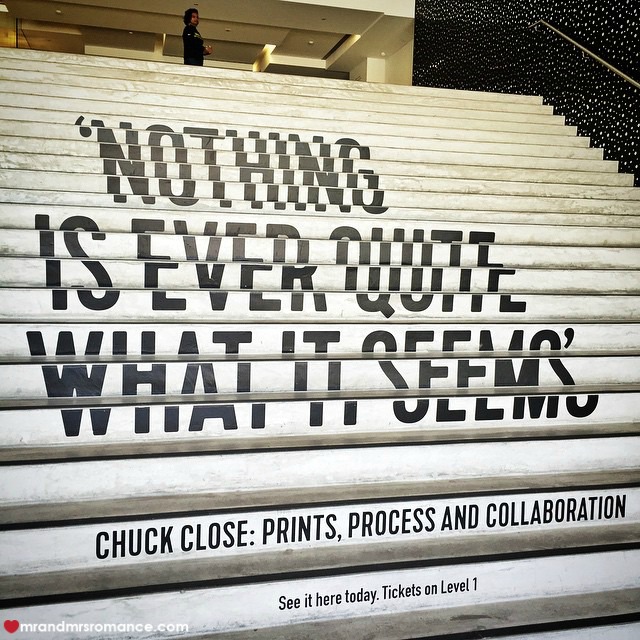 Mrs Romance has finally made it to the Chuck Close exhibit in the Museum of Contemporary Art. She’s been meaning to go for ages so she’s really excited to be here. The exhibit’s name doesn’t particularly fill me with inspiration though: ‘Close to Chuck’ just sounds like walking around the city streets early on a Sunday morning to be honest.

Anyway, she’s very happy to have seen his work. 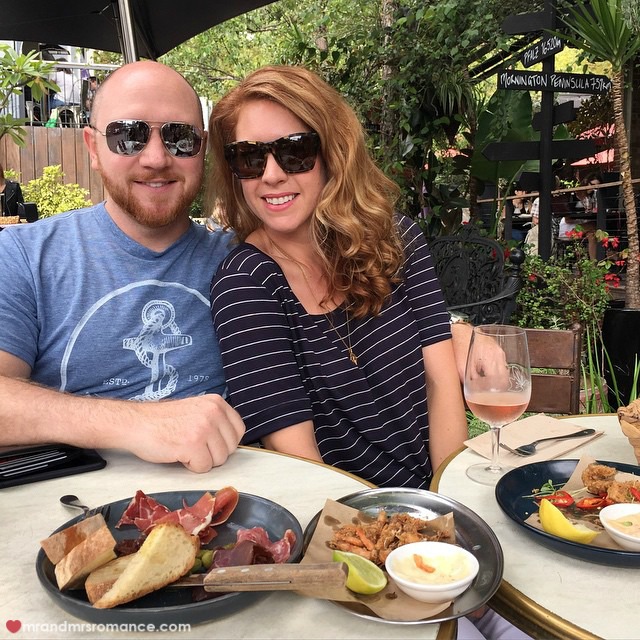 Happy anniversary to us! That’s right, we’ve been married 6 years now! It’s gone so quickly – in the best possible way of course! 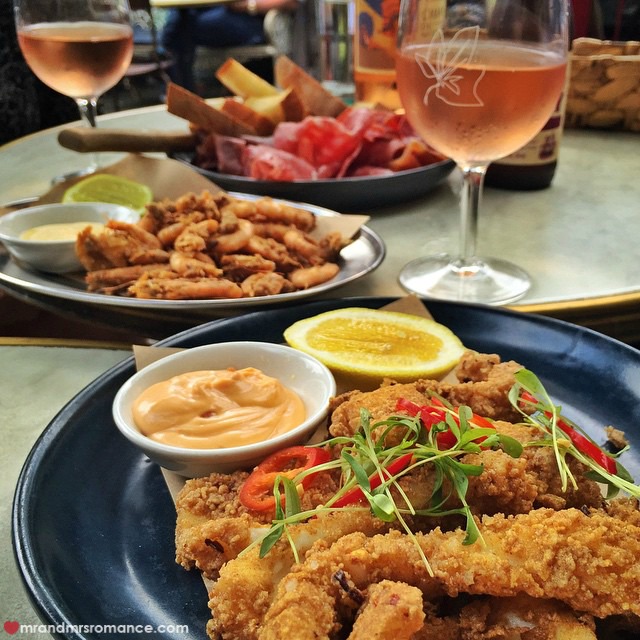 We’re out at the Winery in Surry Hills today, celebrating our anniversary with a couple of awesome friends we haven’t caught up with for ages. The food’s a bit expensive here, but the company and wine more than make up for it. 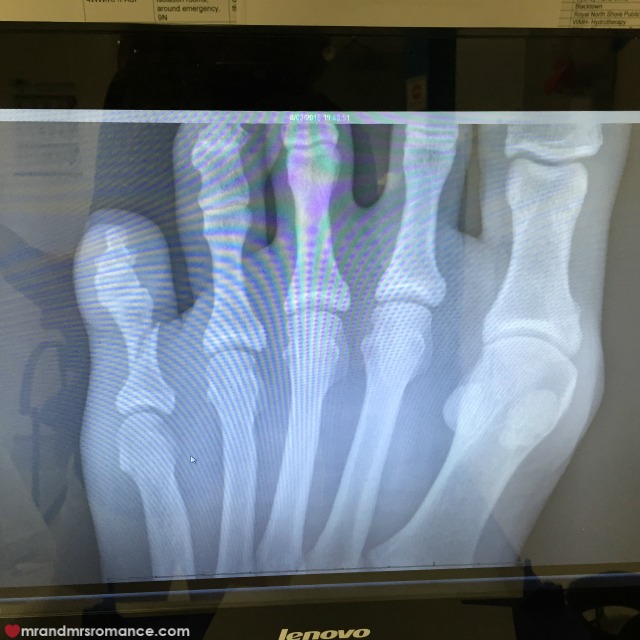 Unfortunately, our anniversary night hasn’t ended with the romance and elegance we were planning on. Mrs Romance decided to kick a doorframe quite hard. It’s ok, the doorframe’s fine. Her little toe, however, hasn’t done quite so well.

At first, she thought it was just dislocated and wanted me to ‘just pop it back in’. I’m glad I didn’t try.

At the hospital, even the x-ray man was impressed with how she handled the pain. I have no idea how she’s still walking around. How nasty does this fracture look? What a brave wife I have.

Have you ever broken a bone? When’s your anniversary? What’s your favourite time of year? Tell us about it in the comments!

Something to read – Christmas gift guide

There’s a sense of great luxury relaxing with a good book. And after a busy Christmas, having something that’ll take you away from it…