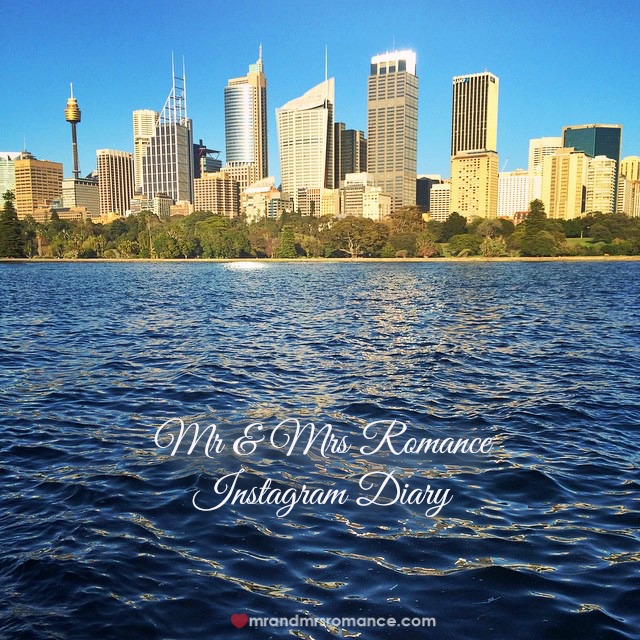 “The best and most beautiful things in the world cannot be seen or touched – they can only be felt with the heart.” Helen Keller said that. Pretty profound, isn’t it?

It’s hard to imagine life without the ability to sense it as fully as most of us can. It’s showing my age a bit, but do you remember those Magic Eye posters everyone was into about 500 years ago? You’d stare and stare at a brain-tumor-inducing pattern, and then someone’d shout ‘oh yeah, I can see the dog with a balloon.’

Then all of a sudden everyone else could too. Apart from me. I got a couple, but it’s probably the reason I need contacts now! It’s people like Helen Keller that make you remember that – just because you can’t see it – it doesn’t mean it isn’t there, and just because people don’t say it’s beautiful, it doesn’t make it ugly… or perhaps it does. I don’t know.

Anyway, enough of my old waffle. Here’s our week on IG. Enjoy! 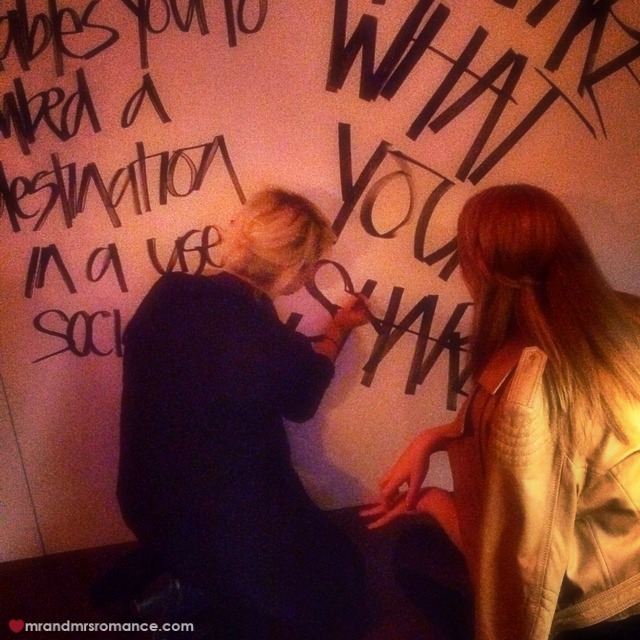 We’re at the opening event for Social Media Week – Sydney tonight. It’s the first of its kind in Australia and involves a series of conference style talks and sessions exploring the world of social media, educating people on things like best practice, and clarifying some of the myths and mystery behind this important marketing tool.

At the event, we find Tania from The Writing creating some of her amazing artwork. She’s incredibly talented – check out some of her work on Instagram @TheWriting – and is busy tonight filling this huge canvas with social media slogans. 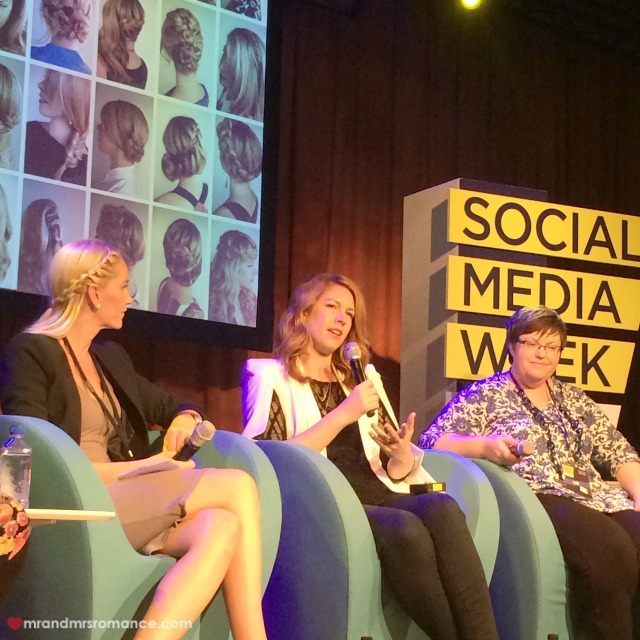 And here she is: Mrs Romance speaking her mind on how to tell a story on social media at #SMWsyd.

She’s speaking on a panel with Naomi Shepherd, Head of FMCG for Facebook (left), Donna Moritz from Socially Sorted (right) and Zach Kitschke, Head of Comms for Canva (not in shot). 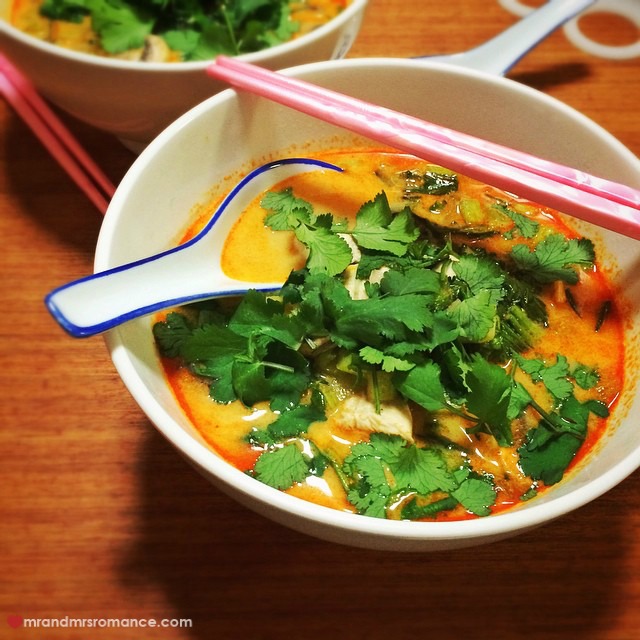 For dinner tonight, Mrs Romance knocks together one of her special dinners. This chicken laksa really is as delicious as it looks. And it only takes her about 20 minutes to put together.

For me, soup isn’t dinner, it’s an entree. But Mrs R is determined to change my mind on that, and I think her work is seeing fruit. I’m ok with this being dinner. Laksa is a perfectly acceptable dinner option. As is this Mexican nacho soup she’s devised. It’s veggie, gluten-free and filling enough for a greedy pig like me to finish and not ask when the main course will be coming! 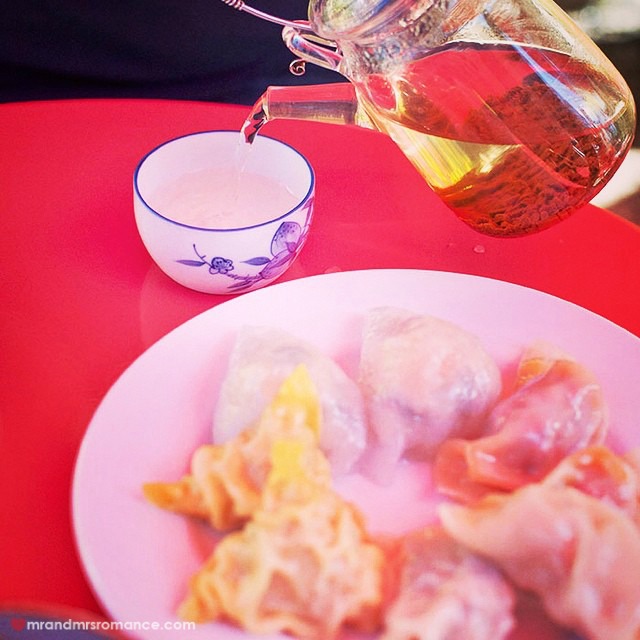 On site today, we divulge the secret dumpling spot of rural New South Wales. 29 Nine 99 in Rylstone has probably the very best dumplings on Earth. I’m serious, people. This place is worth flying across the globe for – especially if you’re a dumpling nut like us!

Here’s our review of this little dumpling gem. Never has living in the countryside seemed so appealing to us! 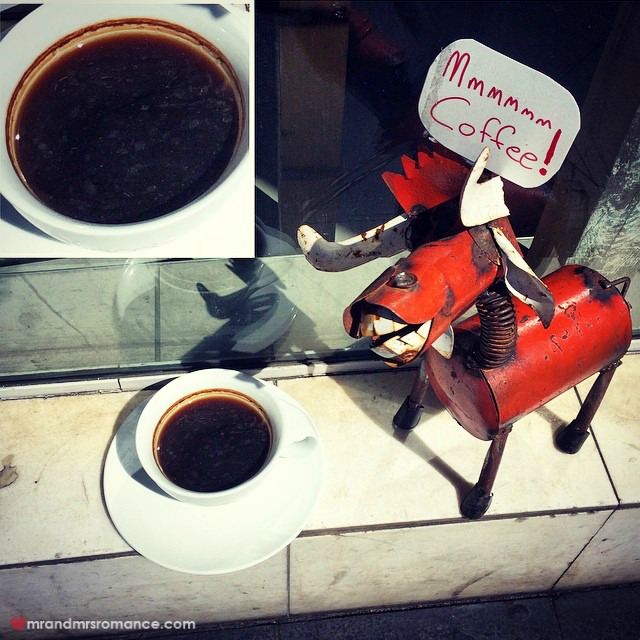 My IG alter-ego occasionally pops his head up for a spot of online negativity. This week he’s spotted something truly confounding on the windowsill of a cafe in Bondi Junction. This is an odd advert for the venue’s coffee, don’t you think? Not only does the coffee itself look truly appalling, but the creature that seems to want to drink it surely isn’t of this planet. 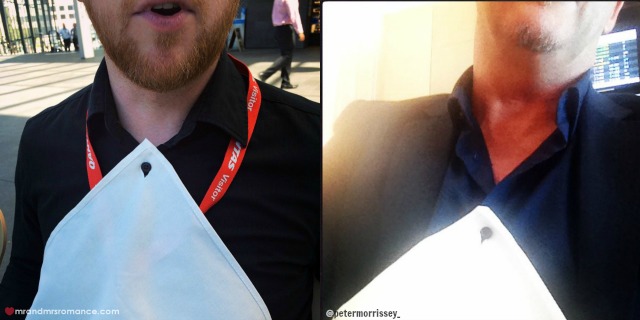 This lunchtime, we’ve been invited to something very unique. We’re in Mascot in Qantas’ head office to sample their new in-flight dinner range. The offices themselves are incredible, with ‘The Street’ being the most impressive part of all. It’s a paved indoor mall with food courts and offices, and futuristic causeways crossing high above.

The new food line is for Economy Class but it’s to a much higher level than what us cattle are used to! In my few times in Business Class, the food I’ve experienced is certainly on a par with this.

As we enjoy things like quinoa, beetroot, goat curd and falafel salad, farfalle pasta with pesto, proscuitto and roasted hazelnuts, I make a discovery.

The napkins Qantas provide were designed by Peter Morrissey and have a little button hole to keep your shirt clean! You see: that’s me on the left and, on the right, there’s Mr Morrissey himself enjoying the functionality of his own design in flight about half an hour later!

I’ll be looking forward to seeing both of these things – the food and the napkin genuis – the next time I’m on a Qantas flight. 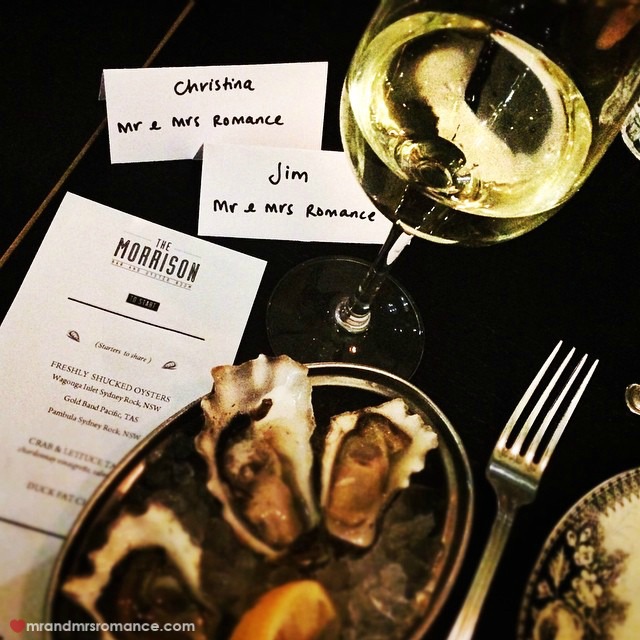 Tonight we’ve been invited to a progressive dinner as part of the build-up to Sydney’s premier hospitality event: Sydney Food and Wine Week. The restaurants we’ll be visiting are all partners of the Citibank Dining Program.

The Citi Moveable Feast is pretty exciting: we’re going to three different restaurants for each part of a three-course meal. We’re starting off in the city at The Morrison Bar & Oyster Room where we’re tucking into this trio of the tastiest oysters I’ve ever eaten and some of The Morrison’s signature duck fat chips. Un. Believe. Able!

Next up is the Chef’s Gallery in the Metcentre, where we’ll watch noodles being made and sample some of the amazing dishes that will be available at the Night Noodle Markets in Hyde Park from Friday 10th October. 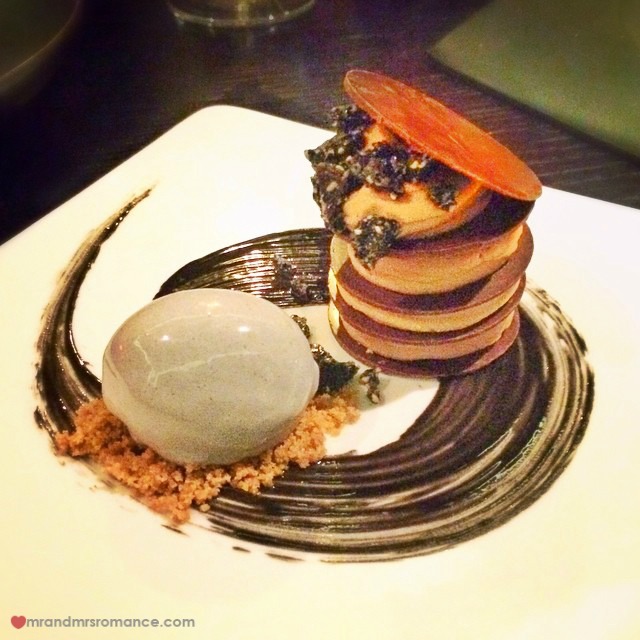 To finish, we’re taken to Sokyo in the Darling, Pyrmont for dessert. The things the guys at this restaurant do with sweets make me want to come back and try their main courses! This stack of peanut butter mousse between discs of tempered choc is sensational! 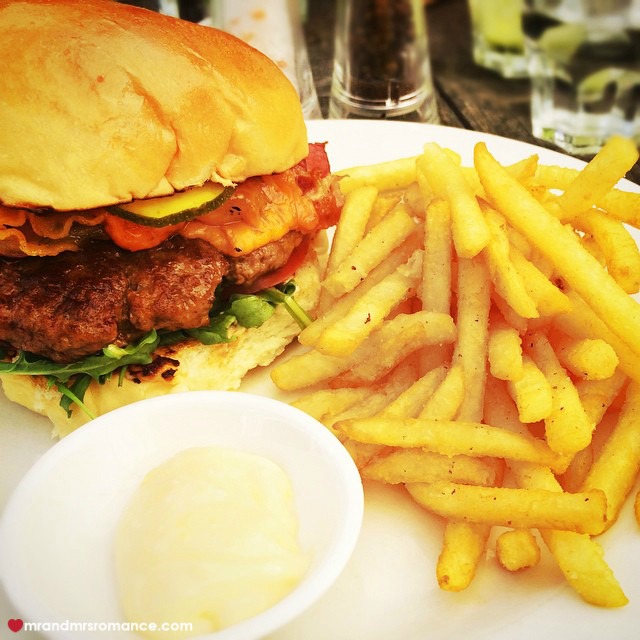 It’s lunchtime! We’re heading to Goblin Cafe – our friend’s place in Summer Hill – to say hi and get some review pics, but also to catch up with the superb Dee from MamaStylista.com. Amazingly, she’s about a week away from having her second baby, but she’s still in excellent form.

My lunch – Goblin’s exquisite burger with crisp bacon, Red Leicester cheese and plenty of pickle and relish – disappears faster than I’m happy about. Mrs Romance isn’t too impressed either, while Dee is politely fascinated. I think.

Anyway, watch this space for our up-coming review of Goblin Cafe. 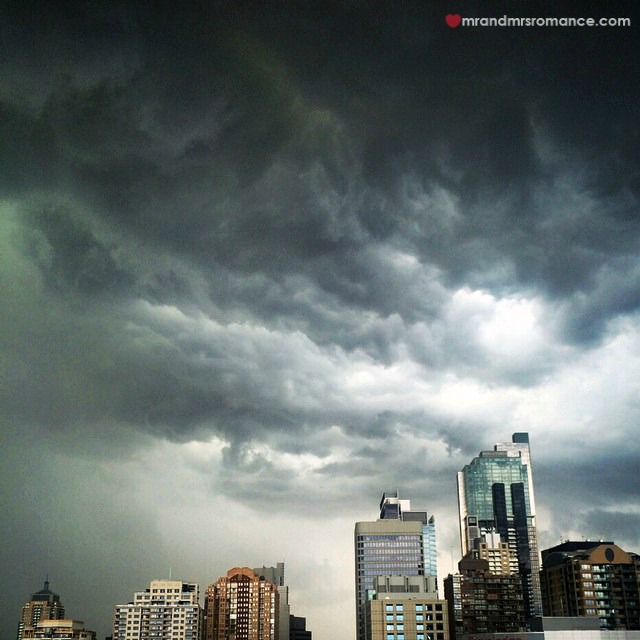 This afternoon isn’t looking good. A storm has made its way over from the west and is about to dump a whole lot of rain, hail, thunder and lightning on the city. Even though we’ve been struck by lightning before (true story) we can’t help ourselves. We head up to the rooftop to watch the clouds roll in.

Check out the spooky green tint to the sky on the left. I’ve since learnt that this means hail! 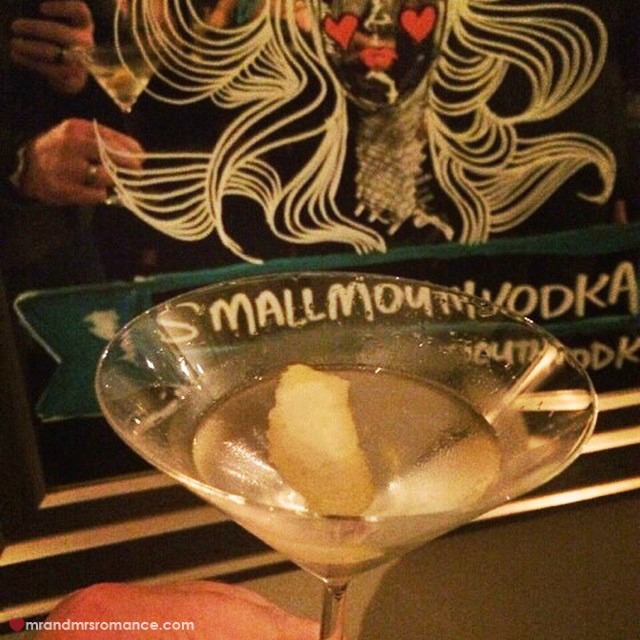 Tonight, I’m with my fine friend Paul (Mrs R’s hurt a toe somehow) celebrating the coming of spring to our fair city. Small Mouth Vodka, who we’ve featured here before, have thrown a party at the Crow Bar in Crows Nest. I love their vodka and it’s great to catch up with them.

You’ll see this excellent example of Aussie craft produce in quite a few bars around Sydney (and one in Adelaide now I hear), so make sure you try some if you do. The Crow Bar offers this as their standard pour, so if you’re drinking something with vodka in it here (and you haven’t been silly and demanded Smirnoff or something terrible), you’ll be enjoying the fruits of Chris and Rohan’s labours. 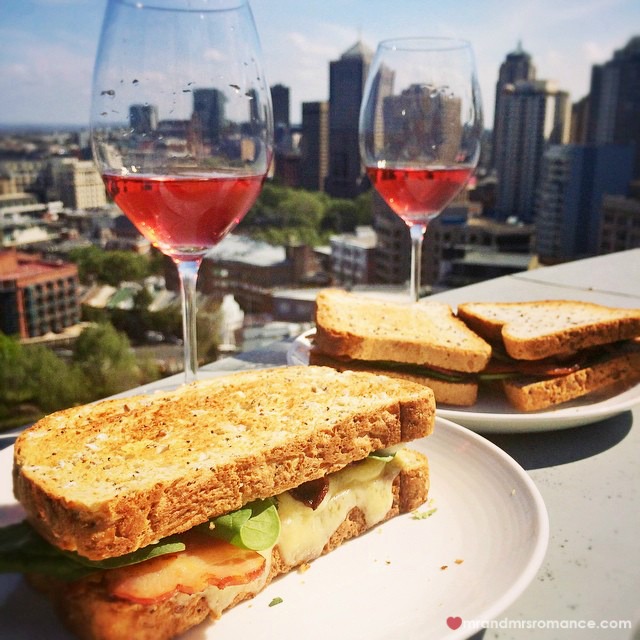 Mrs Romance has been badgering me all morning about what we’re going to have for lunch. I’ve got it all planned out for once though, so come 1pm, we’re heading upstairs to the roof for a bit of al fresco bacon, cheese and onion toasty work.

It’s Friday, so we’re doing the only sensible thing and tucking into a drop of rosé while we eat. Well, it’d be rude not to, wouldn’t it? If you’re interested to find out a bit more about rosé, here’s our run-down of this in-vogue tipple. 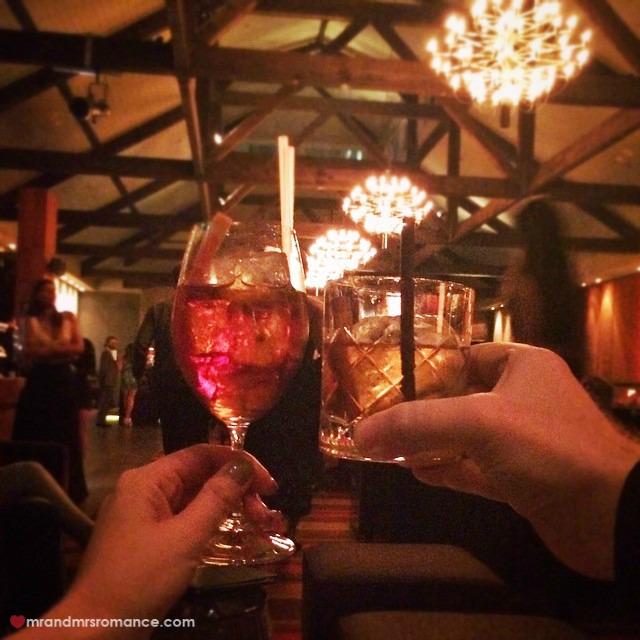 Tonight we’re out for a drink and a bite to eat in Hemmesphere. It’s the first time I’ve been to this pretty exclusive part of the Merivale kingdom. I always thought I’d feel a bit uncomfortable somewhere like this, but everyone takes great care to make you feel welcome.

I suppose that’s the difference between high-end places and regular venues. Higher prices should only mean higher standard of service… and in this case extremely good cocktails!

Mrs R has ordered a Cynar-based bellini type drink and I’ve gone for an old fashioned but with aged tequila and chocolate bitters. They’re both ridiculous!

For food, we have the school prawns (delicious) and the cheese plate. With four different cheeses and plenty of crackers, and is probably one of the best value cheese plates you’ll find in Sydney. 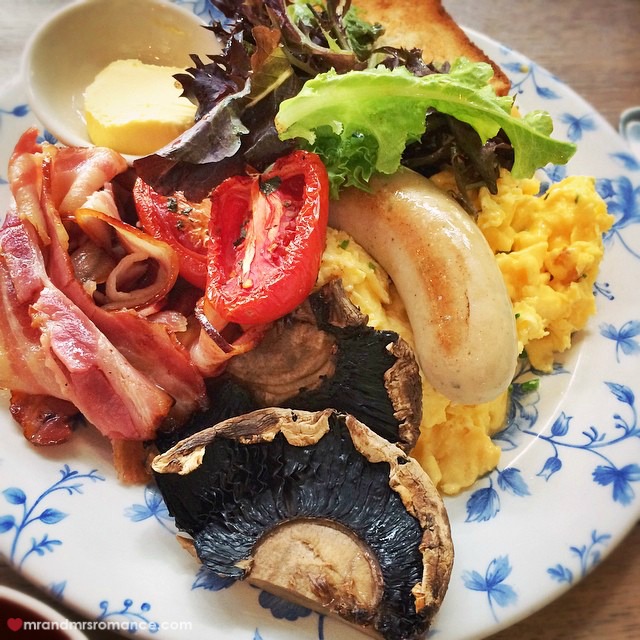 Yum! How good does this look?! We’re out for a brunch catch-up with our new friend Alexx from AlexxStuart.com and her family this morning. This plateful of happy can be found in Rushcutters, Rushcutters Bay, which is not only a cafe/restaurant, there’s also a mini organic market inside. 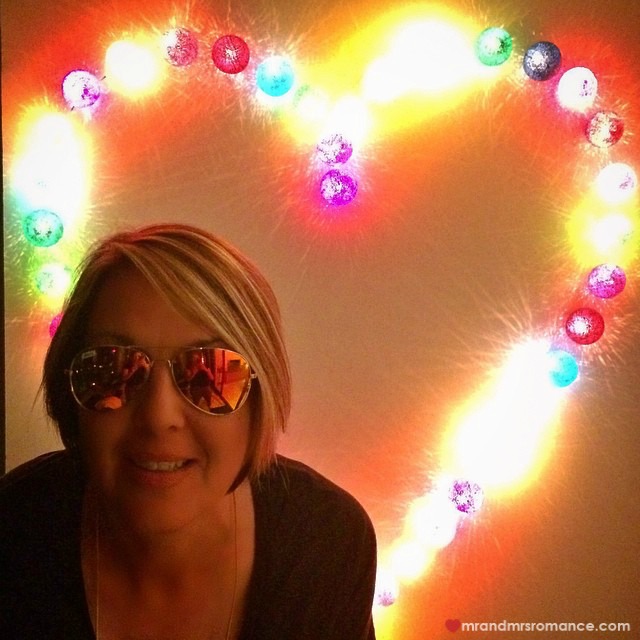 Tonight is the annual Bar Awards for Bar Week in Australia. It basically means a load of people who are usually behind the bar getting to hop to the other side and enjoy themselves. And believe me, they know how to do this.

Anyway, from our side of the bar (and the computer keyboard) the spectacular Caroline from TheGinQueen.com is round ours celebrating the end of the event. Loving those aviators, darling! 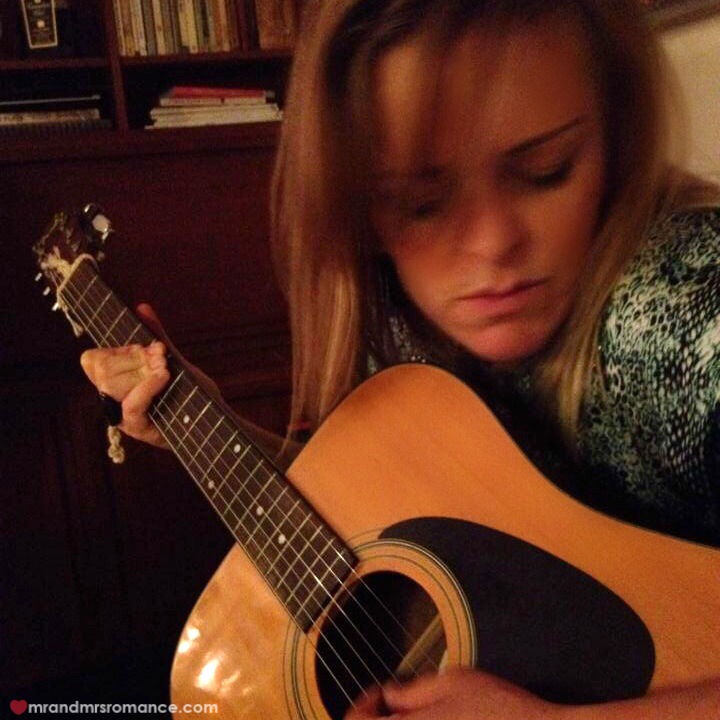 With Caroline is the smoking gun behind the Nip of Courage – Kathleen. Her guitar skills aren’t up to much but I don’t blame her at this time of night. She looks pretty cool though, ay?

It’s been yet another booze-packed, fun-stuffed, food-filled week! How’s your week been? Any great food eaten? Any delicious wine, beer or spirits you approve of? Tell us in the comments!

10 Ways to Get into The Spirits of Christmas

Anyone who thinks the spirit of Christmas is dead hasn’t seen our gift ideas of gins, whiskies, vodkas and accessories this year – not…