Of all the Tuscan cities to use as a base, I do believe Siena is the best. 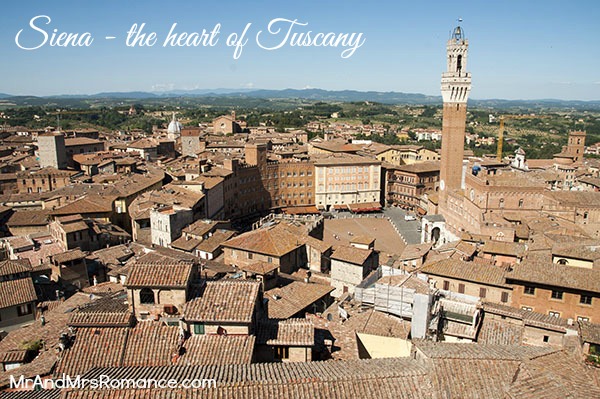 It’s big enough to keep you entertained on days you don’t feel like heading out in the car to explore the rest of Tuscany.

On the other hand, it’s small enough for you to be able to get a true feeling of the city in a day or two. It’s also a great walking city. 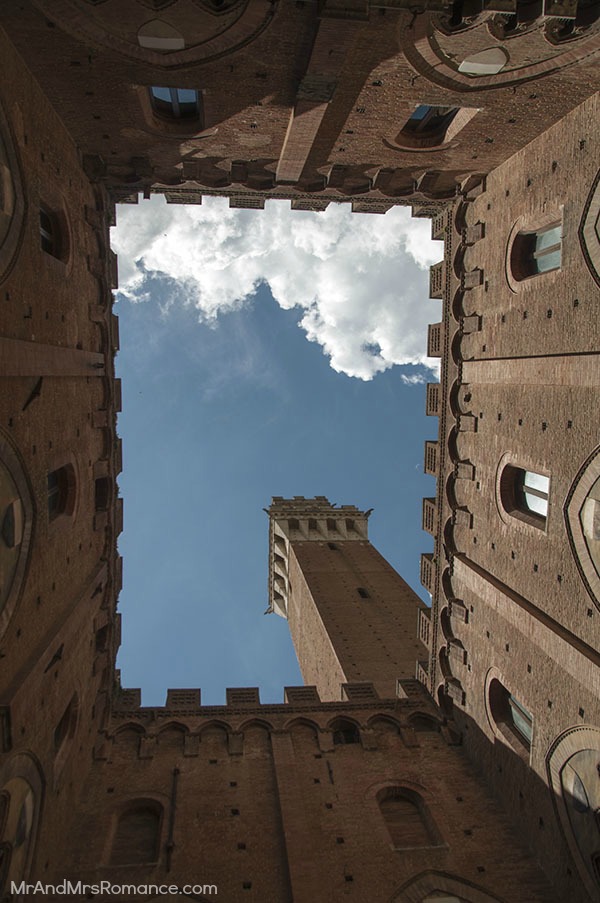 Because Siena is a walled city – a bit like Tallinn in Estonia or Avignon in France – everything is confined to be within its walls. It’s its own captive audience!

We based ourselves in Siena on the say-so of our very dear Friend Riccardo, who’s from Tuscany. Thank you, Riccardo. You were spot on, mate! 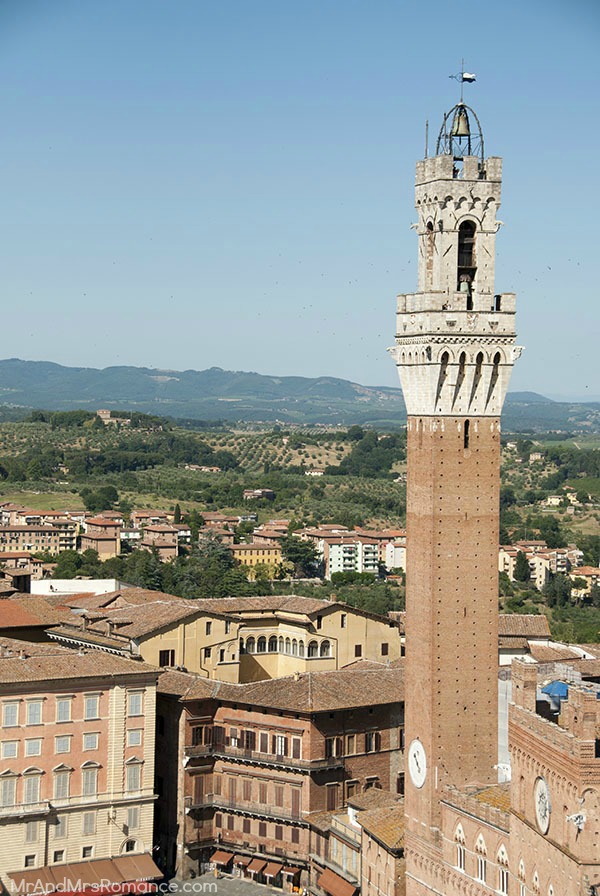 Siena is in the middle of Tuscany, on the ‘knee’ of the boot of Italy’s north-west.

How old is it? 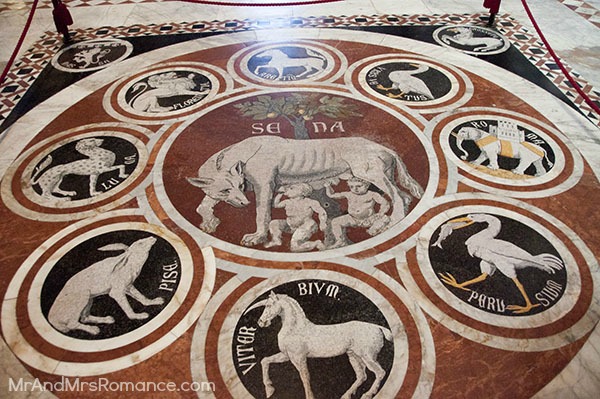 Siena was settle in about 900 BC by the Etruscans. In Roman times, Senius, son of Remus, is said to have settled the town. This is why the town’s emblem is the she-wolf suckling Romulus and Remus.

How big is it? 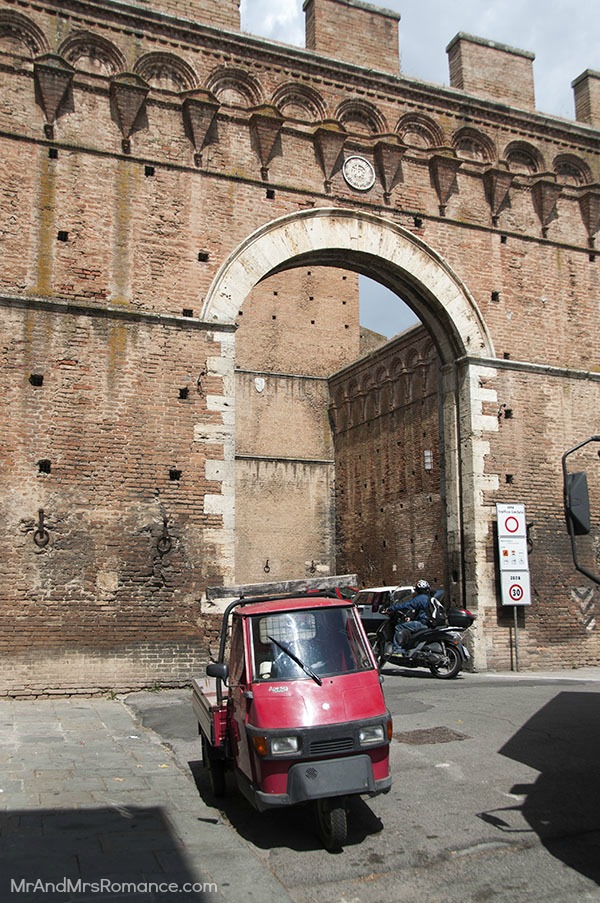 Because it’s a walled city, you can walk from one side of Siena to the other in about 20 minutes.

How do you get there? 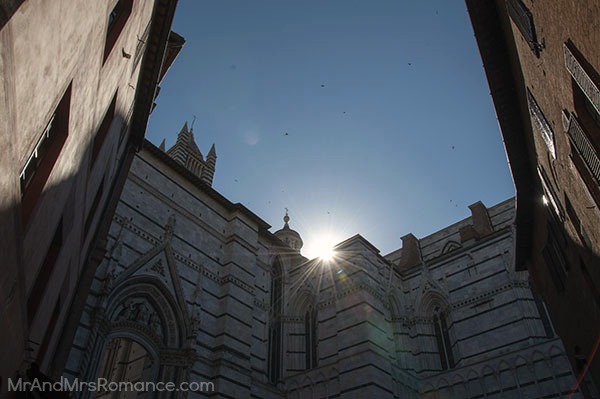 Driving to Siena is easy. It is a central hub of Tuscany, so many roads lead here… a bit like Rome!

The closest airports are either Pisa or Florence. Get the SITA bus from Florence to Siena. There are also buses from Bologna airport.

You can get trains from Florence or Pisa too, but Siena’s train station is outside the city’s walls. You’ll need to get a taxi into the city, especially if you have luggage. 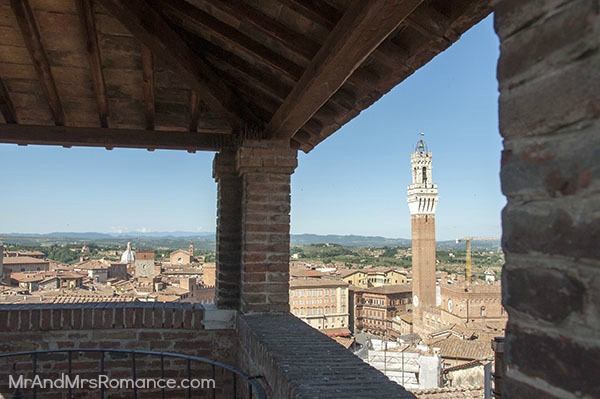 It’s a beautiful city as you’ll find out, but it’s also close to these other amazing places:

See our post on how to spend a week in Tuscany for more details about these beautiful towns.

So, what’s there to do in Siena? 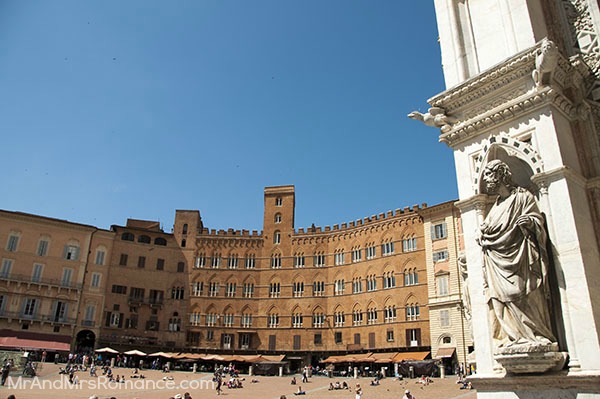 The main piazza – Piazza del Campo – is the largest medieval square in existence. It’s a popular meeting place for locals and is amazing for people-watching.

People use this spot to meet friends, have lunch, even to have wedding photos taken! It’s also the site of the famous Il Palio horse race that happens twice every summer. 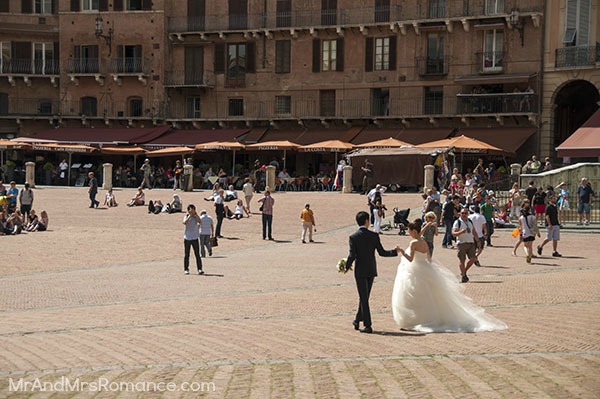 In the Piazza del Campo, you’ll see the great Torre del Magna – a magnificent tower which is the highest building (and therefore has the best vantage point) in the area. Also, in the piazza, check out the fountain. It’s beautiful!

Don’t bother with the restaurants around the piazza. They’re over-priced and not particularly good. 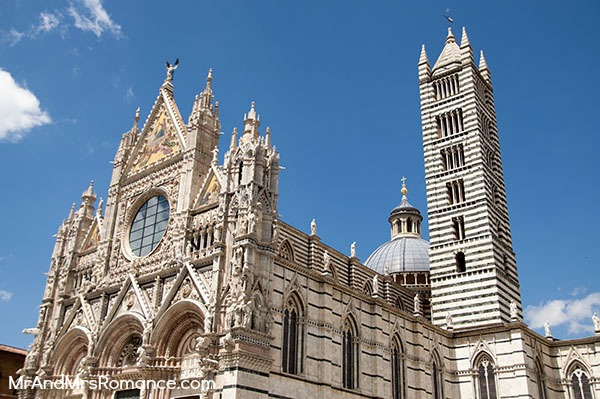 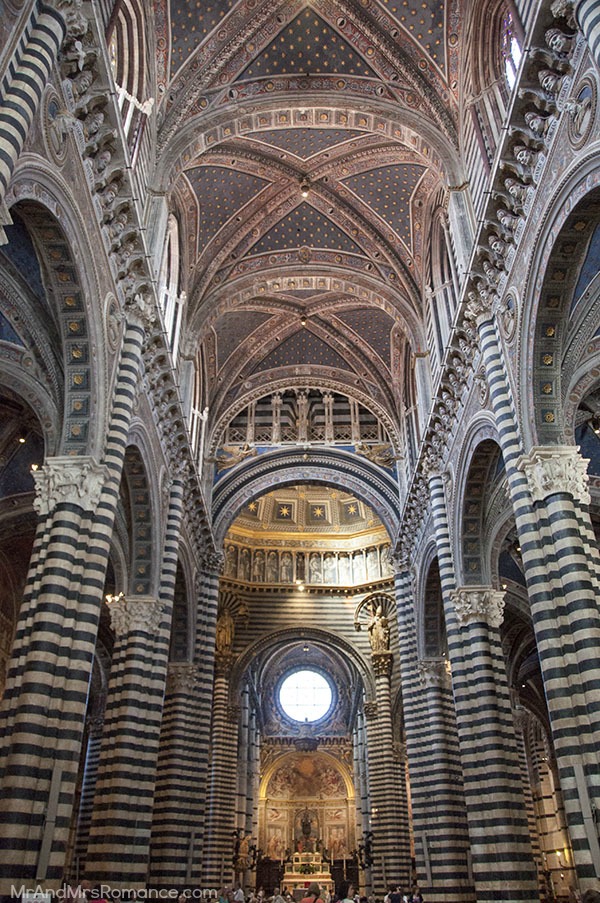 Definitely visit the Duomo di Siena. Its black and white striped design is hard to miss and even harder to forget. Inside are amazing mosaics. To preserve these ancient stone works of art, they are covered in sections so that only a small area of the whole cathedral floor is shown at a time. 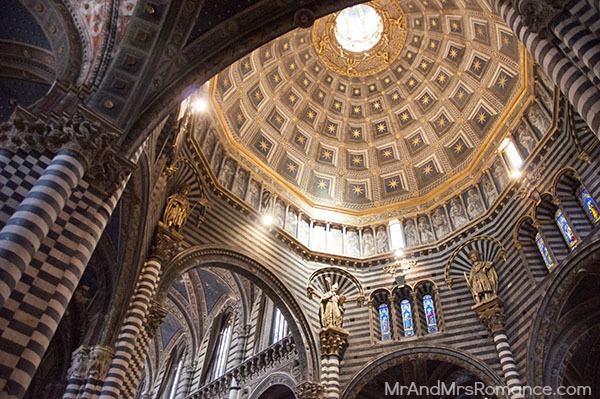 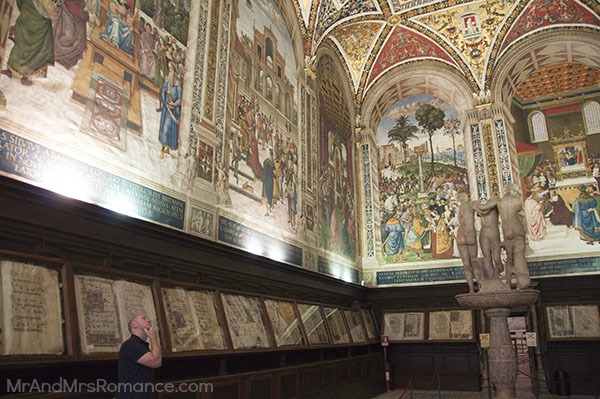 There is a room dedicated to these huge, ancient books, and there is also a museum of rather unusual and ancient religious artifacts. Check out the collection of mummified limbs of past priests and saints, which are kept in special jeweled boxes. Very creepy but quite entertaining.

All of this is highlighted by another superb view of the city from one of the towers of the duomo. This is well worth the climb. The doorways along the wall are so small I could barely get through them. 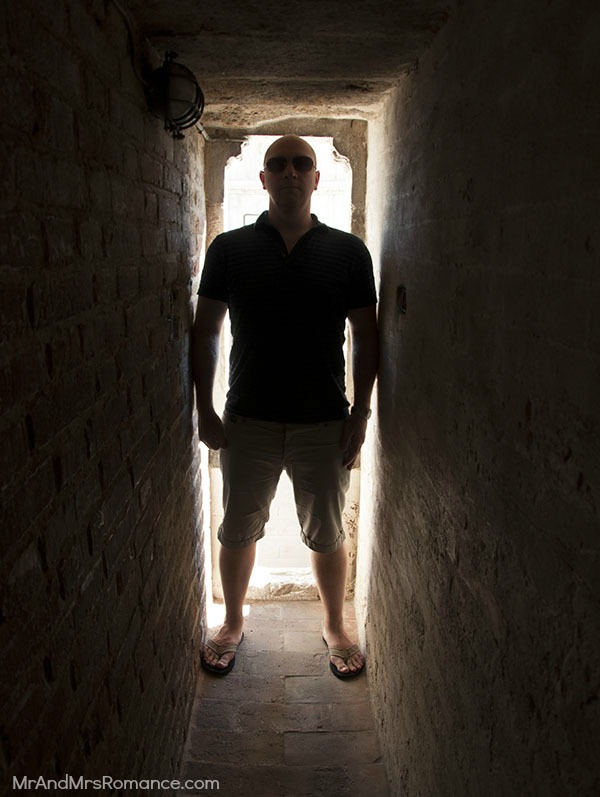 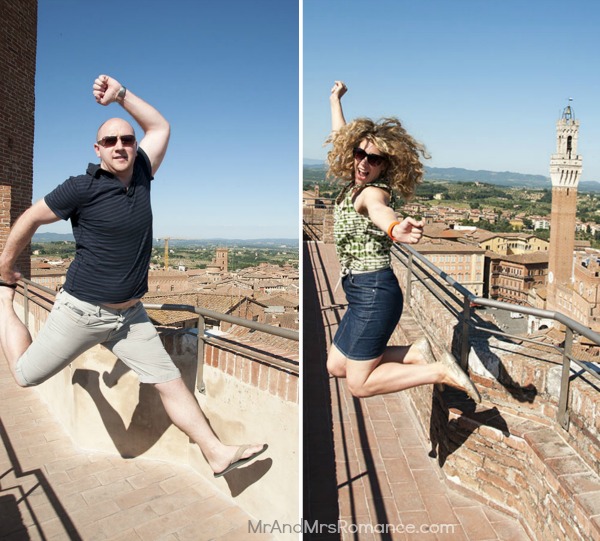 If nothing else, Siena is the perfect place to wander around, taking in the views of one of the prettiest yet impressive towns you’ll visit.

The number of lovely little nooks and parks we found, the views from high-up places, the looming impressive architecture of this medieval city… it’s a truly interesting place to explore. 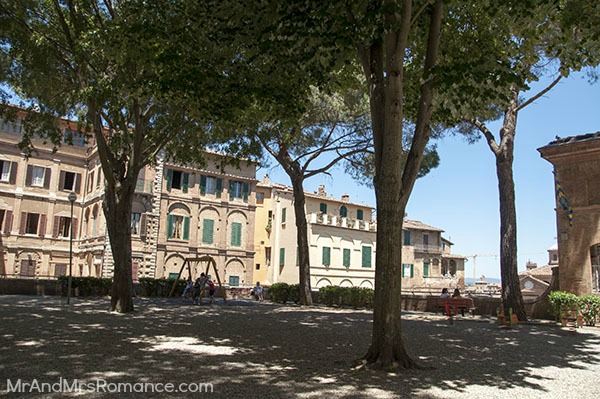 Where’s good to stay in Siena? 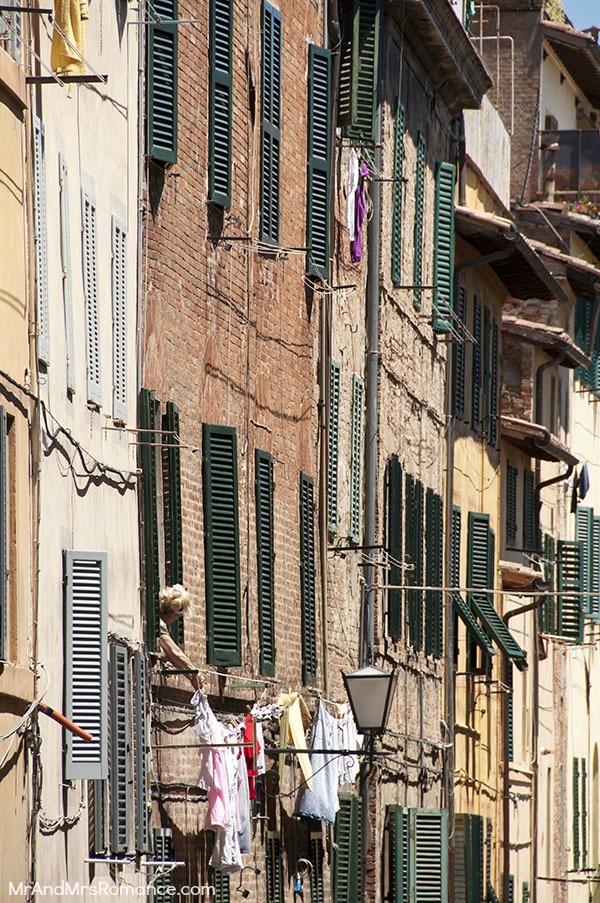 If you have a car, don’t bother trying to find a hotel with parking within the city walls. Not only is driving in Siena a harrowing experience, I am skeptical of the existence of parking there. The hotels are also more expensive when you go through the gates.

I found a place just outside the walls on Via Aretina – near the Porto Pispini – called Hotel Alex. The staff were lovely (especially Sara, who was extremely helpful) and the rooms were comfortable enough and well-tended.

There is also off-street parking available, though as with all parking in Italy, you do need some killer skills [polishes nails on chest] to get in and out of the subterranean car park.

Where to eat in Siena 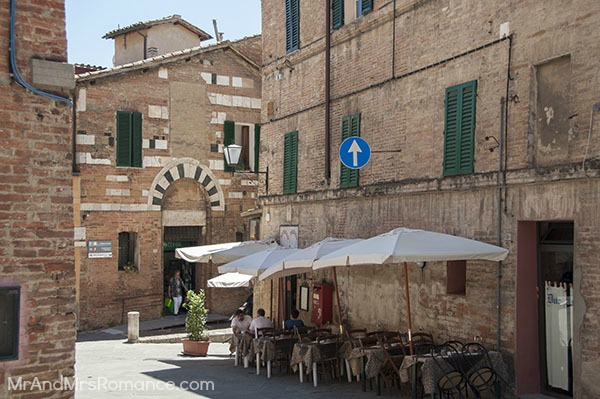 This little city is jammed with places to fill you up. As I said before, avoid the places in the piazza. They charge the earth for terrible service and even worse food – though we did have a drink at one, just for the view.

Osteria Cice  (pronounced ‘chiche’) is about as old-school as Italian restaurants get. This little place is set into the walls so it feels like you’re eating in a wine cellar. It’s very similar to Sydney’s own Beppi’s. We loved this place.

Osteria Sosta di Violante was a recommendation from Sara from Hotel Alex. She’s totally on the ball and we had a great meal here too.

Il Fico Mezza, which means the half-drunken fool (though is probably something else in the local dialect), is also a cool little eatery we visited and enjoyed a lot. 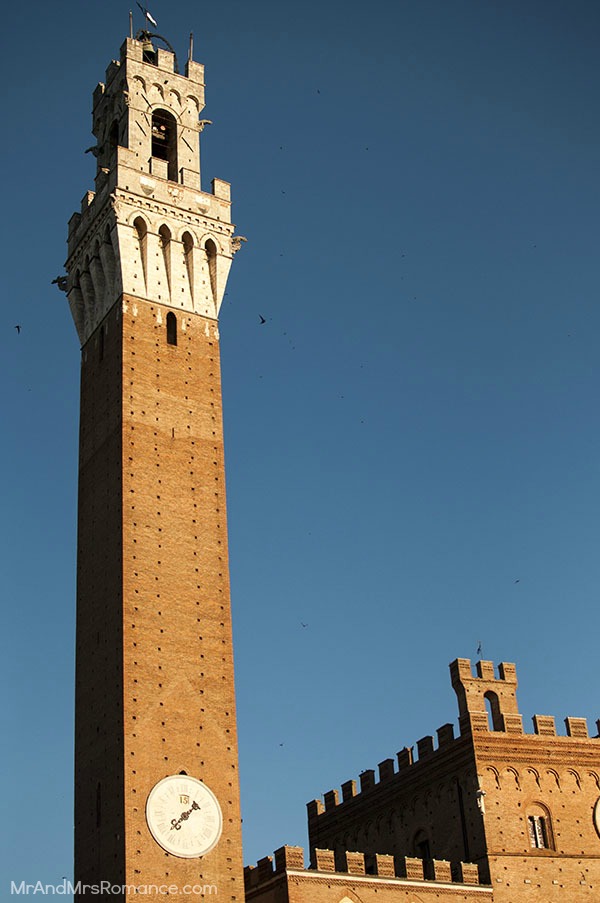 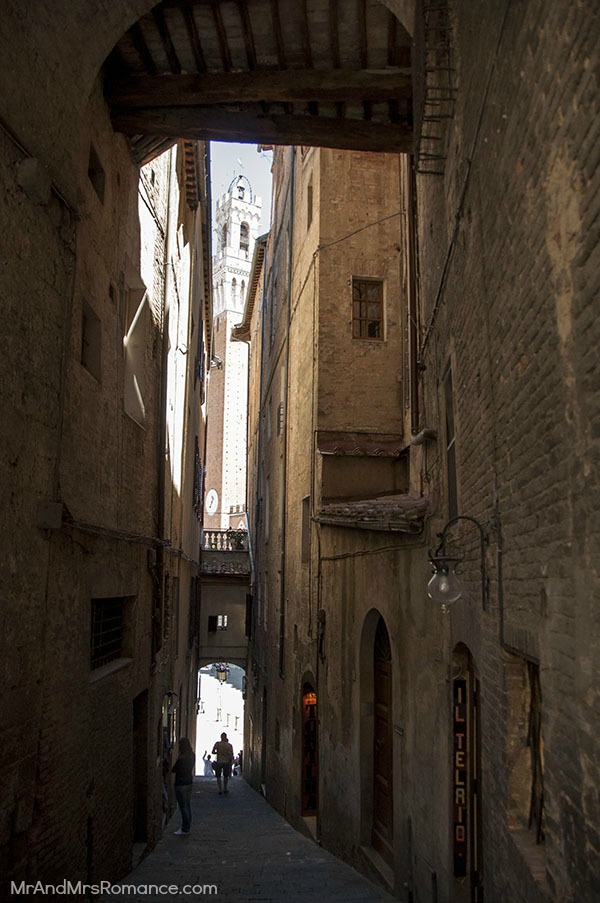 The best part of staying in Siena is that the tourists there during the day are based elsewhere – Rome or Florence for example. So by late afternoon, the place empties and the locals come out of hiding.

The city changes from being a place of mob-handed tourists to a real, functioning, Tuscan city. The streets come alive.

With young people hitting the osterias and bars, lovers walking hand in hand to sit in the Piazza del Campo, families heading to the ristorantes only locals know about… and the best part: you feel like one of them. 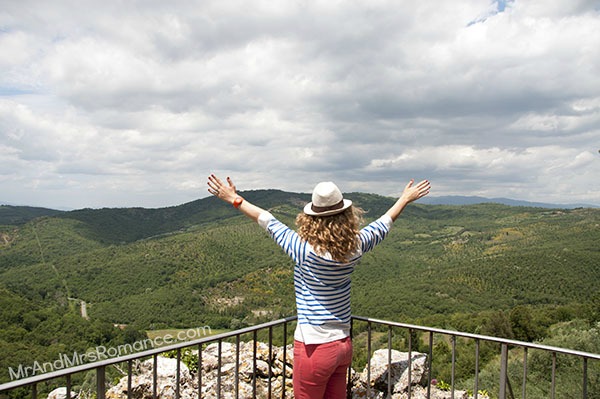 Where’s your favourite part of Tuscany? Tell us in the comments!

Typical of all good Melbourne finds, the Cosmopolitan Hotel is tucked away down a side street. A block or two back from the St…