Just 30 minutes from the Hunter Valley’s wine country and the same from Newcastle, is the little town of Morpeth, NSW. Once the epicentre of colonial life and the genesis of Arnott’s Biscuits, Morpeth now sits beside the Hunter River waiting to show its history, culture and community to discerning travellers. 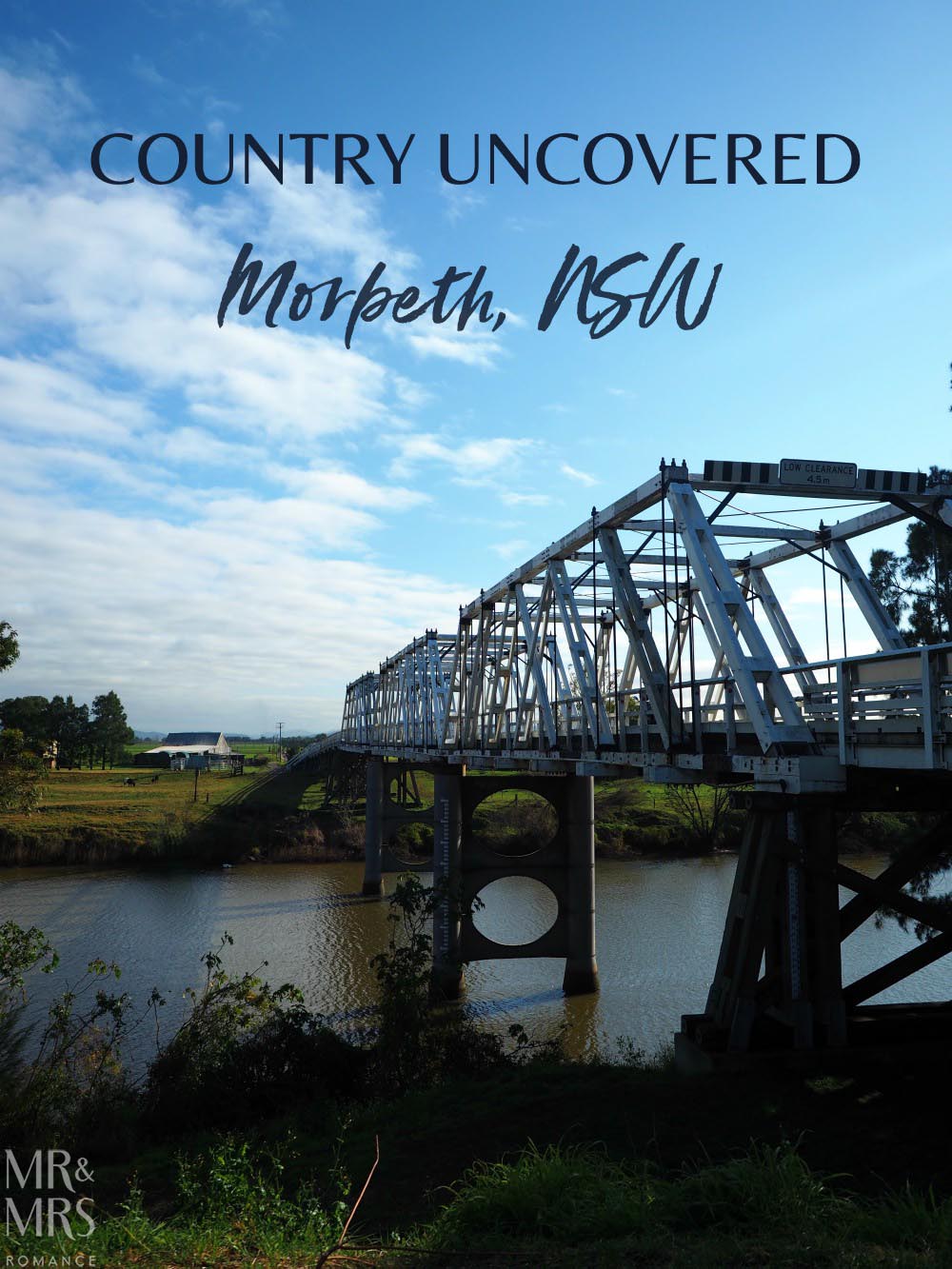 In spite of its vastness, Australia is becoming ever smaller. Bypasses, freeways and more coverage from domestic flights pull travel hubs towards us, cutting transit time and encouraging more travel around the country.

Although it means it’s easier for us to see more of Australia, the paradox is we tend to see less of it at the same time.

As we fizz past towns on the freeway, towns that once would have been important stopping points on slower roads, we’re missing out on so much of that makes – and has made – Australia. 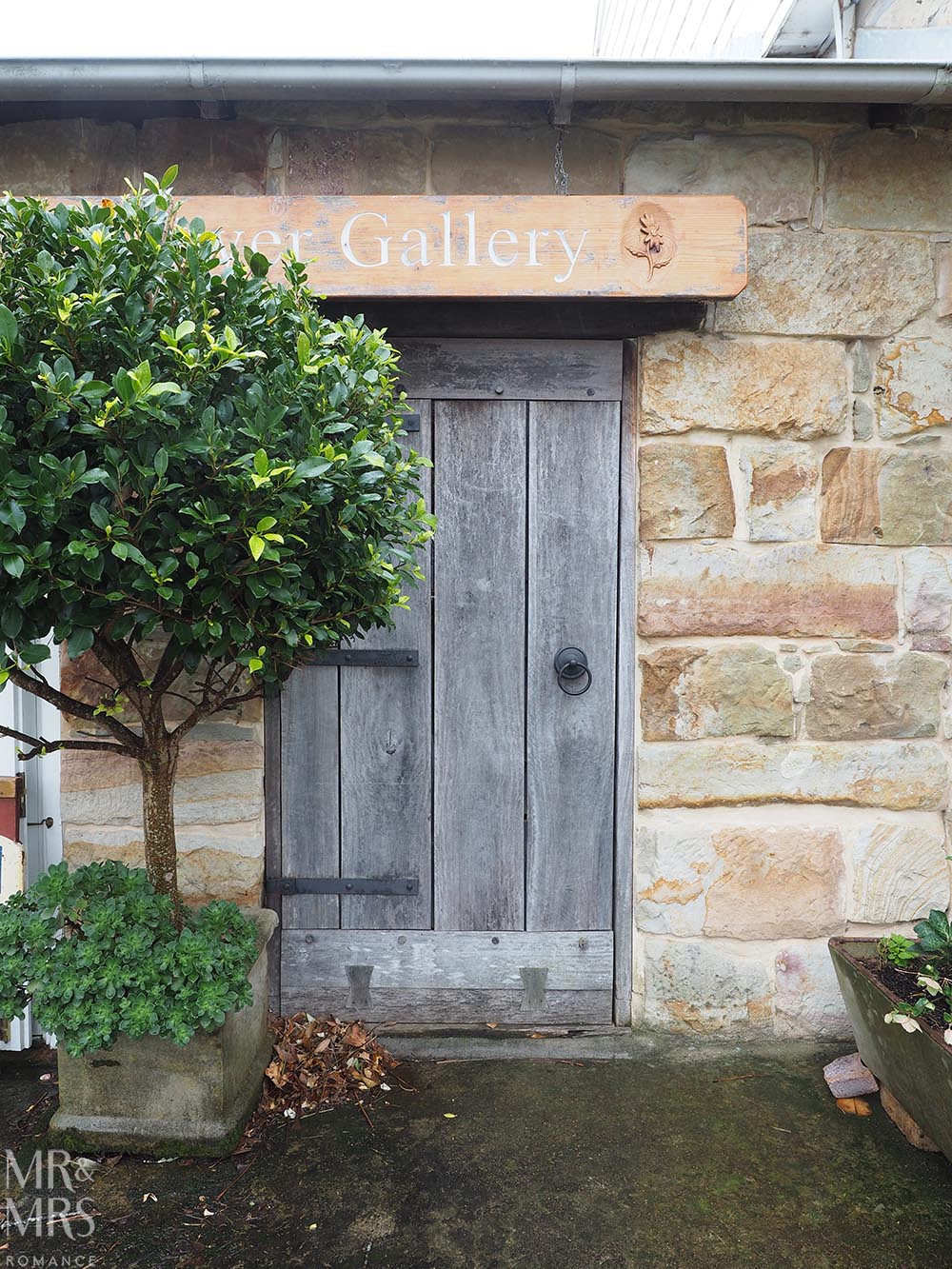 Morpeth, a little one-street town in the Lower Hunter Region of NSW, could possibly be the first casualty of this kind of growth and change.

Once one of the most important points in Colonial Australia, Morpeth is now a quaint river-side community with a couple of old-school pubs, some busy cafes and stone-bricked bakeries.

However, not far beneath the surface, this pretty little town holds the keys that unlock this country’s history and explains all the details you start noticing the longer you’re in Morpeth.

Why is there such a big, iconic bridge here? Why are the buildings all so grand for such a little town? And why are there still two pubs and an old rail line here?

In fact, why is there a town here at all? 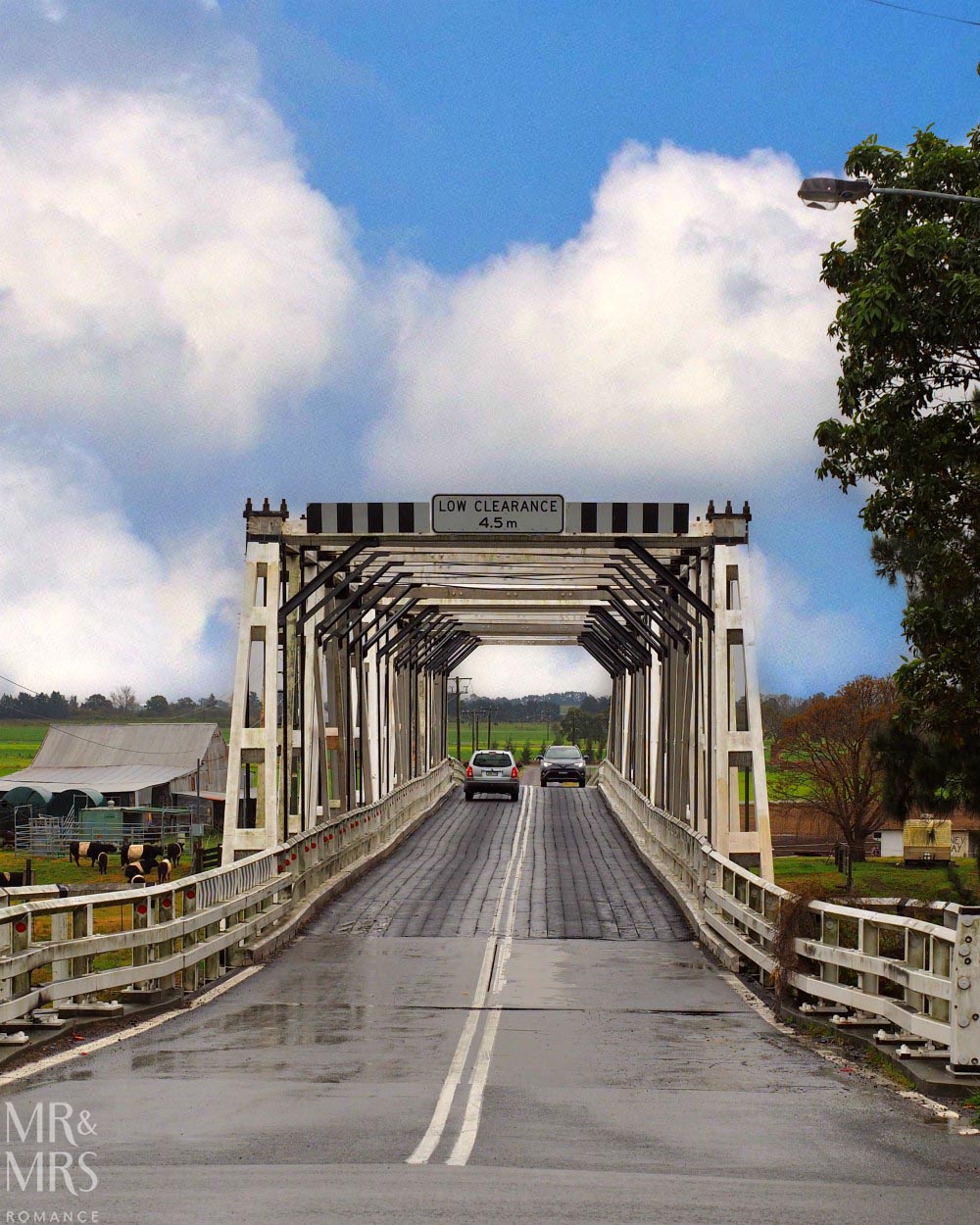 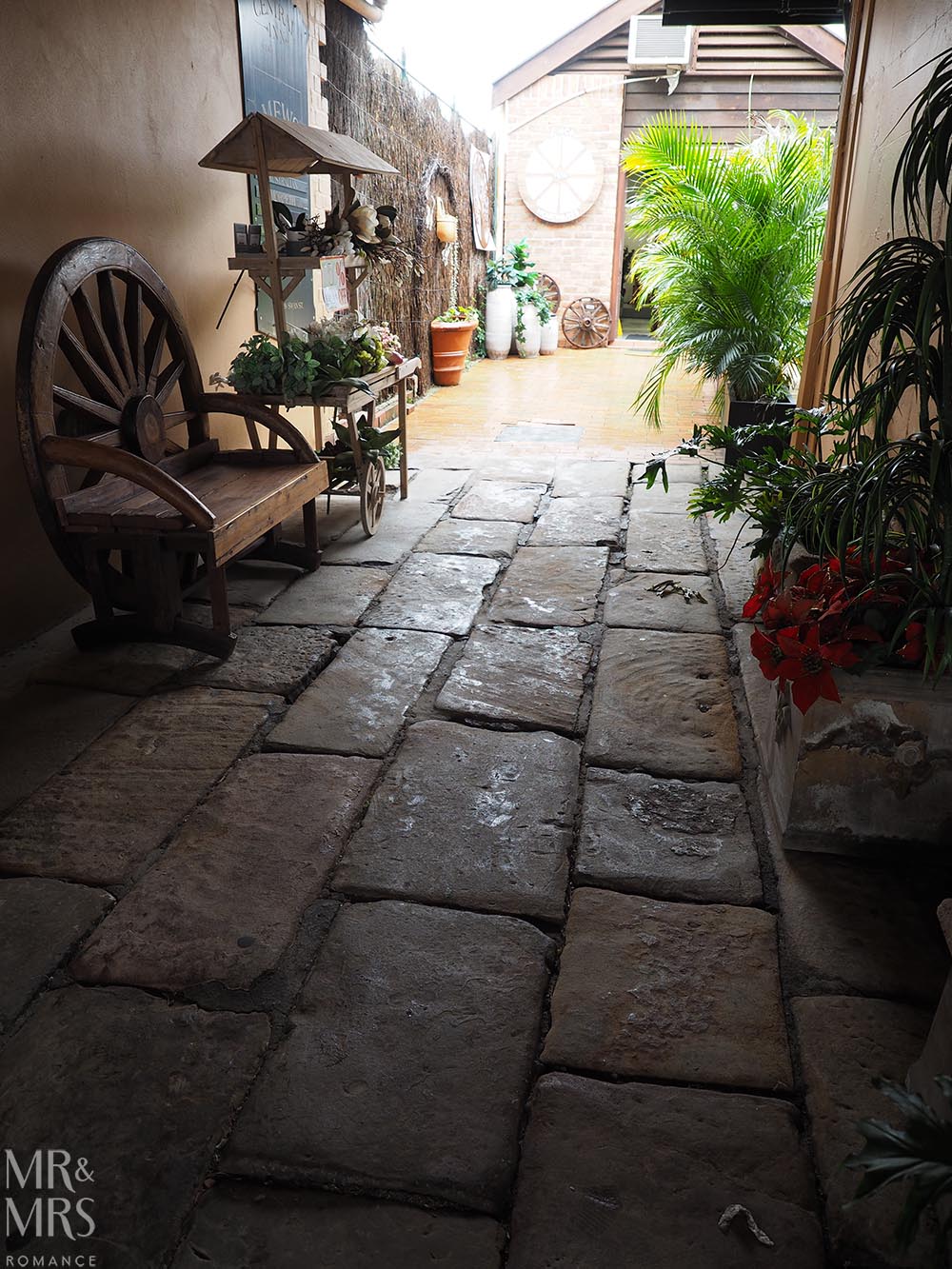 While William Arnott (yes, the Arnott) was still busy setting up his first bakery on Swan Street, and long before he came up with the noble Tim Tam, Morpeth was already a thriving inland port town.

In fact, there are stories that in Morpeth’s heyday, you could board a non-stop ship back to Portsmouth.

By 1832, the regular Newcastle steamship service was bringing huge cargos of much-needed resources to the colonies and making Morpeth a pivotal point in growth and expansion. 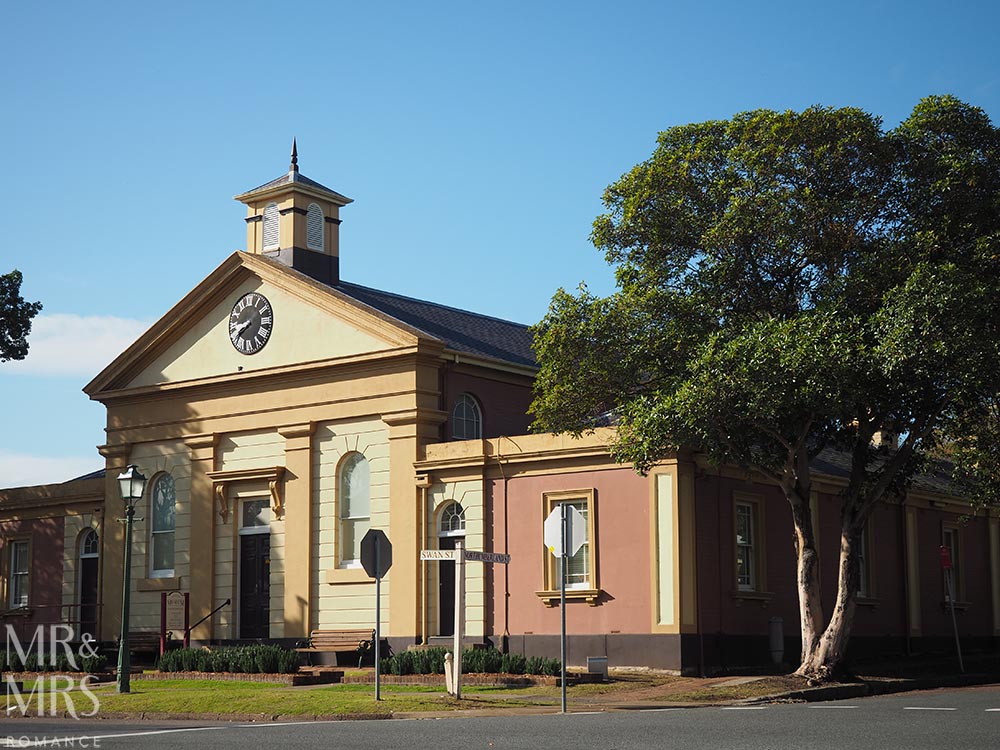 From the seaport in Newcastle, 26km away, goods came all the way up to Queen’s Quay in Morpeth – the furthest navigable point of the Hunter River.

1821 – land is granted to Lieutenant Edward Charles Close, who develops the river port
1831 – first paddle steamer (the Sophia Jane) reaches the port at Morpeth
1832-1890 – regular steamer service runs from Newcastle
1833 – road to Maitland built with convict labour is finished
1834 – area known as Green Hills is renamed Morpeth
1862 – William Arnott and his brother David set up their bakery on Swan St
1840s – Caleb Soul (as in Soul Pattinson) comes to Morpeth to manage a pharmacy on Swan St
1889 – rail link between Newcastle and Sydney is completed, effectively destroying the river trade and the fortunes of Morpeth
1898 – the Morpeth Bridge is opened, completing the town’s existence as a thoroughfare but connecting it to nearby neighbourhoods to the north
1980s – Morpeth finally re-emerges as a tourist destination 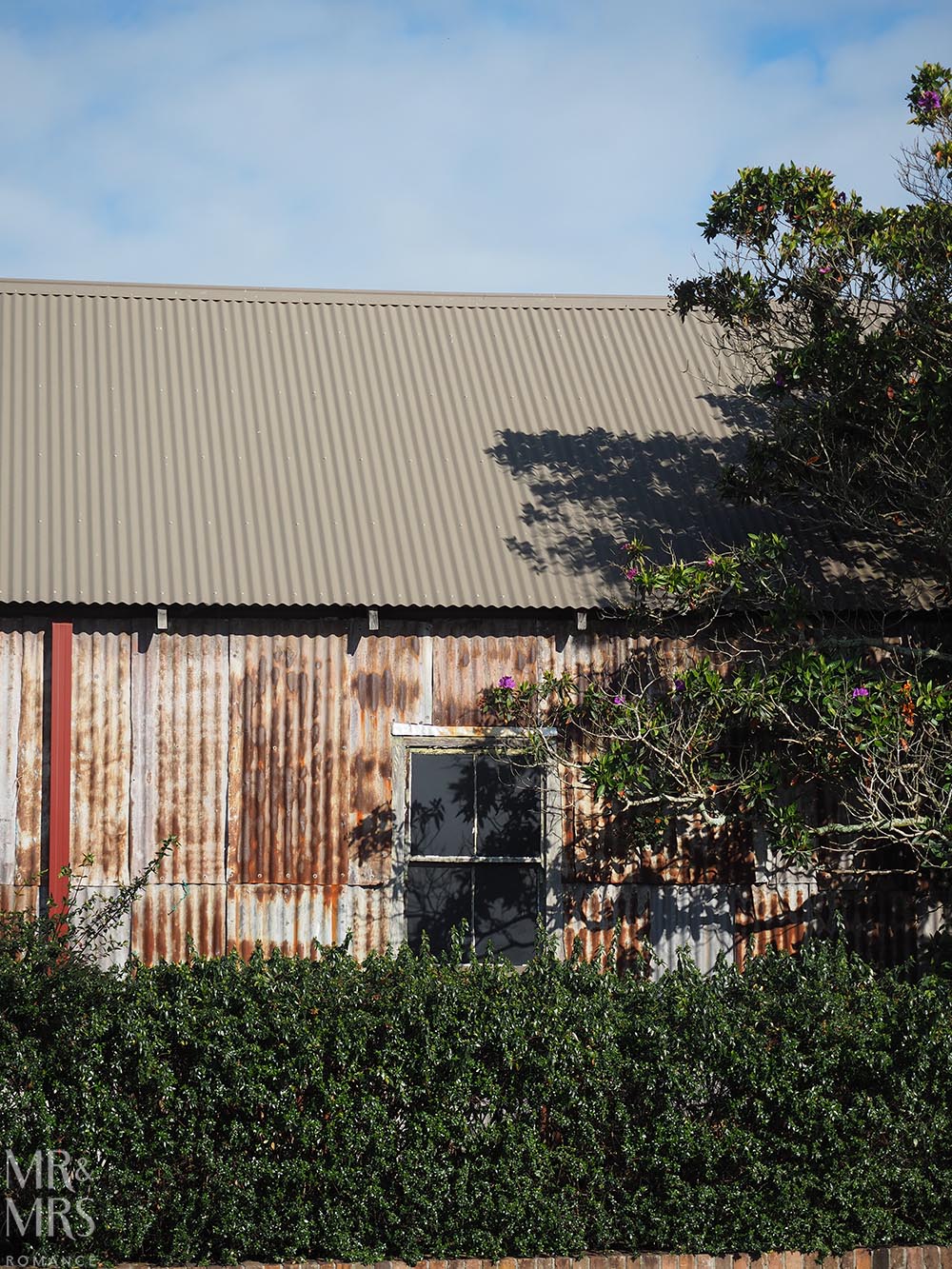 What is there to do in Morpeth?

Simply walking along Swan Street – the main road of Morpeth – takes you back to the bygone era that saw this town boom.

Grand Georgian and Victorian sandstone buildings line both sides of the street down to the riverbank, and the Morpeth Bridge, creaking and rattling under modern traffic tells you of more history to this town.

The bridge is in fact the oldest of only three remaining timber truss road bridges in the country. 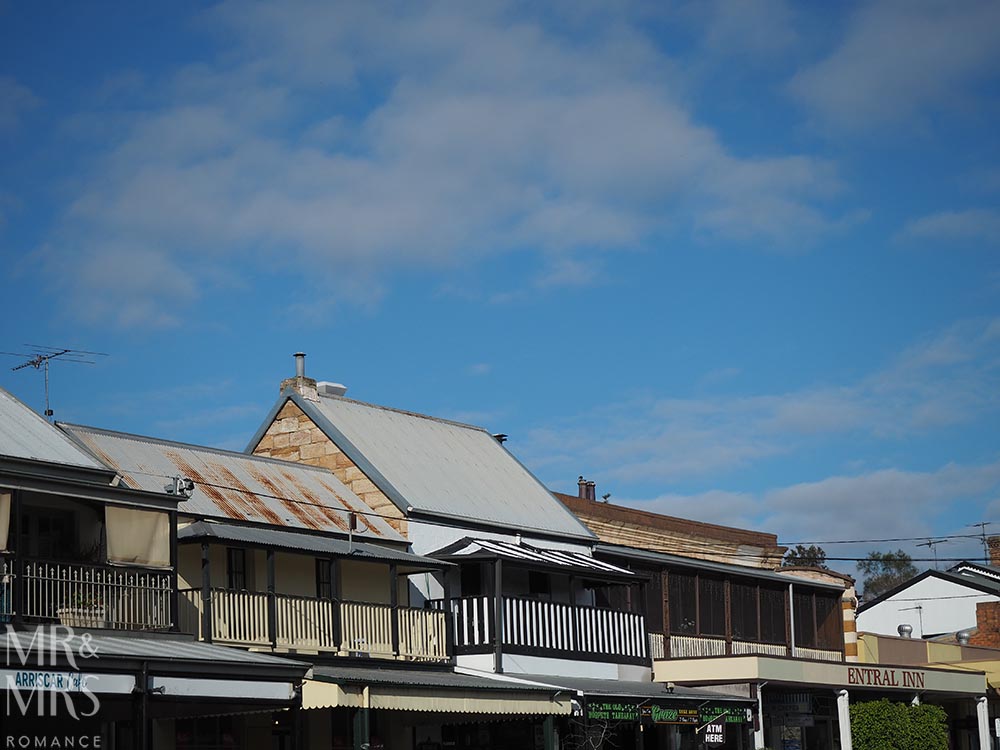 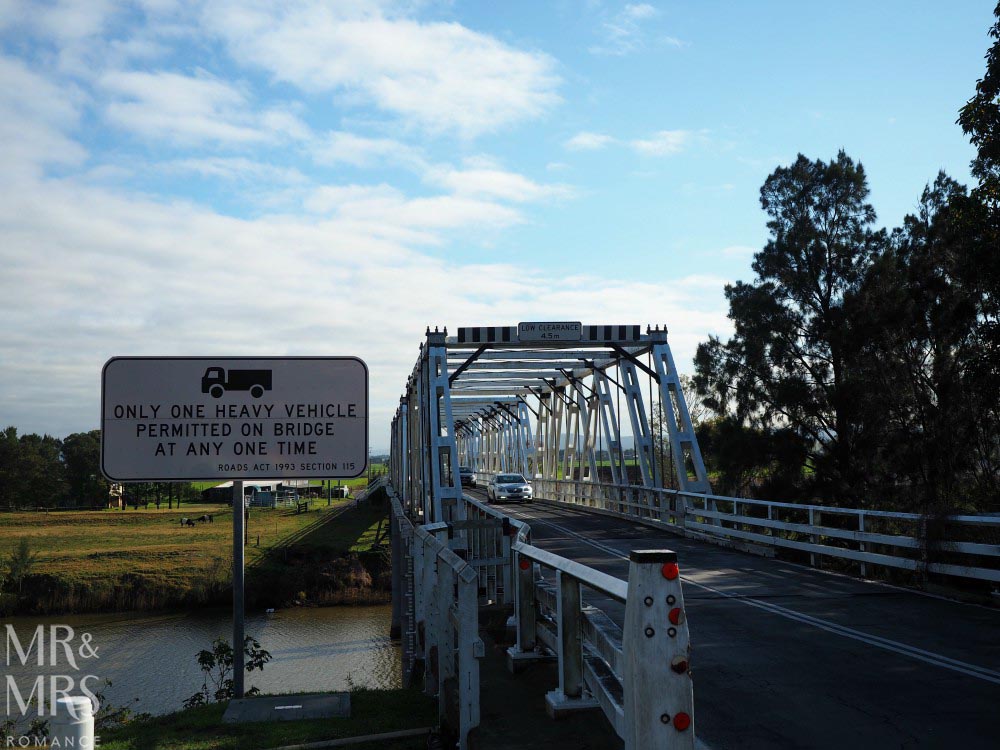 Probably the most famous thing about Morpeth that still remains today is the Arnott’s bakery – known as Morpeth Sourdough This beautiful old sandstone building, right on the river, is where William’s great great great grandson Stephen Arnott still bakes from today.

You can buy – among other delicious baked goods – sourdough bread here and the museum tells the story of how Arnott’s came to be the most recognisable biscuit brand in the country. 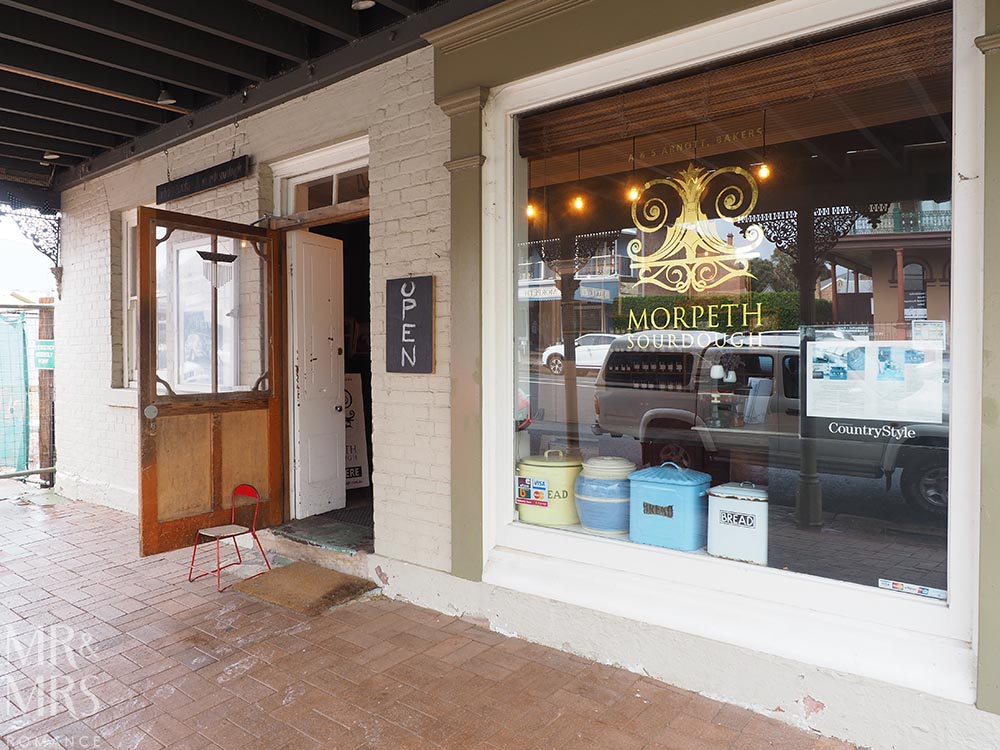 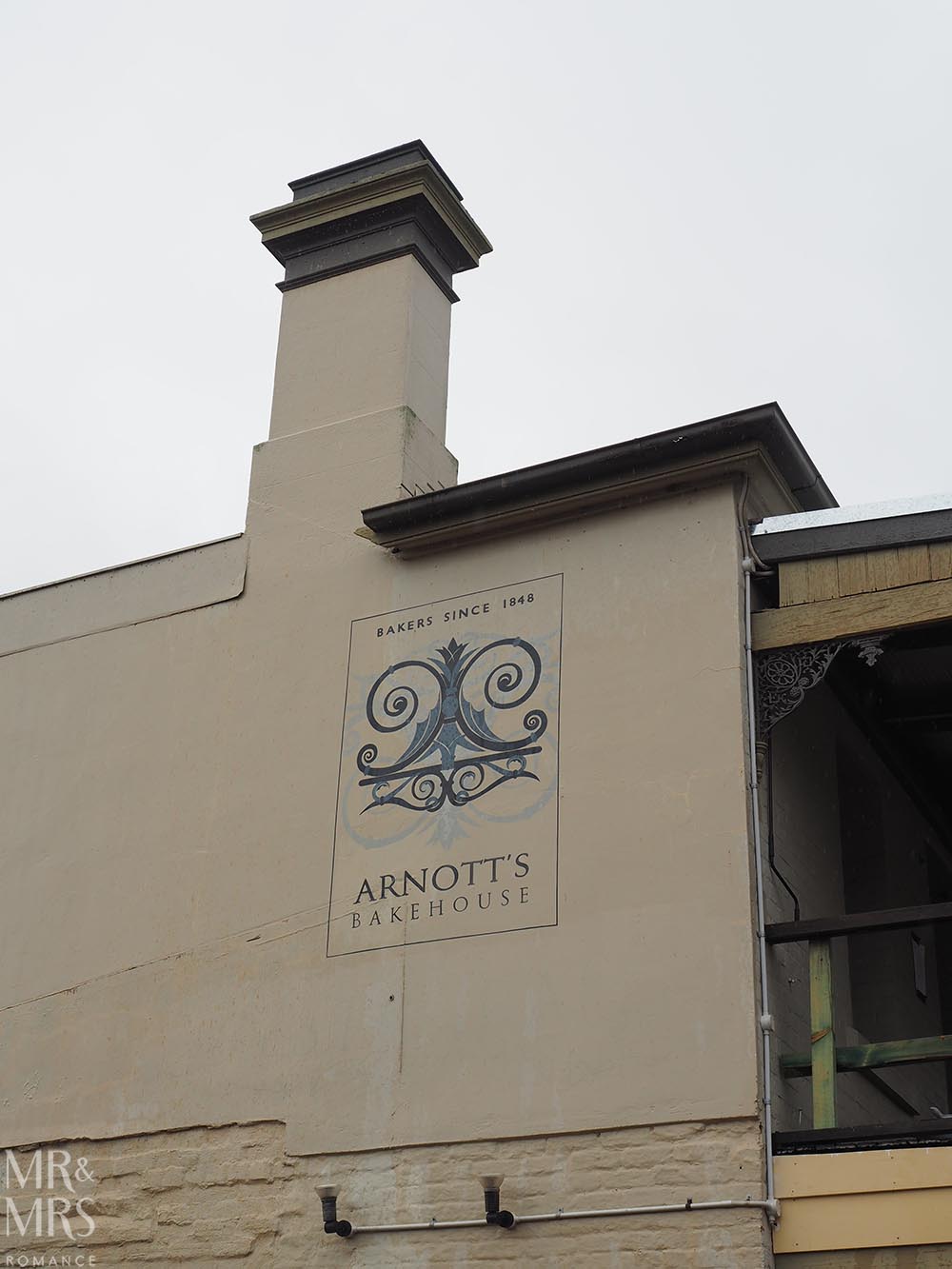 One of William Arnott’s contemporaries also started their fortune in Morpeth. Caleb Soul of the Soul Patterson Pharmacy empire came to Morpeth in 1863 to run a chemist’s on Swan Street. It’s also said that Caleb was also making the strongest rum in the colony – for medicinal purposes of course!

His house – now the Bronte Boutique Hotel – is a wonderful example of early Victorian Australian architecture on the corner of Swan and Berkley streets. 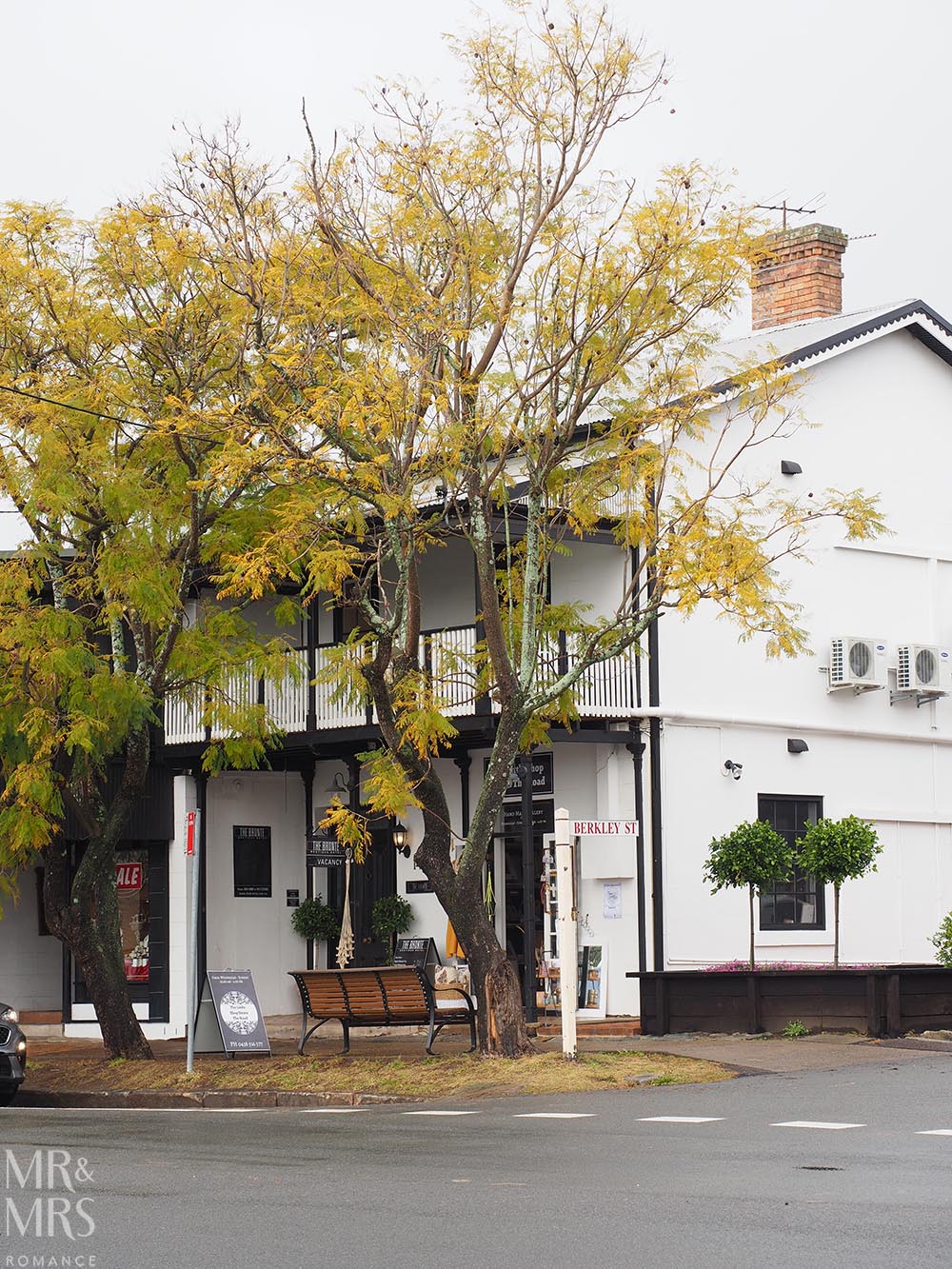 Where to stay in Morpeth

There are a few places to stay in Morpeth, but if you want to be right in the centre of the village, the Bronte Boutique Hotel is perfect. This historic building was, as we mentioned, once the home of Caleb Soul of Soul Patterson Pharmacies. It has an old-world feel without feeling stuffy or dull.

Large, comfortable rooms with all the facilities you’d expect, plus one of the best breakfasts you’ll have, served on the first floor balcony overlooking Swan Street.

Check out our full review and video walkthrough of the Bronte Boutique Hotel here. 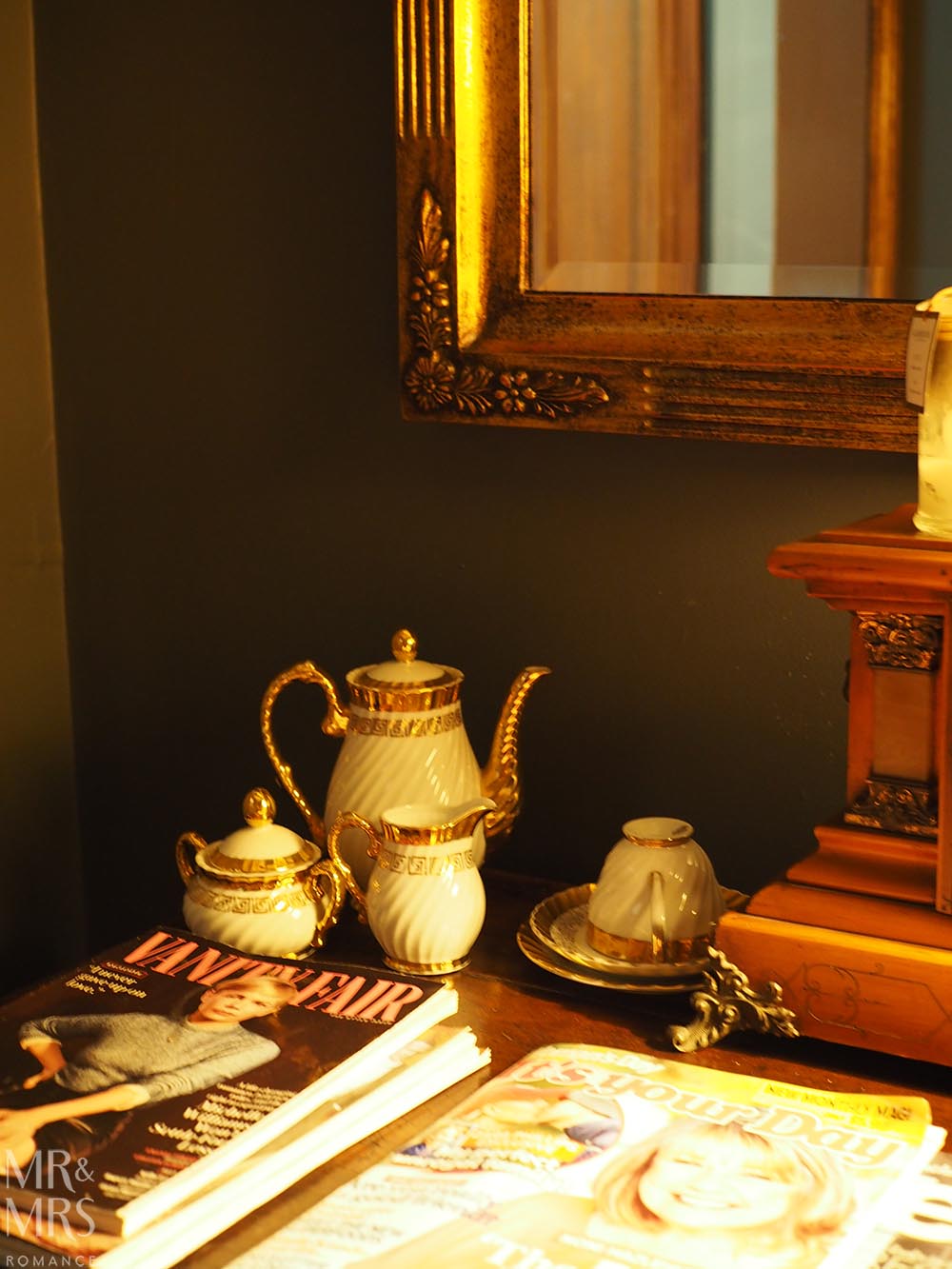 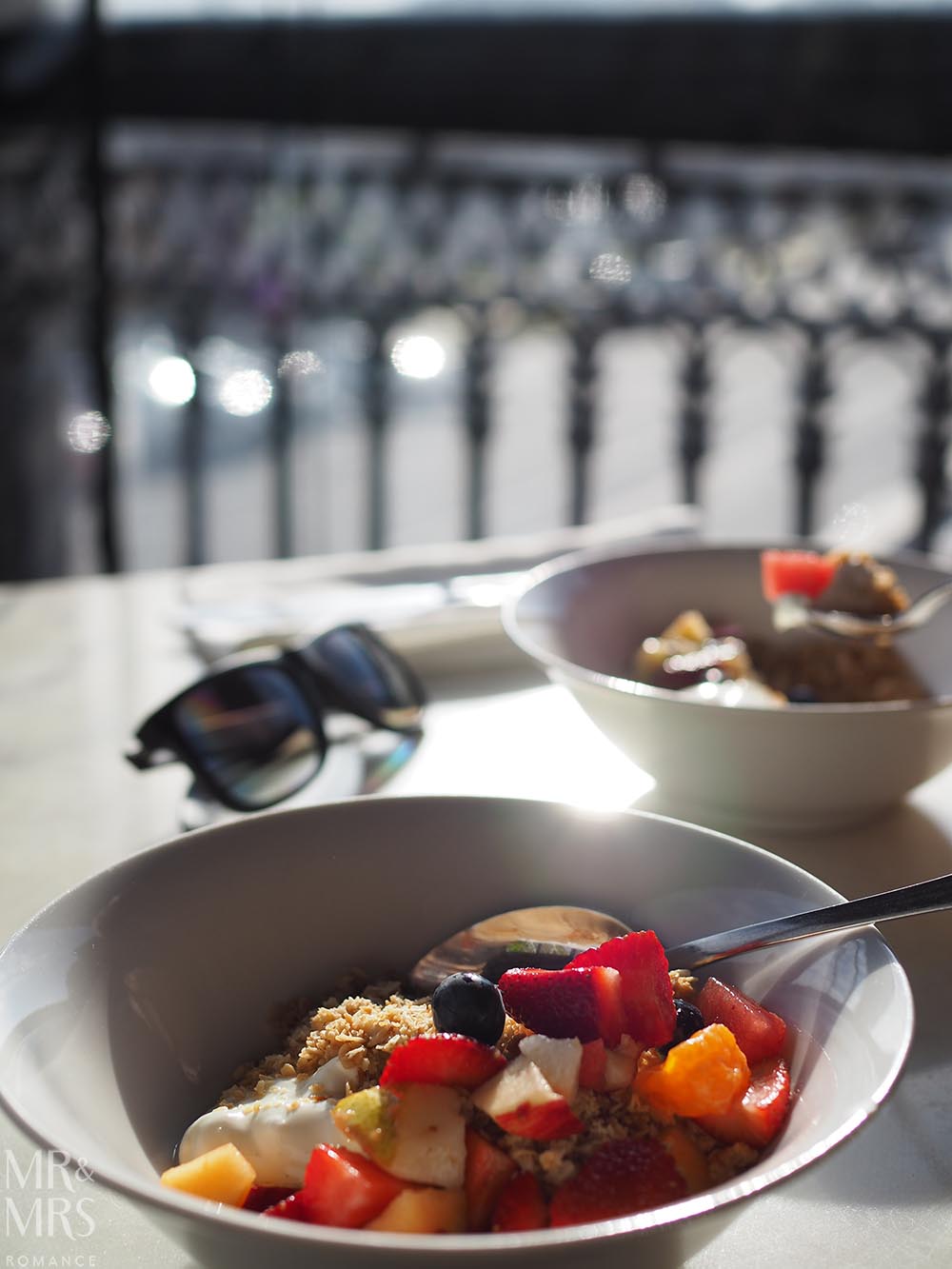 Swan Street has plenty of little cafes and tearooms to check out, all offering good-quality coffee and some with seating on the street.

There’s also food on offer at the two pubs, which are definitely worth a visit. One of which, the Commercial, also has its own brewery turning out a very tasty pint. 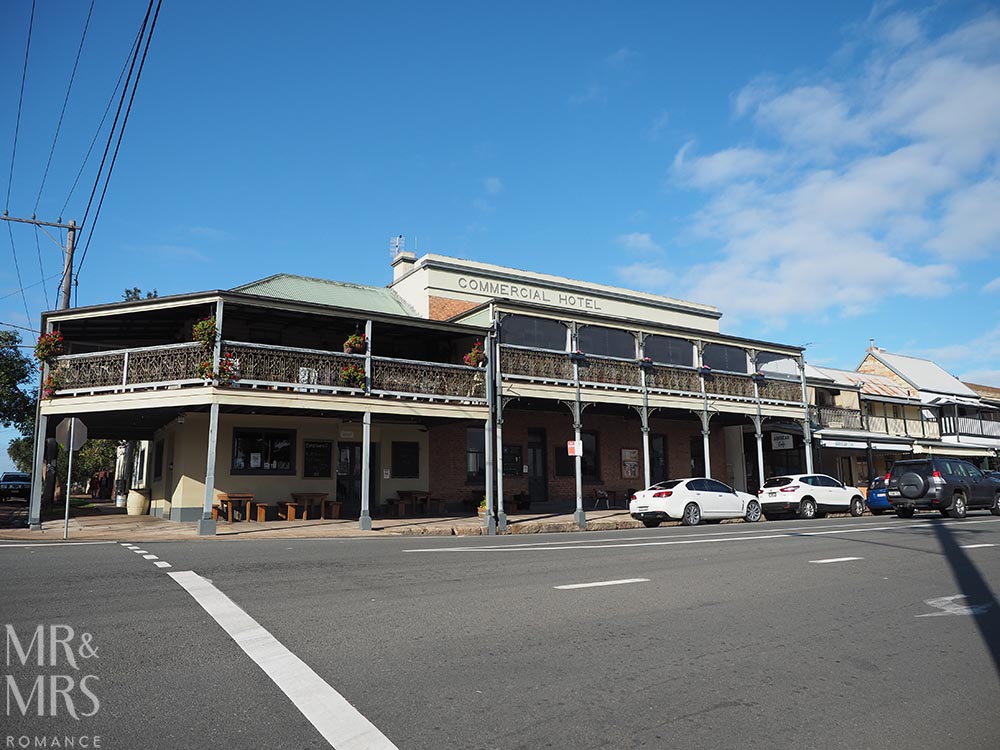 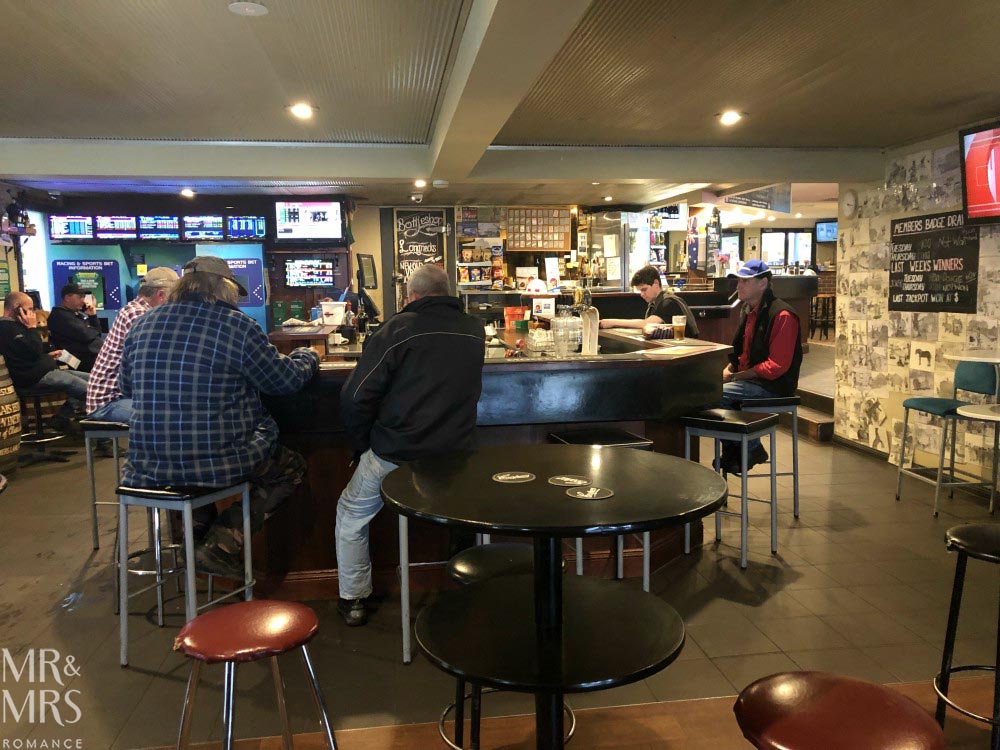 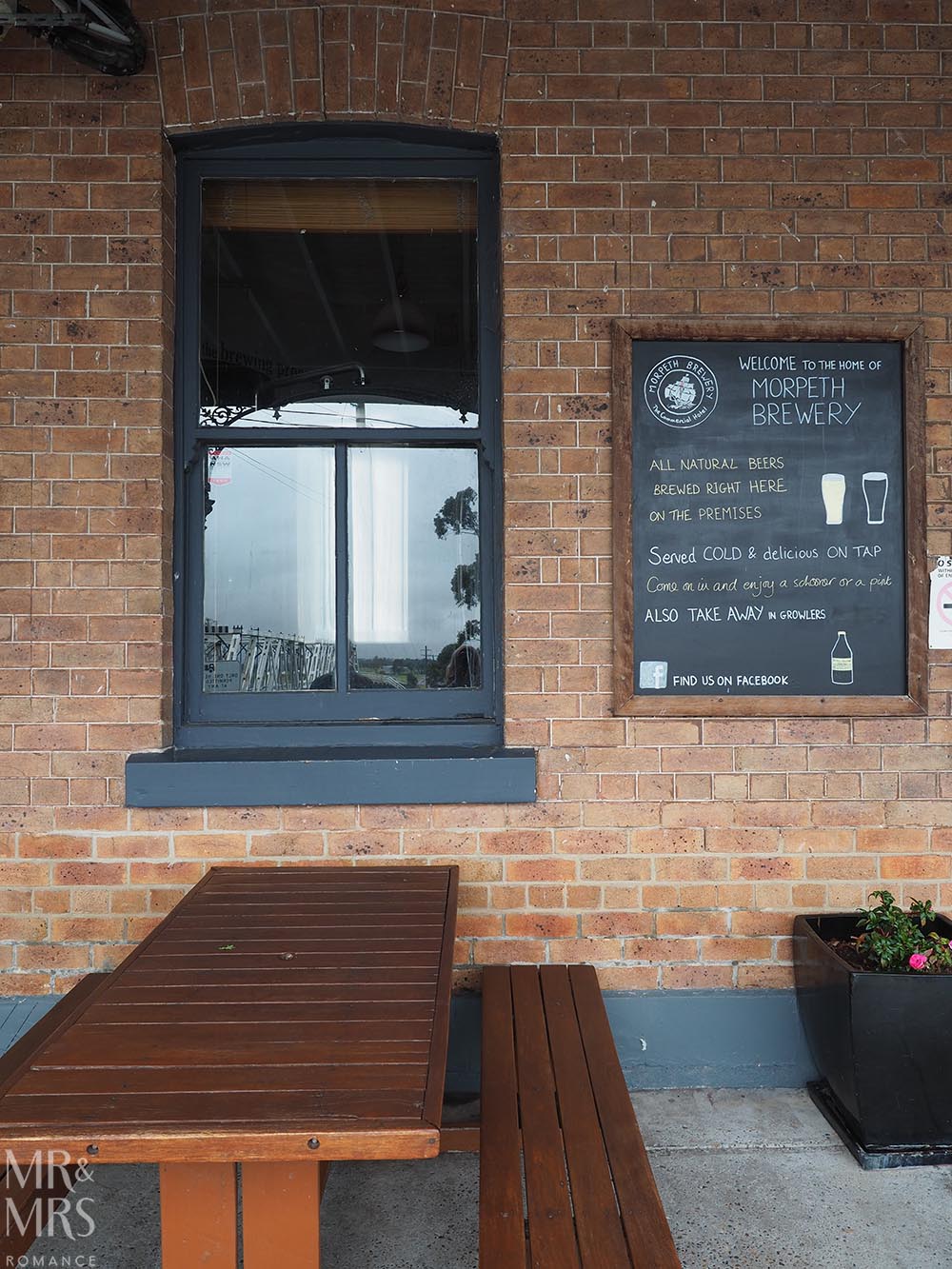 Of course, there’s also the Sourdough Bakery too, but other than a couple of takeaway joints, there aren’t really any dinner options in Morpeth at the moment.

However, Maitland is just a five-minute drive up the road, where there’s a wealth of excellent dining options. 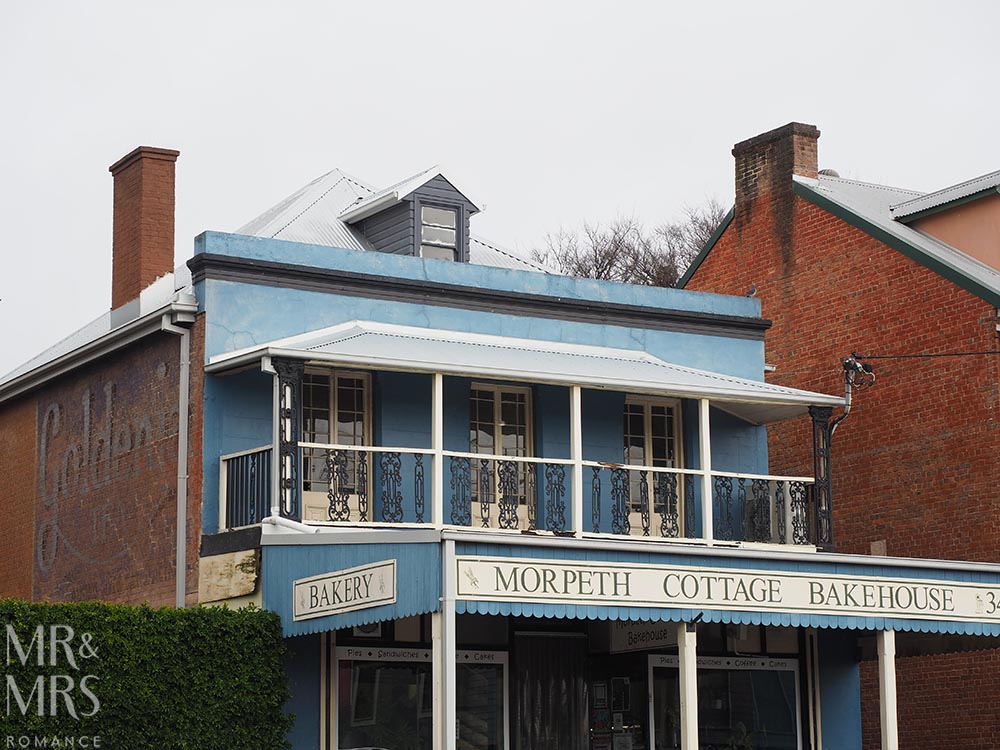 One of the things that drew visitors back to Morpeth in the ‘80s was its gift shops and antiques. In fact the Morpeth Antique Centre is one of the most interesting (and beautifully organised) shops you’ll find.

A couple of doors down from the Bronte Hotel is a little arcade full of shops worth a look. And if you’re after something for your sweet tooth to nibble on, visit Miss Lily’s Lollies, which sells every conceivable sweet – and some inconceivable ones too! 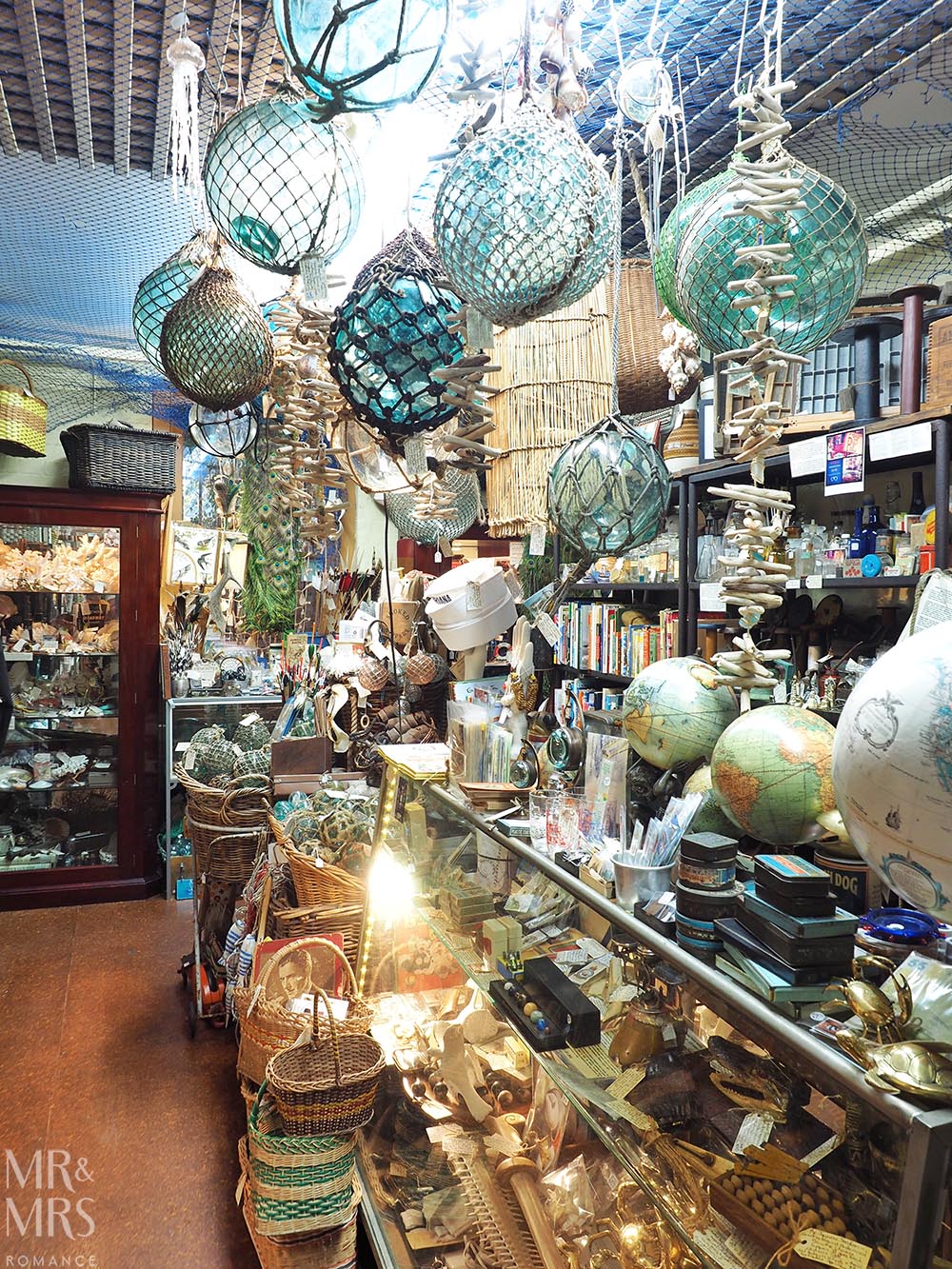 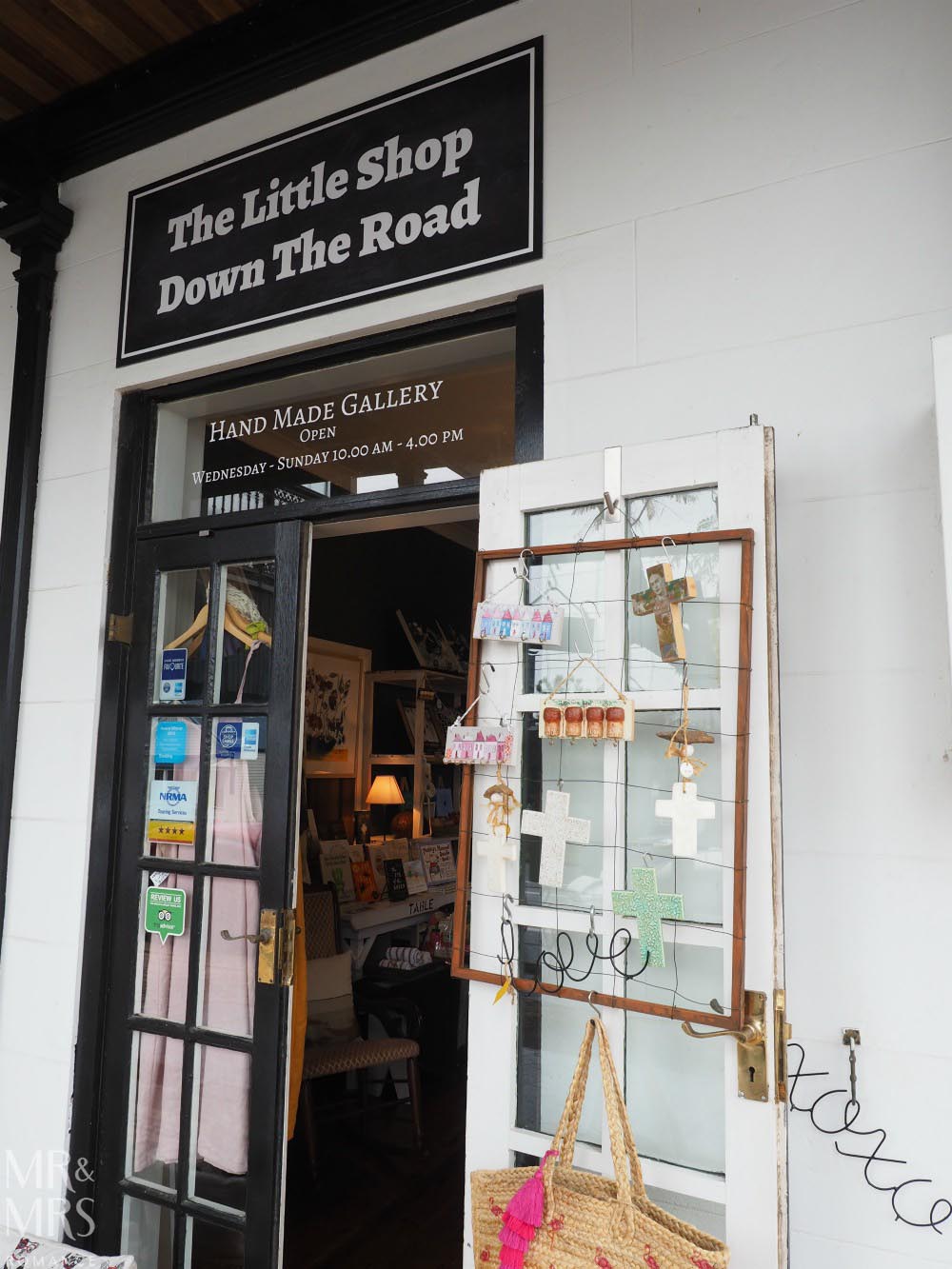 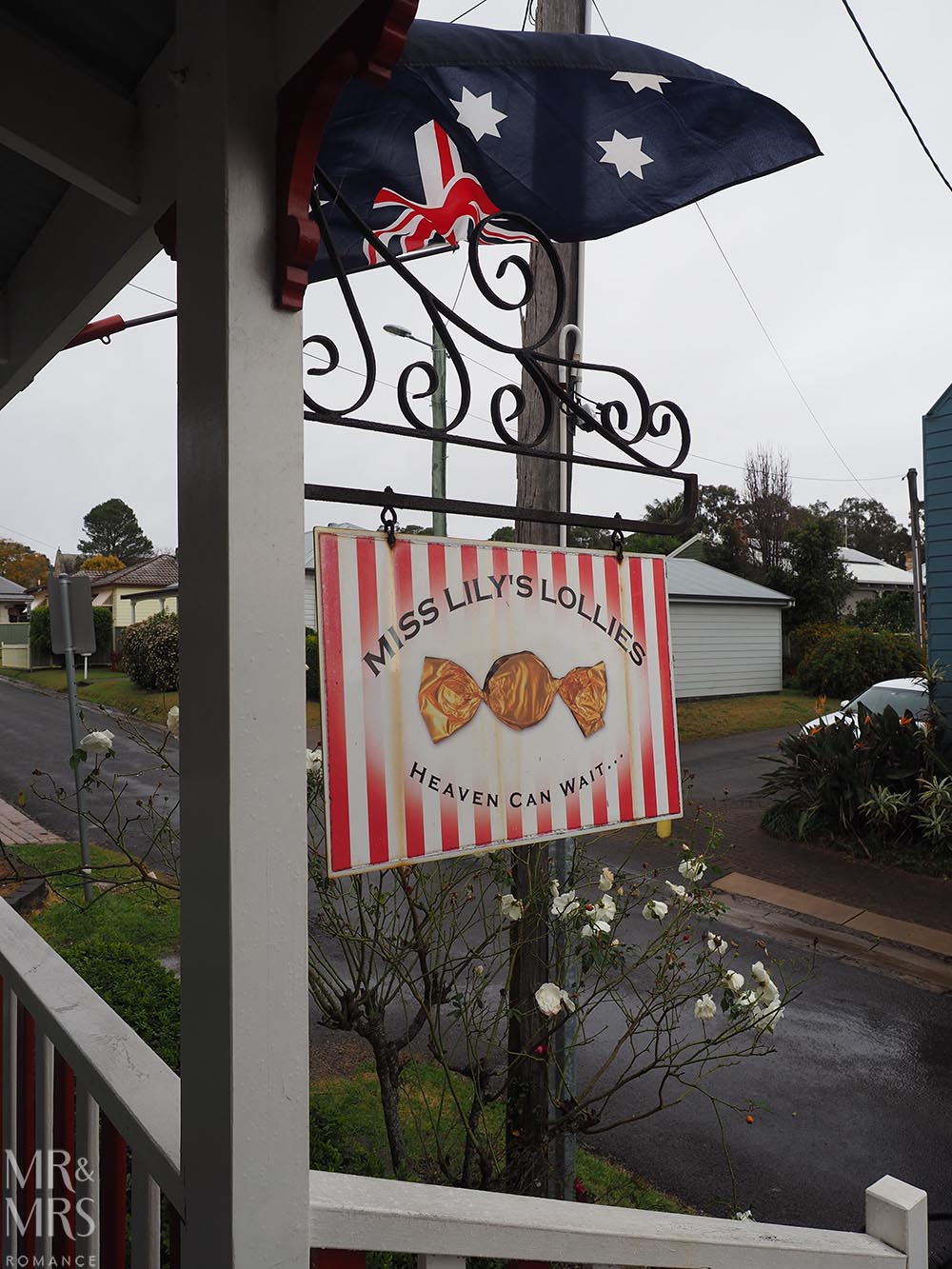 Only five minutes down the road is Maitland, which has all the commodities of a large town. It also has some of the best restaurants and bars we’ve found in regional Australia.

Check out our quick list of where to eat in Maitland here.

If Maitland’s still not big enough for you, drive another 30 minutes east and you’re in Newcastle.

Historically a port town, Newcastle has worked hard in recent years to become a lot more than that. These days its waterfront and city centre are well worth a visit. 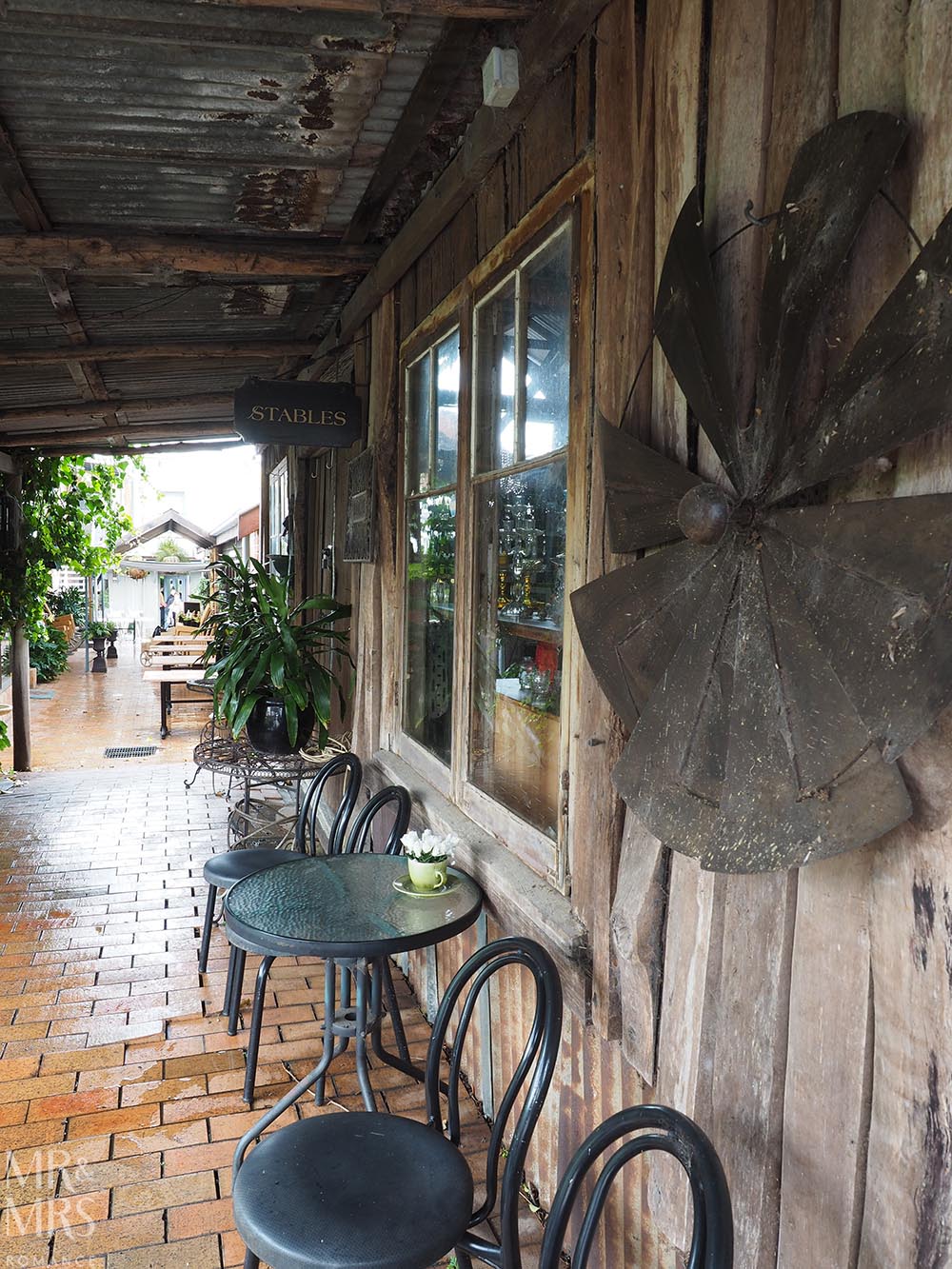 And of course, 30 minutes south of Morpeth is the Hunter Valley and the centre of wine in New South Wales. Trying a few wines here is a must, but if you’re not sure where to go, here’s a list of wineries to check out in the Hunter recommended by a local wine-maker.

There’s so much out there beyond the big cities and tourist hubs that makes Australia an incredible place to explore. Little towns and villages, whose thriving communities give a better perspective of what this Land Down Under is really about, deserve our attention.

Morpeth, NSW is a great example of that. 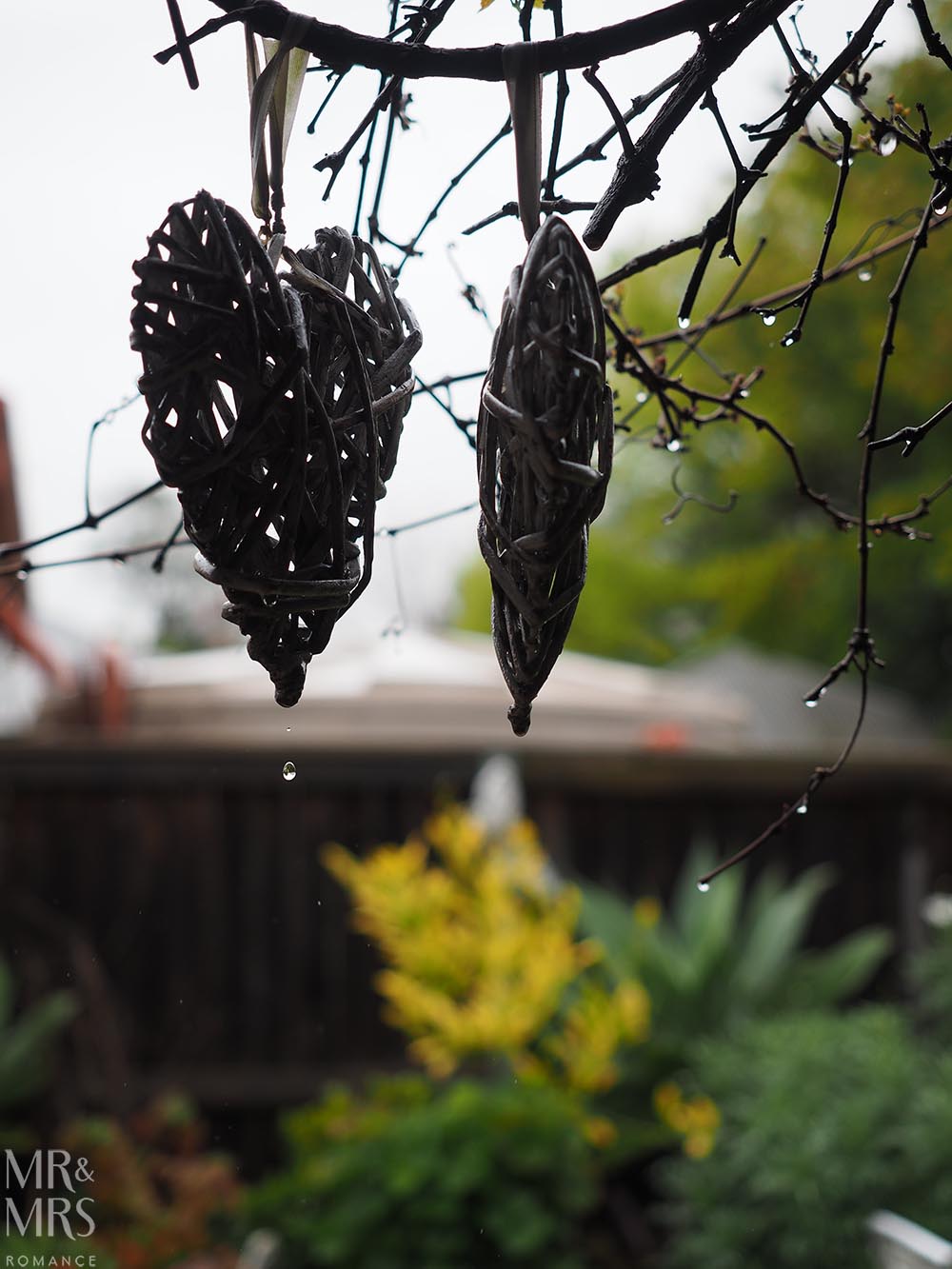 We stayed at the Bronte Guest House, Morpeth as guests fo Destination NSW.

5 wine trends to watch out for

Nothing stays still for very long, even in something as well-established as the wine industry. Here are five different wine trends that we have…