Morpeth, NSW – 30 minutes from the Hunter Valley wineries – is a little country village with a big-town history. Opposite the first ever Arnott’s bakery, the Bronte Boutique Hotel welcomes travellers and roadtrippers to the comfort of its homely manor house – a home that has seen the transformation of colony and fall of empires. 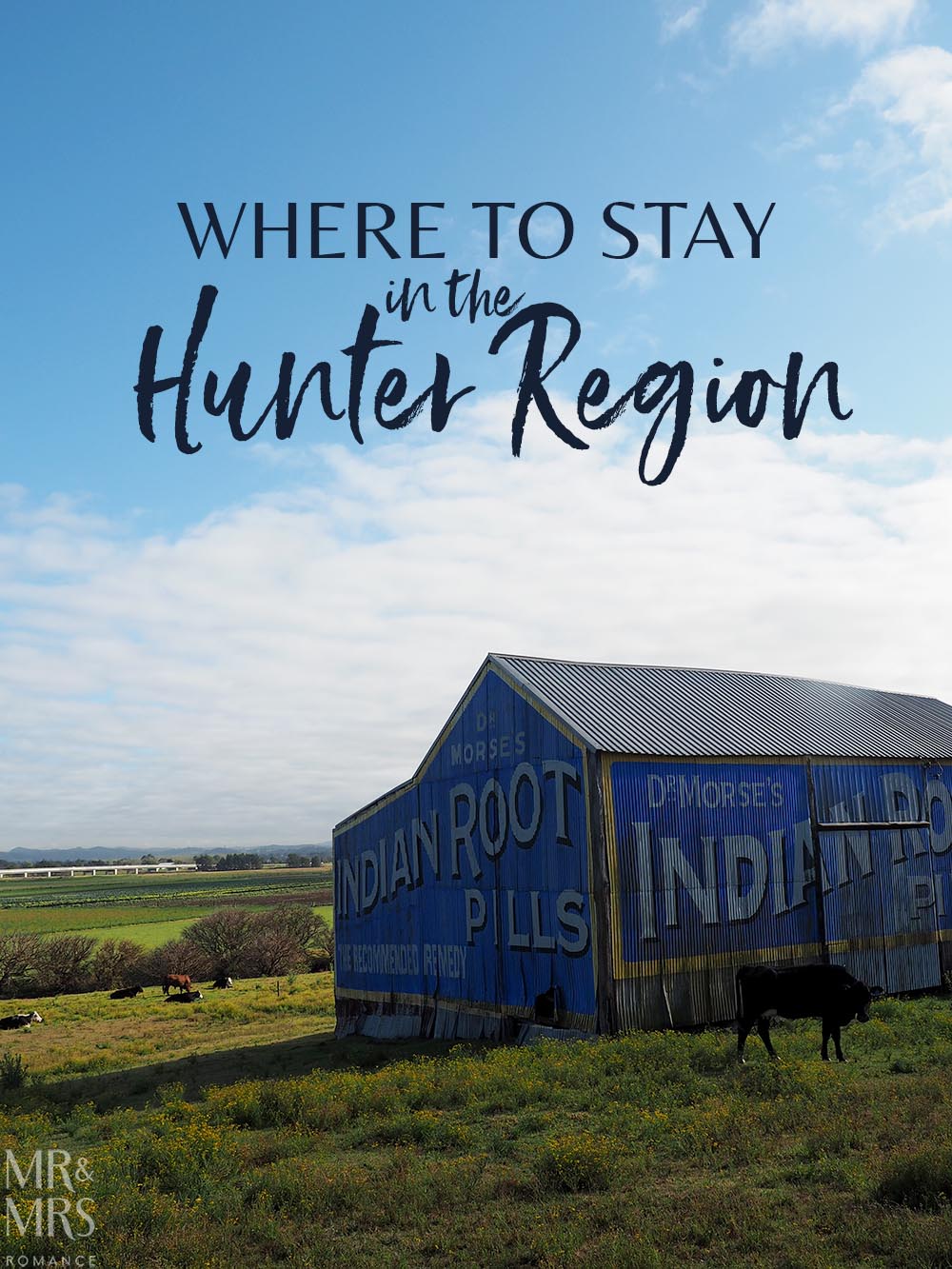 Tucked away behind the trees of Morpeth’s leafy main street is the discreet yet stately door and frontage of the Bronte Boutique Hotel. Built early on in the Victorian era and close enough to the Hunter River to see its banks from its balcony, the hotel would have seen many changes to Morpeth and to Australia over the years.

Check out our quick video walkthrough of The Bronte Boutique Hotel and Morpeth here:

Once the main inland port town for supplies to the colony, Morpeth grew quickly in the early to mid 1800s. Now, this town – 15 minutes from Maitland and its extraordinary food scene, and 30 minutes to Cessnock and the Hunter Valley – is in the perfect spot for a country getaway.

There’s something about staying in a well-styled historic building that not only feels comfortable and somewhat luxurious, but it also gives you the sense that you’re now part of the building’s history. 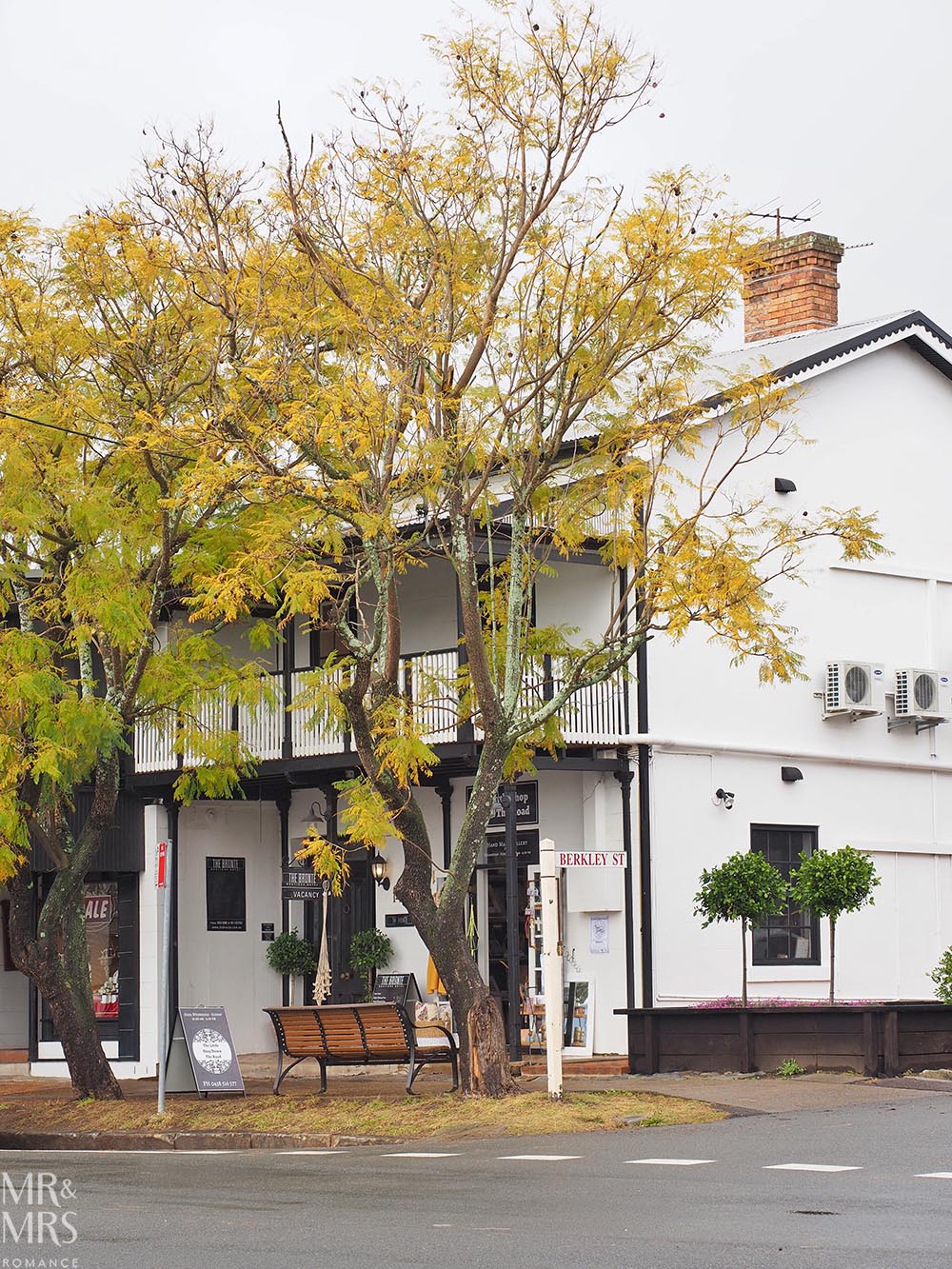 It takes a little while to get used to the combination of décor in the Bronte Boutique Hotel. In an east-west collision of two old empires, this otherwise thoroughly Victorian house has touches of antique Japanese art and objects punctuating the walls and sideboards.

Oddly, rather than clashing, the two distinct styles add a sense of mystery and romance. 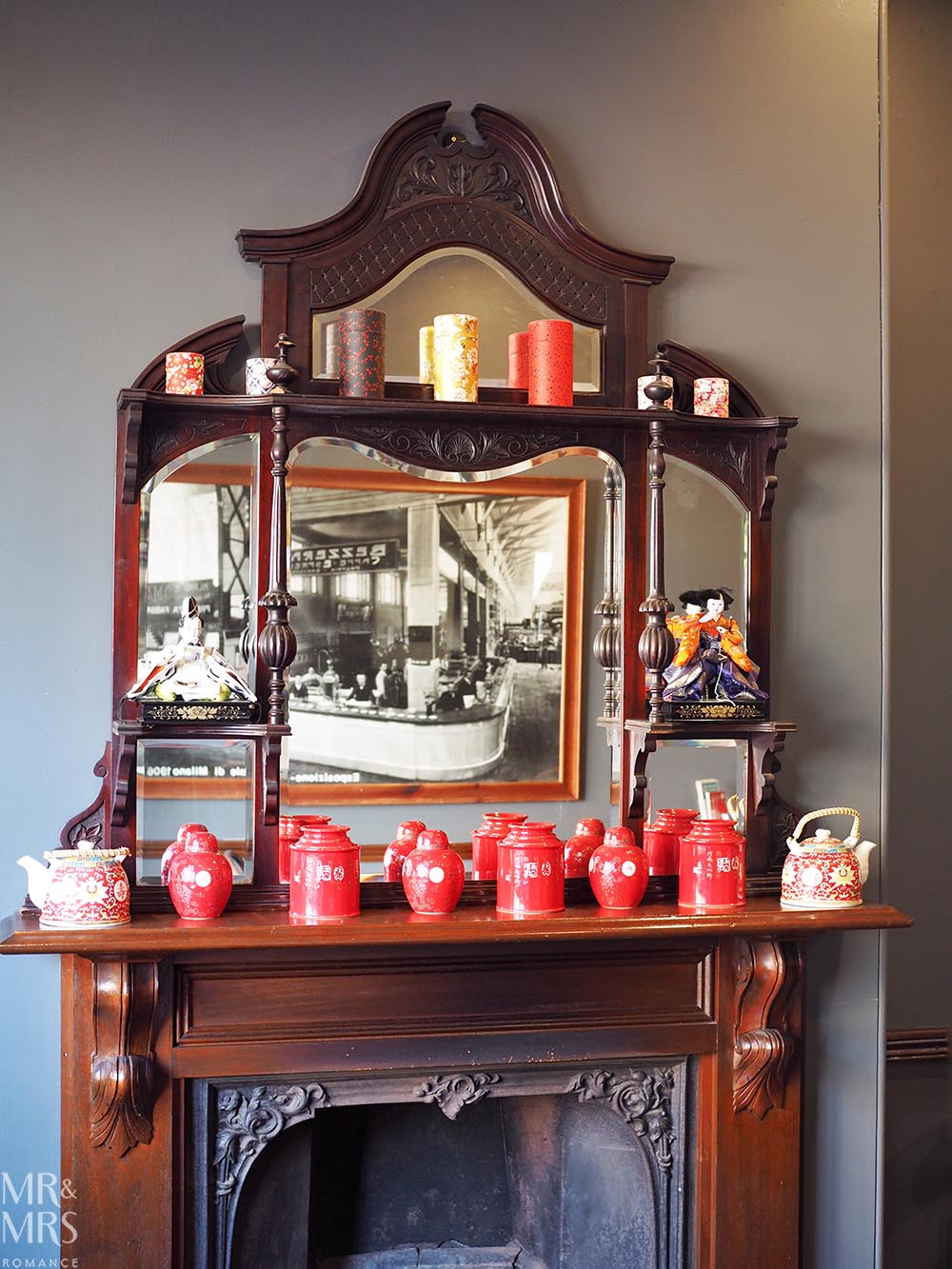 Bedheads are of embroidered silk with Japanese designs and colours, and Oriental ceramicware stands next to carriage clocks near the original wooden staircase, carpet rods and all.

It’s an eclectic combination, but one that seems to work. Perhaps it’s because comes from owner Clint Marquet’s love of Japan. He has spent much of his life there since he was a teenager and has used things from his own personal collection to decorate the Bronte. 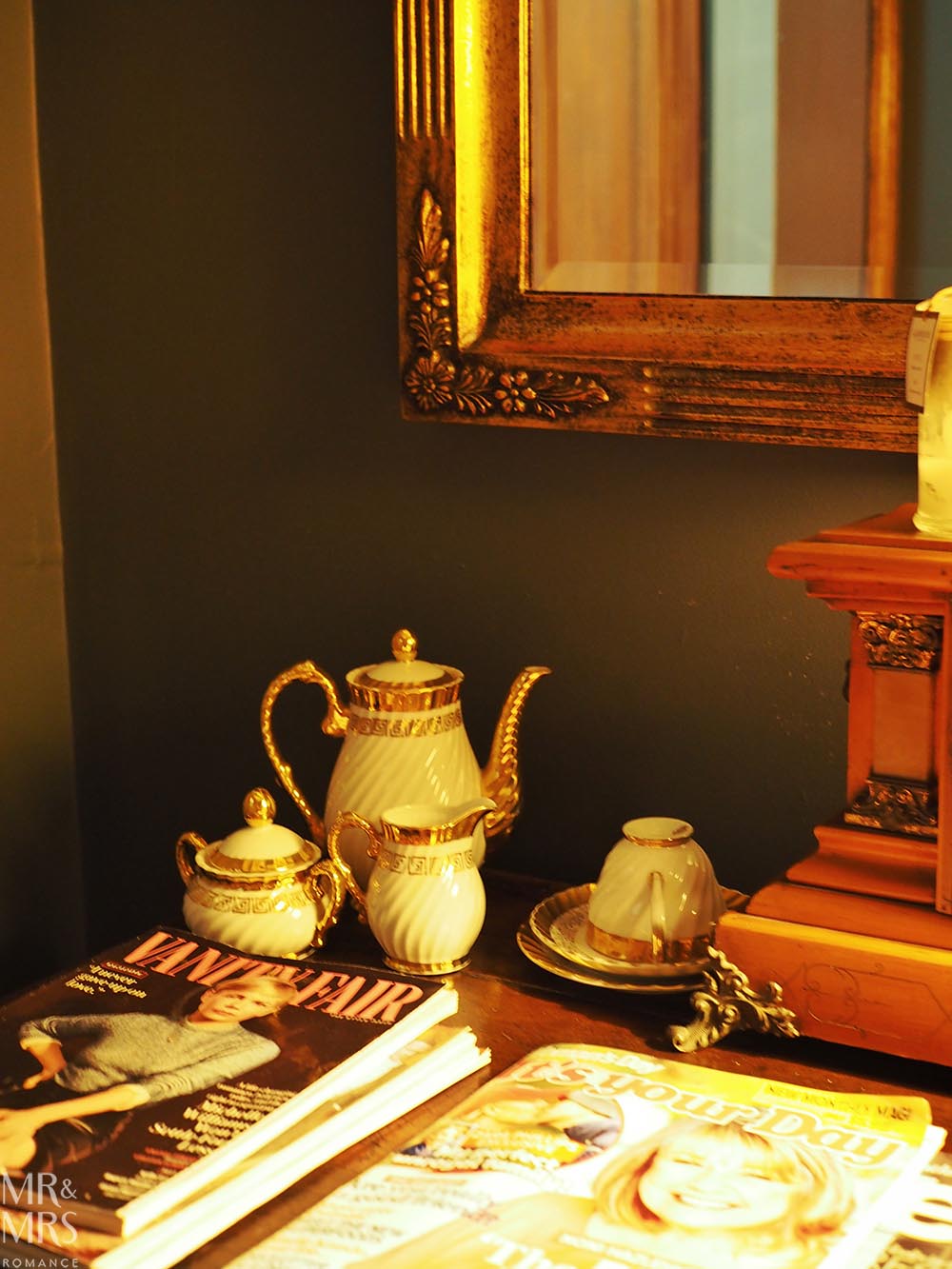 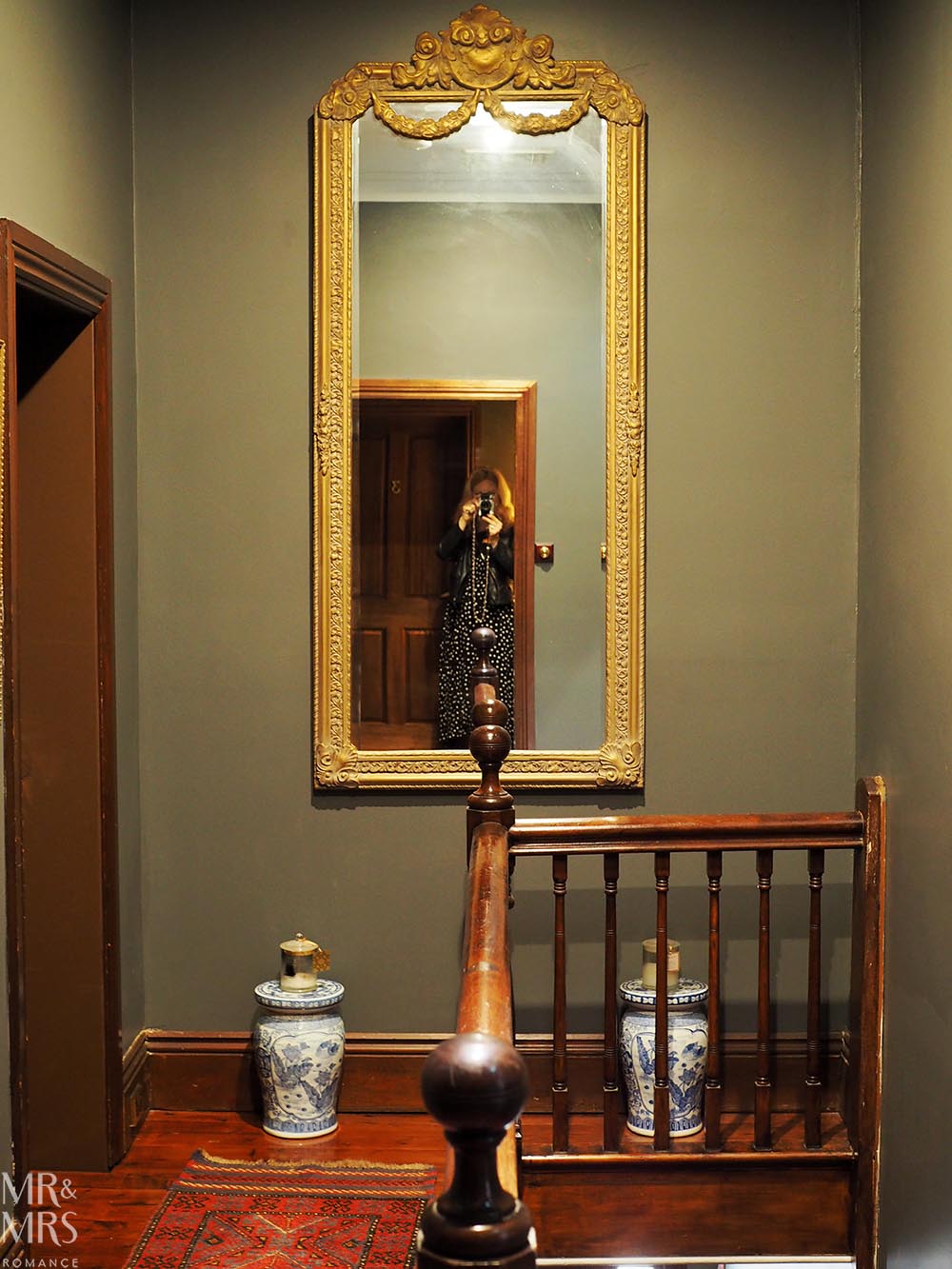 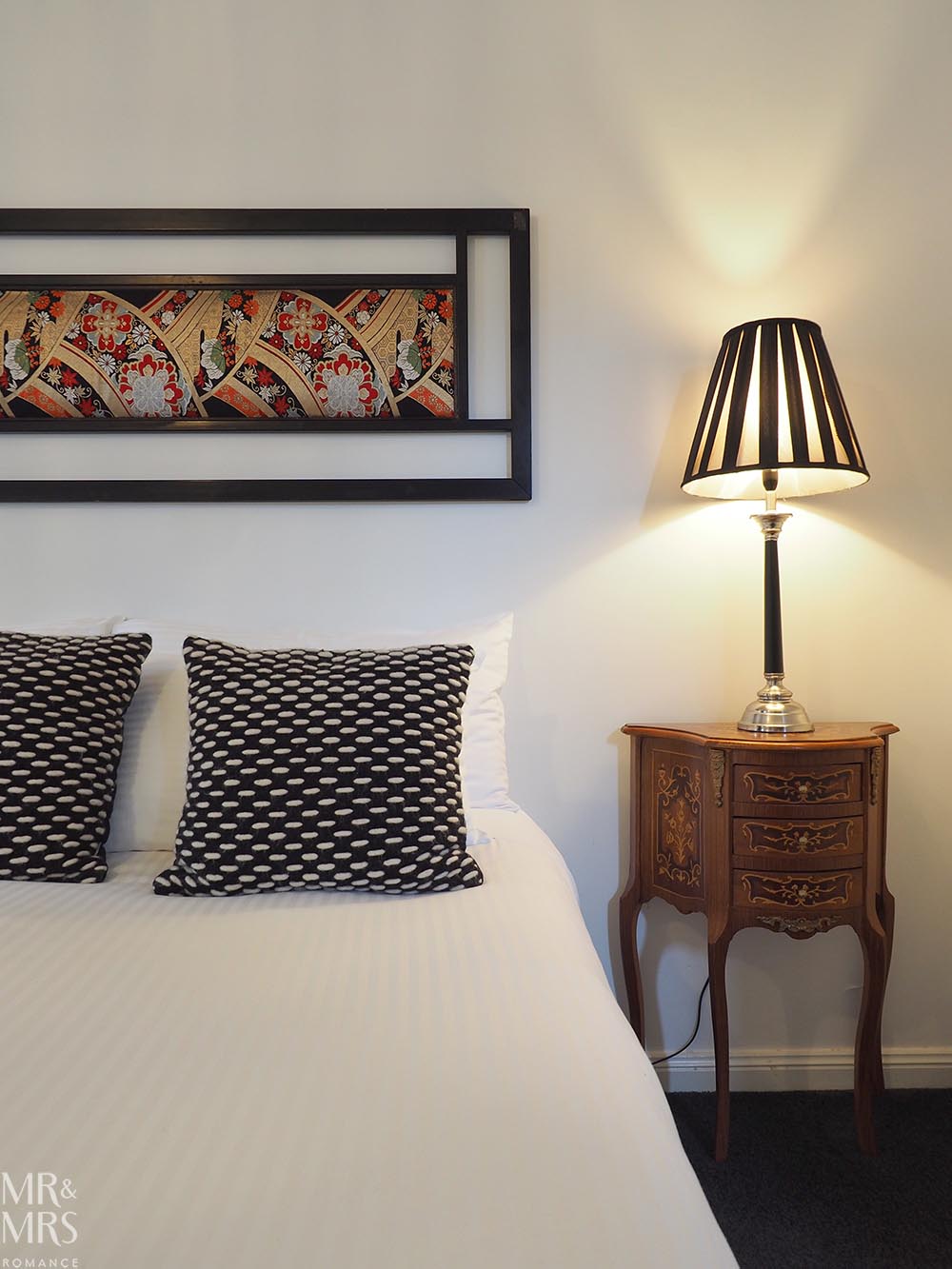 At the moment, there are five rooms at the Bronte Boutique Hotel. Each of them is beautifully appointed with big, comfortable beds, decorative, Victorian-style furniture and spacious bathrooms.

Comfort and elegance have clearly been the key factors in designing these rooms, and the details you find here tell you that you’re in a high-quality hotel that cares for its guests. Free water and snacks, TV, electric blankets, reverse cycle aircon, plenty of powerpoints with USBs, Appelles bathroom products and fluffy robes all come with the room. 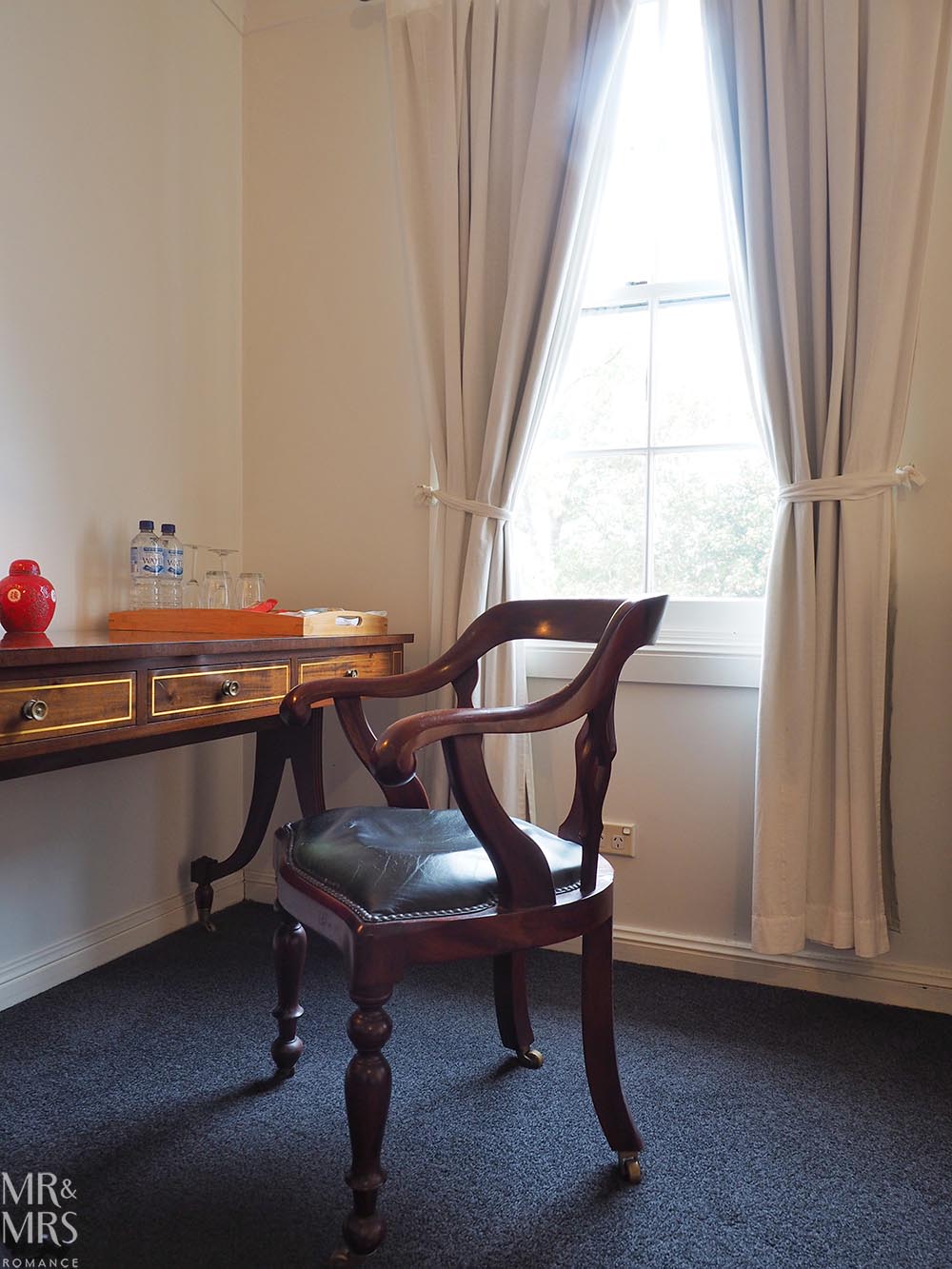 Rooms do not have fridges or safes however.

Each of the rooms is named after eminent personalities and household names who either made Morpeth great or started great things there. The Arnott Suite is a nod to William Arnott, who started as the town baker and went on to forge Arnott’s Biscuits. His bakery is still in the Arnott family and still makes sourdough across the street.

The Soul Suite has the name of the man who built and lived in this house, and who went on to form the Soul Paterson Pharmacy empire. He also reportedly made the strongest rum in the colony!

Ours was Room 3 – the Close Suite and ironically the largest of the rooms. It’s named after Lieutenant Edward Close, who was awarded the land in 1821 for his services. He established the private township that went on to be Morpeth.

The Close Suite is big. It has two large windows in the main room, an ornate chest of drawers, an antique desk and chair, a table/TV stand and two more chairs, and even a cloakroom. And a huge bed of course. 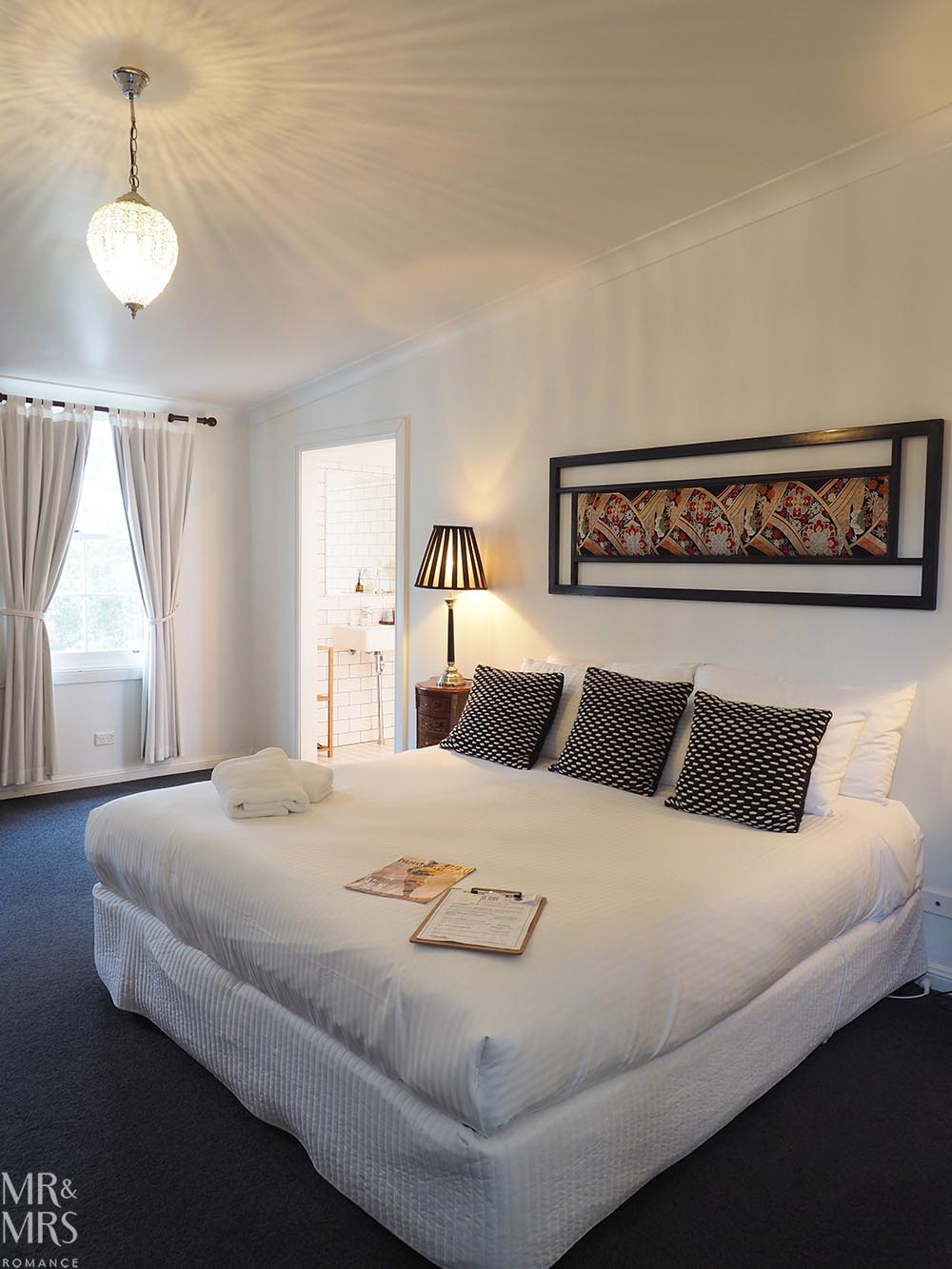 The generous bathroom not only has a beautiful deep-soak bath, but also a double rain shower. The gleaming white tiles, lofted ceiling and large mullioned sash window makes this a wonderfully light bathroom.

Our only reservation with the bathroom – and the whole room really – is that there’s no door to the bathroom.

As we’re a ‘closed-door’ kind of couple, it made using the personal amenities a little awkward and seems a strange detail to miss out on when everything else is so well catered to. Just so you know, we did check the other rooms and they all had bathroom doors. 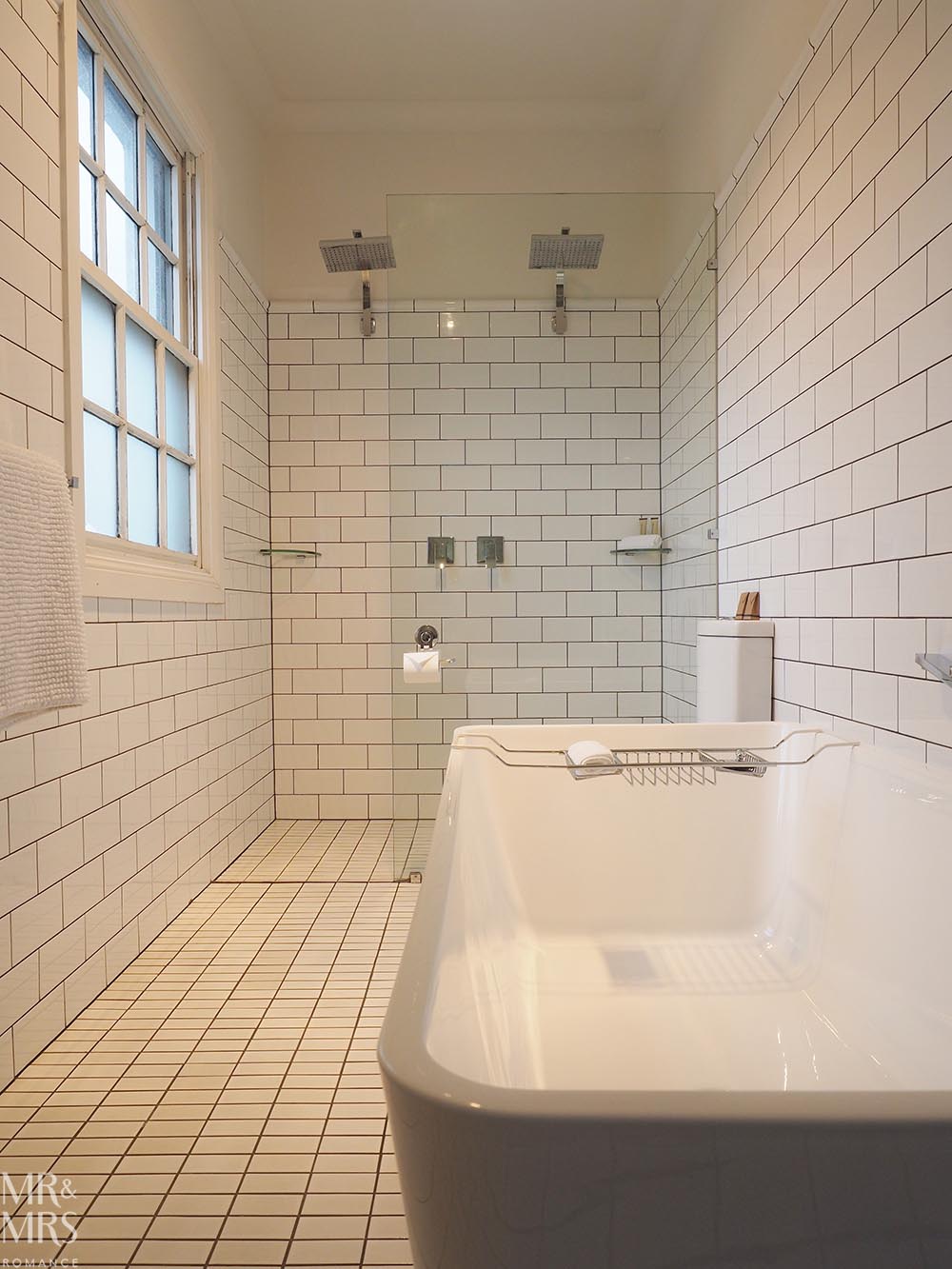 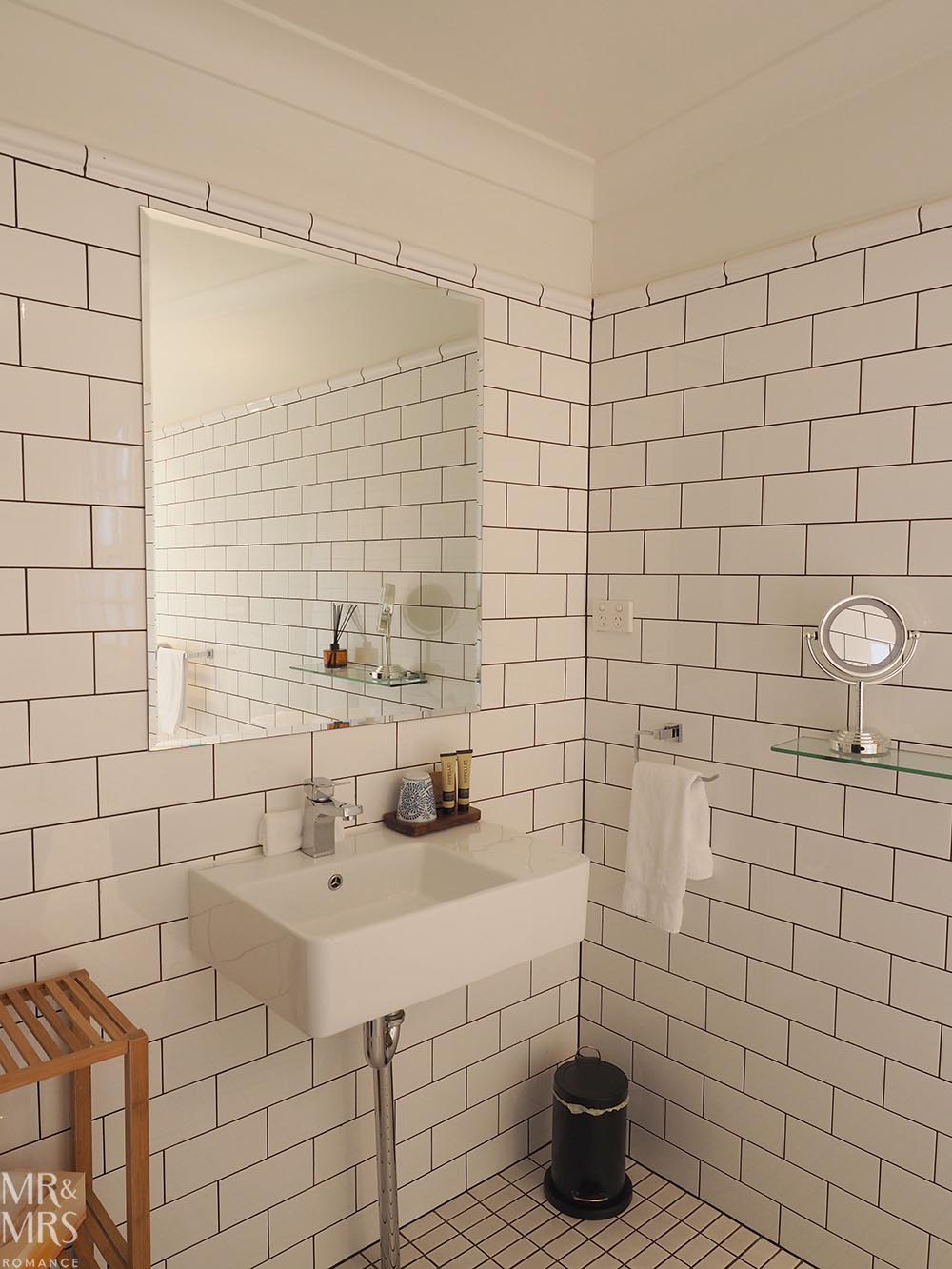 Down the corridor on the first floor, breakfast is taken on the balcony overlooking the town. The aircon unit makes this an all-weather venue. It’s lovely to be able to look out over the main street while you’re enjoying brekky.

There’s a Nespresso machine, which is at your disposal throughout the day, but which really comes into its own now. While you’re waiting for your cooked breakfast, you can help yourself to the delicious home-made granola, fruit & yoghurt. 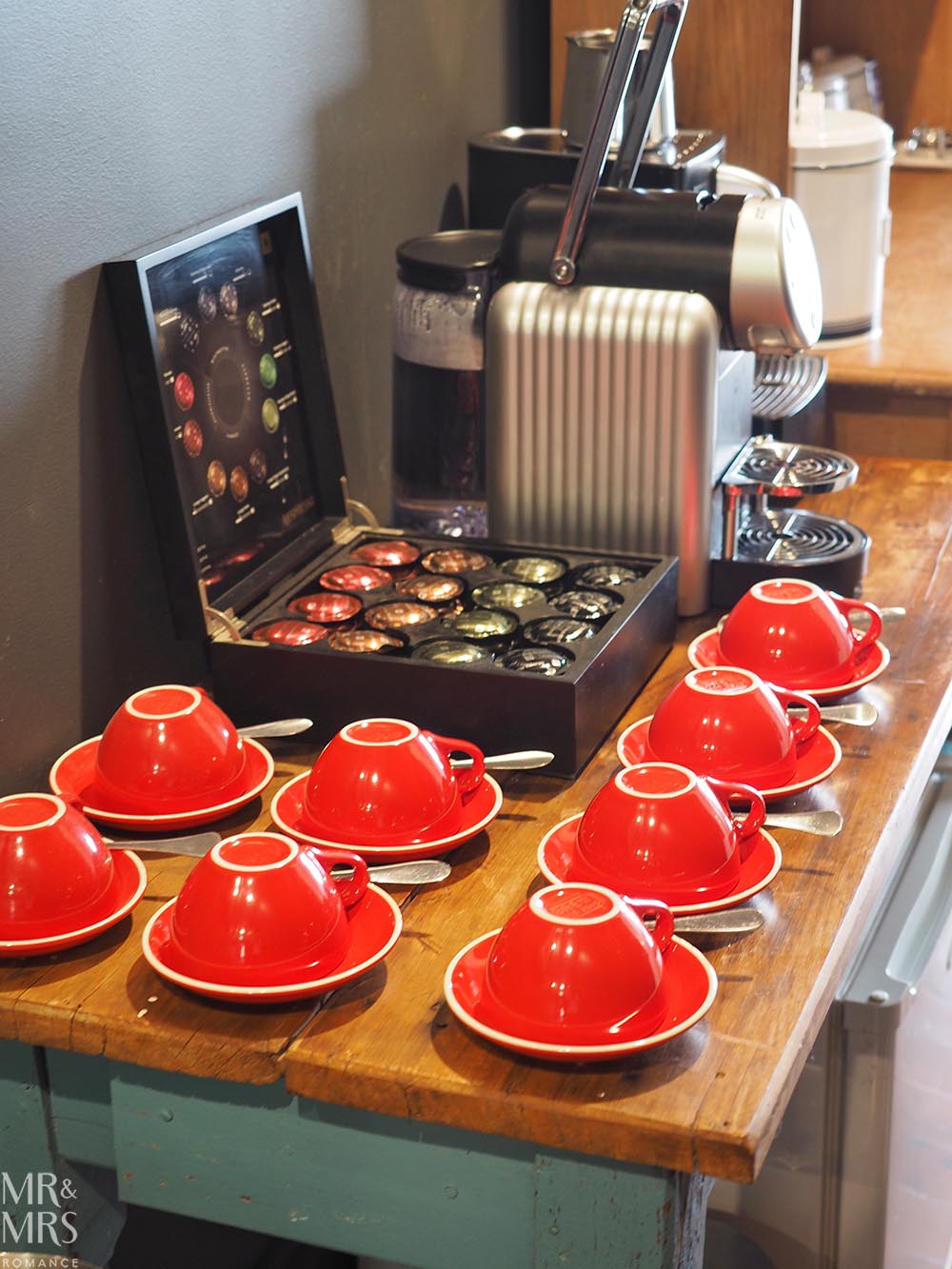 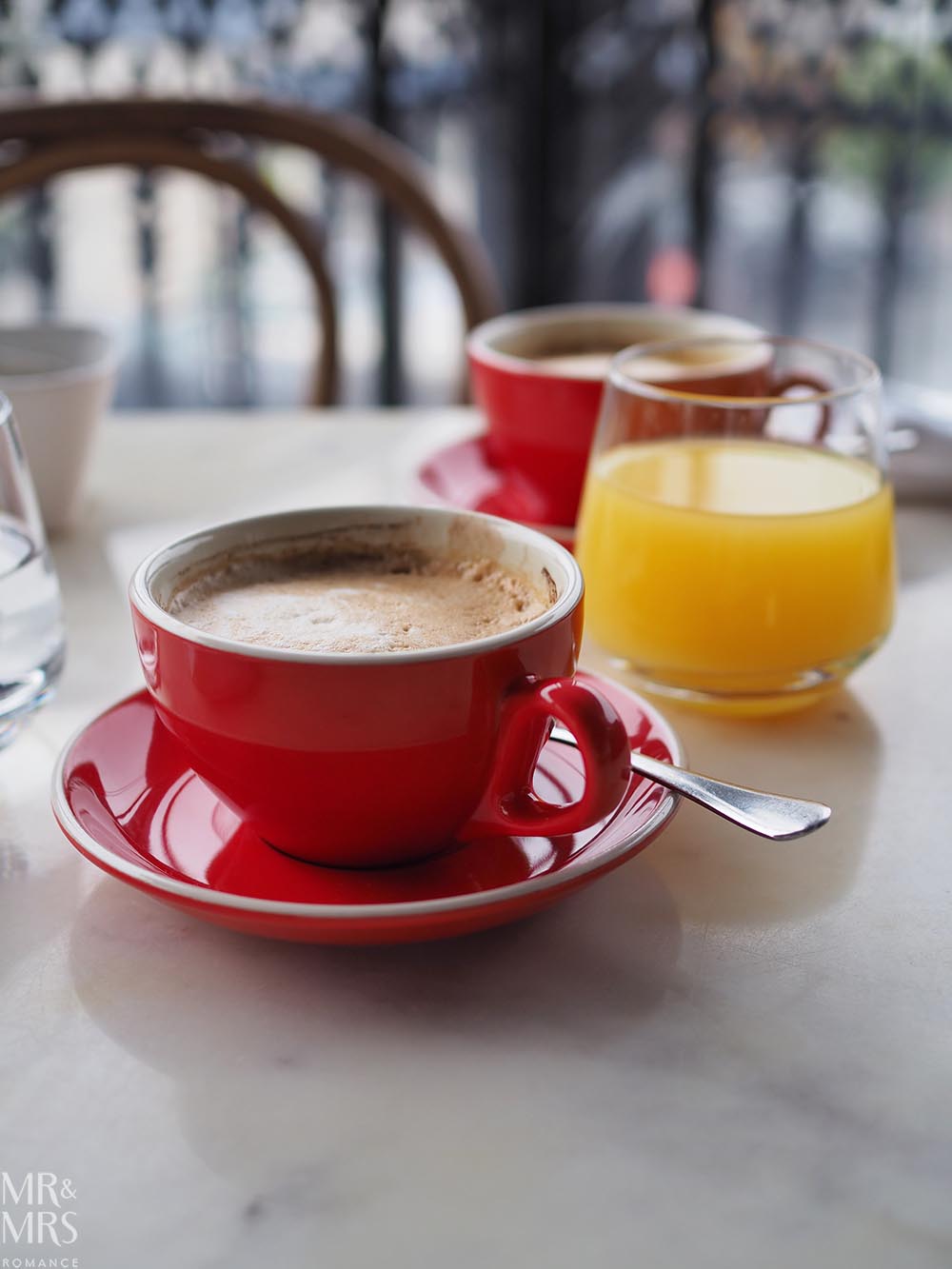 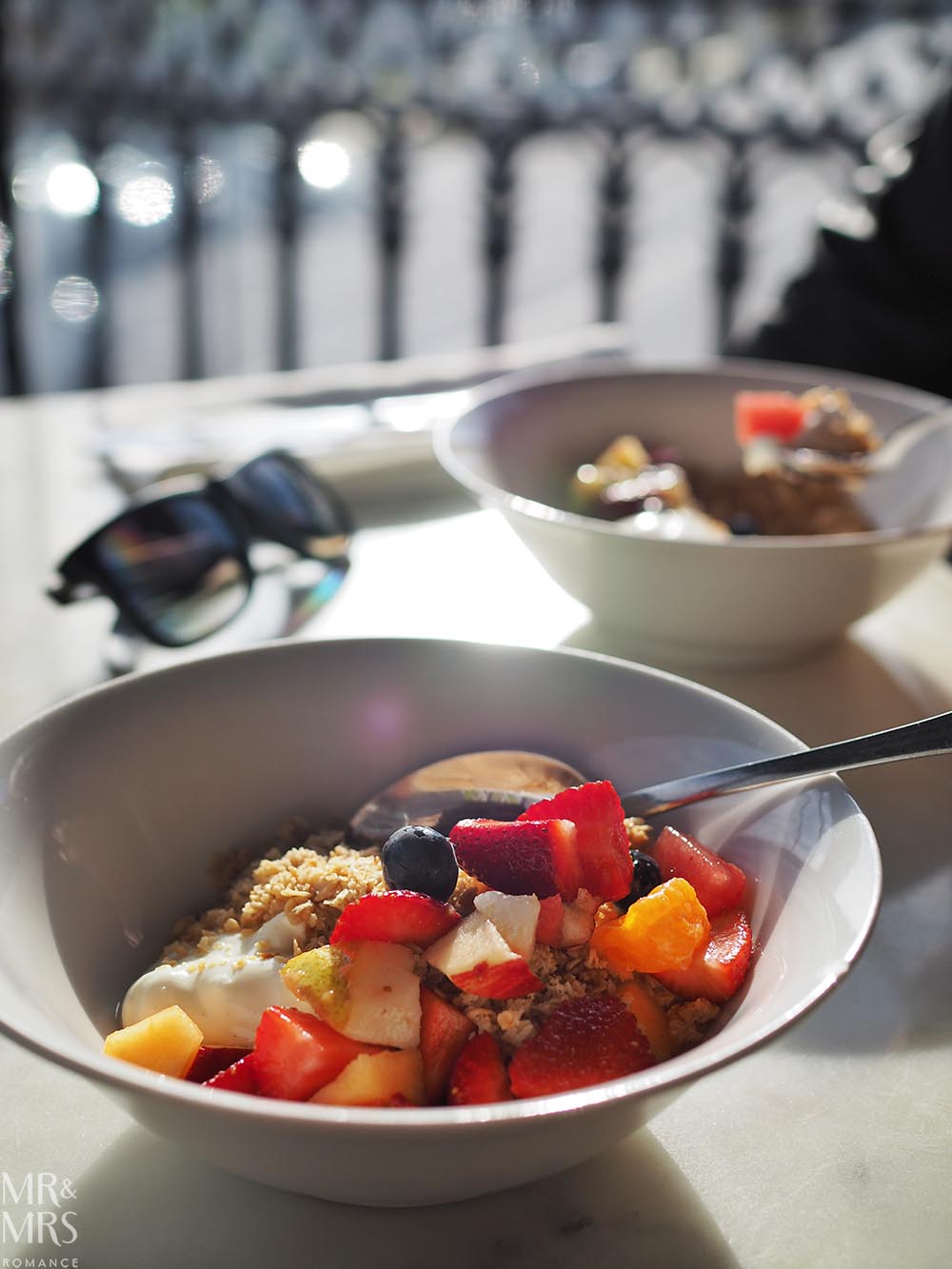 Don’t eat too much of that though, because the crisp local bacon, deliciously sweet grilled baby roma tomatoes, spinach, English muffins or sourdough (both locally baked) and your choice of eggs are absolutely splendid. 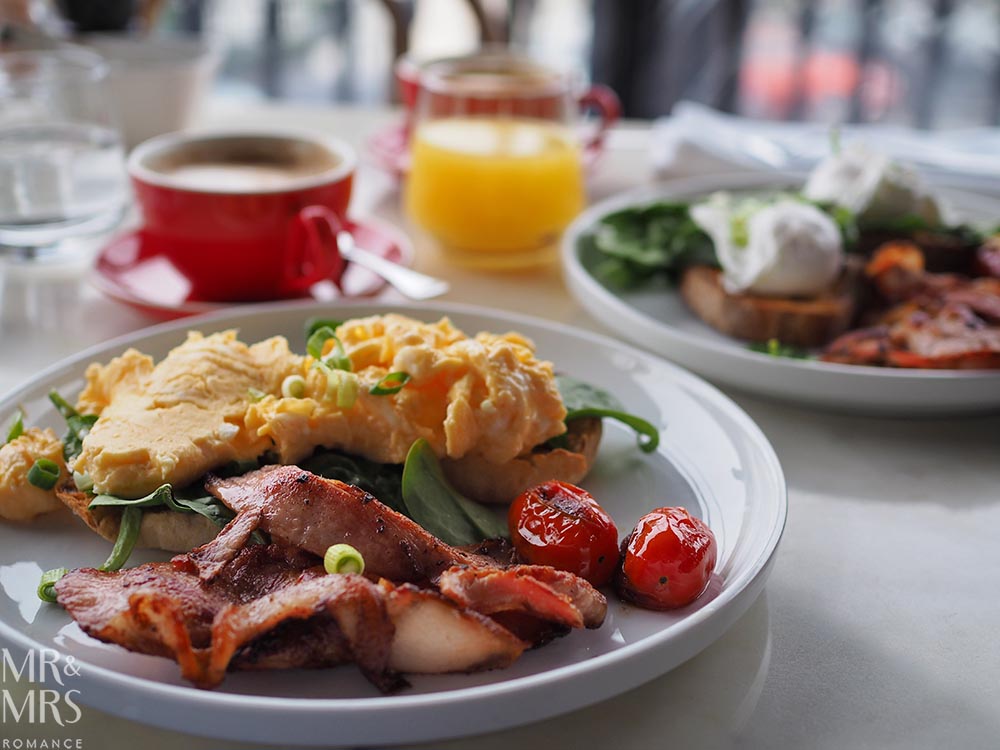 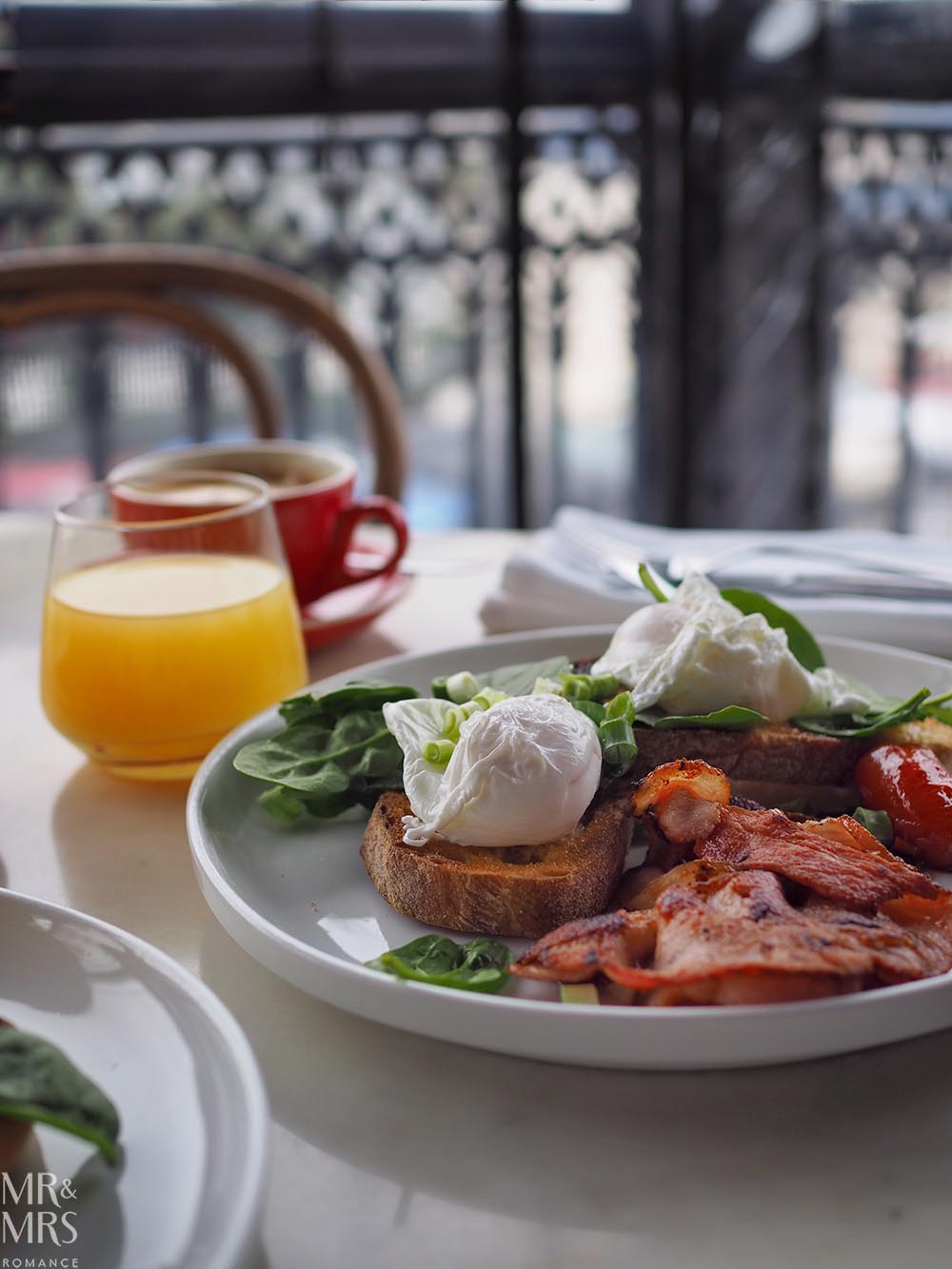 Plans for the future

Kerry, the lady who runs the Bronte and does such a wonderful breakfast, tells us that they’re looking at turning the formal dining room downstairs into an independent restaurant soon.

This will fill a void the town seems to be suffering from a bit: there aren’t many night-time dining options in Morpeth, though Maitland has some excellent dinner venues like The Rigby.

Also, plans to expand across the hotel’s little carpark will extend the number of rooms and make Morpeth even more of a target for visitors to this beautiful, fascinating part of New South Wales. 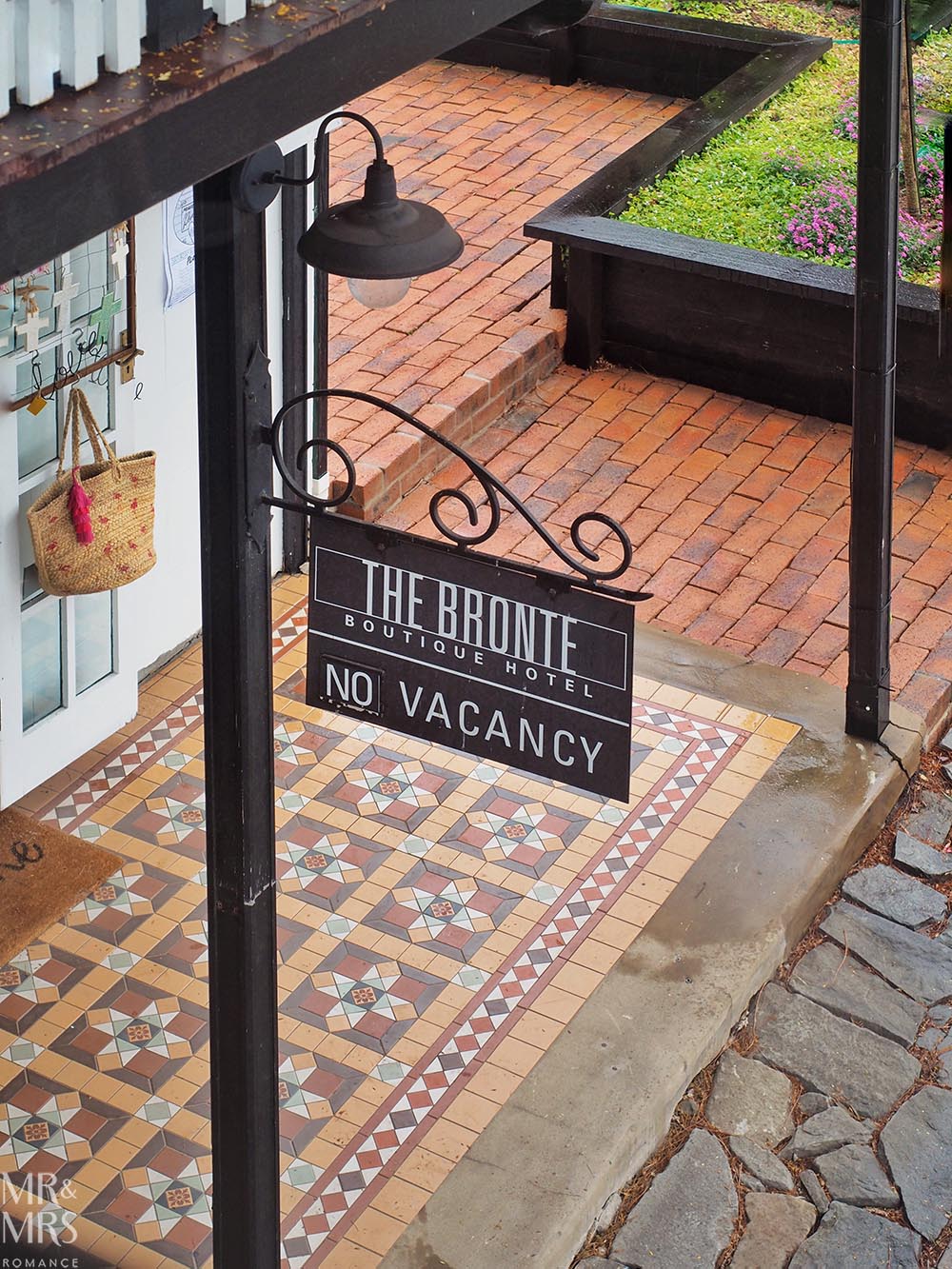 As unexpected as all the other surprises the Maitland area of the Lower Hunter, Morpeth and the Bronte Boutique Hotel promises an unforgettable stay in what once was one of the most important towns in the country. 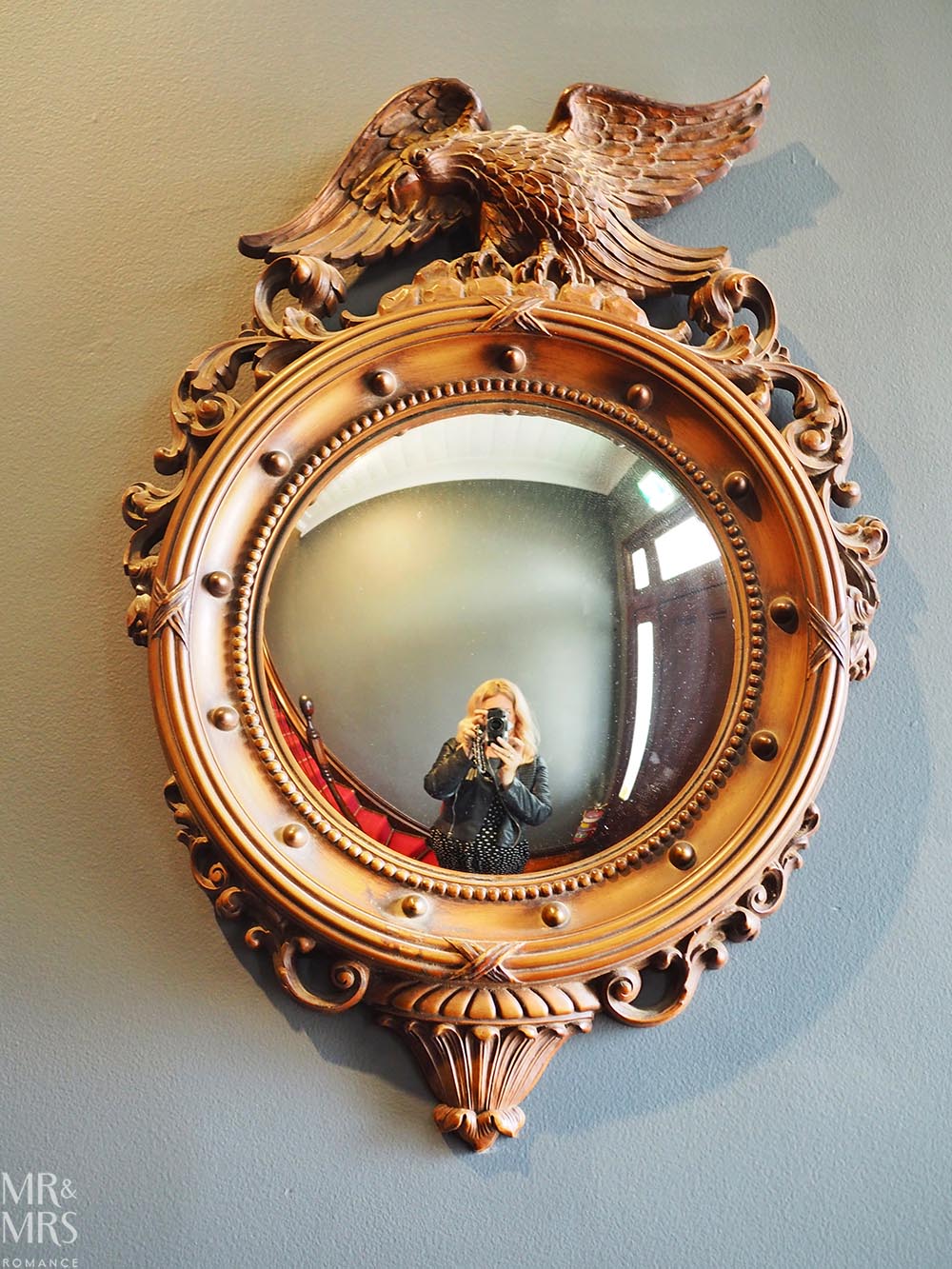 We stayed at the Bronte Boutique Hotel as guests of Destination New South Wales.

2016 has certainly been a polarising year, hasn’t it? Anecdotally, I’ve heard some amazing stories of romance and happiness, and some horrible tragic tales…