I don’t know why it’s taken us so long to hit Barrio Chino*. I’ve been lusting after their tortas since I first spotted them over on Instagram ages ago. But Barrio Chino, set in the heart of Kings Cross, and Barrio Cellar in the City, have plenty more to offer than just Mexi-burgers. This is nuevo Mexican at its best.

*Barrio Chino is now permanently closed. Barrio Cellar in the city, however, has a similar menu. 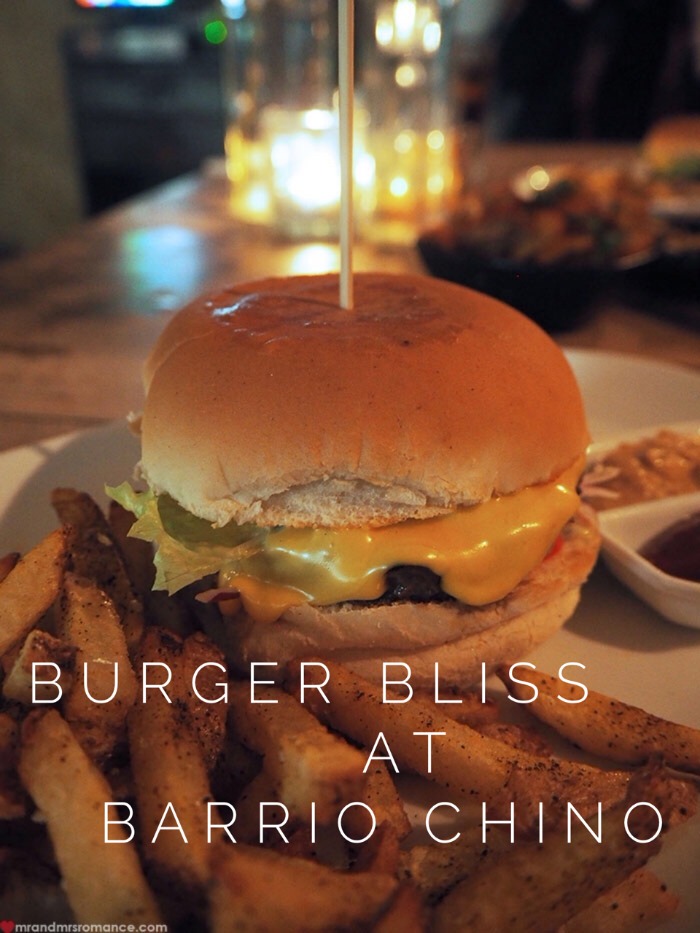 Ever since we first stepped foot in San Diego, we’ve lusted after that modern Mexican flavour Southern California does so well.

Barrio Chino – and now Barrio Cellar in the CBD – serves up the closest we can get to that special place between delicious Mexican cuisine and tantalising American tummy fillers here in Australia. And their cocktails aren’t half bad either!

As we pushed through the busy mid-week diners of this intriguing modern Mexican eatery, we all felt that anticipation you get from the promise of a really good feed.

I say ‘all’ as Mrs Romance and I were once again eating with our cuisine confidant Steph from LipstickAndCake.com. Like us, Steph has a great love of San Diego and the excellent Mexican food you can get there.

In fact, the feeling of this warren of a restaurant is very similar to some of the places in San Diego’s Old Town – a mecca for guaca-maniacs and taco fanatics. 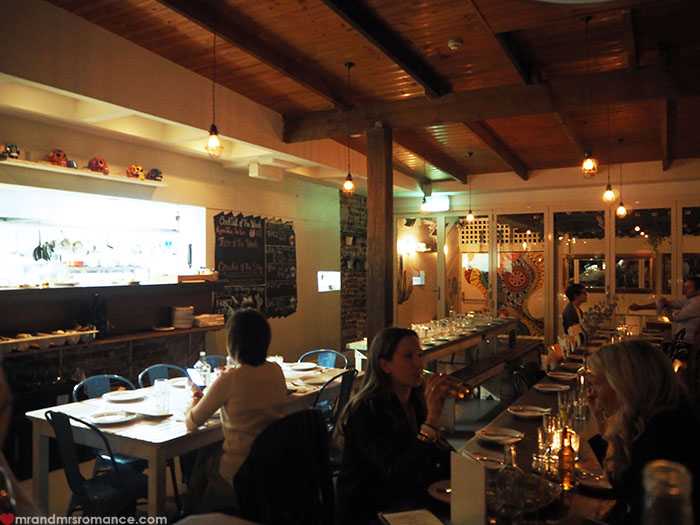 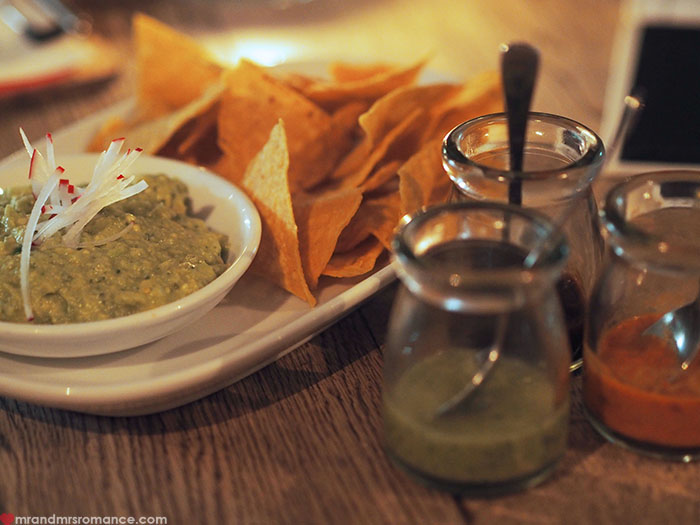 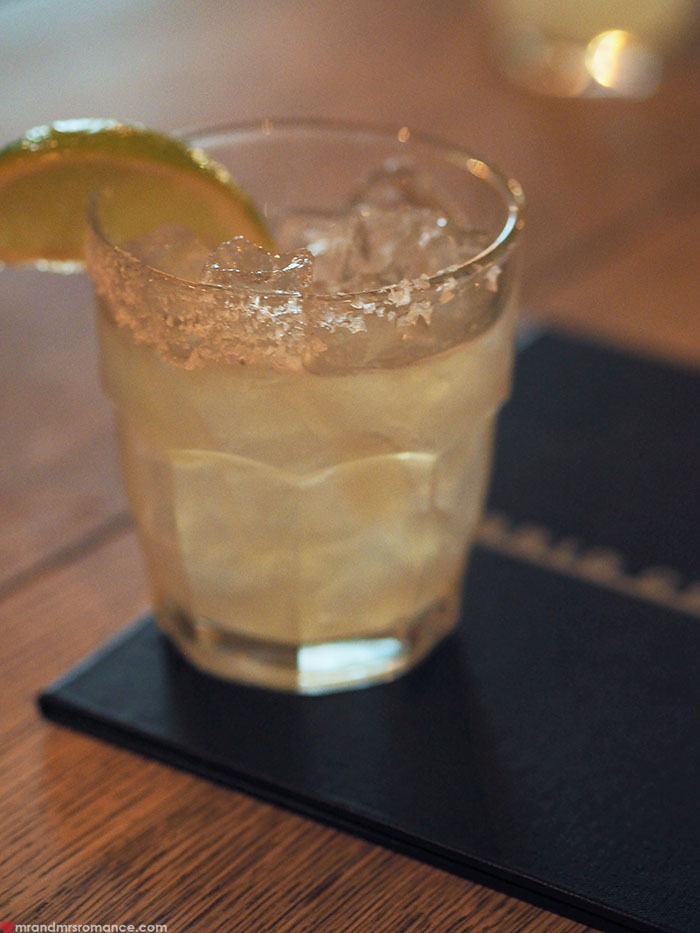 We started off with a round of guacamole and corn chips, which were amazing by the way – very authentic, and of course, a margarita. The range of tequila and mezcal they have here at Barrio Chino is incredible, and the house pour is El Jimador. It’s a name I happen to rather like!

Mrs Romance started with the ceviche of the day, which comes with more corn chips and is really fresh and delicious.

Meanwhile, Steph and I tried the smoked pork tacos from the daily specials board. I think I could’ve spent the rest of the evening gorging on these little fellows. Absolutely delicious. The flour tortilla smelt just like the ones we had in Mexico: that sweetness from the corn and the savoury notes from being toasted. So good. 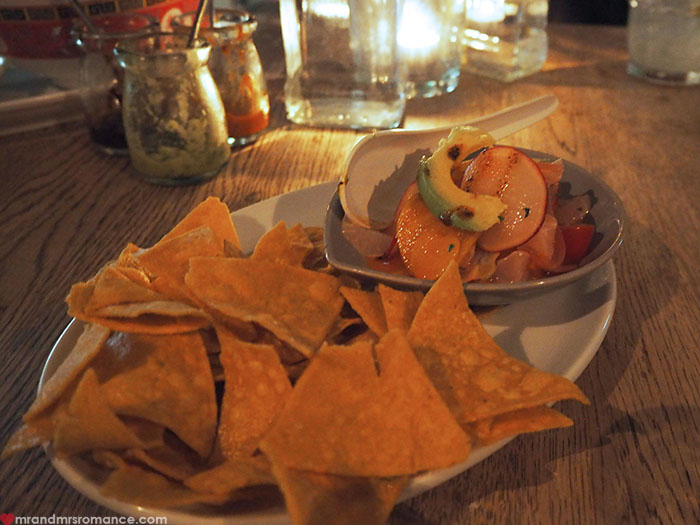 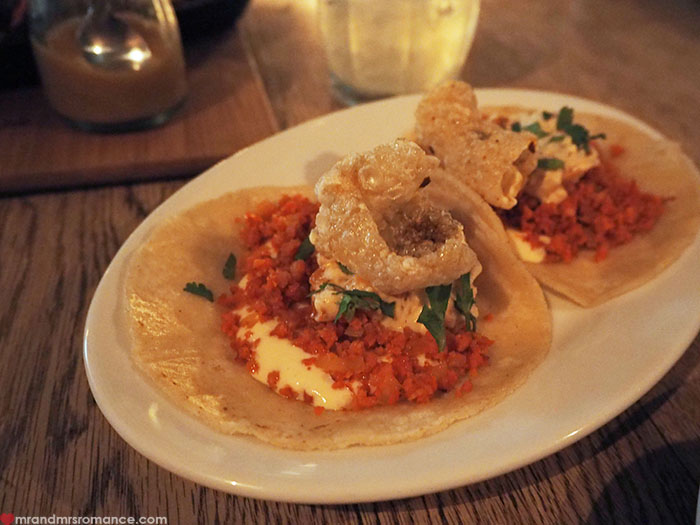 For mains, Mrs Romance had the carne asada brava – a 200g sirloin steak marinated then charcoal grilled, then sliced into strips. The flavour’s all about the smoke from the grill and the tenderness of the meat. It comes with a confit of mushroom, brown onion puree and crispy potatoes. It’s a classic Mexican dish – and gluten-free of course!

Steph and I couldn’t wait to get our hands on their burger – or the Barrio Torta as it’s called here. A beautifully tender burger patty they make in-house with gooey cheddar cheese, pickled jalapeños and chimmichurri mayonnaise. The bun is super soft – less like a brioche more like a hotdog bun but round. 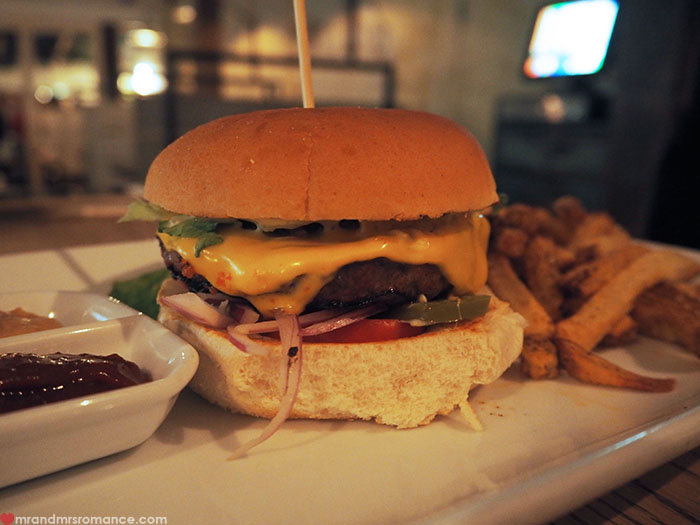 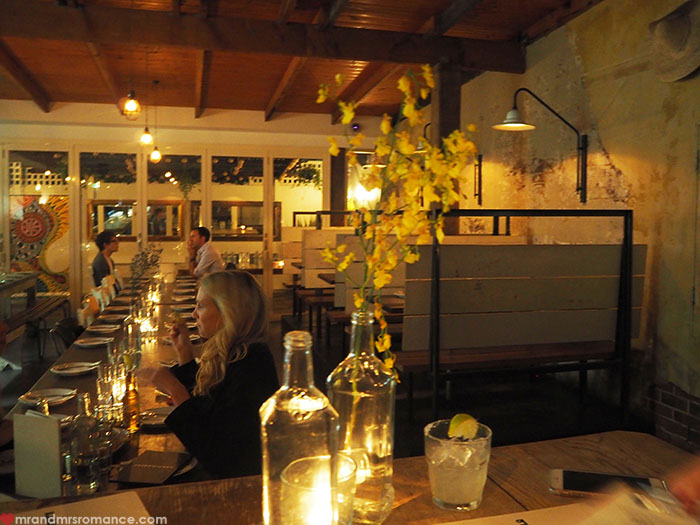 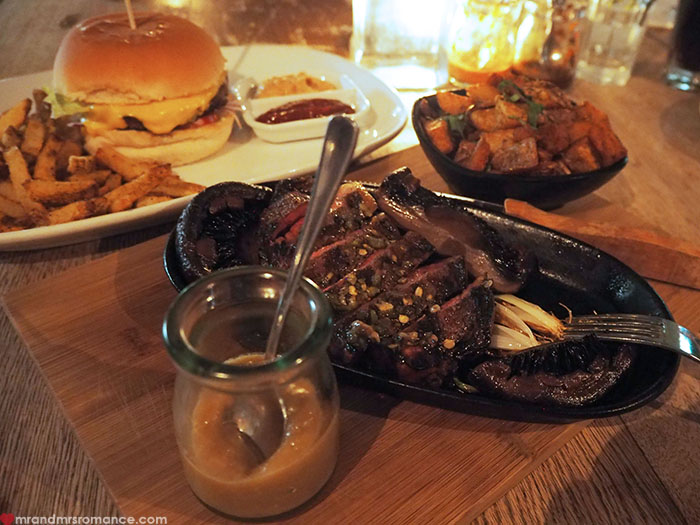 I’m very impressed with this beauty – it’s been well worth the wait. I’m pretty sure Steph was just as happy with hers.

So good was it, I couldn’t wait to try it in Barrio’s city-side sister venue, Barrio Cellar.

This tucked-away underground venue is right on Martin Place and used to be The Wine Banc back in the day. Mrs Romance and I haven’t been in here since around 2001. We came in here on one of our first dates! I know, isn’t it cute?

Barrio Cellar is beautifully styled as a Mexican dive bar-cum-tequila lounge. It’s managed to combine that speakeasy shabbiness with somewhere the city suits are still keen to visit after work. 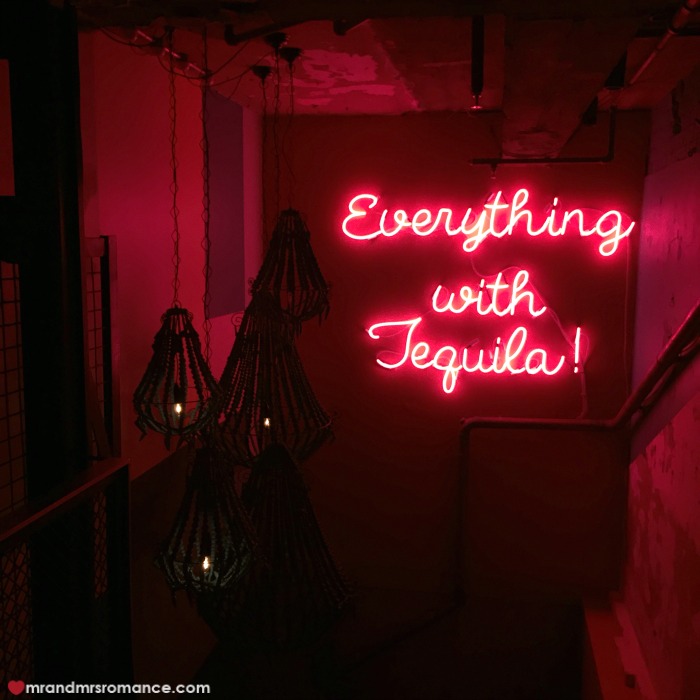 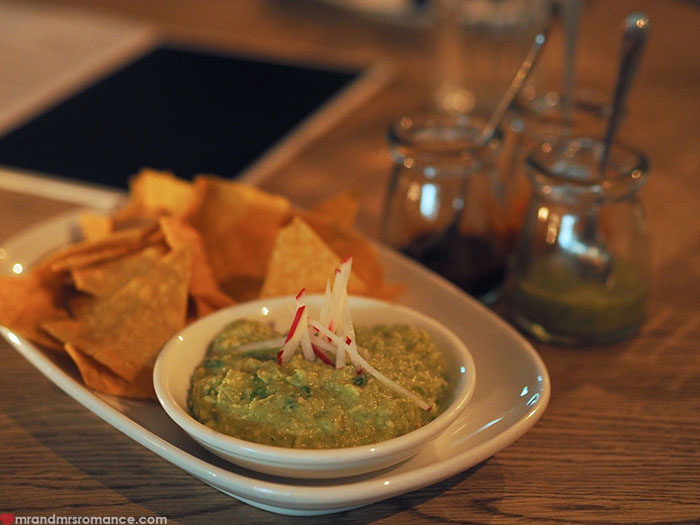 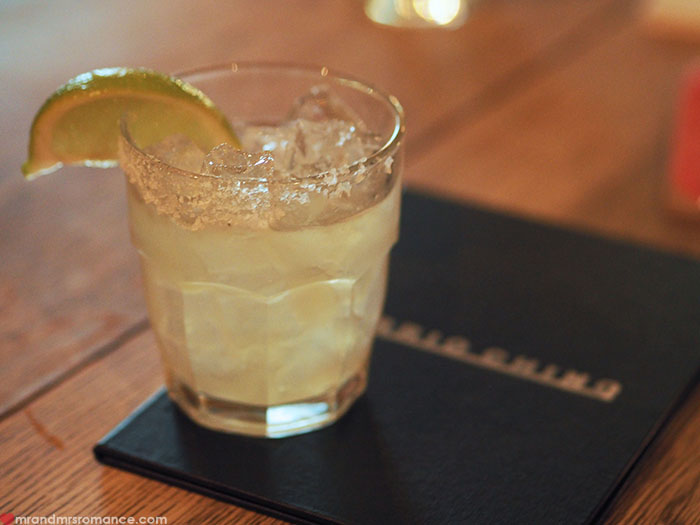 They serve a very similar food menu to Barrio Chino… and that’s why I decided to get the Barrio Torta again!

I’d say – because it wasn’t as busy in Barrio Cellar on the night we went, the kitchen took more time over my burger and so did a better job.

I was very tempted by the excellent tequila and mezcal selection. With almost 90 tequilas and over 15 mezcals on the shelf, there’s plenty to choose from.

If you’re not sure what to expect from mezcal, here’s our run-down of the difference between tequila and mezcal, and why it’s such a delicious, interesting drink. 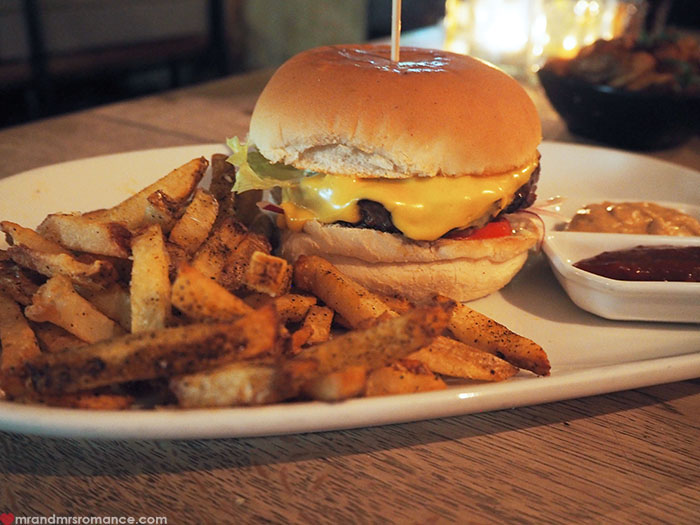 Where do you go for your Mexi fix? Tell us in the comments!

A flight, a breakfast and a convene with nature

It feels like ages since Mrs Romance and I have been northside. We worked it out that it has in fact been about 4…