Baseball caps and hats of function – okay. Everything else – no-kay!

Men in hats look dapper and charming. I believe more men should take time when dressing and choose a hat to match. 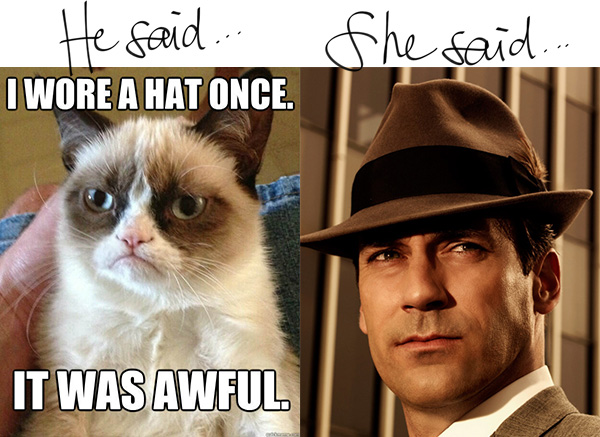 Why do men wear hats? I’m not talking about beanies or baseball caps. They have function and modernity on their side. I’m talking fedoras and panamas, homburgs and deerstalkers, pork pies and the dreaded trilby; hats that make a statement – a big, look-at-me statement. Now, don’t get upset. I think making a statement is good. Everyone does it. From sports jock to Gaga, everyone who wears clothes is making a statement.

For me, the statement made when wearing a hat is ‘my head, and in fact everything about me, is so average I need this thing on my noodle to even it all out.’ Well, it doesn’t.

In years past, if you were seen outside bare-headed, it was the height of impropriety and that’s why an old geezer will look great in a hat. To be honest I wish the old days were back and I could wear a hat with impunity. I’ve got no hair. It would be nice. But those days have gone and people need to just move on.

Hats do have a place. If you’re going hunting, fine – wear a deerstalker. If you’re going to work in a butcher’s, great – wear a pork pie hat. Policeman? Good for you. You get to don a hat. But if you’re going to a music gig, this is not a good enough reason to pop a trilby on your below-par brain sack. Just because someone said it’s fashion, you don’t have to wear one.

I mean, what’s next? Toppers? Bowlers? Pith bloody helmets? I mean, how would you react if you saw someone sporting spatz or a monocle? Or riding a penny-farthing?

Like the pocket handkerchief, the hat has been lost in men’s style vocabulary. Women spend time thinking about what they are going to wear and men just throw something on and walk out the door. When I see a man wearing a hat that complements what he is wearing, it shows an effort that I appreciate.

Mr Romance suggests that hats are only covering up a bad haircut or a strangely shaped head, but what’s wrong with that? I don’t want to see an ugly haircut, I’d rather look at a nice hat. I give extra points to the man who is wearing a hat for those reasons.

I like the nostalgia of men in hats. Perhaps it’s the ‘Don Draper’ effect, but I want to see more men wearing hats.

One point to note: Don’t rigidly stick to an era and ‘theme’ your hat with your outfit or you risk looking like you’re going to a fancy dress costume party.

A hat requires a certain level of confidence, as they are a fashion talking point, but feel comfortable in your hat and walk with pride.

Men, don’t be afraid of wearing hats. Fashion should be fun and you’re missing out if you’re not adding hats to your wardrobe.

How to have the perfect romantic staycation

Need to recharge but don’t have any annual leave left? A romantic staycation is the perfect solution. Here are our top 5 tips on…