Amidst the green, rolling hills of Waikato is the incredible Hobbiton movie set from Peter Jackson’s film adaptations of The Hobbit and The Lord of the Rings. Here’s what to expect in Hobbiton, New Zealand. 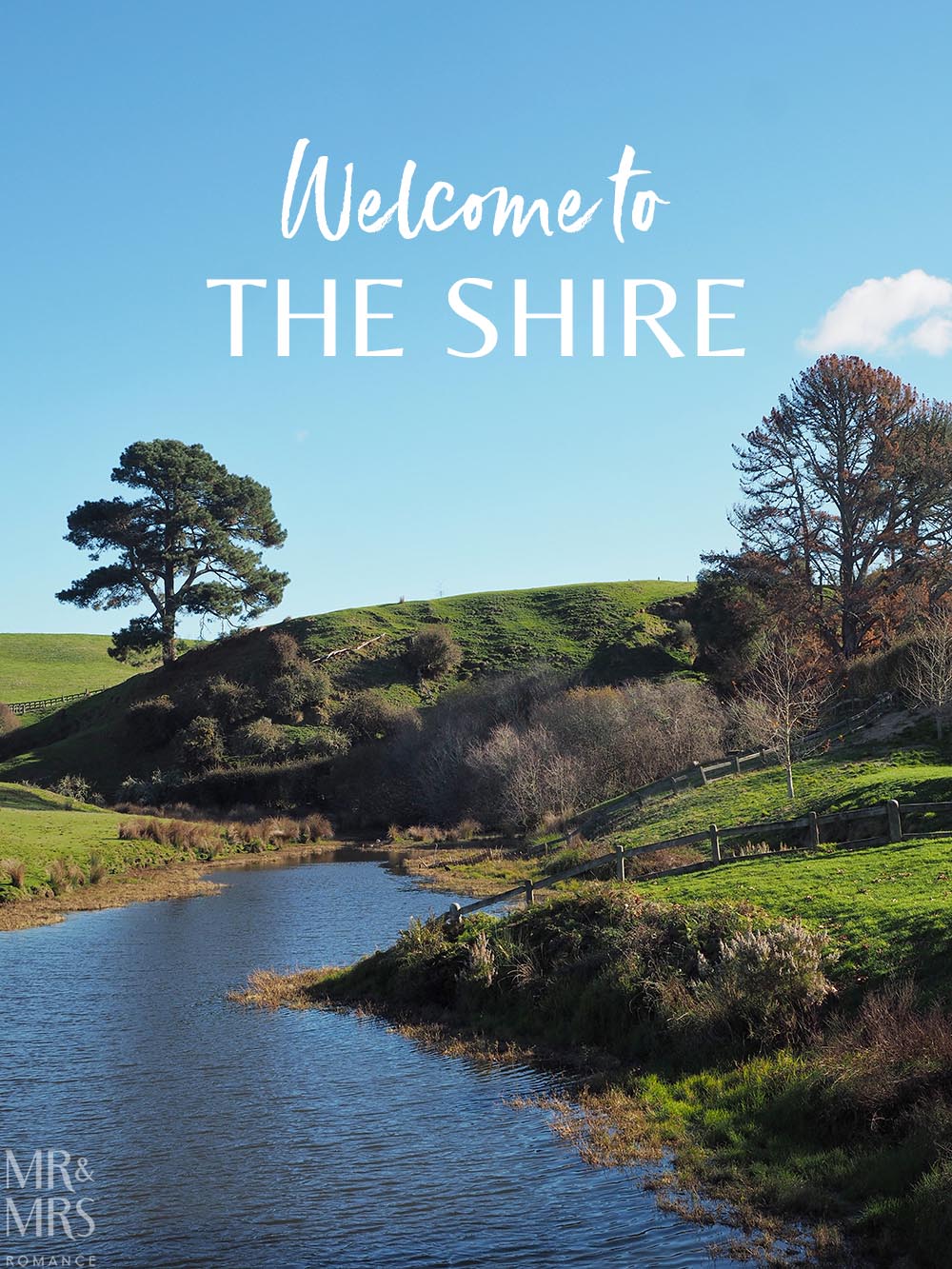 I probably have a bit of purist snobbery around modern interpretations of Tolkien’s stories, so I’m probably quite hard to please.

I didn’t mind the Lord of the Rings films, though I think they lacked a bit of the nobility of the books. And I’m not a fan of what Jackson did with The Hobbit.

But nonetheless, I was willing to give the film set a chance – and I’m really glad I did.

This was the first time I’d ever been to a movie set before.

Here’s our short video of the Hobbiton Movie Set:

Hobbiton the Movie Set – why go?

I’ve been on live TV, done piece-to-camera for live news crosses and seen behind the scenes and backstage at Cirque de Soleil, but I haven’t been to places like Movie World or Universal Studios.

The Hobbiton movie set is really impressive – well worth the hype. I left feeling like I understood not only the workings of the franchise, but how movies work as a whole.

Best of all, it really did feel like I was standing in my imagination from my childhood. Peeping through windows of hobbit holes, propping up the bar of the Green Dragon Inn, strolling over the bridge past the mill at Bywater and enjoying the peace of this little corner of Middle Earth.

It’s the first time I’ve experienced the magic of stories being brought to life.

Arriving at Hobbiton and getting to the filmset The entrance to Hobbiton – known as The Shire’s Rest – isn’t the same as the movie set. In fact, it’s not even the start of the set.

The Shire’s Rest is the car park, ticket office and waiting area for the start of the tours to Hobbiton. There’s also a café and souvenir shop here.

One doesn’t simply walk into the Hobbiton Movie Set…

At The Shire’s Rest, you collect your tickets and wait for your tour number to be called. Like clockwork, you board your specially designed Hobbiton coach and head through the hills to the set.

That’s right, there’s a coach ride to Hobbiton. You can’t drive or walk there and there’s no self-guided option. It’s a tour or nothing. 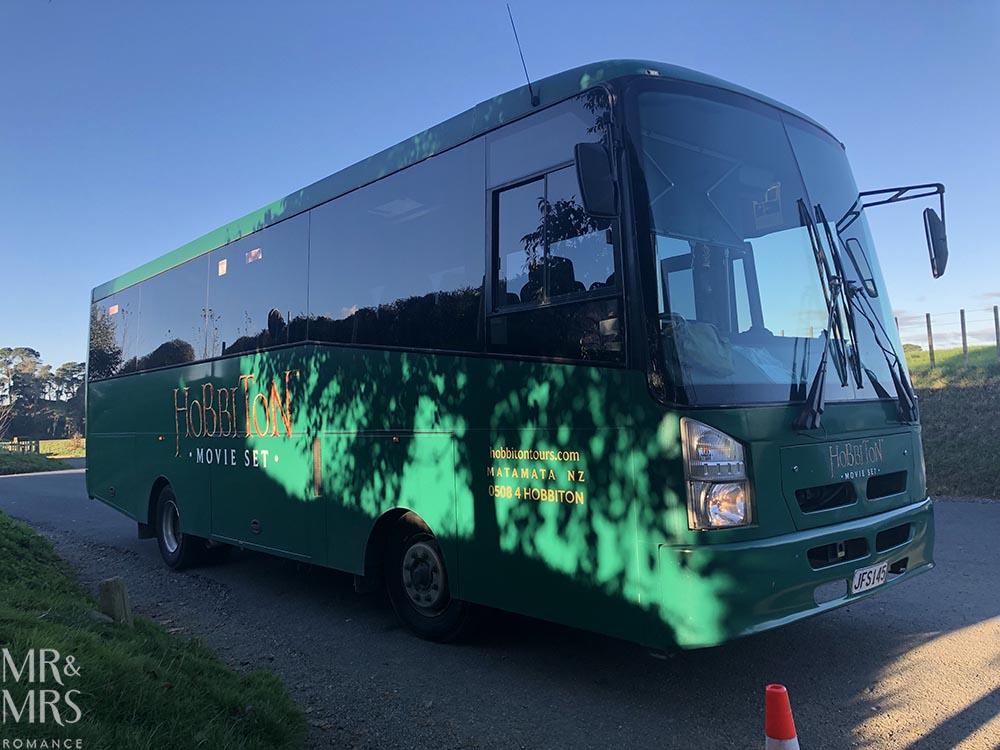 This is actually a smart idea, as it restricts the numbers of people on the set so you’re not constantly battling queues or crowds.

On the coach, you get to learn about how Peter Jackson was flying over Waikato scouting locations for Hobbiton. He spotted this area – a sheep farm that’s still function now – and worked out a deal with the landowner to build what’s now the permanent structure of Hobbiton.

You also meet your tour guide, who will explain what happens next.

What happens at Hobbiton

There are a couple of different tours to choose from; either the straightforward Hobbiton tour, which takes two hours or a tour and meal combo, which takes about two and a half to three hours.

We had a meal-tour combo.

When you arrive at Hobbiton, it’s very tempting to run off and look at everything. It’s amazing. The level of detail is incredible. As you’d expect, it’s just like being in the movie!

However, instead of heading to the Green Dragon Inn, where the coach drops you, you go into the marquee. This is set up to look like the Party Tent in The Lord of the Rings where Bilbo makes his speech then disappears.

It’s quite magical and a lot of fun. 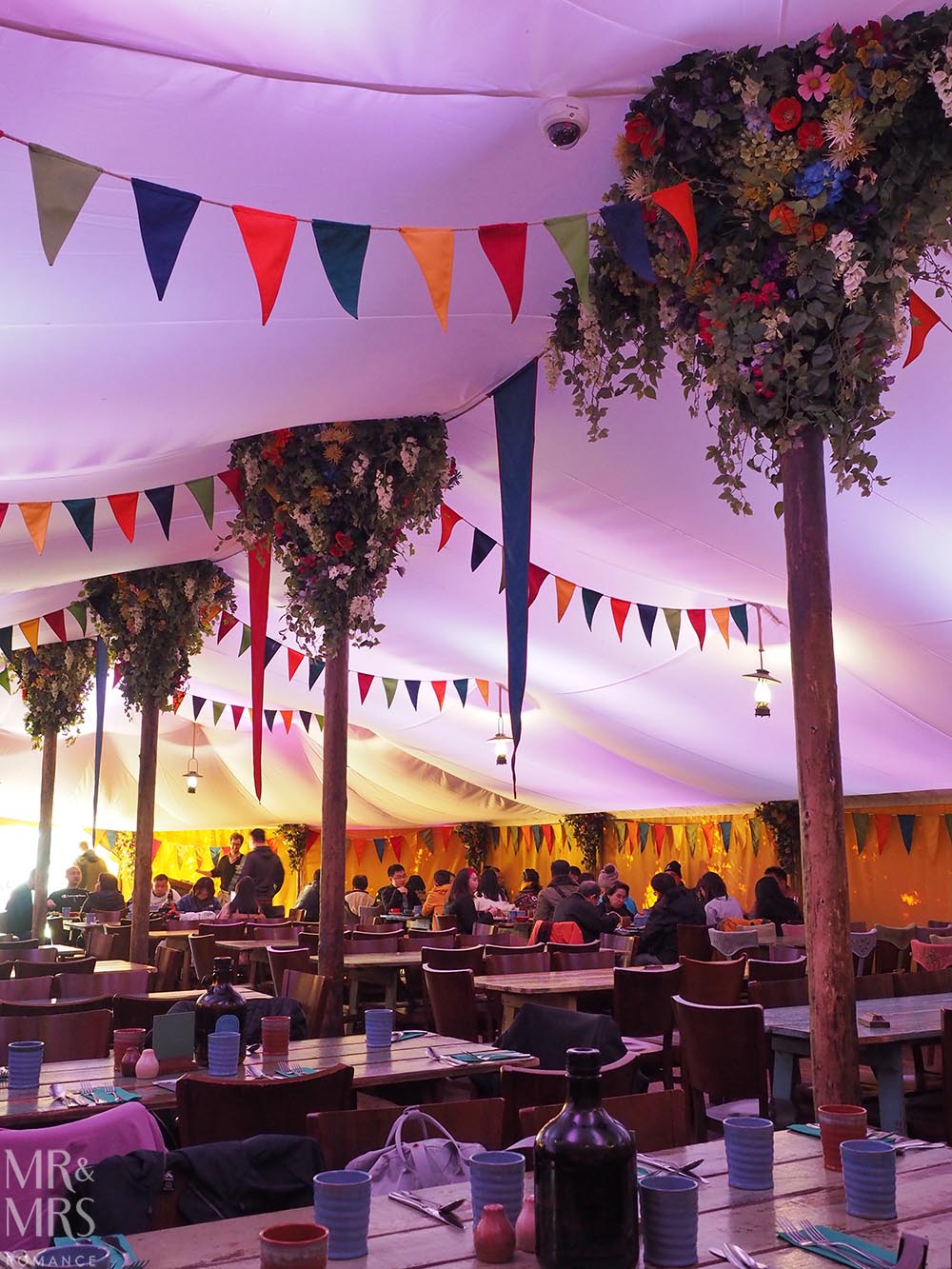 Sadly, the food was no match for the thrill of being in the Party Tent. The buffet was a bit empty and the food itself was either over-cooked or under-seasoned. A bit like a hotel breakfast, we ended up back at our seats with a strange collection of incongruous samples. The only thing to drink there was water.

We finished what we could and made for the door, double-checking with our guide what time we’d be meeting for the tour. 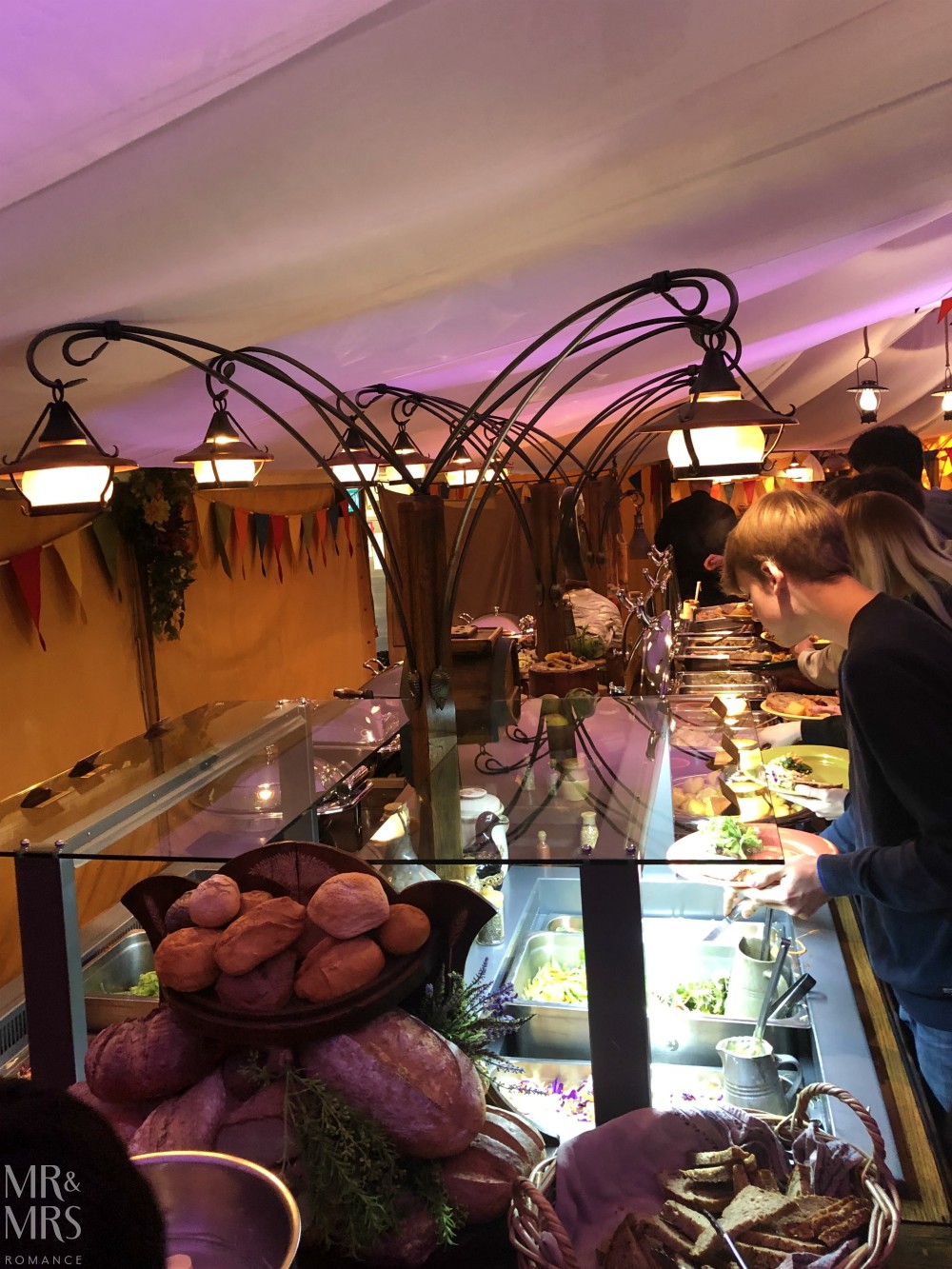 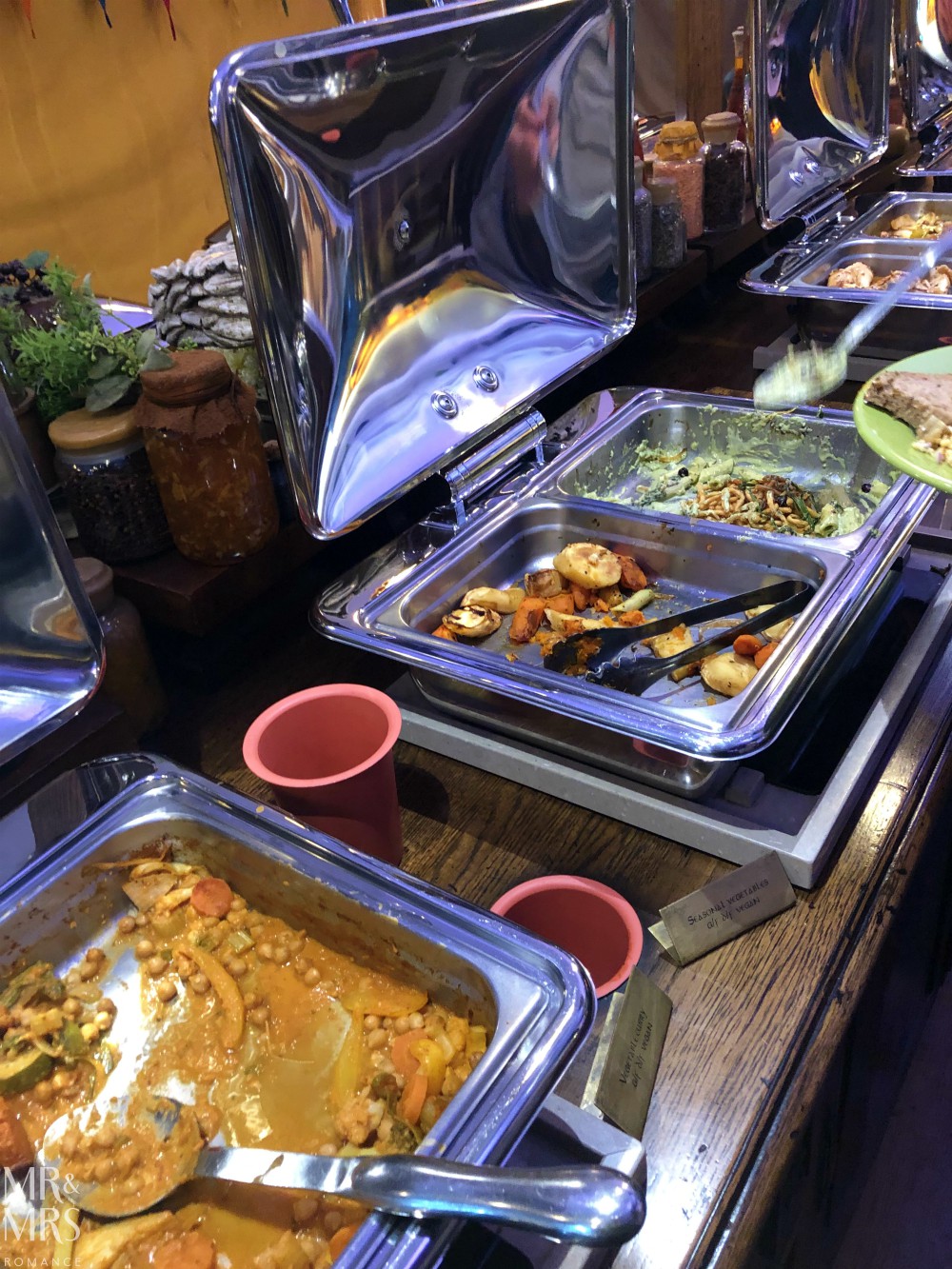 While we waited for the group to assemble, we explored the little mill on the bridge and the Green Dragon Inn. I geeked out a little bit when I realised this was accurate to the books – the inn is past the mill over the bridge to Bywater.

But more about the Green Dragon later. 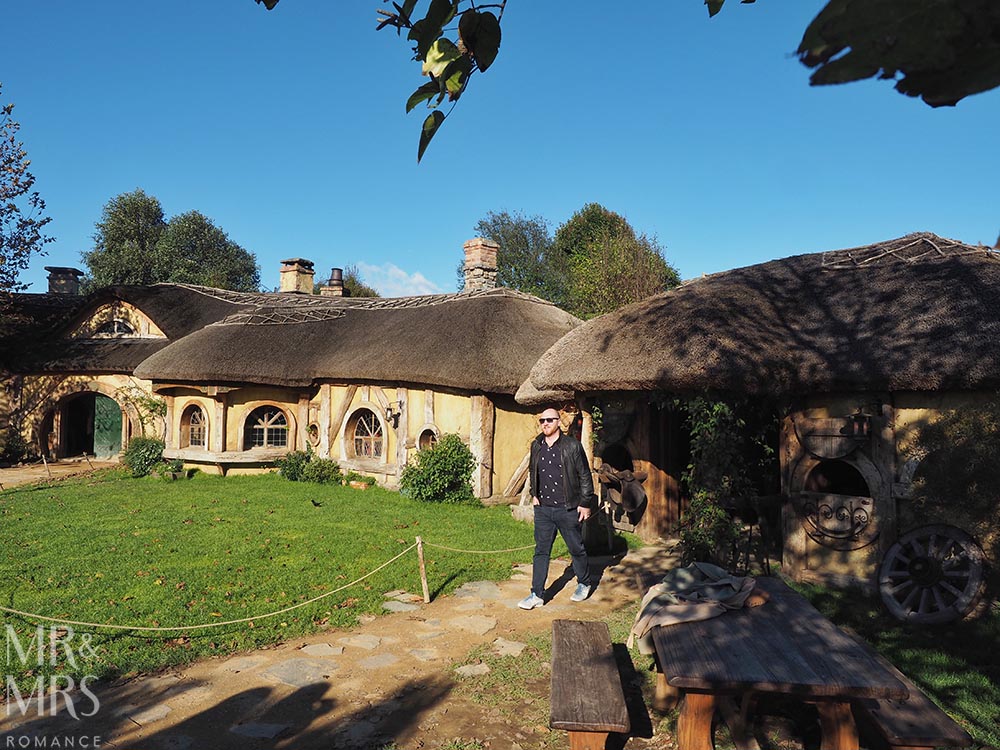 The tour of Hobbiton

Our guide took us from the Party Tent and our group of around 30 walked up the hill towards the village and the main part of the film set. 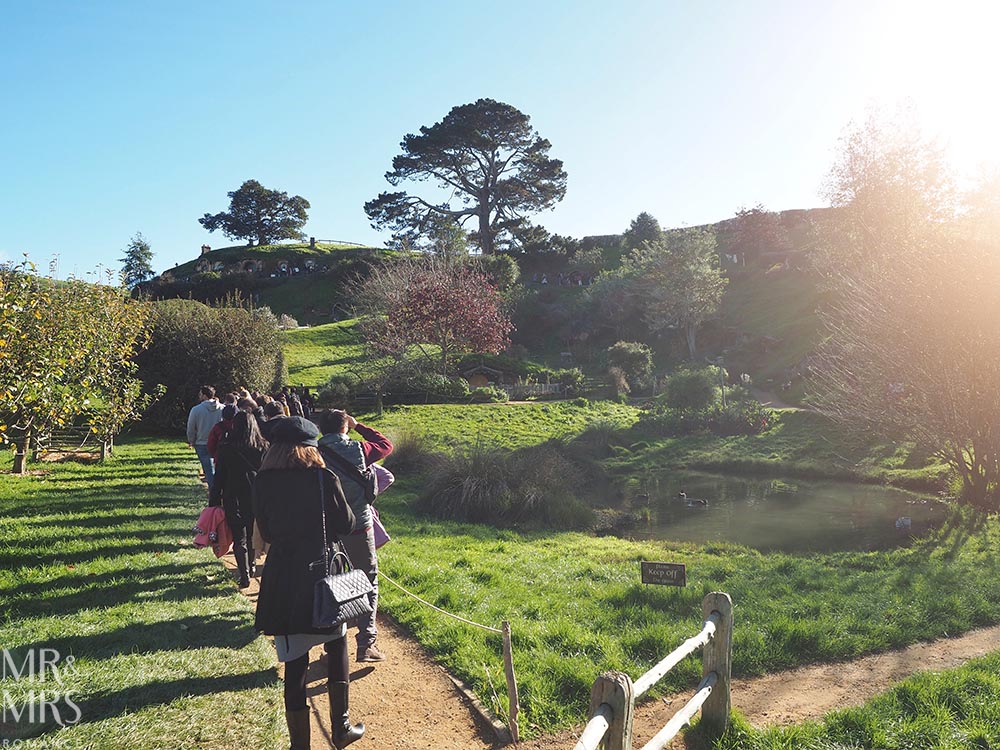 As we walked, the guide explained lots of the different features and details we would have missed or not understood without her pointing them out. Little tables set for preparing food, a fishing spot complete with rod and line and orchards full of fruit. The orchards are fully operational, with some of the produce being used in the restaurant and inn.

However, our guide warned us not to try and eat any of the things on plates or tables as these would all be wooden props.

We climbed higher up the hill and walked amongst the hobbit holes, their colourful round doors iconic to the Tolkien stories. 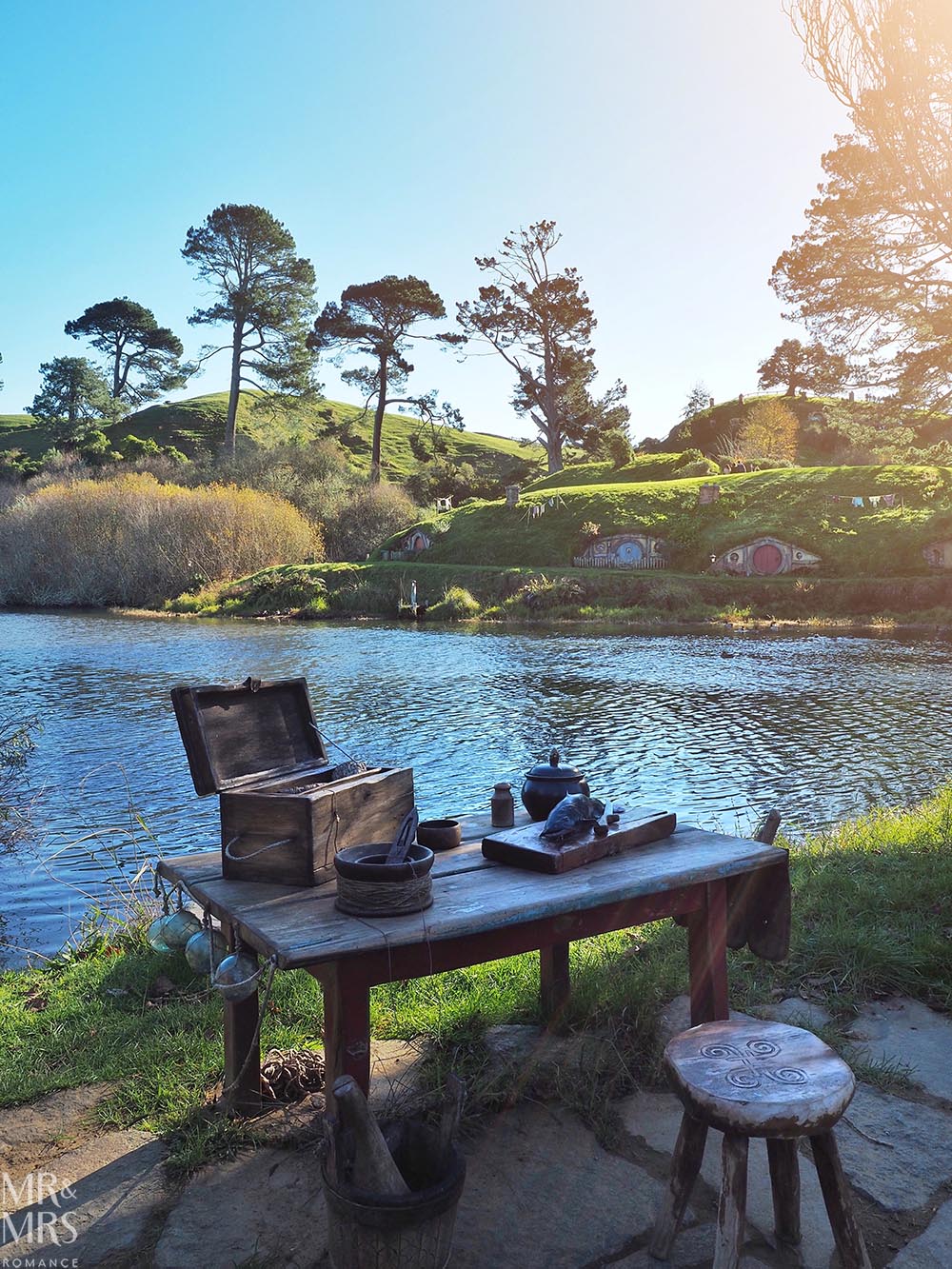 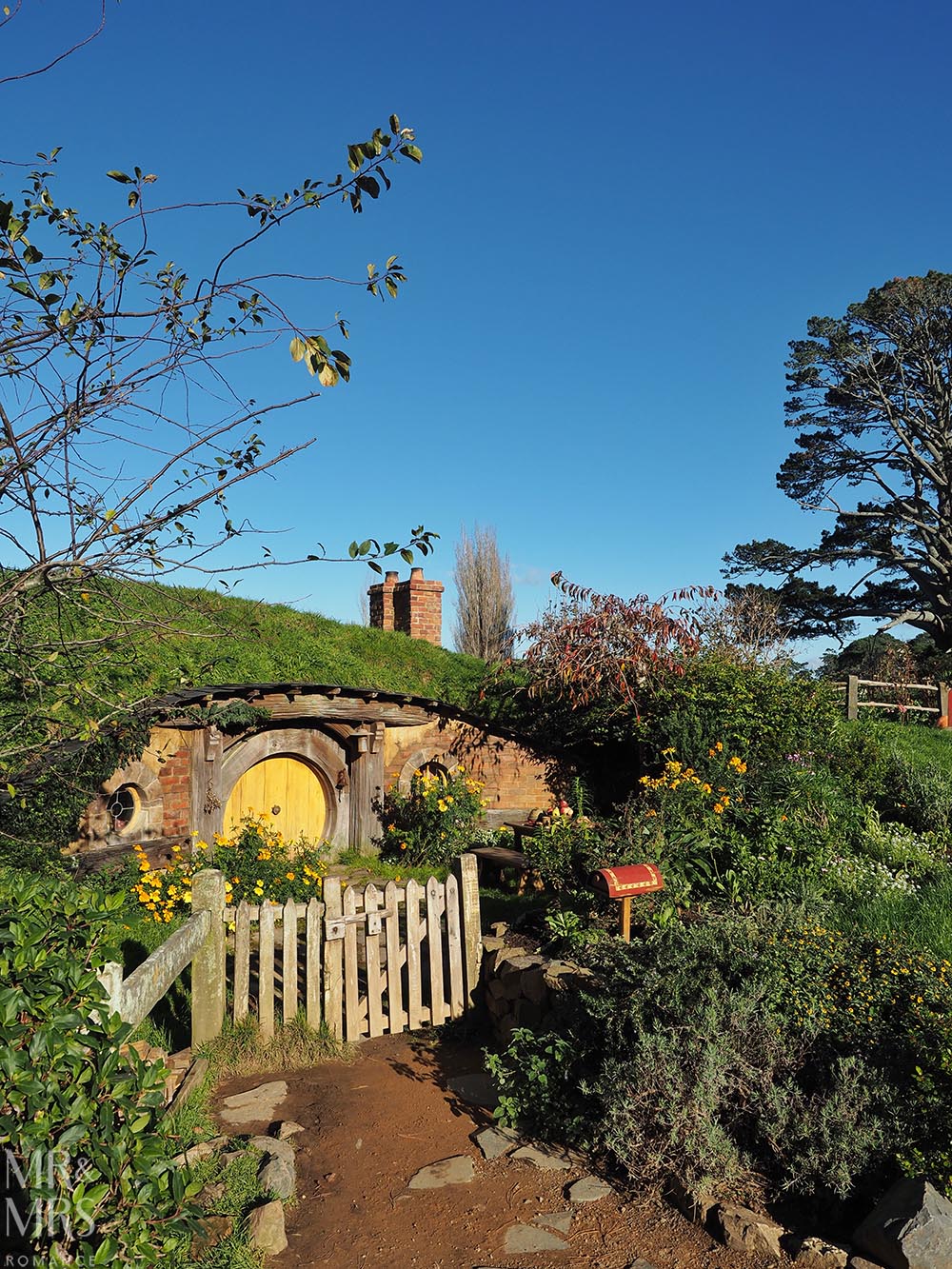 Interestingly, some doors are big enough for regular humans to use, others are small enough to be the right size for hobbits. This was done to allow the hobbit characters in the films to look small and the human-size characters like Gandalf to look bigger.

Many of the hobbit holes have interactive elements we were allowed to explore, like this little stall of homemade cheeses! 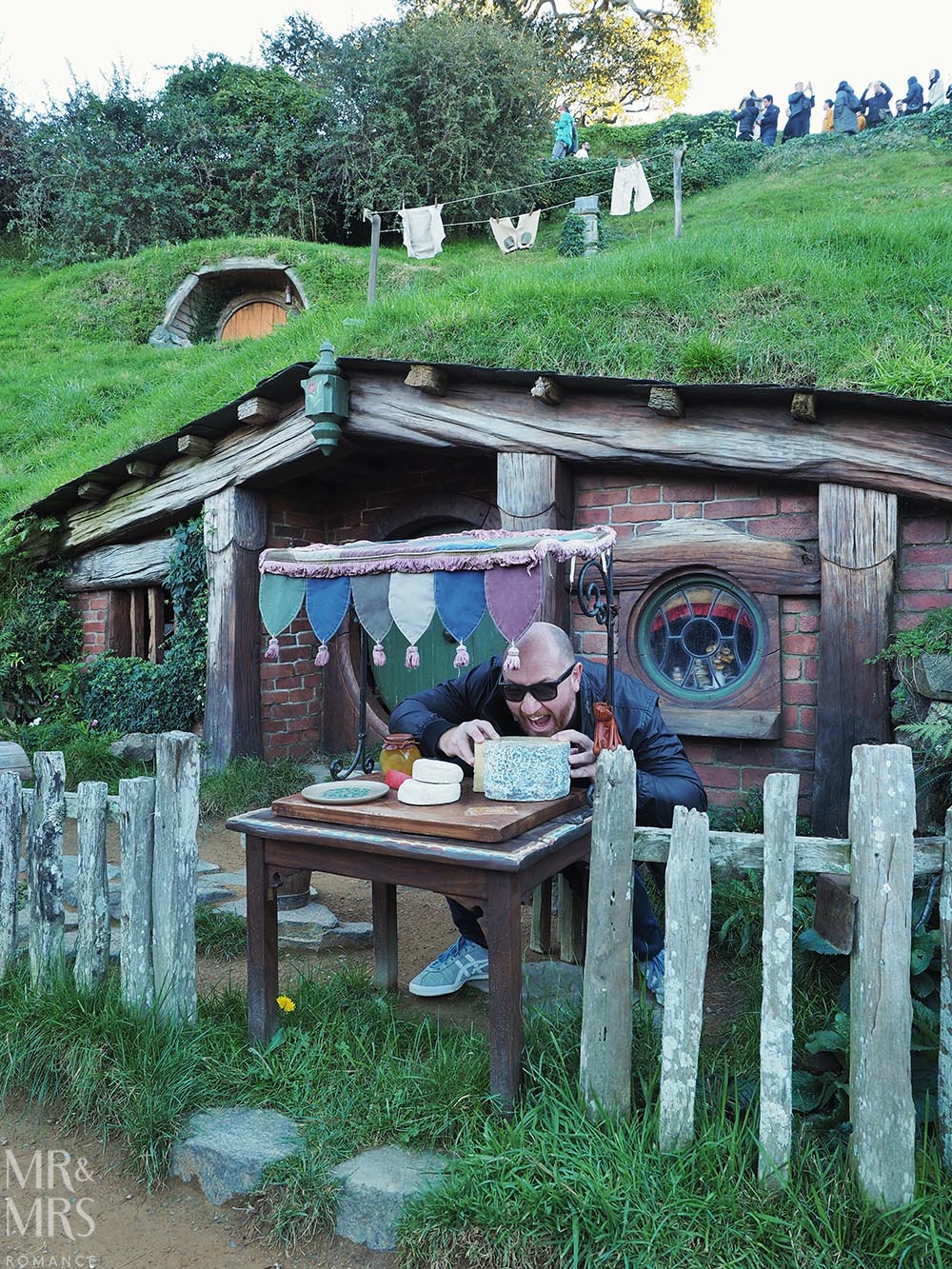 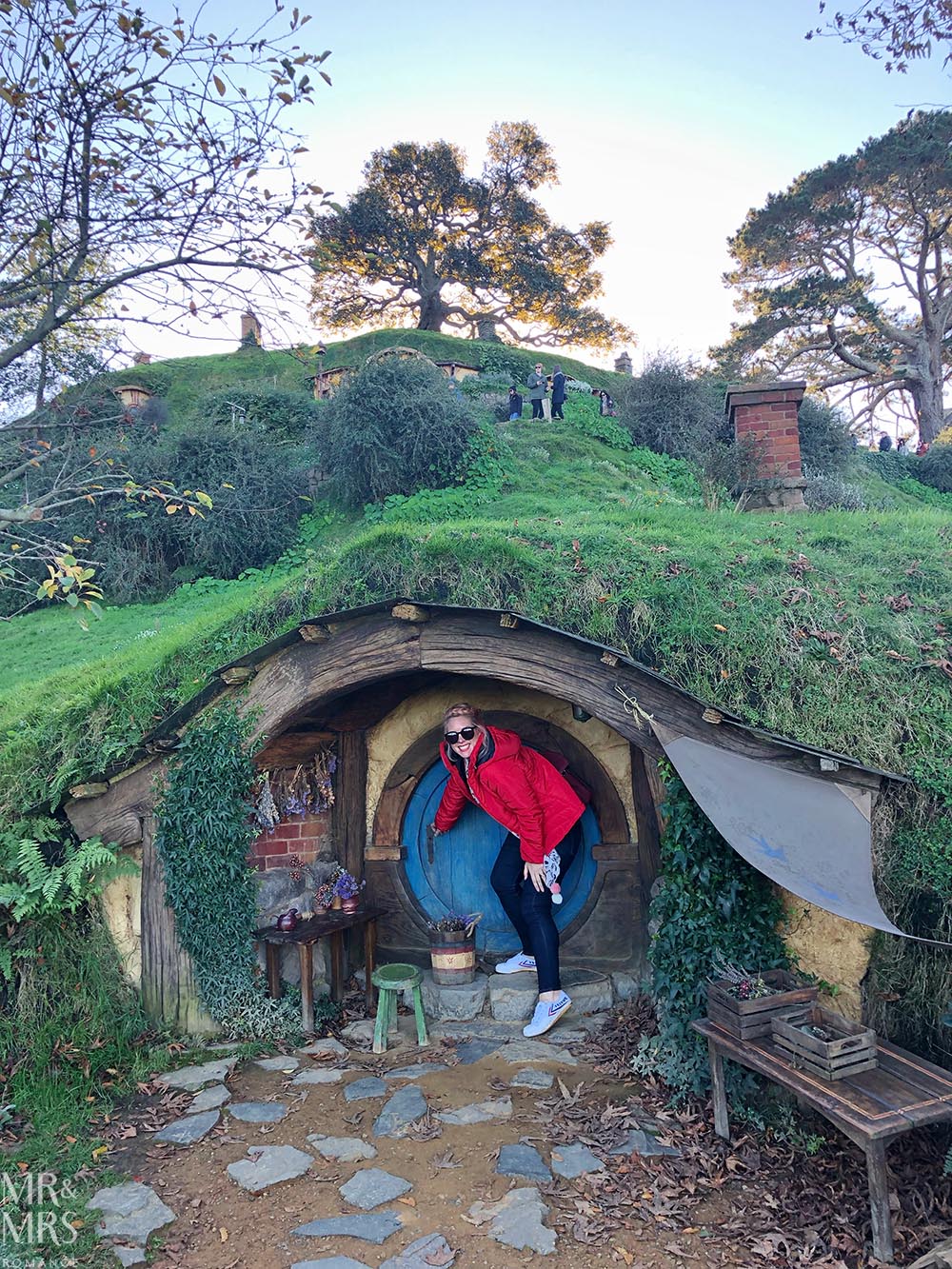 The tour culminates at Bag End – Bilbo and Frodo’s home at the top of the hill. Views out over Hobbiton from here are beautiful and you get a sense of how massive and detailed this set really is.

On top of Bag End is probably the most fascinating part of the filmset – a great oak tree. 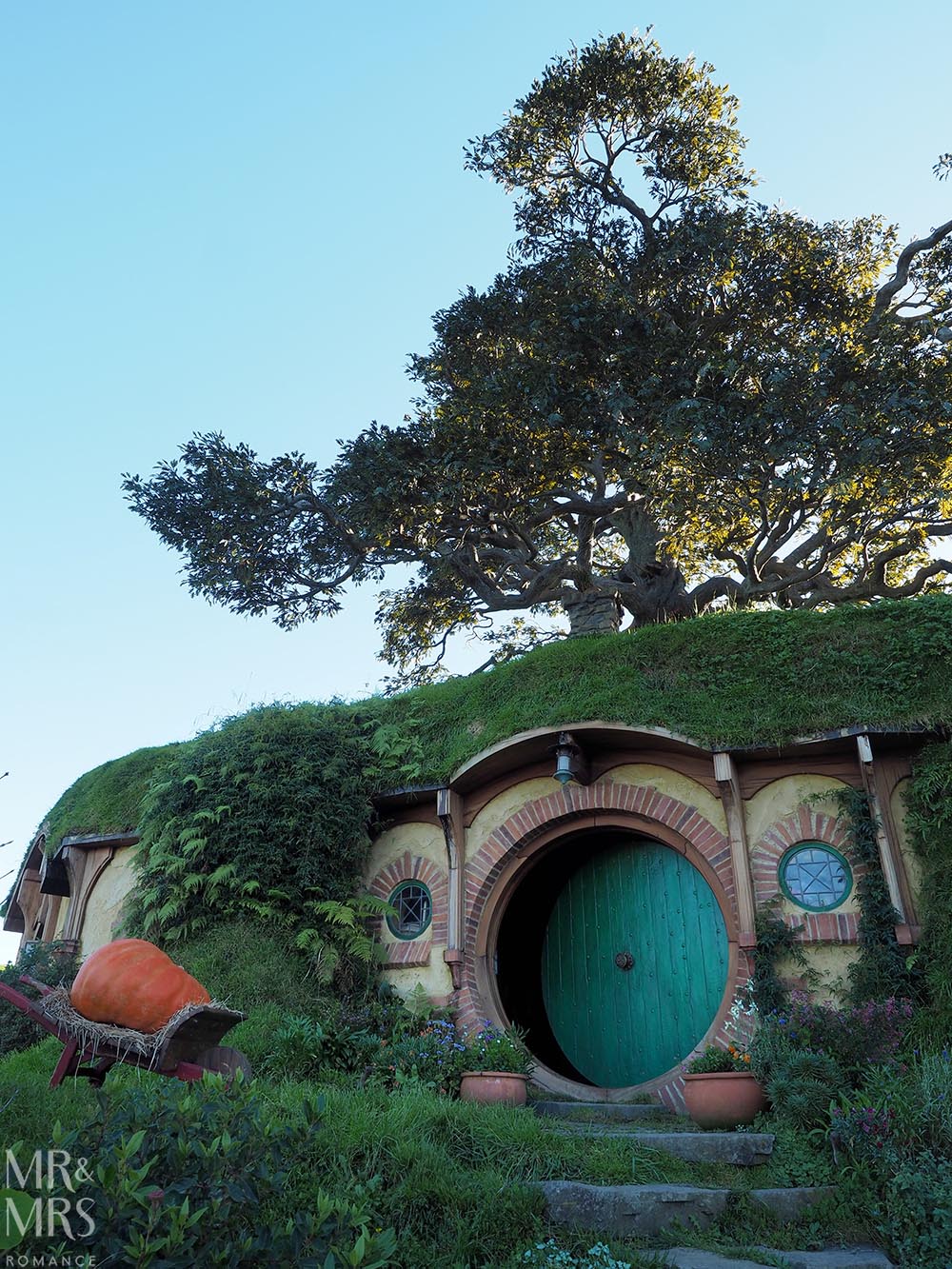 The reason this tree is so impressive is because it’s not real. The trunk is made from metal wire, fibreglass and paint, and the tens of thousands of leaves – each made in Taiwan – are silk.

But when the leaves were attached to the tree, Peter Jackson decided they were the wrong colour, so they had to be removed, painted and reattached.

There are countless stories about the making of The Hobbit and The Lord of the Rings that you learn about on the tour. It’s so interesting. 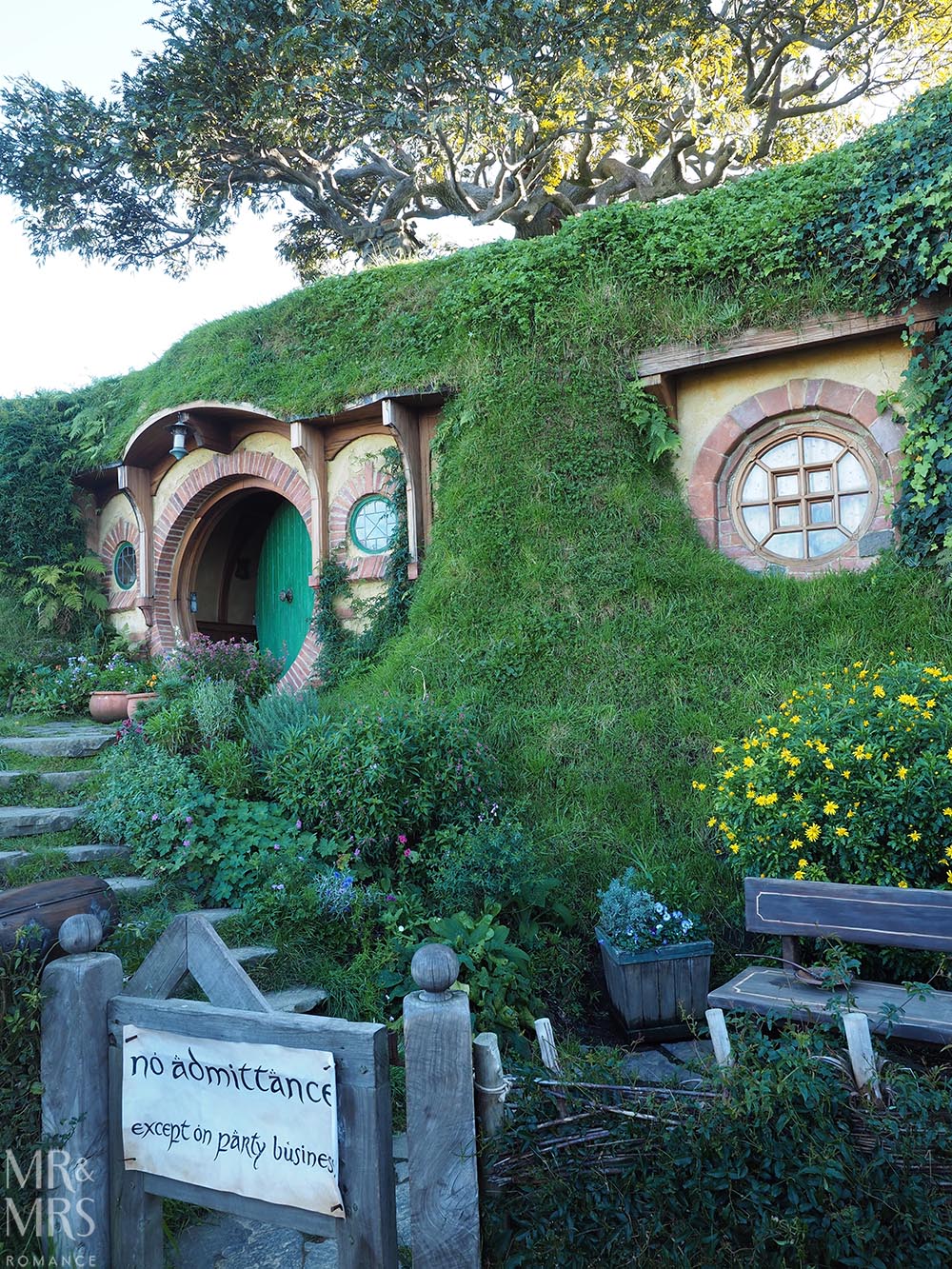 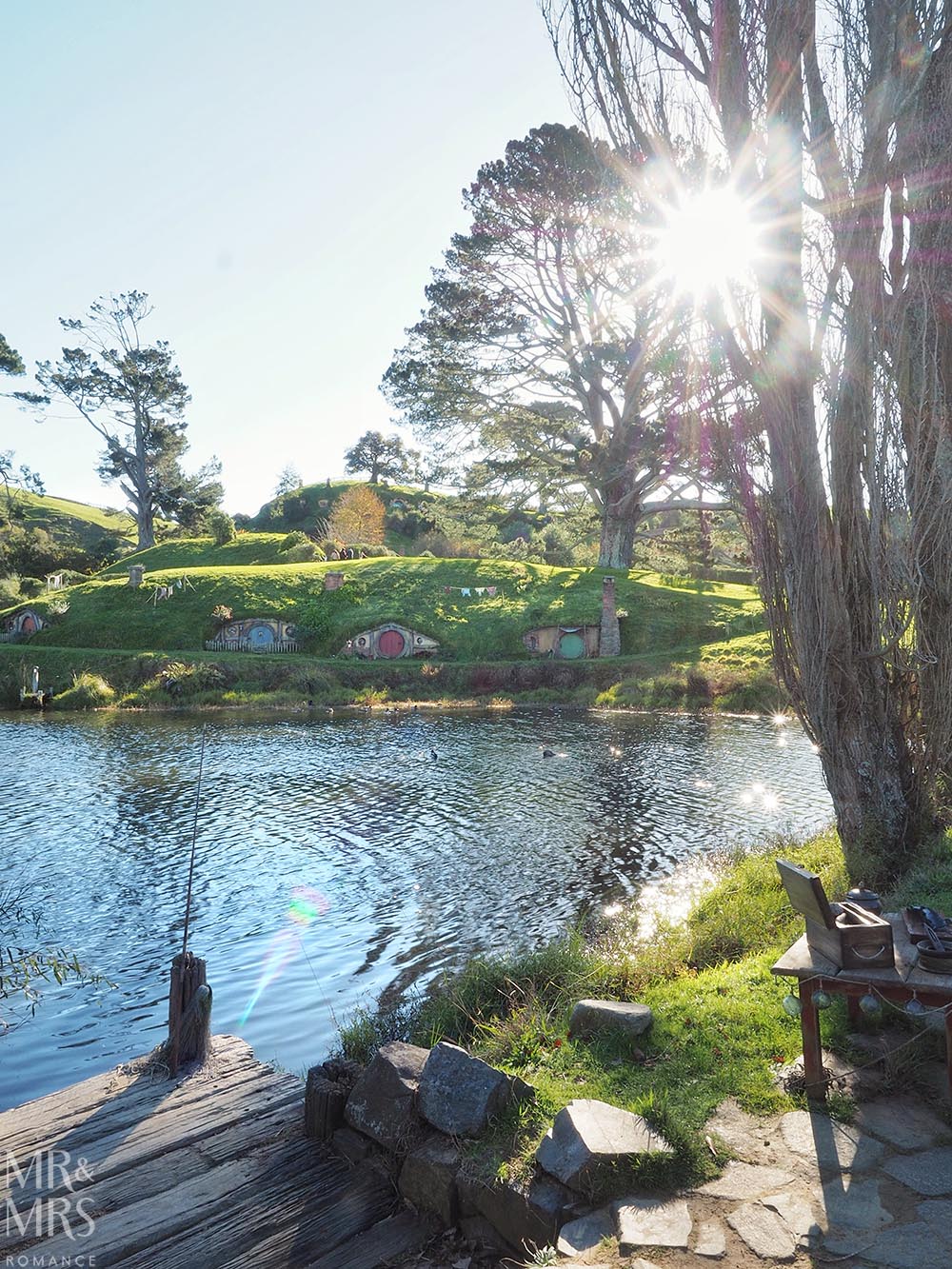 What about second breakfast?

When the tour finishes, you stroll along the little pathways back across the bridge towards the Green Dragon Inn.

This is a fully functioning pub with food on offer that is probably worth holding out for instead of paying the extra for the tour-meal combo.

Beef and ale pies, pork pies, ploughman’s sandwiches, cheese plates, scones – this was more like what we were expecting from the meal at the beginning. 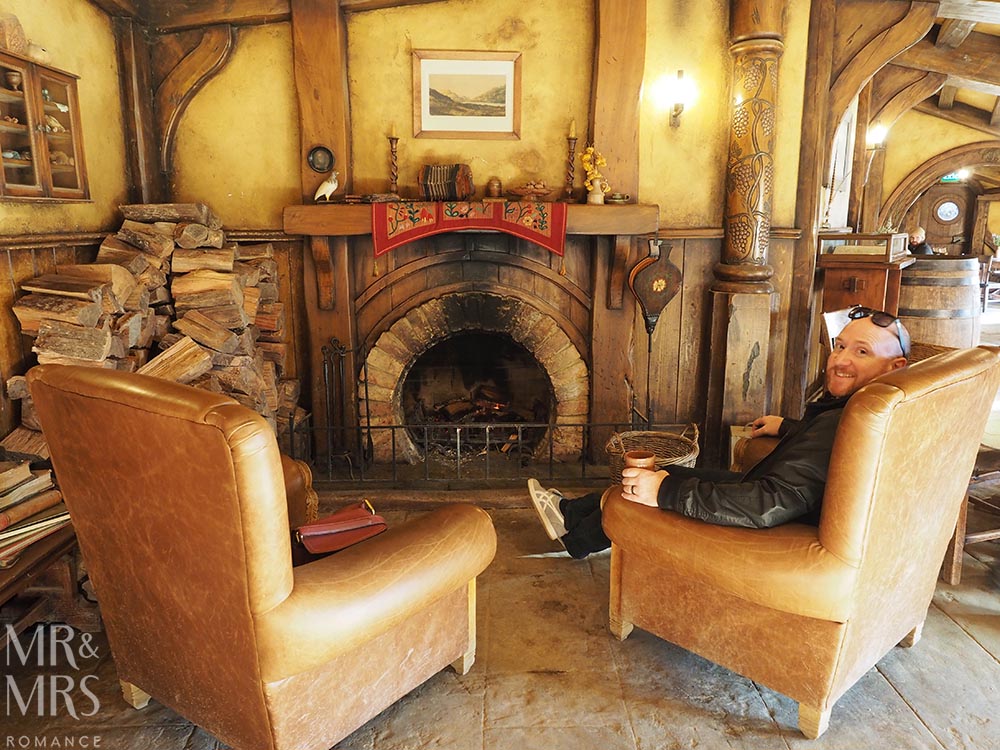 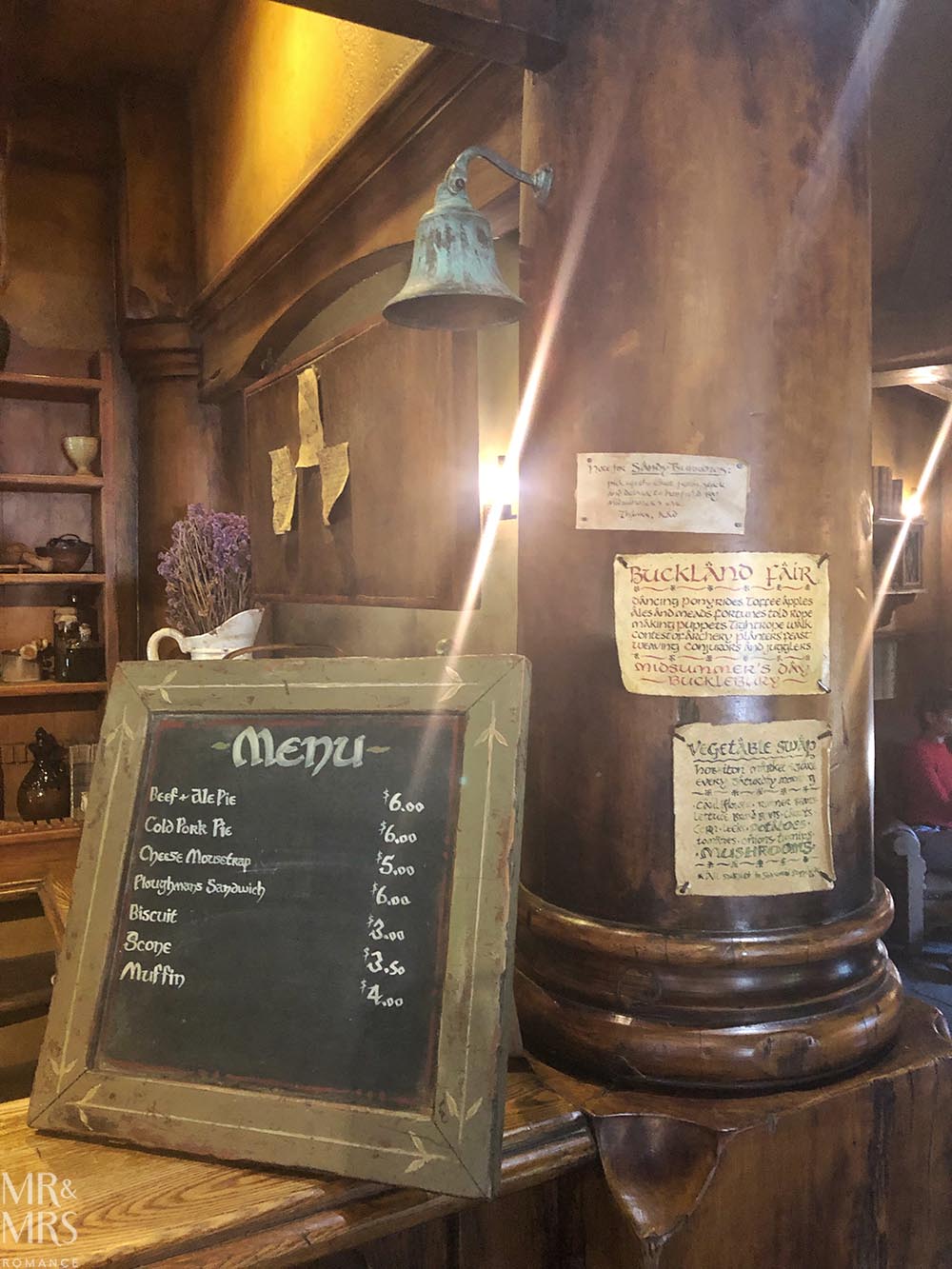 The inn was definitely one of the highlights of the tour, with as much attention to detail inside as the rest of the set. Your tour includes a drink at the pub – either one of the two ales they have, a cider or a non-alcoholic ginger beer.

Then you just find a place to sit, enjoy the funny music and do what hobbits do best!

The Green Dragon Inn is said to be the busiest bar in New Zealand, which I can well believe. The good thing is – because of the structured way people visit Hobbiton – it never feels that busy. And there’s always the option of having another beer if you like. 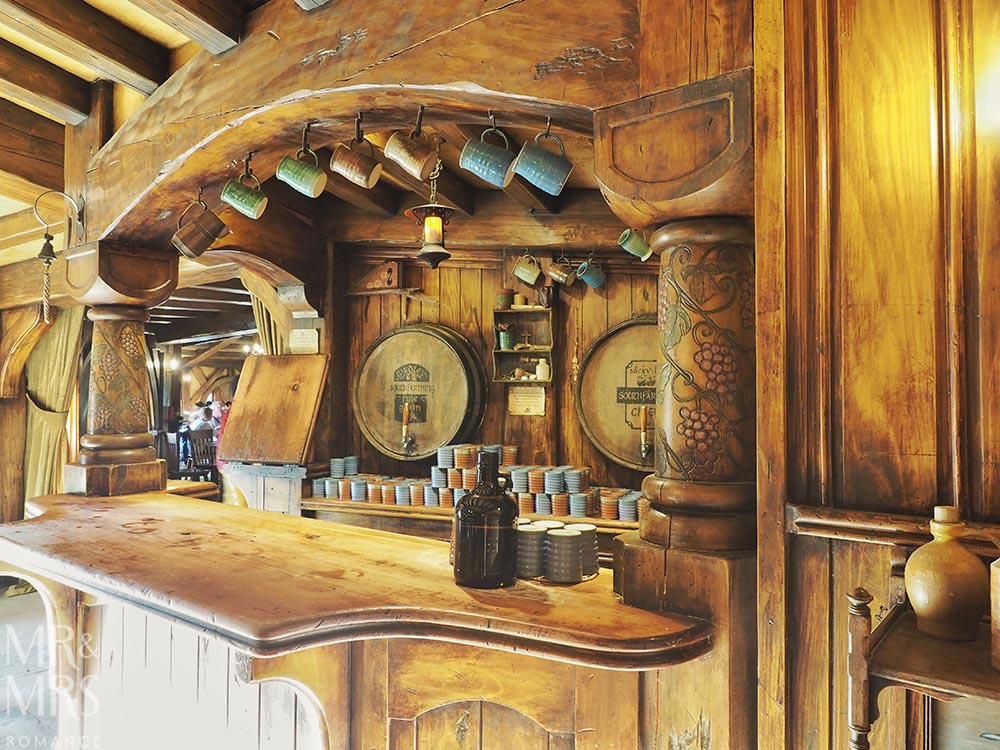 The beer is all brewed specially for Hobbiton by Good George Brewery in nearby Hamilton. Good George is well worth visiting – here’s our full review of the brewery.

All too soon, our guide was rounding us up to step aboard the hobbit bus to take us back to the Shire’s Rest and our car.

You don’t have to leave once you’re there. You can enjoy the café and gift shop or explore the fields nearby. But remember it is still a functioning sheep farm, so don’t go too far!

How accessible is the Hobbiton Movie Set tour?

I suppose because this was originally built as a filmset, access for wheelchair users or those with limited mobility wasn’t a high priority when Hobbiton was built.

Add in the simple facts that it’s on a hill and supposed to be a rustic setting, and you get the idea that Hobbiton doesn’t have great access.

Having said that, there are plenty of areas at the Shire’s Rest and around the beginning of the tour that would cope with a wheelchair, and I’m certain the staff here will be able to advise and help.

But narrow, muddy, rocky paths and some steps may mean limited access to the whole set. 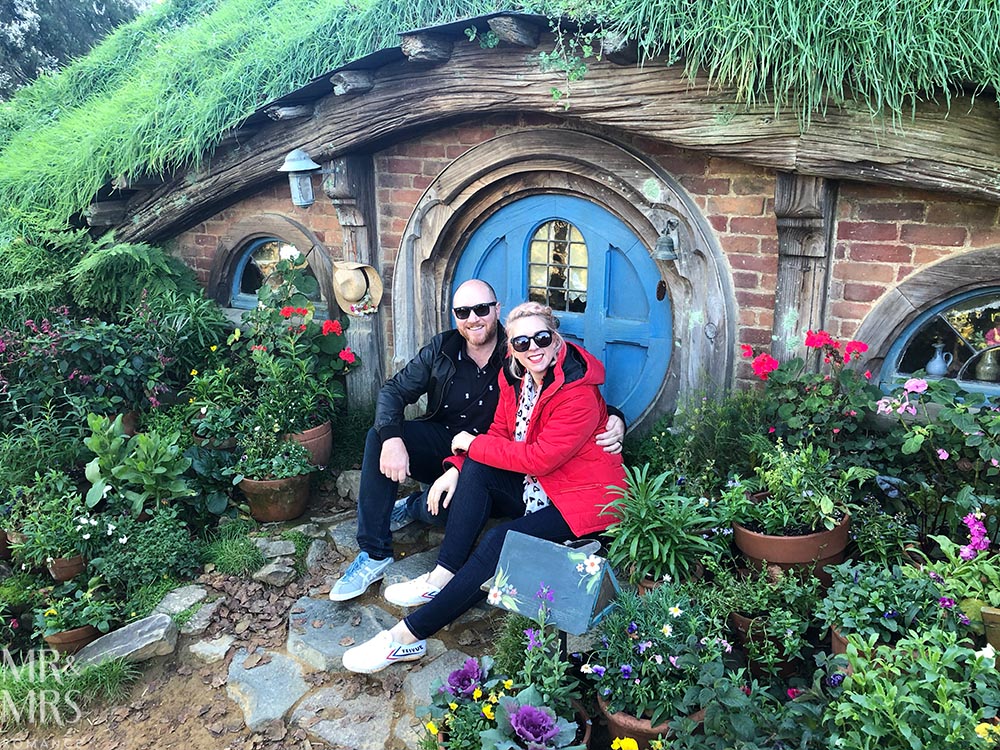 Hobbiton is well worth a visit, whether you’re a LOTR or Hobbit fan or not. It’s part of what makes Waikato and New Zealand such a magical place to see.

Day 8 of our 30 Cocktails in 30 Days Challenge: the Daiquiri It’s funny – we put off making this cocktail for as long…