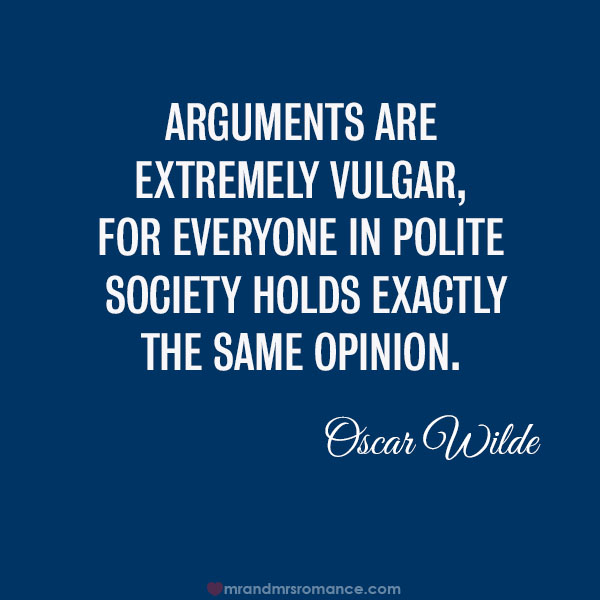 My mum always said arguments we have with our loved ones are nearly always 10% about what’s just happened and 90% about something that’s happened earlier.

I think that’s pretty much spot on. Mrs Romance and I have been together for quite a long time now (half our lives in a few years, in fact), so we’ve of course we’ve had the odd row or two. It’s so easy to get caught up in the moment, of what is usually just a game of one-upmanship, it’s hard to take that step back and think about why you’re having this ‘heated discussion’.

We’ve learnt it’s so important to ask the question ‘why are we arguing?’ or just a simple ‘what’s the matter?’ The truth of the problem often shows itself then.

Mrs Romance is very good at arguing. She becomes very calm and relies on her amazing memory and logic to find weaknesses in my point, categorically break it down and prove me utterly wrong. It’s infuriating.

I, on the other hand, have always been quite hot-headed and will launch into a rant at any given moment, which I’m sure Mrs R finds this amazingly attractive [nope]. My only defence against her amazing ability to be right all the time is to pick on one single detail that proves my otherwise flawed perspective valid and dwell on it.

It annoys her, which is the reaction we’re all looking for when we argue really, aren’t we? If the other person just says ‘no, you’re right,’ you feel robbed. You know they’re just placating you and taking that room with a view – the moral high ground, which is where you wanted to be looking out from in the first place.

The odd occasion where my point is valid, Mrs R has a talent of shutting down and going quiet. It elicits exactly the reaction she’s after!

Having said all this, when we do disagree, Mrs Romance and I always make a point of apologising to one another once we’ve both cooled down. Then we make sure everything’s okay and Mrs R tries to get me to talk about my feelings.

Most importantly we try never to go to sleep angry with each other.

It’s also okay to argue now and then. It’s healthy to have a difference of opinion and to feel comfortable enough with your partner to talk it out. But it’s also important to work through the problem and make the whole thing worthwhile and something you can both learn from.

Let’s face it. You can’t get along with someone all of the time.

I don’t think arguing is a bad thing. I’m quite sceptical of couples who say they never fight. Does that mean they never discuss anything important?

It all comes back to arguing well, and starting a fight for the right reasons.

Mr R’s mum, many years ago, gave me the best explanation for fights. She said that fights are 10% about the present situation and 90% about something unrelated from your past.

This has really stuck with me. I try to remember when a fight is getting big to take a step back and ask why we are fighting. Is it really about now, or is it something else?

But in real life, it’s often a much harder rule to put into practice. I’ll often start an argument over something small, like the dishwasher, when it’s really because I’m stressed about something completely unrelated, like my hair.

If I realise I’ve done this – as I did on Friday morning (which was the inspiration for this post), then I’ll reach out first to apologise. I hate to admit when I’m wrong, but it’s the only way to move forward.

Bringing someone else into your fight is never a good idea. Who wants to be put in that position? You can prep a friend to be on “your side” but it puts them in an awkward spot. Be a real friend and don’t make them do that.

Trying to “win” an argument with your partner is also a sign that you’re not going to get lucky later. If you win, they lose. You can’t be happy with making your partner feel like a loser.

So I guess I’m trying to say if you’re going to pick a fight, make sure it’s for the right reasons.

In the United Kingdom, where weird and ridiculous bye-laws are plentiful, there’s a town in Essex that still has a law whereby if a husband and wife can prove they haven’t argued once in a whole year, they are given a pig by the town council! Of course, no one’s ever won or claimed the prize.

What techniques have you been known to use to win an argument? Who usually gets the last word between you and your other half?

He Said, She Said: when your partner is away for work