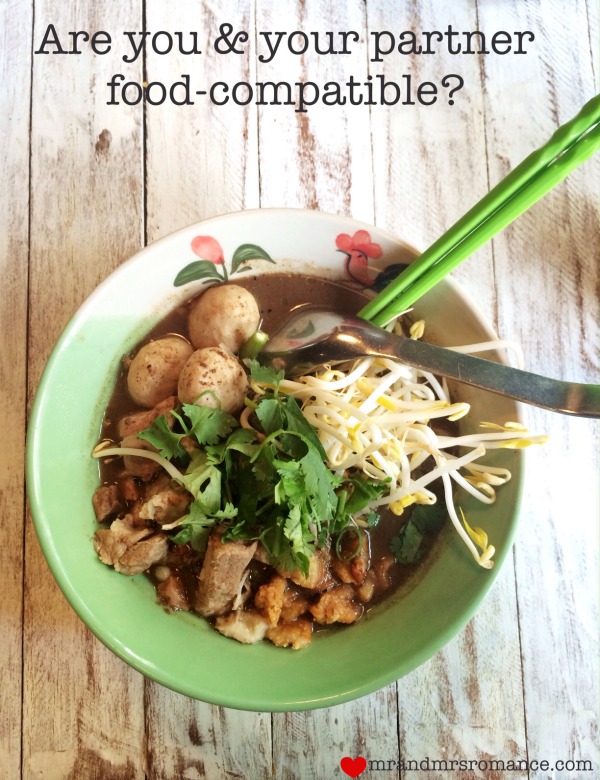 Your diets don’t need to match but your passion for food does.

In a way I wish Mrs Romance and I had a less similar taste in food. As I’ve mentioned before in my rant about picnics, sharing food isn’t high on my happy list. It’s not that I resent giving Mrs R a taste of what I’ve got. Far far from it. It’s just that I’m a greedy pig and want it all for myself!

For the most part, I think we are quite closely food-compatible. In restaurants we’ll often be eying up the same things.

I suppose that’s to be expected though. We’ve been together for almost 14 years now. There’s always going to be a bit of melding over that kind of time period. I sometimes wonder if we’ll wake up one morning just one body, and two heads, two arms and two legs.

But there are a few differences that set us WAY apart.

When it comes to looking through menus, Mrs R heads straight for the desserts list and plans her entrée and main course from there.

I, on the other hand, agonise over the main courses and then, if I have time, glance at the prices of the scotches and cognacs. And maybe the cheese plate if there is one.

Coming from a cold country, I have an innate love of comfy foods. I’m a huge fan of the most useful of vegetables – the potato. Mrs R really doesn’t care for them in any format other than gnocchi thanks to her Italian heritage (chips also get a let). She’s outwardly aggressive towards the humble mash.

Born and bred in Sydney, Mrs R loves South-East Asian food. She loves the fresh, sweet and sour blends of flavour and the lightness and delicacy of Thai and Viet dishes.

England, whose national dish is now officially Indian food, has taught me to lust after food from the subcontinent. I could eat a vindaloo three times a week if I could. I don’t mind Thai or Vietnamese food but it wasn’t really what I ate growing up.

In fact the sweet and sour versions found in the UK only came in the kind of orange found on the jackets of those working on road sites. It wasn’t great.

And since Mrs R has discovered she’s gluten intolerant, we’ve altered our diet quite a bit. No more bread in the house, which I found very hard early on, no more quick easy pasta dinners, and no more homemade pies as GF pastry is a massive pain to make.

It’s very interesting though, that, by and large, we’ve come to understand each other’s palettes. We’re now happy to eat whatever the other feels like.

I do wonder if two people can be together who have such different tastes in food that they can’t even go to the same restaurant. That must make it tough.

Food is a very important part of my life.

For me, trying new cuisines is one of the best experiences of travel. I’m not afraid to try anything, once, and I’m glad my partner feels the same. I would feel frustrated with someone who didn’t enjoy food adventures.

The only food issue I have with Mr R is that he doesn’t like to share food. A bit like Joey from Friends, he gets a little territorial and hates people trying food from his plate. He copes well with shared dishes at restaurants but he’s happiest when he orders what he wants and doesn’t share.

In recent times our diets have started to vary. I have developed some dietary intolerances so I’ve had to reluctantly adjust what I eat. Mr R has adapted well and doesn’t mind cooking a different meal for me.

Food compatibility is something you need to work out in a relationship. Your diets don’t have to be an exact match and sometimes opposites attract. My dad was Italian so lived to eat, while my mum mainly eats to live. However, she does appreciate good food and that’s where the compatibility lay.

How do you and your partner match up on the food-compatibility scale?

I am a fashion mediator!

Somehow I have become Mrs Romance’s dress sense guru. Me. As I sit with my warm-socked feet up tapping away on the laptop wearing…