Why would you want to go to a brewery? Why would you even bother? It’s just a smelly old building full of blokes talking about beer, drinking beer and making beer. Or is it? These days places like Murray’s Brewing Company offer a lot more than a cliché. And they’re not even all that smelly. 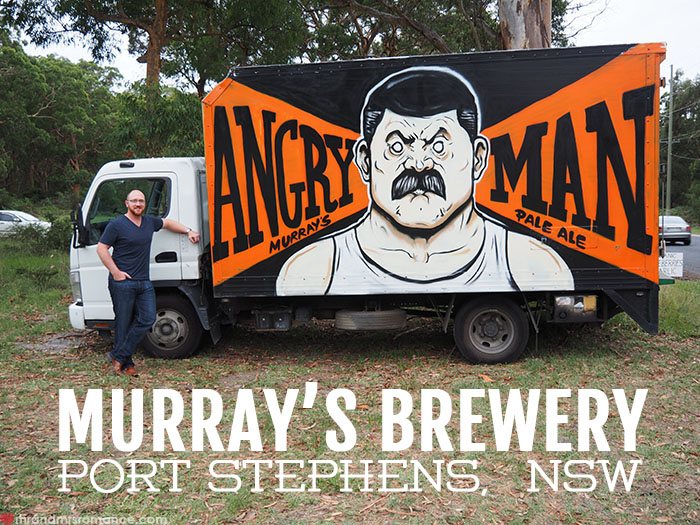 For me, there’s something about drinking beer from the brewery it’s made at. It’s a bit like drinking from a stream as it first emerges from the ground – or milk straight from the udder… actually no, that sounds gross, doesn’t it.

Let’s just stick with the ‘water at its source’ image, shall we?

But being able to sample beer at its very freshest, served with food that’s been made especially for that beer’s flavour – there’s not much that’s better than that. We’ve done it a few times – like this trip to San Diego’s amazing Stone Brewery.

And even better, you might even just find a brew or two that’s not available on the shelves of your local grog shop. A secret the brewery keeps under the counter to share with the patrons invested enough to come and visit them.

I suppose it’s a bit like visiting a winery – but at a brewery, people are just a bit gruffer. A little saltier.

You’d expect this to be especially true at Murray’s Brewery on the Nelson Bay Road, NSW. After all, their signature beer is called the Angry Man!

But behind the bar, the staff are friendly, patient and helpful. We visited Murray’s recently to see how they do things here. 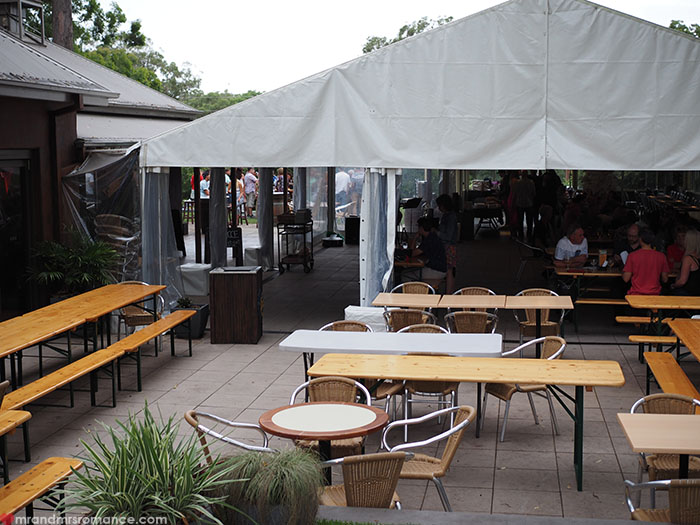 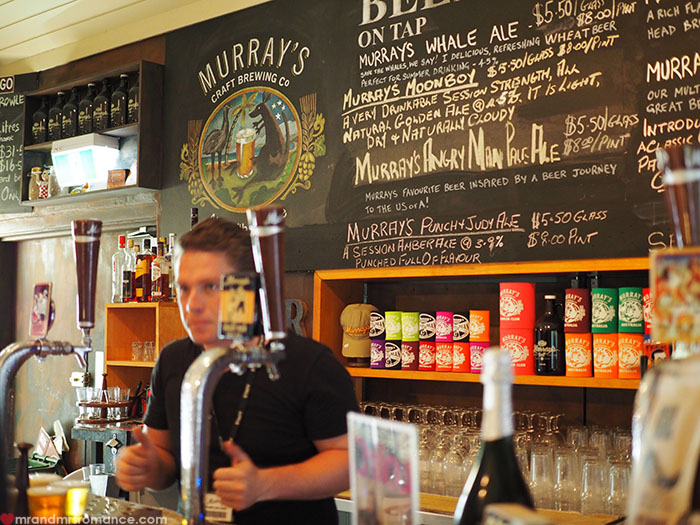 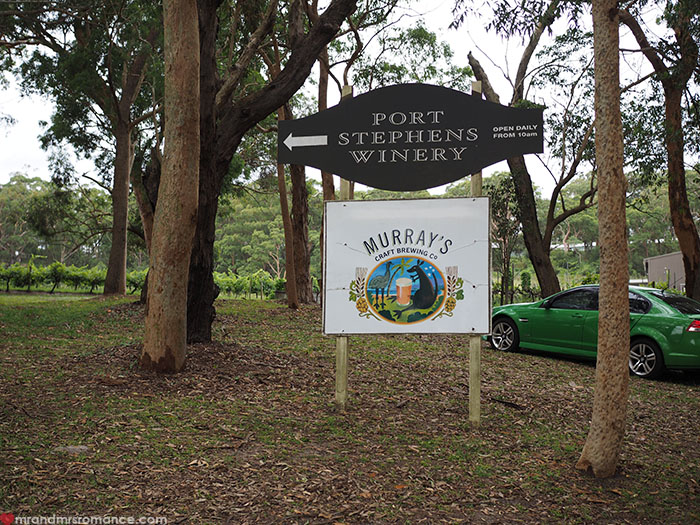 Set in the little-known wine country of Port Stephens, about 2 hours north of Sydney, Murray’s is a beautiful little spot with a big open-air dining room where people can sit and enjoy a feed and a schooner.

They also have a bit of live music here at the weekend.

I couldn’t decide which beer to have, so I ended up trying all of them in a tasting wheel. It ended up being pretty good value – and yes, I was able to taste a few beers I’d never heard of before.

The Whale Ale, Angry Man Pale Ale and Rude Boy Pilsner are favourites of mine, but all the others were all new and exciting. 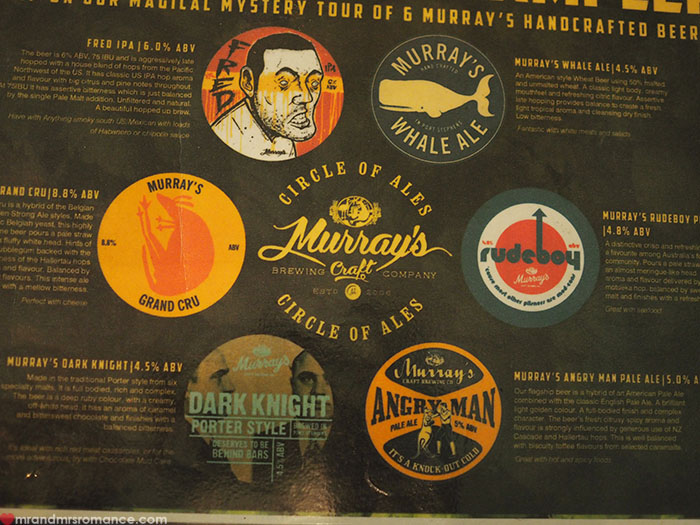 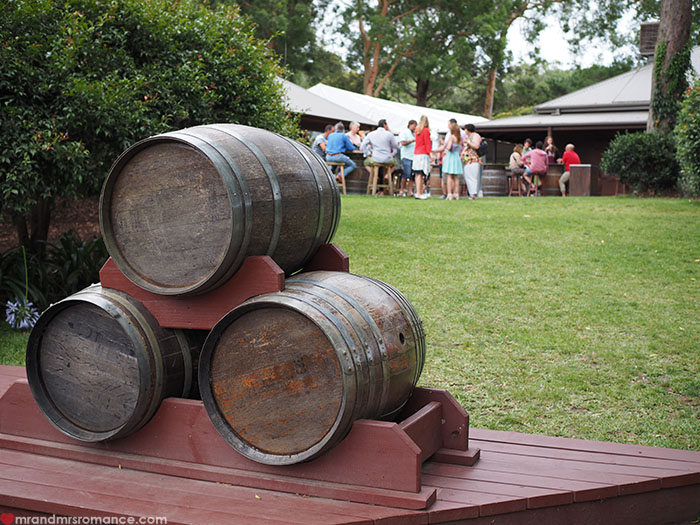 For food, we really explored the menu. Our nephews hoed into some of the woodfired pizzas, which looked amazing… but were gone faster than we could taste them!

Each pizza is matched with its ideal beer. There are also wine pairings on the menu too.

The rest of the family had an assortment of goodies like the chilli salt squid (amazing) paired with the Murray’s Moon Boy Golden Ale, the fried 7 spice chicken wings (with Fred IPA) and the lamb salad (with Rudeboy Pilsner).

I just had to try the Angry Man “Man Burger”. It’s there on our top ten burgers list, and so it should be. It was a thing of beauty. And it’s the first time I’ve ever agreed with the strange Australian fascination with putting beetroot on a burger.

For some reason it works with this one. 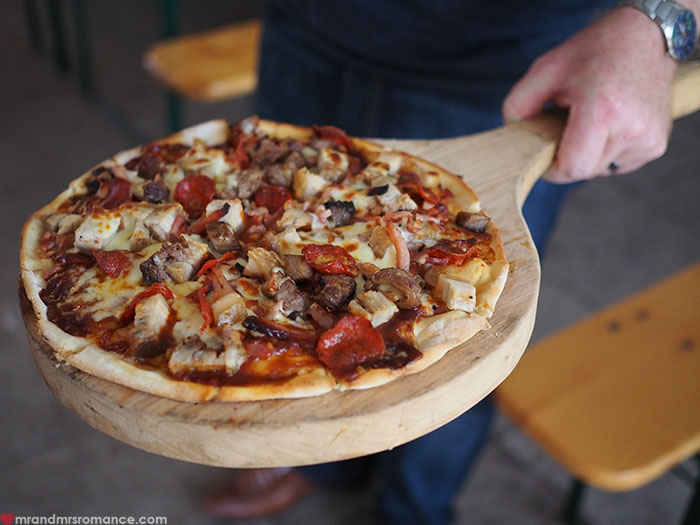 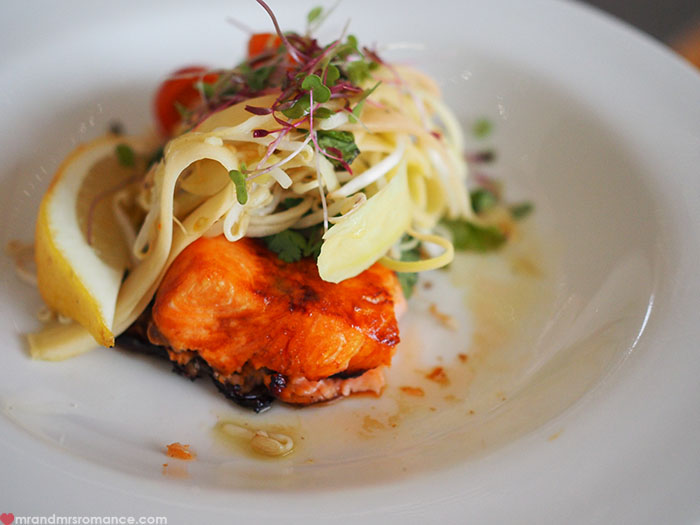 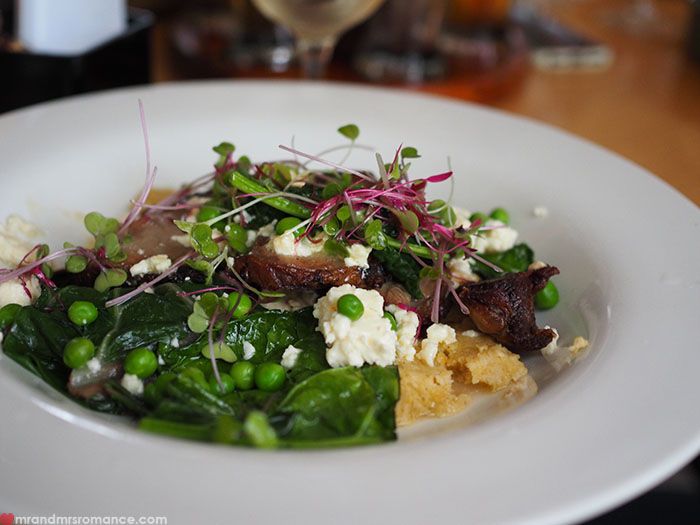 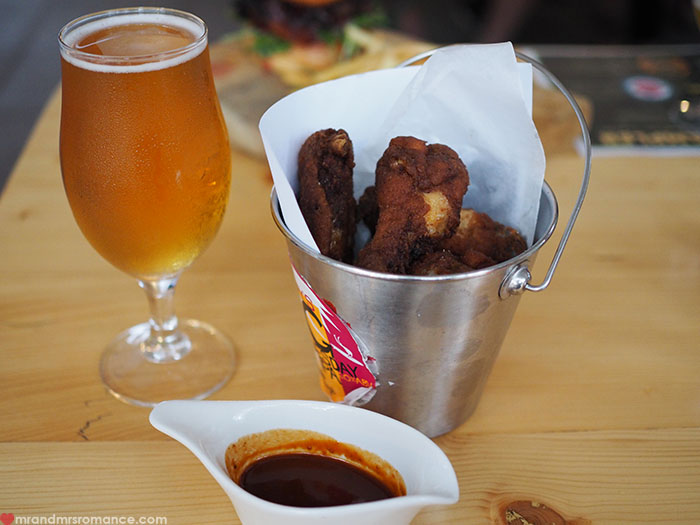 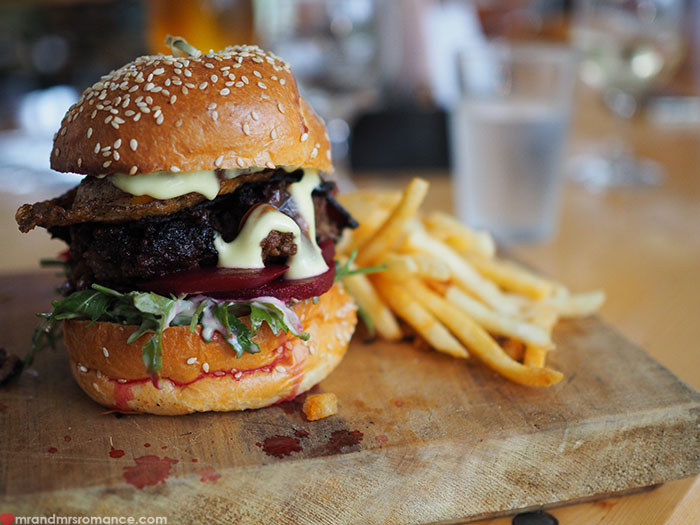 After our meal, we threw a Frisbee around for a while – there’s a box of toys in the field above the restaurant – and enjoyed the views over the grape vines and hops.

This really is a lovely place to come for a feed and a few drinks. There’s a great atmosphere here that’s perfect for big family get-togethers and parties. The setting’s ideal for a romantic dinner too though – great for a birthday present! 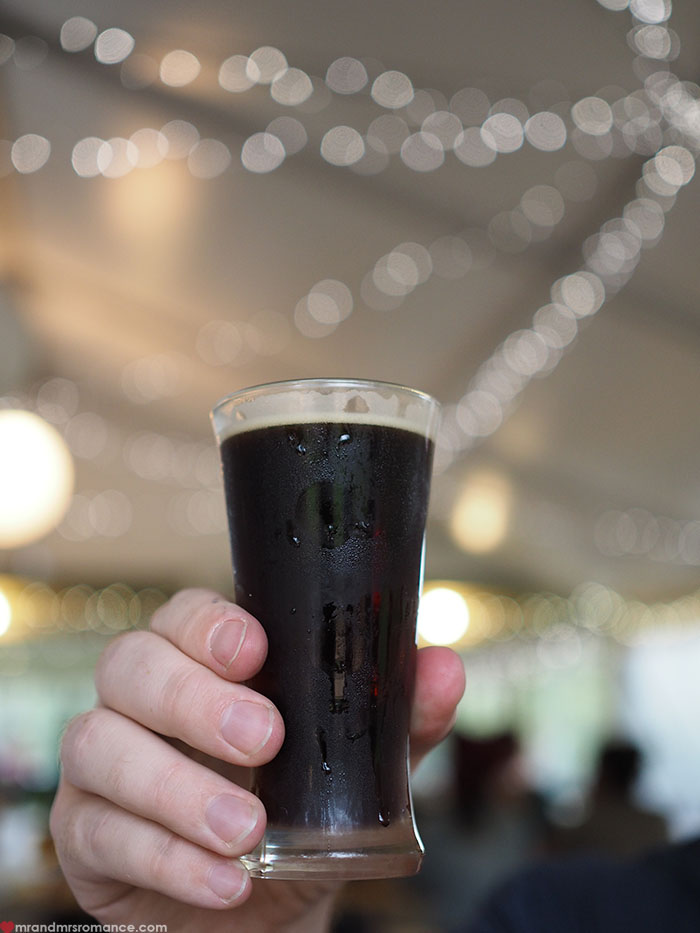 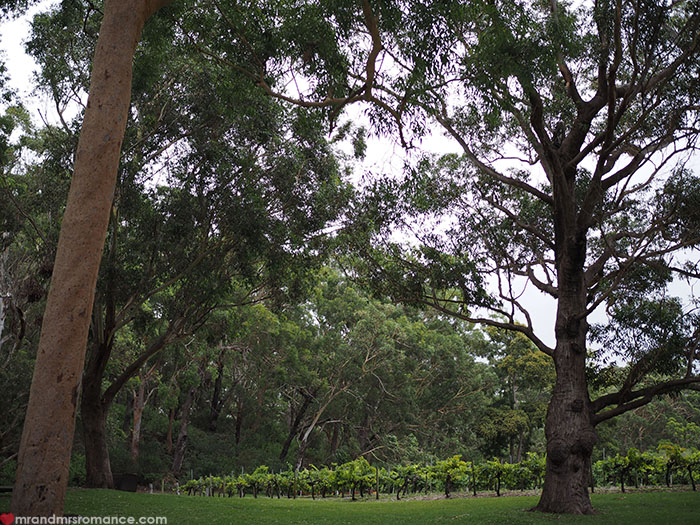 There are a couple of things we recommend you bring however:

1. your wallet. It’s not cheap here. Even though it’s where the beer’s made, you still have to pay the OTT alcohol taxes and the drinks are regular prices. The food – as always seems to be with breweries – is also quite pricy – it was certainly the most expensive burger I’ve ever eaten!

2. mosquito spray. As soon as you’ve enjoyed that gorgeous sunset, out come the blood-suckers in their droves.

If you’re here at the weekend, there’s even a shuttle bus to take you from your digs at Nelson Bay to the brewery and back – no designated driver needed! 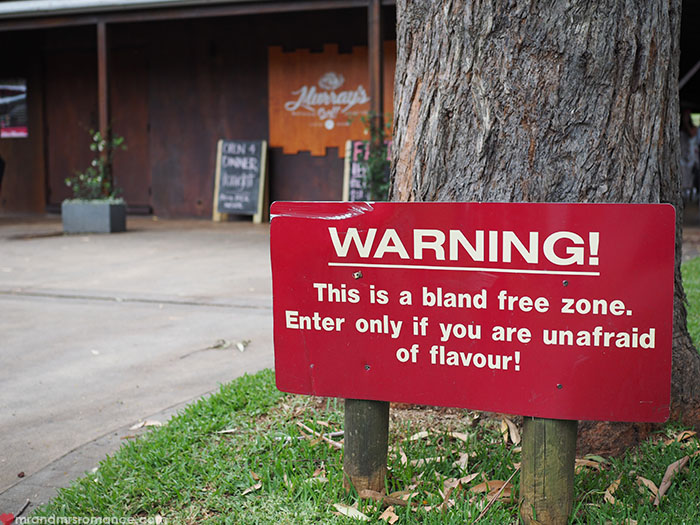 Would you ever go to a brewery for dinner? What’s the most you’ve paid for a burger? Can you think of a better expression than my udder analogy? Please? Anyone? Tell us in the comments!

Crispy with a soft tender middle, puffy yet robust and packed with flavour – here’s a simple pizza dough recipe that you can make…