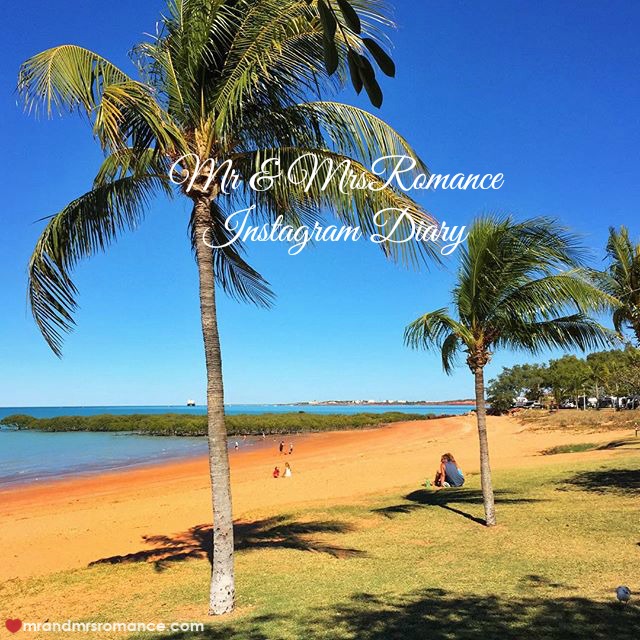 You know how they say sometimes you’ve got to take the rough with the smooth? Well this is a particularly smooth bit we’re having at the moment.

As you might remember, we’re away in northwestern Australia at the moment. We’re visiting a remote area of WA called the Kimberley, which is pretty much the most remote part of the Australian coast you can find.

Why are we here, you might ask. Well, we’ve wanted to come to Broome, which is one of the most northwesterly towns in the state. It turns out our friend Rohan, who works aboard an exploration ship for National Geographic, has managed to get us last-minute quarters aboard The Orion.

So here we are in tropical Western Australia enjoying the warm weather in Broome while we wait to board our ship. See what I mean about it being a particularly smooth patch?!

As I said, we’ve always wanted to go to Broome. It’s been on our list for absolutely ages. This desire to come here has been strengthened even more by the fact that there’s a brewery here!

Matso’s makes some amazing beer as we’ve already written about in our feature on Matso’s last week.

They also do some great food at Matso’s. My pulled pork burger is just about the best thing I’ve eaten so far here. Goes perfectly with my IPA! 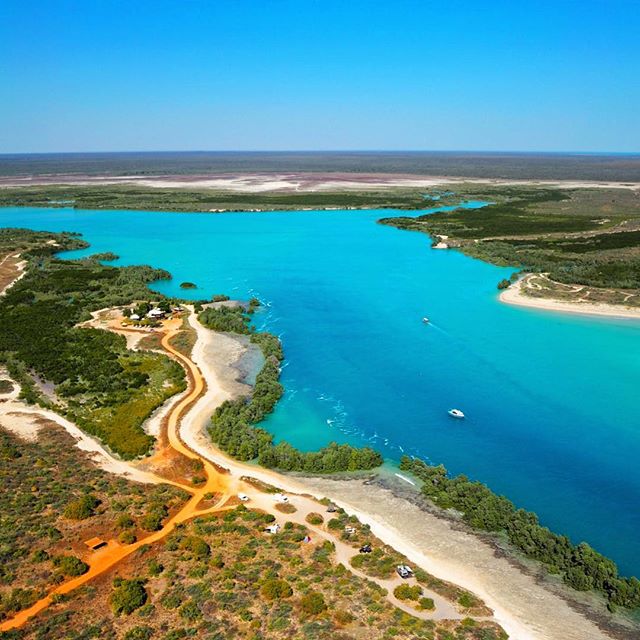 So we’re almost ready to go aboard the good ship National Geographic Orion for our 10-day voyage exploring the Kimberley. But before we go, we’re on a tour of the Willie Creek Pearl Farm just outside Broome.

It’s a beautiful spot with some amazing pearls. But the real pearl for us is that we’re on a helicopter ride for a view out over the creeks and rivers flowing down into the Indian Ocean.

The perfect mix of the bluest water and the cobalt skies mix supremely with the white sand, the deep red earth and the green of the bushland. Such a great experience. 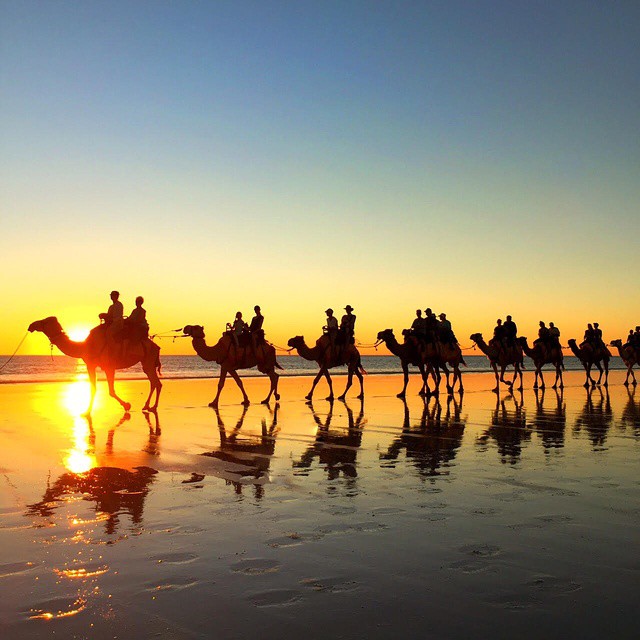 We’re so glad we’ve got to visit Broome. It’s a very special place – a little on the pricey side, but well worth it. Especially when you get to see things like this. The camels that trek along the shores of famous Cable Beach at sunset are one of the true icons of this side of the country.

We’ve not been able to go on the ride ourselves as it’s already booked up for the sunset ride, but I think this photo makes up for it. 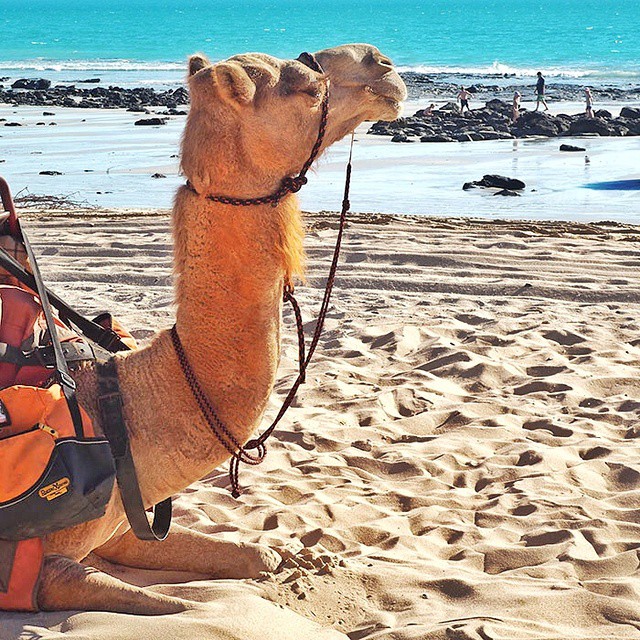 In truth, we’re kind of ok with not going on a camel. They’re really well treated here in Broome and they don’t seem to mind people riding them. We’ve found out that each of the three companies that run the tours have around 70 camels each, so they’re not out non-stop. They’re rested.

But in spite of their regal expression, camels stink pretty bad, so unless you’re walking up-wind and you’re at the head of the train, you’re going to cop it pretty bad.

They’re surprisingly photogenic though, I must say. 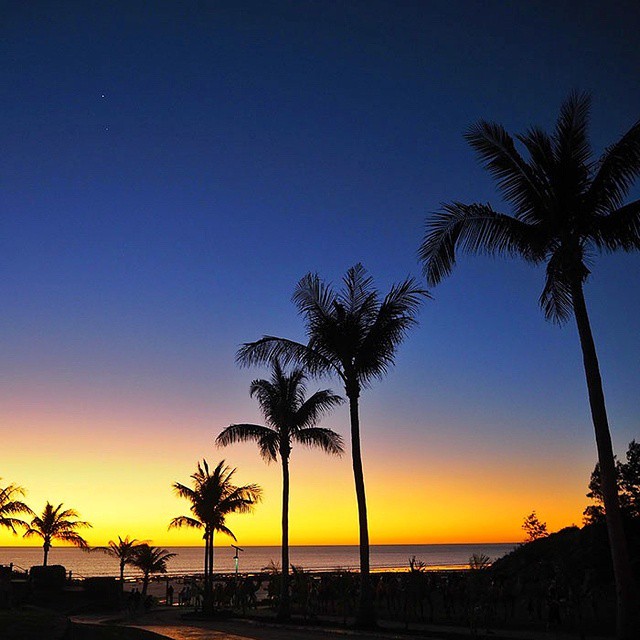 The sunsets at Cable Beach really are amazing. There’s something about watching the sun disappear over the ocean that’s just so rewarding; so romantic.

The sunsets here in Broome seem to last forever. And if you can score a spot at the Cable Beach Sunset Bar, you get to enjoy this view with a nice cold drink in your hand. Things don’t get much better than that, do they? 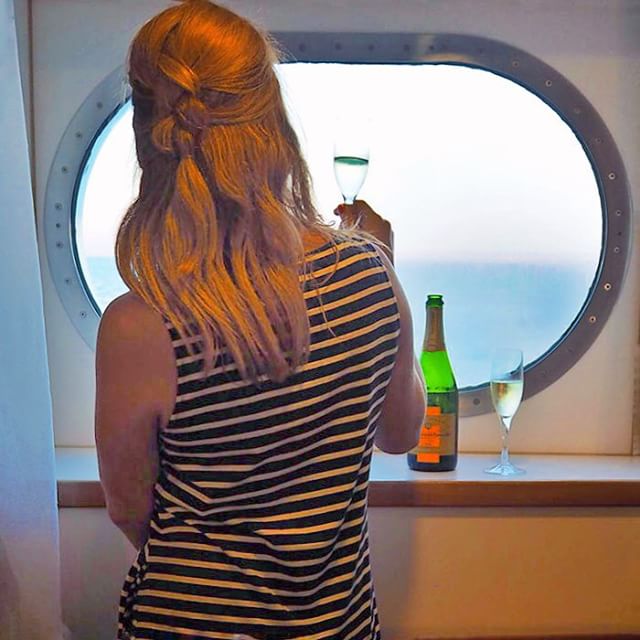 I’ve been wondering what our quarters will be like, knowing that space on a ship is at a premium. It turns out we’ve got quite a bit of space. Even better, our mate Rohan has organised to have a bottle of Veuve waiting for us in our cabin!

Mrs Romance is… excited. Especially because this will be the first time she’s ever slept on a boat before. 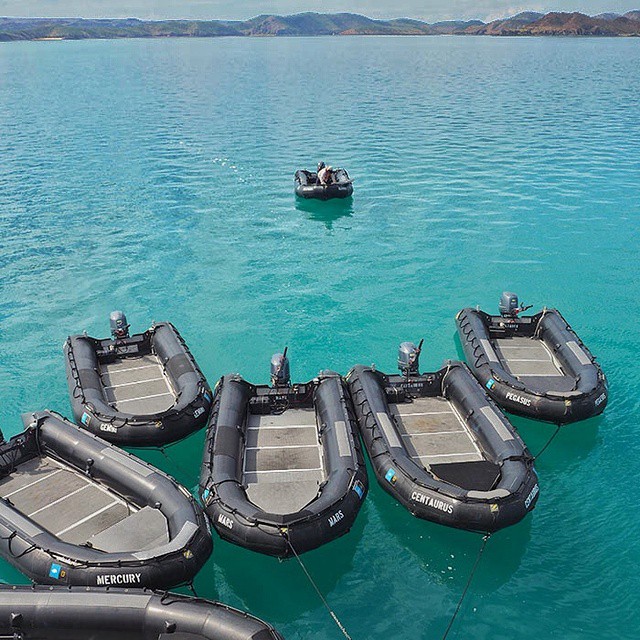 So the way our voyage works is each night our captain sails the ship to a new location along the coast. Then throughout the day us and the 100 other passengers aboard climb into these zodiac tenders.

With the guidance of one of the naturalists in the crew in each zodiac, we explore the area of coast looking for wildlife, geological formations and any archaeological aboriginal sites.

It’s a great way to get around – especially when the water looks like this. It’s just a shame we can’t swim here. The number of sharks and estuarine crocodiles in the area is quite high.

It keeps you from falling out of the boat though. 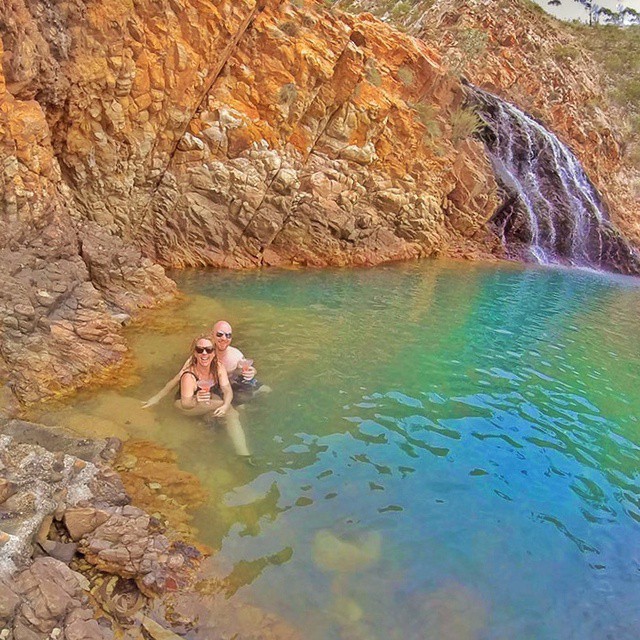 One of our first stops is here – at Crocodile Creek. Ironically, this pool and waterfall is too elevated for crocs to be able to climb in that easily, so it is safe to swim.

Best of all, as we get to the top of the ladder leading to this pool, we find the crew has set up a little makeshift bar serving margaritas!

The drink is the perfect finishing touch to this amazing pool, with it’s beautiful waterfall, the red of the rocks the blue of the brackish pool and the hot sun. 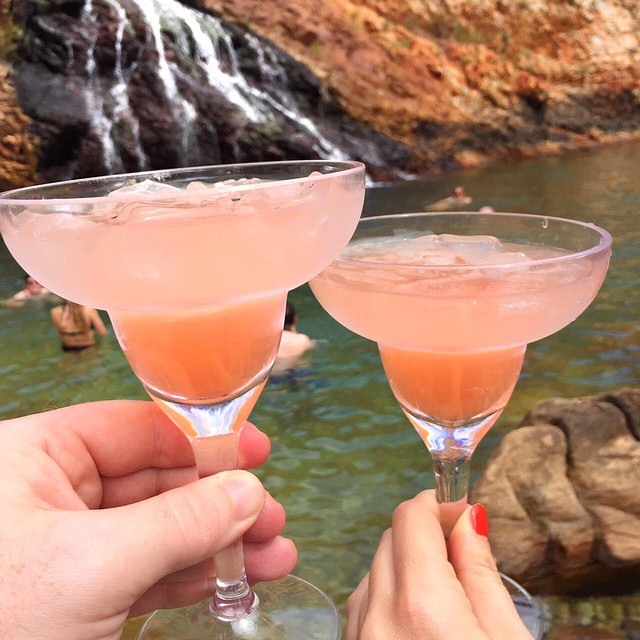 Time for a refill! These drinks are going down far too well. I don’t think we’ll be getting much more exploring done today! 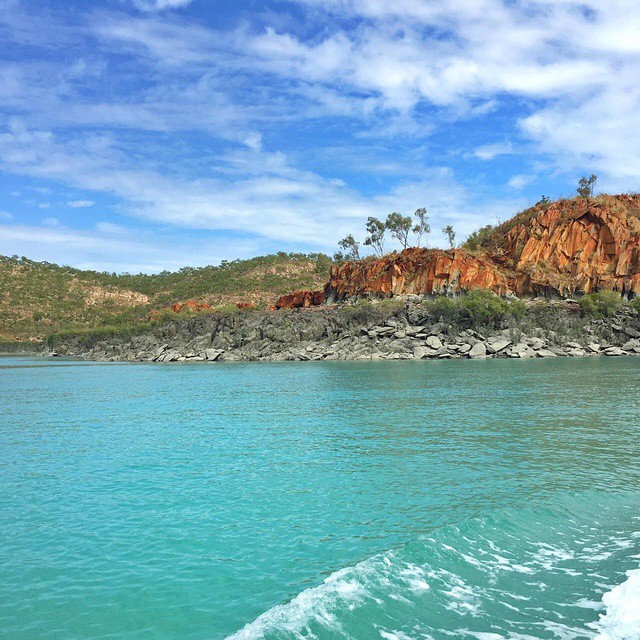 The ever-changing colours and shapes of the Kimberley coastline are so incredibly beautiful. From the low angle we get aboard our zodiac, we get to go up so close and personal.

Our naturalists are so knowledgeable we’re getting to really understand how these 1.8 billion-year-old sandstone cliffs and bluffs were formed. It’s a fascinating story. 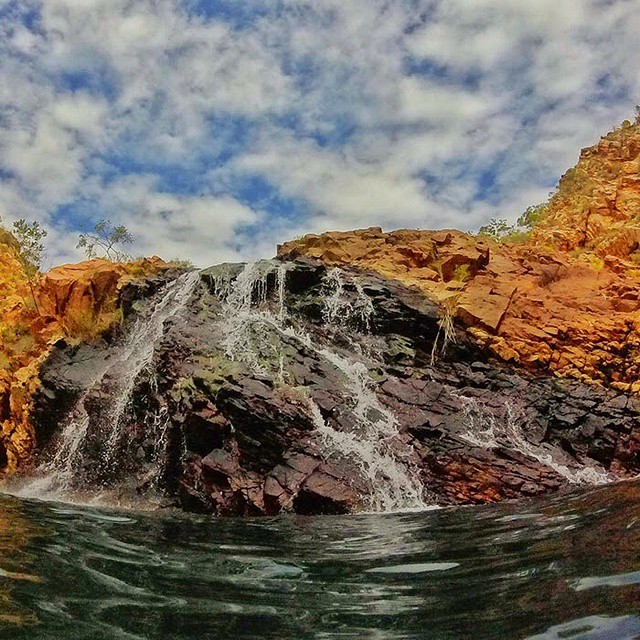 This waterfall at Crocodile Creek is just stunning. It’s only accessible by boat – or if you jump out on a plan I suppose. It’s just the most stunning place. Very special.

One of the naturalists, Adam, has taken our GoPro down to the bottom of the pool to shoot what’s down there. He says there’s a large jellyfish at the bottom and some small fish too. Looking forward to checking it out when we get back to the ship.

We can’t wait to share more of our journey to Darwin with you as we go. We hope you’re enjoying what we’re showing you.

Have you ever been to Western Australia’s outback? What’s the most remote place you’ve ever visited? Tell us in the comments!

Sydney has officially entered full-blown silly season mode! It happens every Christmas, but it always takes me by surprise.  Shops are crazy, bars and…