Surely there’s nowhere better to learn how to shuck oysters than on the shores of one of the world’s finest oyster regions. We travel to the Sapphire Coast and Broadwater Oyster Farm on Pambula Lake in southern NSW to get our shuck on. 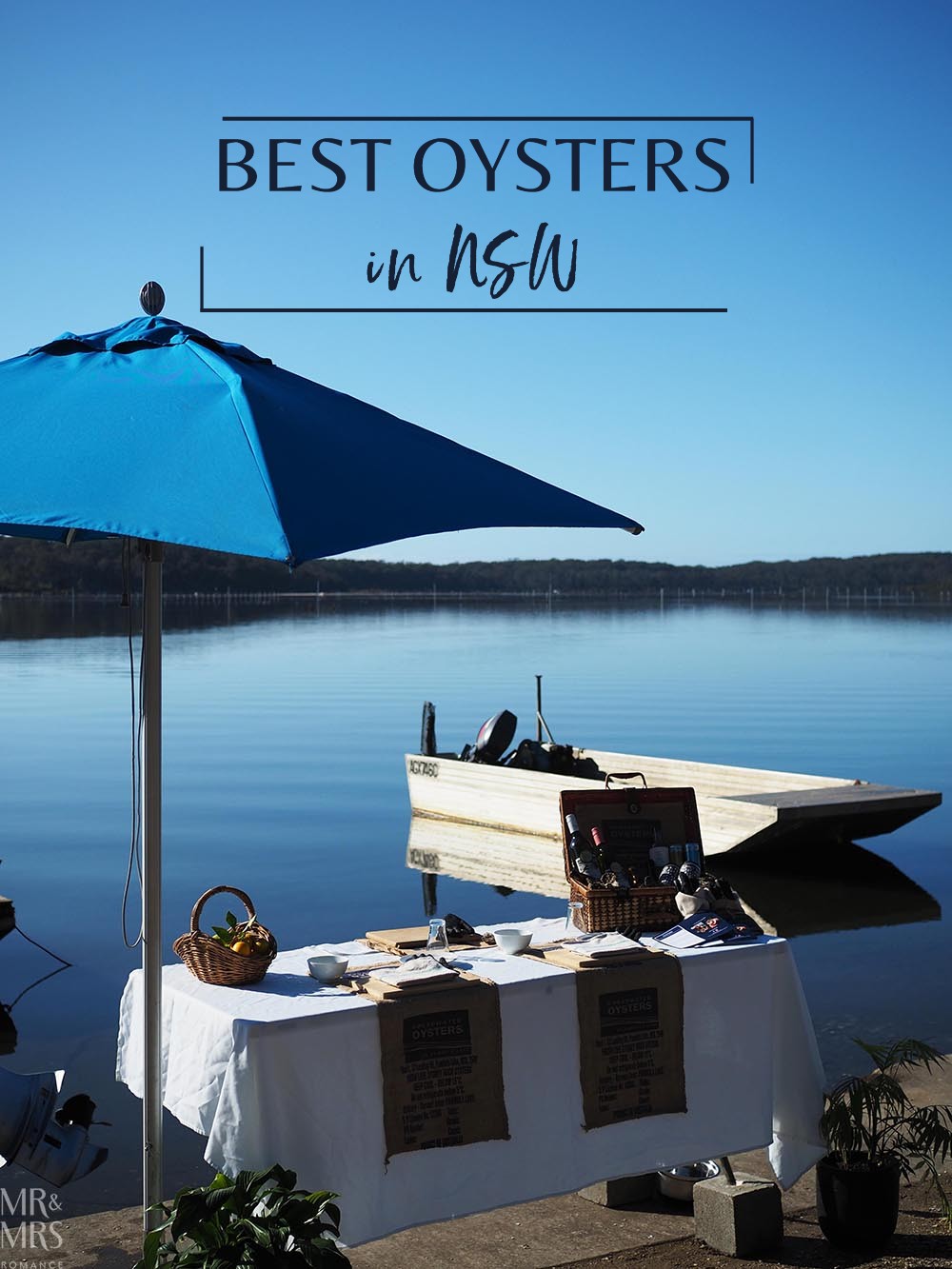 Not far from the southern border of New South Wales, the extraordinary waters of the Sapphire Coast produce the best Sydney Rock Oysters in the world.

And renowned Broadwater Oyster Farm, a family business that’s been cultivating these oysters for over 20 years, show us how to shuck.

Check out our video of Pambula Lake, Broadwater Oyster Farm, and our shucking and tasting class here.

We pull into the carpark close to the row of fishermen’s sheds that line the wharf looking out over Pambula Lake. It’s a ravishing vista; the dead flat sheen of the pearlescent lake hemmed by trees and fronted by a little harbour.

At their moorings, flat-bottom oystercatcher launches slow-dance with their shadows that sway in the lake’s crystal depths.

This is what we were expecting when we first heard of the Sapphire Coast Oyster Trail.

Hidden in the towering branches of the gumtrees that grip the carpark, the pinging calls of bell birds haunt the ethereal panorama before us.

For a while, we just stand and look.

The occasional pelican cuts a V through the lake’s mirror, and an orange and piebald flash of oystercatchers—birds this time—zoom past, piping with pride at the view. 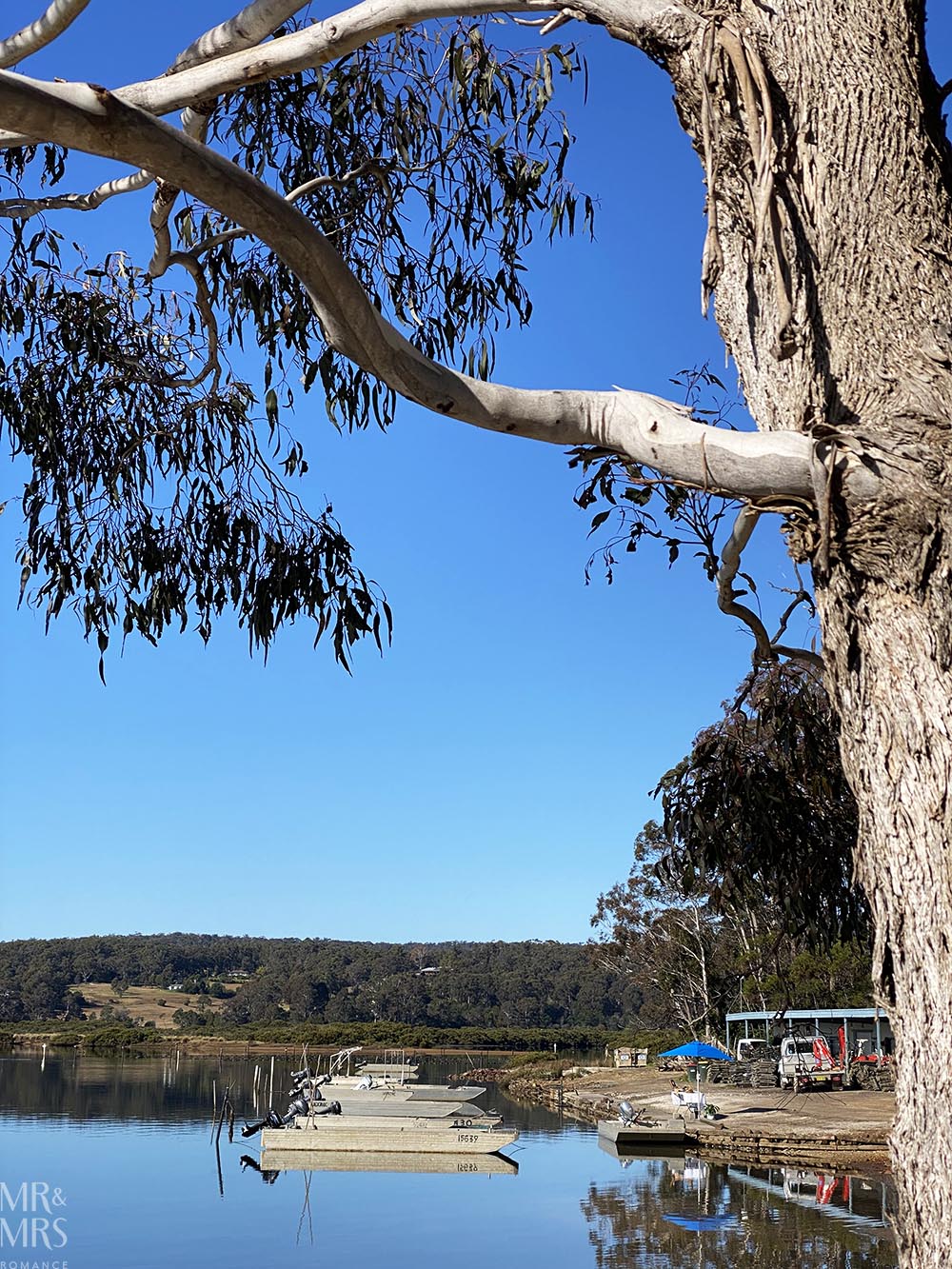 Promise of fresh oysters born and raised just metres from us draw us from our reverie. The school bell rings: our oyster shucking class is about to begin.

How to shuck oysters with Broadwater Oyster Farm, Pambula Lake

Travel is (or should be) always full of moments that stay with you forever. But there aren’t so many that provide you with a tangible skill as well.

Our classroom is a white linen-clad table right on the edge of the lake, where shucking knives, gauntlet gloves and tea towels await. 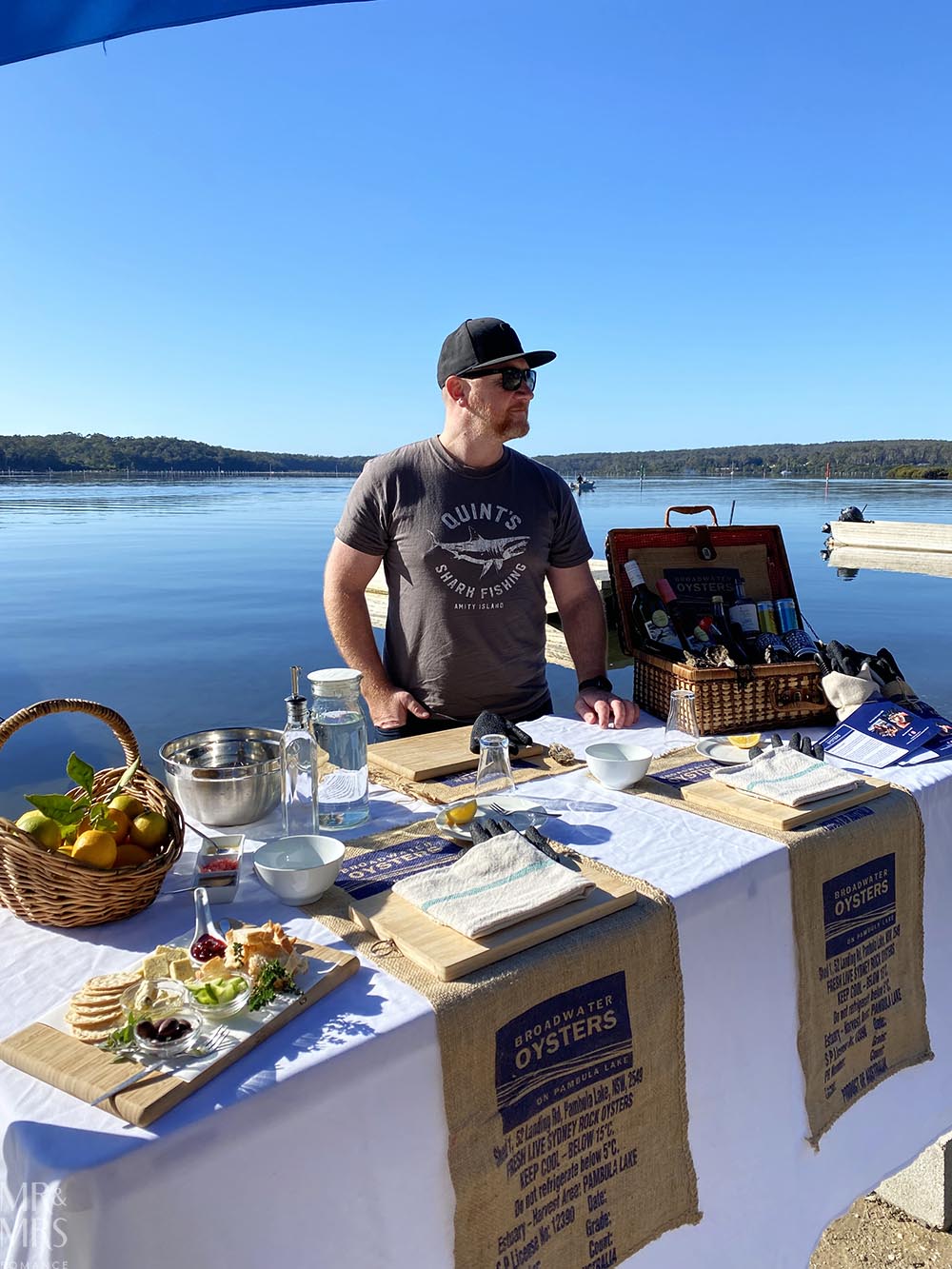 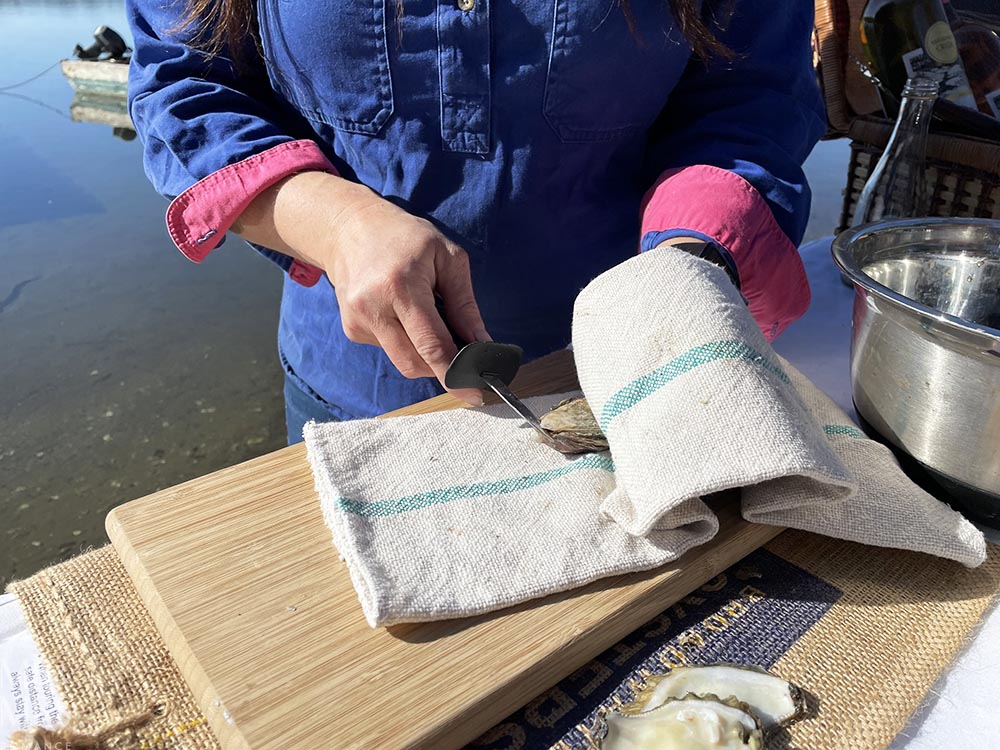 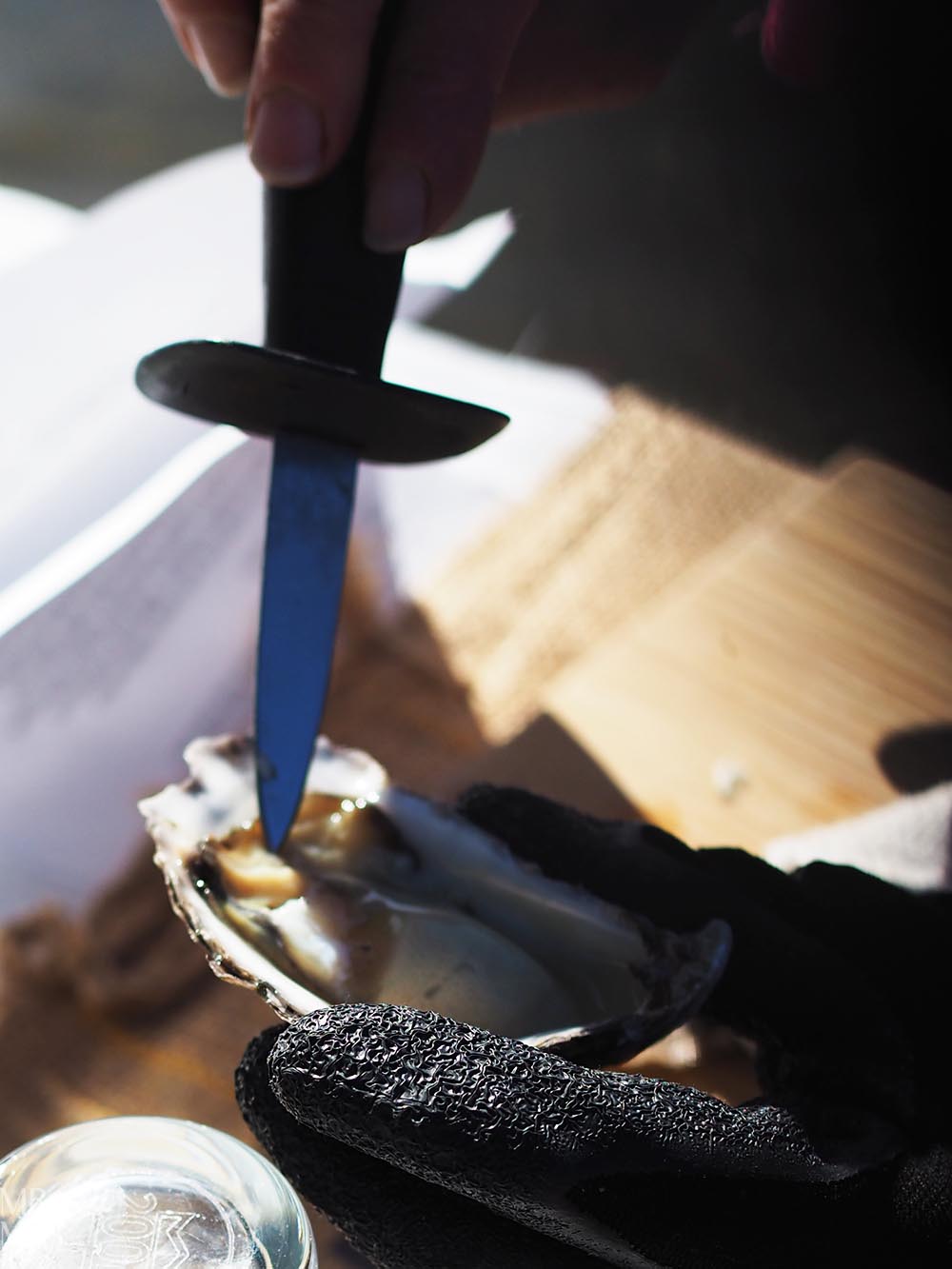 Our teacher, the lovely Mel, takes us step by step through the best way to open an oyster. First removing the excess shell at the hinge, then prising and popping the oyster open, cutting through the muscle joined to the shell, then turning the oyster meat and slurping it down, she makes it look easy.

It’s tricky at first, but under Mel’s watchful tutorage, we quickly improve.

This is a simplified five-step instruction on how to shuck oysters:

Mel also tells us a few tricks for spotting a dodgy oyster or one that’s been eaten by a predator already, then about the process of farming them, what affects their flavour and then about eating them.

First we try the oysters just on their own.

We’ve never tasted oysters straight from the sea before and the experience is completely different to any oyster we’ve had in the past. Once you’ve had fresh oysters in their own brine, you’ll never forget it.

The liquid inside an oyster’s shell really magnifies the taste and texture, and also tells you about where the oyster is from. Similar to the terroir that wine-makers talk about, oyster connoisseurs have ‘merroir’—the conditions and location that oysters grow in. 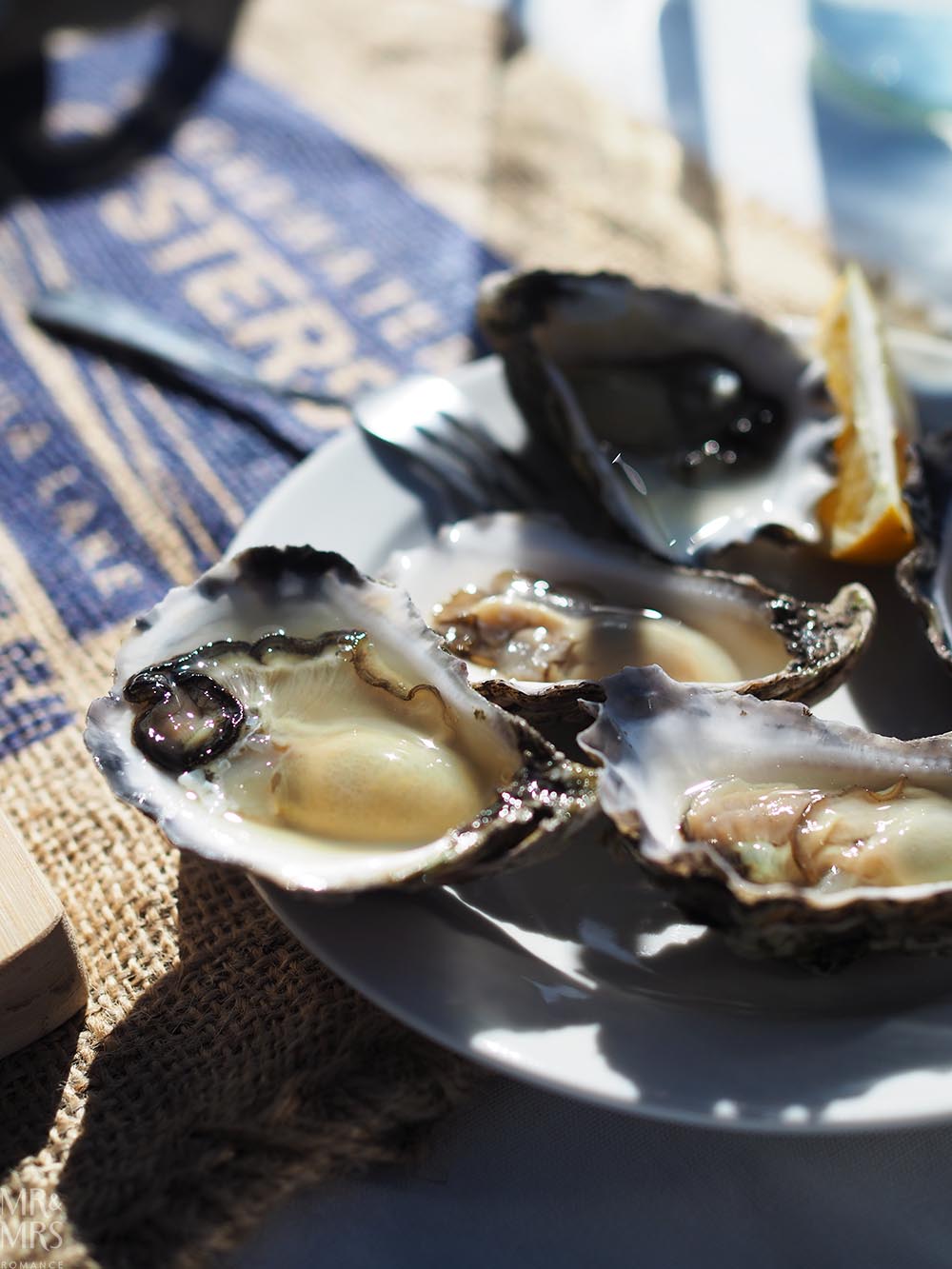 Pambula oysters tend to be less salty than their Merimbula relatives, which also have higher minerality due to more saline water and a sandy lakebed. Also, Broadwater’s oyster lines are in an area with more seagrass, so there’s more sweetness to the oysters.

If you’ve had oysters at a restaurant, chances are they won’t have had the original brine inside. Most venues rinse their oysters before serving, and though you still get a taste of the shellfish, its over all flavour is really dialled back. 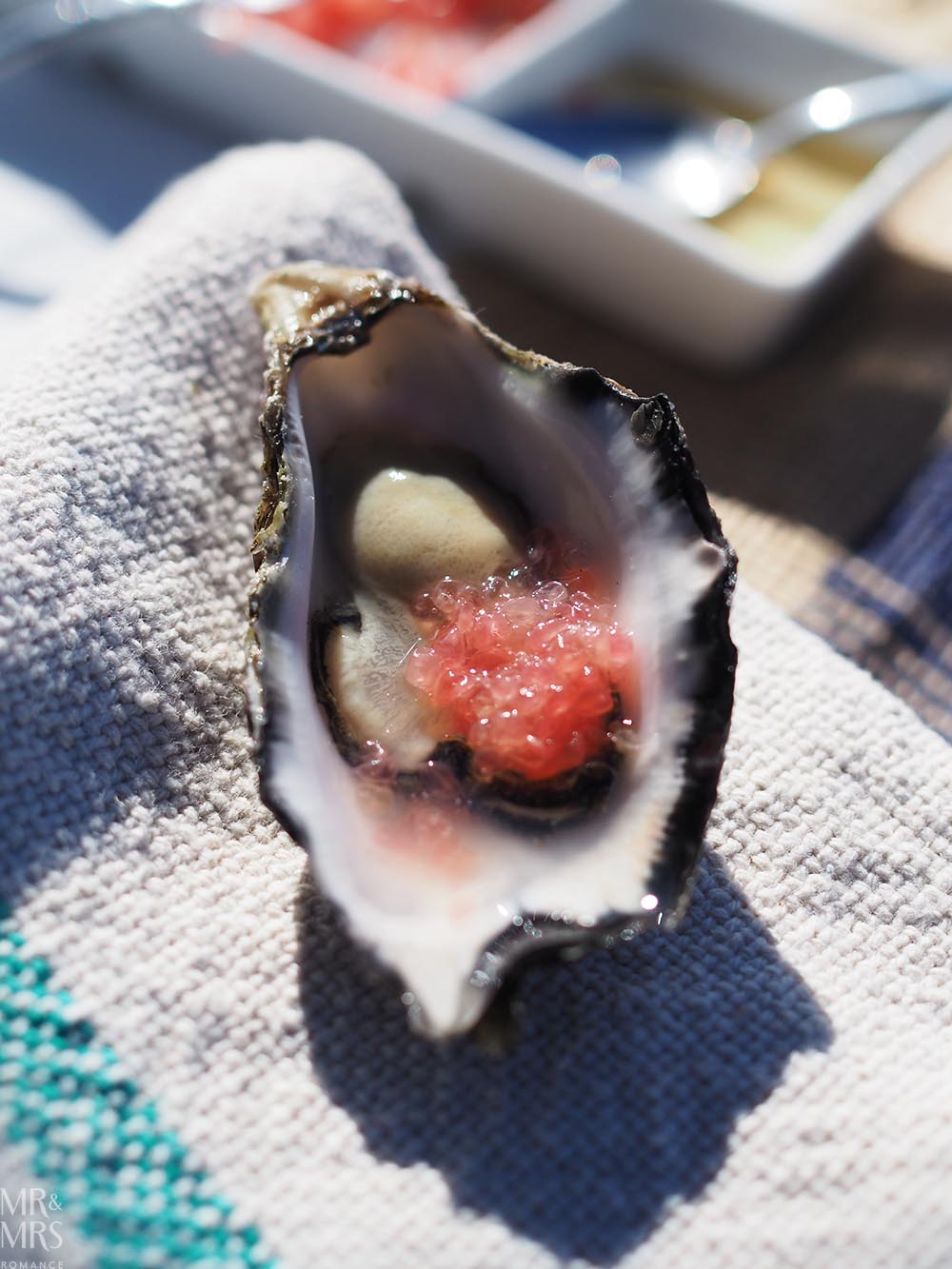 Next we try oysters with a little lemon and then a few toppings including pink finger lime caviar, which is excellent. By the way if you want to learn more about Australian finger limes and where they come from, check out our story here.

But then Mel shows us a trick that changes everything.

She tells us to pour a little of our sparkling wine over our next oyster. The sudden fizz and slight acidity of the Champagne does something wonderful to the oyster and its intense brine.

Definitely something to try next time you have oysters and Champagne to hand. 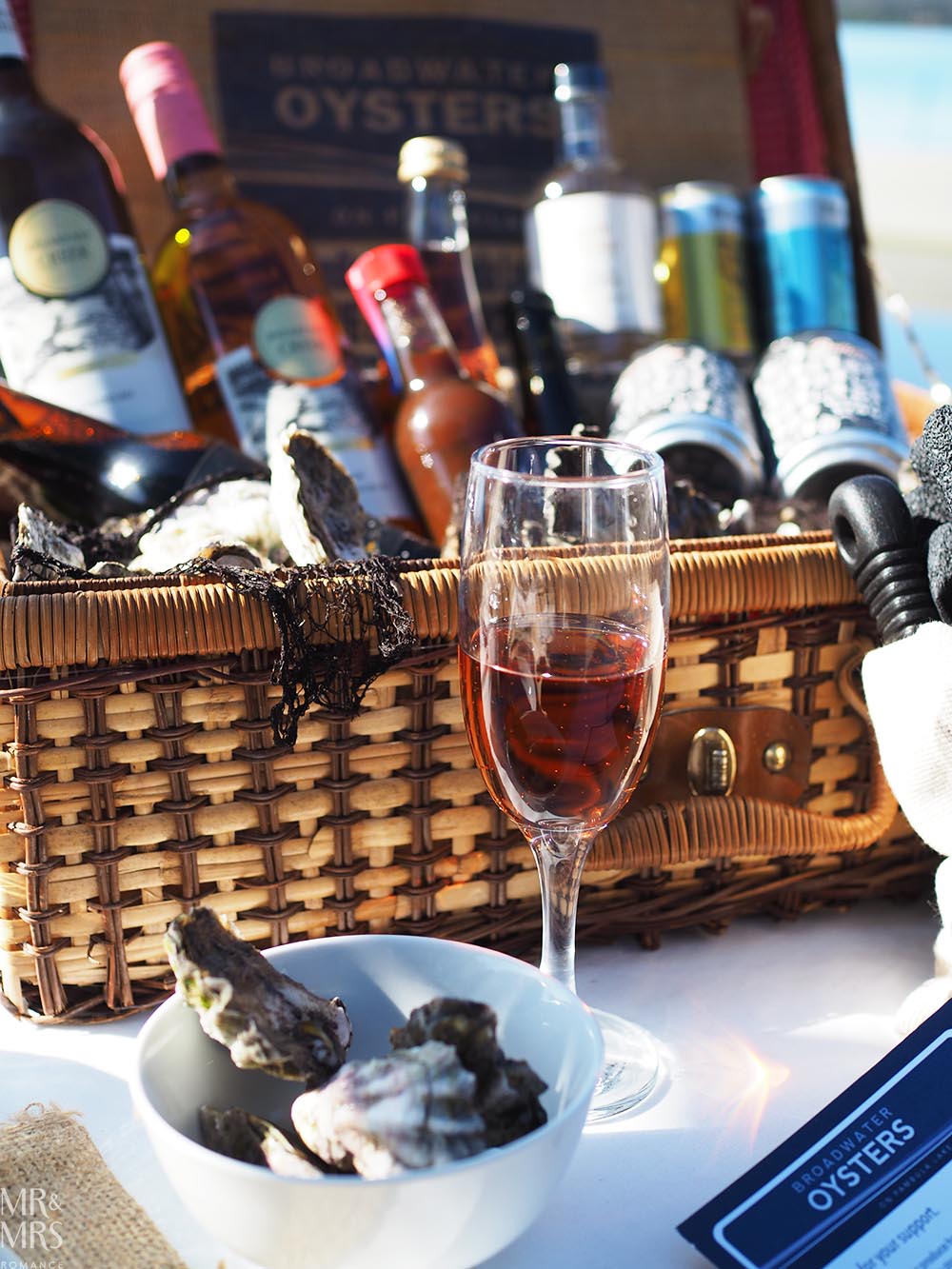 Other experiences at Broadwater Oysters

As well as shucking classes, Broadwater offers a few other experiences. They have cheese and tasting platters stacked with local produce or trays of freshly shucked oysters to eat on the outdoor tables here.

You can also have full-blown picnic hampers and kayak tours around the lake, group events, tours of the farm and the opportunity to meet Sue McIntyre and Greg Carton, the friendly owners of Broadwater. 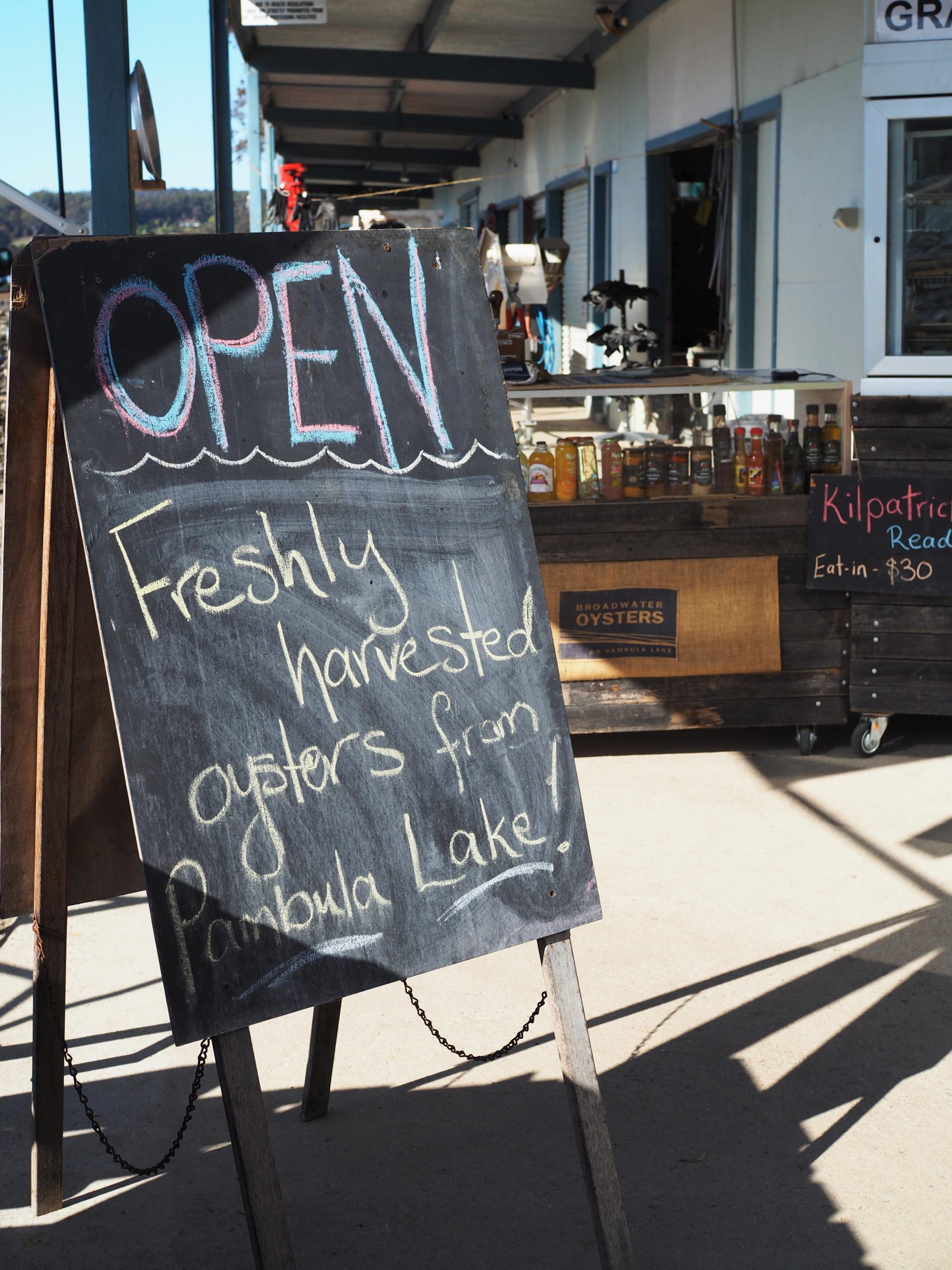 Broadwater Oysters are the main supplier of Sydney Rock Oysters to all surrounding restaurants and shops, so whenever you order oysters in the region, you’re almost always eating theirs. They also sell direct to the public here at their lakeside farm ‘shellar door’, and you can order online too.

In fact, as soon as we got home, we ordered three dozen unshucked oysters (12 of each size—cocktail, select and premium) and they arrived in a couple of days. 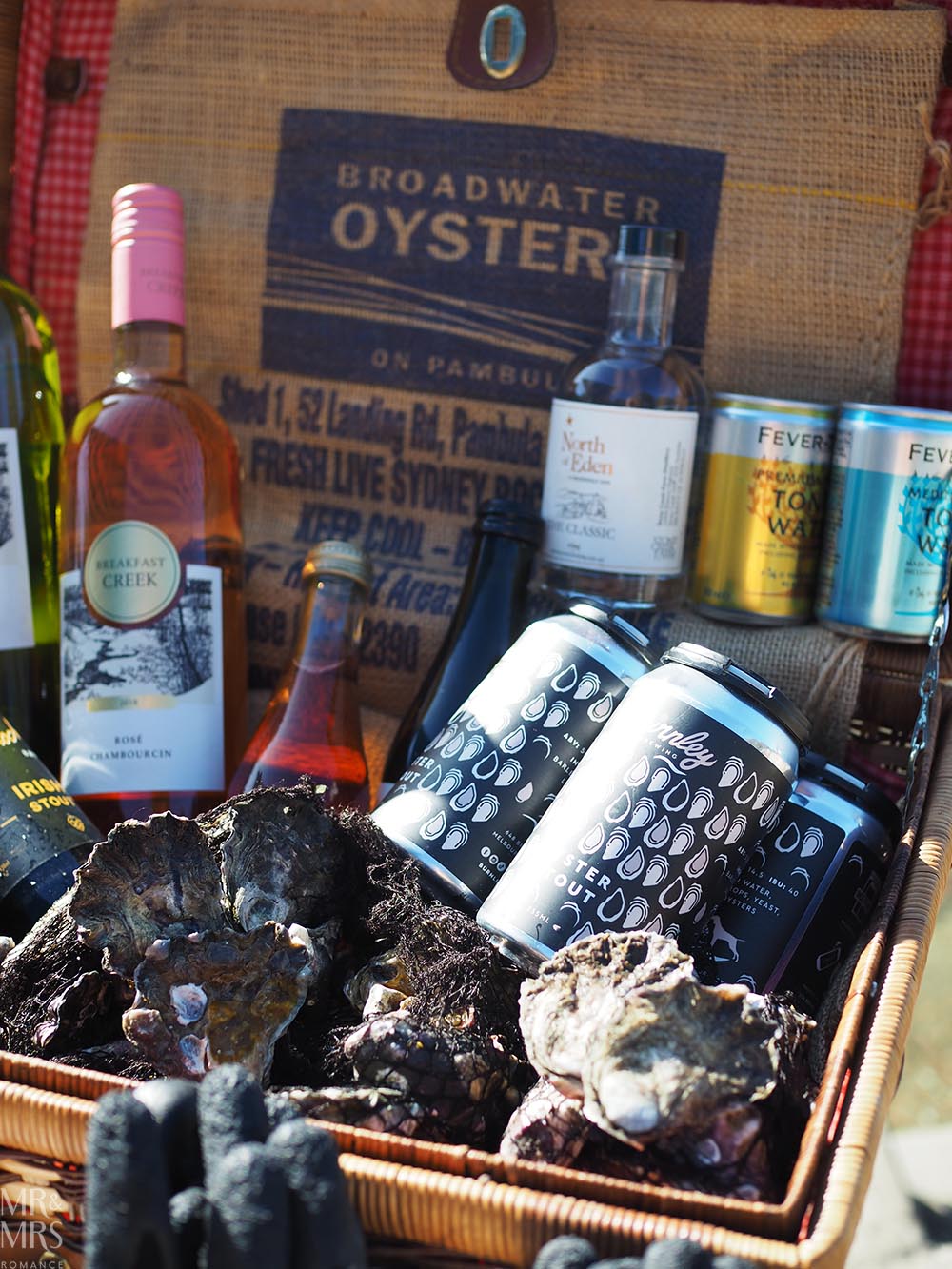 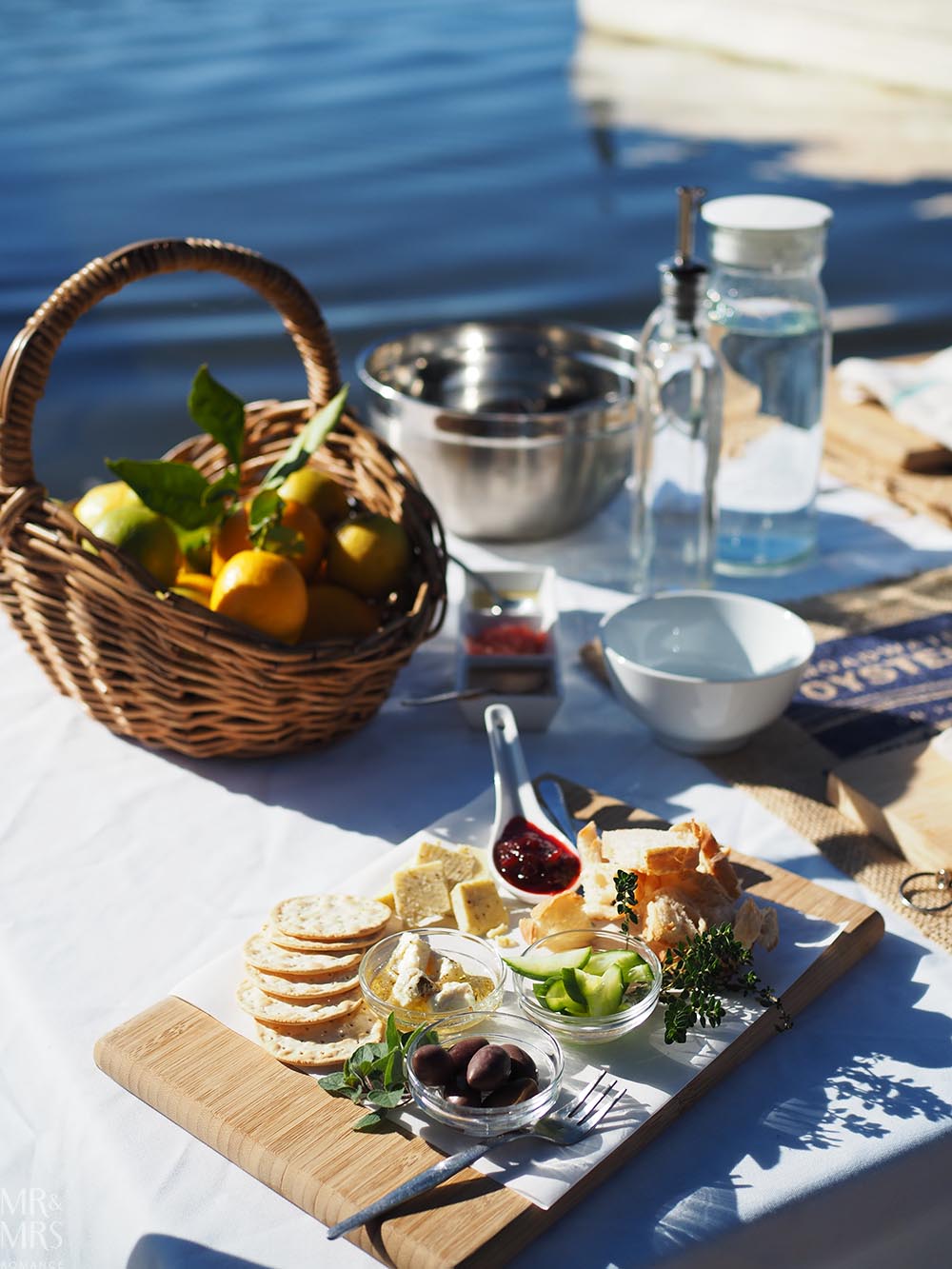 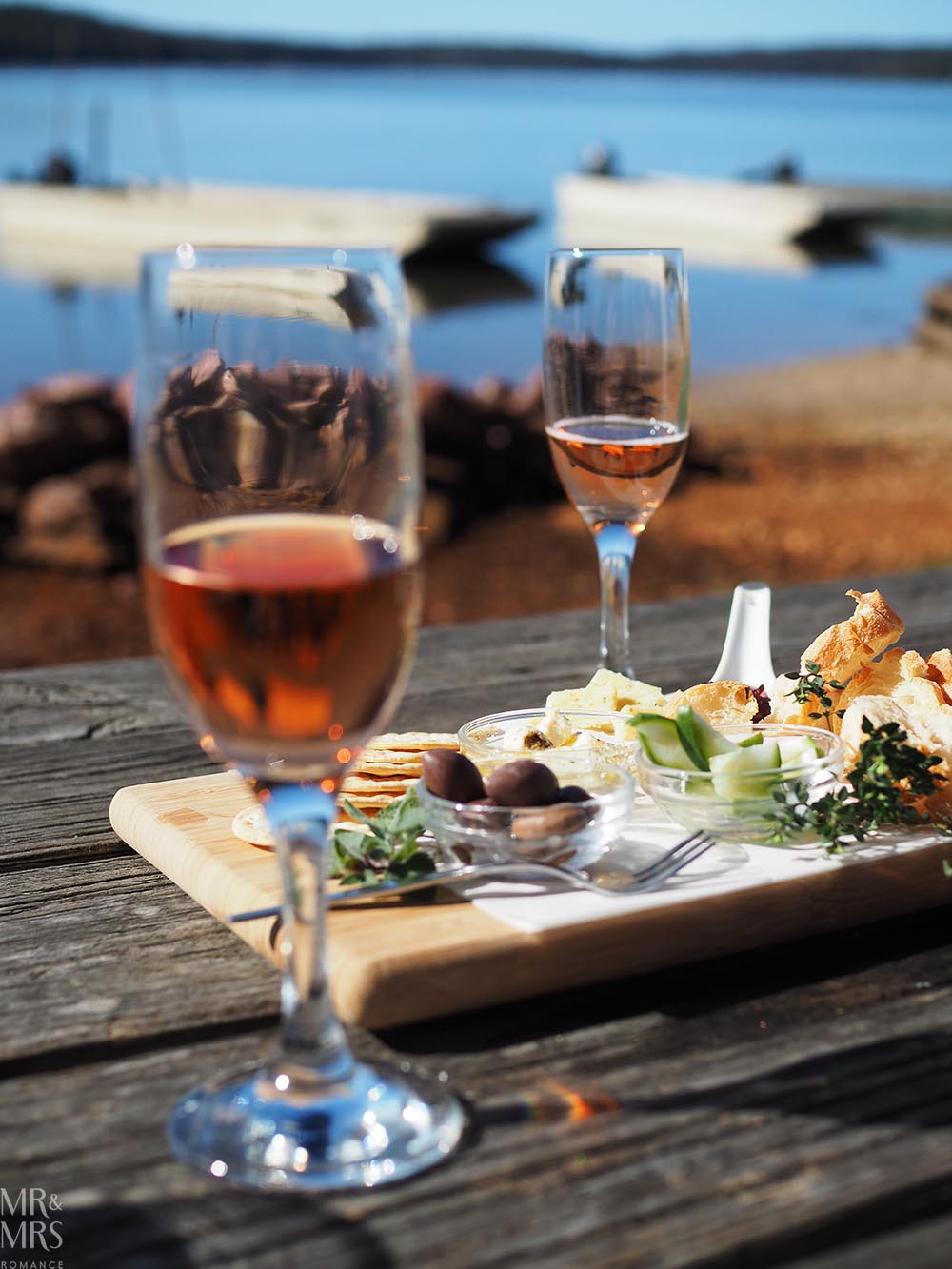 Sydney Rock Oysters can last up to 10 days out of water. All you have to do is keep them cool, dark and damp. A bucket in the laundry with a wet towel over the top does the trick. Don’t put them in the fridge or in water: that will kill them.

If any remain open, smell bad or look a bit shrivelled, throw them out. Broadwater gives you a couple extra in each order just in case.

What is the Sapphire Coast Oyster Trail?

Famous for its oysters, the Sapphire Coast is the place to come if you love these delicacies and want to learn more about them.

The Sapphire Coast Oyster Trail runs from Wapengo just north of Bega down to Wonboyn, 20km from the Victoria border.

All the way along this stunning 100km stretch of coastline, you can experience Sydney Rock Oysters in all their forms and never fresher.

Check out Sapphire Coast’s top ideas for experiencing this amazing region for yourself. 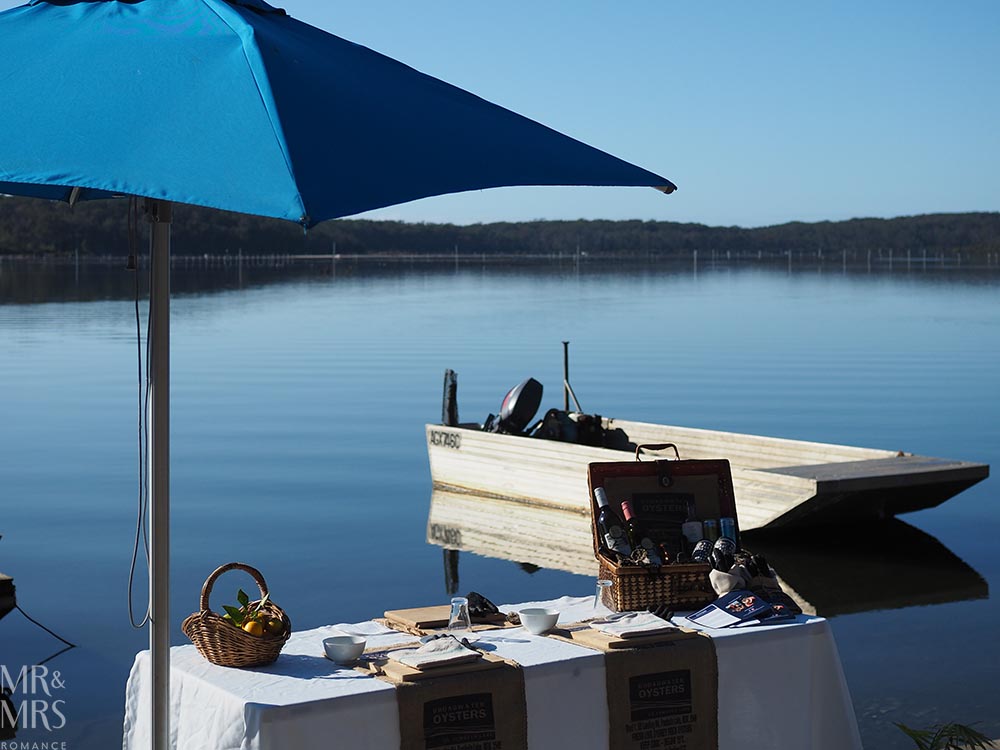 Getting to the Sapphire Coast

It’s a six-hour drive from Sydney and a seven-hour drive from Melbourne to Merimbula (thankfully there are lots of options for an overnighter along the way) and just three hours in the car from Canberra.

You can also fly into Merimbula Airport—it’s just over an hour from Sydney and Melbourne, but where’s the fun in that? 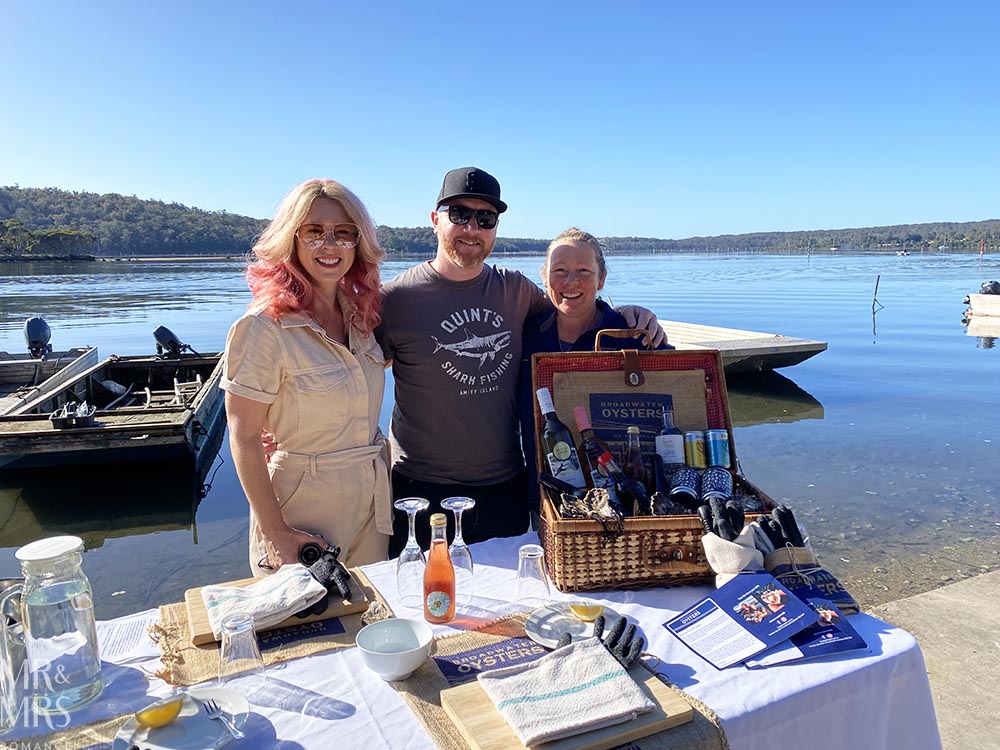 Christina and Jim with owner of Broadwater Oysters, Sue McIntyre

We visited Broadwater Oysters as media guests in partnership with Sapphire Coast Tourism, but our opinions remain our own.