From obscurity to ubiquity, finger limes and their powerful citrus flavour are in so many of the things we eat and drink now. But what are they, where do they come from, and what’s the story with finger lime gin? 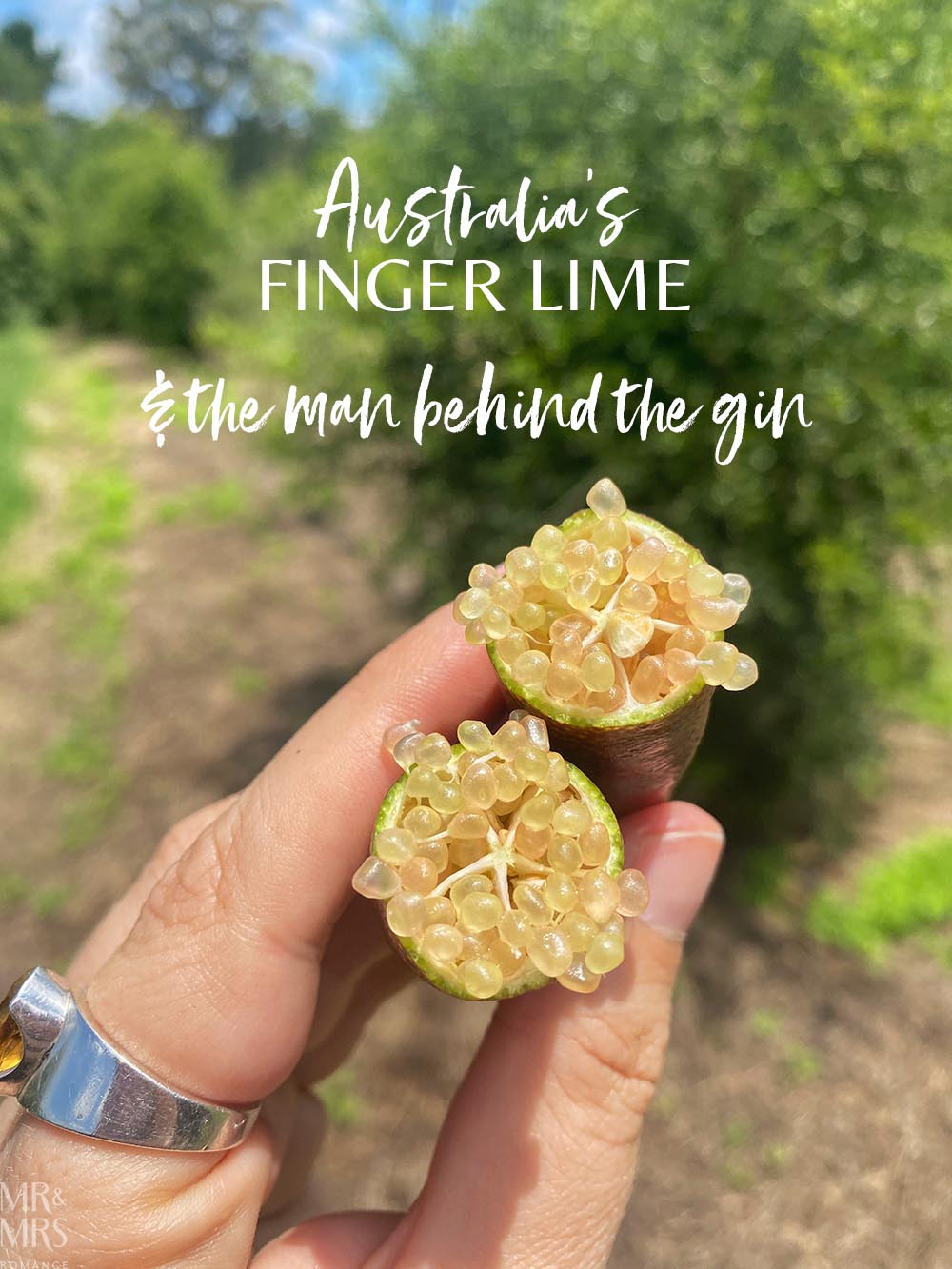 High on a plateau of the Blue Mountains a couple of hours west of Sydney Australia, Lee Etherington—farmer by trade, inventor by purpose and distiller by accident—stares out over his unusual crop.

From the rows of stumpy shrub-like trees dangle dark fruit that look a bit like fingers. Closer up, their bumpy green and deep dark red peel more resembles the skin of a lime.

Indeed, these are finger limes—one of six citrus fruits native to Australia—and one that has become incredibly popular in recent years. 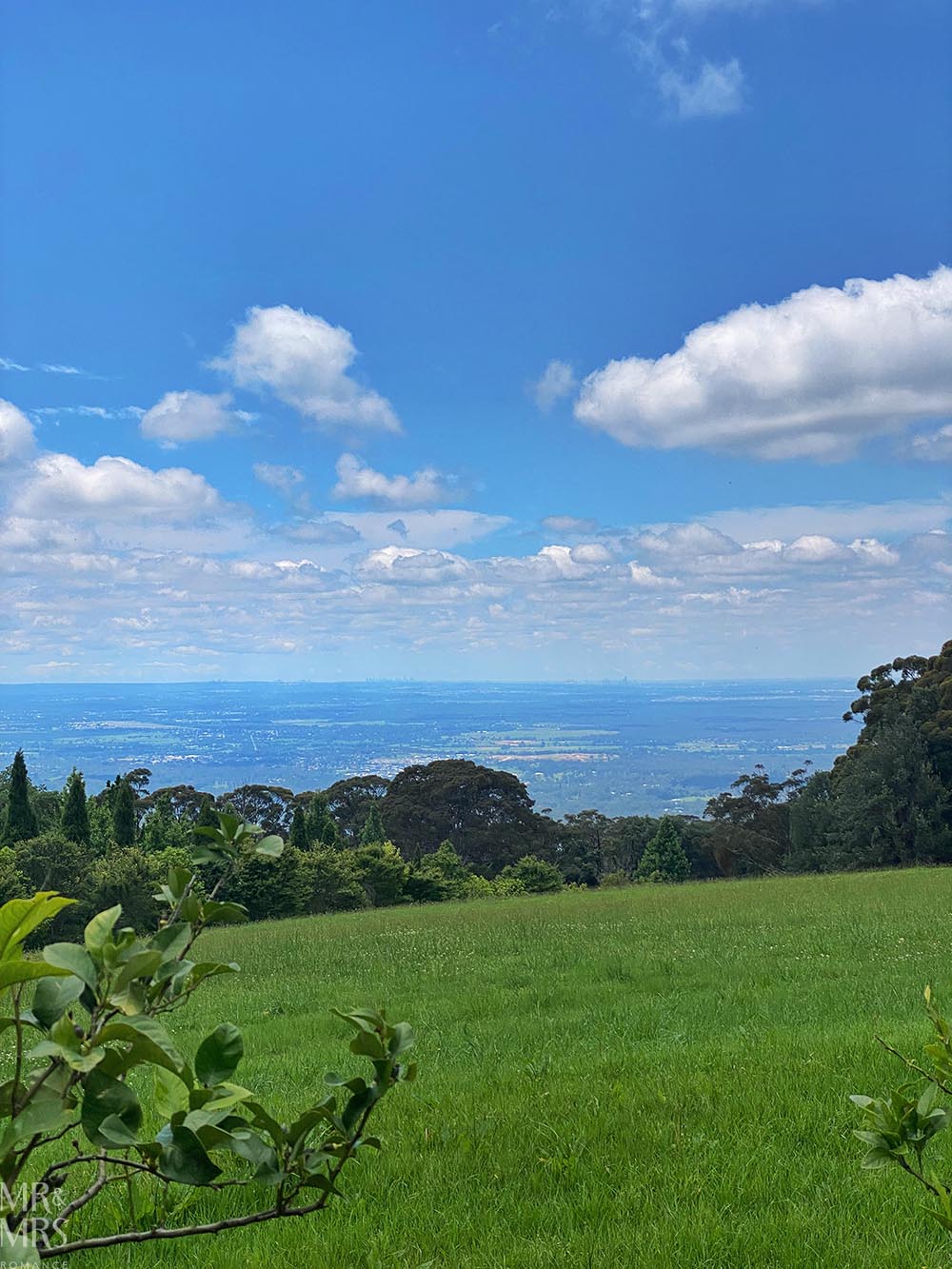 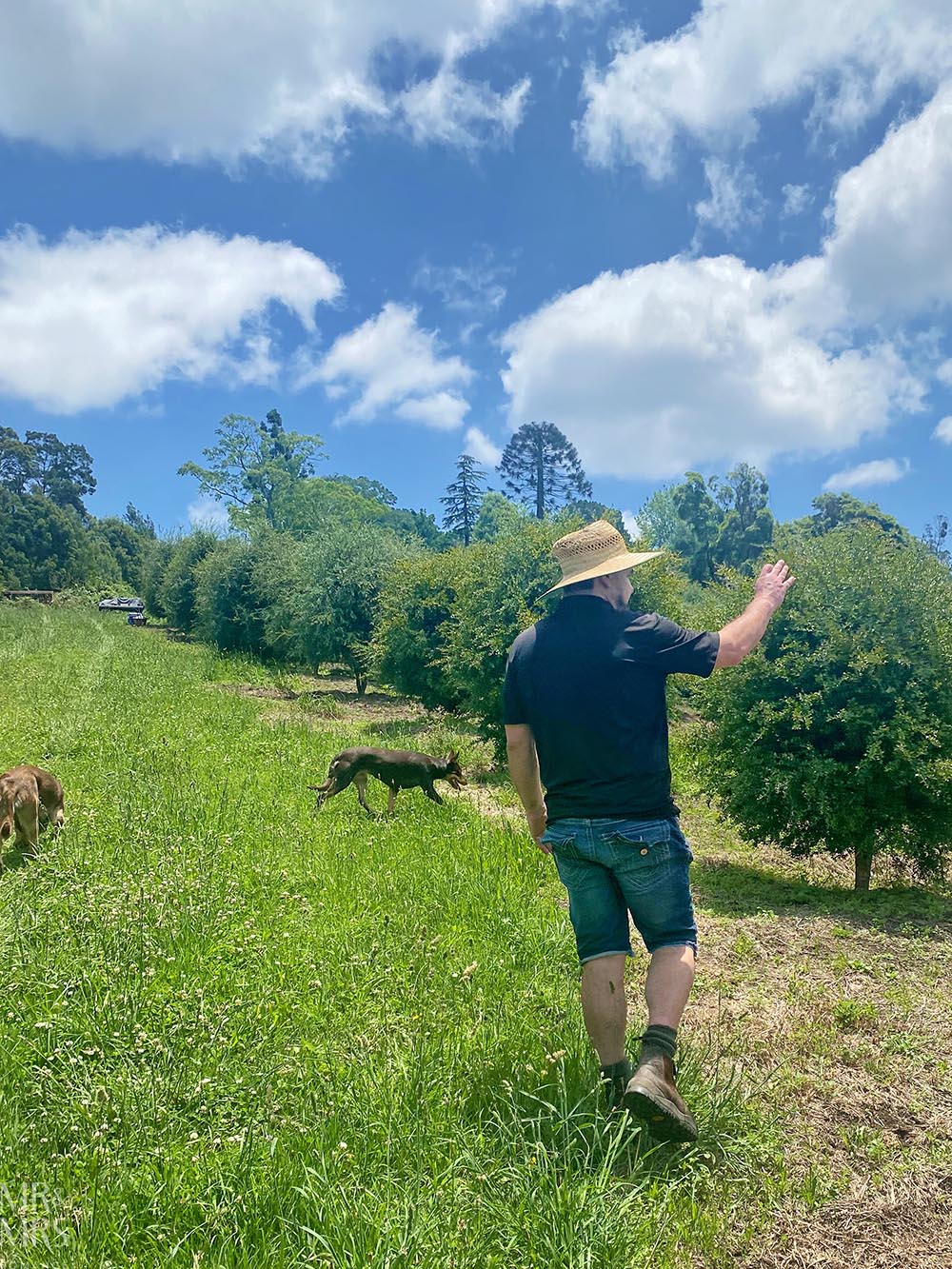 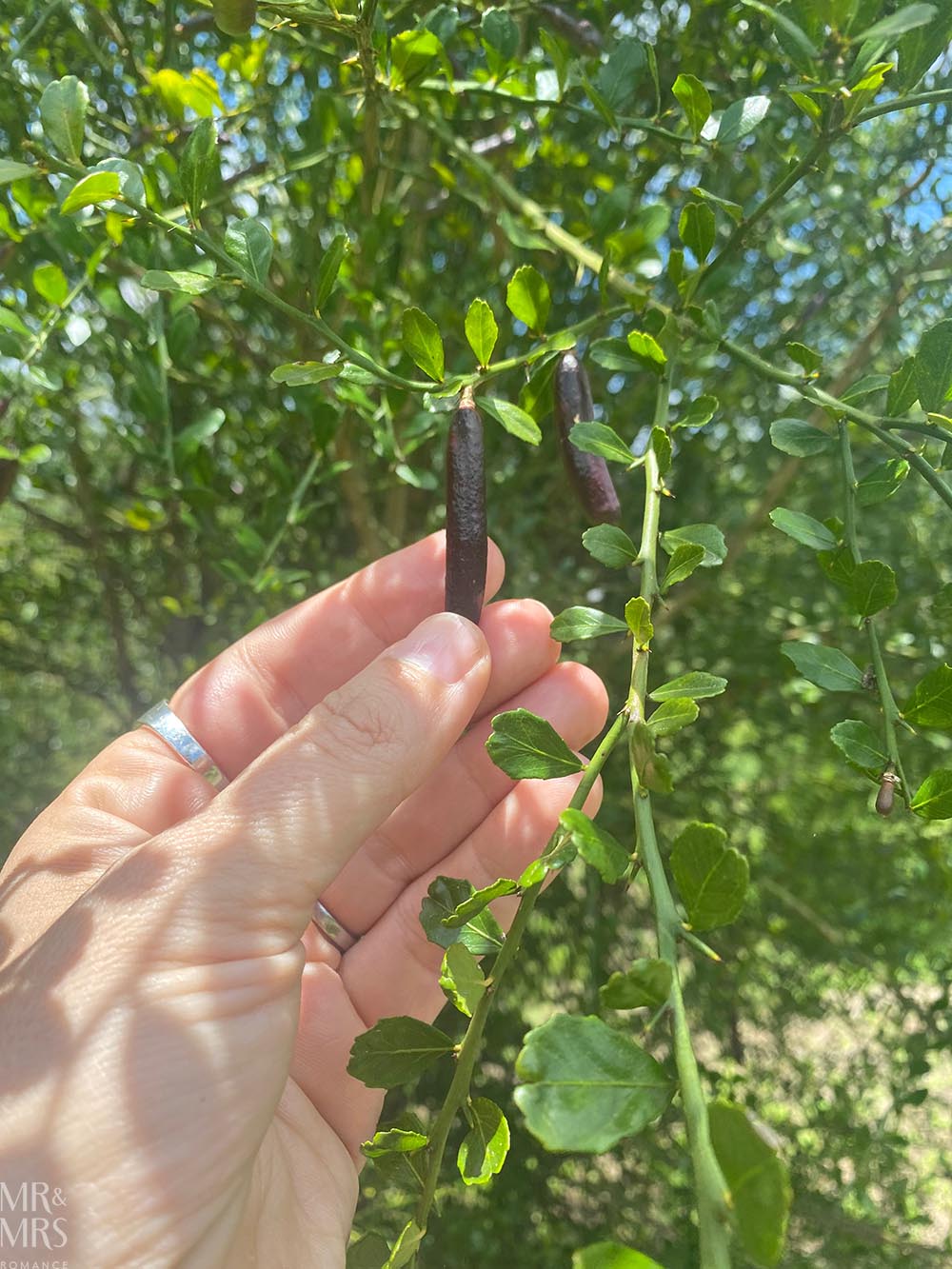 Lee reaches into the branches and plucks a finger lime, which in truth looks more like a bloated chilli or an okra than a finger, and snaps it open and squeezes gently.

Inside is not what you’d expect.

Neither seeds nor juice—nor bones for that matter—lurk within. And rather than the segments you expect in citrus fruit; finger lime flesh is packaged in tiny balls like salmon roe.

In fact, the fruit is often referred to as finger lime ‘caviar’. These bright green and red beads are bursting with tart, tasty citrus juice. And they’re a revelation. 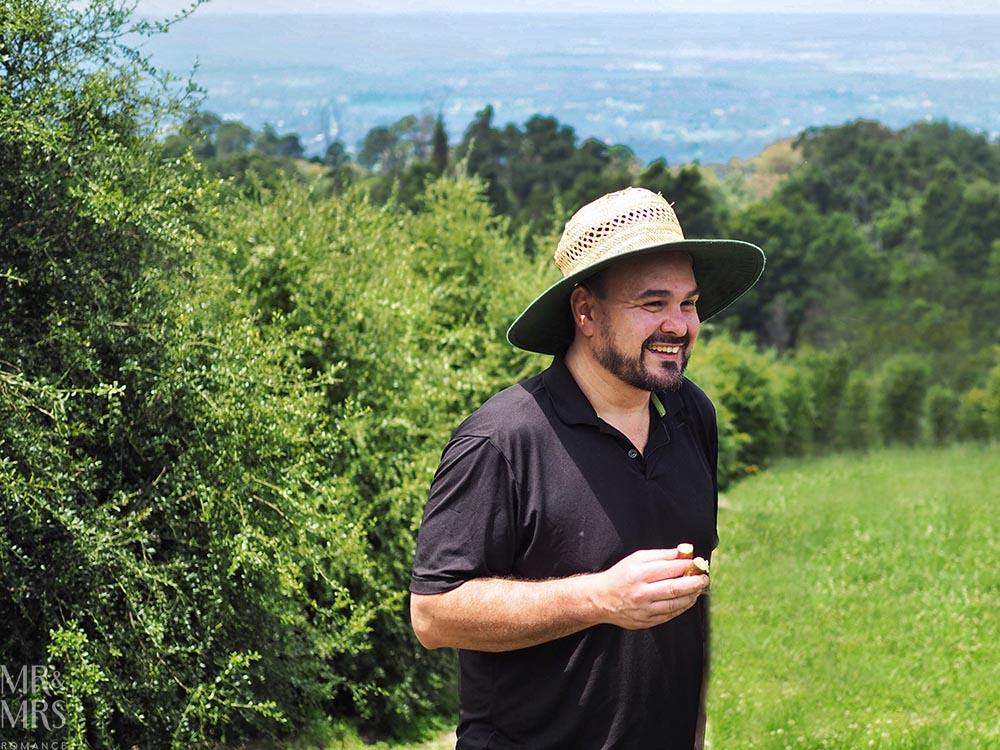 Lee’s first success was actually with hibiscus flowers. He developed the technique for putting the flowers into jars and preserving them in bright red syrup. We used his hibiscus flowers in our cocktail book when we first started Mr & Mrs Romance so many years ago.

Lee even broke into the States with this product and now sells his creations in over 50 countries around the world.

But with finger limes, Lee decided he wanted to craft a gin that made the most of this unusual caviar-shaped fruit. Other distilleries have finger lime caviar in their bottles, but because the fruit is heavier than the spirit, the beads just settle at the bottom of the bottle. 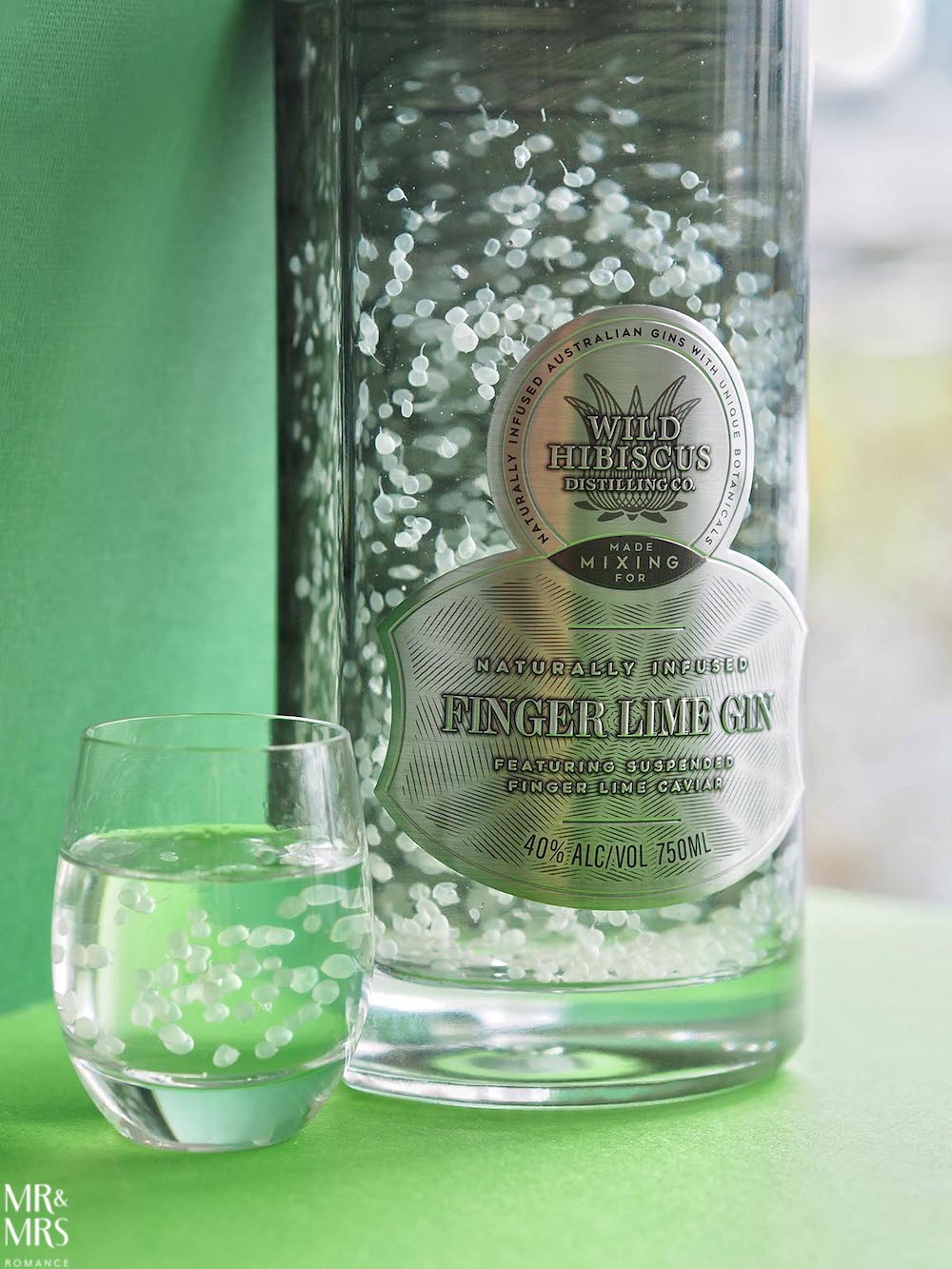 After ten years—yes, ten years—of R&D, Lee has come up with a technique using a protein from a lotus that creates a kind of web inside the gin. It’s flavourless, colourless, odourless and is completely natural, but it holds up the little balls of finger lime, appearing to suspend them throughout the liquid.

It means you can really see the finger lime caviar perfectly, but it also means every pour guarantees some finger lime pieces—not just whoever gets to the end of the bottle.

What’s more, Lee decided the gin needed something extra—another flavour profile. So he soaks the finger lime caviar in a completely separate gin for the fruit to absorb those flavours before they go into the bottle. Effectively, you’re getting two gins in one.

And because Lee doesn’t like to stop for very long, he’s produced another fingerlime gin using the deep red finger limes too. 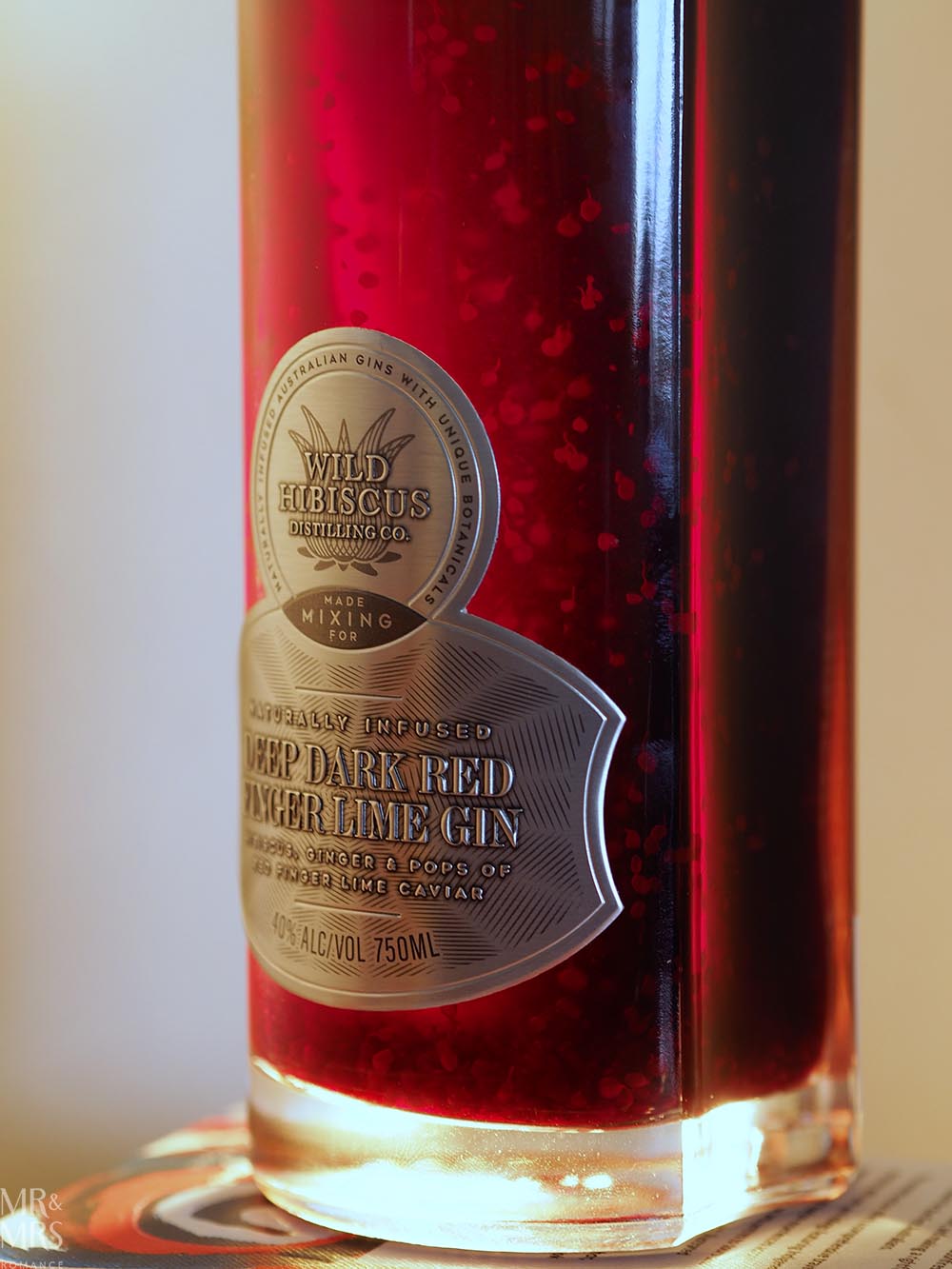 The problem with finger limes

It would be good news to learn that farming finger limes was an easy occupation, wouldn’t it.

Sadly, that’s not the case.

As Lee explains as we walk round the orchard, the trees are covered in long, sharp thorns, which makes hand-picking unpleasant. But because the fruit is quite delicate, machine harvesting isn’t an option. 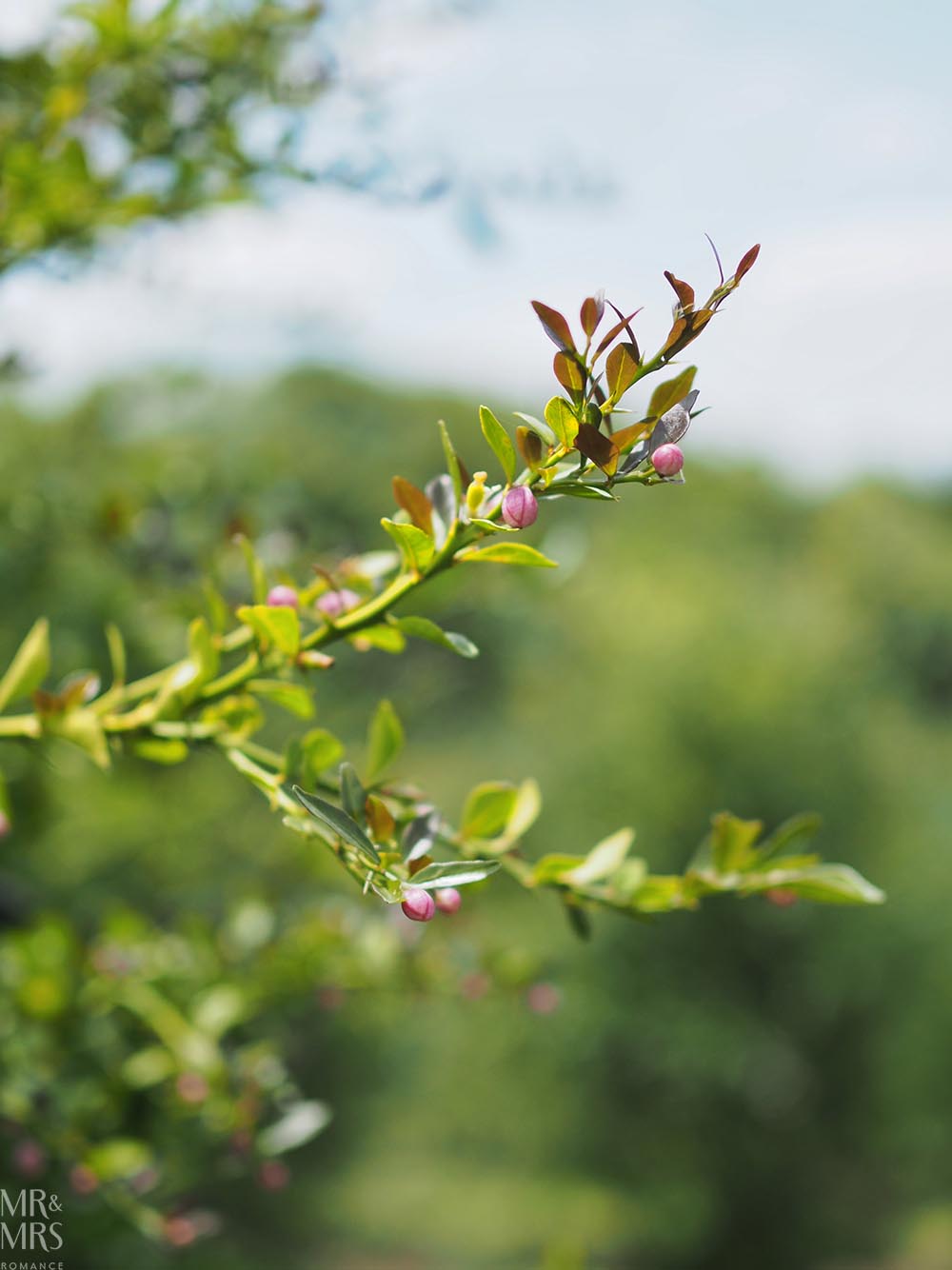 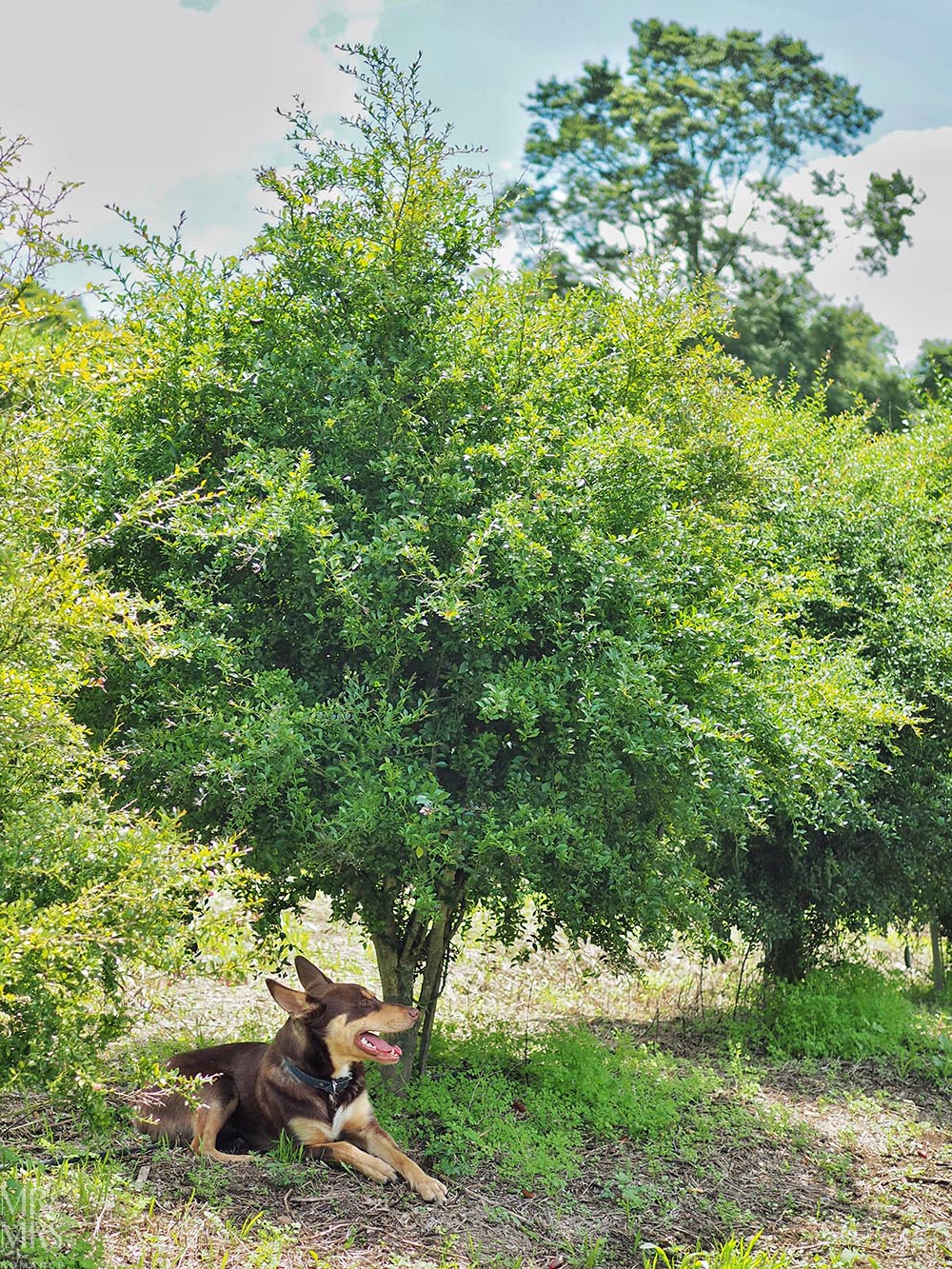 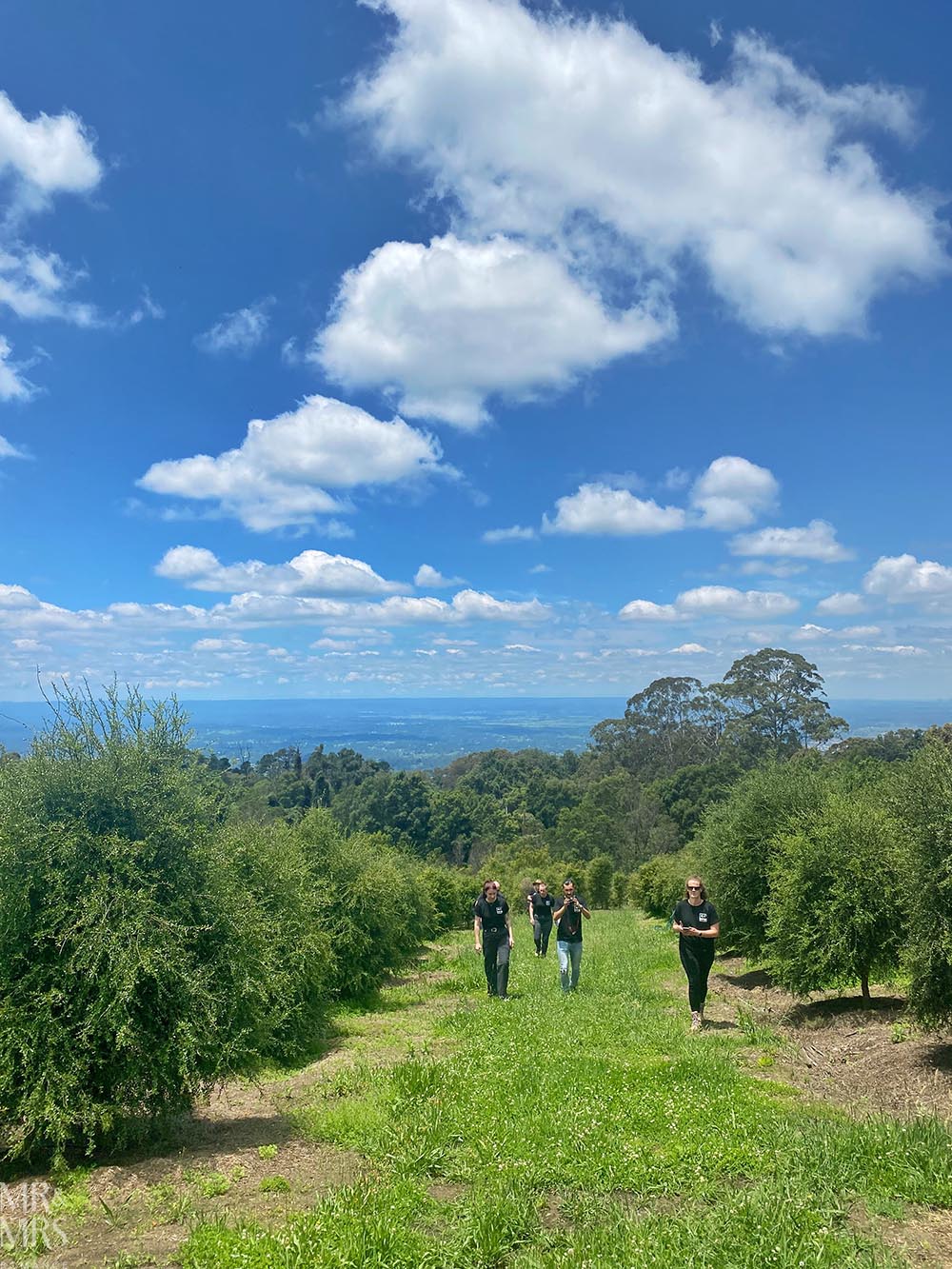 We’re here at Lee’s farm with the excellent Nip of Courage crew!

Finger lime skin is full of bitter oils that, if mixed with the fruit, ruins the flavour. The oils are also very sticky and don’t come off your skin easily either.

What’s more, finger limes—especially the red ones—like to ripen all at once. Lee paints the picture of everyone dashing into the orchard in an effort to pick as many ripe fruit as they can, all on the same day. After that, the fruit is often past it.

And just to add an extra layer of difficulty, each finger lime is also full of tiny seeds, which need to be removed before they can be processed.

But the deadly icing on this particular cake is the land here is a favourite spot for one of the world’s most dangerous spiders. 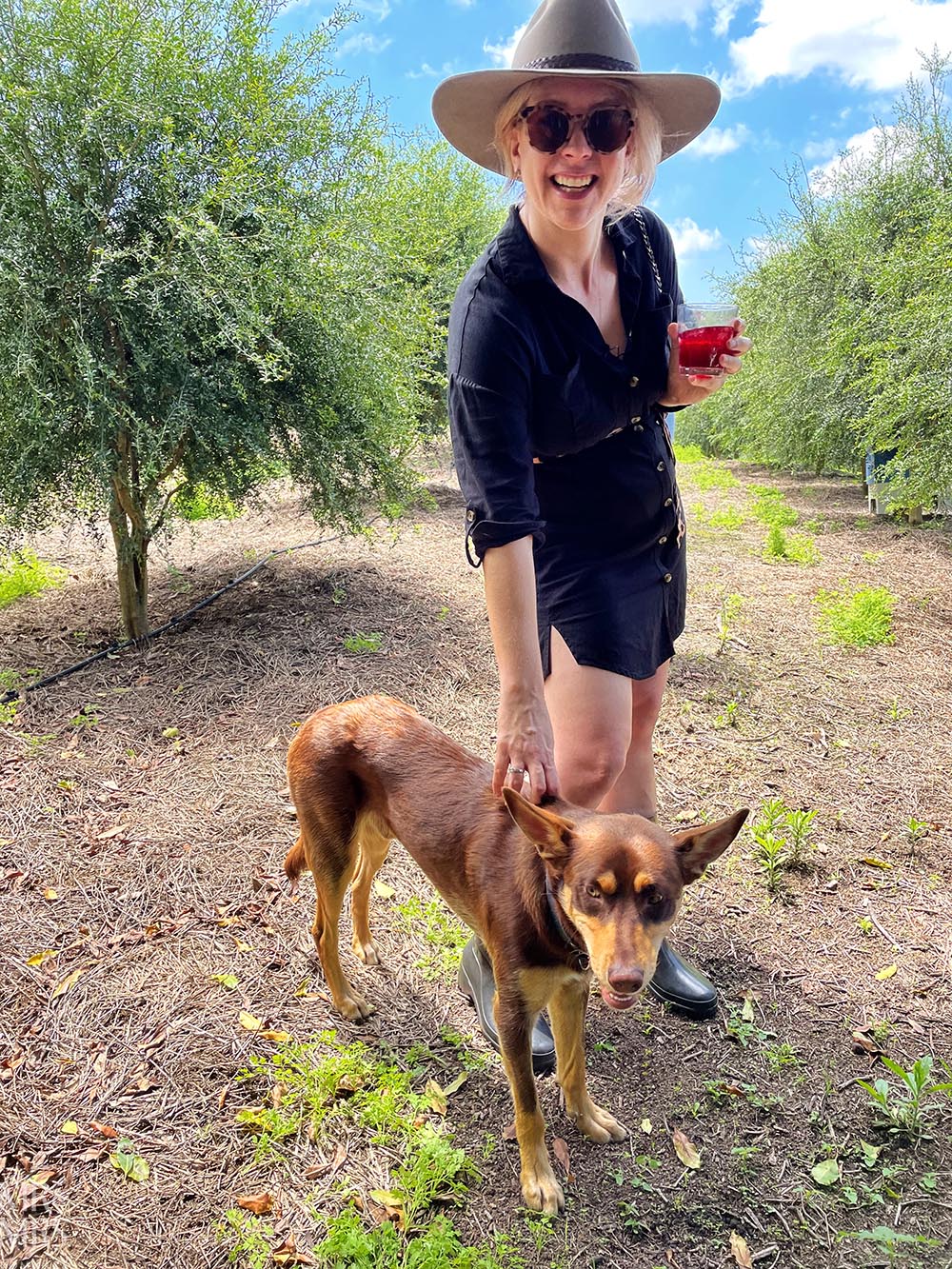 The highly venomous and aggressive Sydney funnel-web spider, which has a bite so powerful it can easily pierce your thumbnail with its fangs, likes to live in burrows in soft soil.

And there are telltale holes literally everywhere on the orchard floor.

But when you take that first sip of the most impressive gin and tonic you’ve ever had, bubbling with little spheres of finger lime and bursting with that effervescent lime flavour, you realise all the research and hard work, all the thorny pain and risk of death has been worth it.

You can pick up your bottle of Wild Hibiscus Co Finger Lime Gin here. 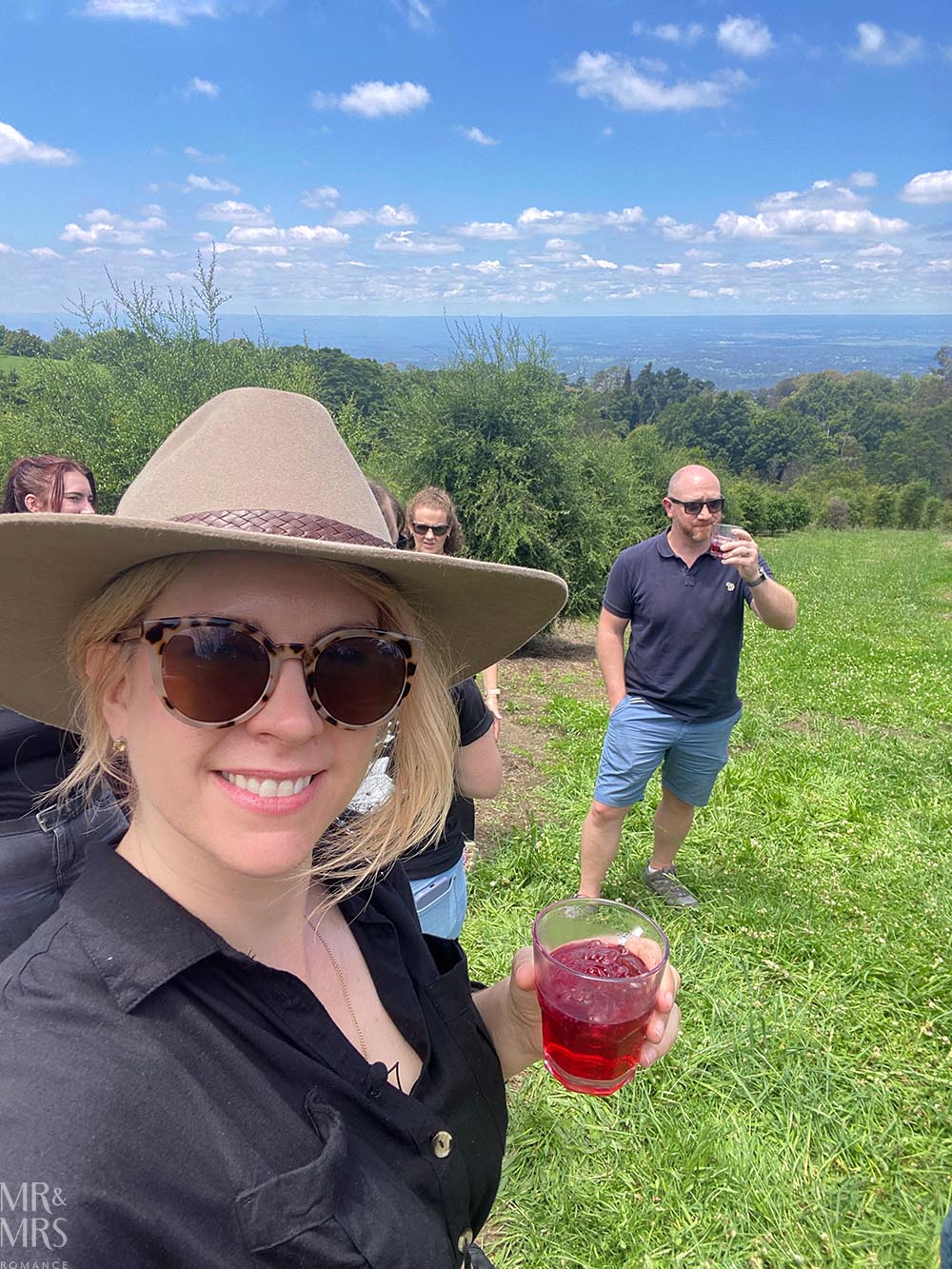 You should also check out our full review of this gin here on our regular column with hero to Australian craft spirits Nip of Courage.

Do you need a tour guide in Pompeii?

Until its death in 79AD, Pompeii was a rich thriving city. Walking amongst its broad avenues and exploring its opulent villas, shops and vast…