Thailand wears the heart of its culture high on its sleeve. But the ancient city of Ayutthaya – perhaps the most culturally significant part of the country and once its capital – is often overlooked, even though it’s so close to Bangkok. 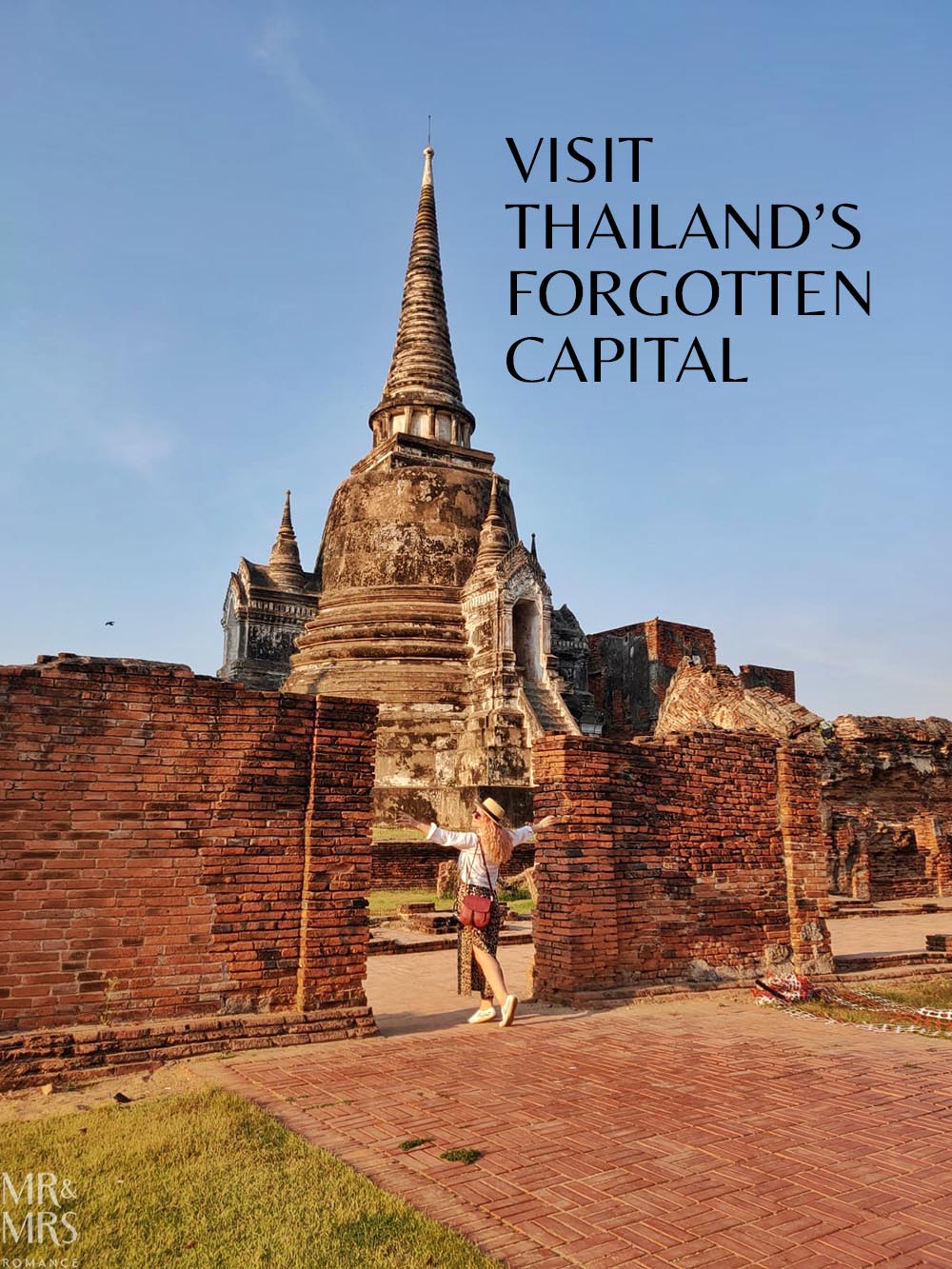 Thailand is in a symbiotic relationship with its own identity.

Together the two parts thrive, creating a place in our world with a vitality that nourishes the soul. But one without the other would lack colour and vibrance; a monochrome solo of a love song duet.

And although the voice of this nation sings clearly, it’s to a variety of tunes.

Compare the bustle, grit and gold of Bangkok streets to the humble houses of rural villages far off. Or the lonesome slopes of mountain borders to the thronged beaches of the paradisiacal south.

Each has its own melody, each its own beat.

But one place where the lyrics are most beautiful but often unheard is the moated city of ruins, the once capital of the Kingdom of Siam: Ayutthaya.

Here’s our video guide to Ayutthaya:

Ayutthaya – the capital of the Kingdom of Siam

Caught in the confluence of three colliding rivers, Ayuthaya is an island city with its own natural moat, surrounded and thus protected by deep, flowing waters.

These rivers make their way far northwest almost to the borders of Burma, northeast to Laos, and south to the sea via Bangkok. These far-reaching waterways made the capital of Siam the trading hub of southern Asia.

In spite of the protection and wealth the rivers brought Ayutthaya, they could not save the city from Burmese armies that would eventually destroy the city utterly in 1767. 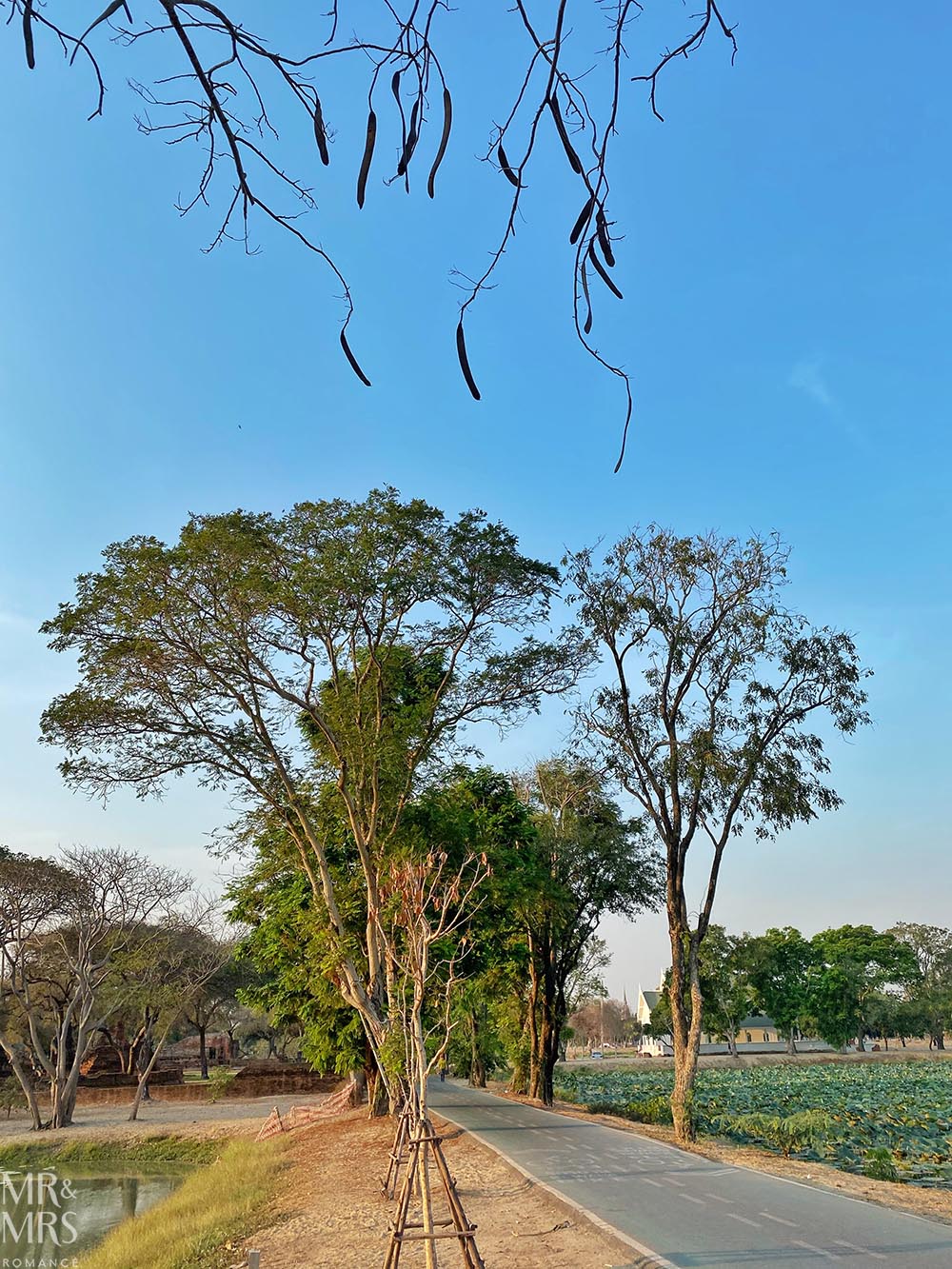 However, in the 417 years of its reign, Ayutthaya was the focus of the kings’ affection, with many beautiful temples and palaces being built here.

It’s these temples, smashed, broken and burnt by the Burmese, that make this city such a unique focal point for visitors – both Thai and international.

In spite of its size – the old city is only about 3km x 1km – Ayutthaya is a microcosm of food, history, culture, wealth and Thai ideologies.

The biggest drawcard for Ayutthaya is its temples. Inspired by the shrines of Cambodia, the pagodas here are more bell-shaped. You get a sense that these are much older than anything in Bangkok, which was little more than a swamp in Ayutthaya’s heyday.

The first ruins you should see are Wat Chaiwatthanaram on the southwestern side of the city. This site is outside the old city walls on the other side of the river moat. 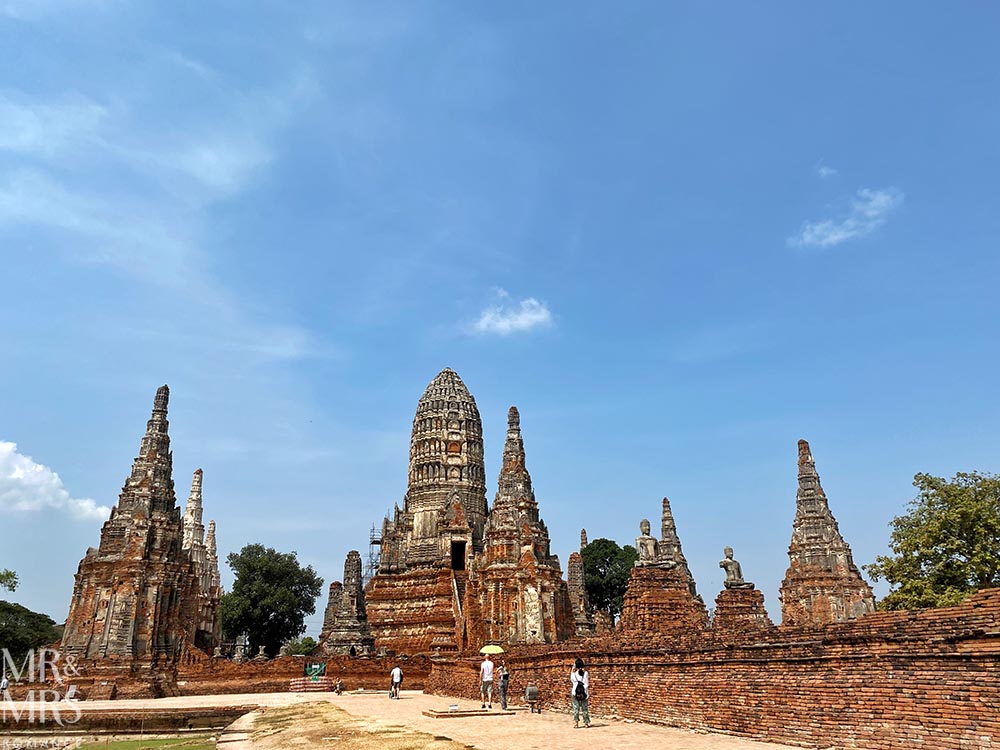 This temple and its grounds was built in 1630 and was a memorial monument and tribute to King Prasart Thong’s late mother.

Overlooking the river, there’s also a great view of the queen’s summer palace here too. 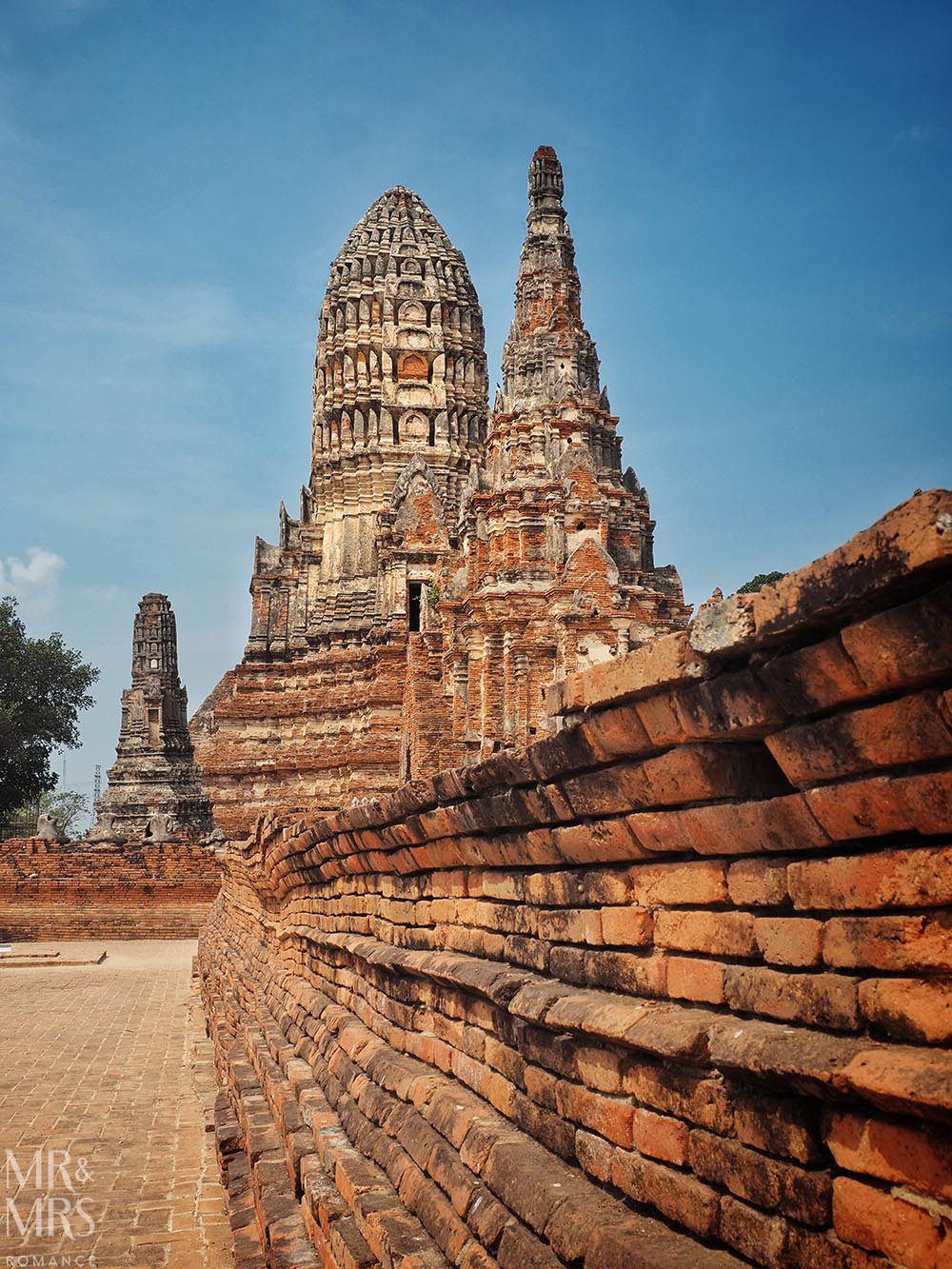 Wat Mahathat – the face in the fig tree

Perhaps the most famous part of Ayutthaya – and an image we’ve all seen but probably not known it’s from here – is Wat Mahathat and the Buddha face in the banyan tree. 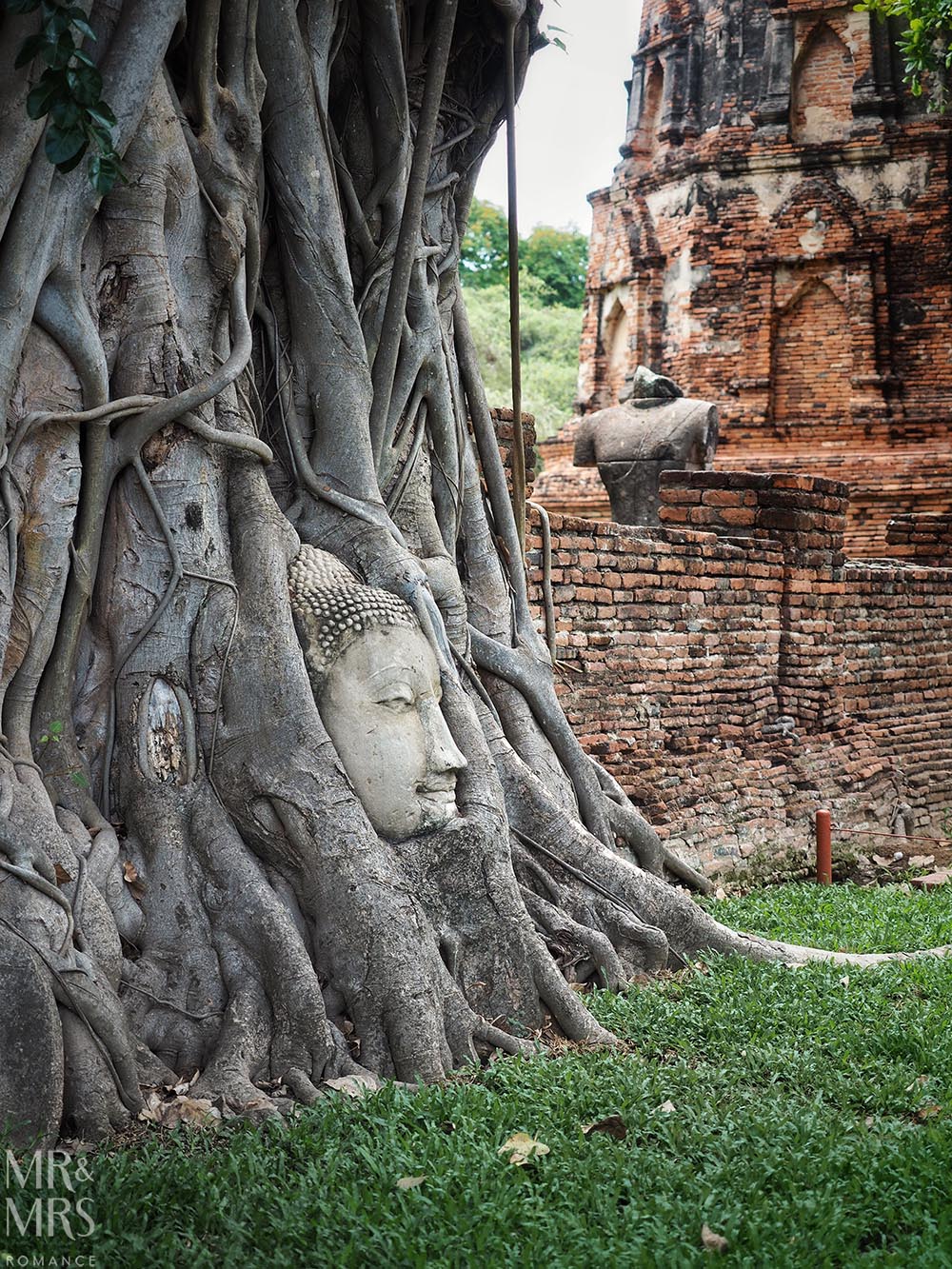 This temple and its grounds are said to have been built in 1384, though parts of it have been reconstructed over time.

It’s a fascinating, beautiful complex, full of intricate pagodas and chedi. There are literally hundreds of Buddha statues here too, though most are damaged in some way.

During the sacking of Ayutthaya, the Burmese defaced and destroyed many of the religious images. There are piles of fragments of Buddha statues around temples in Ayutthaya, which can seem a bit grisly at times. They are being put back together, but it’s like the world’s most difficult jigsaw puzzle. 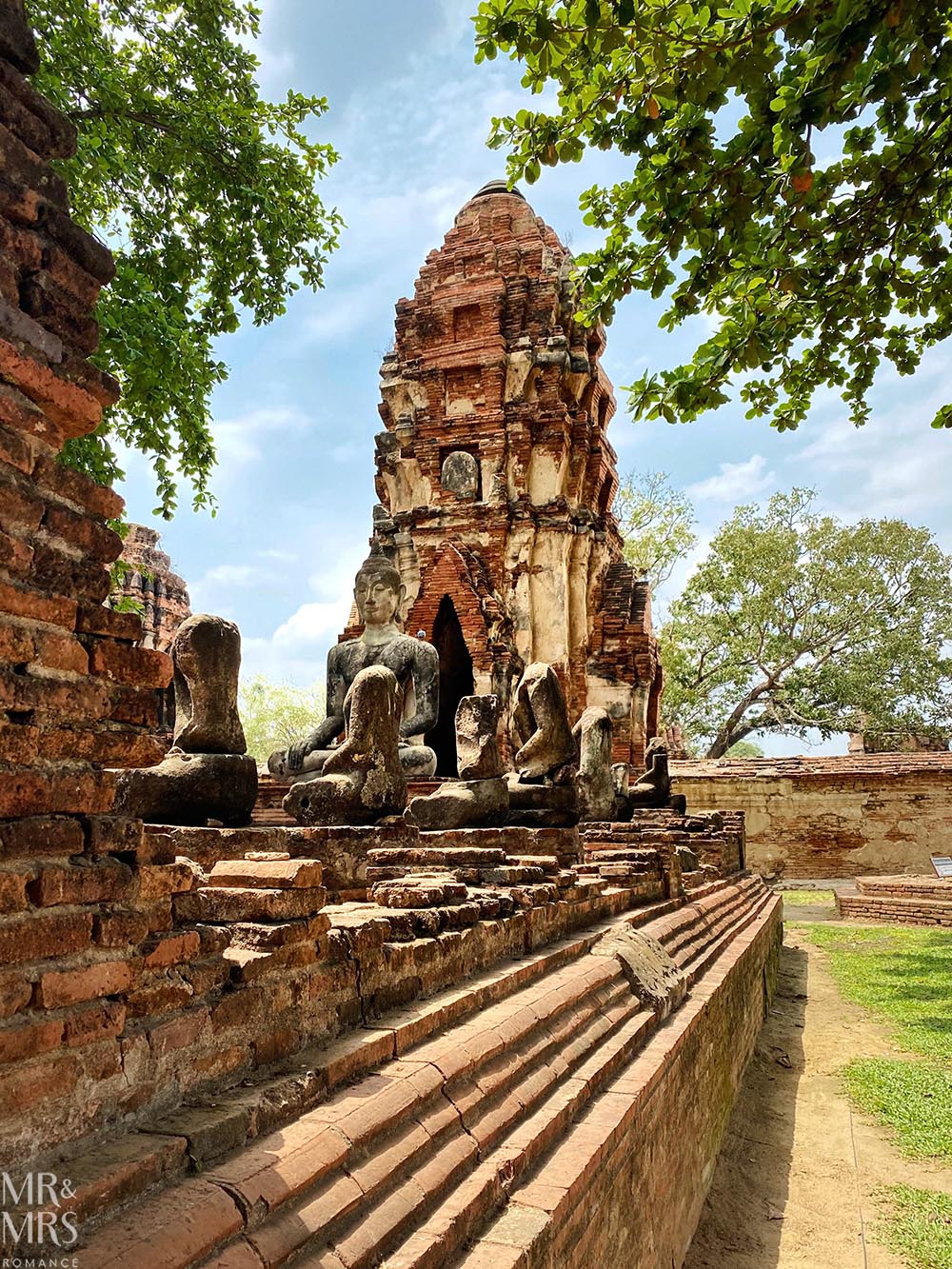 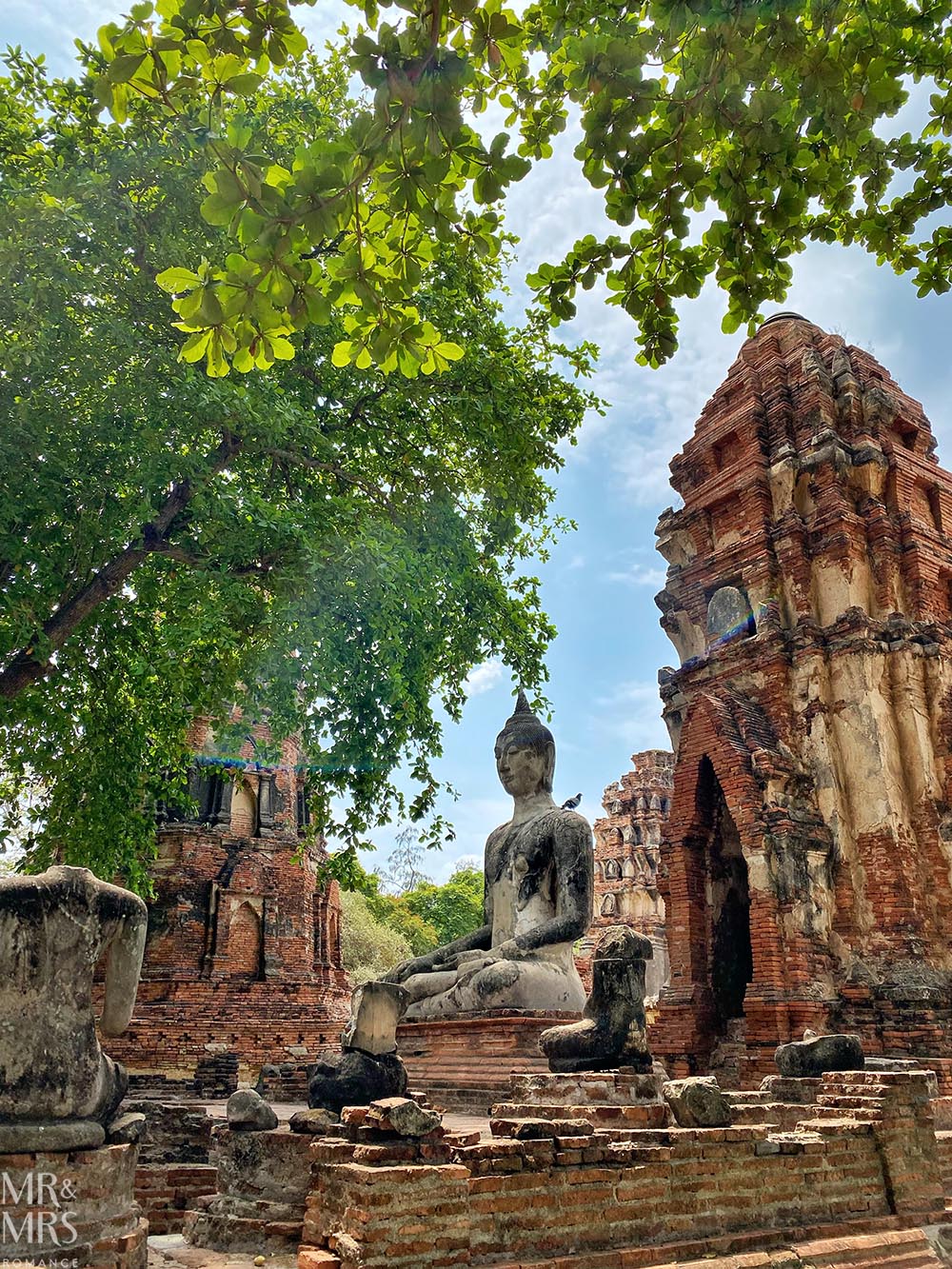 The face in the tree could have been from desecration or simply from the tree growing around a statue while the city was in ruins. Either way, it’s an eerie, moving spectacle.

There are a few reclining Buddha statues in Ayutthaya. The following two are both huge, but the bigger of the two (29m long) is in Wat Lokkayasutha in the west of the city. It isn’t in as good condition as the other though and the ruins around it aren’t as interesting.

The other reclining Buddha in Wat Yai Chai Mongkhol is east of the city outside the moated walls. It’s worth the extra effort to get there. Not only is the Buddha in excellent condition, but the grounds and gardens are beautiful. 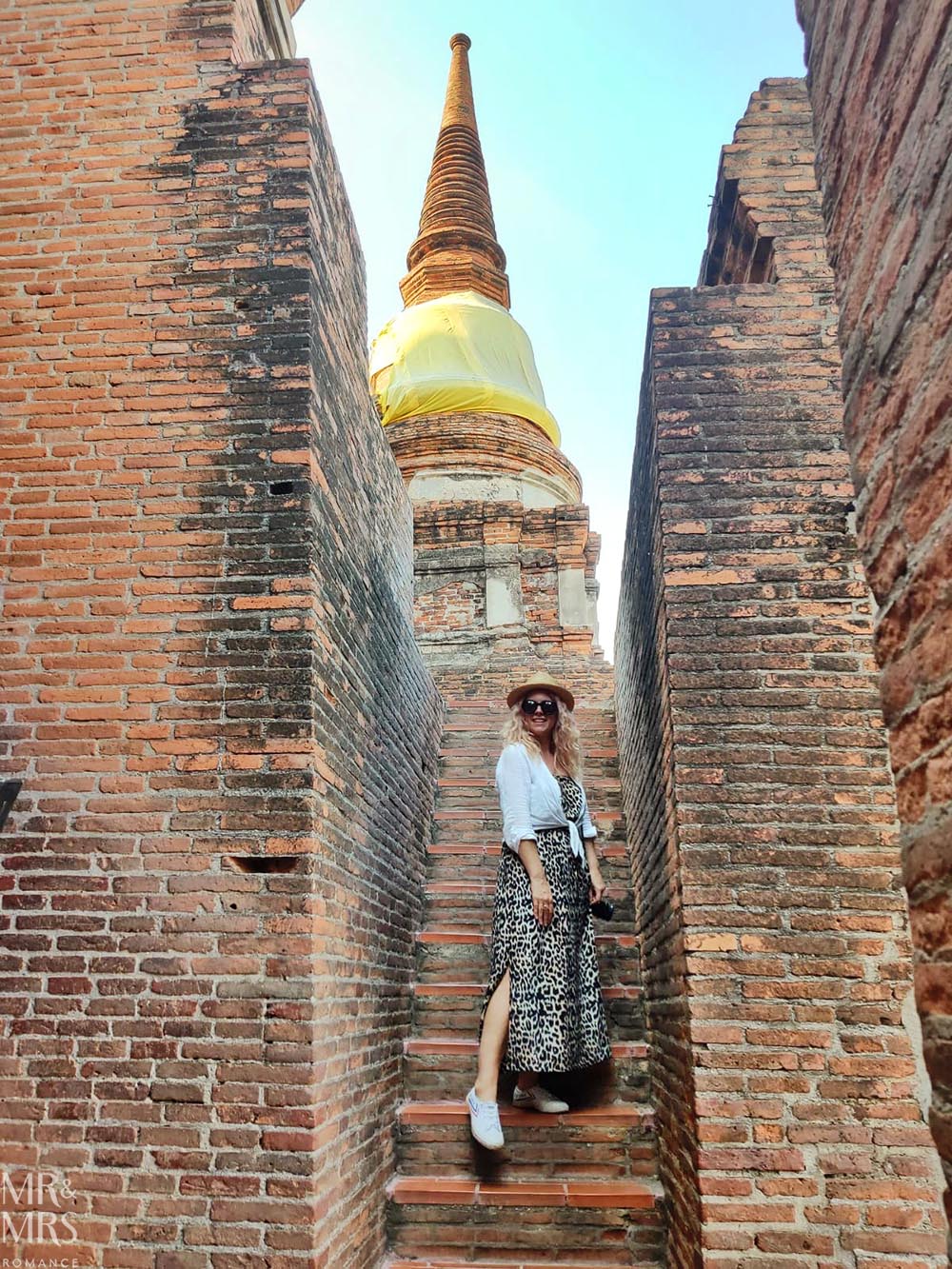 There’s also a huge pagoda you can walk up and go inside. Views from its walls out across the countryside and over the temple site are amazing.

Hot tip: the bathrooms here are the nicest you’ll find outside of hotels or restaurants! 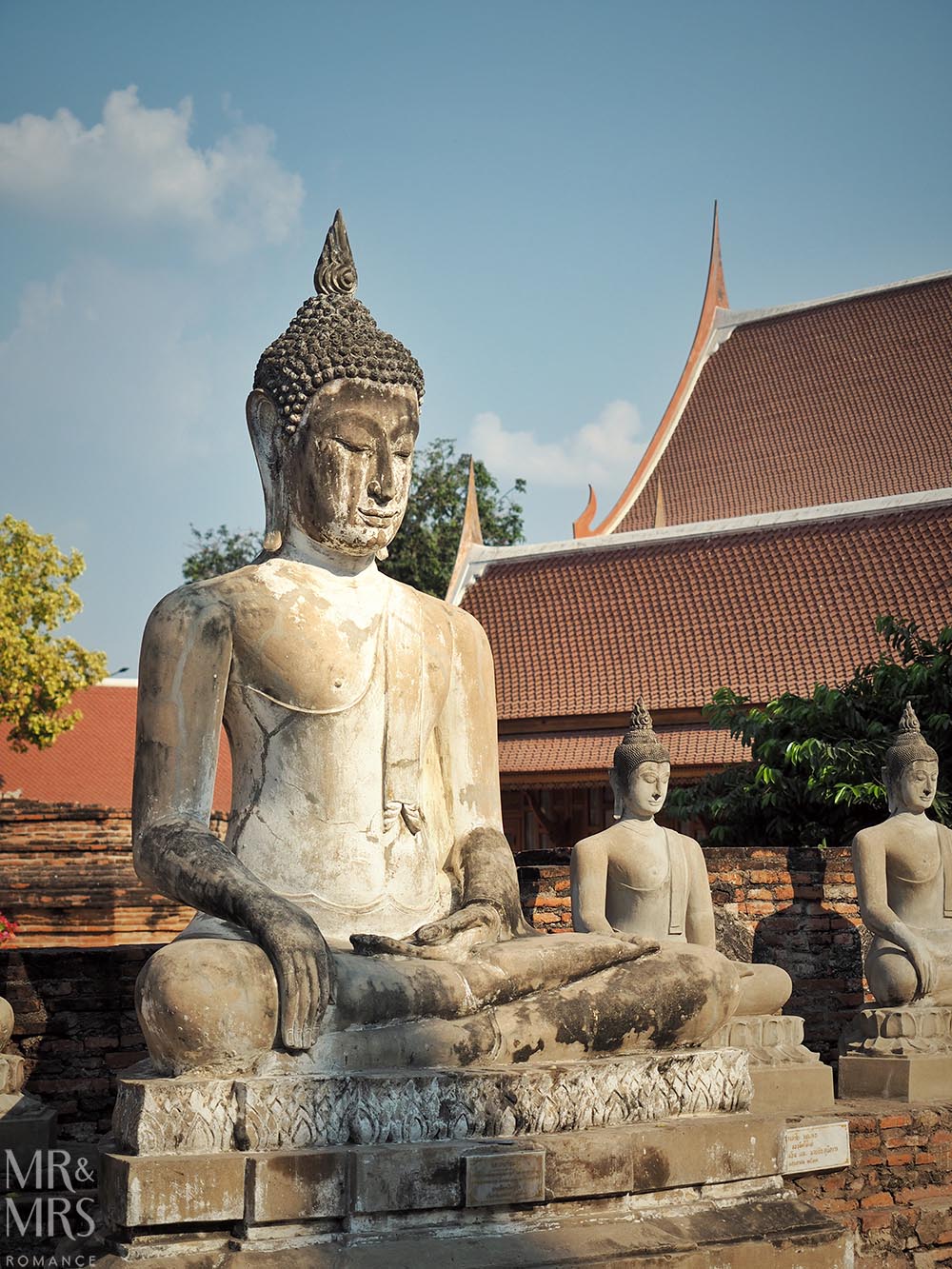 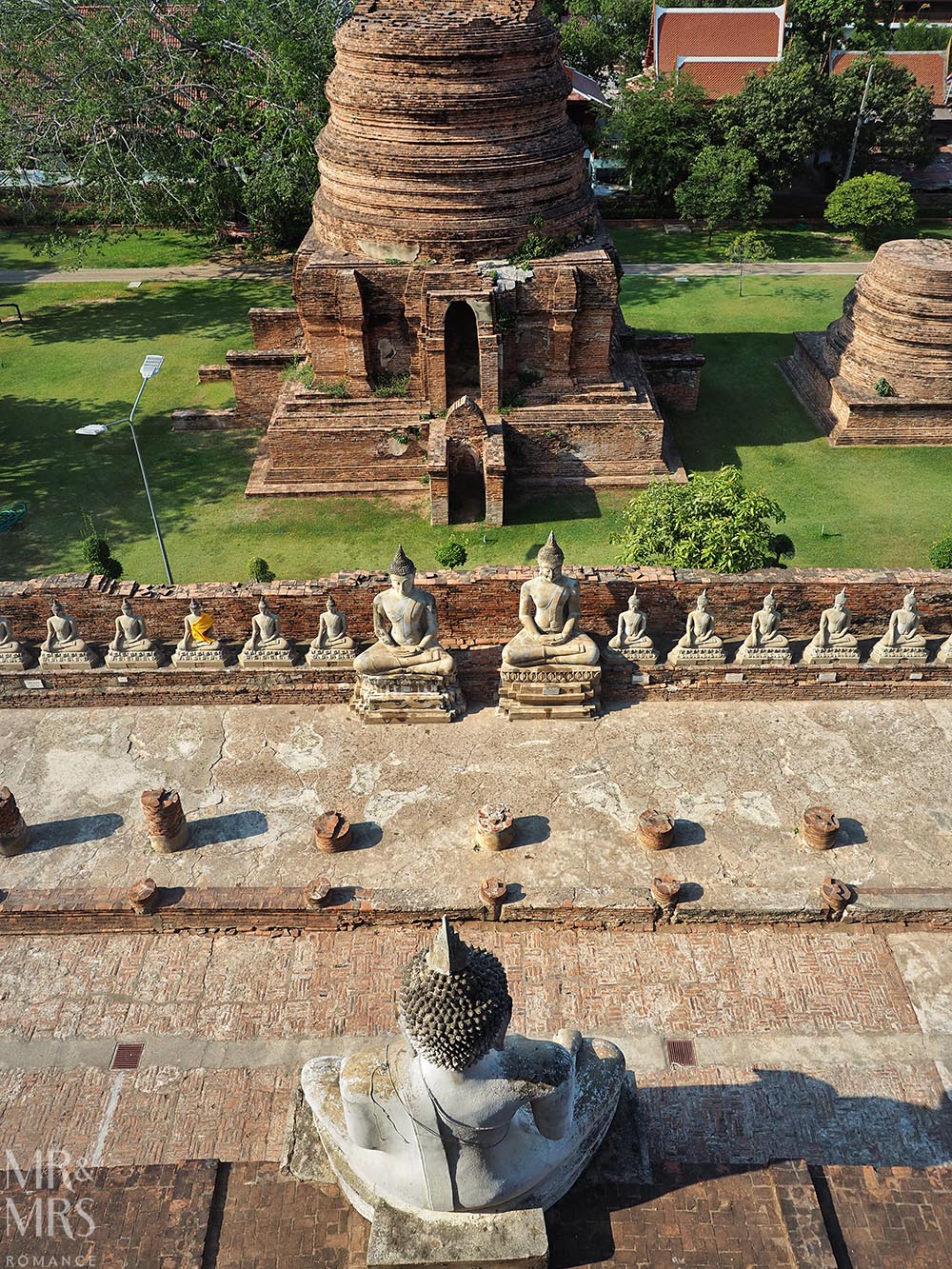 Wihan Phra Mongkhon Bophit – the most amazing site of all

This site is the most incredible of all the temples in Ayutthaya – perhaps in Thailand, and it comes in two parts.

First of all, visit the relatively modern-looking temple or ‘mondop’ with the pitched roof and pillars similar to most Thai Buddhist temples. Inside is one of the biggest bronze Buddha statues in the country at almost 17m in height with a 9.5m-wide lap and weighs about 64 tons. It’s also covered in about 350kg of gold leaf. 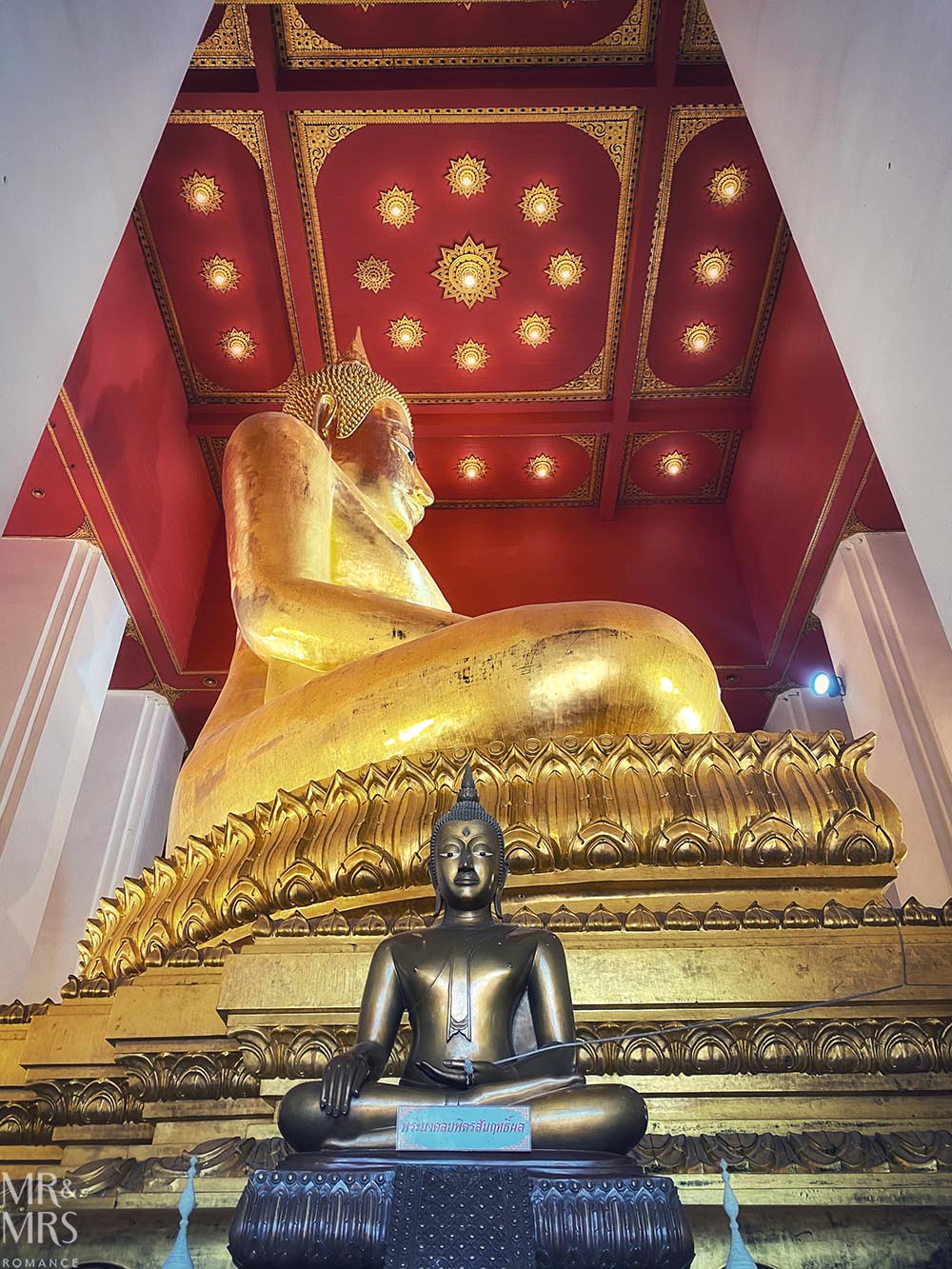 Outside the temple through a tall brick wall is the even more impressive Wat Phra Si Sanphet – the holiest, most important temple in the Kingdom of Siam.

The three dramatic stupa that line up in front of the ruins of where a huge chapel once stood. They are in fact burial sites of three past kings. 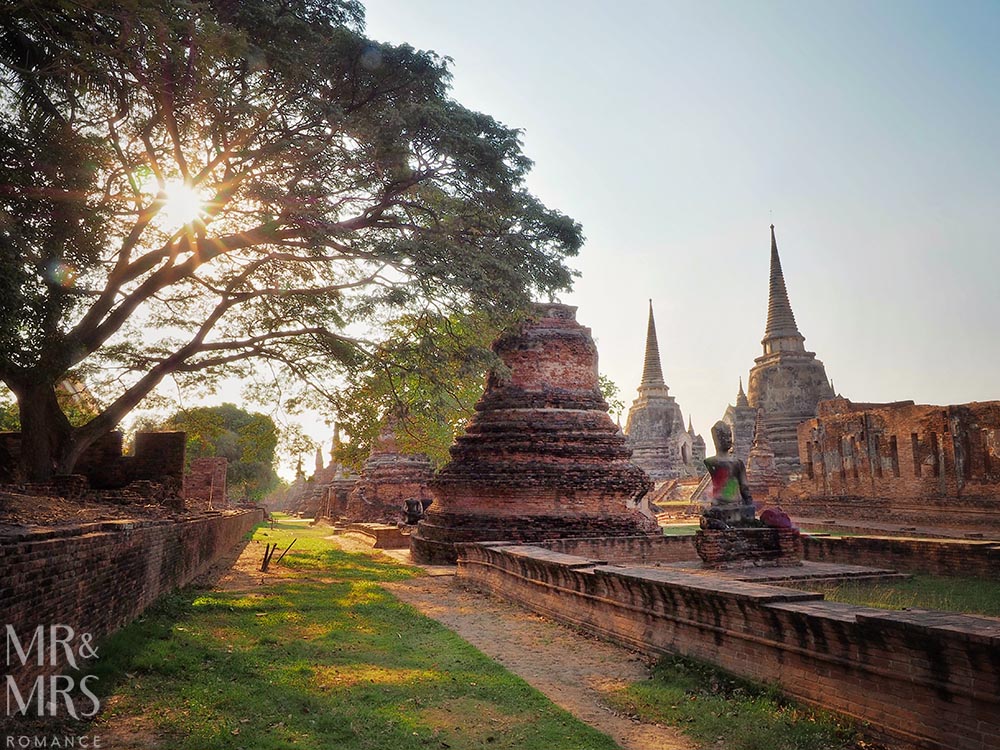 The rest of the grounds are beautifully serene, with dark-red brick walls and gardens throughout the complex.

It’s a magnificent place to visit – reinforced with a UNESCO World Heritage listing in its own right. 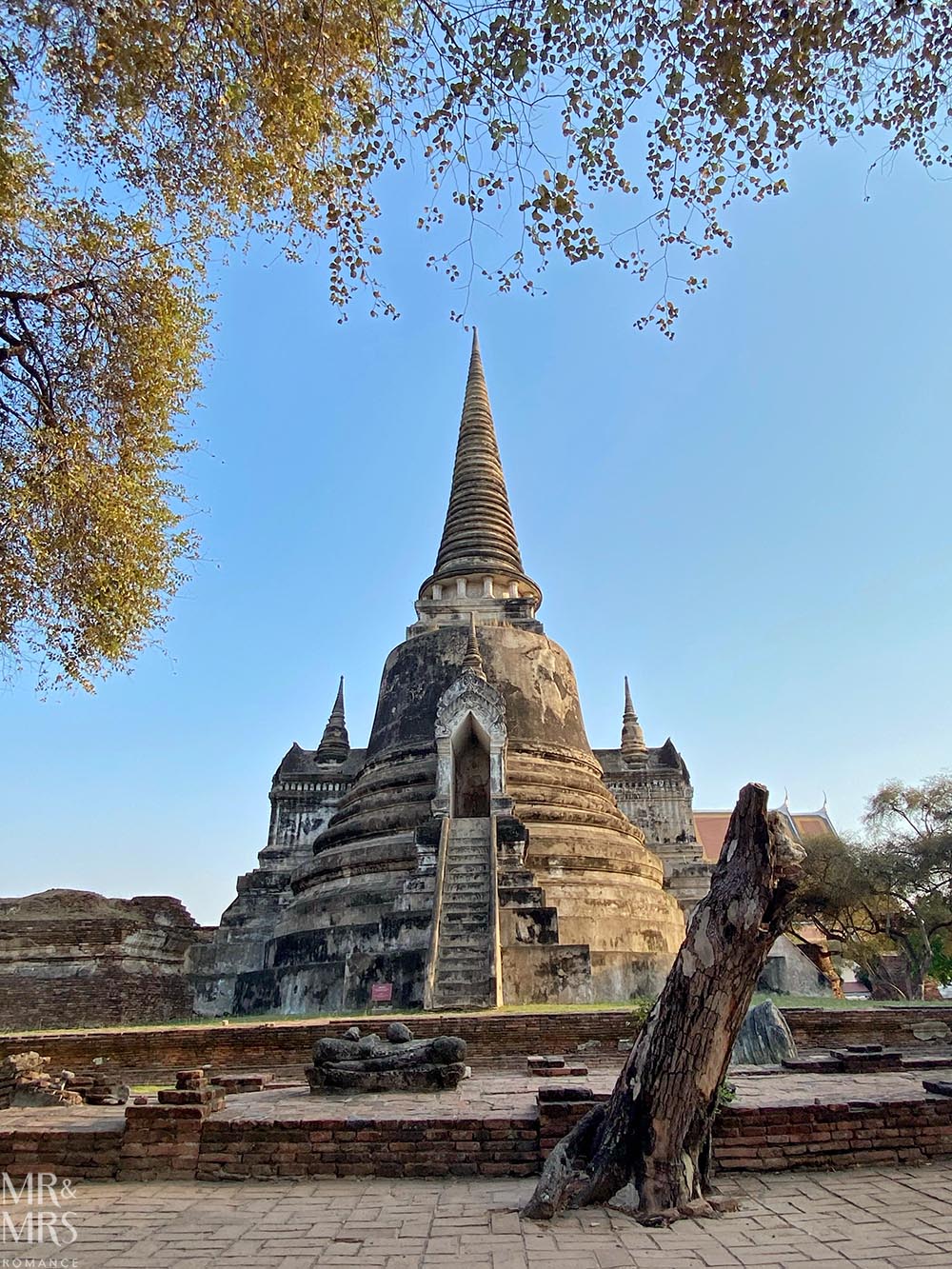 If you eat nothing else while you’re here, make sure it’s the famed giant river prawns of Ayutthaya. These monsters, with long blue pincers are best bought at the Klang Markets east of the city.

You can pick your live prawns – the bigger they are the more expensive – up to about TBH600 per kilo and you only get about two prawns for that. 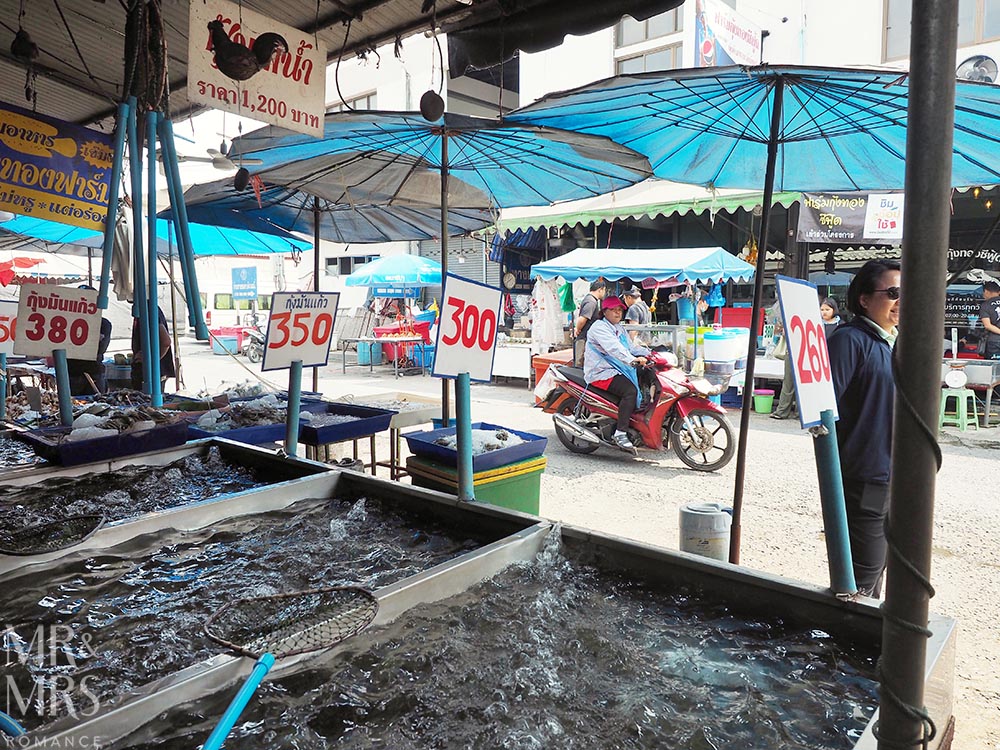 You can then go through the back of the market to a little cafe where they cook the prawns and bring them to your table – all in that price.

Don’t just have the prawns though. There are so many delicious things to eat here at the market. 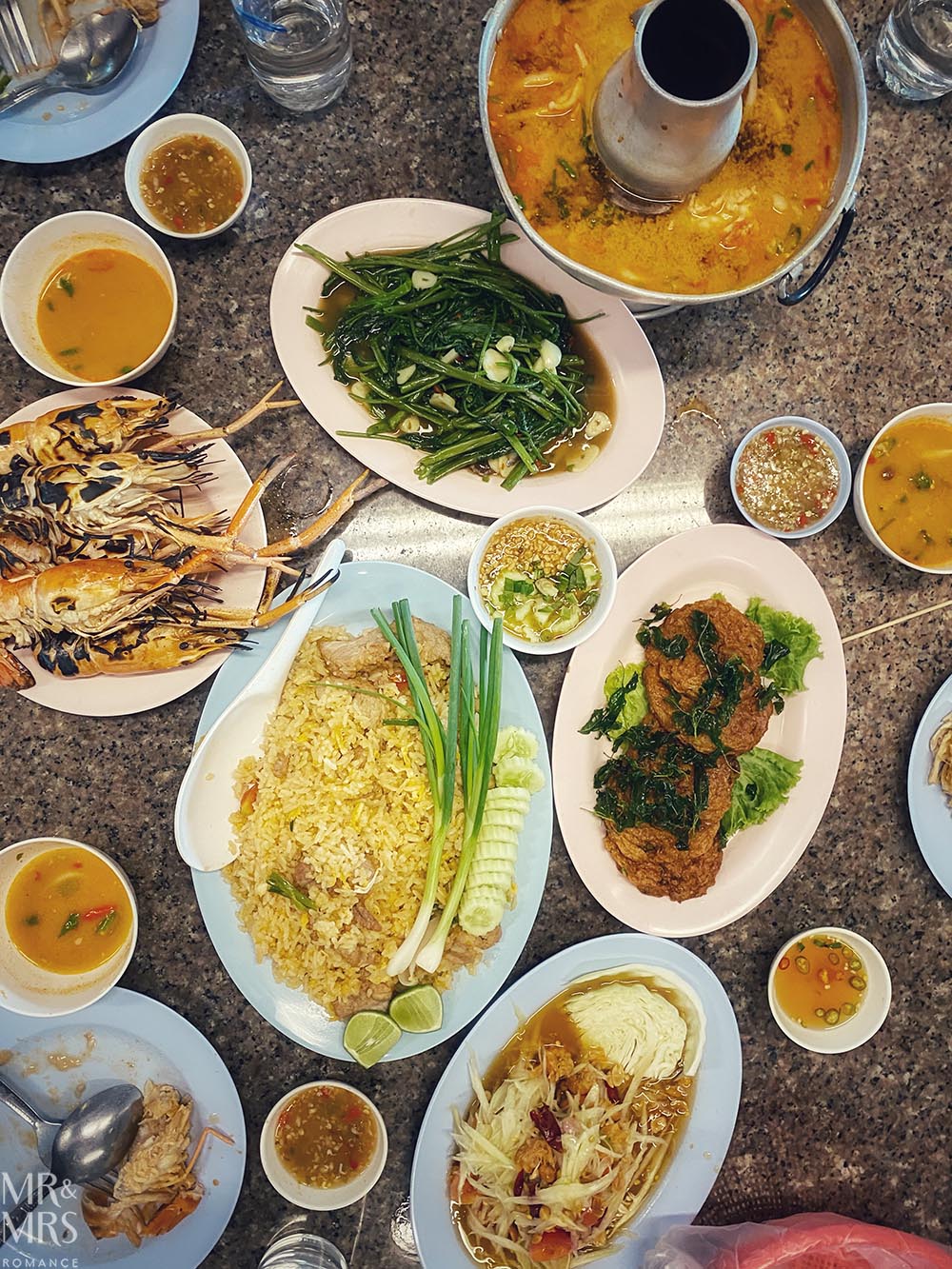 This fun pretty cafe wouldn’t be out of place in most western capitals, but its aesthetic isn’t the only trick up this cafe’s sleeve.

They roast their own coffee here – most of which is locally grown – and the cakes and treats are made in-house too.

A modern cafe serving traditional sweets in an ancient town. 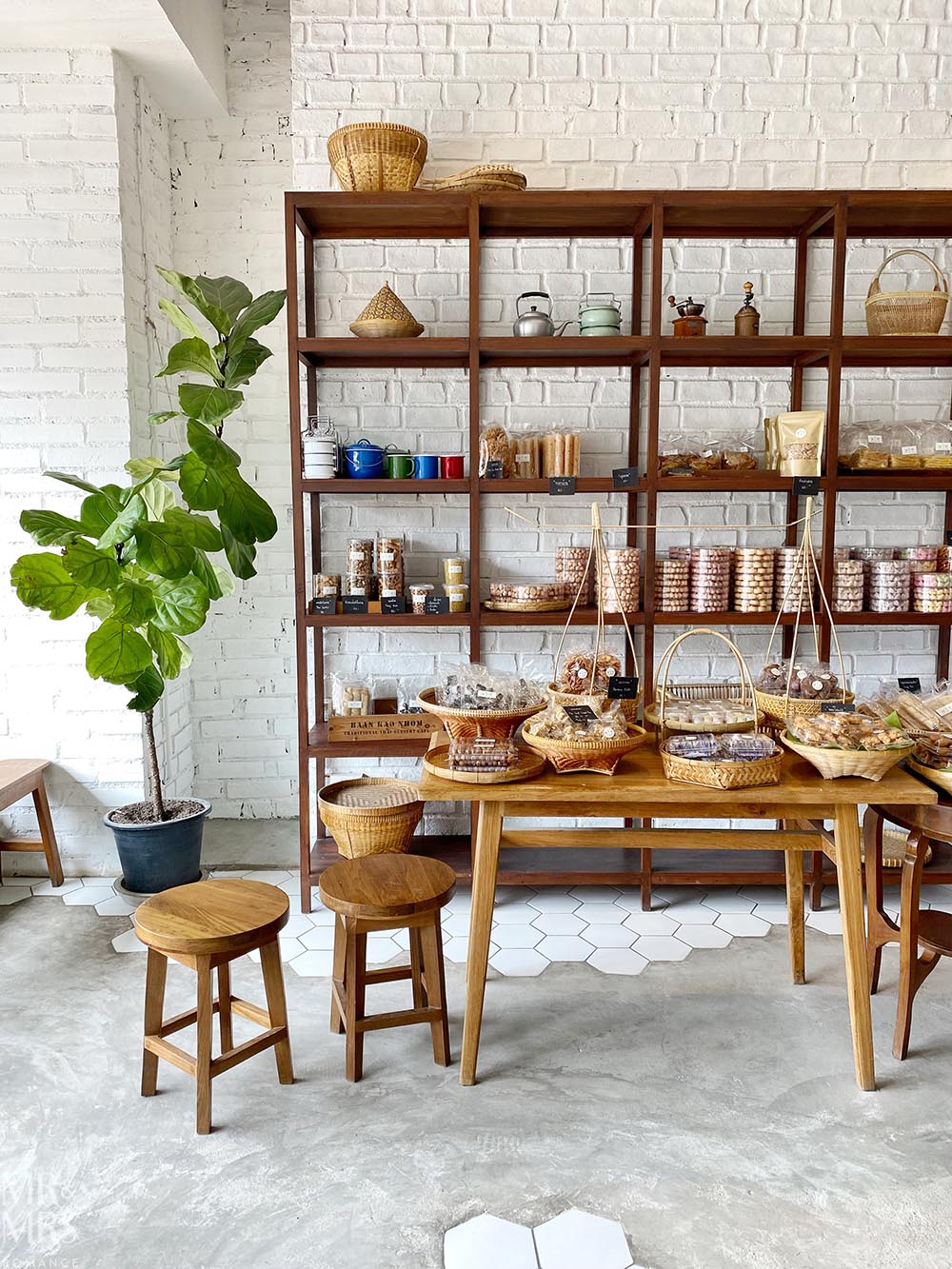 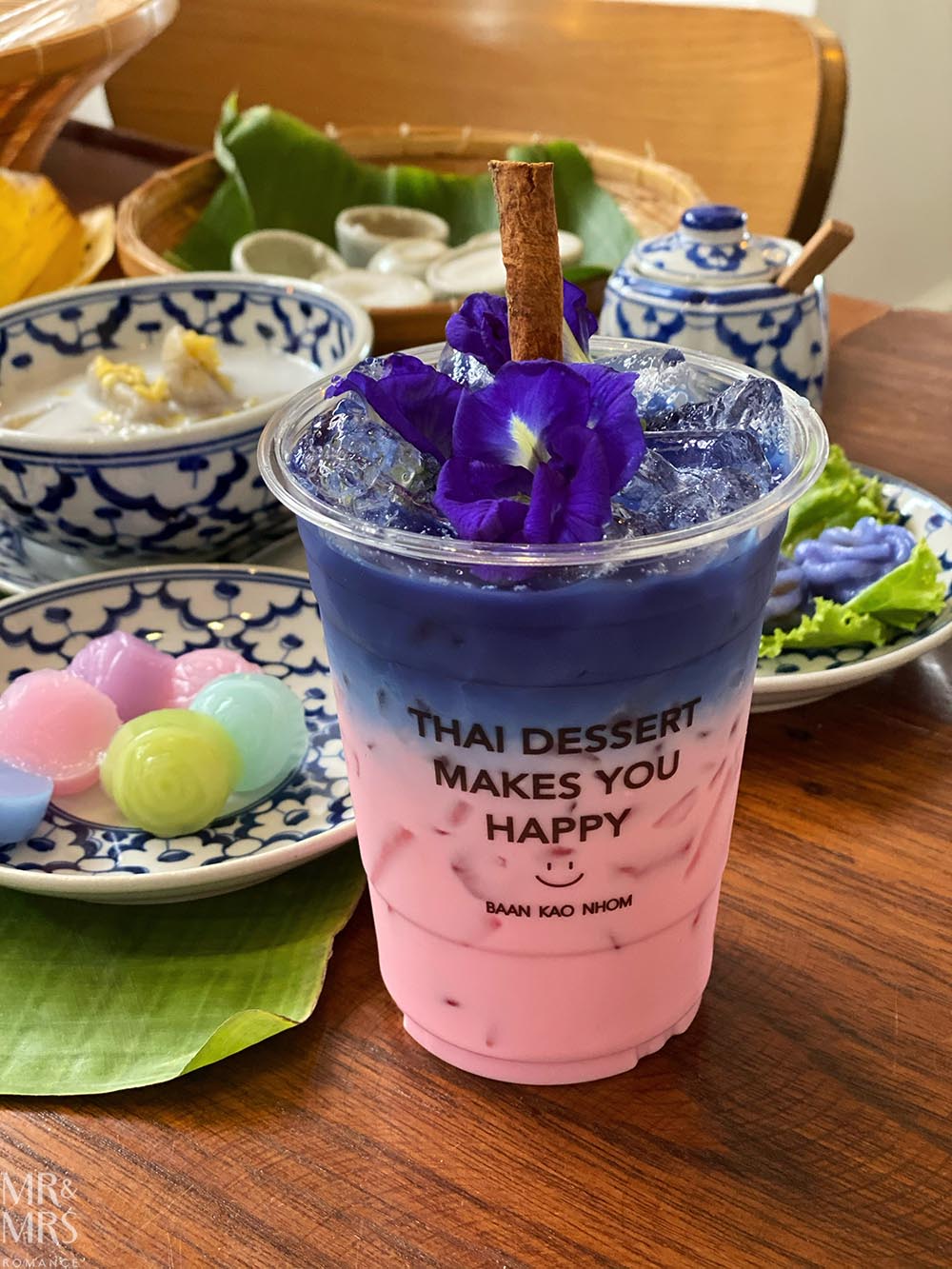 This elegant restaurant backs right on to the Chao Phraya River – the very same river that flows through Bangkok. From the veranda you get beautiful views of the royal palace and the ruins of Wat Phutthaisawan across the water.

The food here is superb – a mix of modern style Thai and traditional dishes. And plenty of fresh prawns and shellfish from the river too. 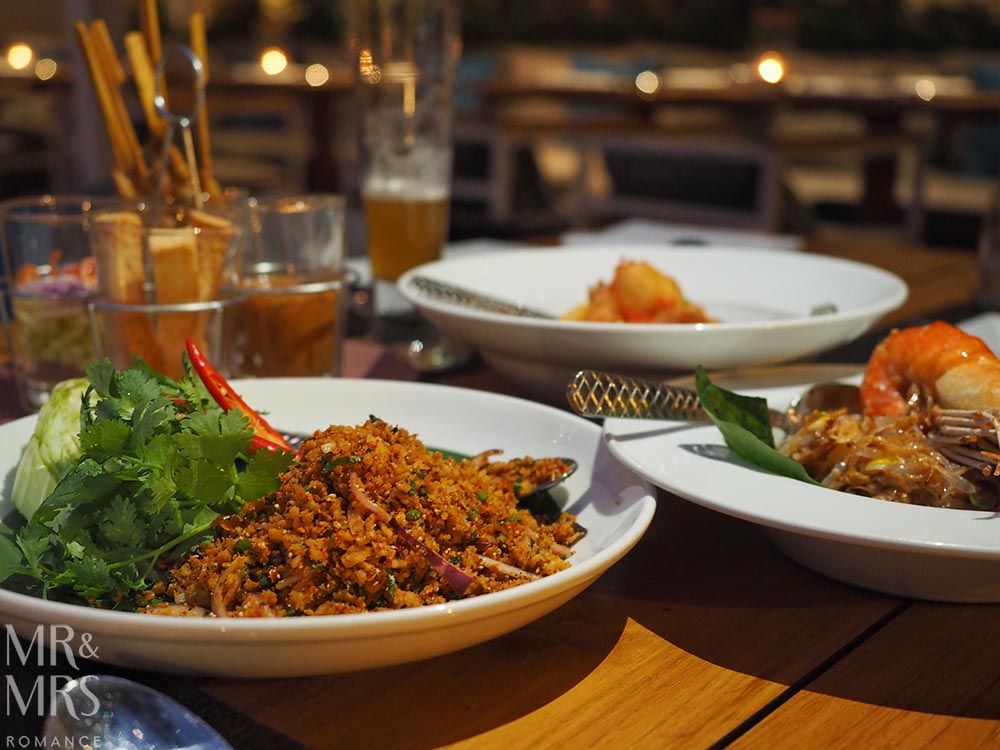 This hearty dish is a bit controversial as it contains pig blood. But if you can stomach the idea, you’ll be rewarded with a rich, spicy soup that’s so good. I love this dish but didn’t realise that it originated here in Ayutthaya.

Where to stay in Ayutthaya

Sala Ayutthaya – right on the river – is a stunning hotel. Its entrance is complimented with a small art gallery and the walls through to the veranda make for an impressive welcome.

A cross between post-modern surrealism and ancient Thai temples, the curving walls are made with the same style flat red bricks you’ve seen in the ruins you’ve explored during the day. 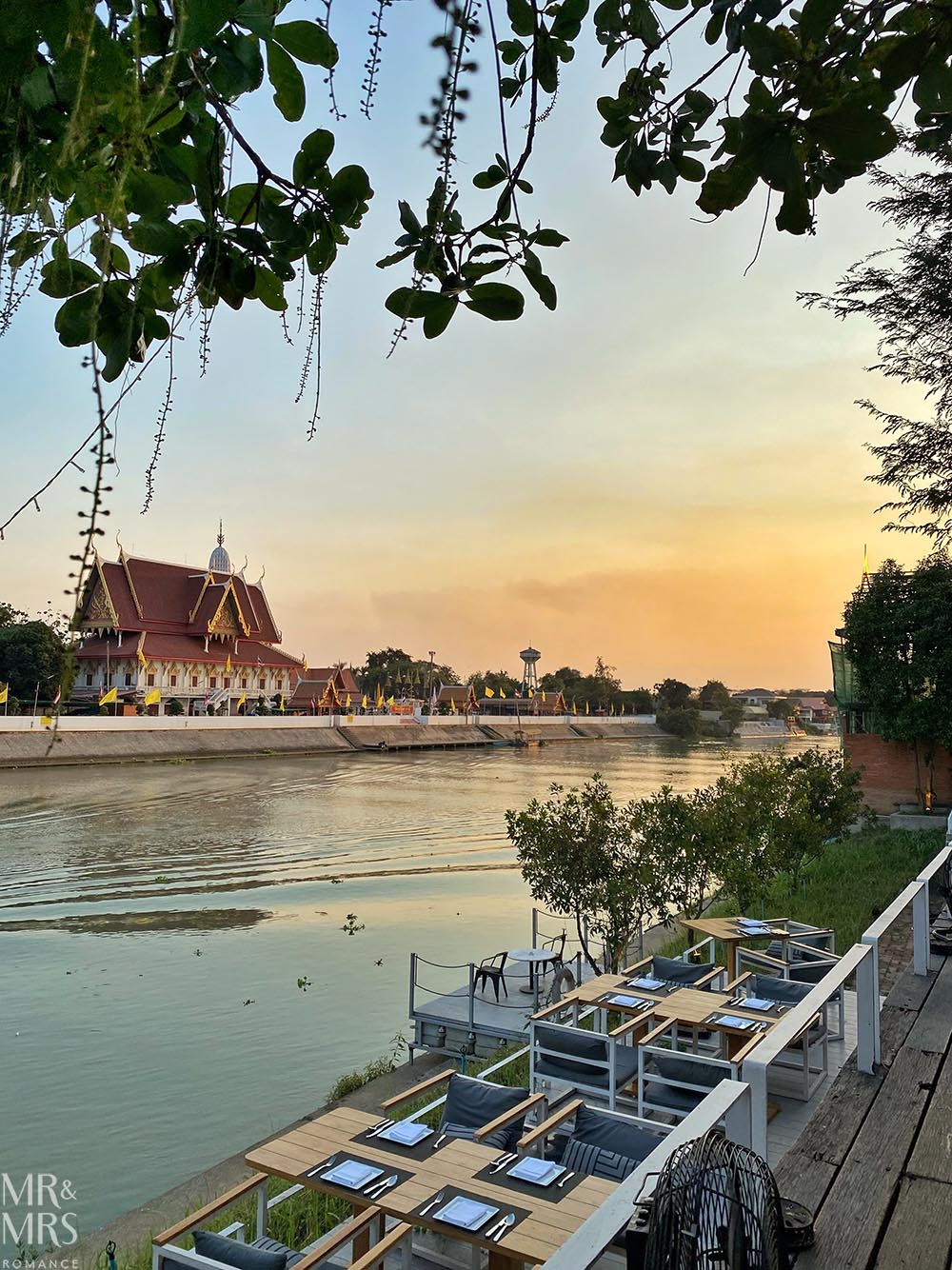 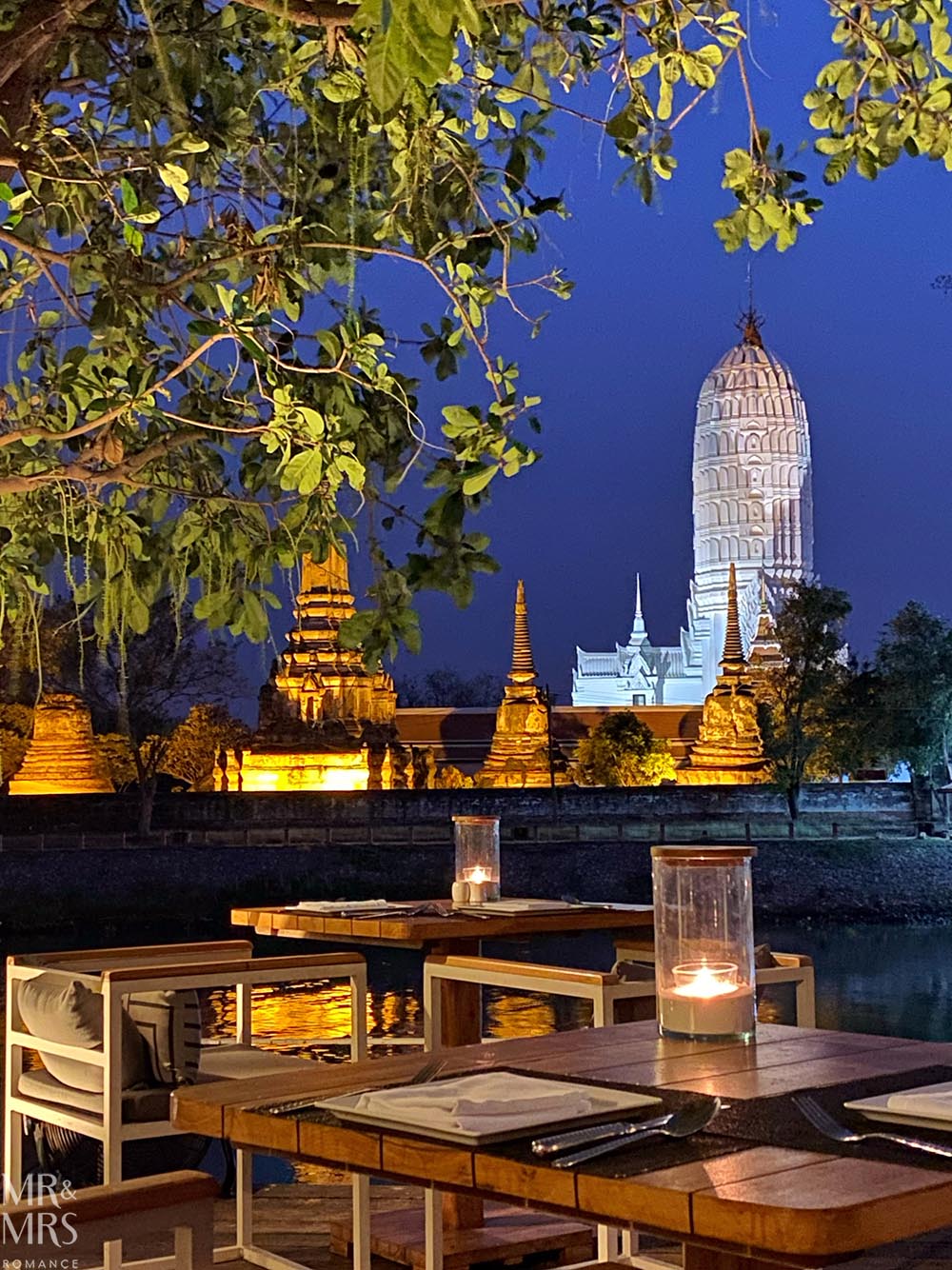 Rooms are industrial chic with lofted ceilings, vast bathtubs, and beautifully minimalist fittings and decoration. And as we mentioned, the food here is excellent.

We stayed in the beautiful Sala Phuket – the sister hotel on the beach you can read about here.

There are plenty of other places to stay in Ayutthaya, but this is the only one we’ve experienced. But being so close to Bangkok, Ayutthaya is the perfect day trip destination.

Our best advice is to get a tour guide to take you there. We travelled with Absolutely Fantastic Holidays, which – as the name suggests, was excellent.

Our day tour from Bangkok included a minivan for the whole trip – Ayutthaya’s only about 80km north of Bangkok.

They have a number of multi-day tours that take you through a few other places including Ayutthaya which also look brilliant. 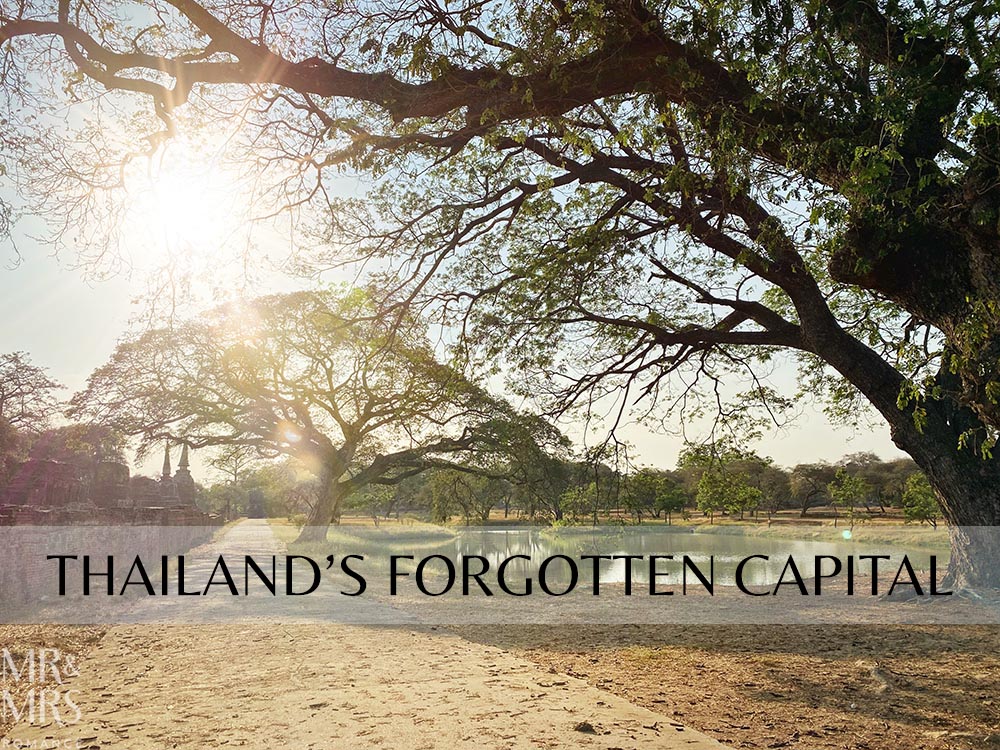 It’s possible to hire a car and drive to Ayutthaya – it should take about 75 minutes from Bangkok. But Driving in the capital is a real risk. Getting lost, traffic, hire car scams and of course the sheer danger of the roads makes it a much less compelling option.

How to get to Ayutthaya on public transport

There are public transport options for Bangkok to Ayutthaya, but it’s complicated.

It should take about 90 minutes to get to Ayutthaya by bus and train… if everything goes smoothly!

Once you’re in the city itself, it shouldn’t be too hard to find a taxi or motorbike taxi to take you around.

If you enjoyed this story, you should check out these too:

The secrets of the Flower Market, Bangkok
11 reasons to visit Chiang Mai
How to spot a safe elephant sanctuary

And here’s a link to our library of travel guides, articles and reviews on Thailand. 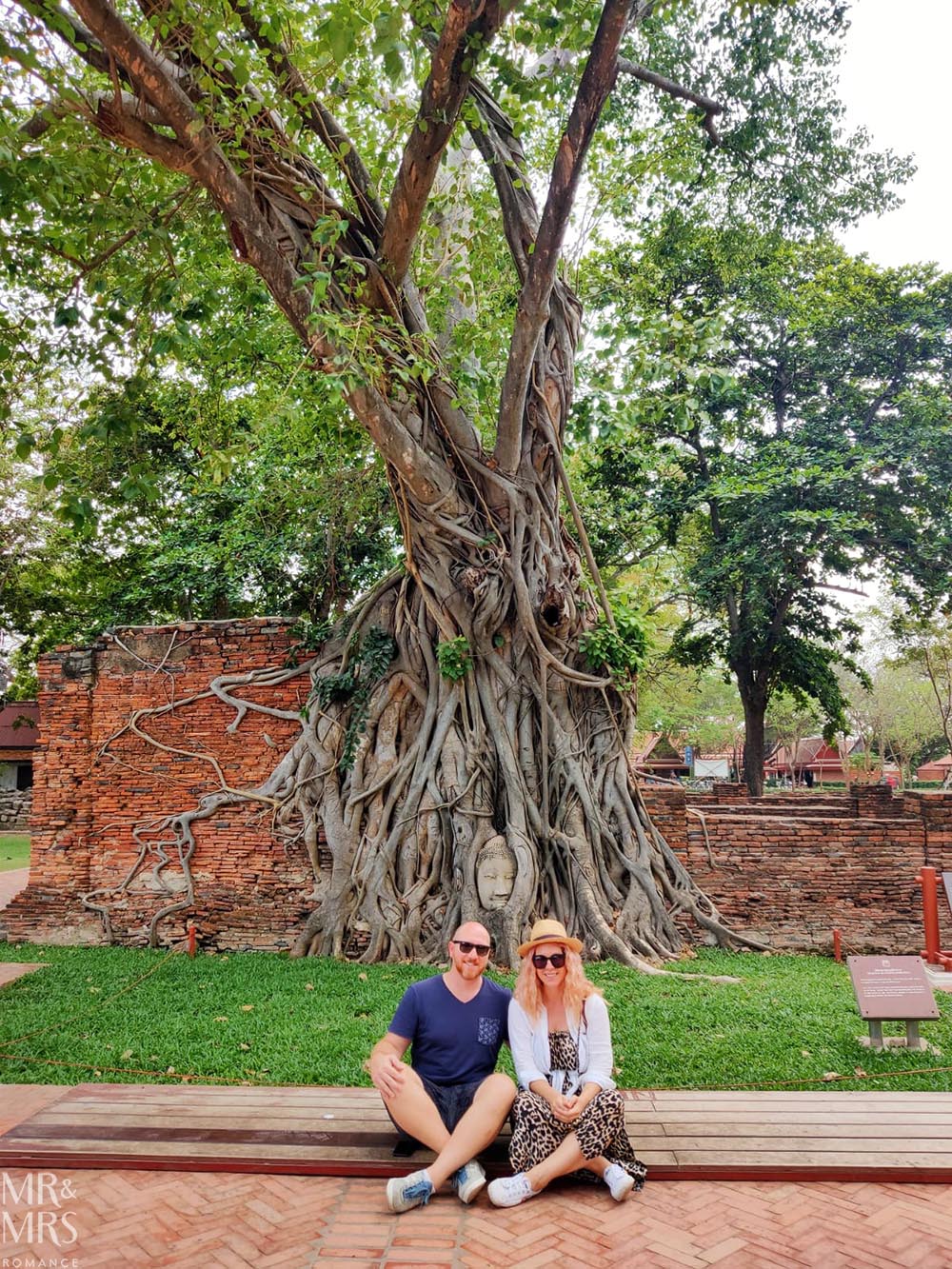 We travelled to ayutthaya as media with the Tourism Authority of Thailand.

Slick martinis, big burgers and a rainbow over Sydney

Have I read this right? Was last week really the last full week in September? I couldn’t believe it when I looked at my…