With 12,000 strips of sand decorating Australia’s 60,000km coastline, it stands to reason that beaches are key to the country’s culture. So as the summer fires up, here’s what to expect at the beach in Australia. 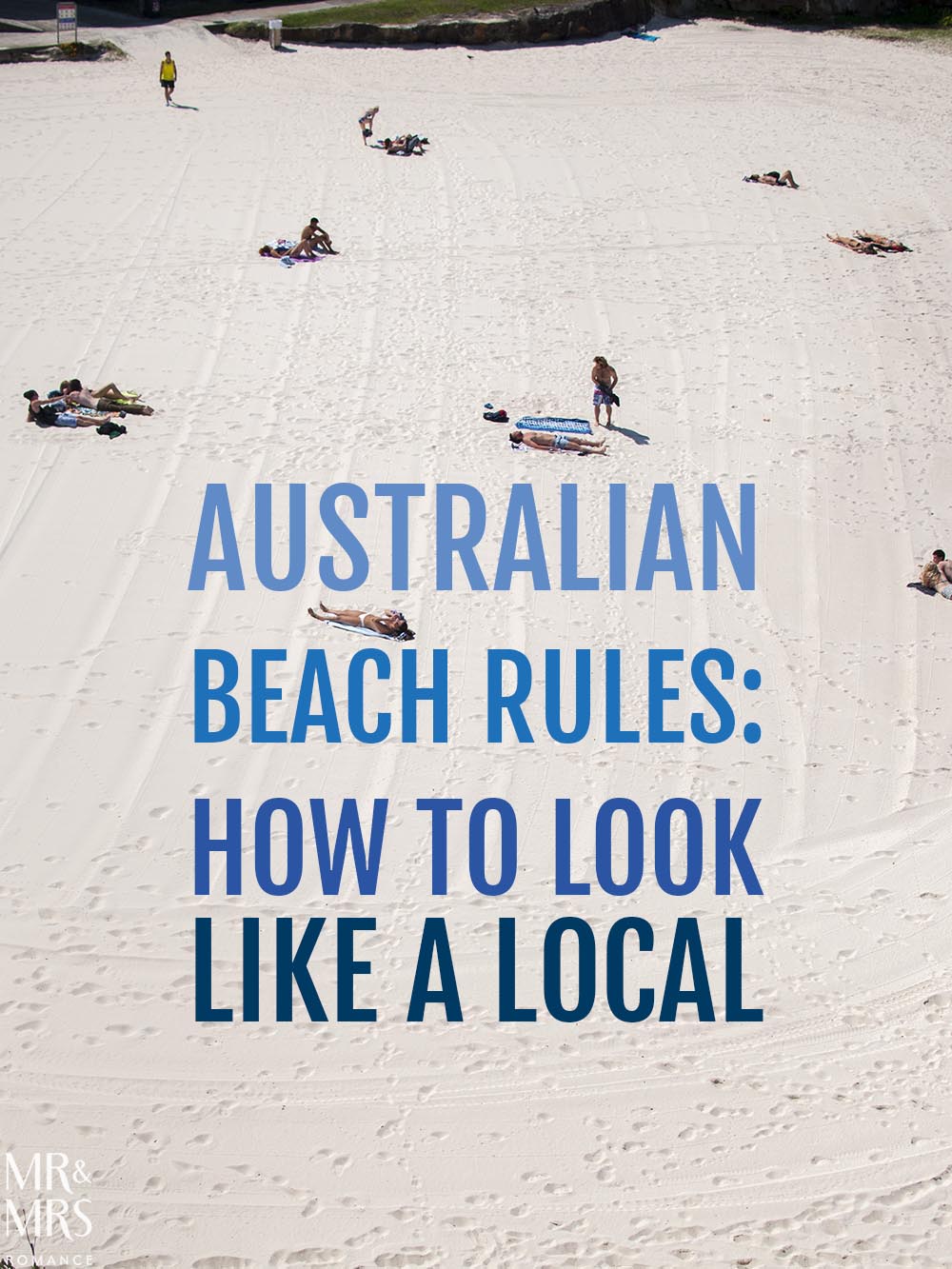 When I first arrived in Australia, I learned pretty quickly what was normal behaviour for the beach and what wasn’t.

Thankfully, I learned from watching locals and listening to Christina’s sage advice rather than making too many faux pas of my own.

But going to the beach in England or mainland Europe is a totally different experience to Australia, so it’s easy to get it wrong. 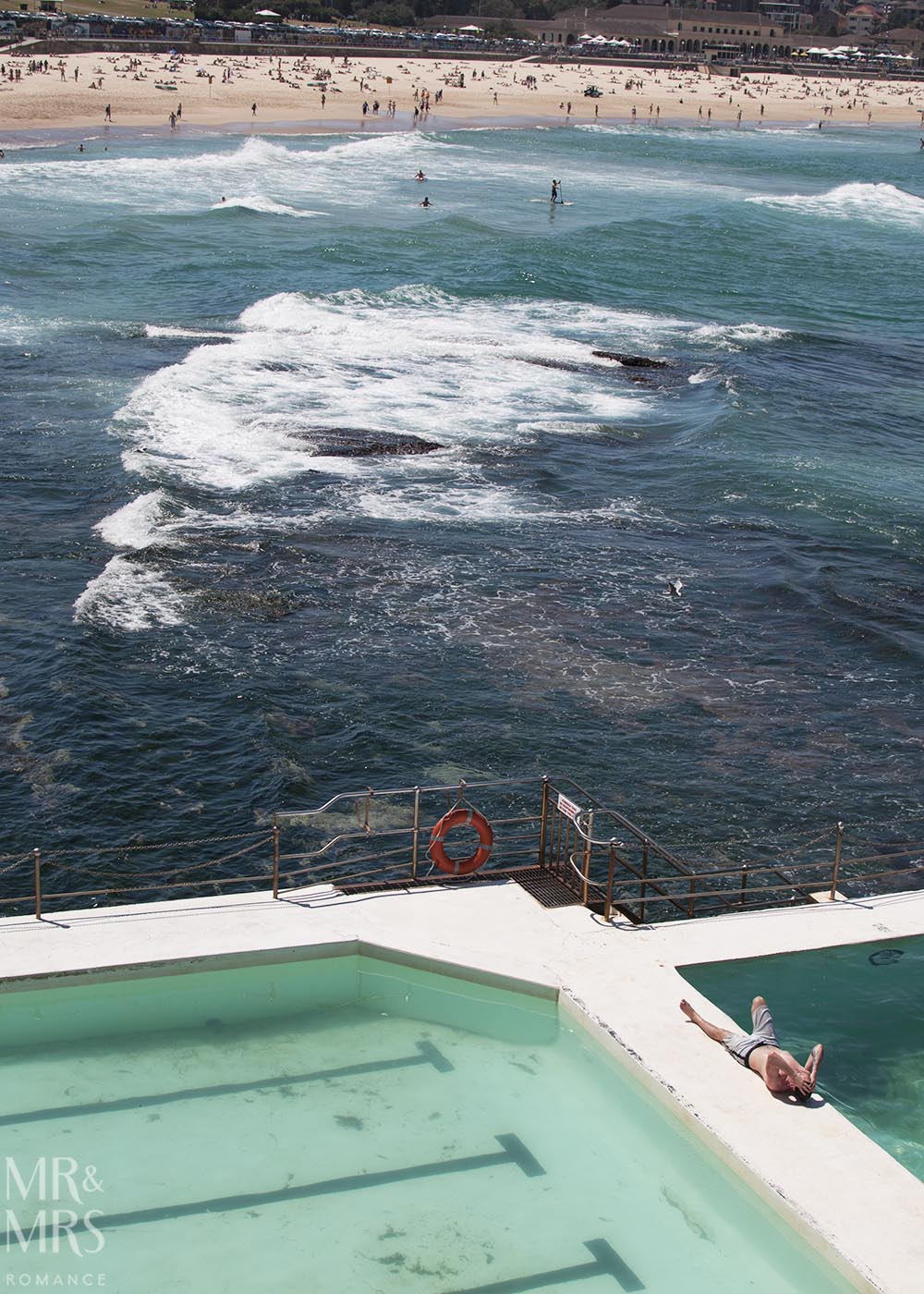 At best, you just look like a tourist or embarrass yourself. At worst, there are plenty of pretty serious dangers here that Poms like me wouldn’t have encountered before.

Yes, there are lots of creatures you can find at Australian beaches that are seemingly intent on killing you.

But there are other much more common hazards that don’t get nearly as much nor enough press. 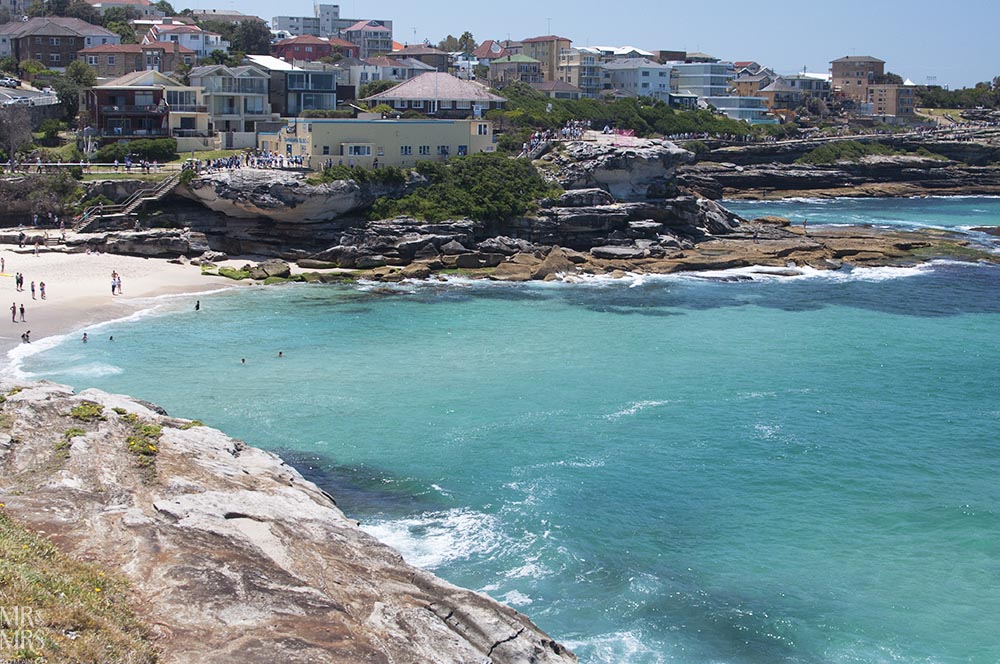 The best thing about Aussie beaches is they’re all free. Almost all the coastline around places like Italy is privately owned and you need to pay to visit a beach club.

Places like the Amalfi Coast charge a fortune for loungers – over €120 for four chairs. And the beaches aren’t anything like the ones here.

Here are 3 Sydney beaches only locals know about to give you some inspo.

2. What to bring to the beach

The first thing I noticed was how little you need when you go to the beach.

You can make do with just a towel – especially if you’re going to be swimming more than lying on the sand.

In fact, top tip: get yourself a Tesalate towel like this one that absorbs a huge amount of water but is also sand proof.

On the other side of it, people bring tents, bags, eskies full of food and drink – it all depends on how long you want to be there. And how much you want to lug around.

But probably the most important thing to bring (other than swimwear!) is sunscreen. There’s very little shade at the beach and the Australian sun is notoriously powerful. 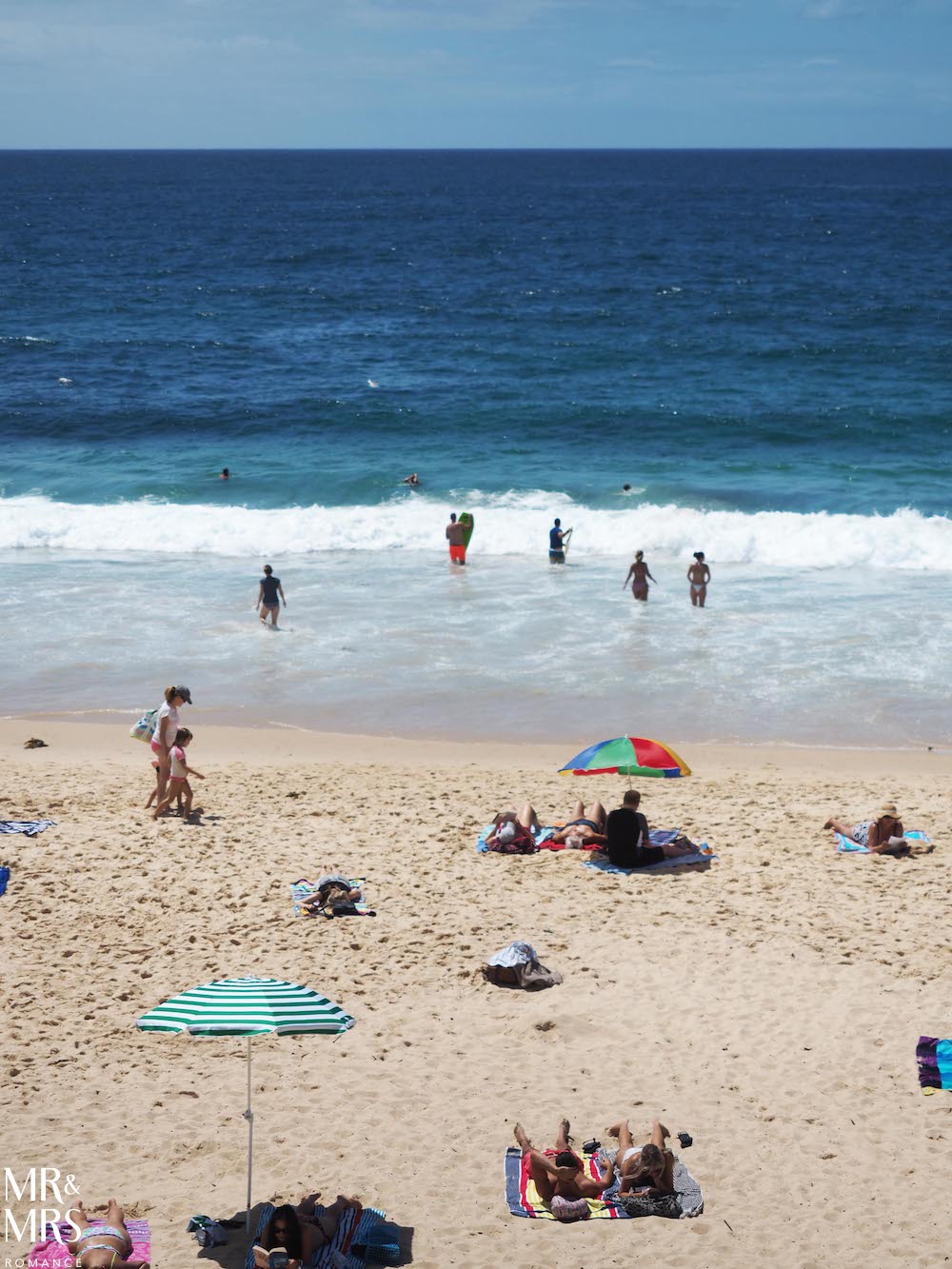 3. What not to bring to the beach

Locals don’t usually bring a barbecue or cooking gear to the beach, and lighting fires on the beach is illegal in most places. Having said that, there are often coin-operated public barbecues you can use near the beach. Just remember to clean up when you’re done.

Big music systems – a little speaker if you’ve got some good tunes is okay, but the sound of the ocean’s much better. 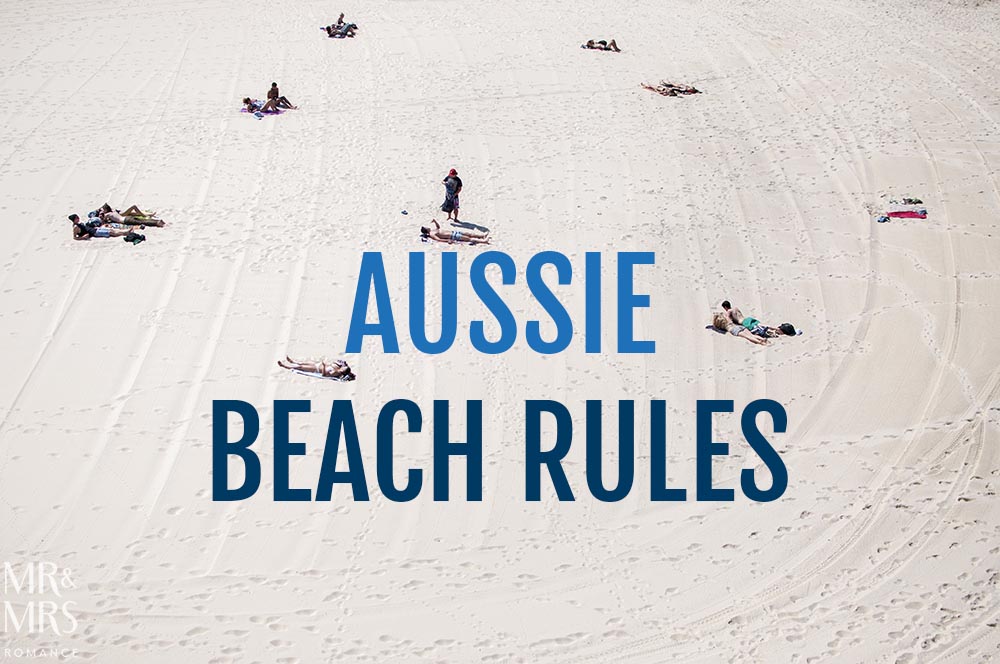 Jewellery – Australian beaches are really low-key, so don’t dress up. Plus we’ve had a few friends lose their wedding rings in the surf, so be careful!

Booze – most Aussie beaches are alcohol-free zones. Having said that, if you’re discreet, a couple of beers won’t be a problem.

4. Swimming between the flags 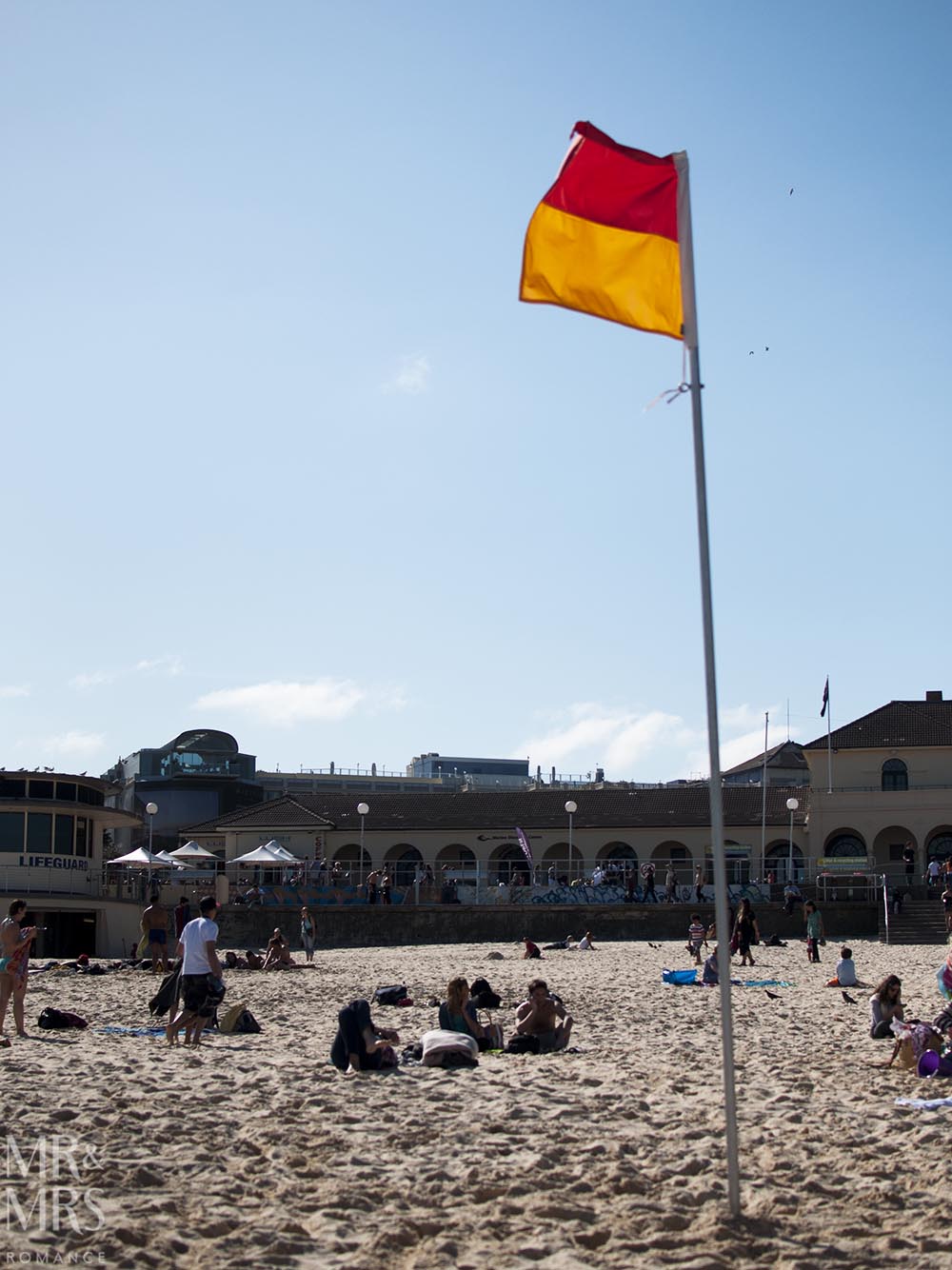 Every patrolled beach in Australia – that means beaches with surf lifesavers manning the beach – uses the flag policy. The red and yellow flags you see at the water’s edge tell you where is safe to swim and the zone the lifeguards are patrolling.

If you swim outside the flags, you’re open to rips, sandbanks, rocks and surfers. The lifies will probably get annoyed with you too, which can be quite embarrassing.

If there are no flags, either the beach is not patrolled so you’re swimming at your own risk, it’s too late in the day and the patrol has gone home or conditions are too dangerous.

The closer the flags are together usually means the stronger the seas are. 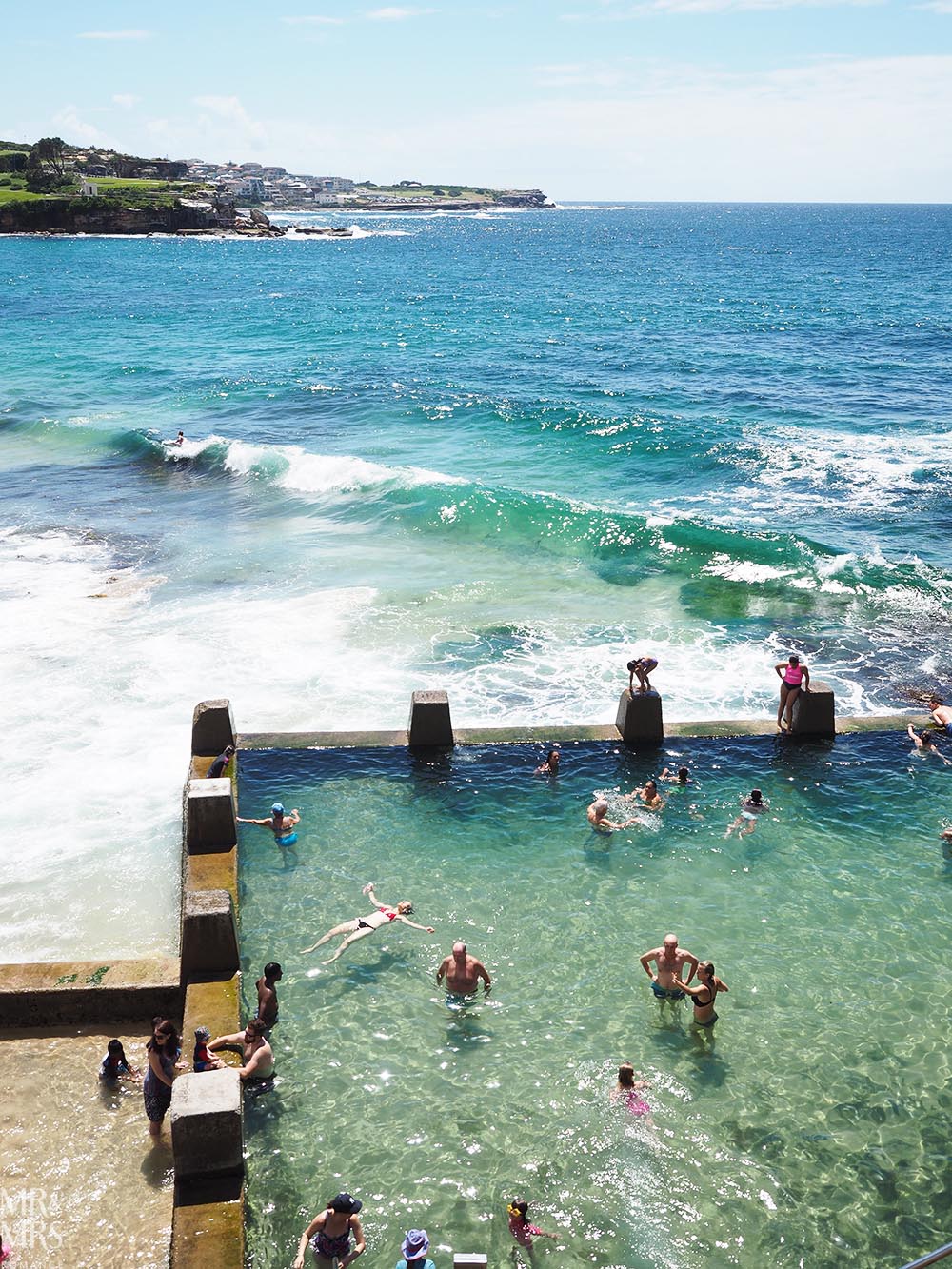 Rips are strong currents that pull you away from the shore. They occur where waves drain back out to sea creating channels. These channels cause a lot of water to move very quickly away from the beach.

If you find yourself being pulled out to sea in a rip, don’t panic. Don’t try and swim directly back to shore, you’ll never make it.

You have two choices: either relax, let the current carry you until the rip dissipates then swim back to land or swim parallel to the beach across the rip and then make your way back to solid ground.

If you find yourself in a rip or in trouble in the water, hold one hand up in the air. This is the signal for the lifies to come and help. Splashing around won’t get their attention as quickly. 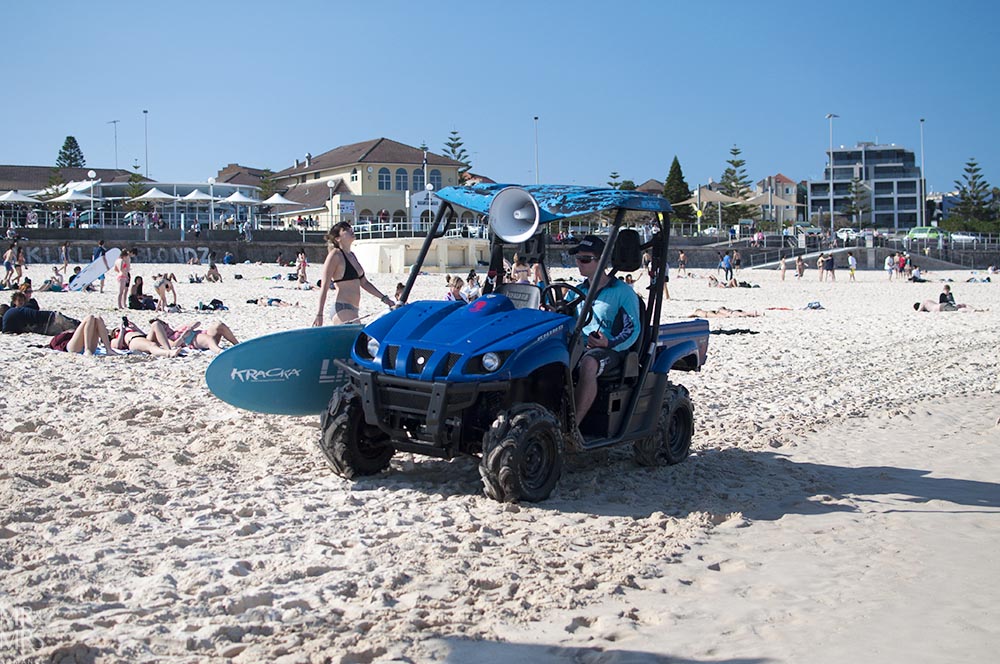 There are a lot of big surf beaches in Australia. For a lot of visitors, it’s very confronting to have to deal with these giant waves for the first time. Getting hit by a wall of water isn’t fun, especially if it rolls you over and drags you along the sand.

When you see a big wave coming, you have three choices: over, with or under. If you think the wave is small enough, you can dive over it.

If you time it right, you can sprint swim towards the shore, catch the wave and body surf. This is awesome, but takes a bit of practice.

Diving through the wave or ducking under it is your best option. Make a shallow dive into the face of the wave and lie horizontal in the water until you feel the wave pass over your feet, then bob up to the surface. Easy.

Alternatively, pinch your nose and duck down under the breaker to avoid getting rolled. 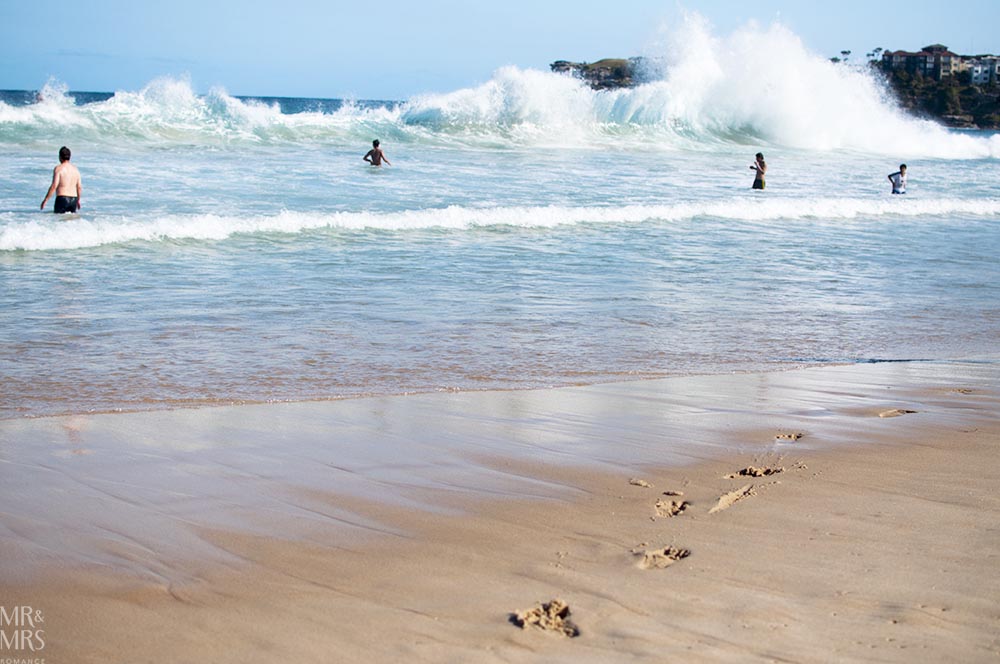 Poisonous octopus, poisonous jellyfish, poisonous snails, poisonous fish. Sharks, crocodiles, sea snakes… they all have the kit to take you out, but they’re not as common or as angry as they’re made out to be.

But there are dangers at the beach that are quite common that Aussies seem to know about innately.
Things like sandbanks that form around strong currents and rips shift and move very quickly. Avoid standing on or swimming near sandbanks. They can break up and leave you in deep water or strong currents.

Swimming between the flags will usually keep you safe.

For more tips on beach safety and tricks of the trade, check out our interview with Harries from Bondi Rescue. 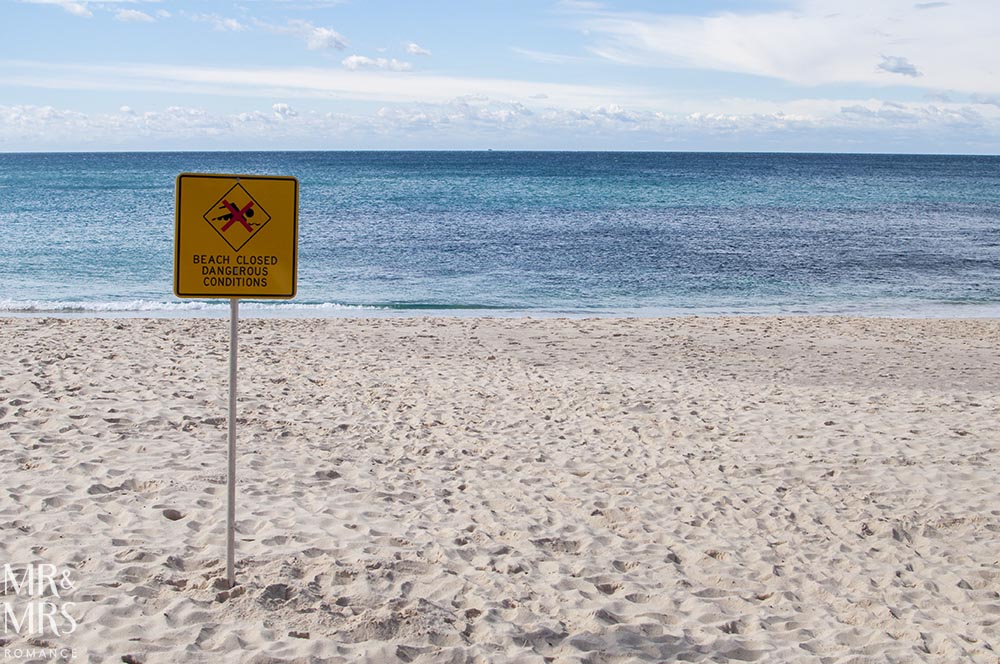 When it’s time to go, make sure you take everything with you. The beaches are public so leave your part of the beach the same way you left it. Please don’t leave cigarette butts in the sand. They’re gross and can harm sea life if they get washed into the ocean.

If the beach is busy, don’t shake your towel off too hard or you’ll cover people in sand. Pick your towel up, fold it sandy side in then give it a couple of careful shakes.

The majority of Australian beaches will have either a shower or foot tap (or both) to rinse off any sand and salt. Feel free to use them! 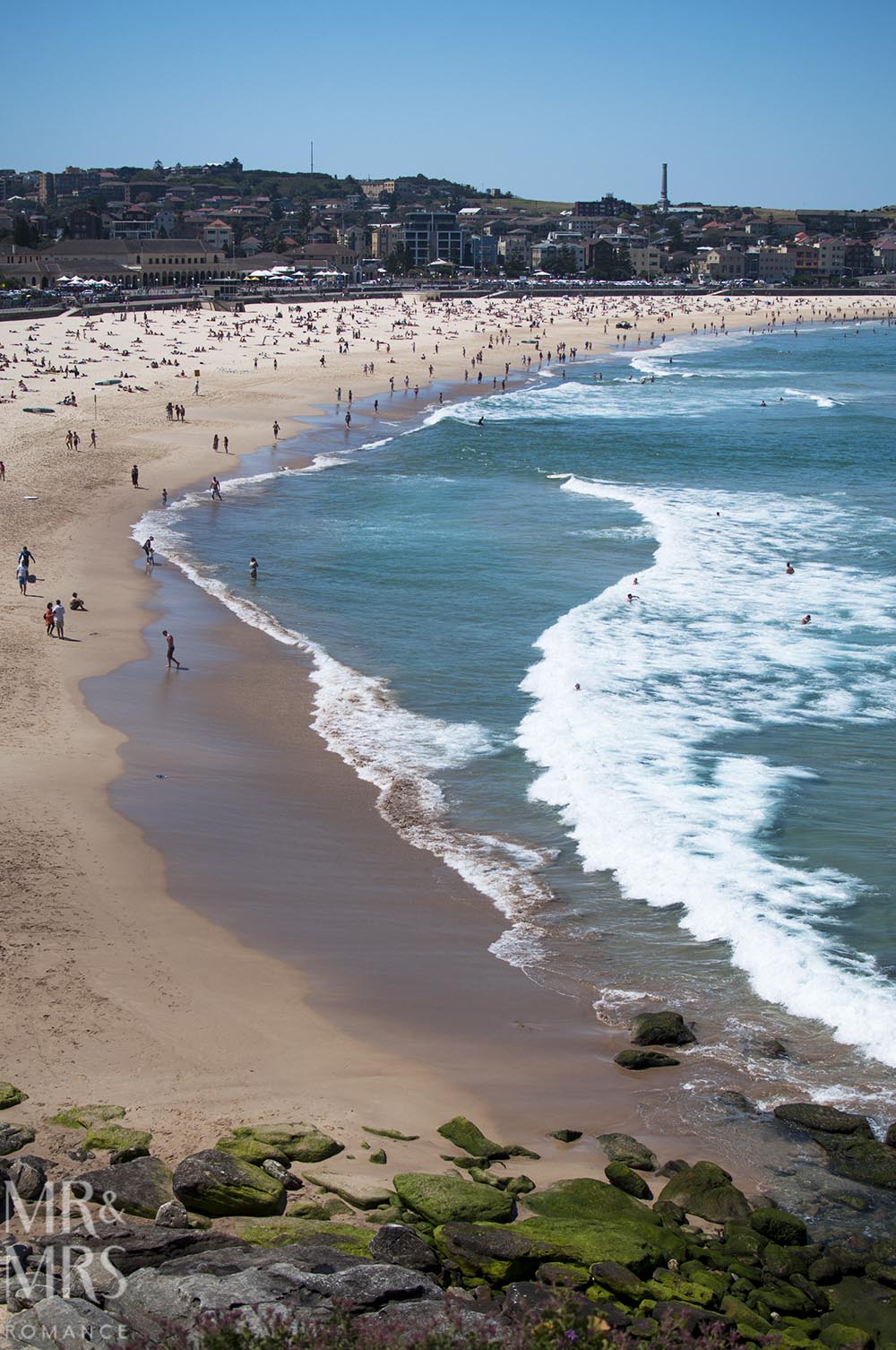 9. Wearing flip-flops at the beach

This is more of a pet peeve than anything.

I understand that the sand can get hot. But when it’s not, please don’t wear flip-flops when you’re walking on the beach.

As you walk, you flick sand up behind you all up the backs of your legs and also all over the people you’re walking past. It’s really annoying.

Don’t wear sneakers to the beach. My brother moved to Queensland in 2009. I think he still wears socks and trainers to the beach. Believe me – it looks weird. So pull off your footwear and get your toes in the sand. 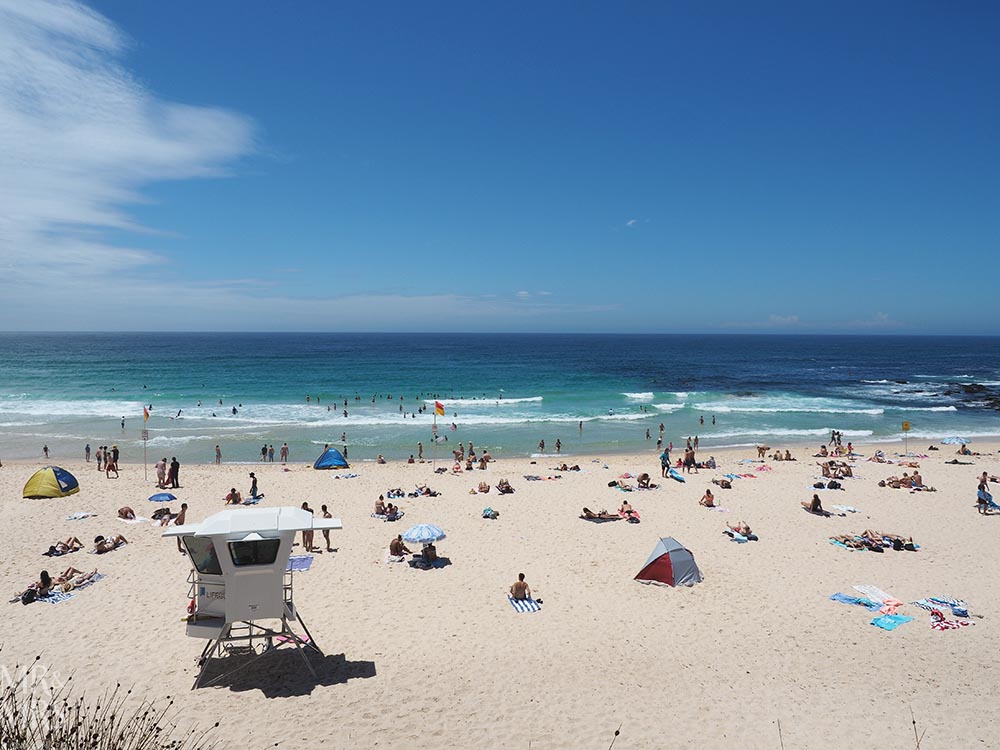 The most important thing to remember when you’re at an Australian beach is to have fun! We’re blessed with some of the most incredible beaches in the world and we’re proud to be able to share them!

What are your top tips for getting in some beach time in Australia? 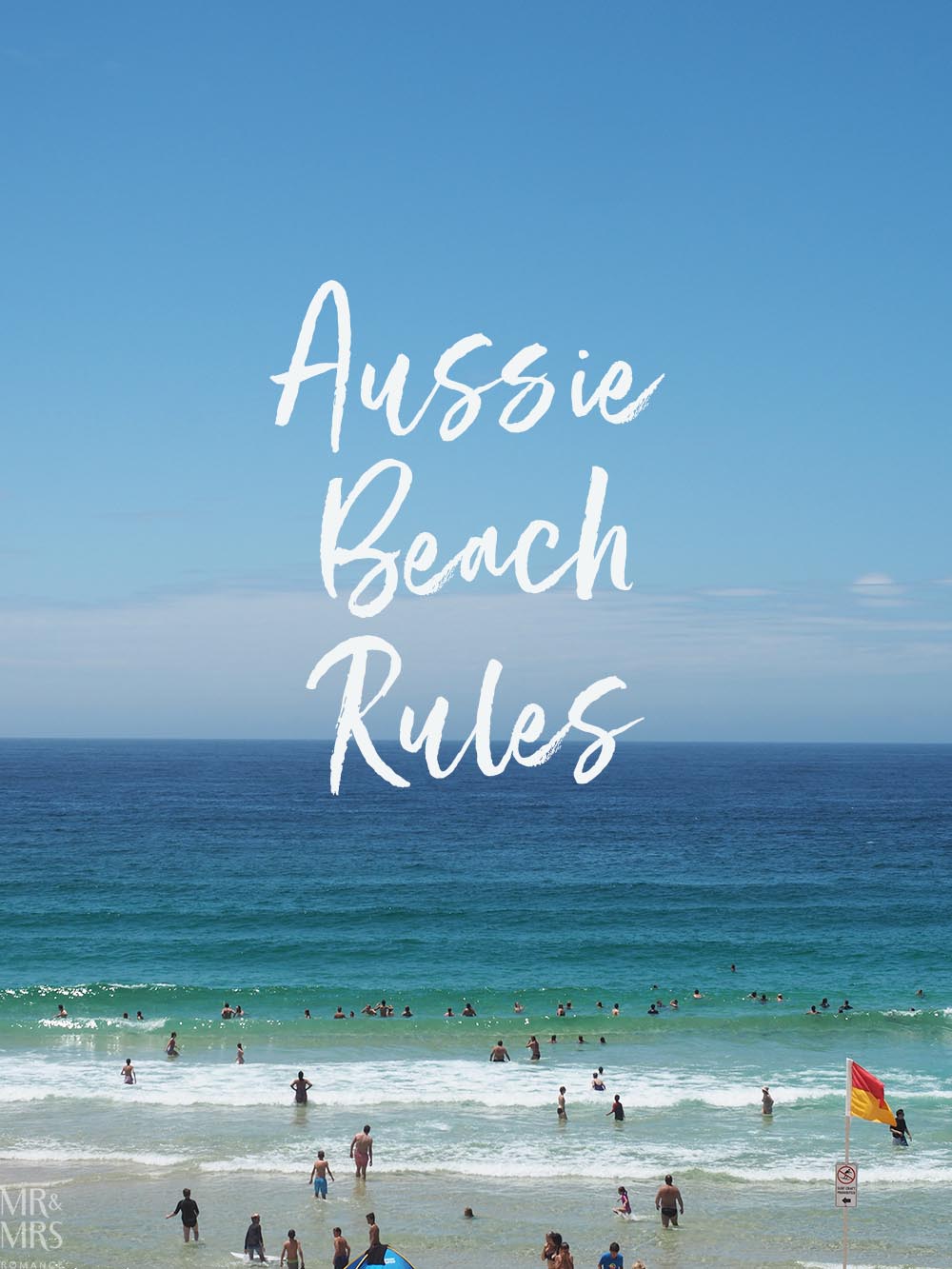 DIY Pompeii tour – how to get the best out of Pompeii

Nothing can really prepare you for Pompeii. The instant journey back in time as you explore its streets and houses, the clear picture you…