Italy’s Amalfi Coast is one of the most beautiful parts of the world. Golden red towns nestled amongst steep cliffs flow down to the shimmering blue sea. But before you book your flights, here are some things you should know about the Amalfi Coast. 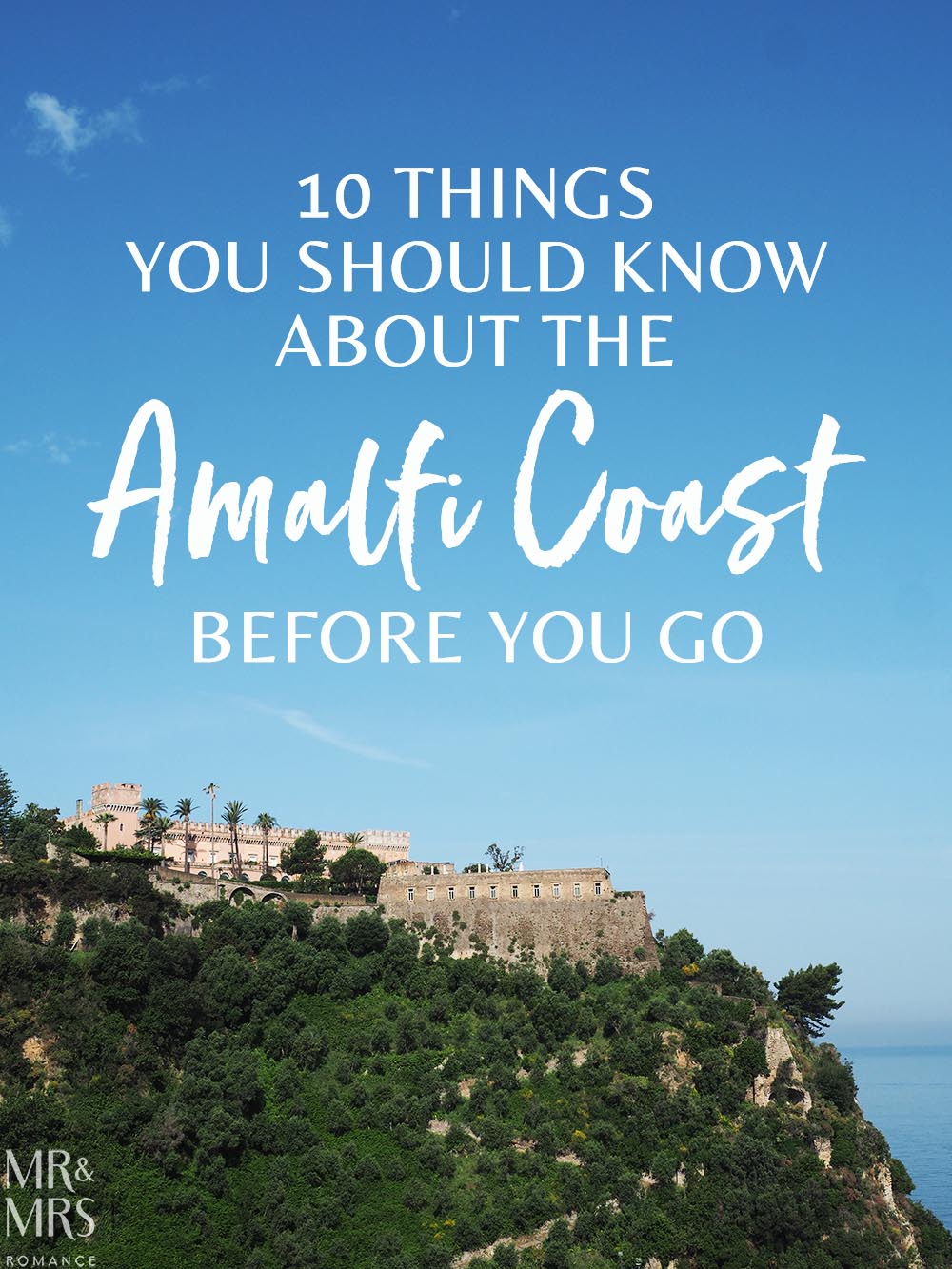 We were so excited as we landed at Naples International Airport. We couldn’t wait to see the lauded coastlines of Positano, Sorrento and Amalfi.

To walk the staccato streets of ancient towns down to the water. To ride the ribbon of road that spindles its way along the narrow brink of the coast like a single brave strand of spaghetto.

To look back across the beaming Bay of Naples at that sleeping giant of Mount Vesuvius looming over the city.

Click here to view our snapshot of the Amalfi Coast.

But it comes with some caveats.

Here are our tips to prepare yourself for your time on the Amalfi Coast. 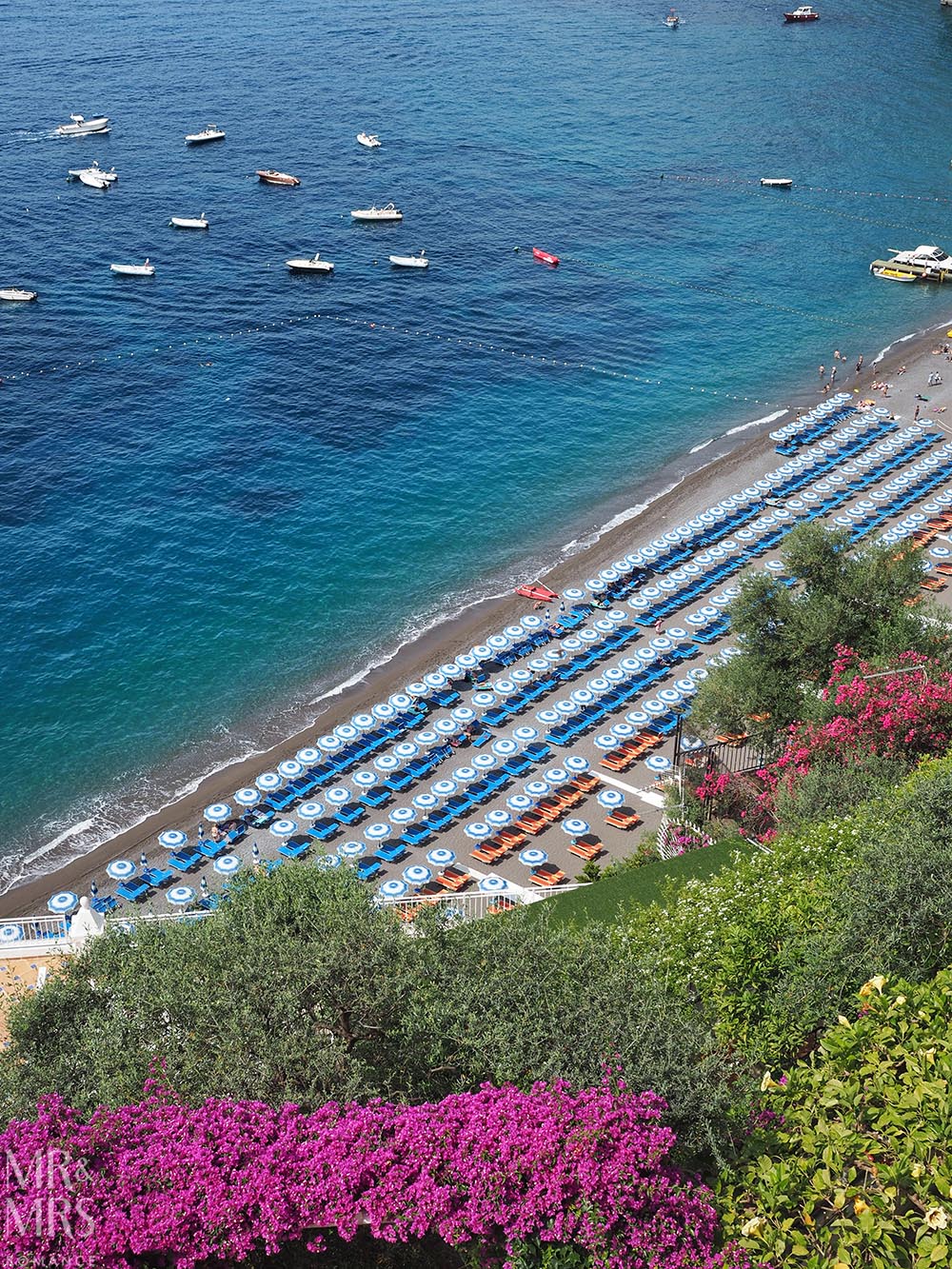 Whenever you go to places as popular as the Amalfi Coast, you know you’ll be paying more than the national average for things. The Dalmatian Coast vs the rest of Croatia, the French Riviera vs most of the rest of the South of France…

So go with an empty credit card and a full wallet, and expect these situations to have switched places by the end of your trip.

There are ways of avoiding the most expensive places and finding more affordable (and in some ways more ‘authentic’) experiences, but it’s more fun to go with the flow and worry about the budget later. 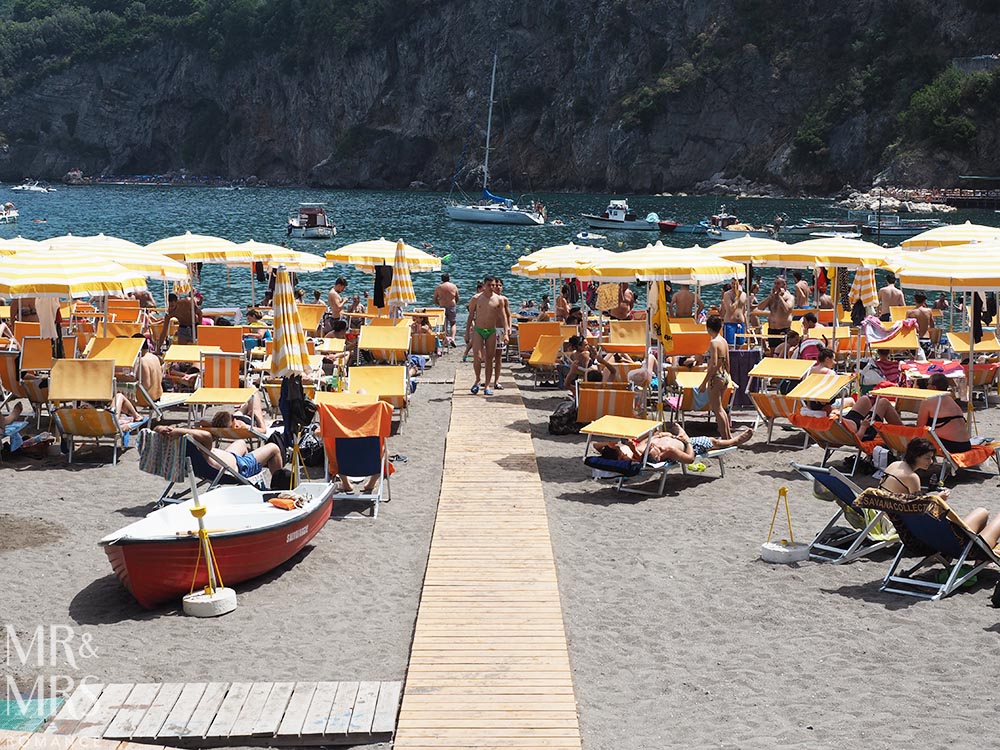 We were on the Amalfi Coast in early June and it was already busy. Not only are the towns along the coast – especially the famous ones – packed, but the roads are insane. There’s really only one road that takes you to the peninsula and it’s usually so jammed it’ll take you hours to get there from Naples.

During August, things are hectic, hot and reportedly very unpleasant. 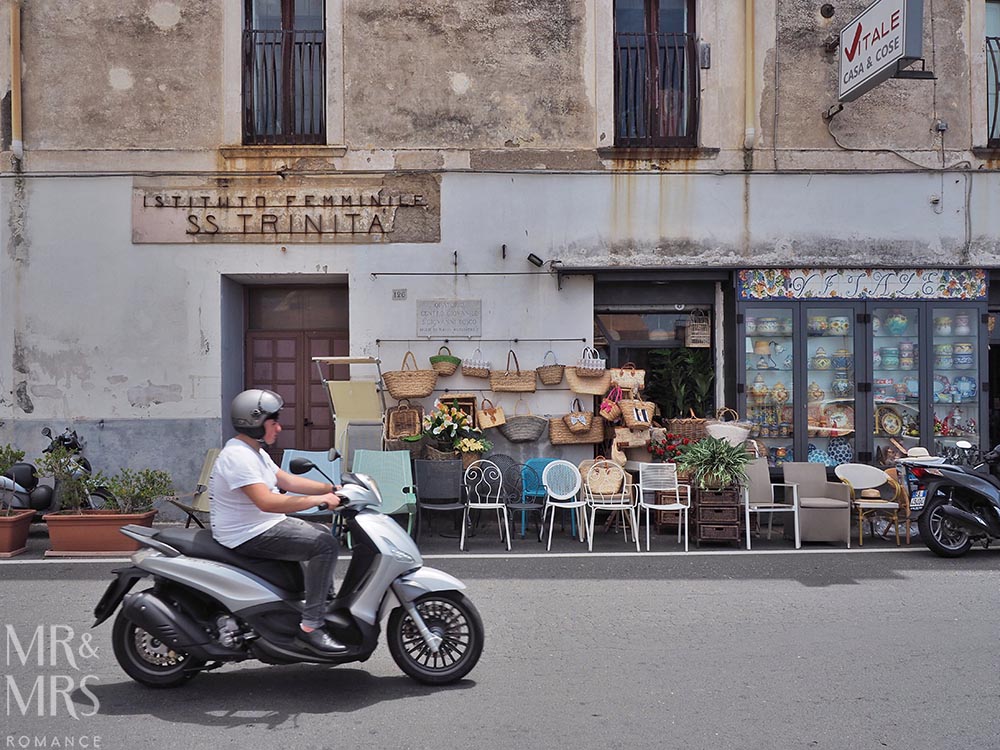 If you’re thinking it might be fun to get a car or moped and drive the Amalfi Coast, think again. Anecdotally, we’ve heard people parking their hire cars the first day they arrived and only getting in them again to drive back to the airport on the last day.

From what we’ve seen, the road (there’s only one that goes around the coast) is so narrow in many places there’s just enough space for a single vehicle to pass. And the road’s busy.

Things are made worse by the frequent public buses that hurtle up and down the road all day (see our next point) and they always take right of way! 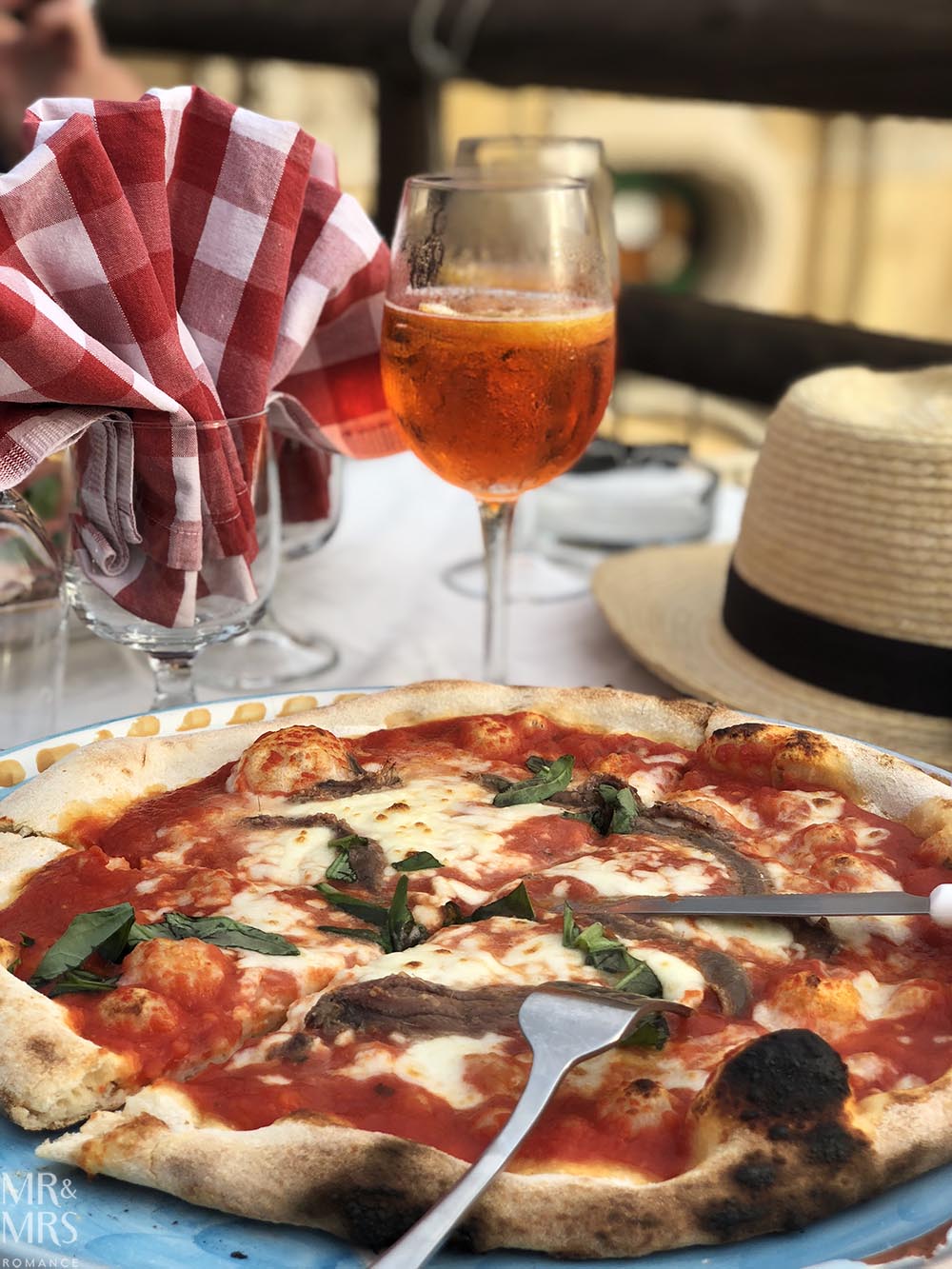 4. Buses are your best bet for travelling around – with a caveat

Apart from the first few towns as far as Sorrento, which are connected to the local rail network, the road that winds its way precariously around the cliffs is the only way to traverse the Amalfi Coast by land (see our next point).

Buses replace trains and take you to every town along the coast after Sorrento. They’re regular, cheap, clean and the views are outstanding.

However, they’re busy – to the point where you may be waiting a long time for one that’ll stop. Full buses just fly straight past. When you do get on, there’s a very high chance you’ll be standing. 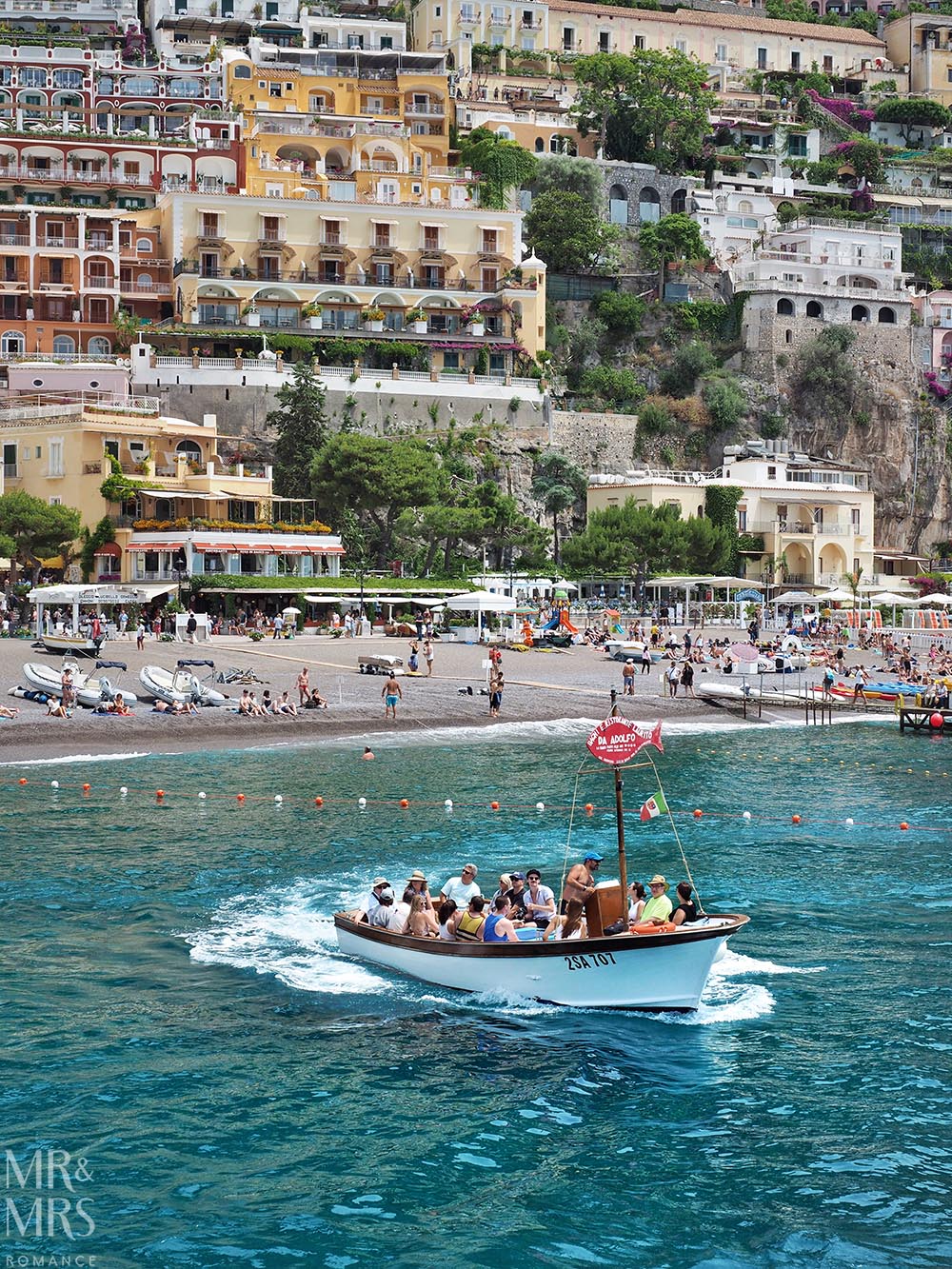 5. Always get a ferry somewhere

The best way to see the Amalfi Coast is from the water. When you’re in the towns looking out at the sea, it’s lovely, but it’s when you can see them tucked into the landscape, you get the idea of how truly beautiful they are.

Ferries leave from and arrive at all the major towns including Sorrento, Positano and Amalfi. You can even get to Naples from some towns. They’re fast, regular and comfortable, and the views are astounding.

Some restaurants even have their own boats to ferry you across for lunch too. 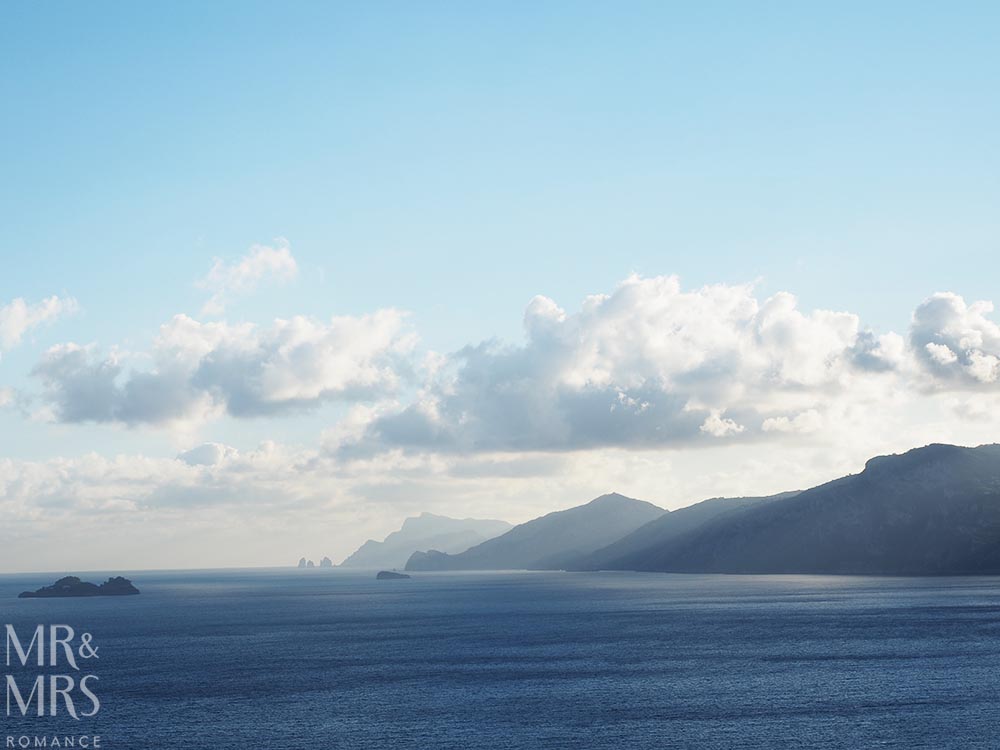 6. Path of the Gods is hard work

The other option that might appeal to some is the lofty Path of the Gods. This trek hoists you high into the mountains of the peninsula behind the coastal towns.

Starting near Positano in Arienzo and ending near Praiano, this 7km trail takes around 2 hours, but it’s hard work. Anecdotally, we’ve heard people really struggle with the hike, which is a lot of stairs and rugged terrain.

However, the views from up there are apparently worth it.  We also recommend walking in reverse from Praiano to Positano to take in the most of those vistas. 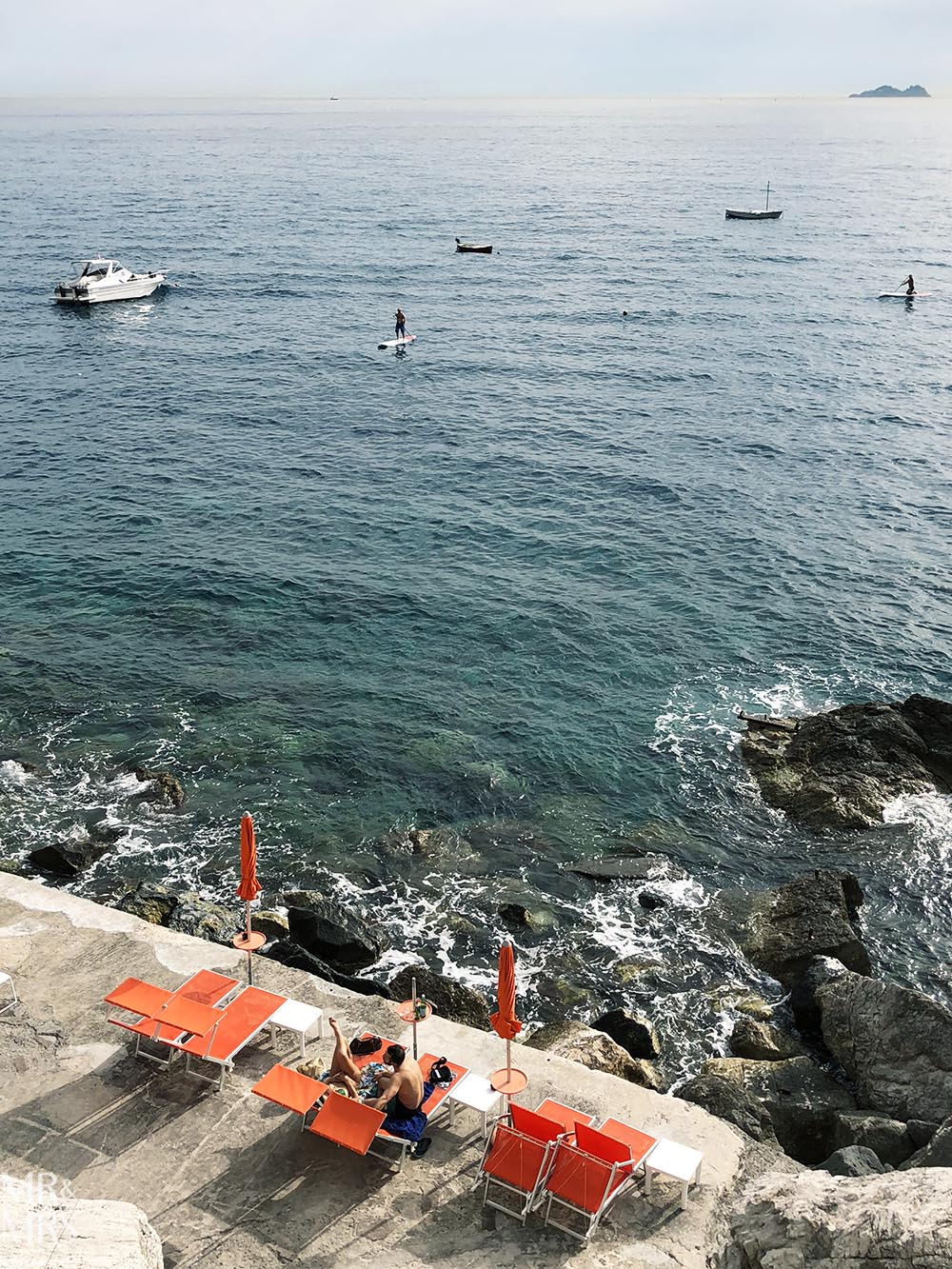 7. Beaches are often hard to get to

The beaches along the Amalfi Coast are a delight. The water’s warm and safe, and there’s almost always a bar nearby. There’s nothing quite like drifting on the Tyrrhenian Sea whilst looking up at the sheer cliffs above you.

Sheer cliffs you’re going to have to clamber up again to get home. Thankfully, like with the beach at Praiano, there’s a bar halfway up where you can take a breather.

Another thing to remember is beaches are often private in Italy, and if you want a beach lounger or an umbrella, you’ll have to pay. Some places are cheaper – local beaches like Vico Equense had beds, chairs and brollies for €5 each. Others like Praiano, we were quoted over €100 for four beds and 2 umbrellas.

If you have some Italian, don’t be afraid to haggle – especially if it’s not too busy. 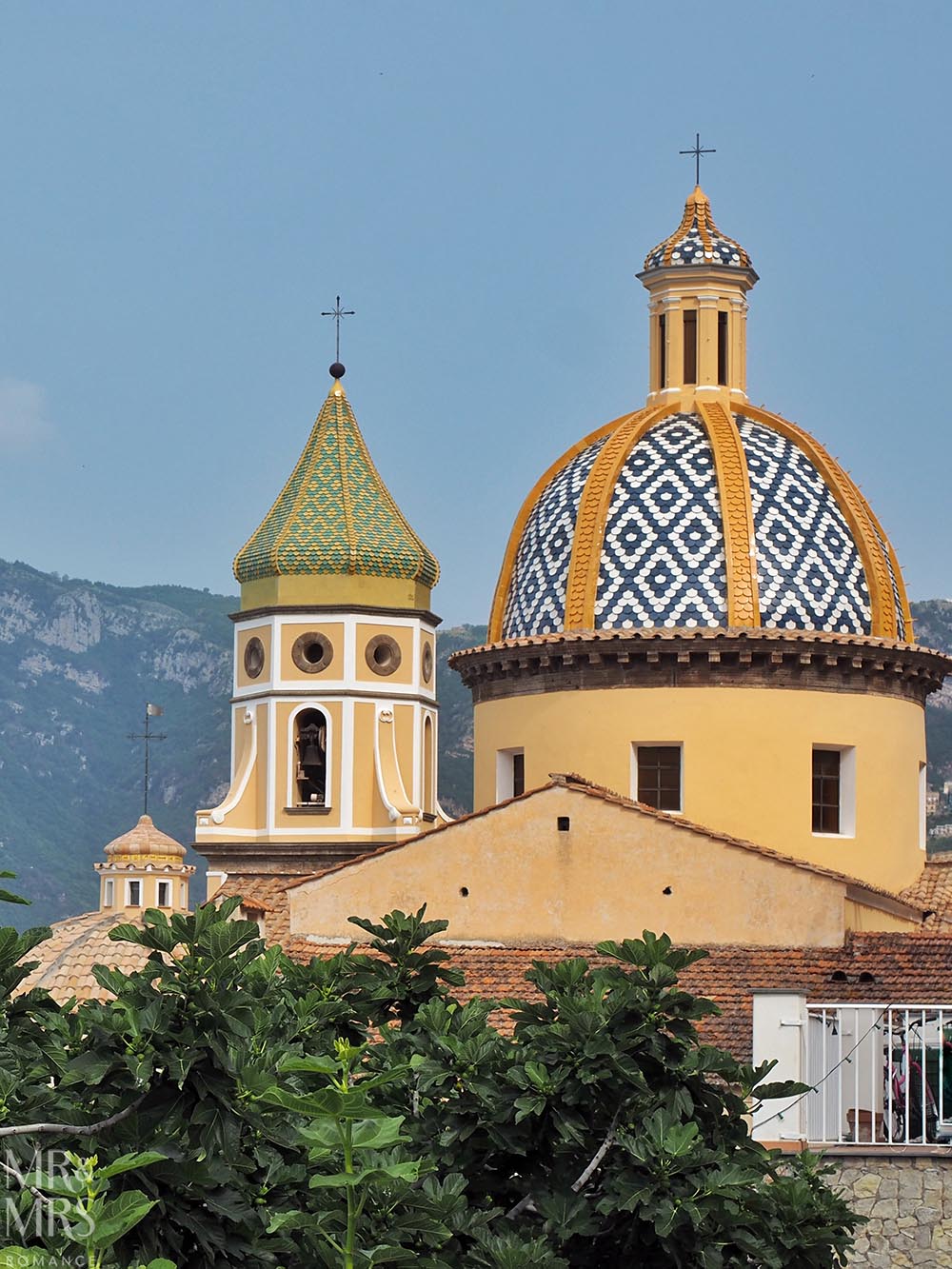 These towns are famous for a very good reason. They’re incredibly pretty. You’ll also pay a premium to stay there, which is fine in itself. But the towns’ popularity means the crowds during the day dent the value you’re getting.

If this doesn’t bother you, go for it. I have issues with crowds and prefer staying somewhere quieter, where I can find a little local bar for a beer and some space in the evening.

During the day, a couple of hours in the hotspots checking out the hawkers and the hustlers is plenty for me.

Joining the parade of visitors trooping down the cobbled laneways under the russet rooftops of the most charming seaside villages – I can only do that for a couple of hours.

Here’s our story on where to stay on the Amalfi Coast and where to find the ‘real’ Amalfi. 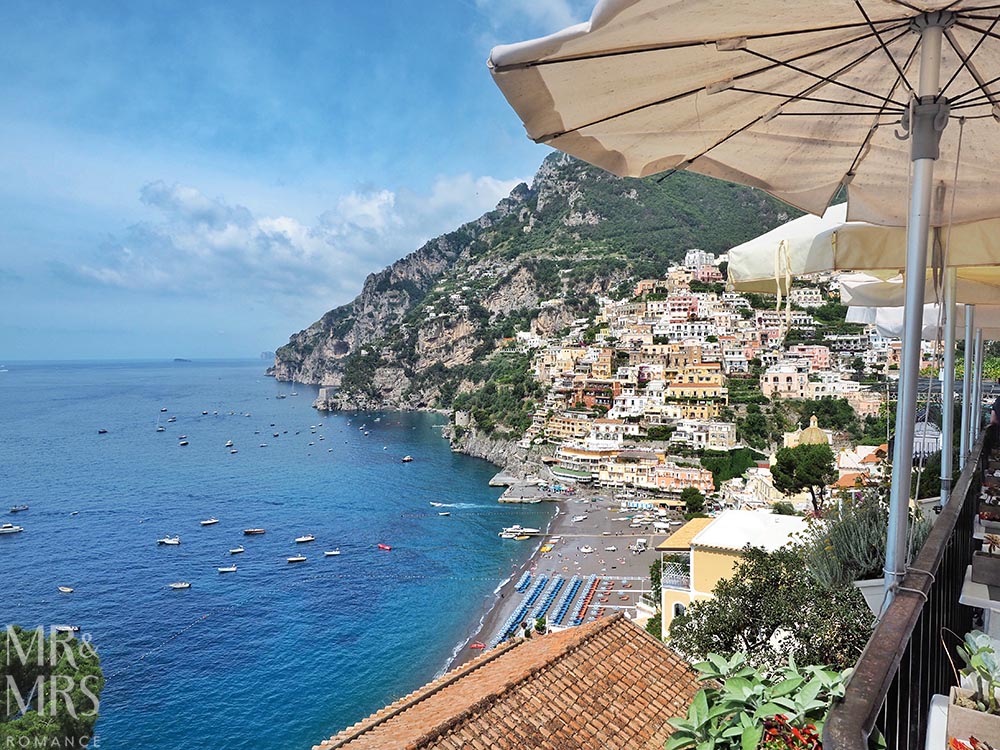 9. Timing is everything – there are bad times to be on the Amalfi Coast

As we mentioned before, August is not the time to be on the Amalfi Coast. It’s very hot, it’s incredibly busy and prices do tend to go up. Speaking to locals when we were there, we found even they aren’t particularly happy at the apex of peak season.

Alternatively, winter on the Amalfi Coast is very cool – between 3-13dC. As it’s low season, you’ll find it very quiet and you’ll have the run of the peninsula. However, many places will be closed for the season. 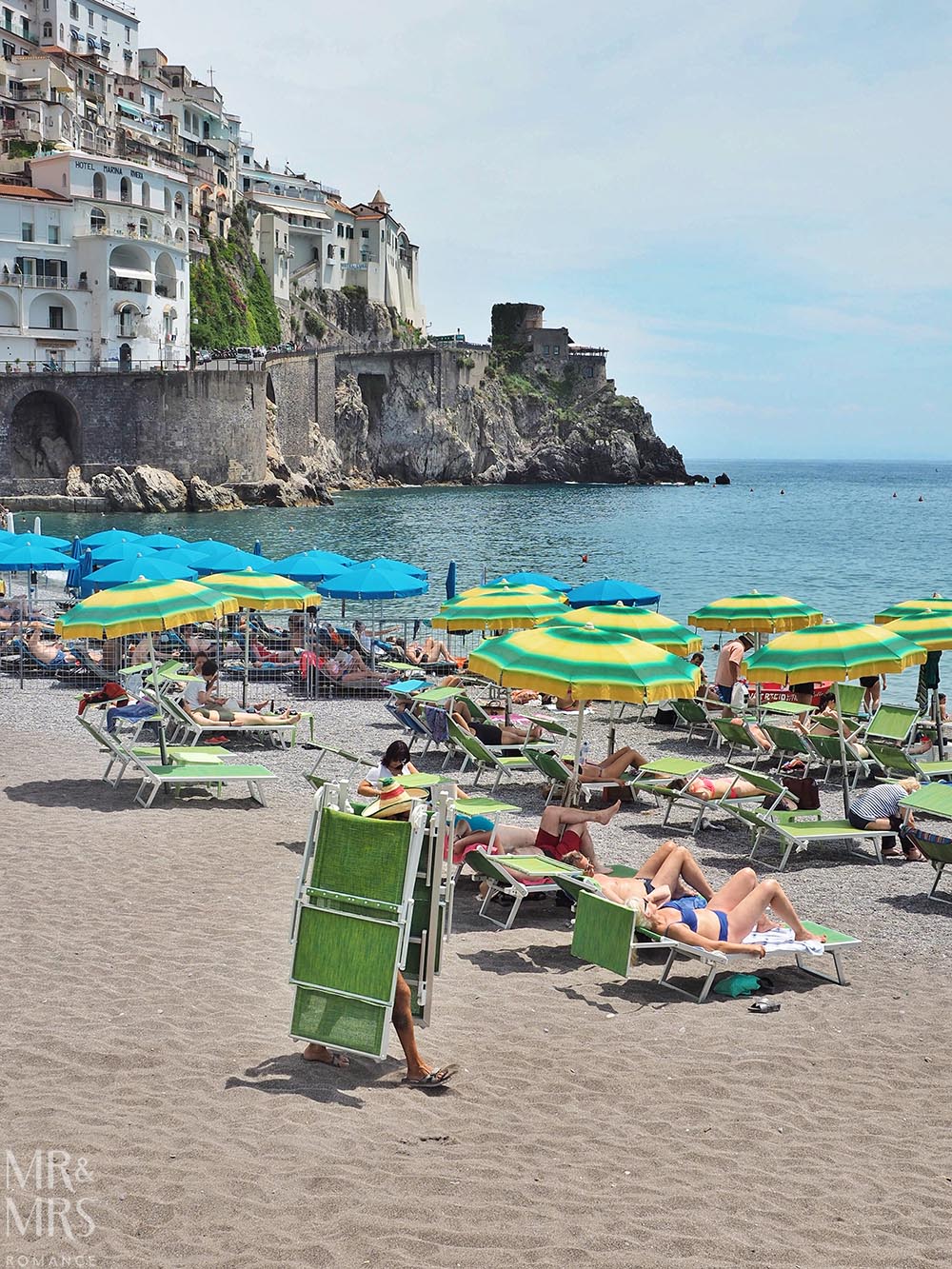 Most people only use Naples as a landing site/launch pad to get to the Amalfi Coast, which is understandable, but a tremendous shame.

There’s a lot of misinformation about this amazing city. It’s not dangerous and has some incredible things to see. Here’s more on why you shouldn’t be afraid of Naples or discount it as a travel destination.

It’s also easy to get from Naples to Pompeii, though there are ways to get to Pompeii from the Amalfi Coast without a car too. Pompeii is a must if you’re as nearby as the Amalfi Coast. Here’s more on Pompeii and what you can do there. 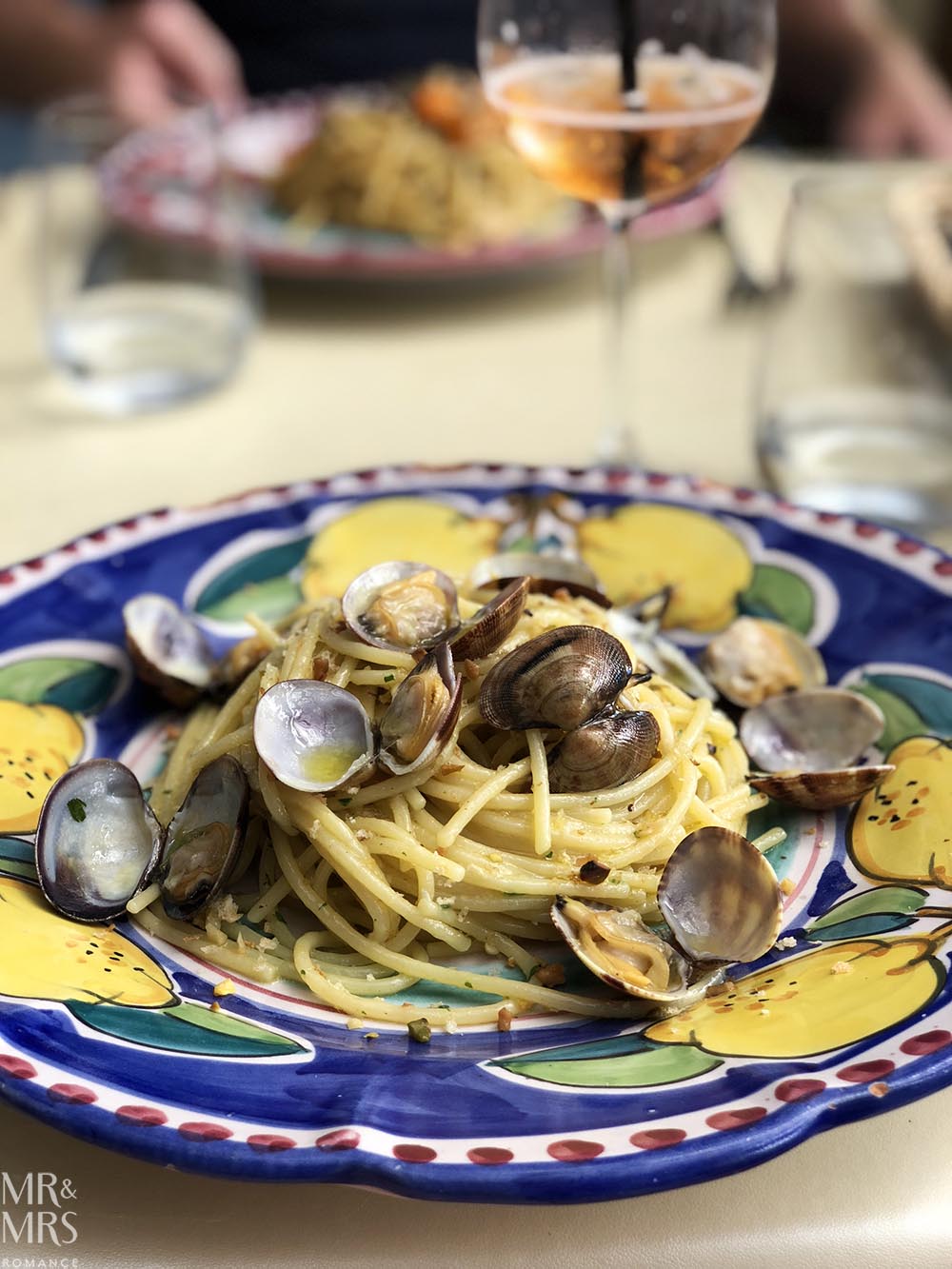 Go to Ravello! No one seems to go there, so it’s quieter but everyone who we’ve talked to since we’ve been back have asked us if we went there. A day trip in the hills is worth the effort.

Save time to check out the islands – obviously Capri, but up-and-coming ones like Ischia and Procida have so much going for them, and they aren’t as busy as the peninsula. 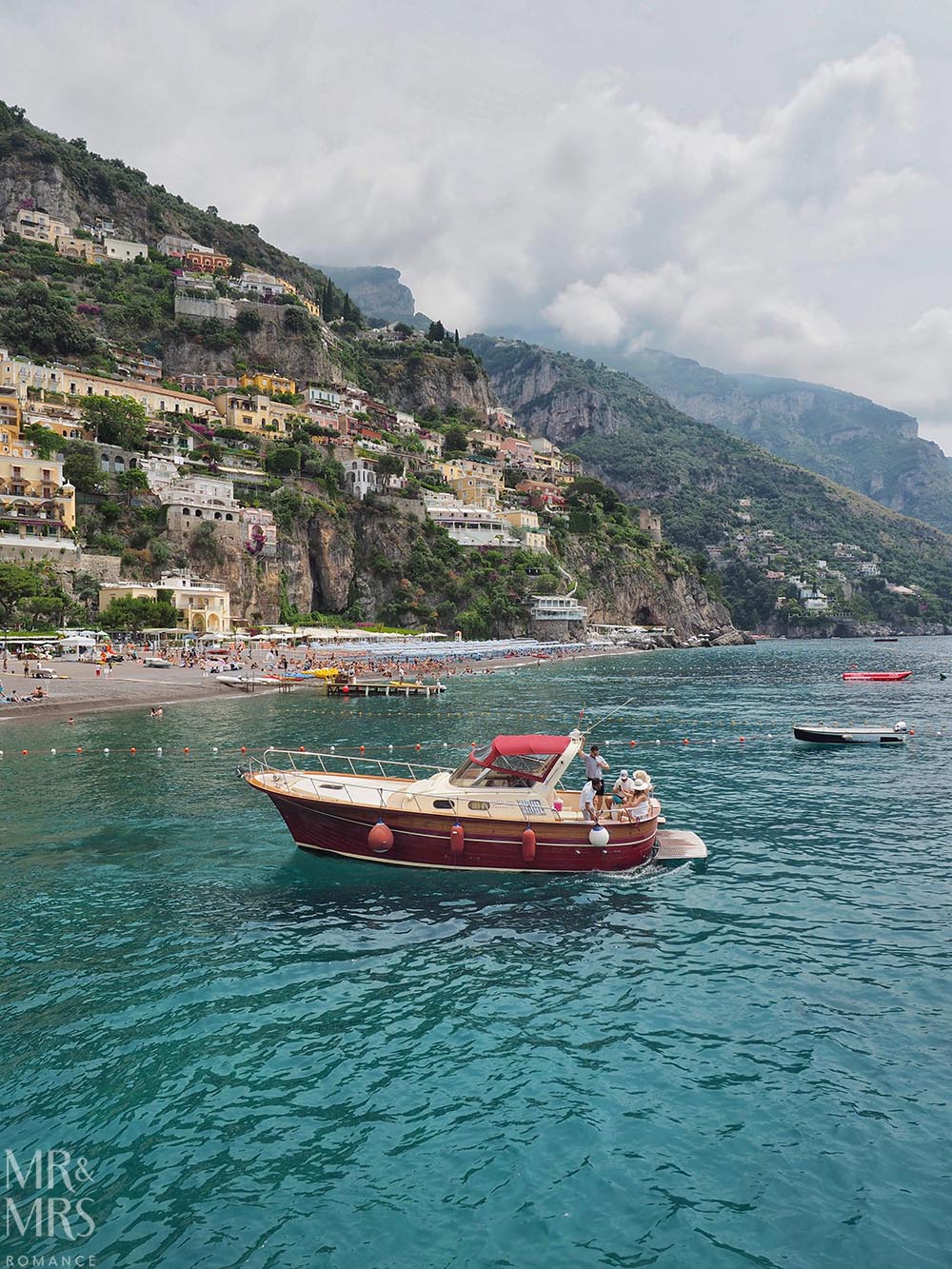 I really don’t mean for this post to put you off visiting the Amalfi Coast. It’s still one of the most stunningly beautiful places we’ve been to.

We’re not down on the Amalfi by any means and our time there was wonderful. But realistically these points we’ve made are something to be aware of.

Visiting popular destinations is always a balancing act. On the one hand, you want to see for yourself what the fuss is about. And there’s a simple reason tourist attractions are popular: they’re often magnificent.

On the other hand, over-tourism of a destination, regardless of how beautiful it is, can spoil things. Of course, there are ways – even in places as busy as the Amalfi Coast – to the find peace, beauty and romance of this coastline.

It’s there. It’s just up to you to dig deeper and discover it. 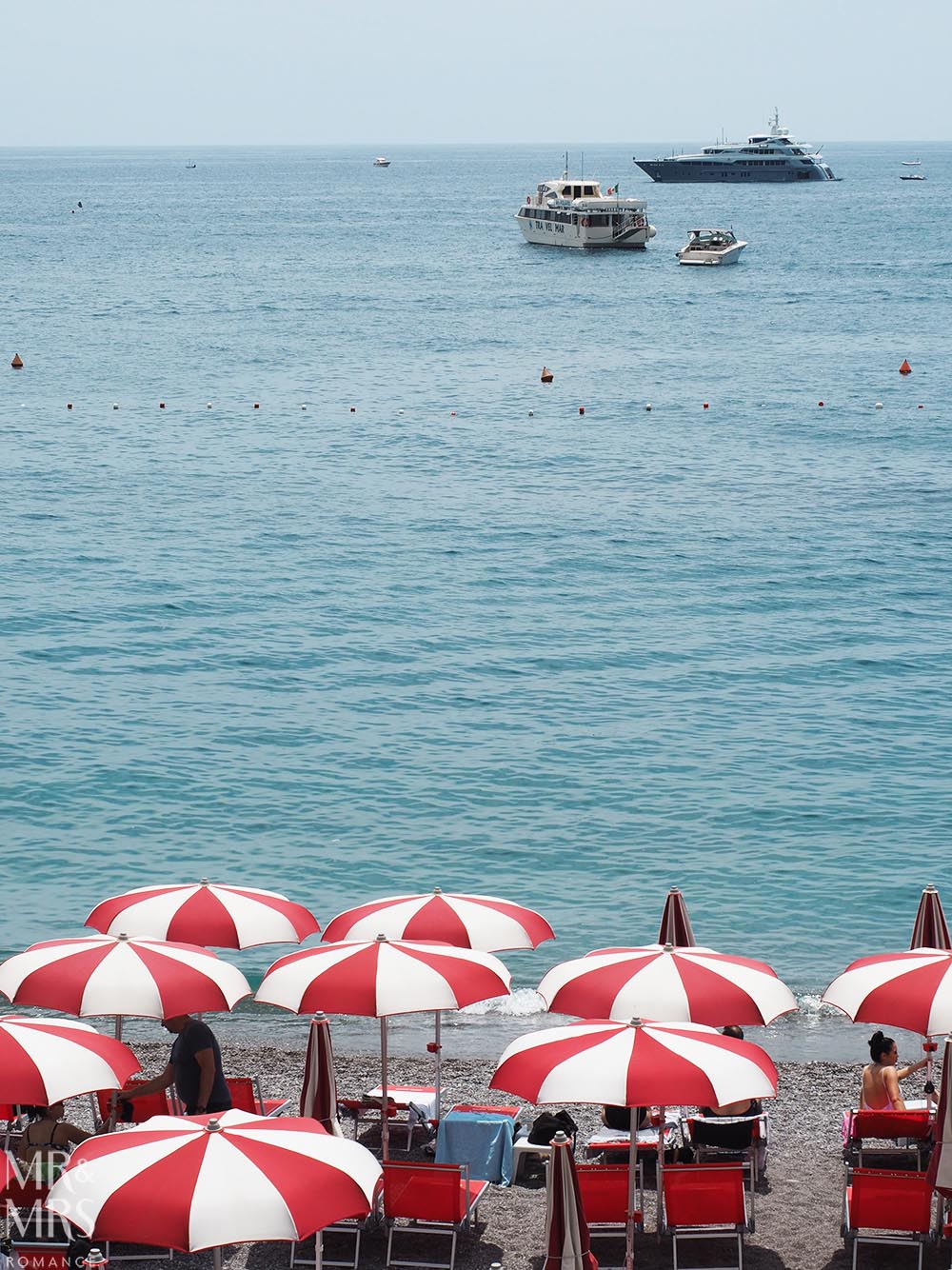