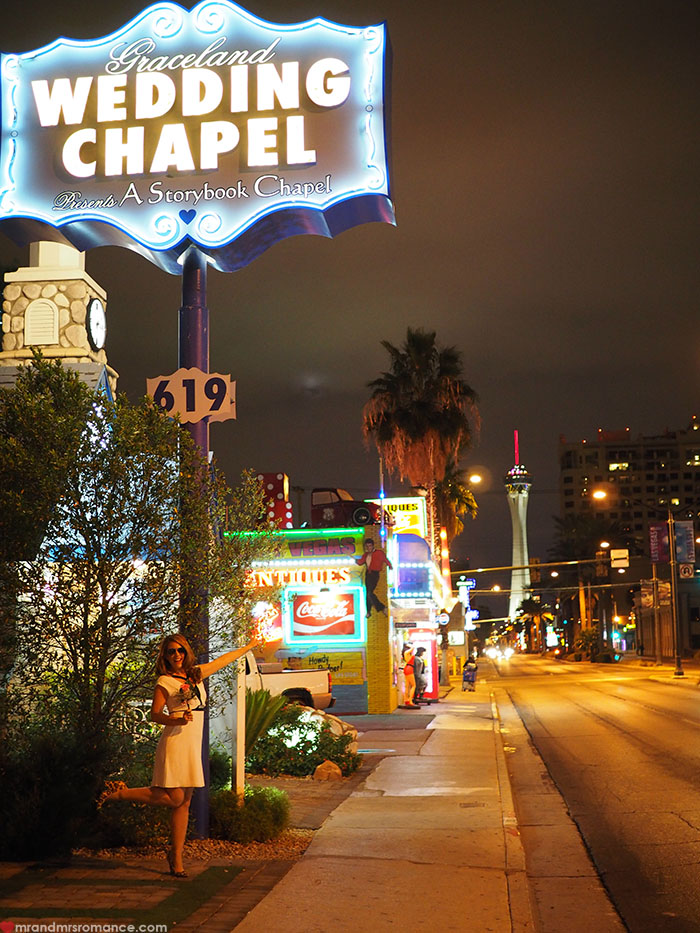 It has to be the greatest song about Las Vegas ever, hasn’t it? What a classic.

And it was this song that was pumping through our veins as we walked up the Graceland Wedding Chapel on Las Vegas Boulevard in the middle of the night.

We’d already been married just short of 5 years, but we were excited about the prospect of renewing our vows… and of meeting Elvis of course!

The Graceland Wedding Chapel is an unassuming place in Vegas terms. Its exterior is twee with whitewash walls, a little bridge and a pergola for photos. There’s a little courtyard where you can have photos too.

But it’s inside where the magic happens.

In spite of the reception feeling more like a doctor’s surgery than a chapel, the staff were attentive yet relaxed. Everyone was there for a fun time and that’s what this is all about. 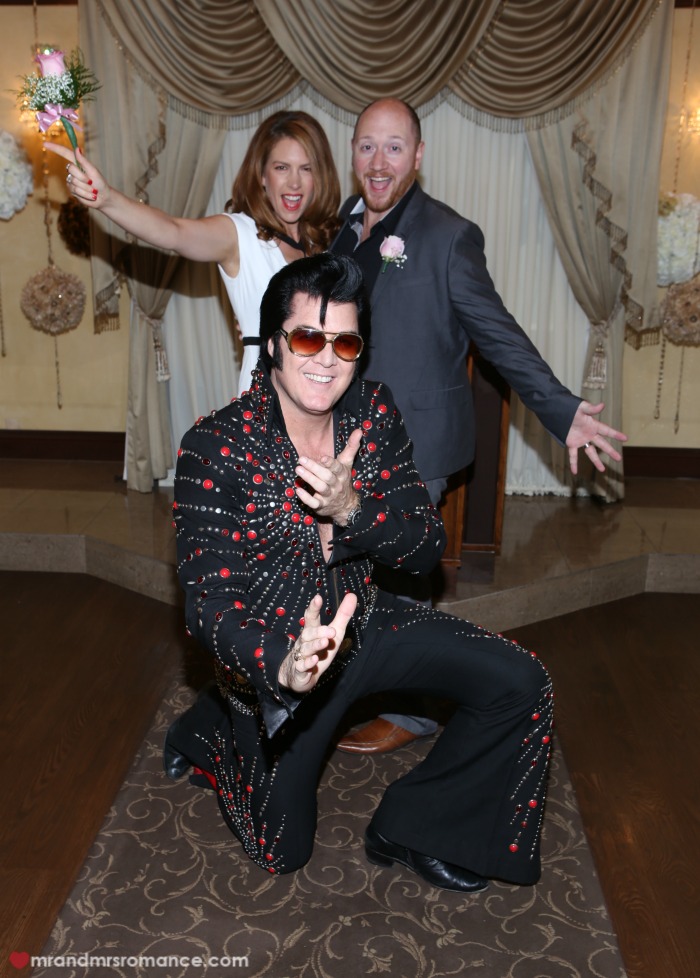 While we were waiting for Elvis – of course you wait for Elvis – one of the guys at reception even took us outside for a couple of photos.

Back inside the chapel we were greeted by the man himself. Elvis was looking trim and tall in his superb rhinestoned black onesy. And the man can sing!

He walked Mrs Romance down the aisle to me crooning out Can’t Help Falling In Love as he went.

The ceremony was a great mix of hilarious, romantic, surreal and sentimental, and was worth every minute and every penny spent. If you ever visit Vegas, make sure you do this.

I must admit I wasn’t totally sold on the idea – even up to the point that I pinned the rose through my buttonhole, but it’s actually awesome. 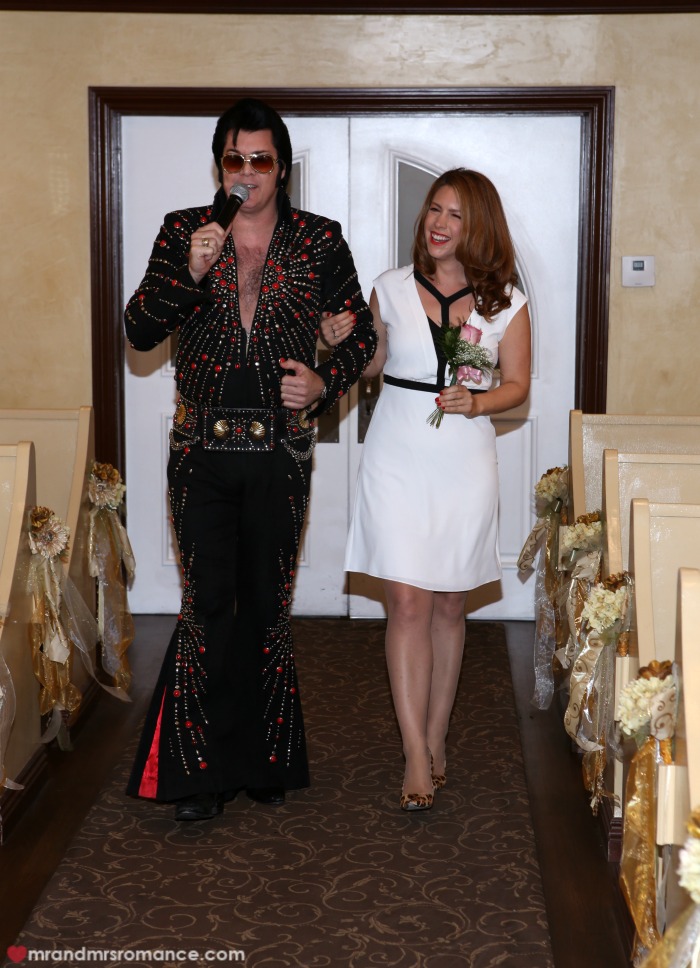 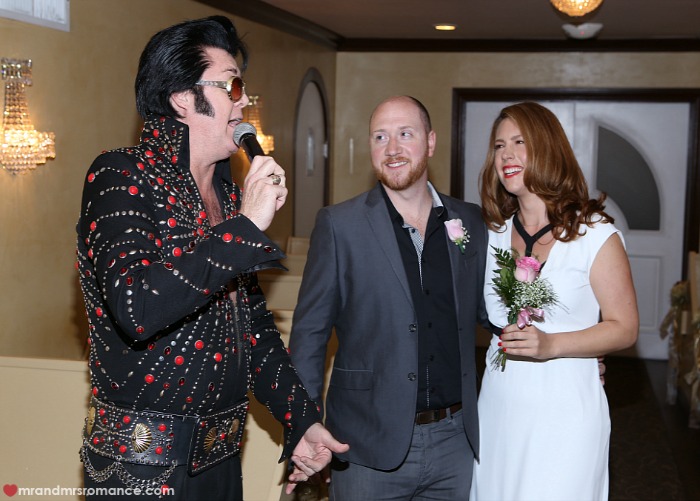 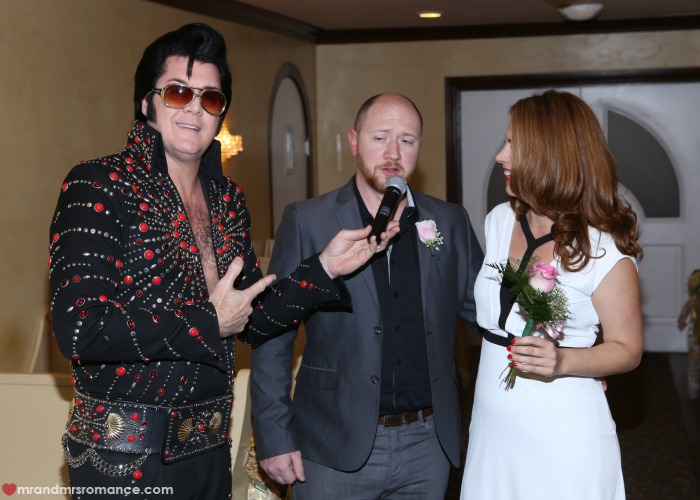 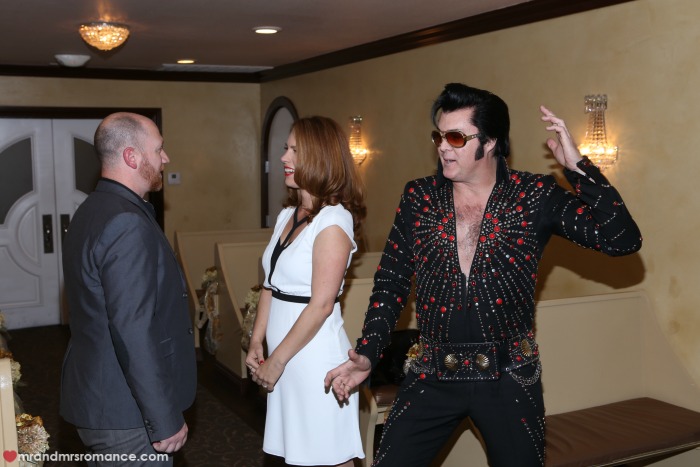 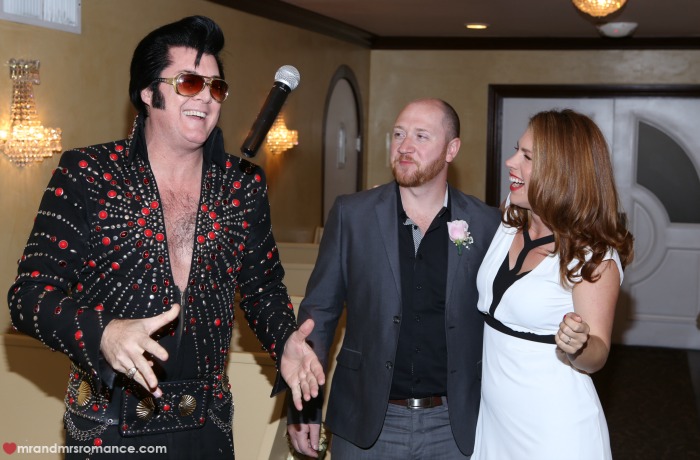 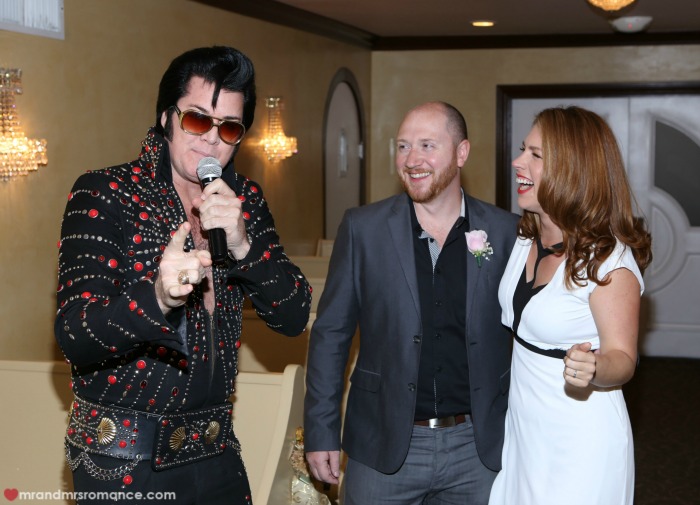 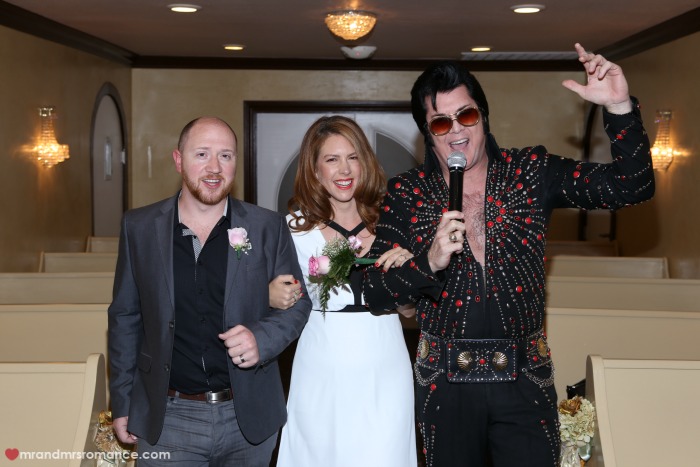 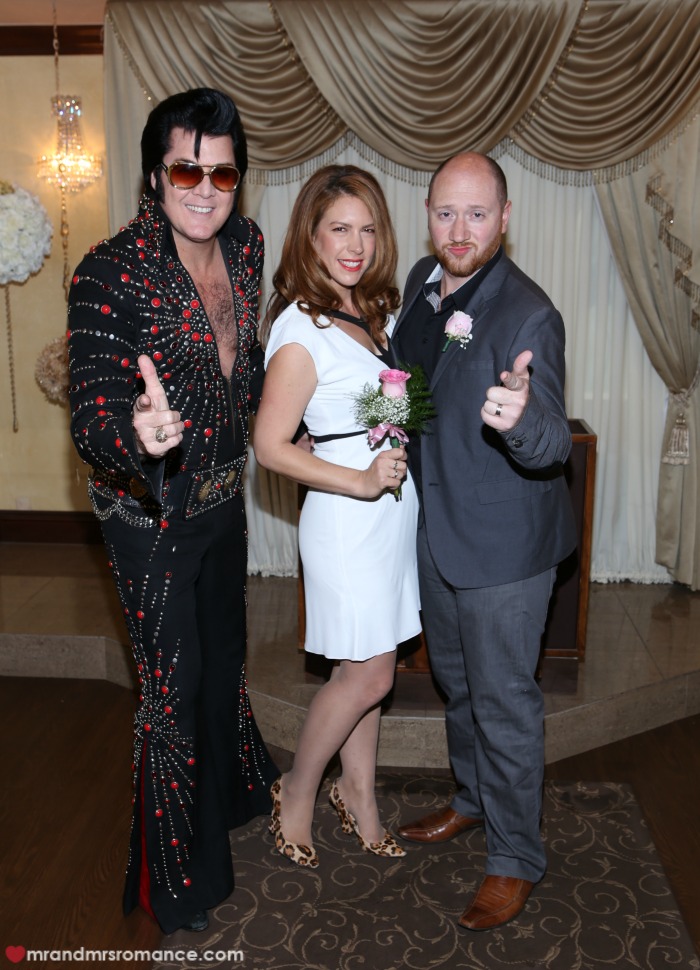 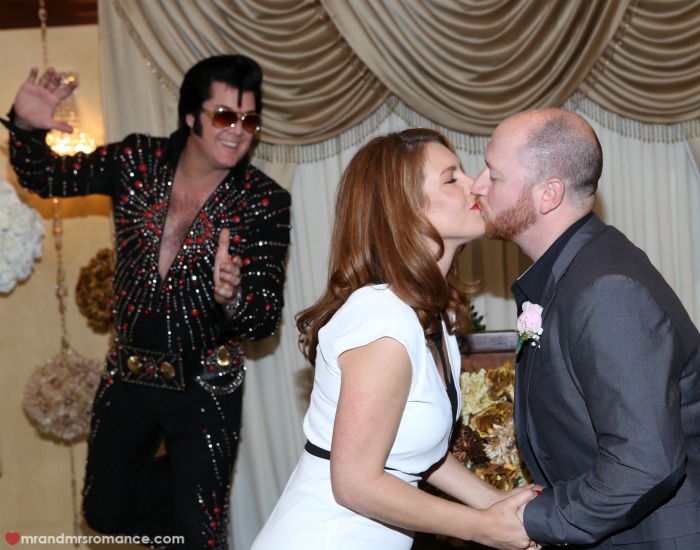 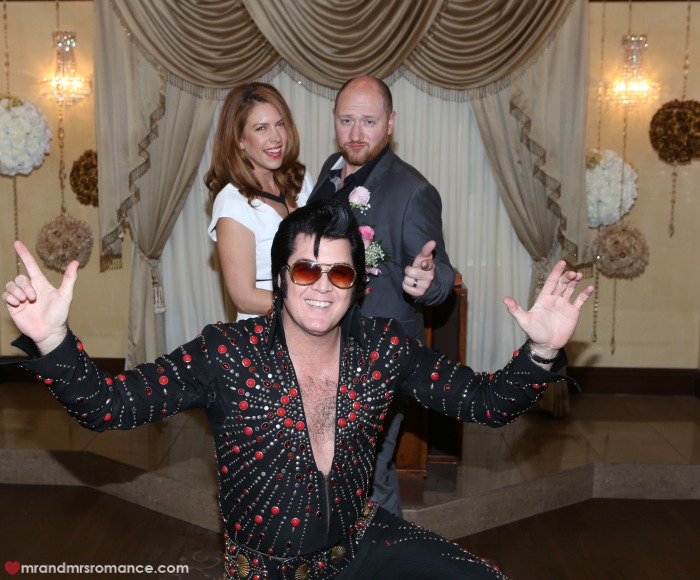 A few things to know

– After some careful research Mrs Romance found this one to be one of the best value Elvis chapels in town. There are lots of options you can add on to your service.

You can do the drive-through wedding where you hire a Cadillac. You can even have 2 Elvises have an ‘Elvis off’ on your wedding.

We stuck to just the one.

– You’ll need to pay Elvis – as the celebrant – in cash after the ceremony. It acts as a kind of tip but it’s more like his fee. You also pay the photographer his tip here. Just put all the money in the envelope the photographer gives you at the end.

– The Graceland Wedding Chapel has been going for over 50 years now – an incredible feat in Vegas terms.

– The chapel is not on the main Vegas Strip any more. The Strip was moved some time ago, so this is in the old Vegas part of town.

– Because of its location – the chapel’s a couple of doors down from where the show Pawn Stars is filmed – it’s a little dodgy at night. We felt safe enough but if you’re there with three or four mates, that’s even better.

– We hung around outside a bit longer taking some more photos just for a bit of fun. They’re fine with this providing it’s not too busy and you’re not in the way. 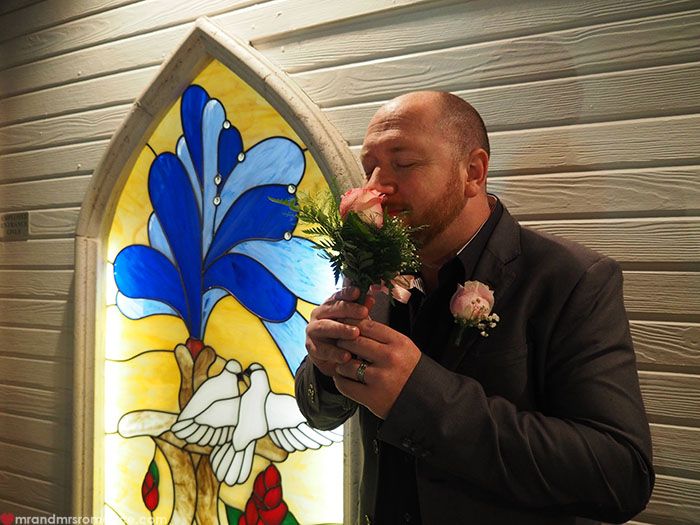 – We walked on to old Vegas, which probably isn’t advisable (it is a bit dodgy though we did feel safe enough). If you ask reception, I’m sure they’ll call a cab for you.

– Enjoy your time here. It’s brilliant and made for people who don’t want to take things quite as seriously as those who want a big white wedding. 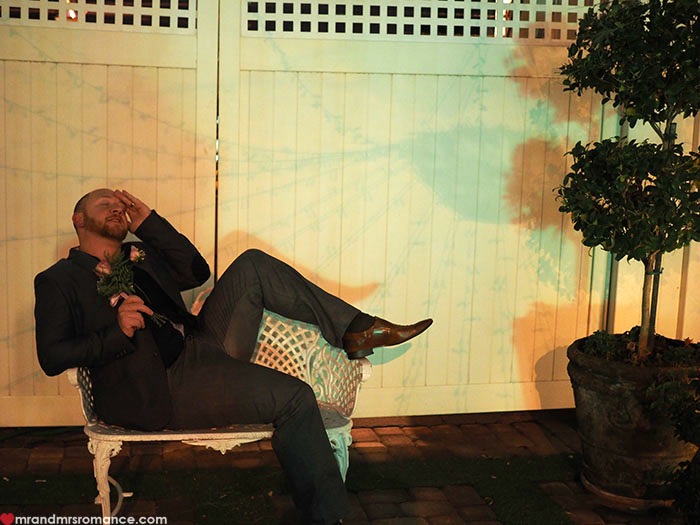 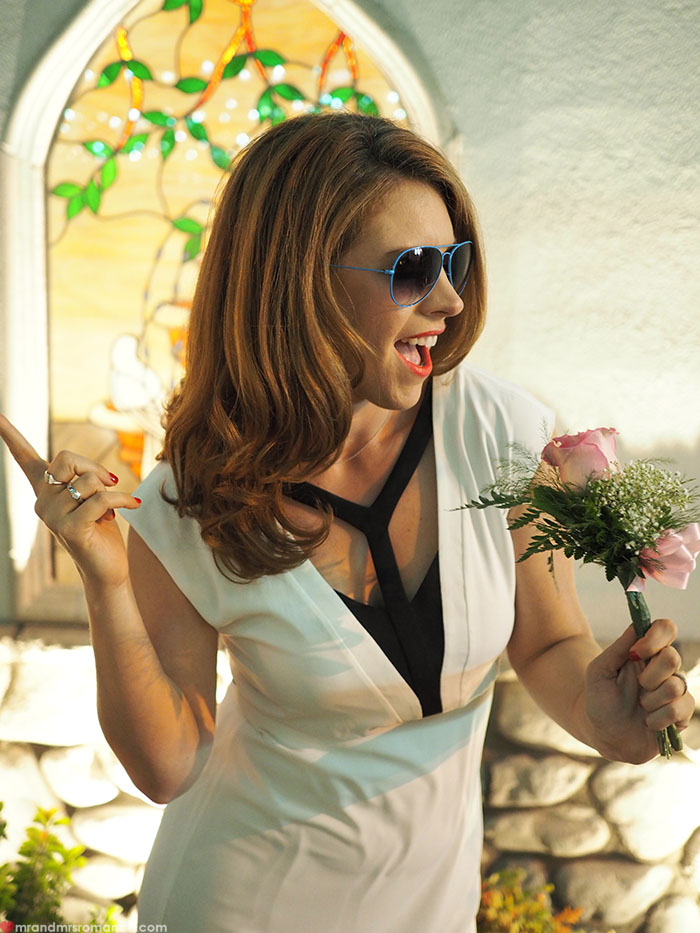 Have you renewed your wedding vows or thought about it? Would you ever elope and have an Elvis wedding? Tell us in the comments!

Images by us using O-MD EM1 Olympus camera or purchased from the Graceland Wedding Chapel.

A new brain at Grain, Handpicked get arty and dinner with pals

At long last, it looks like spring’s coming to Sydney. Temperatures are going up as is the humidity. Ordinarily, I hate humid weather, but…