Until recently, Sydney’s Central Business District would die after dark. There were a couple of bars open, the odd McDonald’s and that was it. Now there are hosts of places to eat, drink and be very merry indeed. And Bowery Lane in O’Connell Street has got it just right. 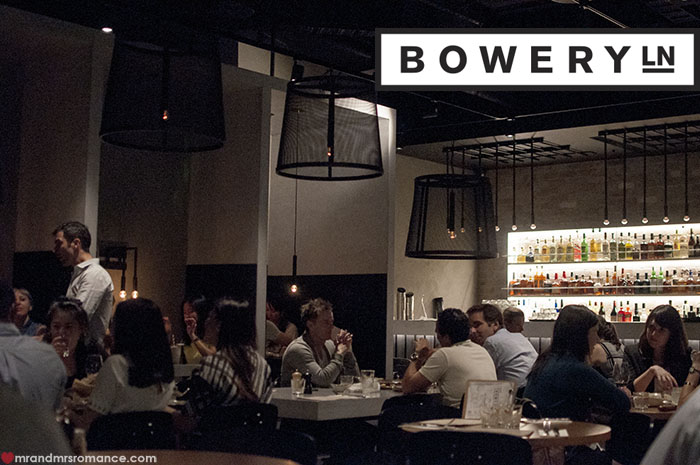 Bowery Lane started out just as a week-day cafe, serving up cakes, coffee, salads and sarnies to city suits. But now their dinner menu is attracting more casual diners, parties and tourists.

The street level is still all cafe space and takeaway coffees in the day. But up the stairs, the space opens into a loft-style eatery.

You have the choice between regular table seating or booths, and pretty much anywhere you sit in the restaurant, you can see into the open kitchen.

We really like an open kitchen. It makes you feel like you’re part of the restaurant. The energy and intrigue that spills out from a commercial kitchen is fascinating.

Also, you can see your food coming from as far away as possible. 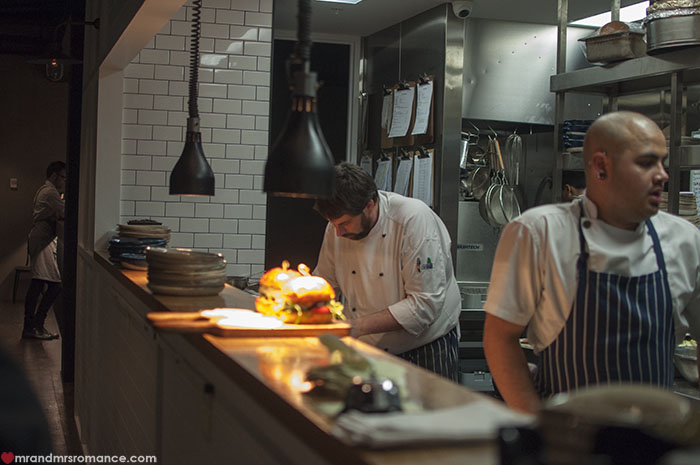 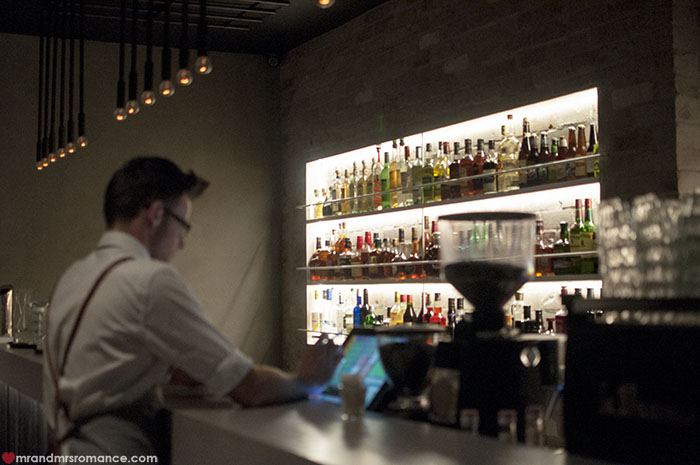 While we waited for dinner to come, Mrs Romance and I decided to try out the cocktails. The whole menu’s got an olde worlde New York feel. It’s reflected in the loft style decor, the seating and certainly its drinks. Mrs R ordered the Southside Gangster – a gin cocktail shaken with elderflower liqueur, mint leaves and lime.

I’m a massive sucker for a whiskey sour, and this one – the New York Sour – uses a rye. It wasn’t bad, but I think Mrs R had ordered better. 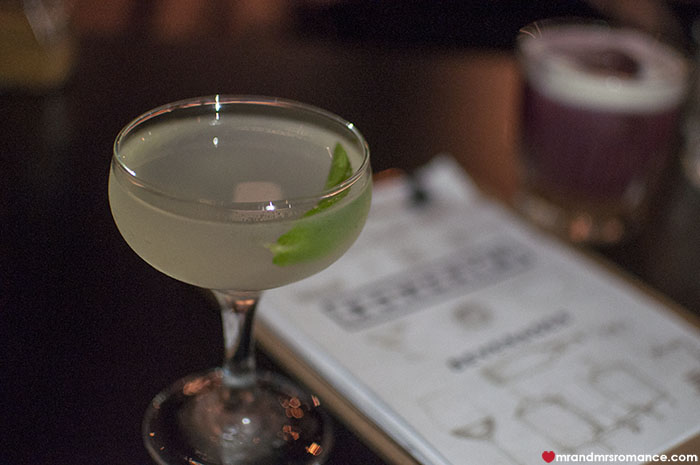 For food, we wanted to try the braised wagyu short ribs, but they only come in a 1kg pile – and we wanted to try some other things. The Bowery staff were really friendly and helpful, but on this they won’t budge; it’s either a kilo of ribs or none at all!

Our remedy: we ordered the char-grilled lamb ribs for entree. They were extremely tasty, and we can see now why the short ribs had been so highly recommended.

We also went for house-smoked hickory salmon with puffed rice and a tasty salad. This was a really smart dish, and worked perfectly against the richness of the ribs. 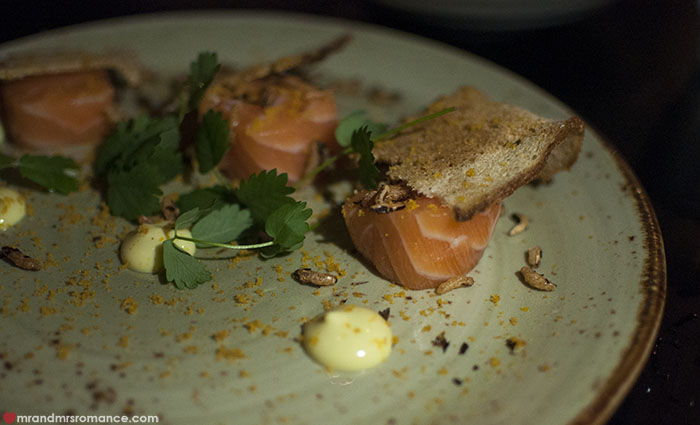 After sharing our entrees, Mrs Romance and I went our own separate culinary ways – after all, I don’t share food that well.

Mrs Romance Went for the sherry marinated globe artichokes with ancient grains, heirloom carrots and goat’s curd. It was an impressive dish – very much embracing the heritage mindset of Bowery Lane. It was also very tasty.

I – on the other hand – did the only proper thing. I went for the New York Cheeseburger. Arriving on a slab of wood, my burger looked crammed full of stuff – and by the end of it, I understood how that burger felt!

The melting cheese dribbled down the sides of the burger patty, the soft seeded American style bun soaked up all the juices and sauces, and the sticky caramelised onions worked in there perfectly too. The shoestring fries were crisp and salty, and not easily refused – as Mrs R discovered when she tried the first one… and then the second… and the third and so on. 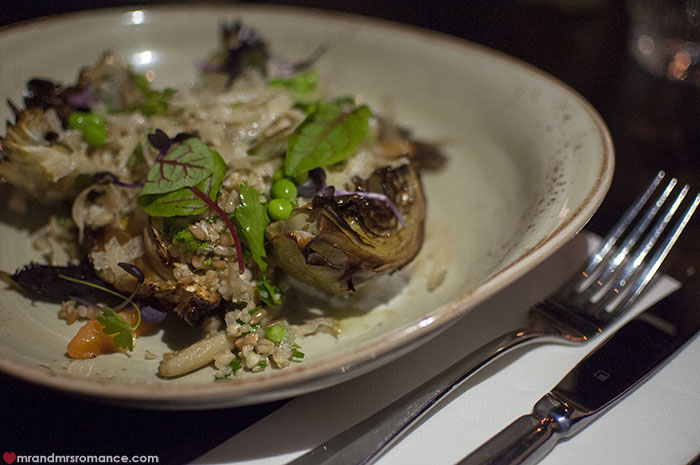 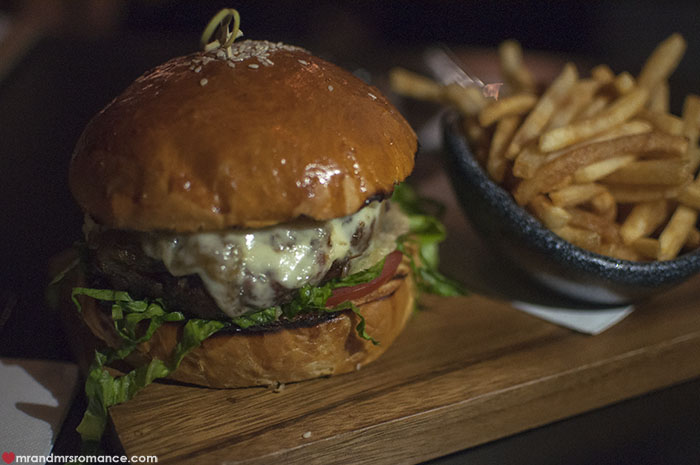 Our waiter was adamant we try the desserts, and even though we were hurting by this stage, we felt duty-bound to do so. It was definitely the waiter’s fault. And I’ve decided that if I’m eating under duress, those calories don’t count. A bit like food consumed in the midst of a hangover or jet lag.

Anyway, the deconstructed ice-cream sandwich was good – the melted choc sauce was delicious, as were the candied pecans. The pear halves hadn’t been poached quite long enough though, and were quite hard to cut. A well-designed dessert though.

The jar of cookies and cream was just full on! Really creamy with chunks of honeycomb and berries – but it was so rich, I could only manage a few trembling spoonfuls. 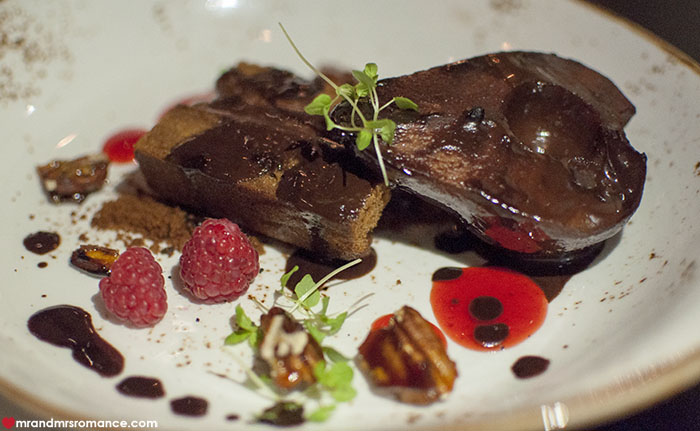 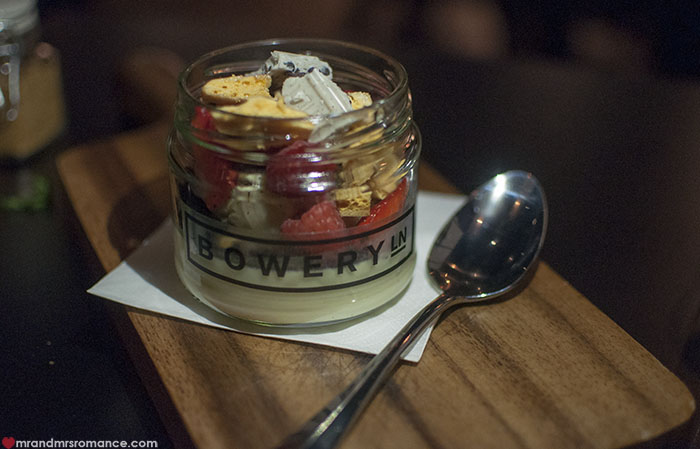 Bowery Lane’s a great little spot for all kinds of purposes. A city-side date night, a catch-up meal with friends, a dinner party for a birthday (though booking would be advisable) – even an in-laws meal would work here.

Do you like to go for dinner in the city? Where’s your favourite CDB supper? What would you go for – an artichoke salad or an NYC burger? Tell us in the comments!