Very early on in our relationship – I’m talking within the first week or so – Mrs Romance and I were struck by lightning. I don’t mean in the love-struck sense or in some poetic romantic rhetoric. I mean we were actually hit by a bolt of lightning. This is our story. 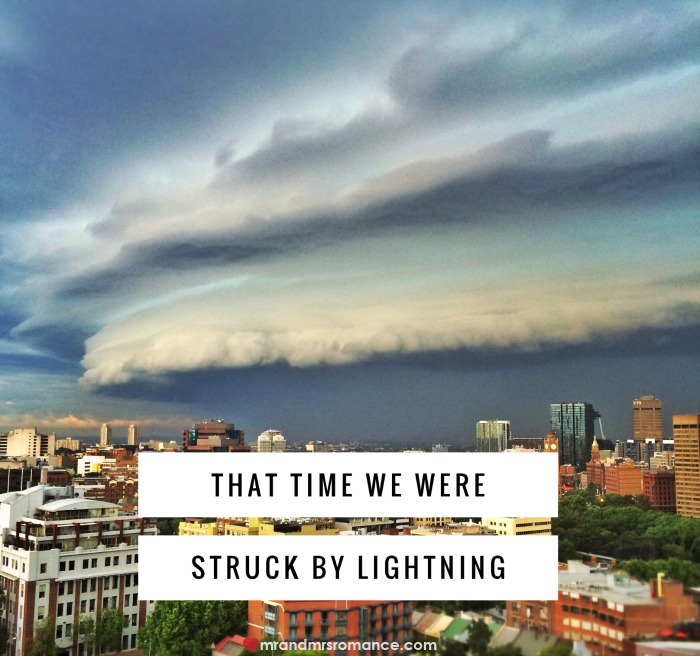 It’s always interesting to find out what makes two people stay together – what makes a relationship tick. In the same what we love hearing stories about how couples first met (here’s our story), discovering why they’re still together can be one of the most intriguing elements to a relationship.

For us it’s all about shared experiences. Happy, sad, exciting, unexpected (even the humdrum) stuff that happens brings form to a partnership.

And some of the things that happen to you both have long-term bonding consequences – just like the time we were struck by lightning. 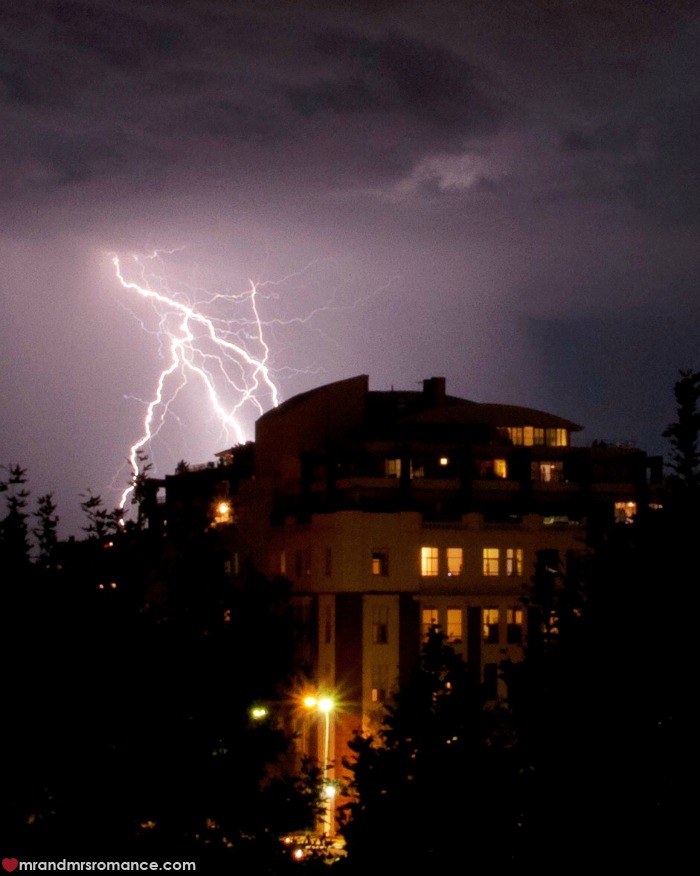 That time we were struck by lightning

At the time, I was living in the beautiful suburb of Paddington in Sydney’s east, in a not so lovely share-house with a bunch of backpackers. Mrs Romance on the other hand was living one suburb over in Centennial Park. She was living with her friend in an amazing old house that was later pulled down and a block of 5 apartments now stands there.

Her house was great. It had a little yard and a car space round the back, and was right next door to the then Sydney Football Stadium and the SCG.

As this was at the time of the Sydney Olympics – yes, we’ve been together that long – the two stadiums were being used all the time. It was such a great time to be living in Sydney. 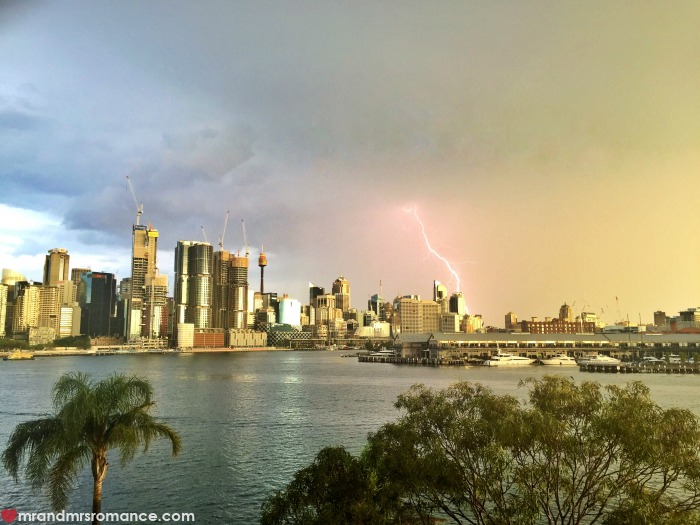 One night I was round Mrs Romance’s place for dinner. I remember the clouds around the city were the strangest colour – made even stranger by the lights from the stadium across the road.

Just after we’d eaten, the rain started and there was a deep roll of thunder.

It turned out both of us have a love of storms. Watching them and feeling the forces of nature fall from the sky.

We stepped out into the backyard to take a better look at the night sky. Playing the gentleman, I grabbed an umbrella and held it over us. Neither thought that was a bad idea at the time as the big, heavy droplets of rain tattled down overhead.

The sky was all kinds of colours: greens, purples, blues… it was beautiful. More thunder boomed overhead and we held each other closer.

I was holding the umbrella with my right hand with my left arm around Mrs Romance’s shoulders when it happened. 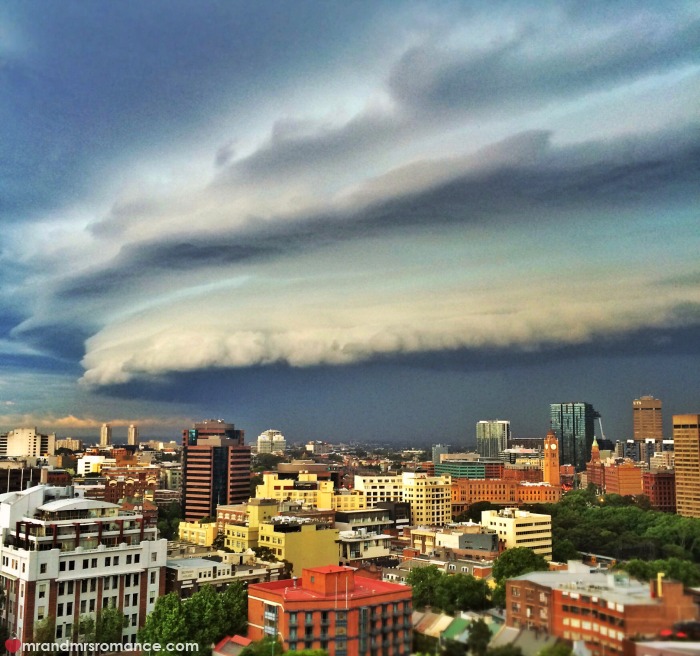 There was an incredible flash of brilliant white and the next thing we knew we were standing 10 feet apart. We just stared at each other.

We couldn’t believe what had just happened.

After we’d made sure we were both ok, we went back inside. We’d escaped injury by some miracle. Mrs Romance’s left shoulder where my hand had been was a little numb.

As for me, my right index finger, which had slipped off the wooden handle of the umbrella onto the metal shaft, was tingling and sore. The nail on that finger has never been the same since; the cuticle never grows properly, and the surface of the nail is always dimpled and uneven.

The umbrella was fine. 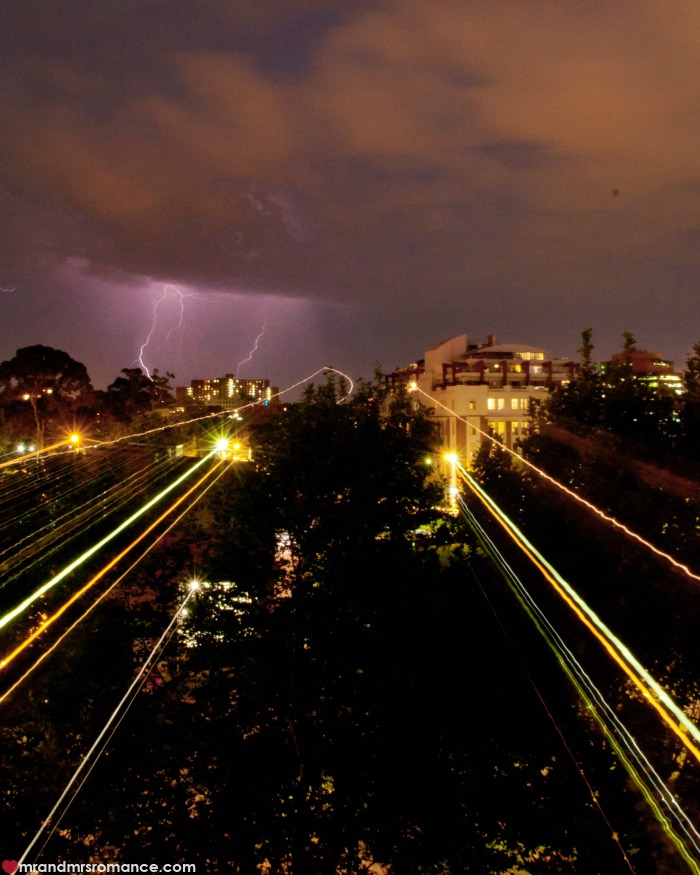 We think that the lightning had struck the tree or the washing line, or maybe even Mrs R’s car parked behind us, and had bounced onto the umbrella. It’s called a side flash.

The strangest thing is neither of us really remembers hearing the thunderclap. The one that got us.

A bit like the way that electricity makes a balloon stick to your shirt, perhaps this is why Mrs Romance and I have stayed together so long. We’ve both been positively charged!*

* I know in physics terms, if we were both positively charged, we’d repel one another – but it sounded better for us both to be ‘positive’! 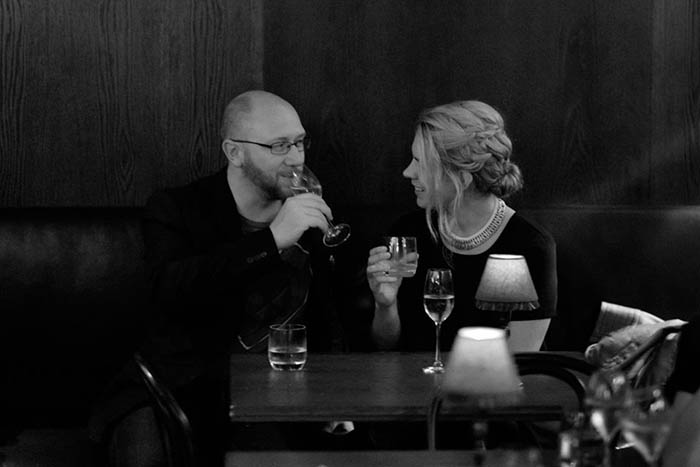 Many people die or are badly injured from lightning strikes each year. We were incredibly lucky not to have been burnt, gone into cardiac arrest, or suffered long-term nerve or brain damage.

Here’s a great animated guide of the different types of lightning strikes, and here some top tips for staying safe in a lightning storm – plus our own: don’t go out in a storm with a brolly!

Also, check out our post on how to photograph lightning here. 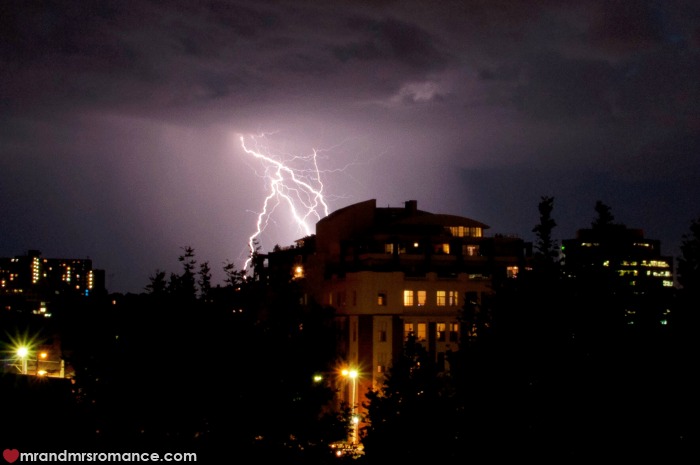 Do you love storms? Have you ever been hit by lightning or know anyone who has? What was a pivotal moment in your relationship? Tell us in the comments below!

When I buy her flowers