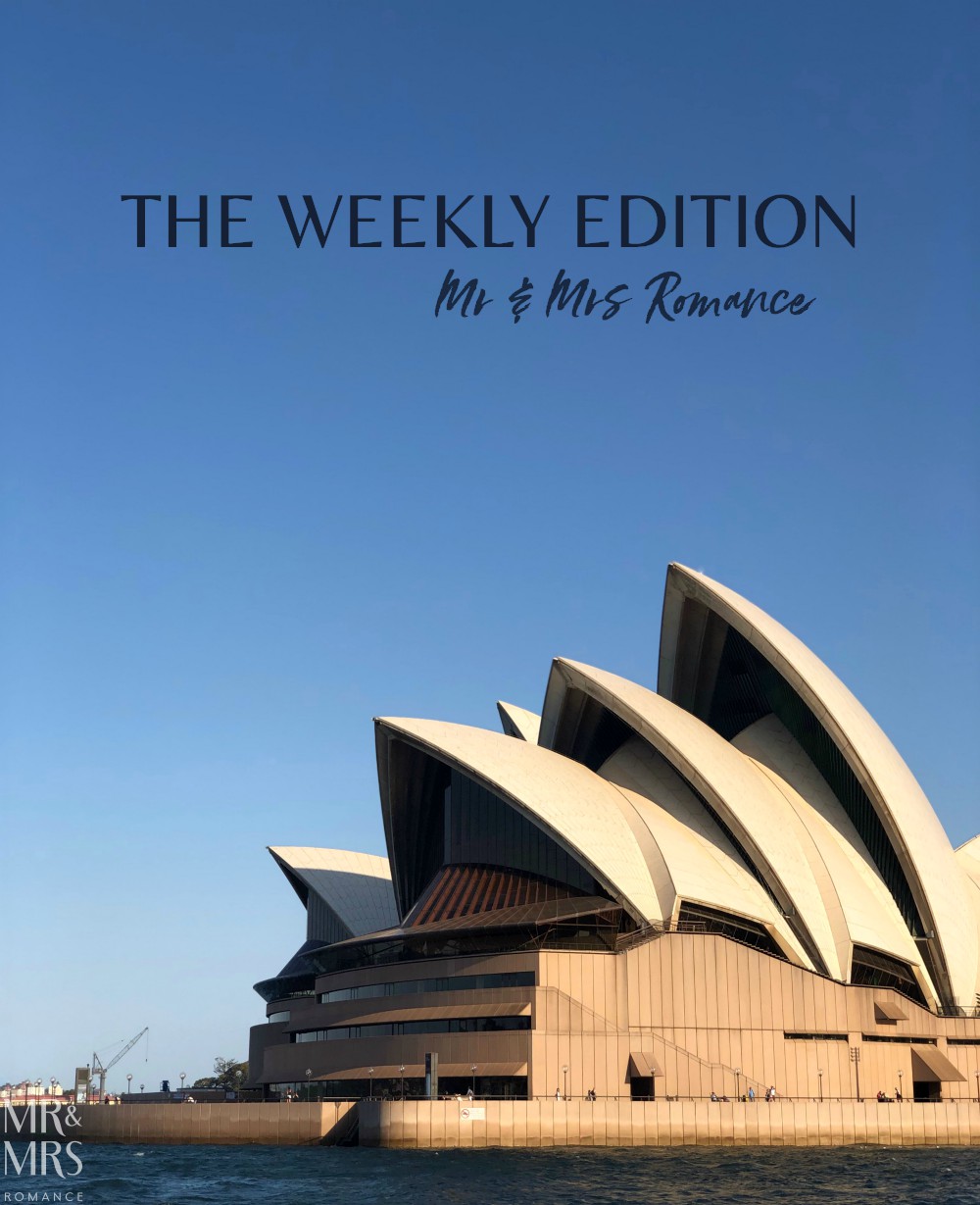 We’ve been lucky enough to have spent quite a bit of time in, around and nearby this beautiful building this past week. The funny thing is Christina showed me an article showing illustrations of other submissions for what the Sydney Opera House could have looked like.

Some were striking, others were nothing past dull. And a couple were downright ugly.

Sydney is so lucky that architect Jørn Utzon won with his design. It’s such an iconic building.

But with a trip to the theatre in Sydney Opera House’s Drama Theatre and a ferry to Taronga Zoo for another night of live music, we’ve been up close and personal this week. We’ve also got some incredible travel news to share with you.

We hope you enjoy this somewhat cultural Weekly Edition! 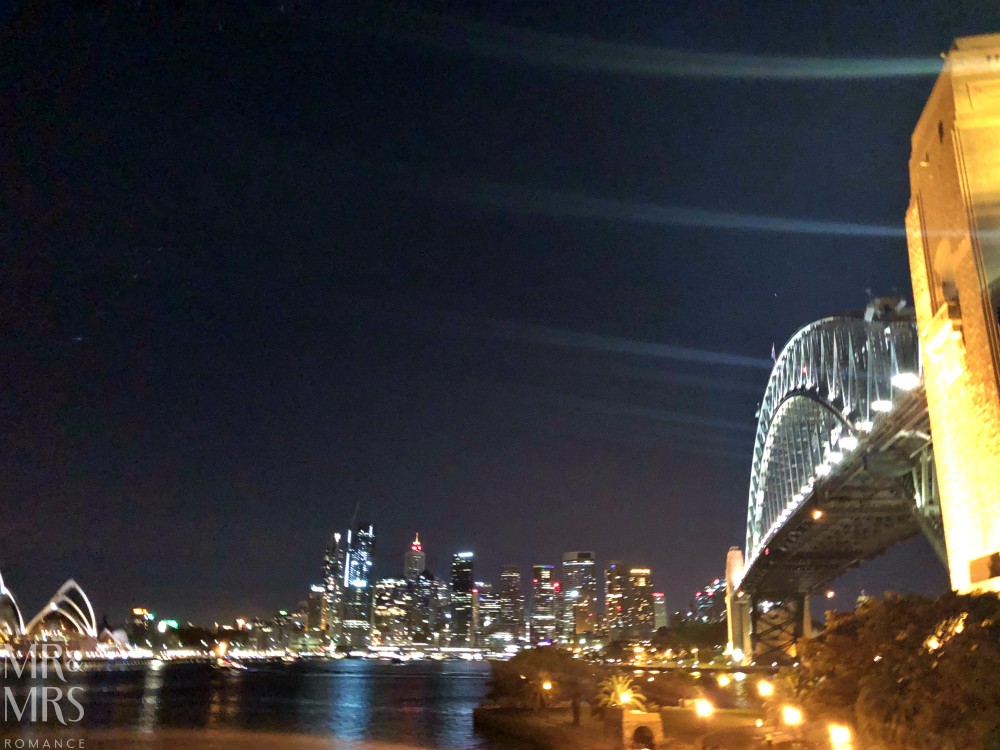 This evening, I’m swaying back home alone (Christina’s out with her mum) via this incredible view from Milsons Point and North Sydney after a night round my mate Pete’s house.

It’s his penchant for fine cigars, wine and Japanese whisky that I still very much share an enthusiasm for these indulgences. Not that he’s wholly to blame of course. We all have our vices – and as they say ‘a vice shared is a vice no more’*. 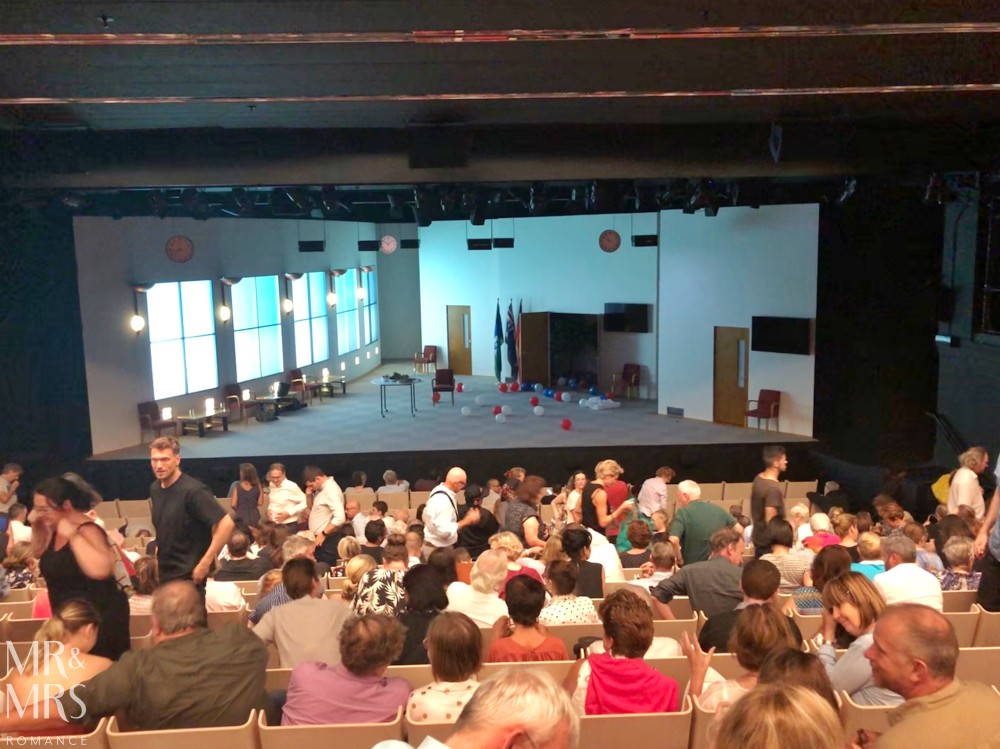 Tonight, Christina and I are back together for a night of political theatre. And I don’t mean we’re watching the machinations of the Lower House – not in real life anyway.

We’ve been invited to the Drama Theatre in Sydney Opera House to see Nakkiah Lui’s latest production with the Sydney Theatre Company – a satirical comedy called How to Rule the World.

This is Lui’s fourth play she’s written for the STC, and promises to be as entertaining as it is insightful.

How to Rule the World is a play about the toxic racism of Australia’s political system. The synopsis opens with:

An Aboriginal, an Asian and an Islander walk into a bar. It’s not the opener of a racist joke, it’s the booze-fuelled beginnings of an election campaign that will stretch the boundaries of their ingenuity – and ethics.

The first half of the play sets the foundations of how these three protagonists – Vic, Zaza and Chris – turn their sights on taking over Parliament House and battling the Man. 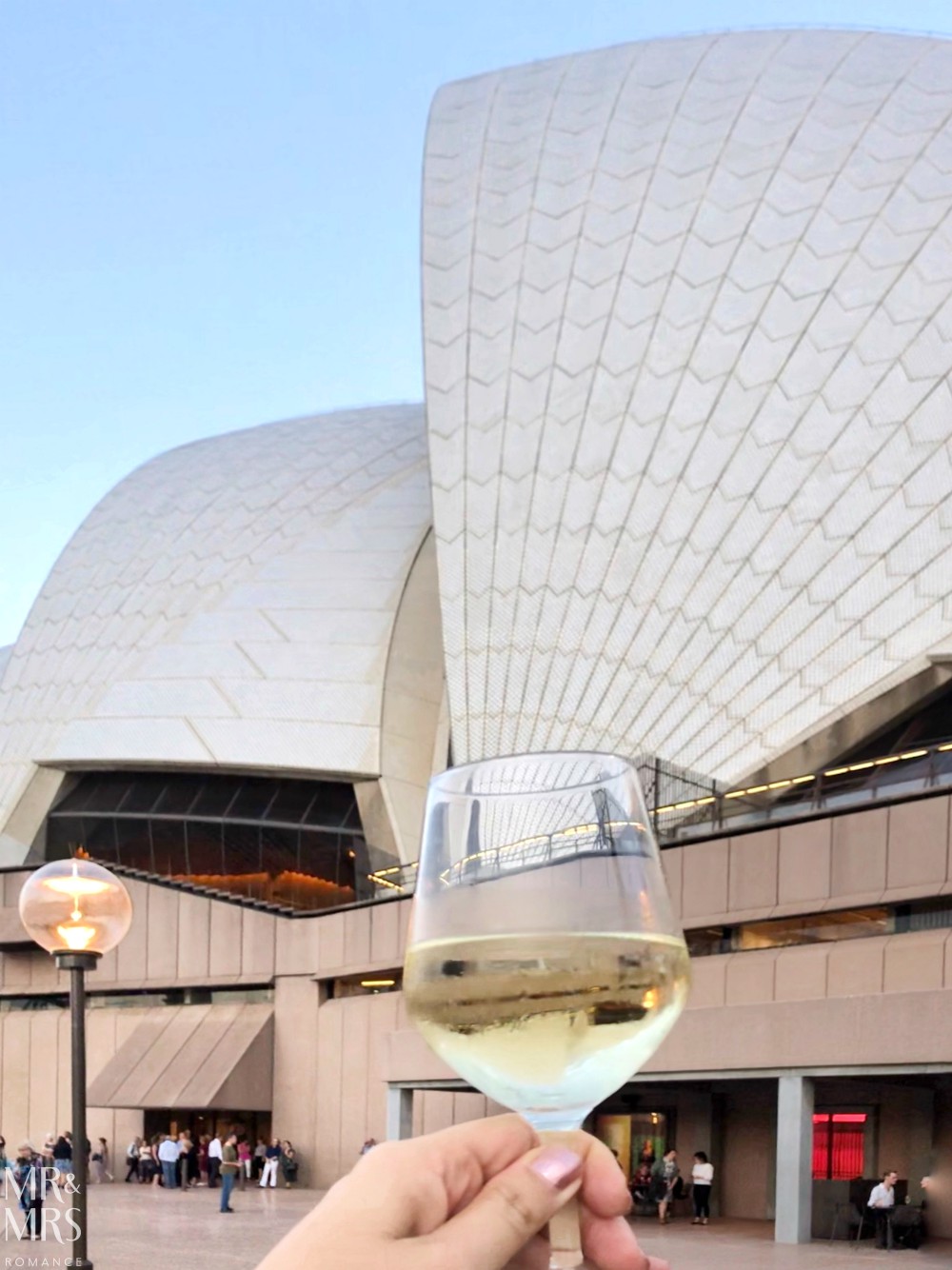 It’s intermission, so we nip to the bar for refreshments and to enjoy the view. This really is such an amazing venue. And the Drama Theatre is a great room to watch theatre. Even the seats further back give you an intimate view of the stage. 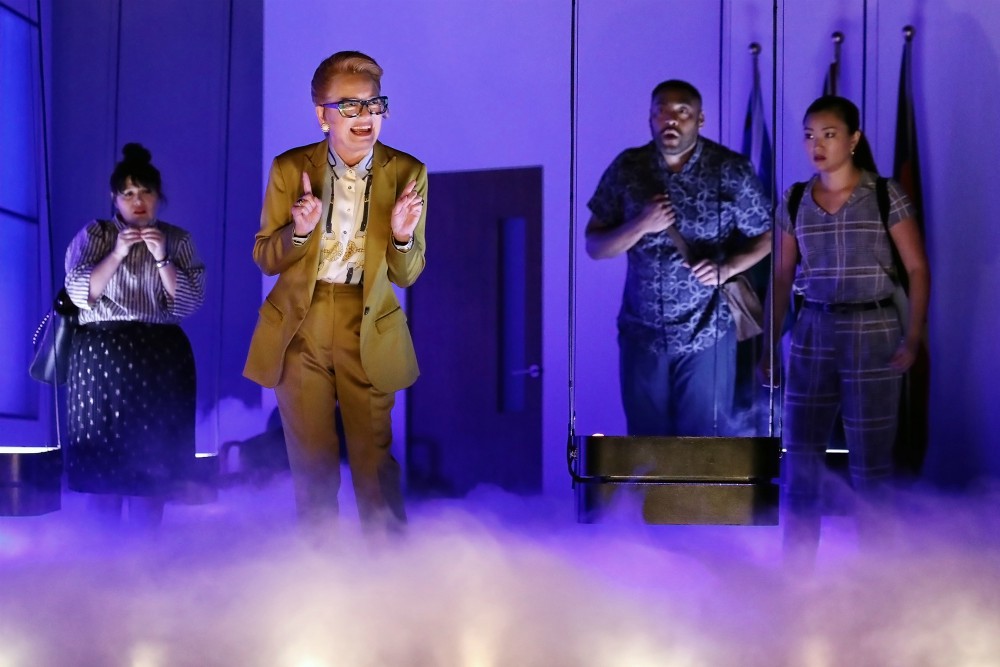 After the intermission, the plot ramps up. The Vic, Zaza and Chris look for ways to overthrow the power people, but they quickly realise their best weapon is cunning.

There’s no way that any one of them, not being white, could ever gain the traction needed to climb into a senate seat. They need a pawn – someone who fits a very specific set of criteria to make a worthy political candidate but one under their control. 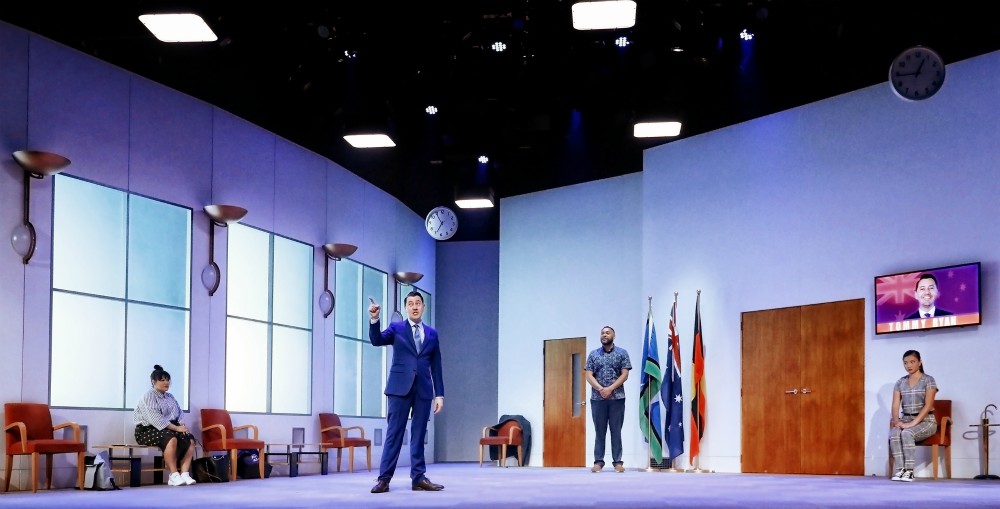 They find just the person. A white man with no apparent links to family, friends or intellect. They have their puppet and the strings are in their hands. A quick make-over and the persona of Tommy ‘Tomithy’ Ryan is born. 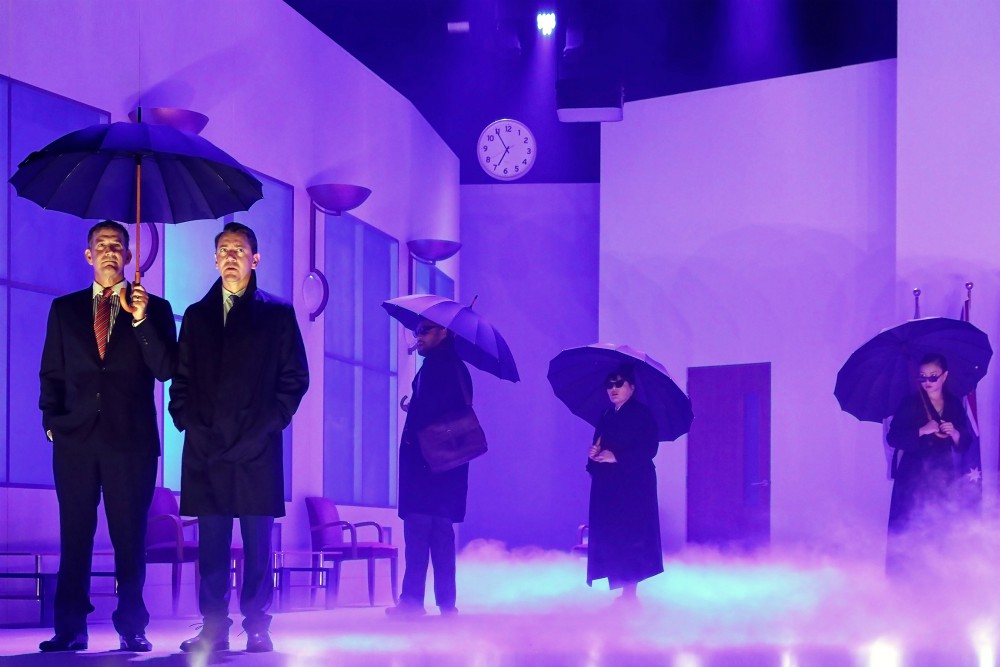 But it’s not long before ego and power corrupt simple Tommy and his climb to the top takes on a life of its own. It’s a tale of political Pinocchio, where Vic, Zaza and Chris are Geppetto, and their puppet creation Tommy discovers he wants to become a real boy. Politically speaking. 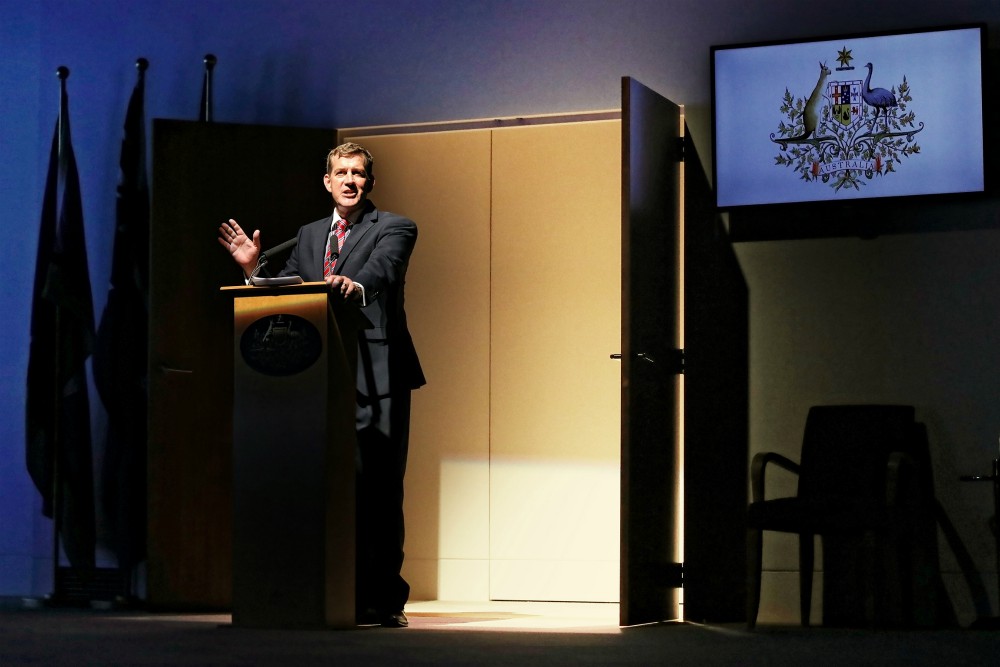 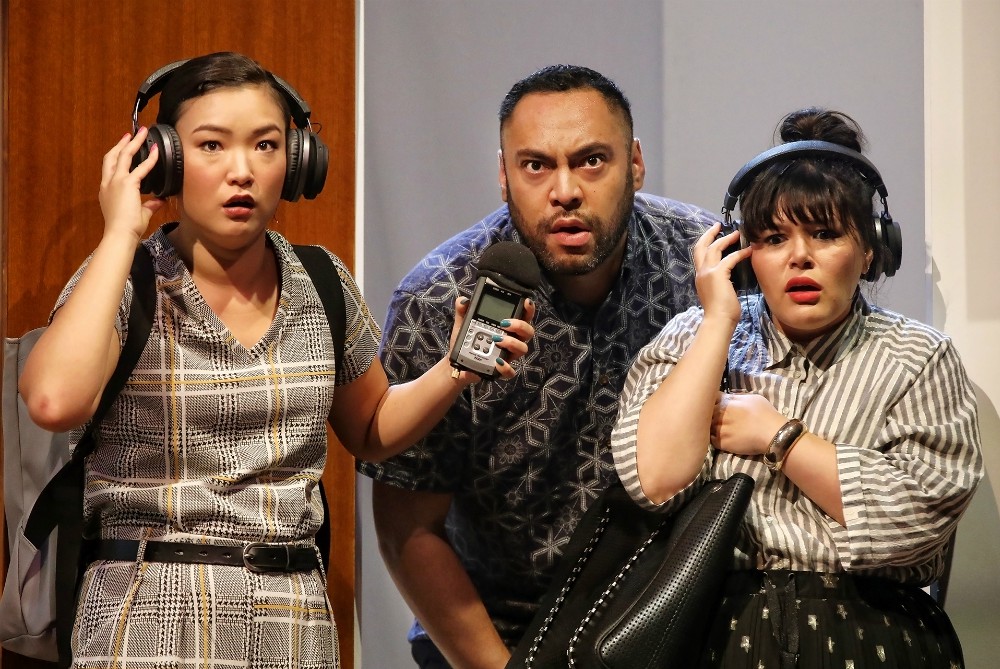 Nakkiah Lui’s play is brilliantly written and cast, and her craft has made us wonder why we don’t come to the theatre more often.

The messages in How to Rule the World are as strong, clearly argued and cleverly constructed as they are important. If you enjoy your political comedy, don’t miss this searingly sharp, well-acted performance.

How to Rule the World runs at the Sydney Opera House until the end of March 2019. Get your tickets here. 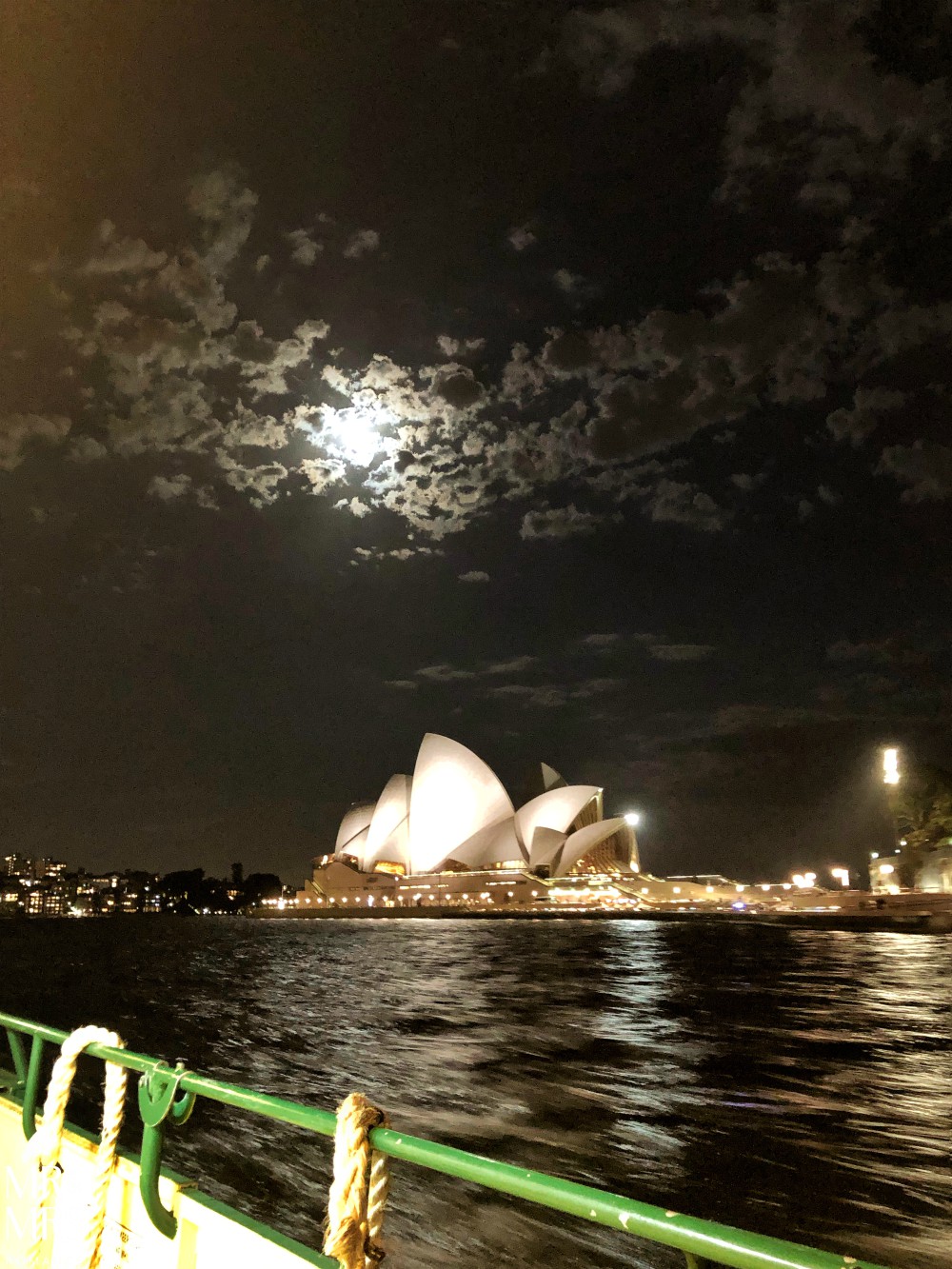 It’s been a surprisingly lovely evening. I say ‘surprising’ only because I’m always apprehensive about trips to the theatre. As I mentioned, I’m not really a ‘theatre guy’ – if that’s a thing. I’ve been to the theatre a bit in the past; my sister would always buy the family West End tickets for Christmas before I moved to Australia. It wasn’t always well-received.

On the other hand, I’ve been to some amazing shows that I’ve really enjoyed. I saw a performance of The Woman in Black when I was at high school. It was so good, it lead me to read the book it was based on by Susan Hill, which is just as chilling.

But since seeing How to Rule the World goes, I have a feeling there’s no gamble. I’ll always back the Sydney Theatre Company to put on an impressive show.

And the trip home from Circular Quay isn’t bad either. 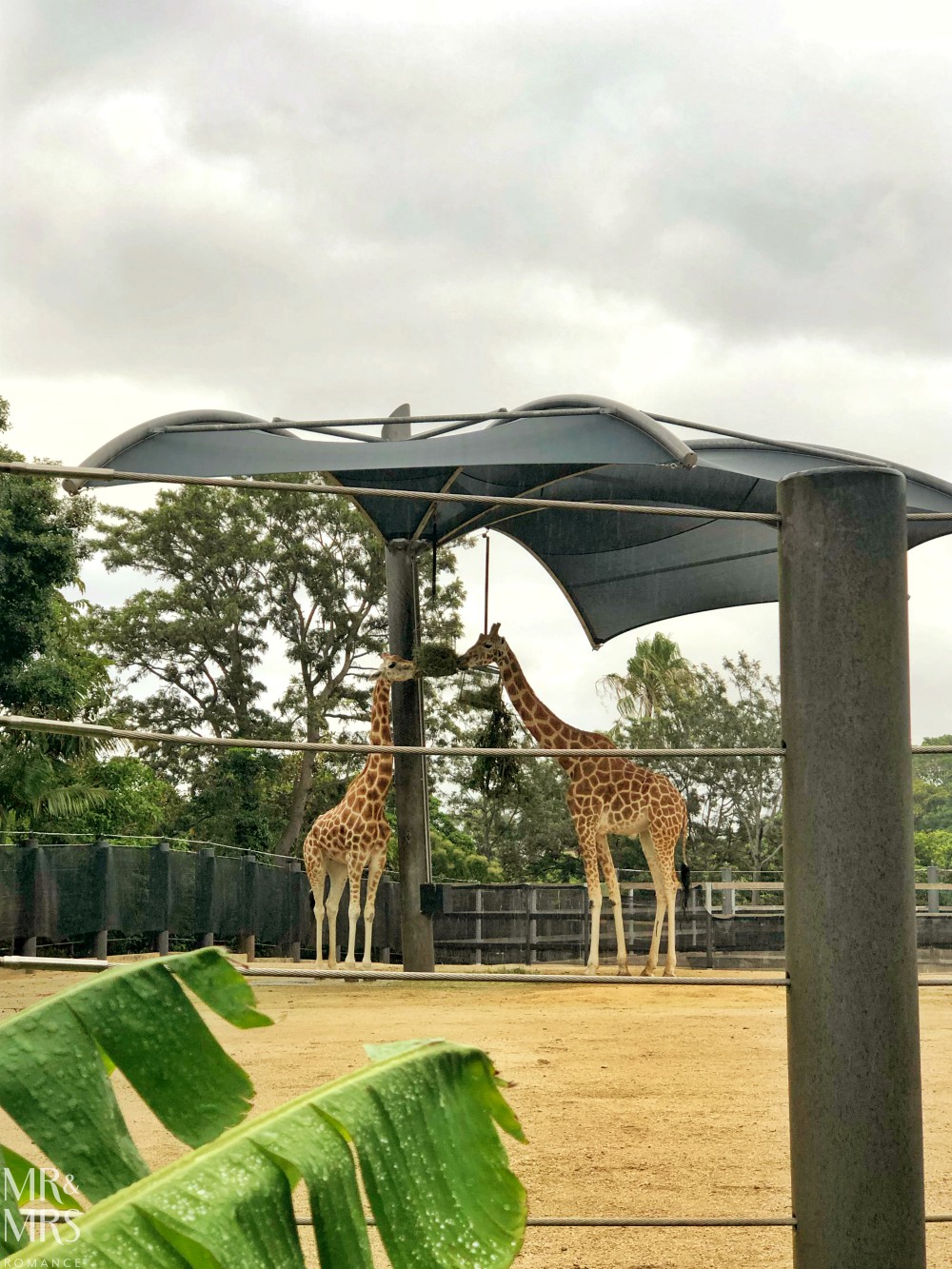 This evening, we’re out for more live entertainment. These giraffes are just a hint for you – they’re cute, but they’re not the entertainment tonight.

We’re at Taronga Zoo again for another night of live music and we’re pretty excited. Twilight at Taronga is one of the most unique and iconic venues for a music concert I’ve ever heard of. We were lucky enough to be at the opening night a few weeks ago, and we’ve been invited back tonight to catch some more local and international talent. 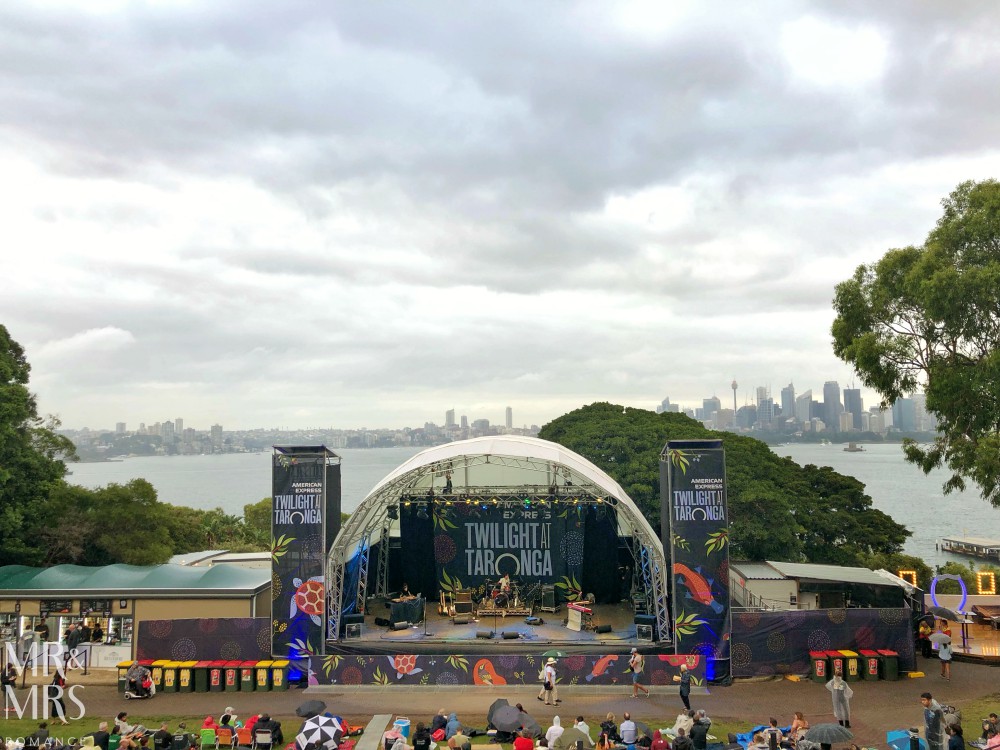 The first act of the night is a young musician called Dobby. One of the up-and-comers of Australian music to be sponsored by American Express’s inspiring Music Backers Grant programme.

With a budget of $1m, Amex is helping young musical talent get in front of the fans they should have and working to keep live music going in Australia. Gigs like this one at Taronga Zoo, which American Express is the major sponsor, are such amazing opportunities.

We’re so impressed with Dobby. I have no idea where he gets so much energy from though. A whirl of motion and sound, his hip-hop and rap tracks are killer. Make sure you check out this Filipino and Aboriginal multi-instrumentalist and singer on Spotify and Youtube. 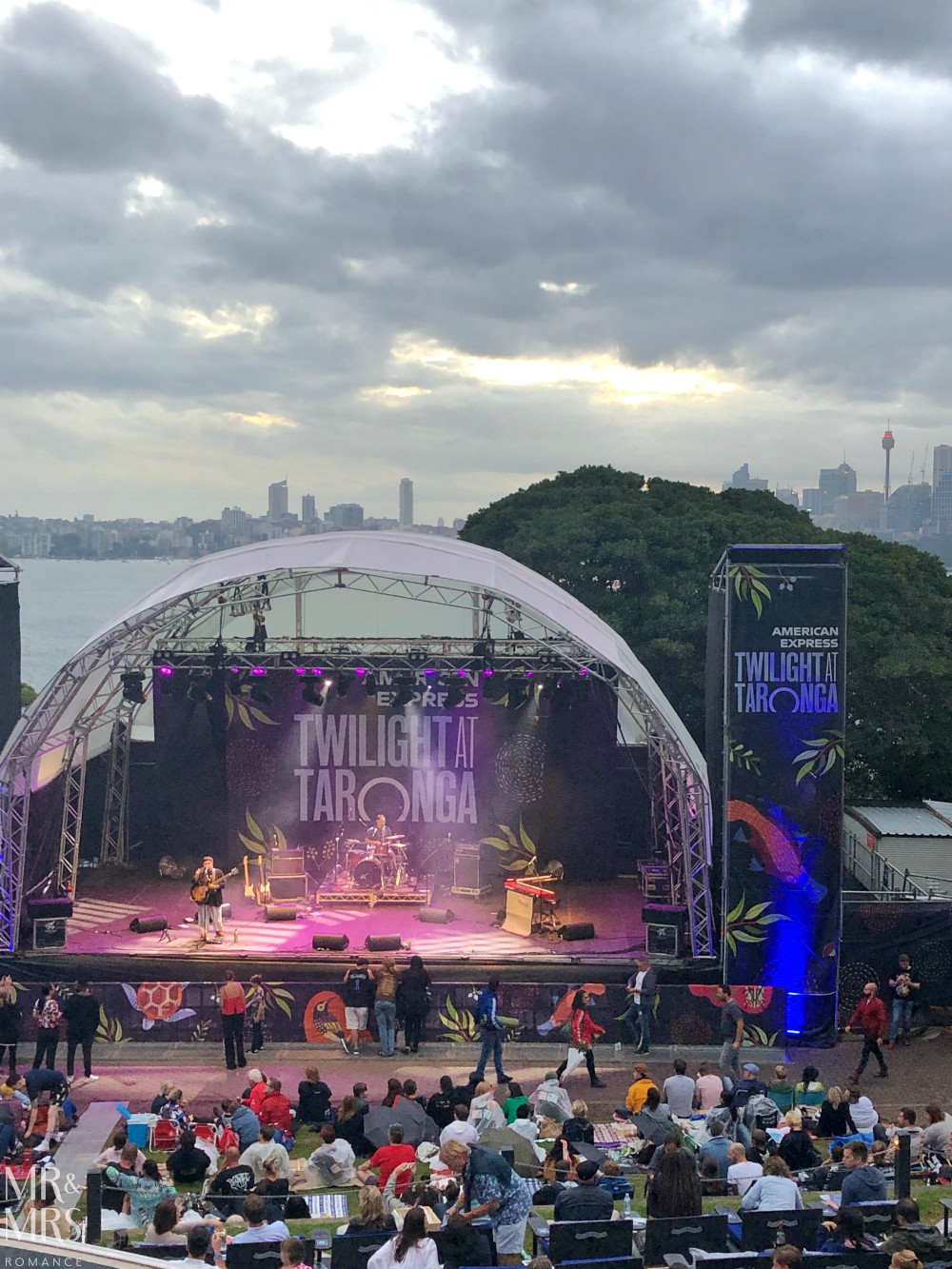 Next on stage, and also a recipient of the Amex Music Backers grant, is Mojo Juju. This Melbourne-based musician and song-writer has – much like Dobby – an amazing stage presence. She is also of Filipino and Aboriginal descent, and her messages carried through from her music are important, cultural and powerful.

She’s also amazing on the guitar.

The Amex grant from the Music Backers programme is allowing Mojo to explore different musical paths with fewer budgetary restrictions that hamper creativity in this competitive and expensive industry.

Keep an eye out for this already established musical talent and check out her work from her website here. 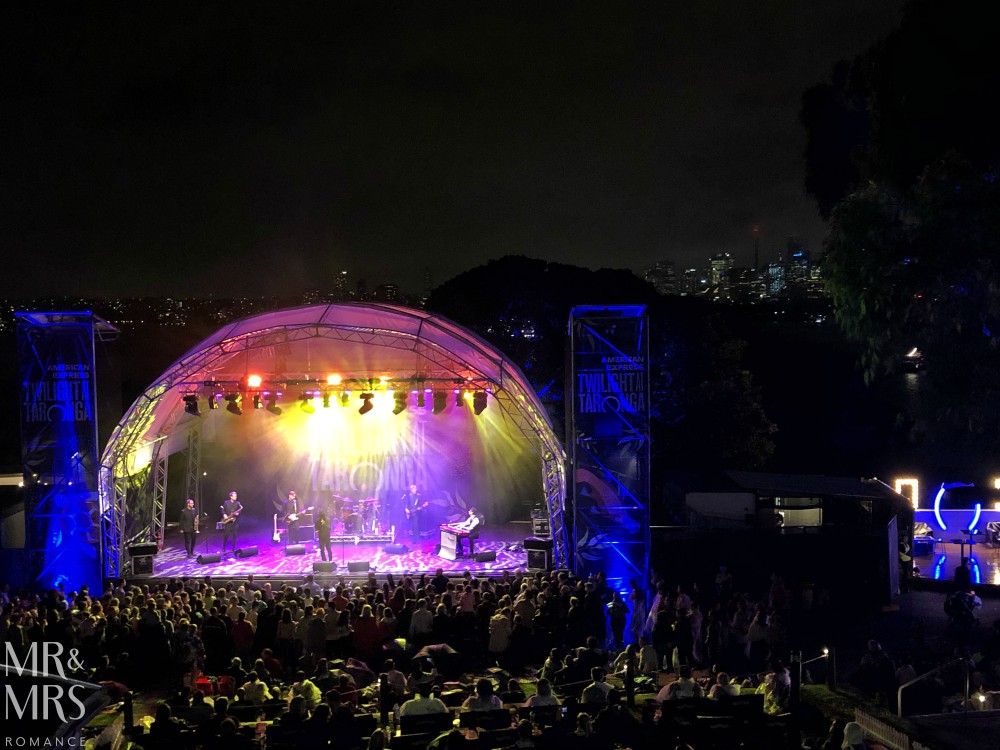 As the light slowly flees the Sydney sky, the main act of the evening takes the stage. Aloe Blacc, quite possibly the coolest person we’ve ever seen, starts his first set.

Looking out from Taronga’s new restaurant The View, we can see the crowd responding to him and his music. 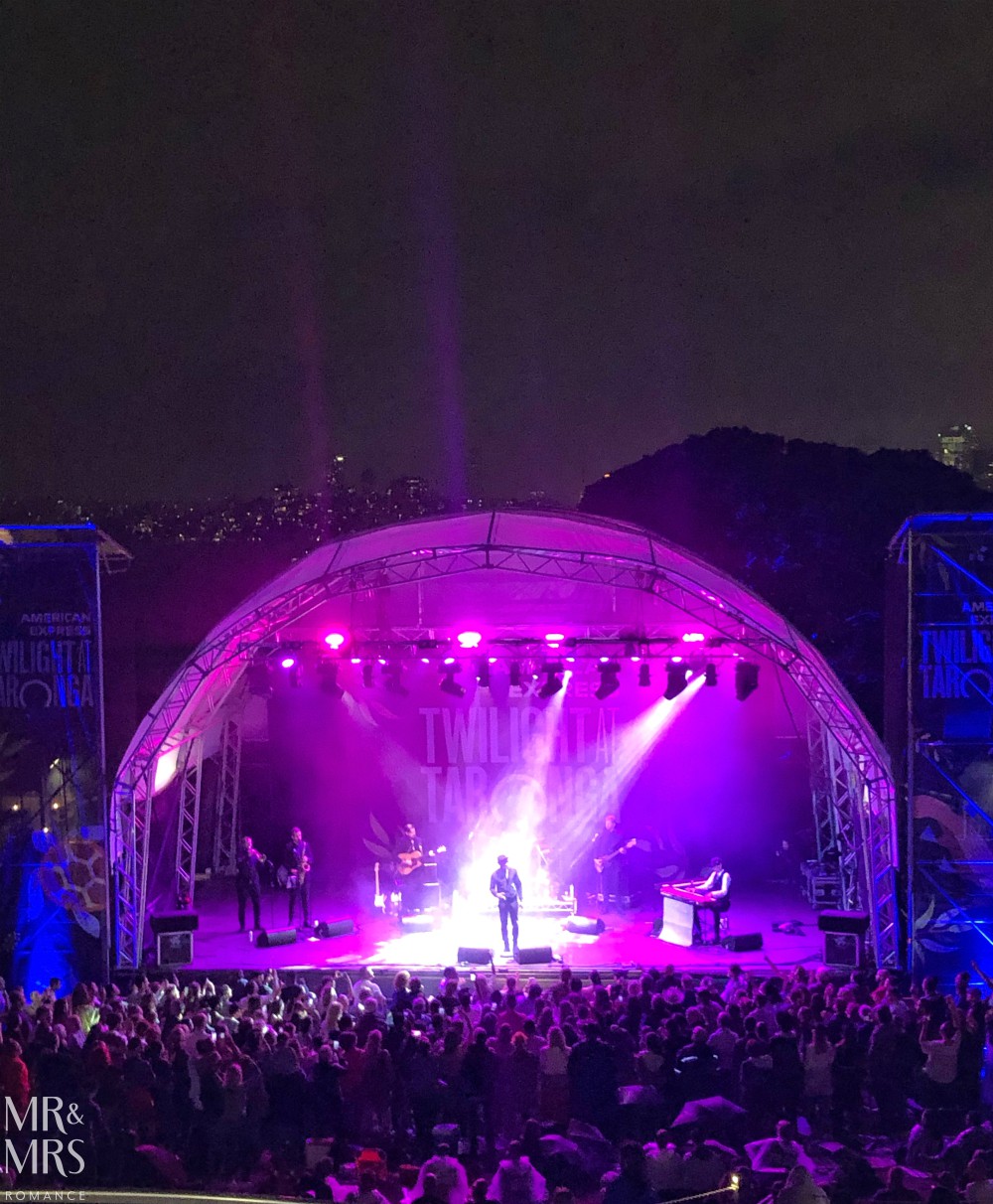 Aloe Blacc’s got some classic songs we love, and the audience go off when Aloe’s band strike up the first bars of Wake Me Up and, towards the end of the night, more of his hits like super catchy I Need A Dollar.

In between tracks, he’s bantering with the crowd and teaching dance moves that look insane when anyone else tries them… he’s just that cool.

It’s a great night and one not to be missed. If you love your music live and your animals wild, make sure you get to Twilight at Taronga while it’s still on.

There are two more concerts on (2nd March and 8th March) plus a comedy gala on 9th March. Get your tickets and more info here. 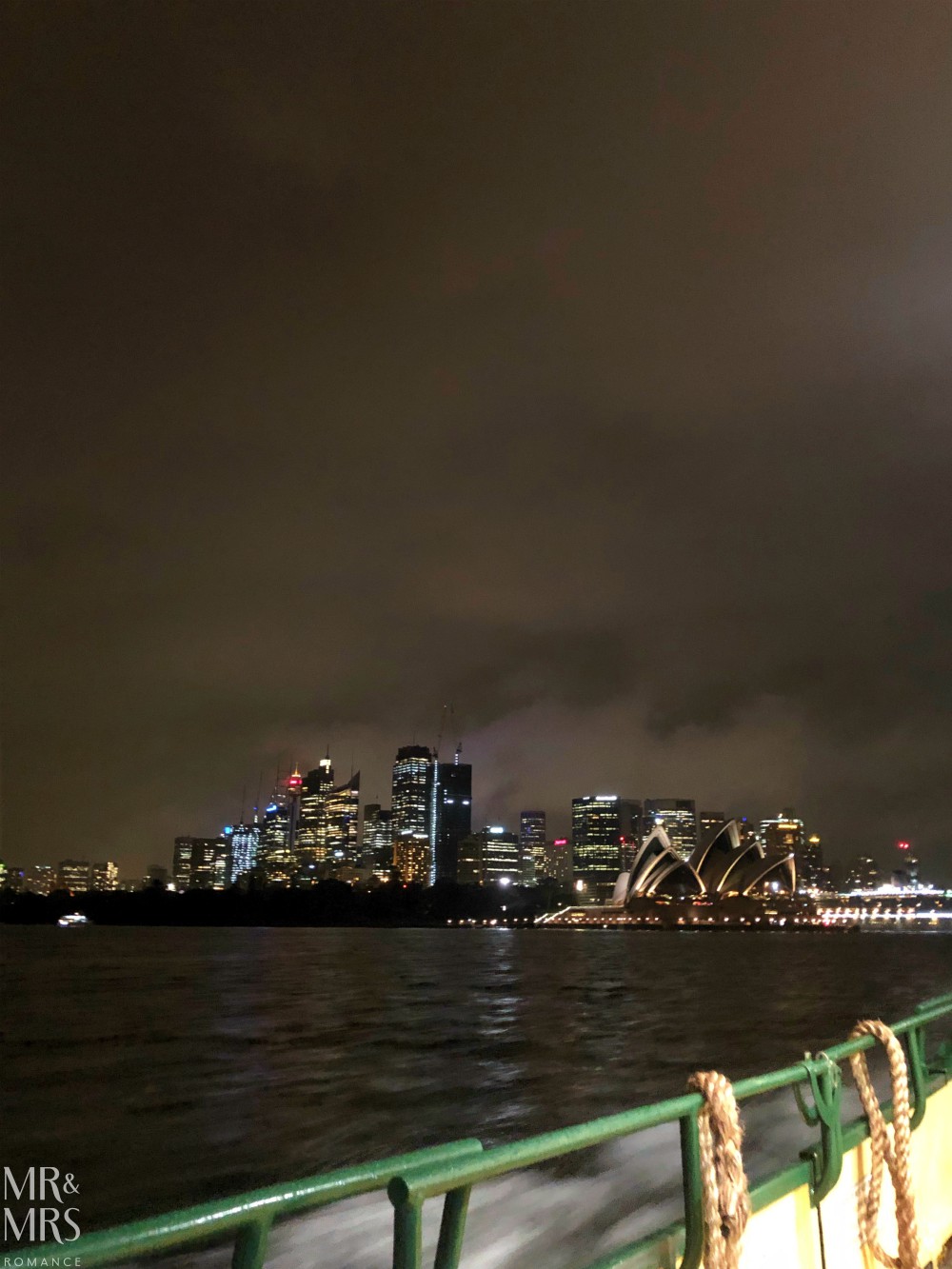 The ferry ride back to the city after a night of live music is a lovely way to end the evening. The city lights twinkle on the harbour and the Opera House leans out towards us as we pass her by. 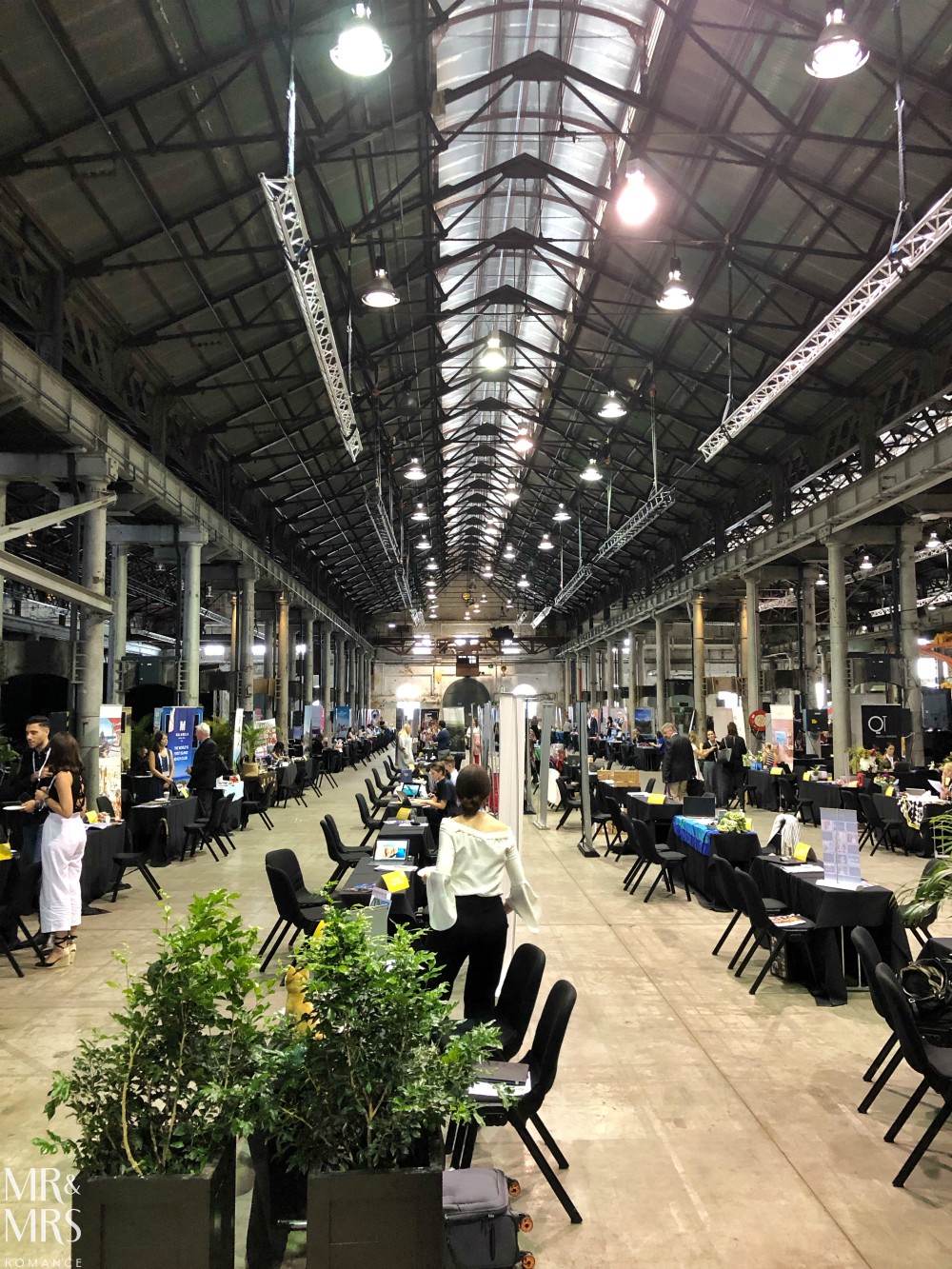 This morning Christina and I are mustering all our energy for a whole day of ‘industry ‘speed dating’. It’s the IMM – the International Media Marketplace by TravMedia. It’s an incredible resource for travel writers – puts us in touch with hundreds of travel providers and representatives. It’s an amazing opportunity to work out more detail for where we’ll be travelling to this year and beyond.

We’ll have 15 minutes with 24 different companies throughout the day. What you can see here is only half of the enormous venue at the Australian Technology Park in Redfern. TravMedia has done a brilliant job of pulling everything together. 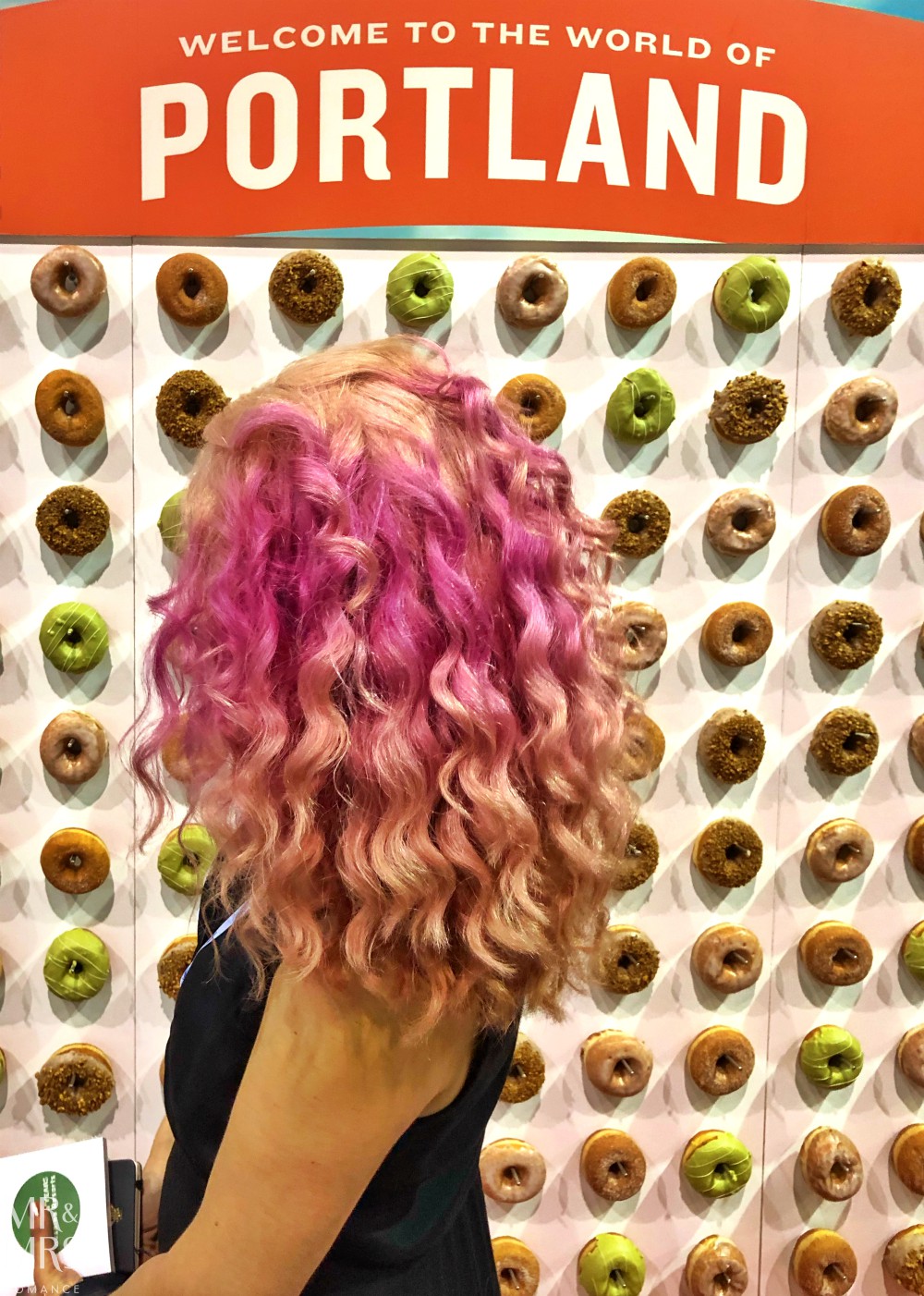 Before we start our day of micro-meetings, we spot this wall of donuts! Christina can’t resist the temptation of a hair photo for Hair Romance. And I only just resist the urge to start munching on the display!

Welcome to the World or Portland indeed. 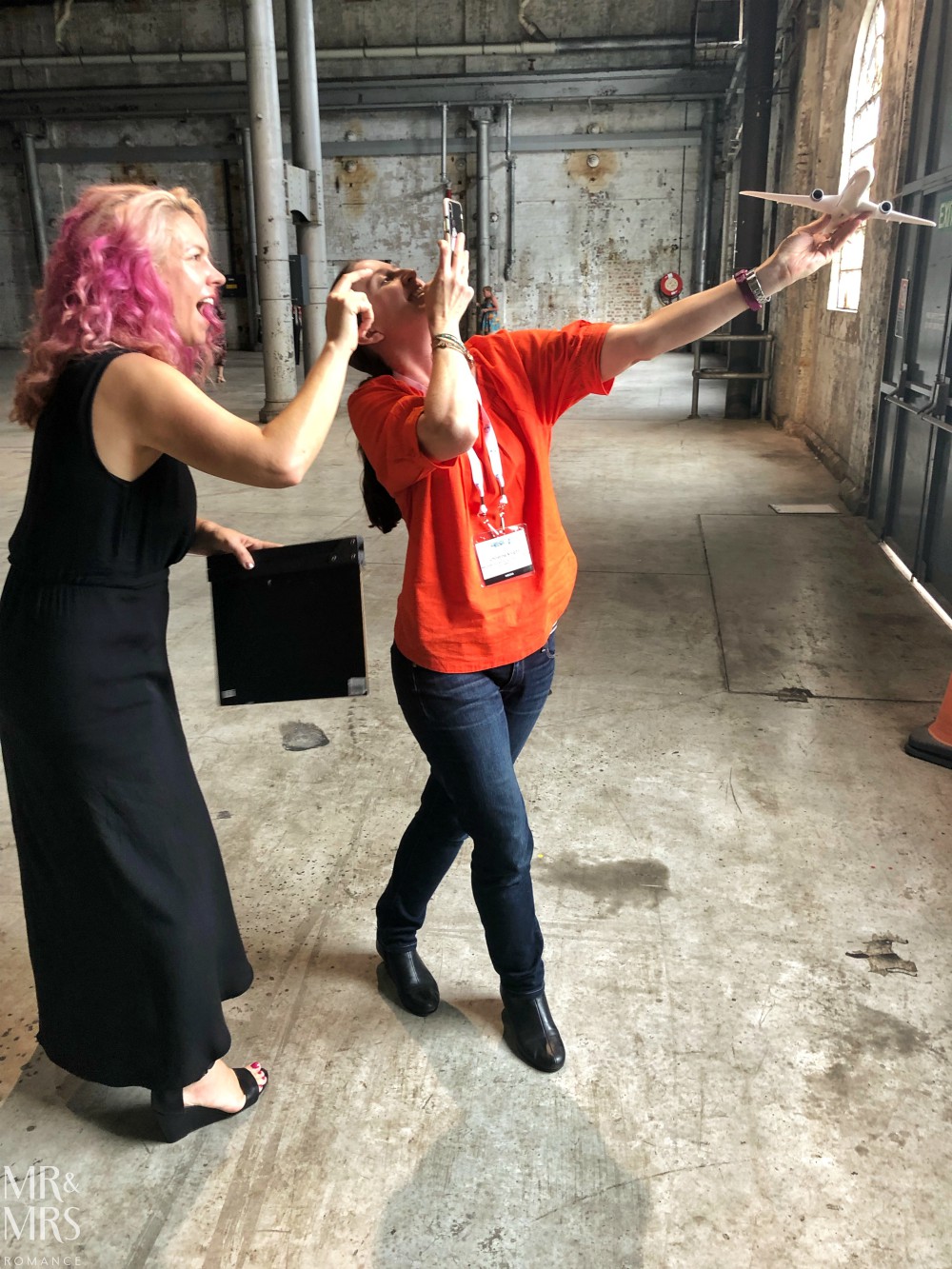 Apart from the craziness of so many back-to-back meetings with so many impressive companies (there’s everything here from national tourism boards to boutique hotels), there’s a lot of chance for a bit of fun. United Airlines has put up a photo competition today with the chance to win a return Business Class flight with them to LA.

It’s a pretty amazing prize, and Christina and I and our talented travel writer friend Christine Knight grab some United Airlines props and have a crack. You can check out the other Instagram entries via the hashtag #UnitedJourneys. 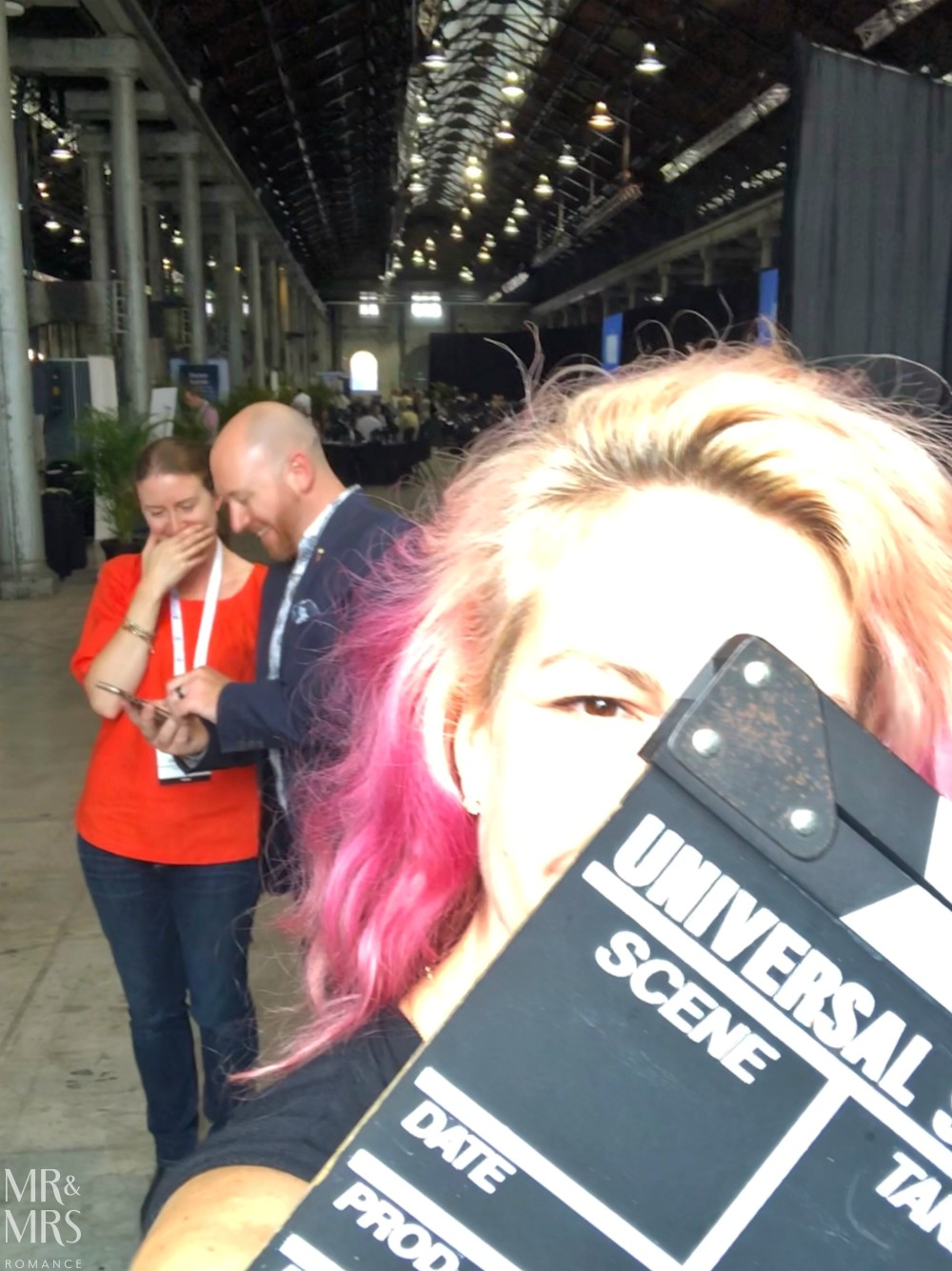 Next, Christina has a go with the clapper board United have as a prop. Let’s see what she has in mind. As you might notice, Christine and I aren’t that interested! 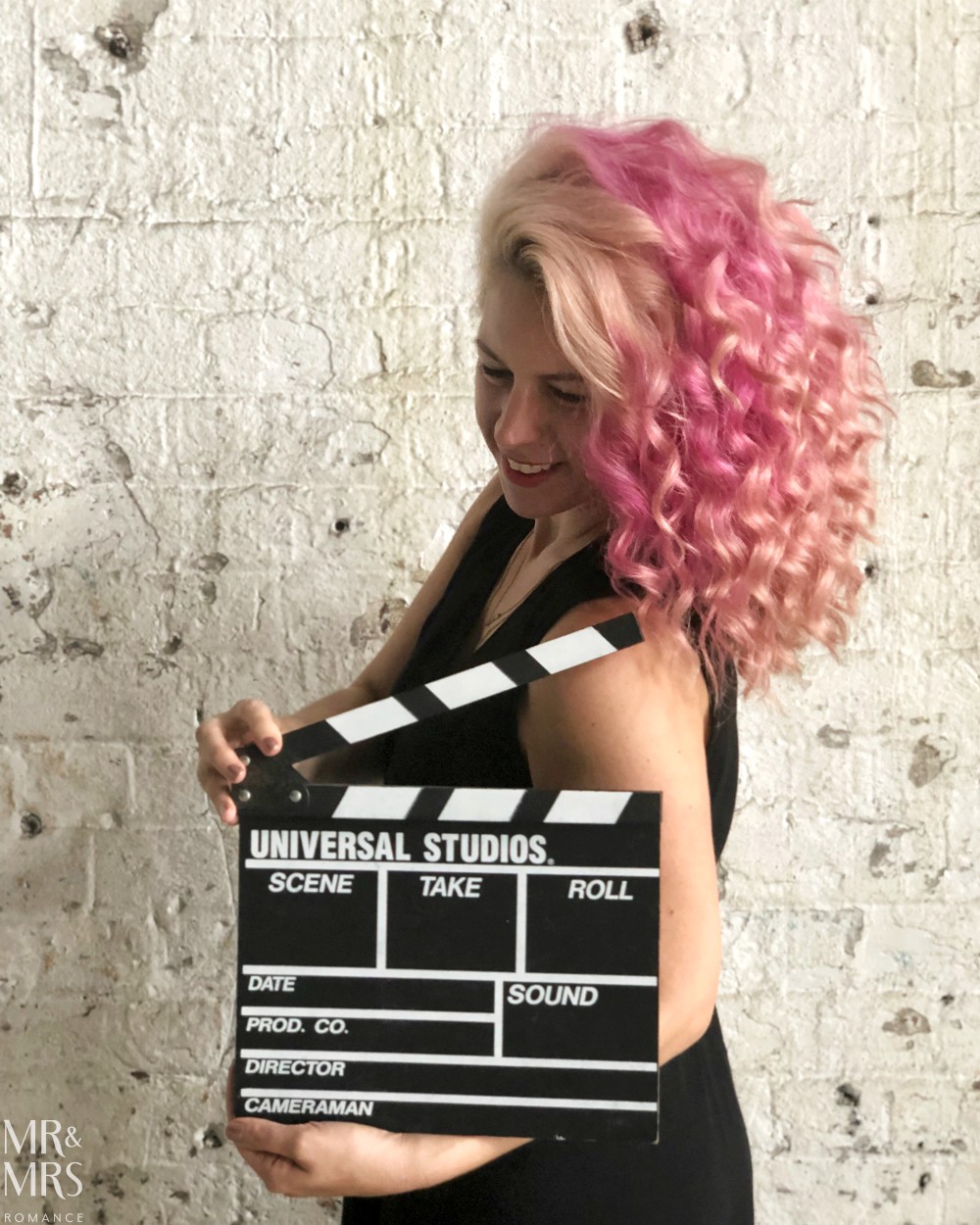 That’s pretty good, Christina, but will it win? 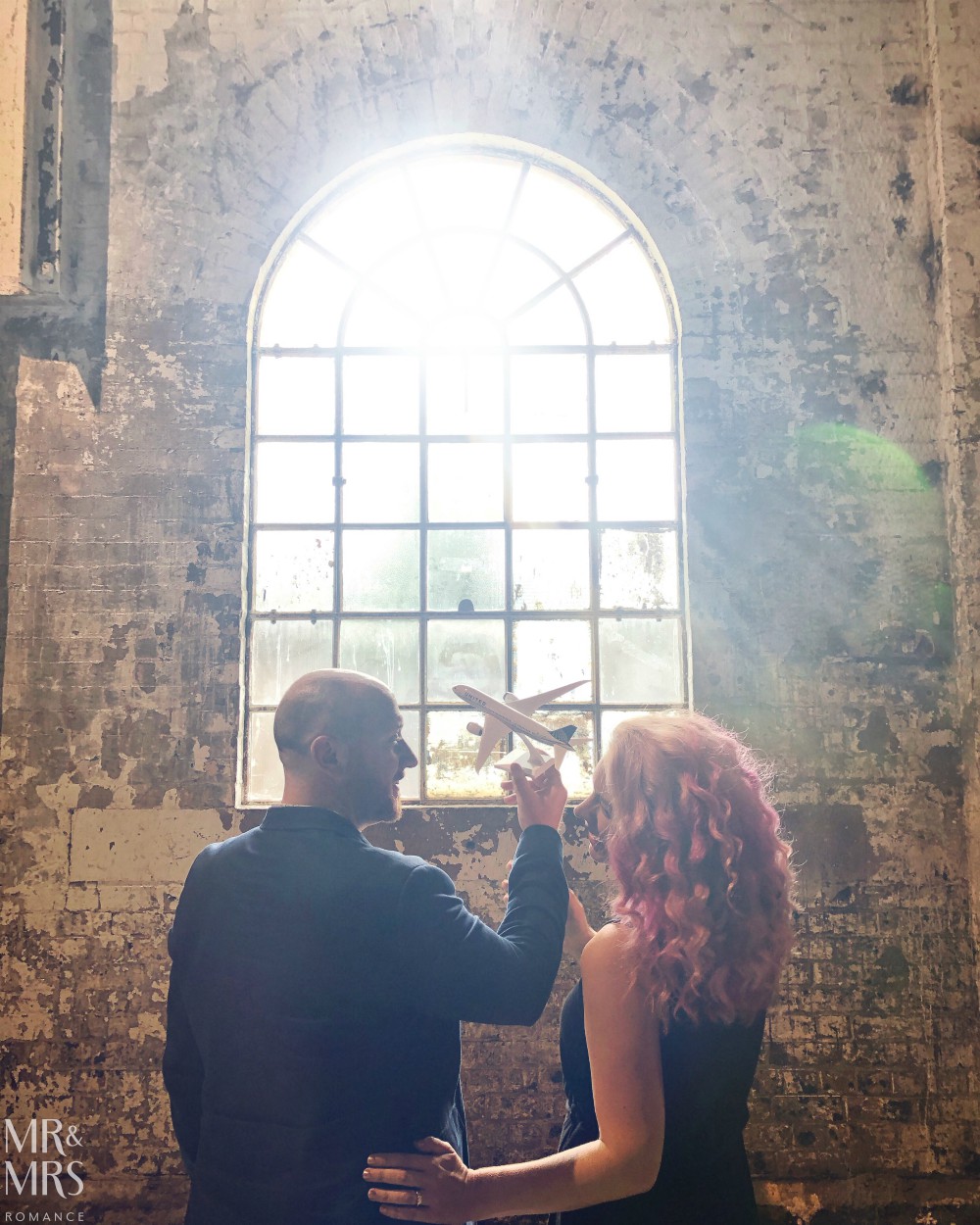 That’s right, we’ve won a Business Class flight to California and back. Thank you so much, United Airlines. Now all we have to do is work out where we’re going… so many ideas, so many options. 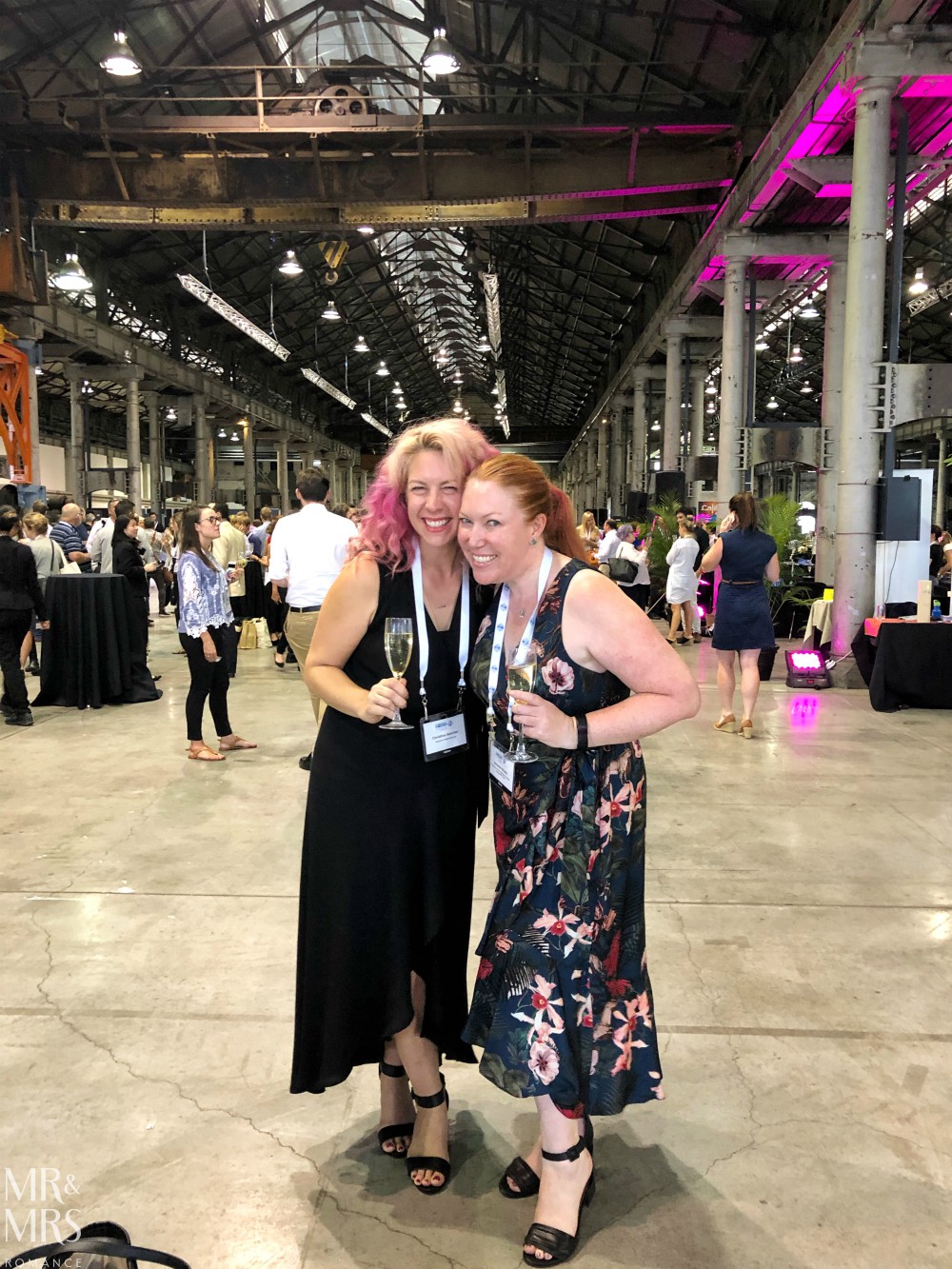 Our last appointment finishes and we make our way quickly to the bar. It’s wine time. And it’s also time to catch up with friends. We’ve seen them on missions to get to meetings running around this amazing venue all day but had no time to chat.

We’ve been aching to see our talented mate Amanda Woods from Adventure All Around all day.

The other things that are aching though are our feet. It’s been a hefty day for everyone, and the culmination of so much work and organising. We’ll sleep well tonight I think!

How to take photos of lightning with your iPhone!

I reckon I’ve wasted so much time over the years trying to take a picture of lightning. I’ve even tried to take screen-shots of…