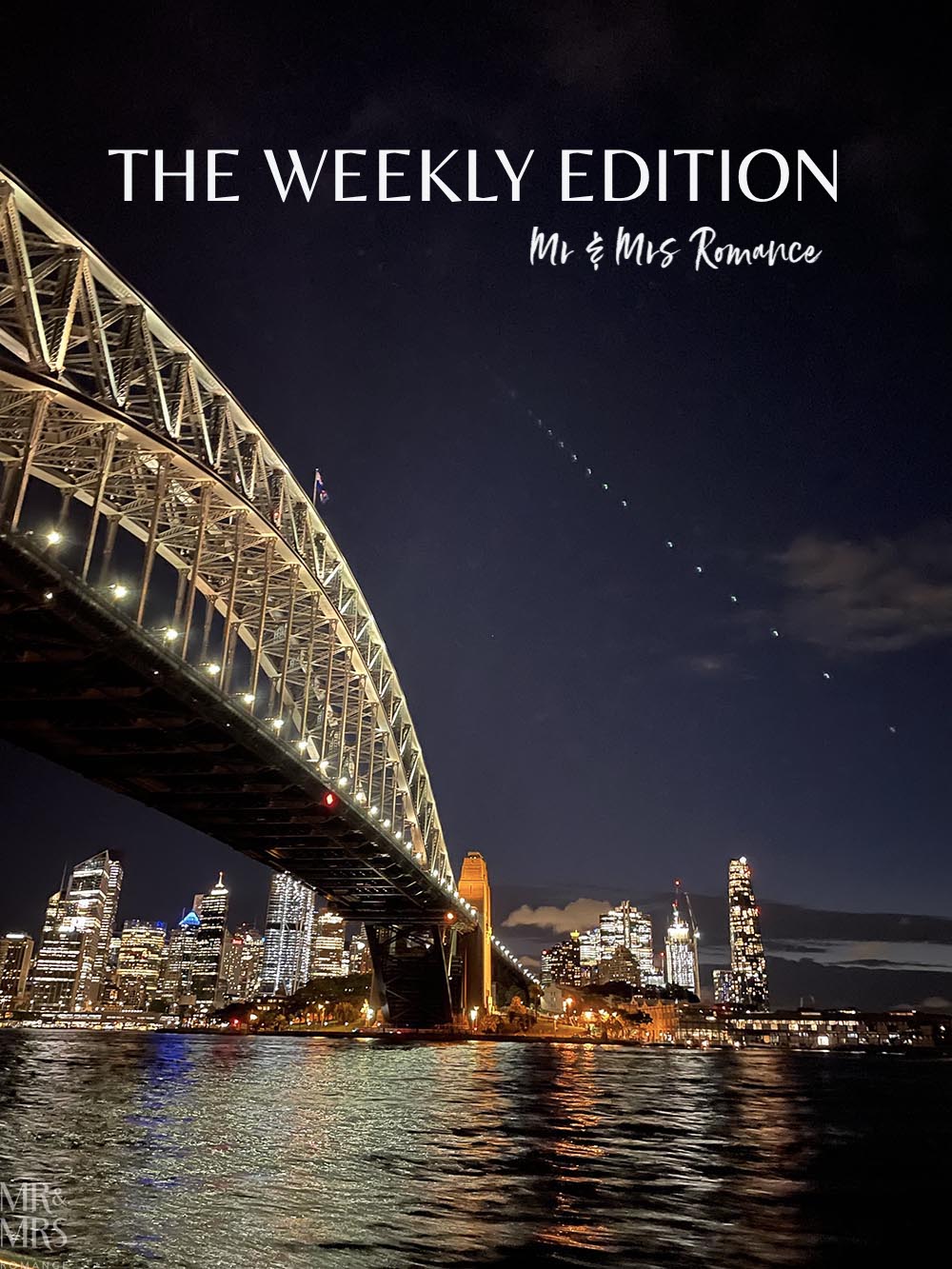 Silly Season really has really kicked off since December opened its doors. Perhaps more so this year than any other. Definitely making up for lost time after all the lockdowns and travel restrictions.

In fact this week we’ve been to more parties and functions, done more socialising and travel than any other time since March 2020!

Dinner with mates, super-yacht festival launches, new bars and distilleries starting up, and the first of (hopefully) many fun Christmas parties – the end of 2021 is going for that big bang.

We hope you enjoy this Edition. 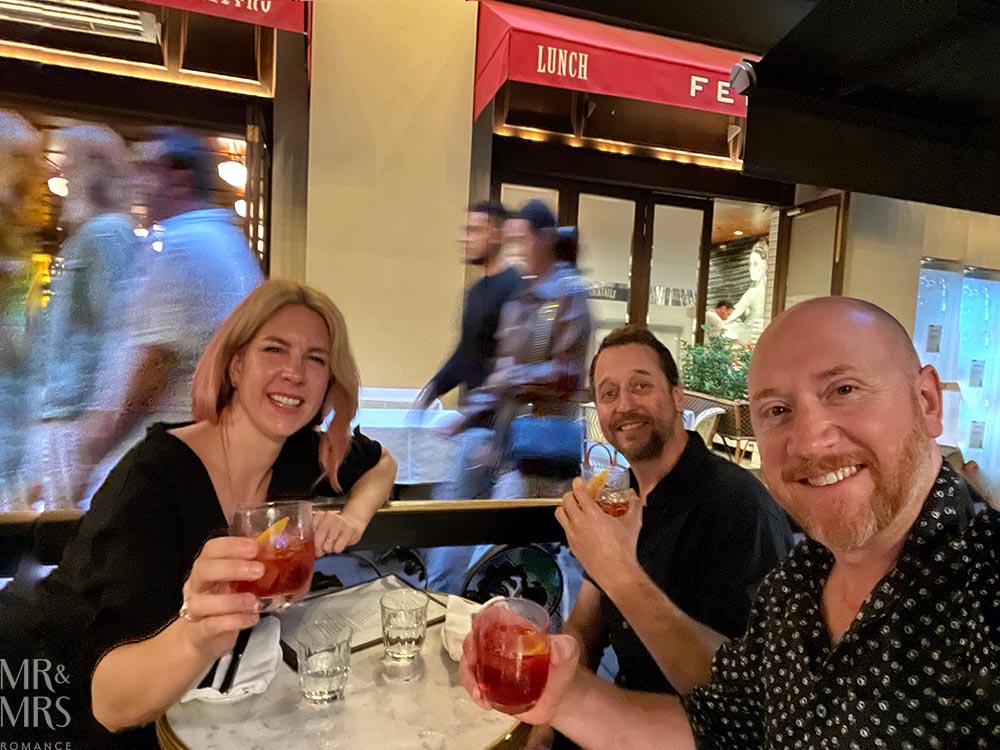 Not a bad way to start the week: drinks and dinner with our dear friend Anton. We’re at Ash Street Cellars in the city. A fine negroni, great food and – of course – even better company.

It’s so good to see the CBD start to liven up again here in Sydney. Things have been too quite round here for too long. 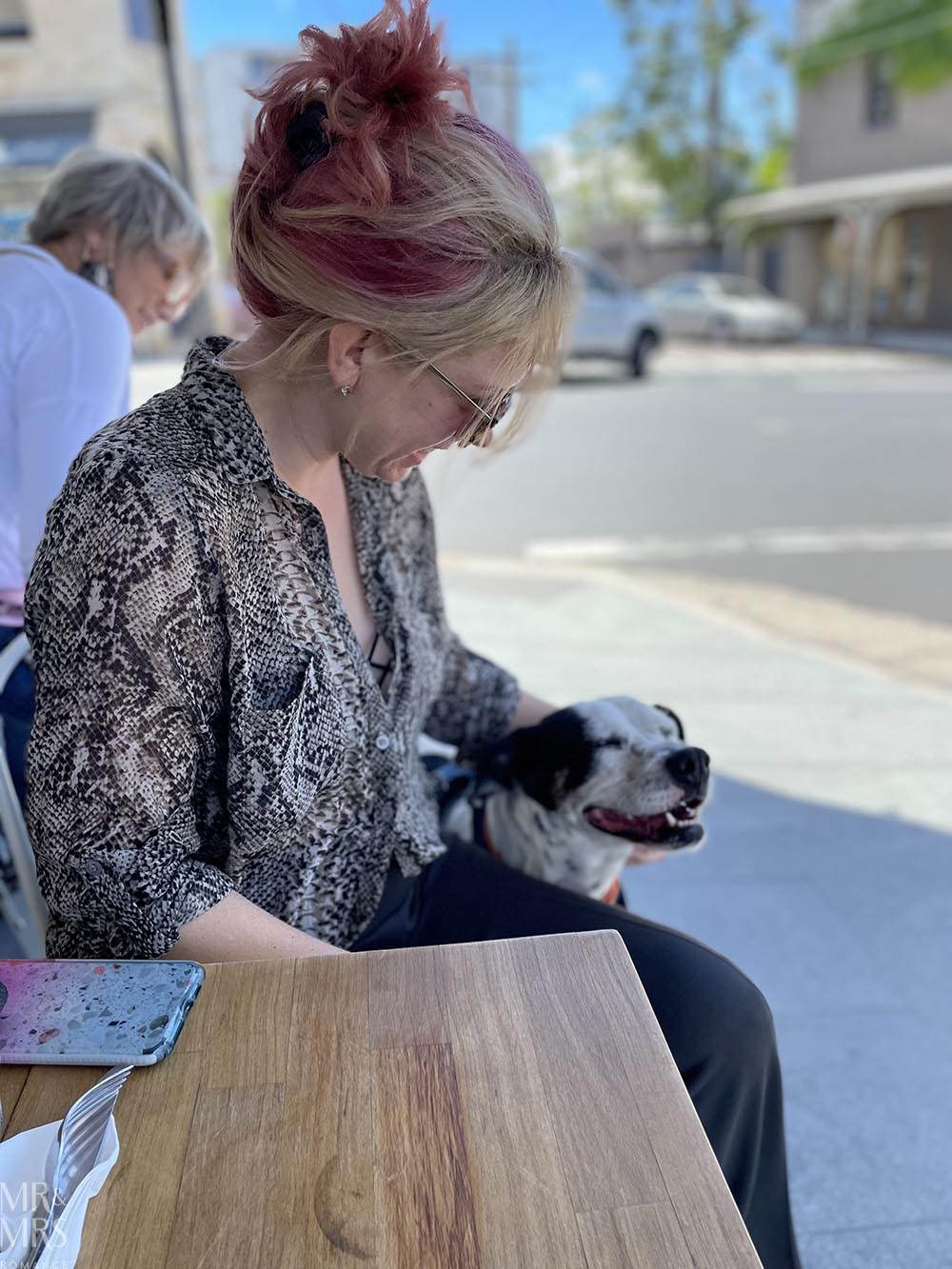 We may have been a bit too over-excited with last night’s dinner. There may have even been more bottles of wine ordered after the meal than was really necessary too, but that’s ok.

We’re at Euforia Cafe in Balmain trying to reclaim a bit of sanity – I think Christina’s getting a bonus endorphin boost from this beautiful dog. 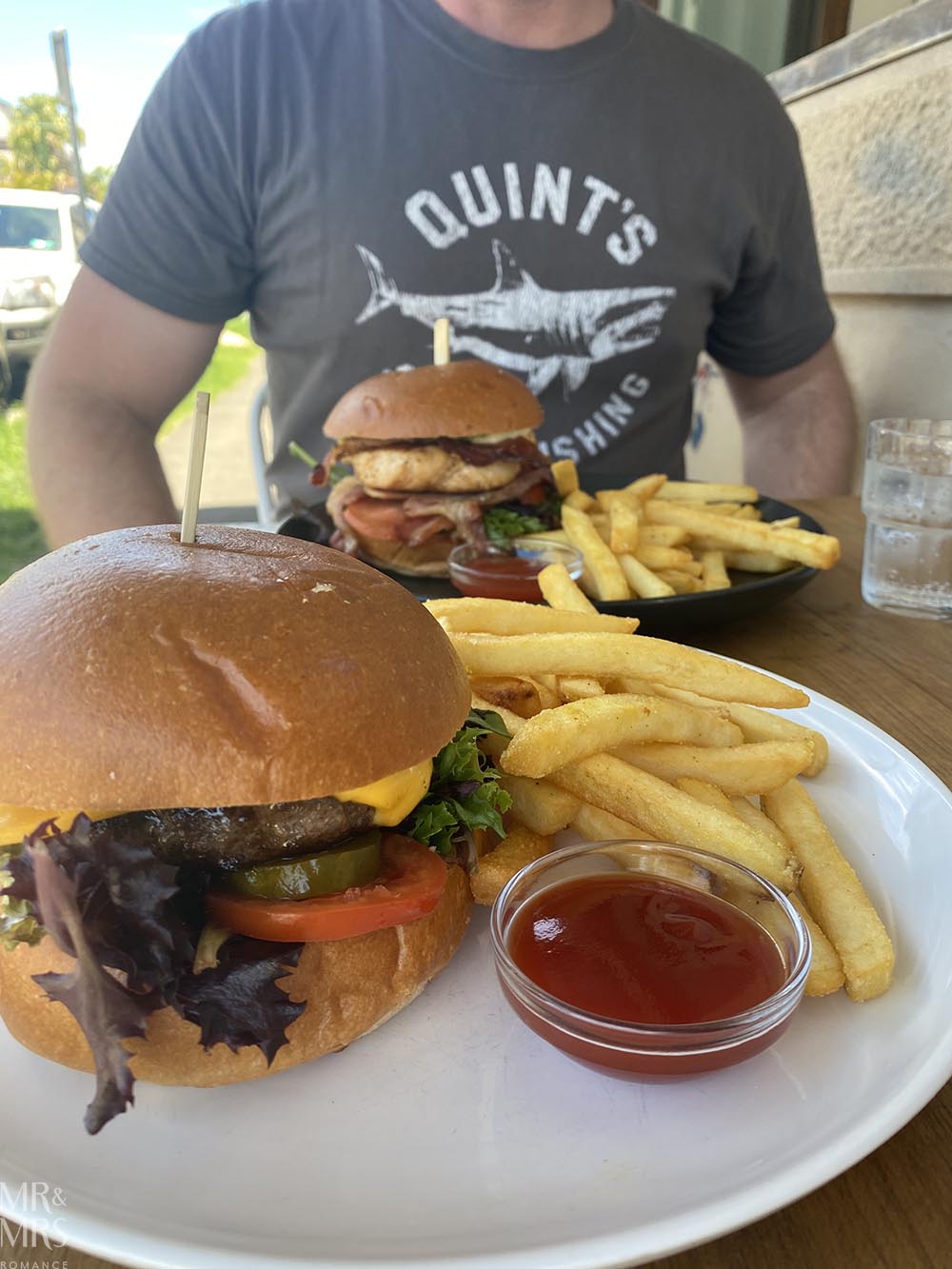 I’m relying more on Euforia’s excellent burgers, and they’re not letting me down. My grilled chicken burger (extra bacon of course) is exactly what’s needed. And Christina’s cheeseburger disappears almost as quickly.

That’s the way to get over cocktail flu. 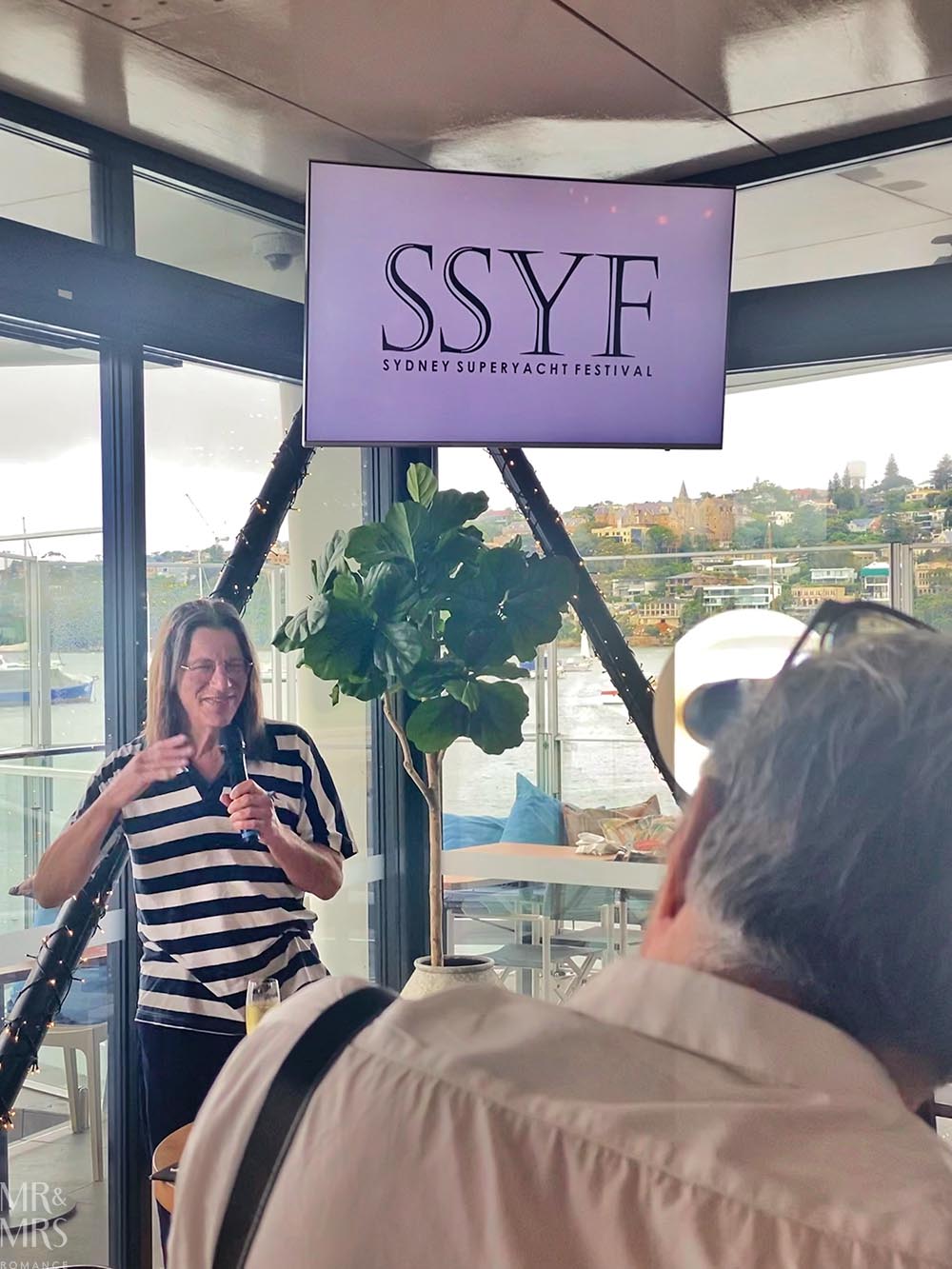 This afternoon, we’re learning about a very interesting new concept. This is the launch party for the inaugural Sydney Super Yacht Festival, ready to kick off on the first day of 2022.

Introducing it is Dr Jerry Schwartz – part owner of Sydney Sea Planes and who has also supported this festival. Indeed, this is in the Empire Lounge, the restaurant and event space of the renowned sea plane port in Rose Bay.

It’s an exciting announcement, heralding many beautiful super yachts from around Australia and the world, and encouraging much-needed tourism to our shores.

The festival runs from Jan 1-Jan 6, and it’s not just super yacht owners who will be able to enjoy the festivities.

Along with events and entertainment at the Sofitel Sydney Darling Harbour, there are gourmet picnics on Shark Island planned, a party catamaran with a floating pool that people can cruise around the harbour, and cocktails and functions to enjoy at the Empire Lounge here in Rose Bay too.

It should be a lot of fun, so keep your eye open for announcements. 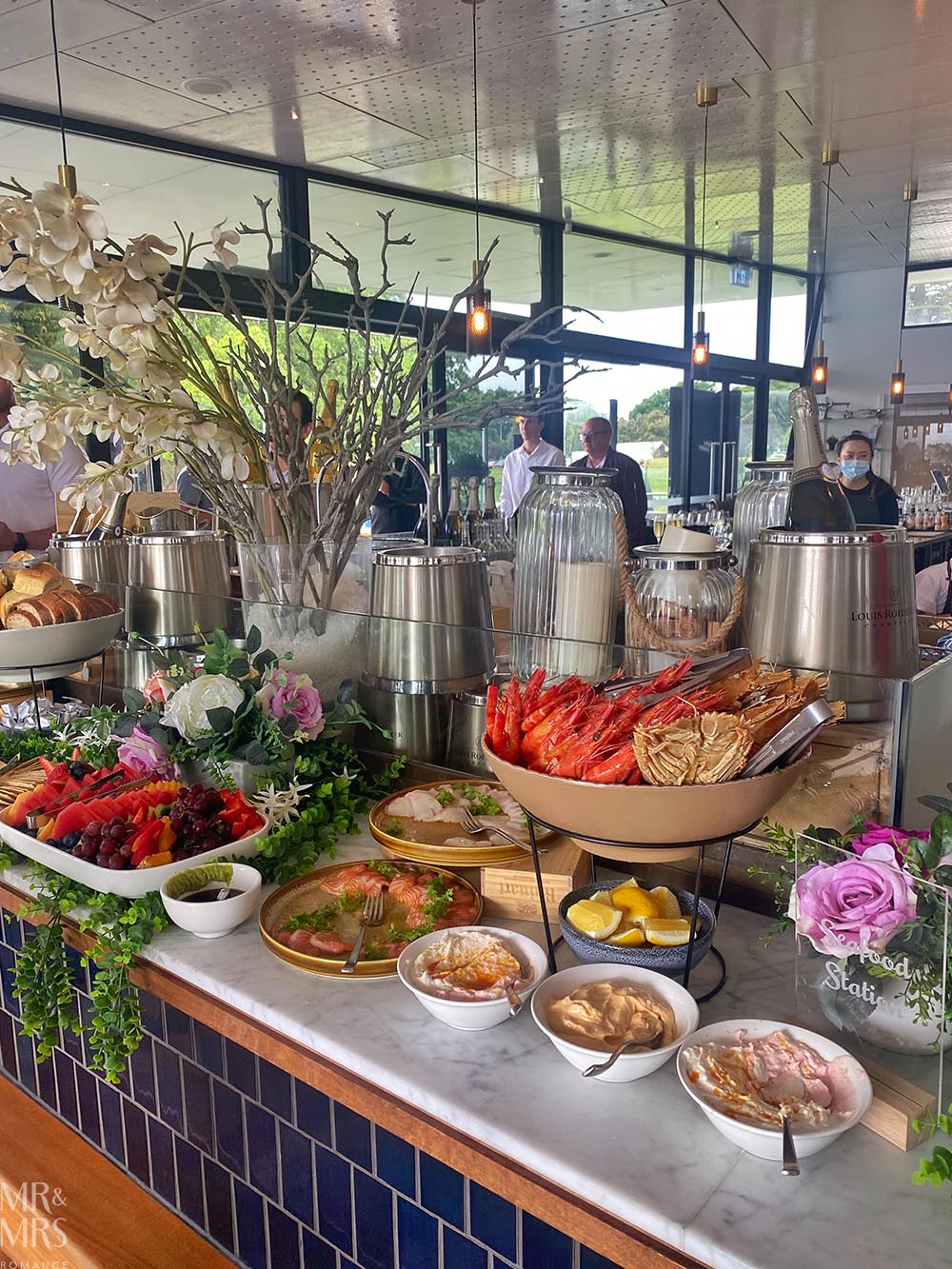 The last time we were in the Empire Lounge it was to take a flight on one of the sea planes that dock here – you can watch our video of the flight here – so it’s lovely to be back for some of the delicious food they serve! 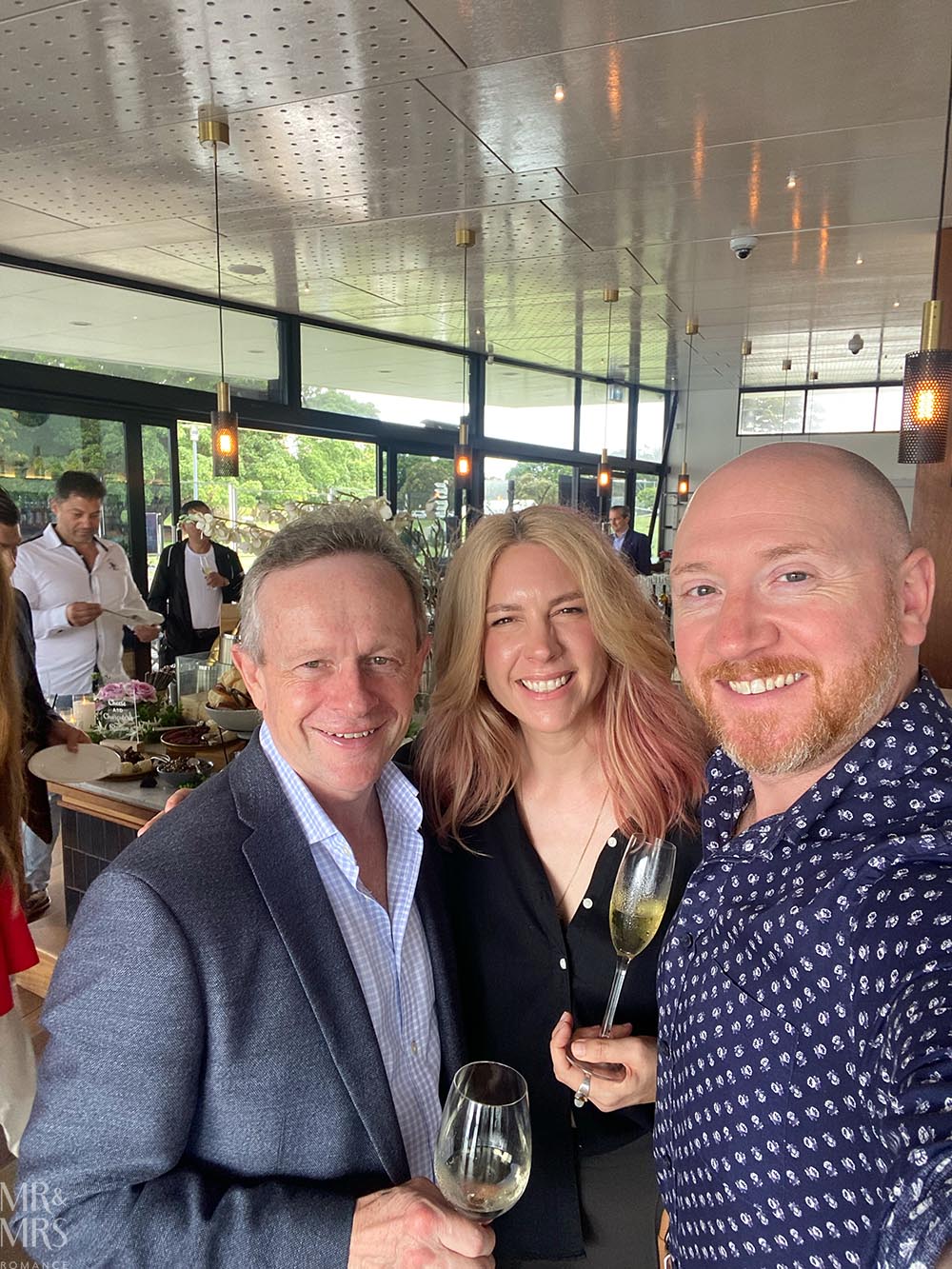 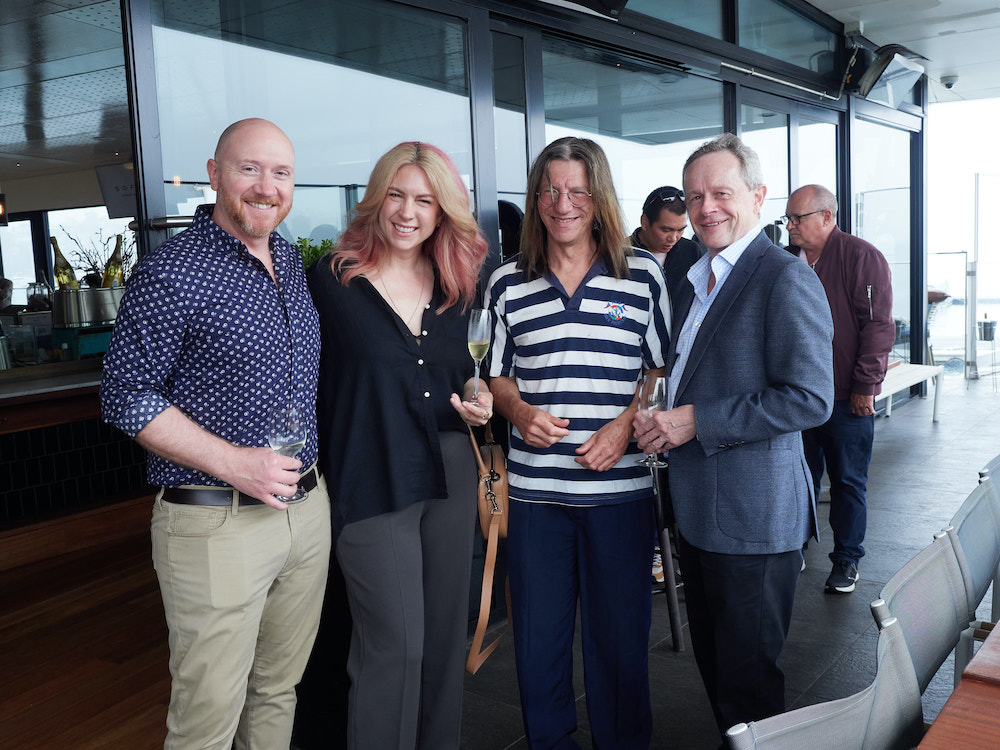 But apart from the exciting news and being at this amazing location, easily the highlight of our afternoon is catching up with our superb friend Peter Hook.

Peter, who also works with Dr Jerry Schwartz, tells us that Jerry and his friend – another doctor – are ready to launch their whiskey. It’s a project that’s been in the mix for some six years now, so it’s great that the whiskey, which they’ve aptly named The Two Doctors, is up and running.

In fact, the Fairmont Resort and Spa in the Blue Mountains (which Dr Schwartz owns too by the way) is home to the new Two Doctors Whiskey Tavern, and we’ll be heading up there to check out the hotel and bar in a couple of weeks! We’ll keep you posted. 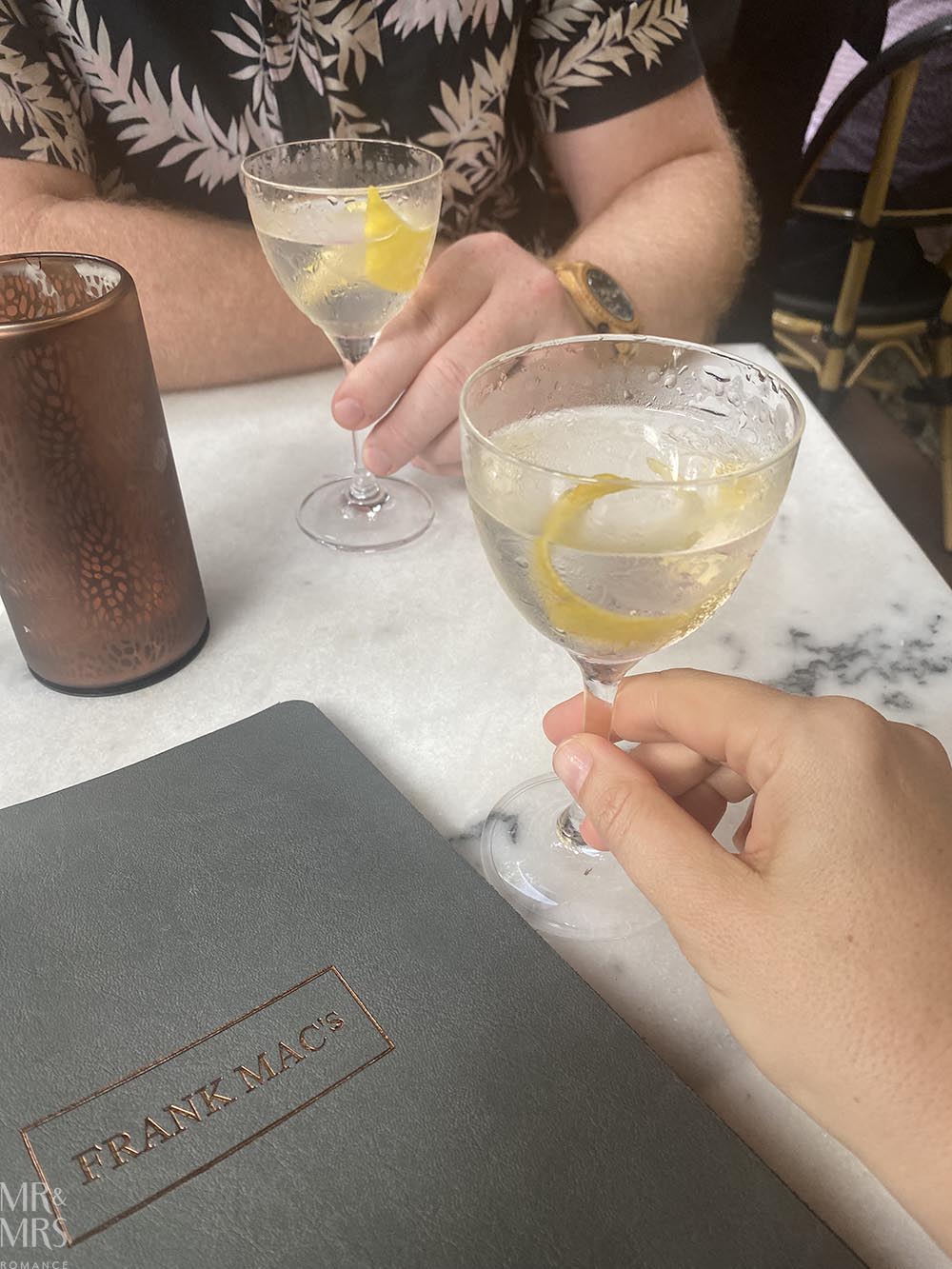 Tonight we’re out for another launch party, this time in the Rocks. We’re running early though so Christina and I pop into Frank Mac’s to check out their martini menu.

They have a great range of gins here – lots of Aussie one too, which is great to see. We do get caught in the paradox of choice though and end up ordering the same gin from the Prohibition Gin Co. Still, it’s an excellent martini.

And it means I don’t have to share any! 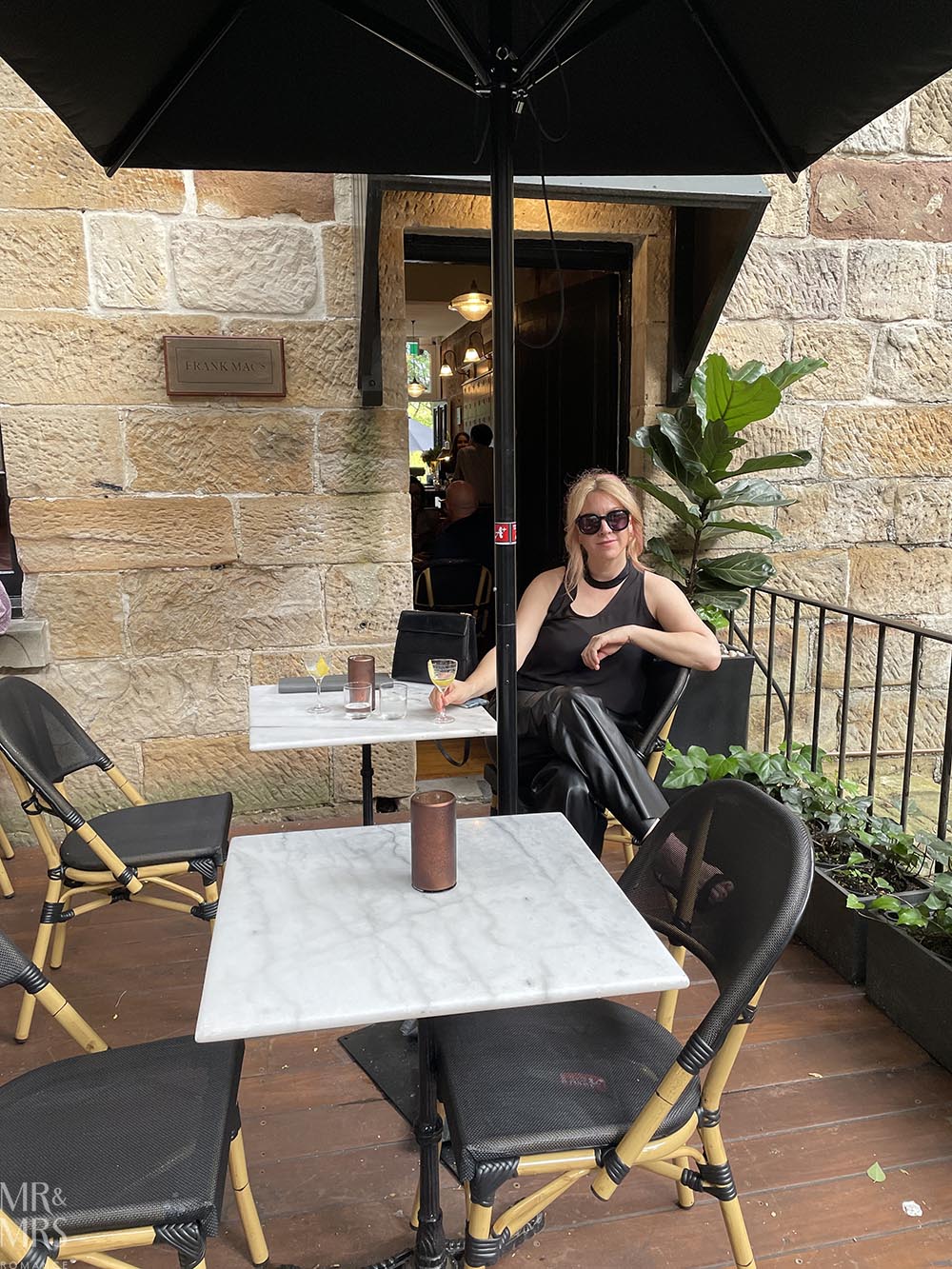 The wonderful thing about bars in the Rocks is the atmosphere this old architecture brings. The sandstone-walled courtyard here makes for a lovely setting. We’ll definitely be back.

But for now, we have a new distillery to explore… 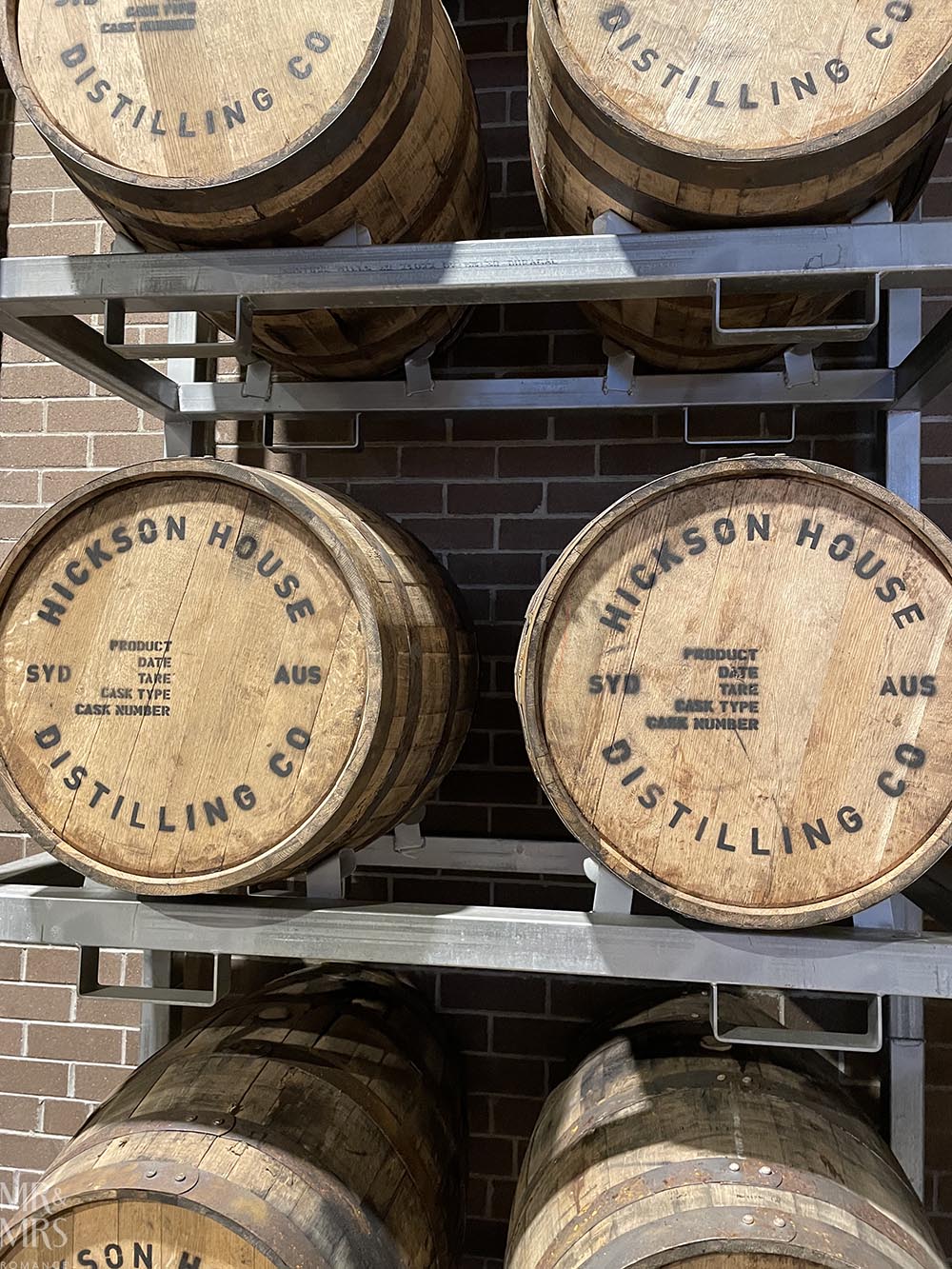 After all the terrible delays that Covid has brought, it’s so good to see Hickson House finally get up and running. This place was supposed to open about a year ago, but we’re really glad to see the pandemic didn’t stopped it completely. 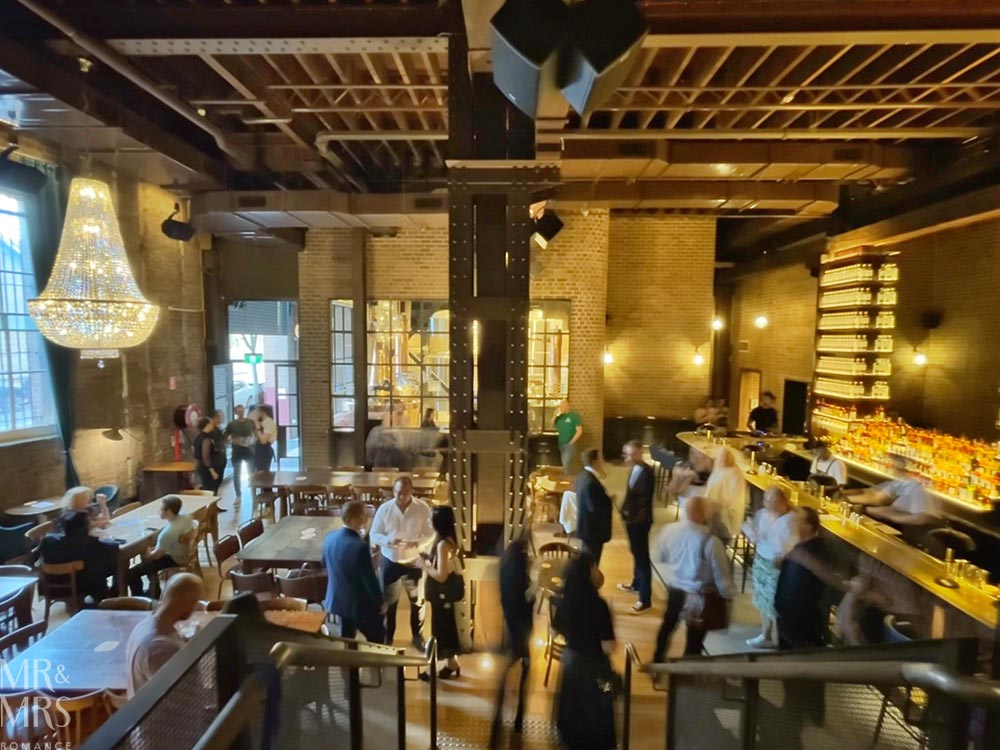 This beautiful space on Hickson Street in the Rocks is home to its new eponymous gin label and also a whisky that will be with us as soon as it’s finished its mandatory two years in barrels.

Hickson House is the brainchild of the absolute gentleman and Australian hospitality figurehead Mikey Enright, who also owns the award-winning gin bar The Barber Shop in the city and that slice of England, the Duke of Clarence pub next door. 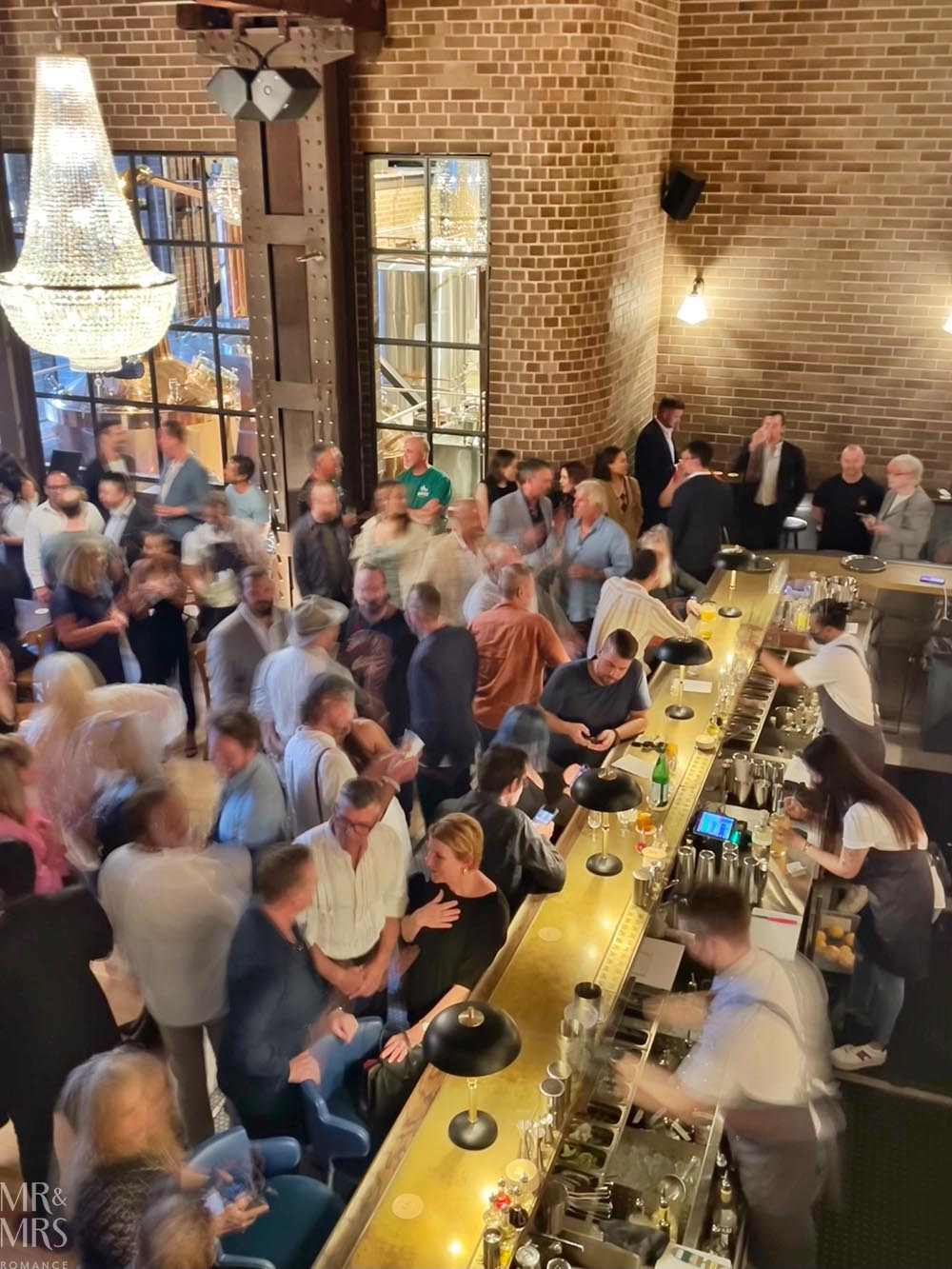 The party really gets going and we soon see how this place will be when it officially opens on December 7th!

From the stairs up to the cosy mezzanine bar, the view over the venue gives you a real sense of the space. Surely this will be one of the coolest bars in Sydney. Especially with what’s through the windows on the far side. 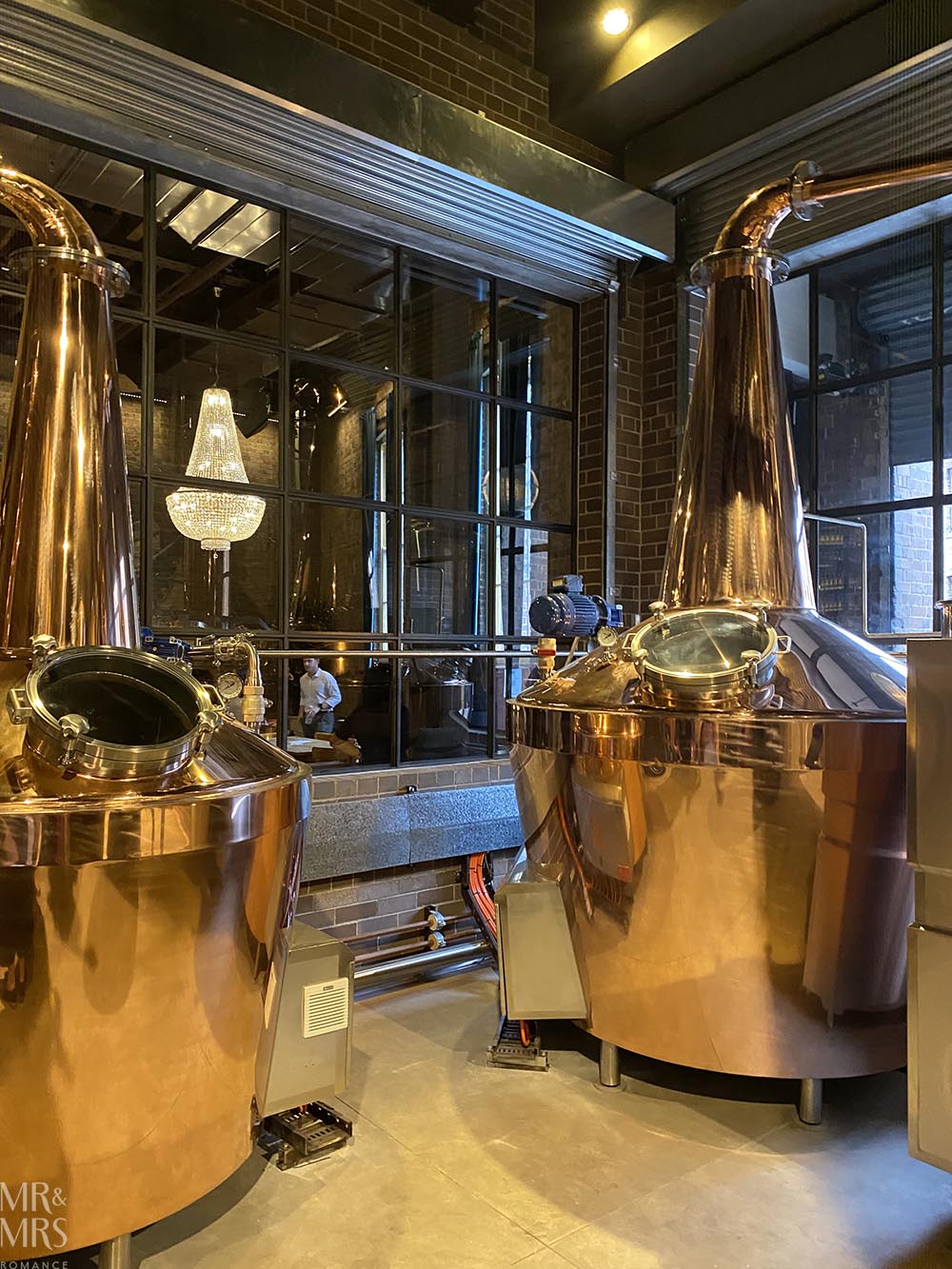 Truly the heart of the venue, the stunning copper stills of Hickson House Distillery glow through the windows into the bar. It’s wonderful that people in the city will be able to drink the gin (and eventually whisky) that’s made right here.

There will also be tours of the distillery customers can do, bringing a better understanding of how spirits are made. Mind you, I’ve been on so many distillery tours and it still confounds me how it all works. 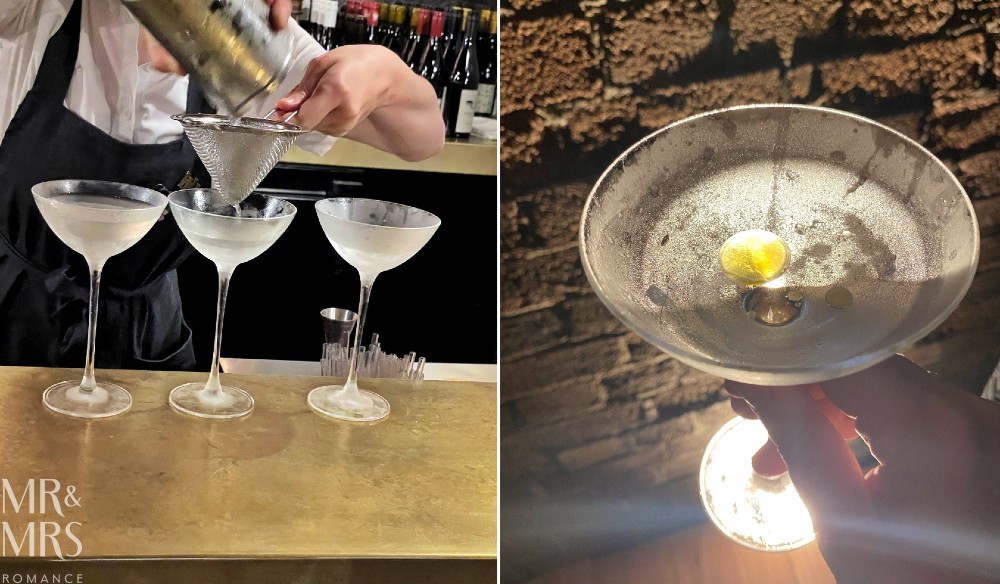 There really isn’t a better cocktail than a well-made martini. And these martinis are better than just well-made. The Hickson House Distillery London dry is lovely, and the garnish of a couple of drops of lemon myrtle oil reduction sets everything into balance in this drink. 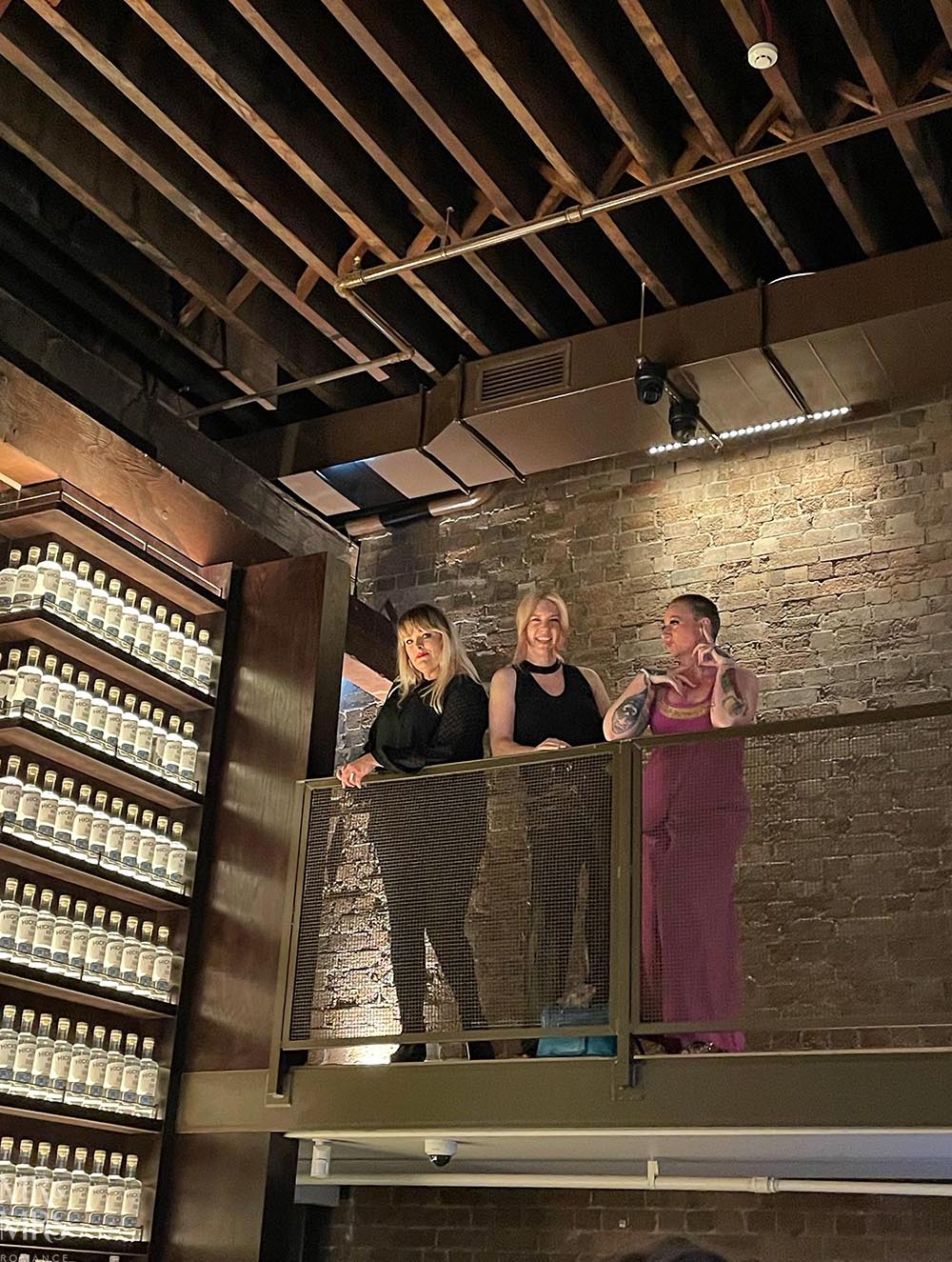 On the left is Kathleen Davies owner and founder of Nip of Courage, a wholesaler, supplier and educator in Aussie craft spirits (you can check out the extensive range of what’s distilled by hand in this country here).

In the middle is – as I’m sure you know – the beautiful Christina aka Mrs Romance.

And on the right is Abby Roennfeldt aka Just Abby. Not only is Abby the Nip of Courage national brand ambassador, she also owns and runs her own bar in Adelaide Hades Hula House. So this launch is in everyone’s wheelhouse! 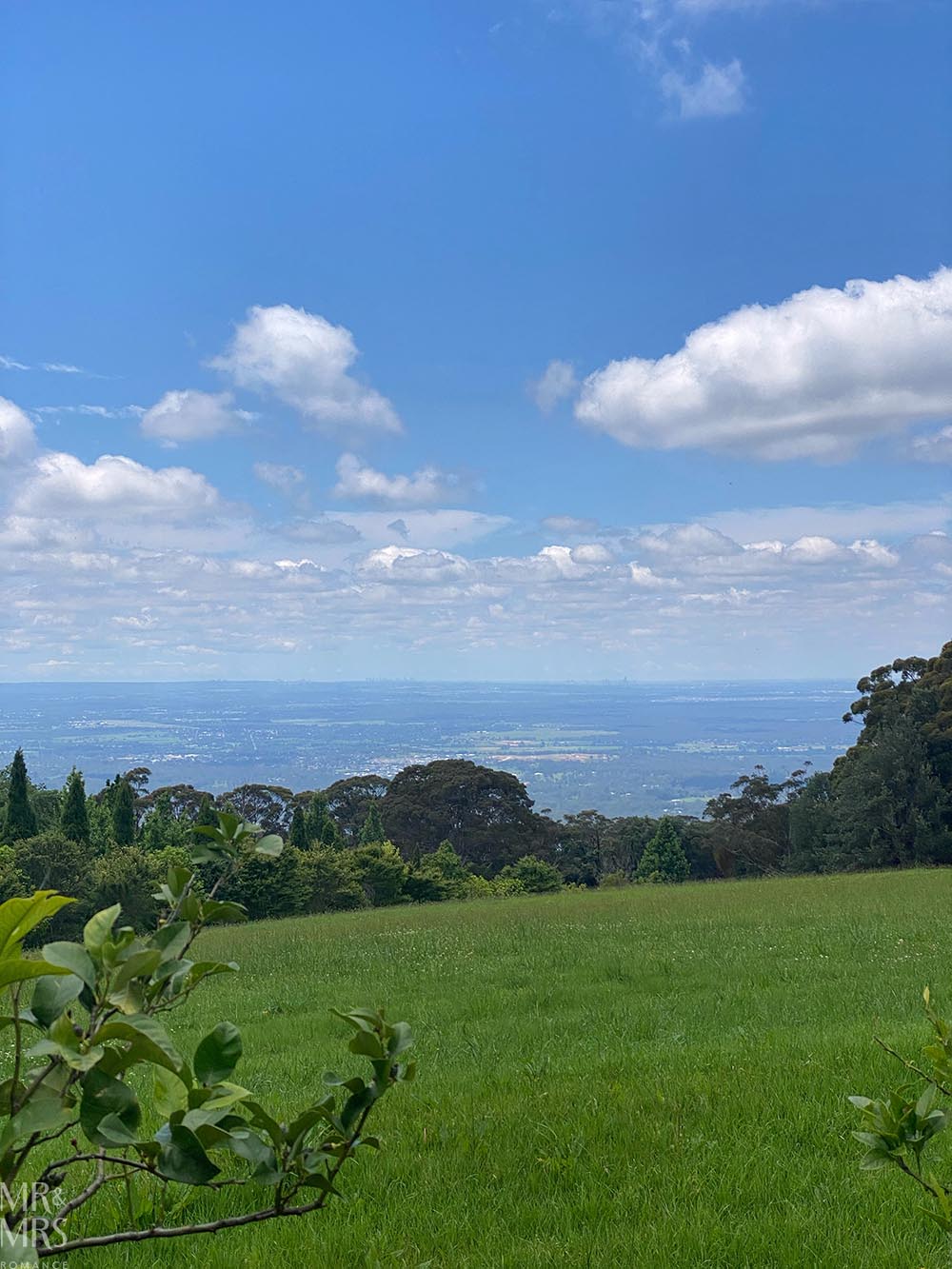 Today we’re hanging out with Kathleen and Abby again, and taking a trip up into the mountains.

This is the view from our host Lee Etherington’s place. From here you can see all the way down to the city. You can even see north as far as the Hunter Valley and south as far as Wollongong. Quite incredible.

But we’re not here for the vistas.

Lee is the owner and founder of Wild Hibiscus Distilling Co – so called because, well, you know those jars of hibiscus flowers you can put in Champagne? Lee started that.

But we’re not here for flowers either. 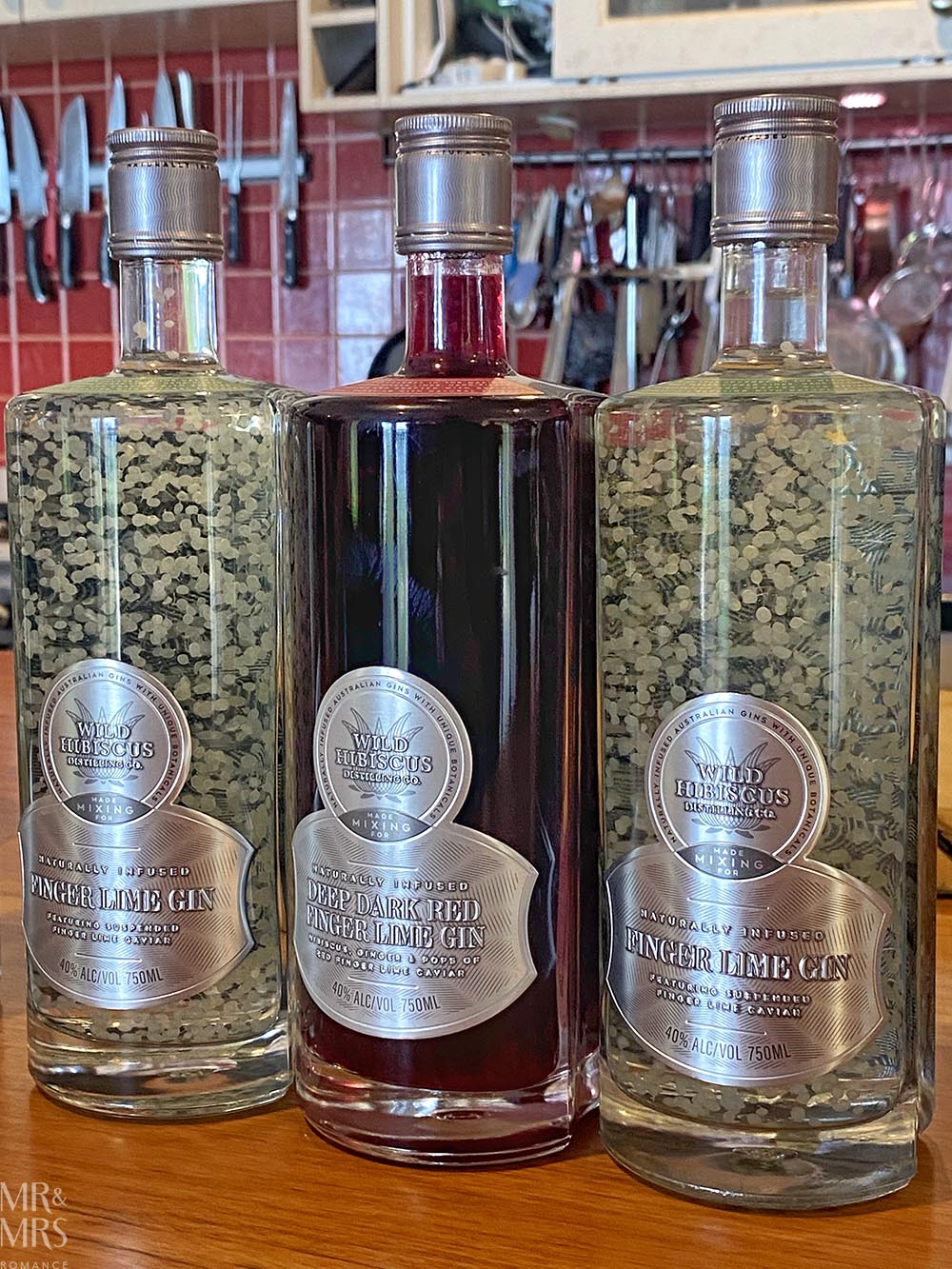 Lee has spent literally years (10 in fact!) developing this product, and it not only shows, it’s absolutely been worth it.

These gins have harnessed the flavours of the finger limes that Lee grows himself to create something very unique. He has engineered a way to naturally suspend the finger lime fruit in the gin without it all settling to the bottom of the bottle.

If you don’t know, finger limes are a native fruit that look a bit like fingers. Inside each fruit are hundreds of little balls that look like green caviar, and each one is bursting with juice that tastes just like lime. 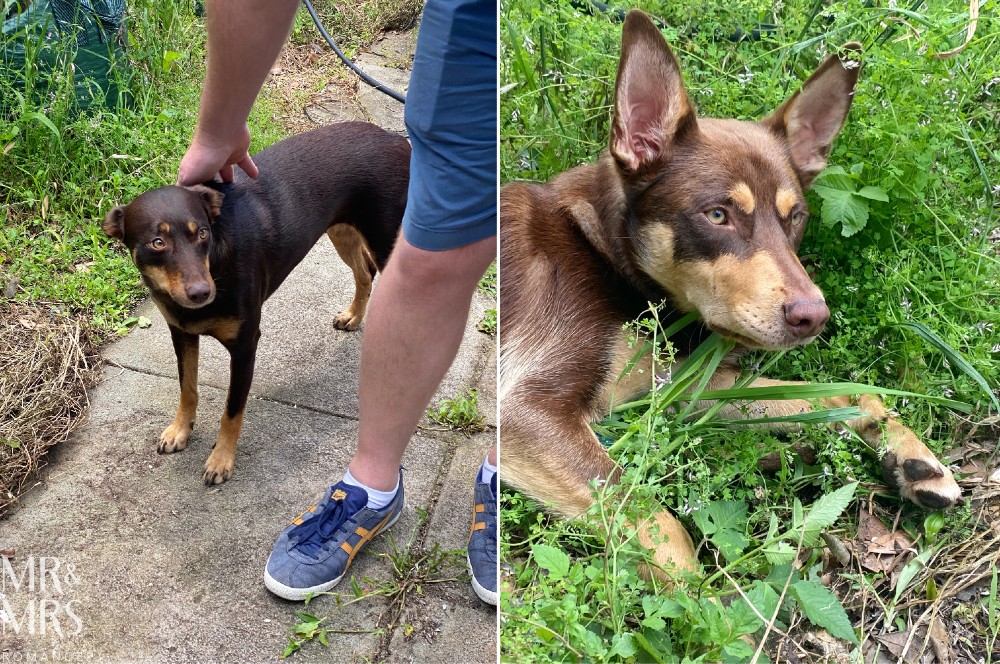 We’re kept company during our visit to Lee’s farm by these two little gems. On the left is Toker and on the right is Snoop – so called because he’s only got three toes on each foot and it looks like he’s doing the westside sign all the time! 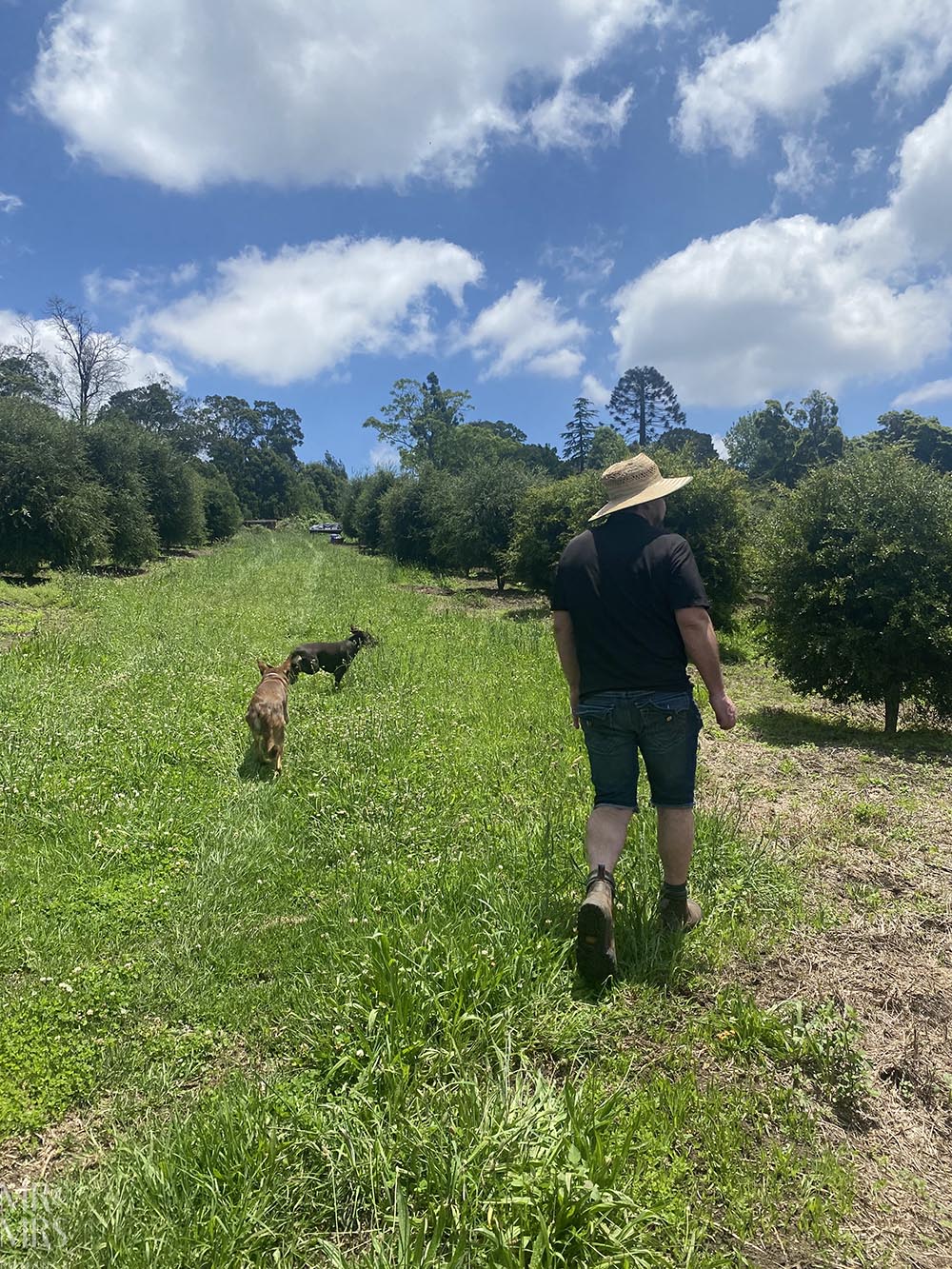 After a bit of a chat about how Lee came to be a distiller, how he developed his gin and how he grows his finger limes, we take a walk around his farm.

We’ve never seen a finger lime on its tree before, so we all pretty excited. 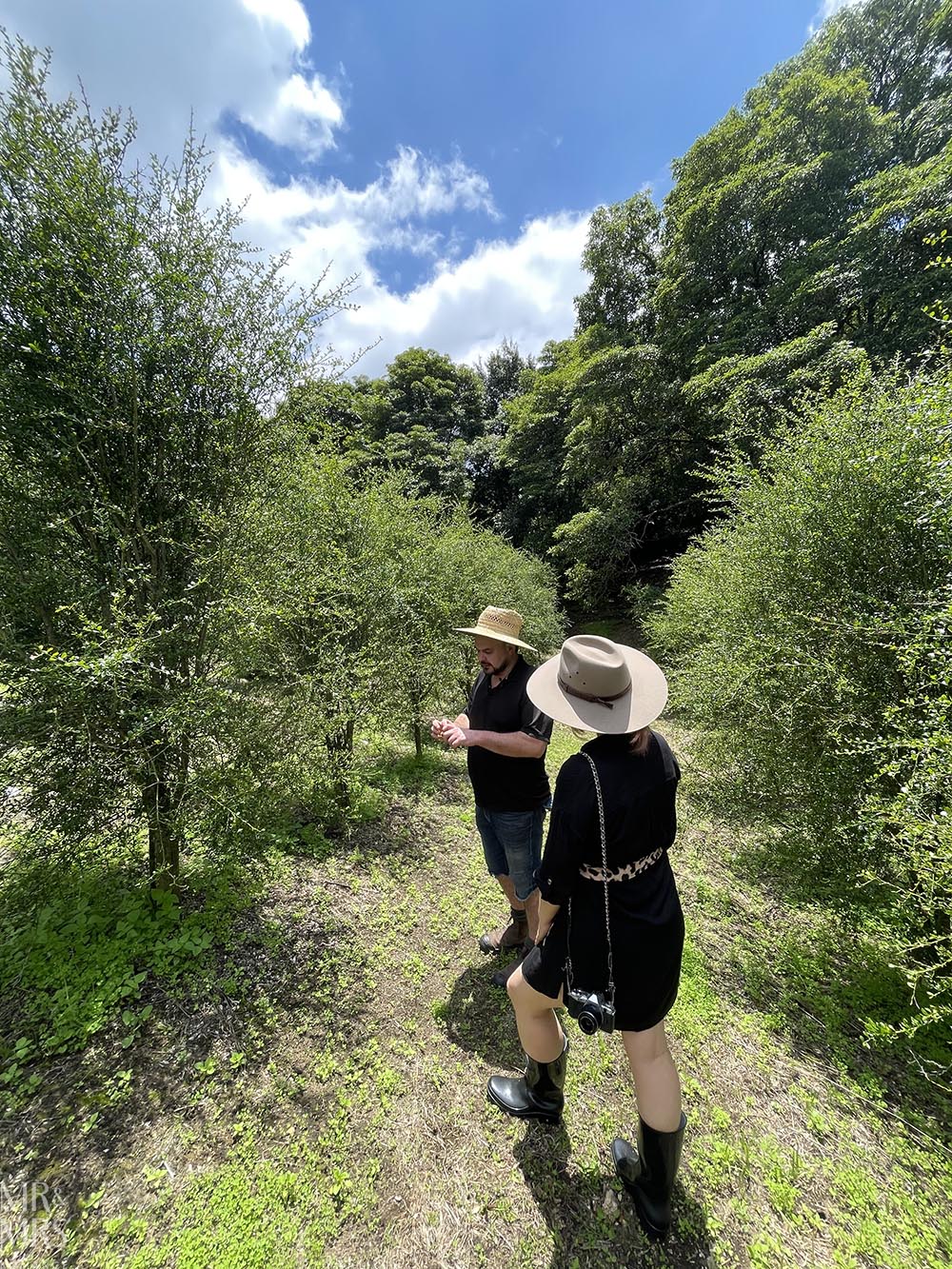 Christina and Lee chat about the growing cycle and harvesting process of finger lime trees – it sounds like a lot of hard work farming these things to be honest. Think I’ll stick with succulents. 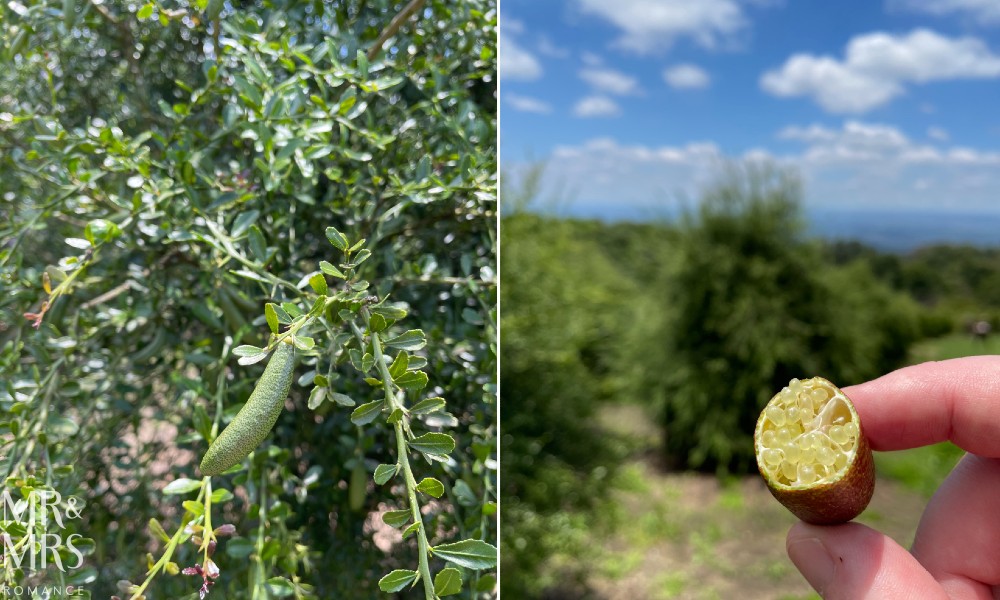 You can see how these things look a bit like fingers (they get a lot fatter as they ripen) and why they’re also known as caviar lime. Those little balls are packed with citrus flavoured juice. 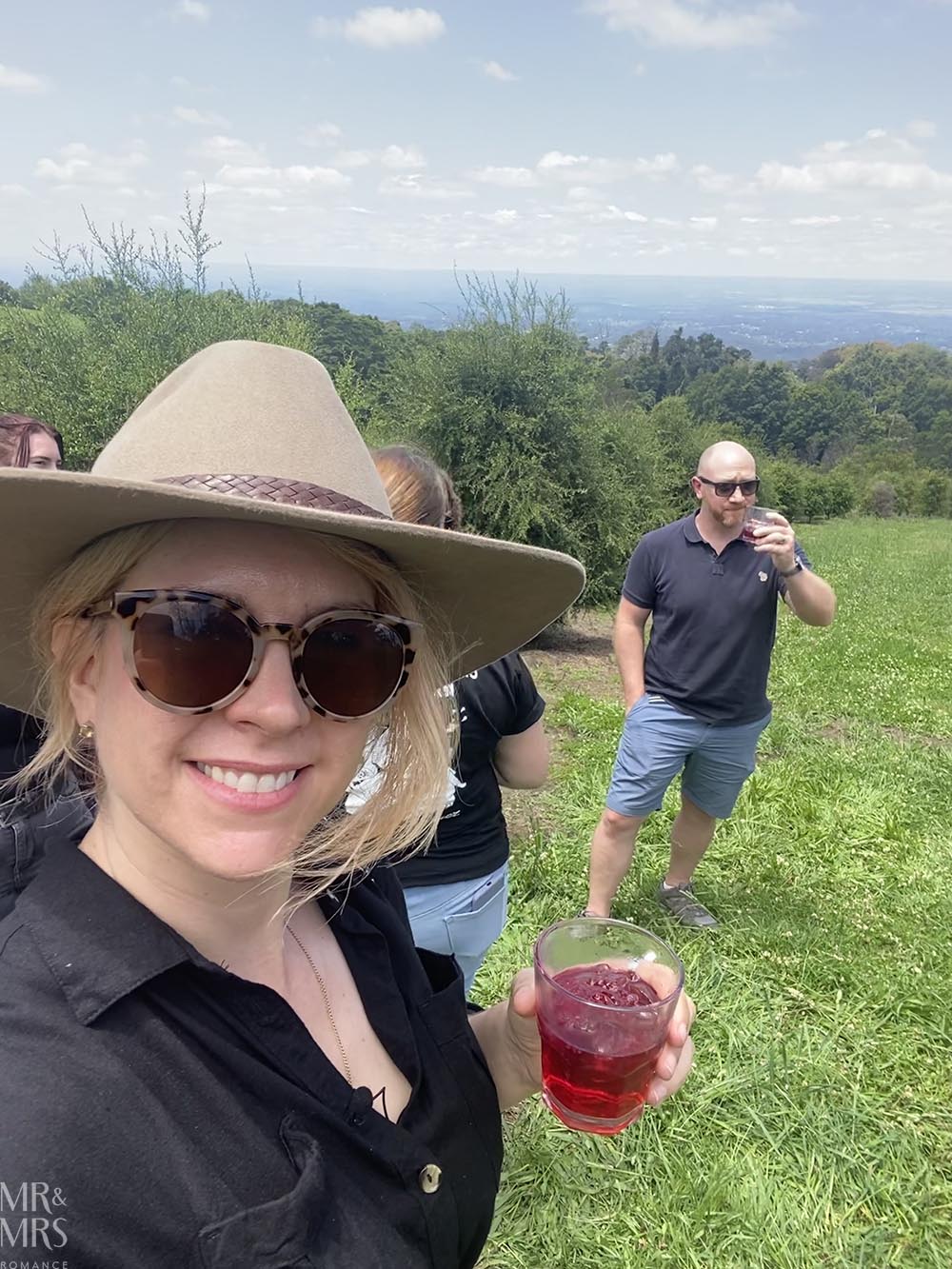 We explore the finger lime orchard for a while to learn more about the process. Lee rewards our hard work with a drink amongst the trees. This red gin is made with the red finger limes that Lee also grows. There’s no artificial colouring or anything in this drink, just finger limes and the botanicals he uses to make the gin.

What’s more, the finger lime fruit – both the red and the original – is ‘filled’ with a different gin to the one the caviar is sitting in. Essentially you’re getting two gins for the price of one! 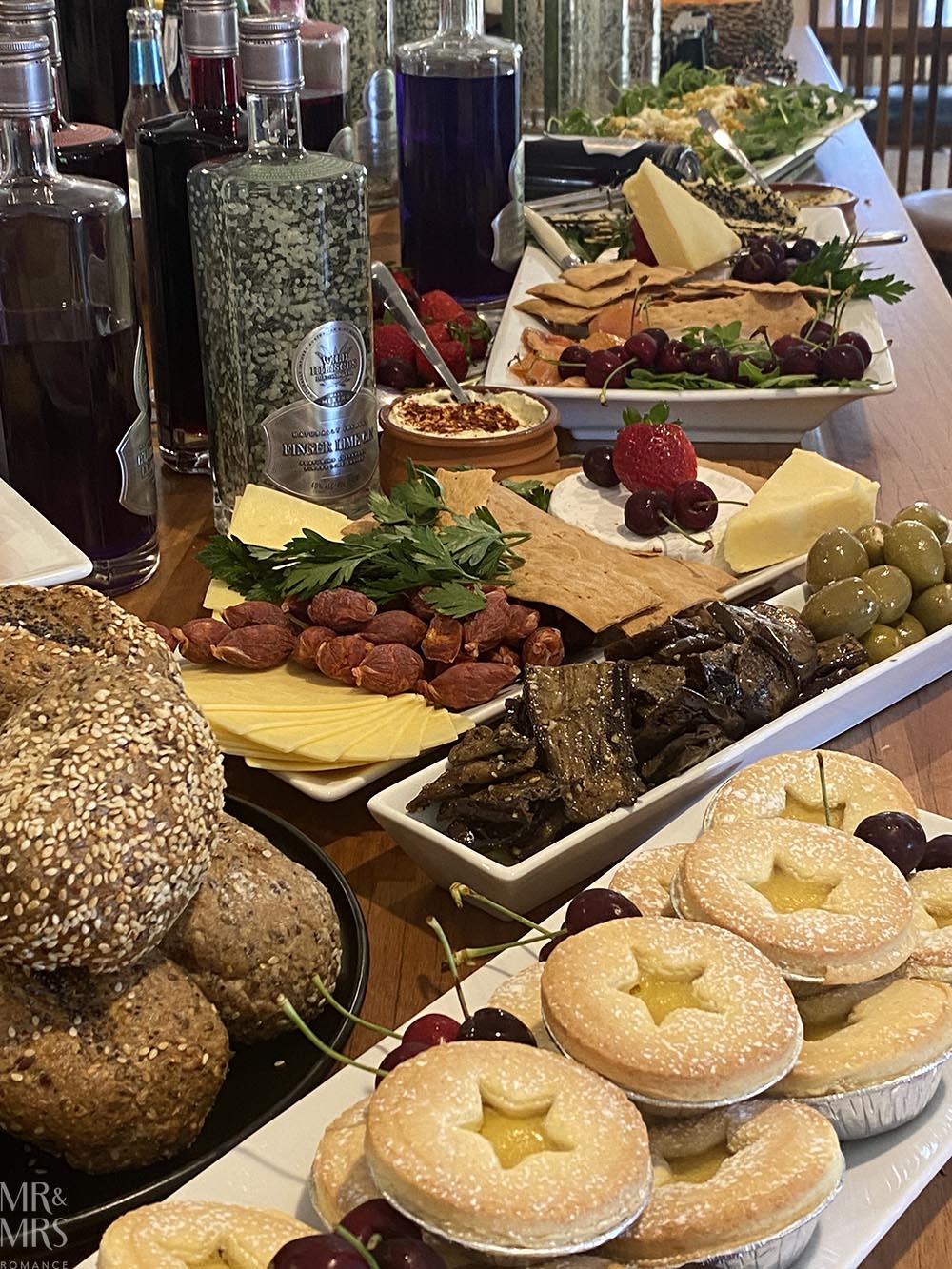 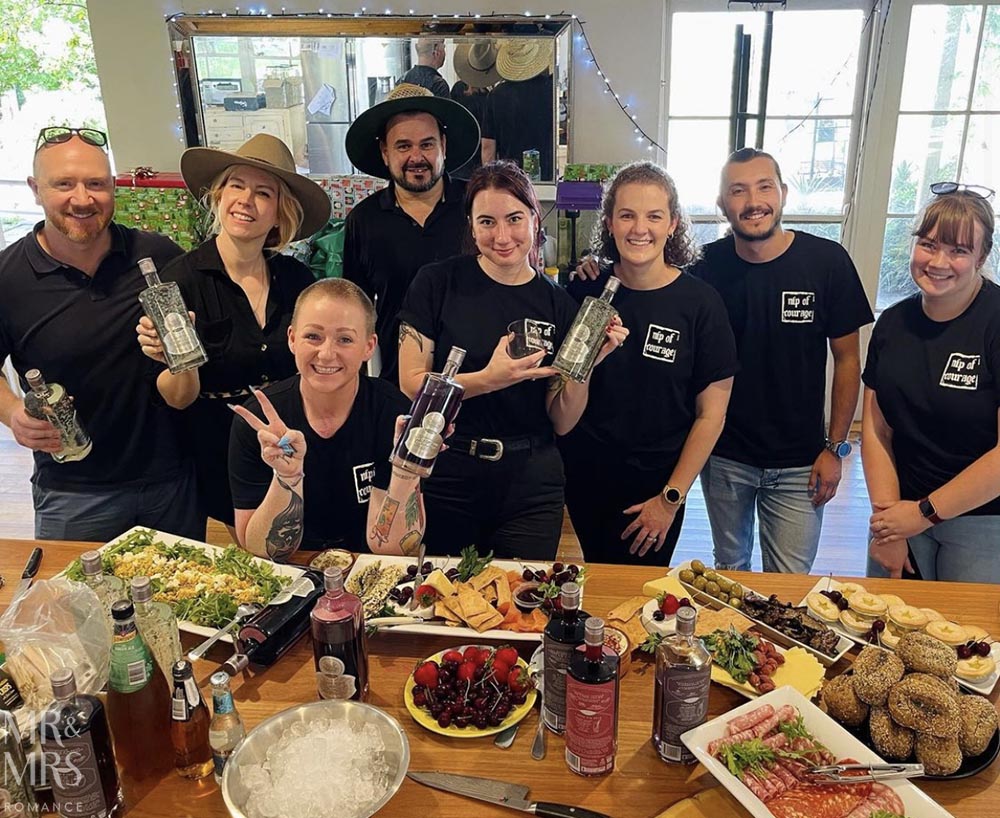 We head back to Lee’s homestead for a bite to eat (and maybe another G&T!). It’s been so interesting speaking to him about his product and how it’s made. We’ll definitely be talking more about this one soon.

It’s also been a lot of fun to be out on this field trip with the rest of the Nip of Courage crew! So good to be working with these guys.

Christina and I have been writing and photographing stories for NoC all this year and we’re excited to continue doing so into the future. Check out some of our stories here. 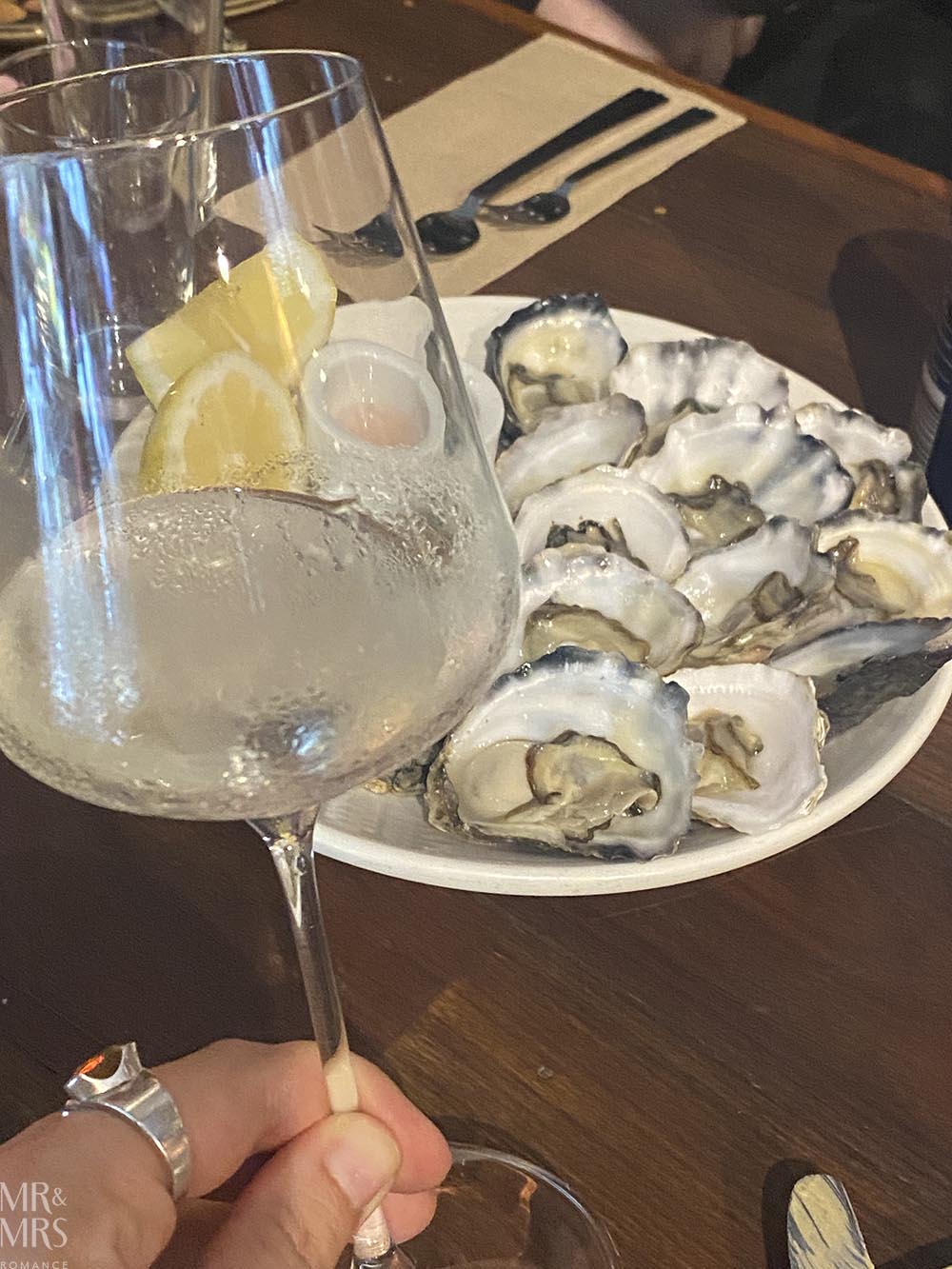 We all head back to the city for a Superman-style quick change and then it’s on to the Nip of Courage Christmas party.

We’re at P&V Merchants in Paddington – ostensibly a bottle shop, but in all honesty much more than that. Yes, you can find plenty of great beers, wines and spirits here, but when you have a seat, all the good food comes out too!

These oysters are in fact indigenous to Australia by the way – all others, even the Sydney rock oyster, are introduced. These guys are endemic. And delicious! 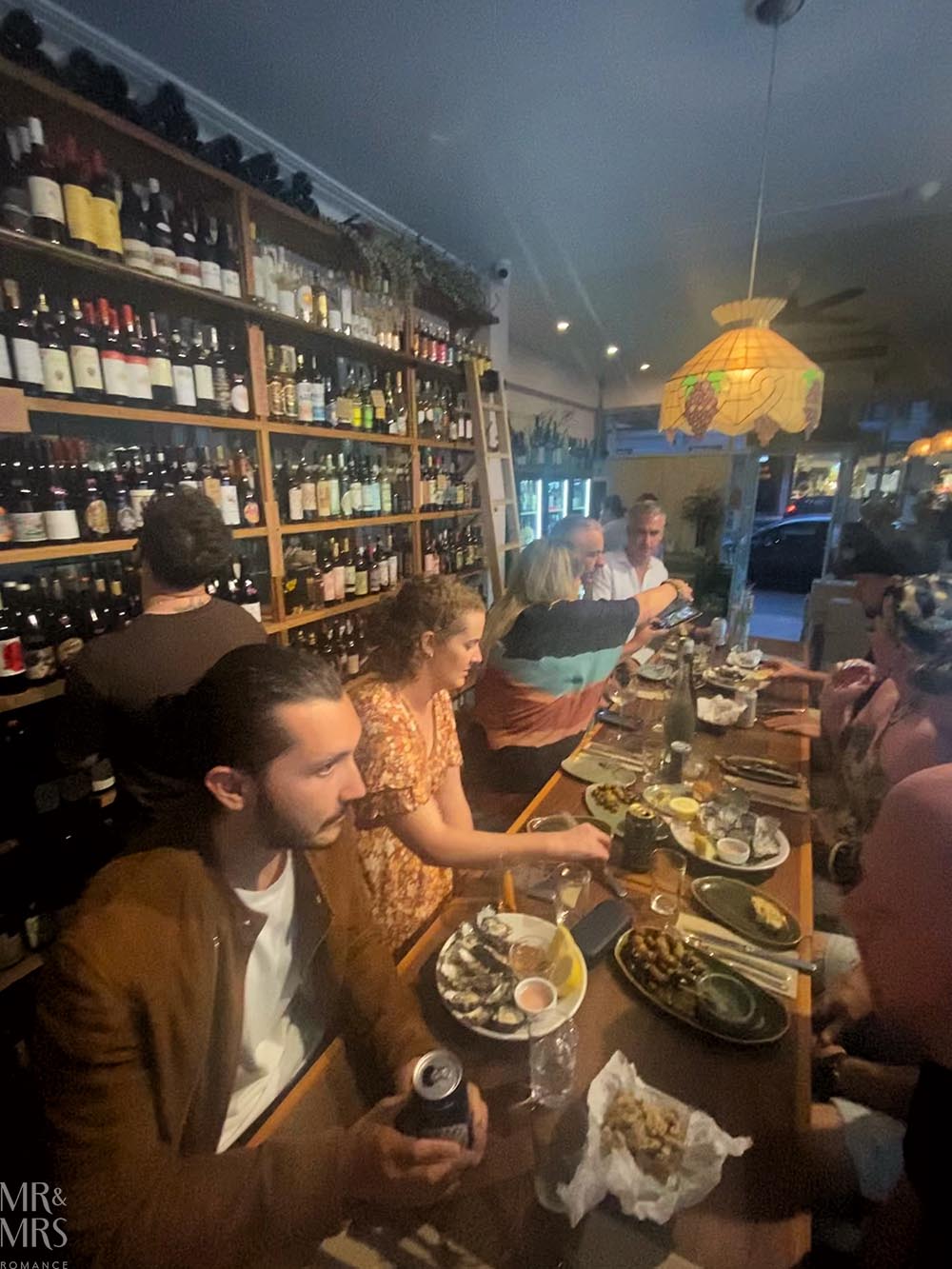 It feels quite cool to be sat in a bottle shop enjoying a delicious meal at a banquet table.

The food, drinks, conversation and energy of tonight has all been absolutely brilliant. We thought we’d be too tired to make the most of this evening after such a busy week and an even busier day at the farm, but everyone’s on fire. 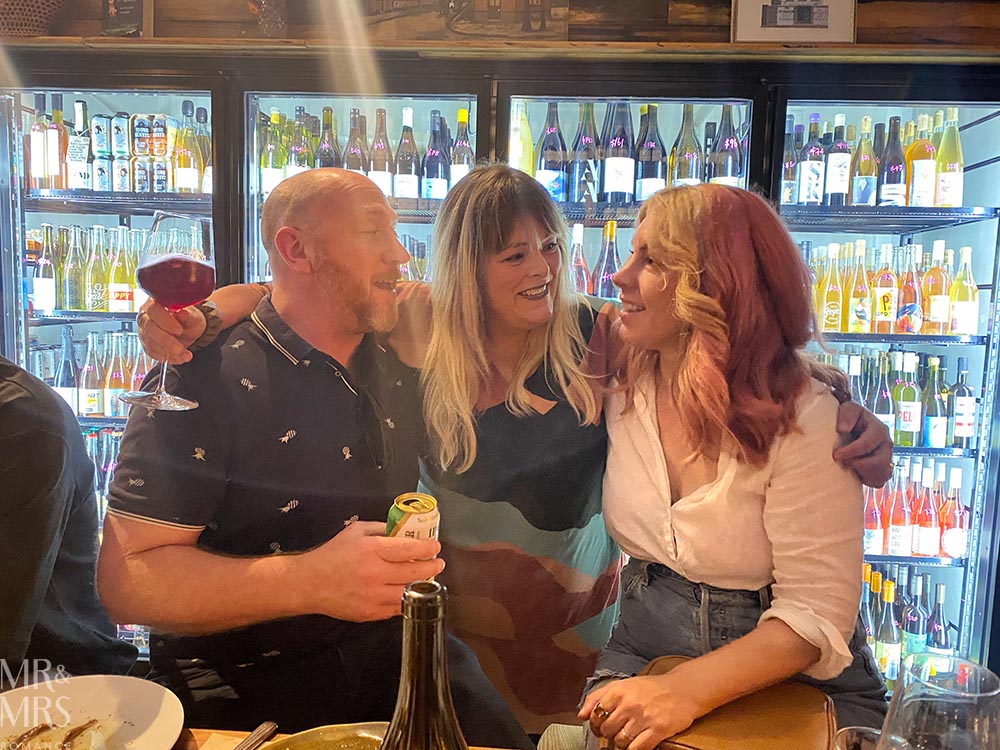 Our mate Kath is one in a million.

Fly away to Byron Bay

This past week has been far from ordinary for us. And what a way to celebrate the end of July too! We spent the latter…