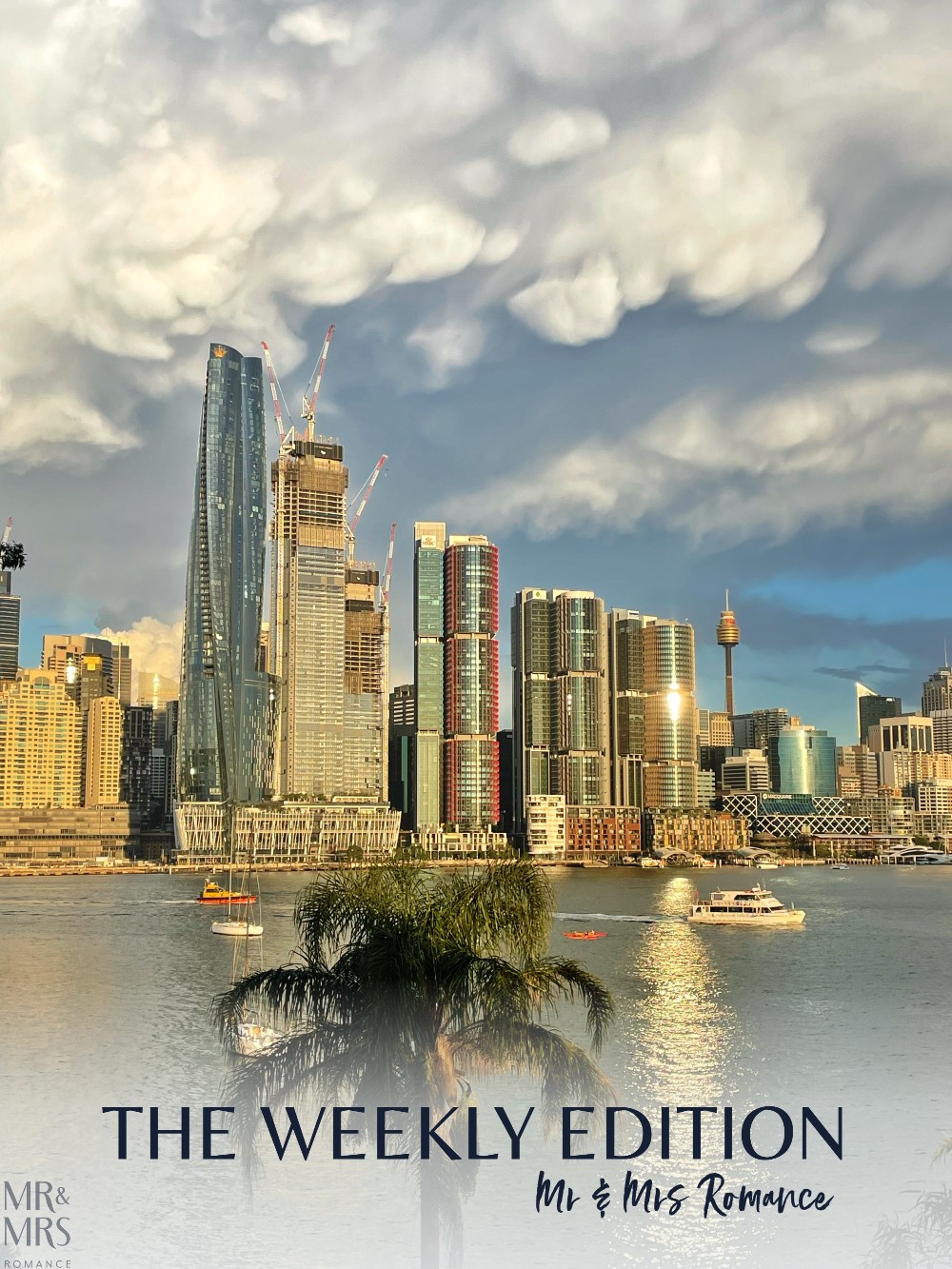 It’s hard to believe it’ll be two and a half years since Christina and I travelled internationally, but at long last we’re heading yonder into the big blue at the end of the month.

And even though I managed a quick trip back to the UK for my dad’s birthday in May, it was a far cry from what we usually get up to. So watch this space for deets on where we’re going and what we get up to.

In this Edition, we’re talking the Rugby World Cup 2023 in France and the premier travel event of the year, the launch of Sydney’s Italian film festival and our night with Billie Eilish!

We hope you enjoy this Edition. 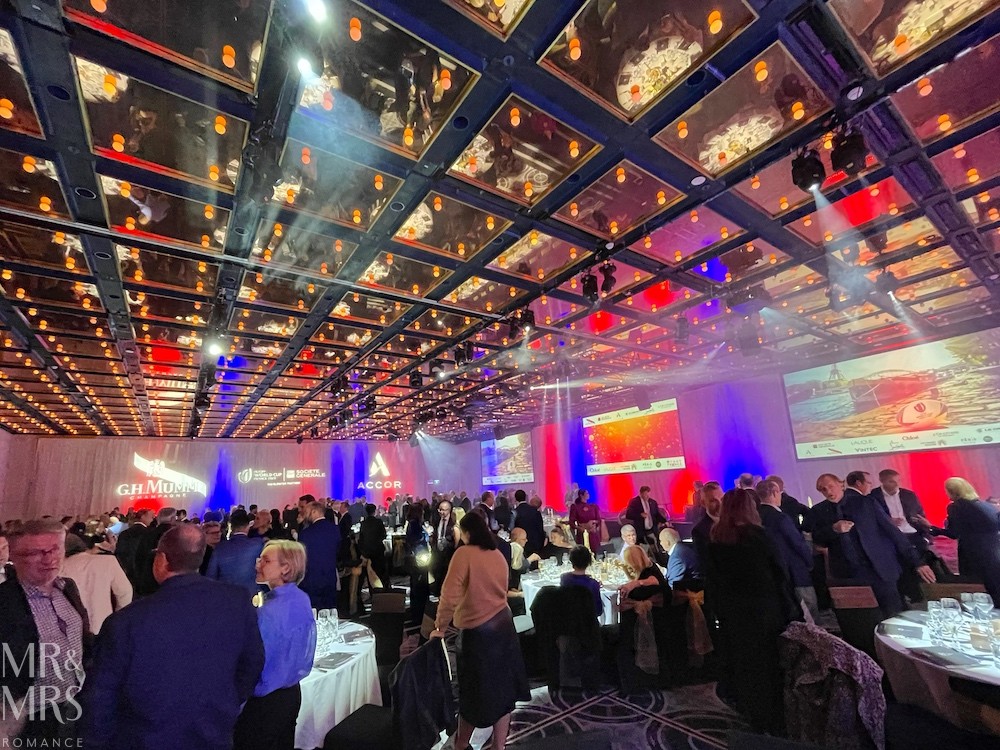 This evening, Christina and I are celebrating the coming Rugby World Cup in France next year with a soiree at the ballroom of Sydney’s Sofitel Wentworth with over 350 other guests.

It’s an extravagant party of French flair and hospitality, with Mumm Champagne flowing freely, and several Wallaby and Les Bleus legends in the crowd.

The funny thing is Christina and I are at different tables on the other side of the room to each other!

I’m at the table of the fascinating Christine Gee, who not only represents the beautiful Guest Apartment Suites on Ile Saint-Louis in Paris, but just finished the biography of her late husband, the author Bryce Courtney.

Christina is sitting with her friends from Accor Hotels, one of the major sponsors of the 2023 Rugby World Cup and a French icon in itself. 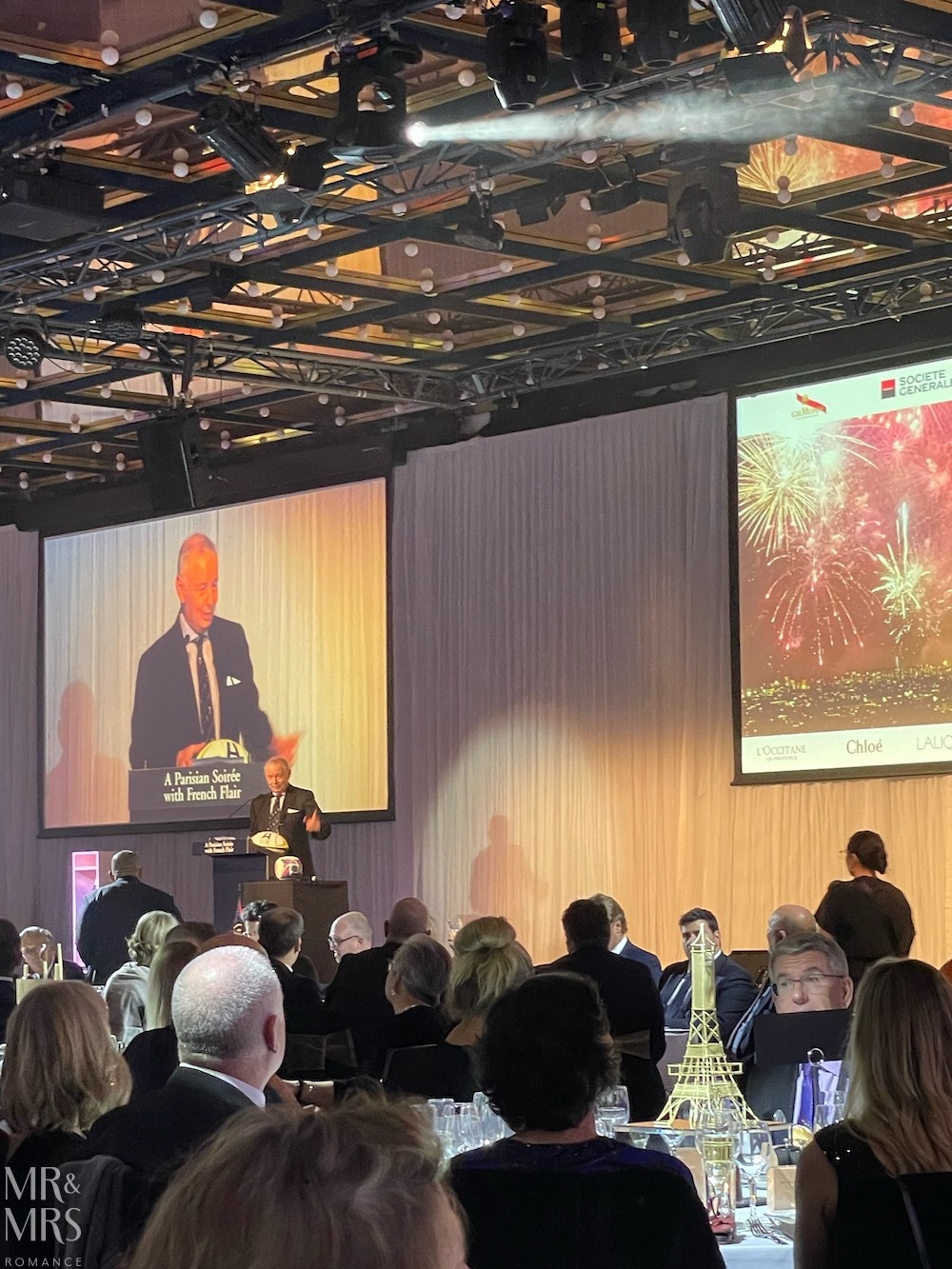 This is the biggest and most illustrious travel event of the whole year. My table has some incredible writing and PR talent seated at it. The likes of John Borthwick, Jane Corbett Jones, Mike Gebicki, Jana Frawley and Christine McCabe stand tall in the travel industry.

We also hear from a range of speakers like the very entertaining Patrick Benhamou (pictured), the director of Atout France Australia—the main tourism body of France—Wallaby star Mat Giteau and Eric Jeunemaitre, president of the Paris Region Tourism Board. 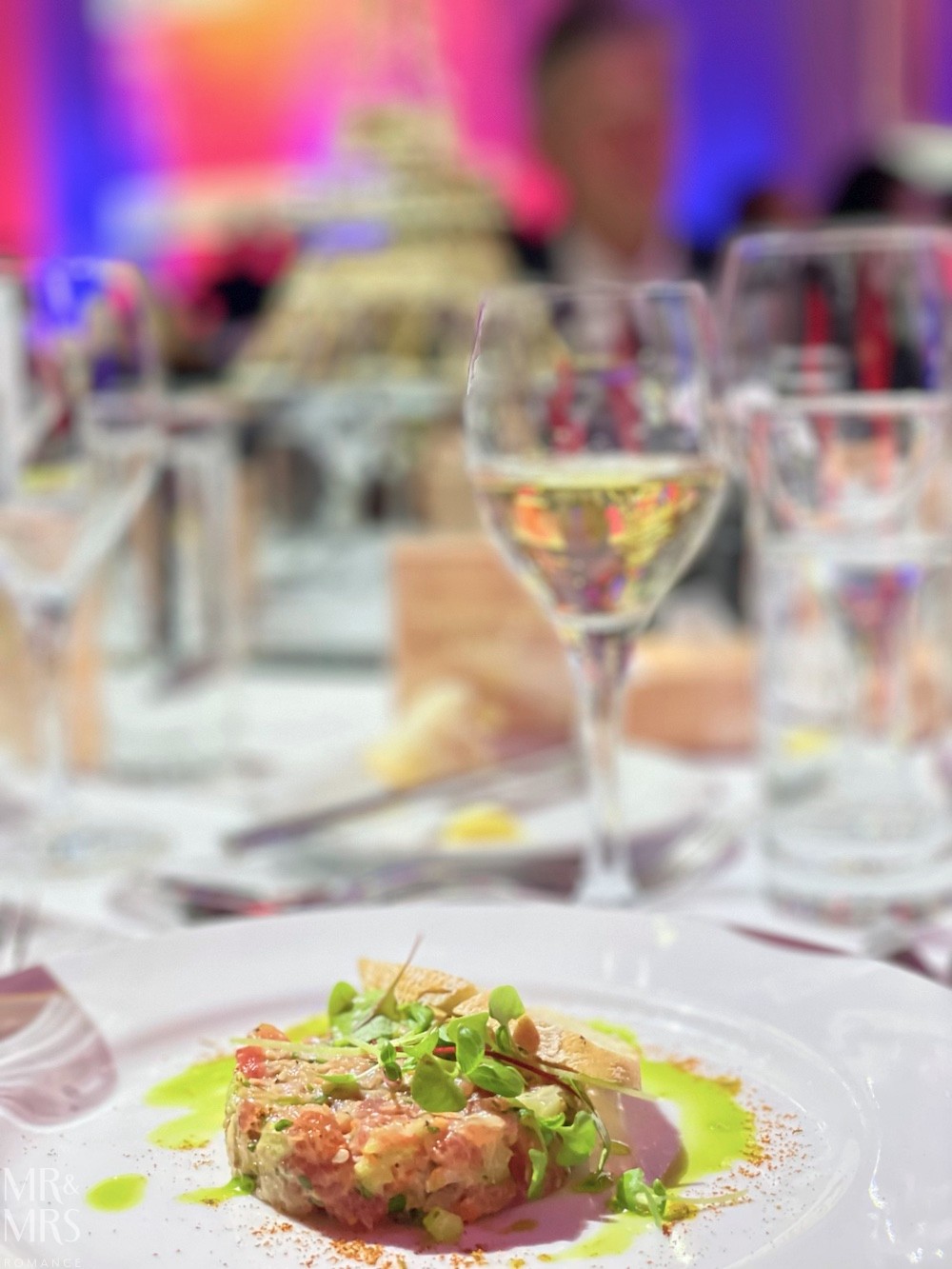 Along with endless French wine, the food at this soiree is impeccable. Delicate ceviche followed robust steak and a huge slab of pate de foie gras, the meal has a distinct Parisian vibe.

We also hear from the inimitable Peter Hook. Peter has been a dear friend of ours for some time now, but this is the first time we’ve seen him really turn on the charm for such a big audience. 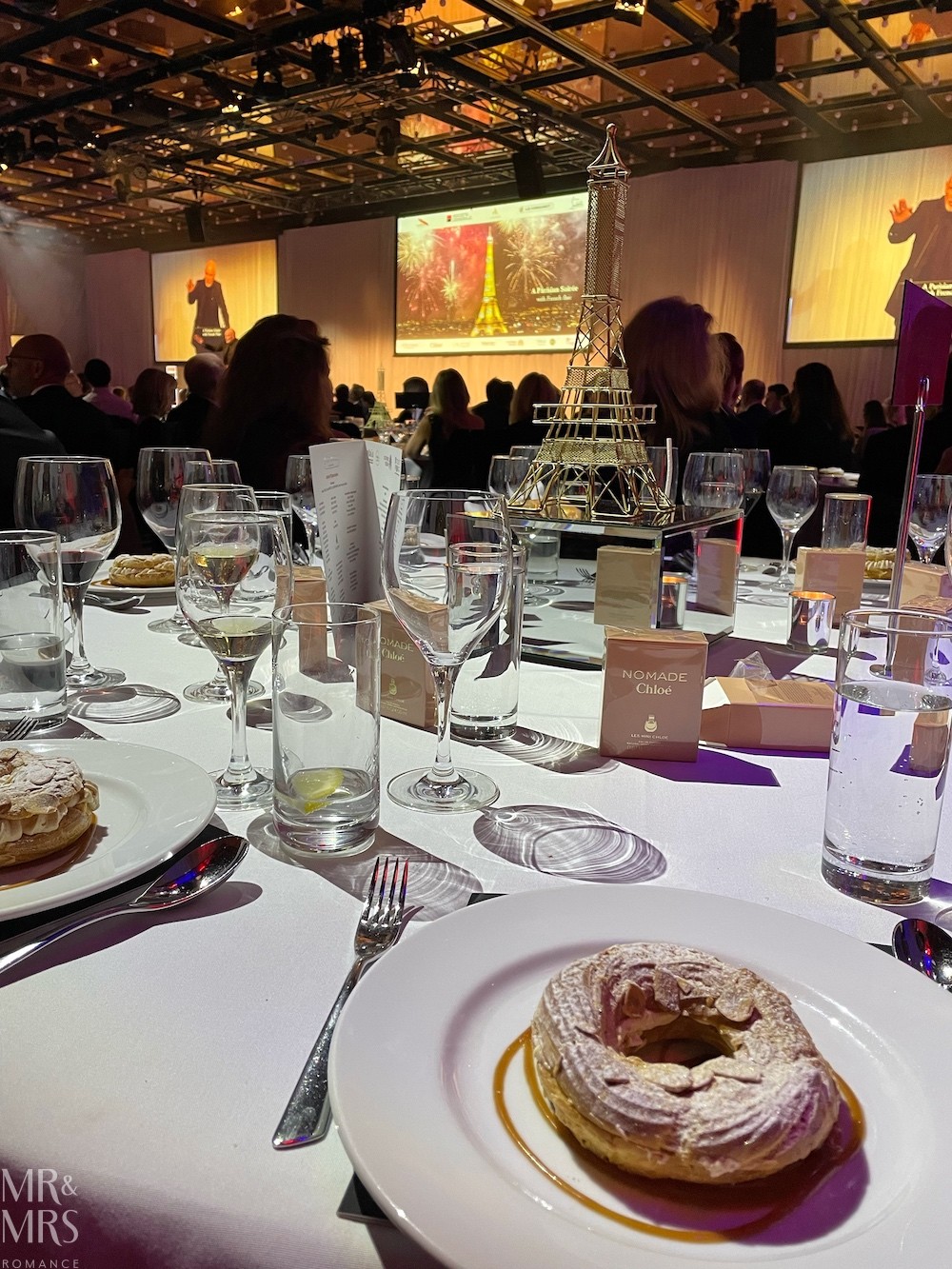 With dessert—an ambrosial almond meringue with almond paste inside and a drizzle of salted caramel—comes another impressive speaker: Peter FitzSimons.

Of course, Fitzy’s speech is bracketed in 18th and 19th Century history, but his experience as a Wallaby legend brings a fascinating perspective to the evening. 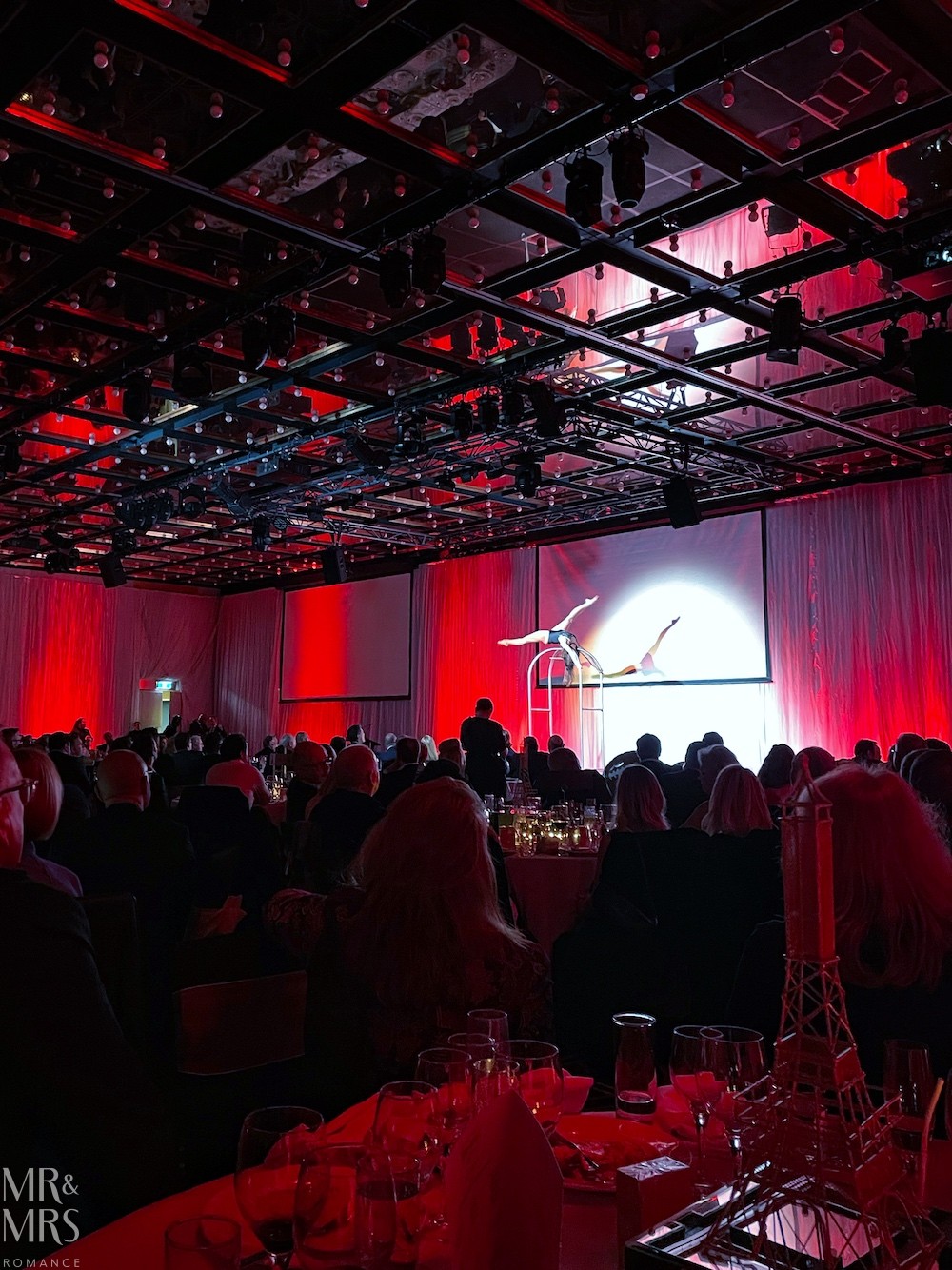 We’re also entertained by a cabaret/acrobatics performer from Lido Champs-Elysées. And as this is a travel event hosted in one of Sydney’s premier hotels, her apparatus is appropriately a porter’s luggage trolley. 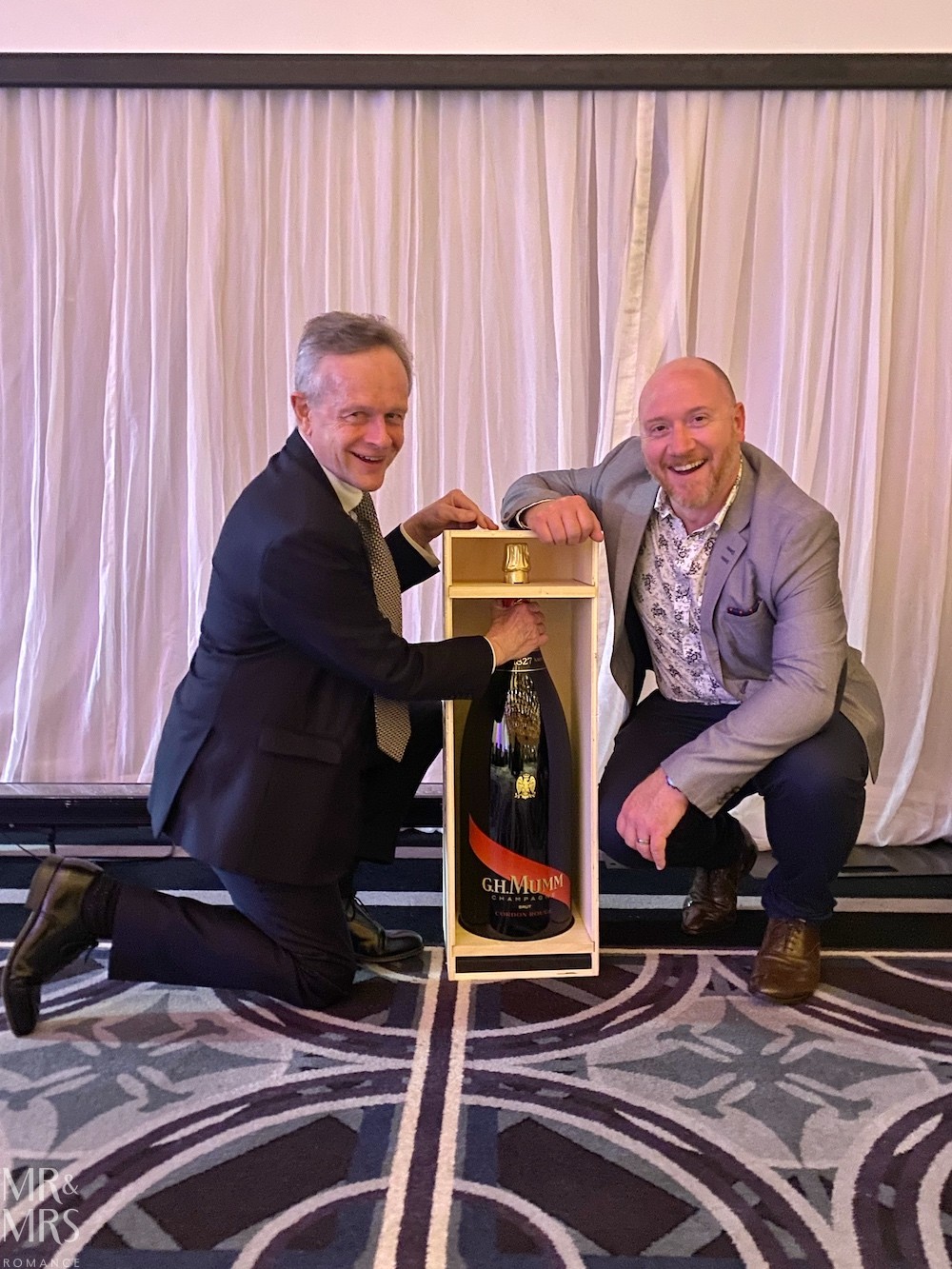 There are also some amazing prizes for a few lucky winners. Unfortunately neither Peter Hook nor I won this: a nebuchadnezzar of Mumm Champagne.

This enormous bottle of bubbly holds a mammoth 15 litres and is 20 times bigger than a regular bottle. Astonishingly, it’s not the biggest bottle you can get—apparently it goes up to a melchizedek, which is 40 times the size of a regular bottle, though these are very rare.

It’s all Peter and I can do to restrain ourselves from ‘borrowing’ this one. 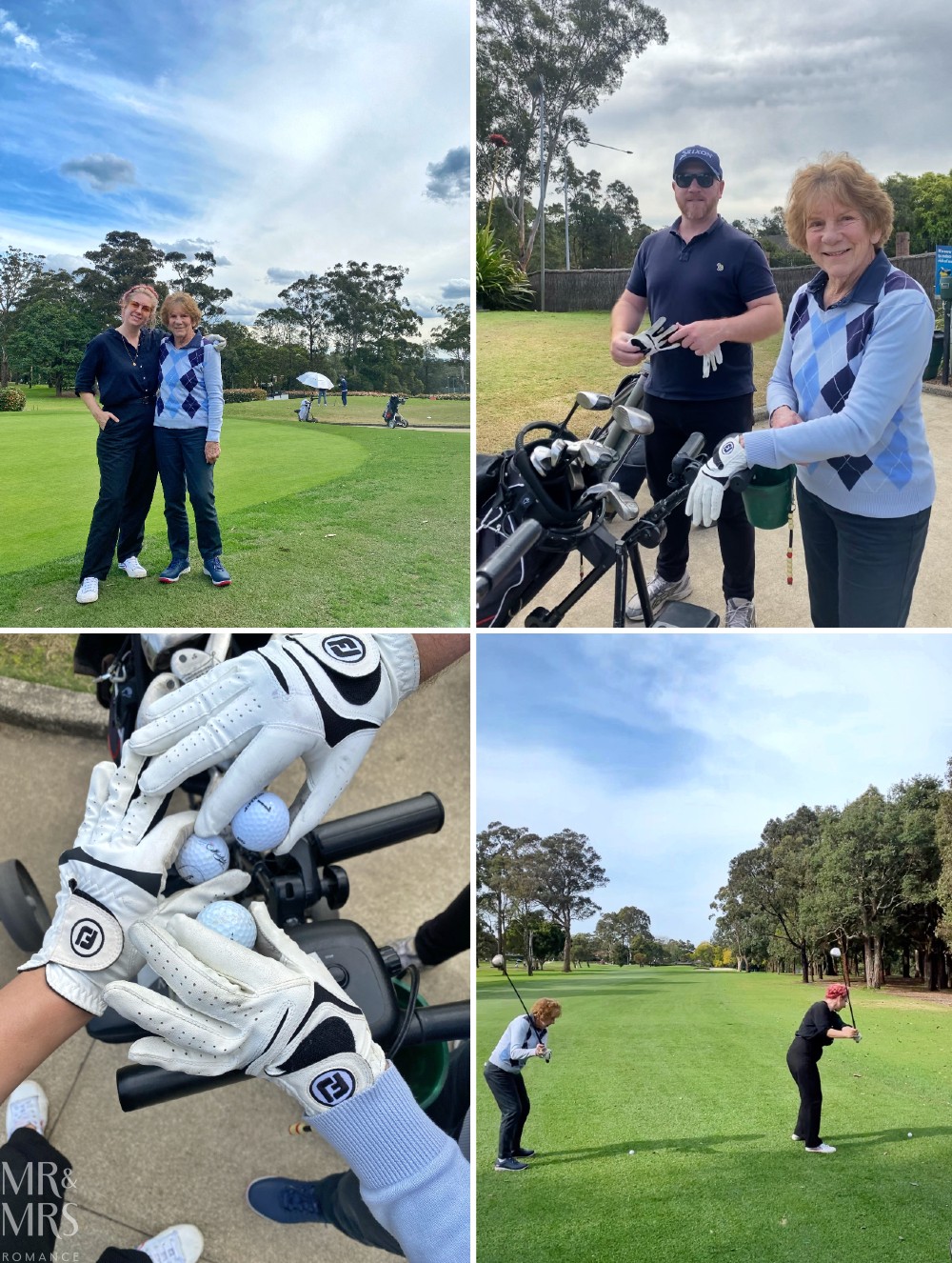 Today, we’re taking Christina’s mum out for a quick round of golf for her birthday!

Because of the rain, it’s been a long time since any of us has played, but it’s good to get back into the swing—if you’ll excuse the expression. Without fail, Jeanette hits the ball straight down the middle. She’s so happy to be back on the course.

I only manage to lose one ball—a record for me and my southpaw slice. 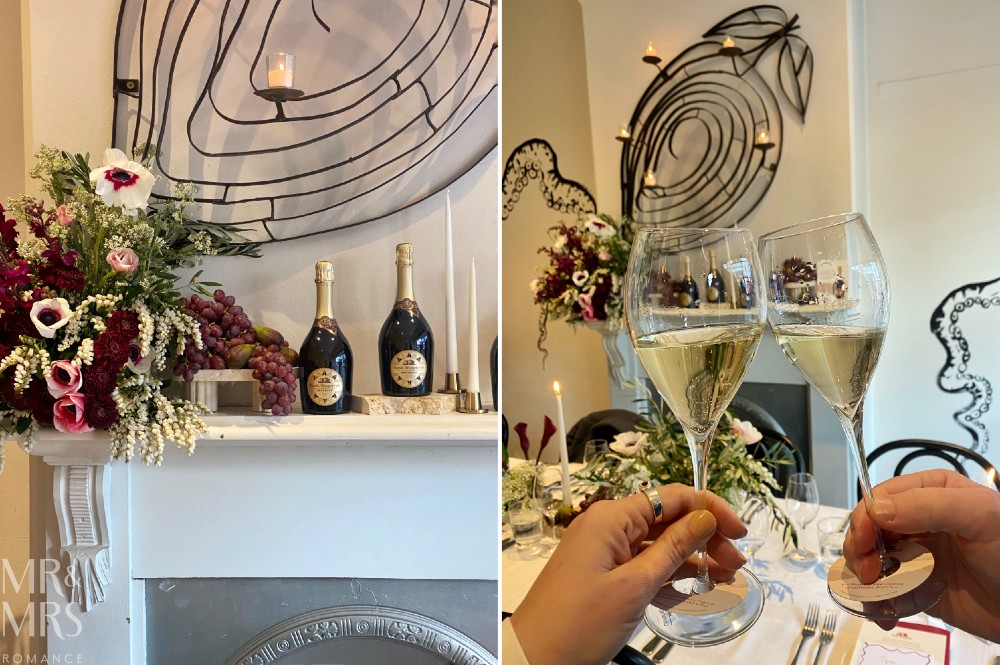 This evening, we’re in Leichhardt—Sydney’s little Italy—for the launch of the ST. ALi Italian Film Festival.

Things kick off with a superb meal at Capriccio Osteria, a truly Italian eatery, and share a meal with Erika Gallon, the representative from Santa Margherita Wines in Italy. The winery started making Prosecco in 1952 and have turned it into an art form.

This Italian sparkling from Veneto—the traditional homeland of Prosecco—is superb and goes so well with our antipasti of house-made focaccia and arancini. And the best news of all is this Santa Margherita Prosecco Superiore Di Valdobbiandene DOCG Brut is only $19.99(RRP) from Dan Murphy’s and BWS. 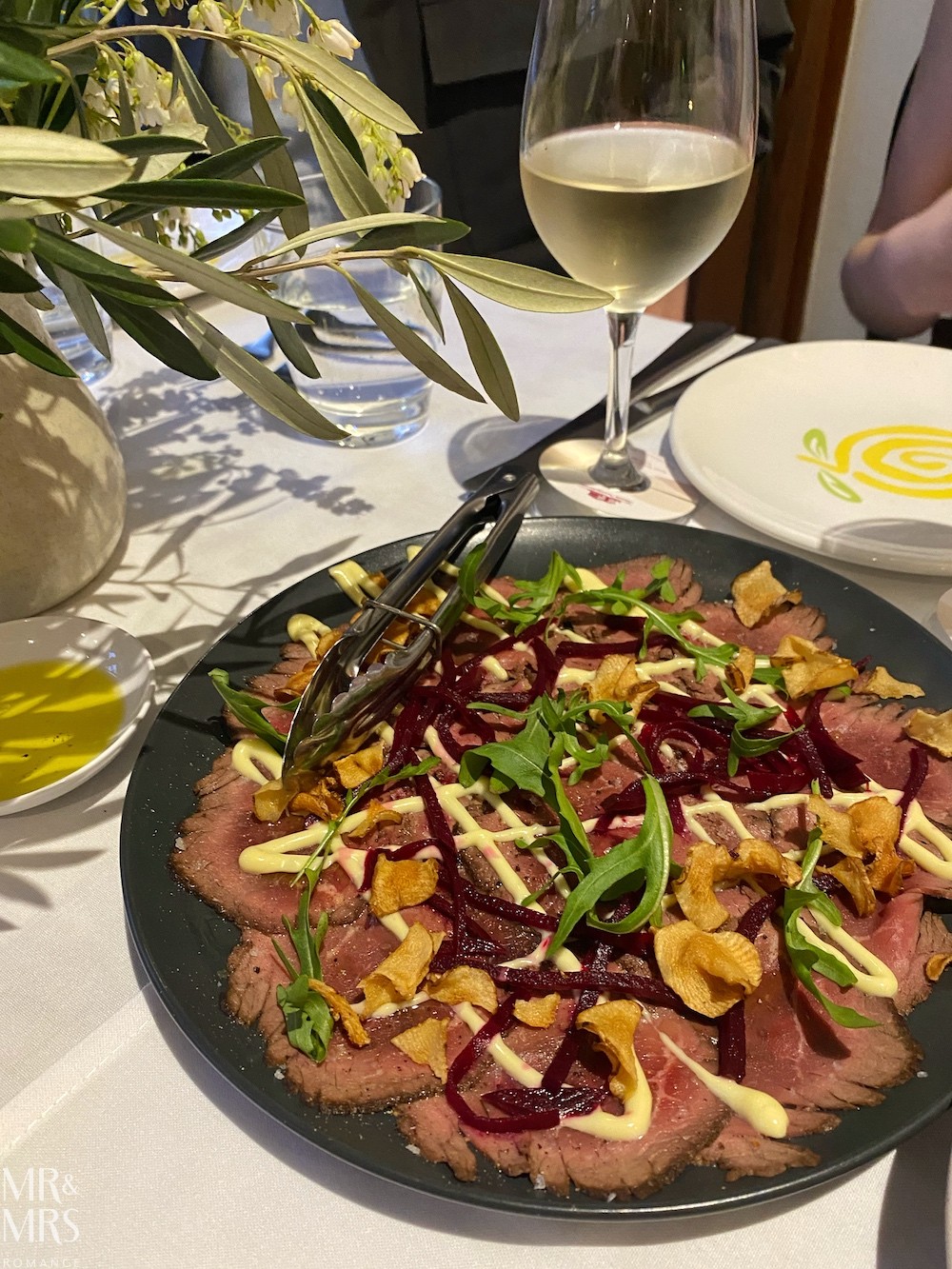 Sommelier Samantha Payne, who has also joined us for dinner, talks us through this surprisingly rich and full-flavoured wine.

Pinot Grigio is usually seen as quite a mild, low-impact wine, but this one, which is more traditional, has plenty of texture and body, and has deep savoury notes that come out after the initial fruit flavours calm down. 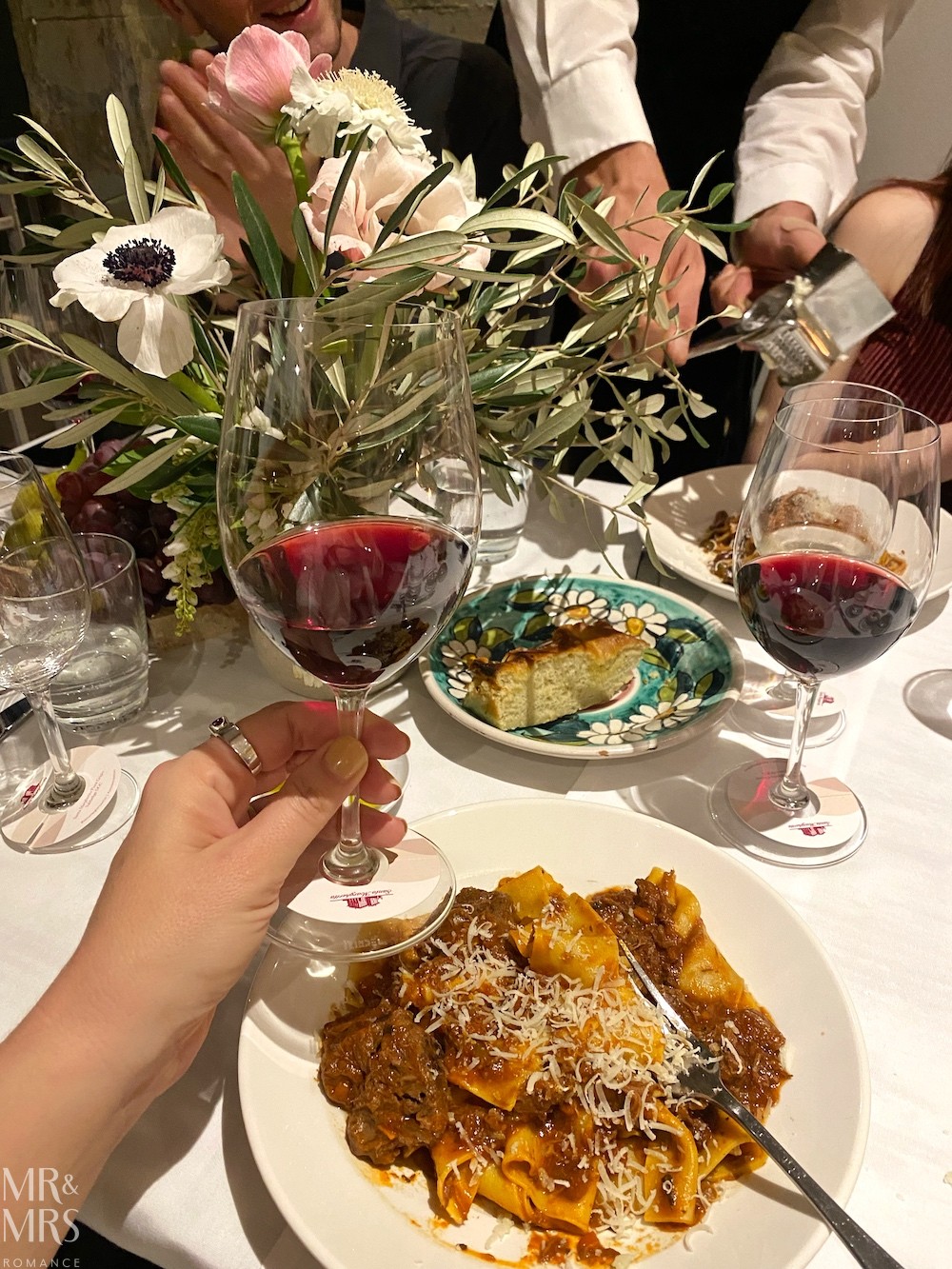 To finish off the meal, we have a choice of spaghetti alla puttanesca or saffron pappardelle with ragu osso buco. As you can see Christina has gone with the pappardelle (as have I). It’s a sumptuous dish, perfect for a cool evening.

And with it comes Santa Margherita’s Chianti Classico DOCG. This rich, medium-bodied Sangiovese goes perfectly with the robust pasta and slow-cooked red meat. 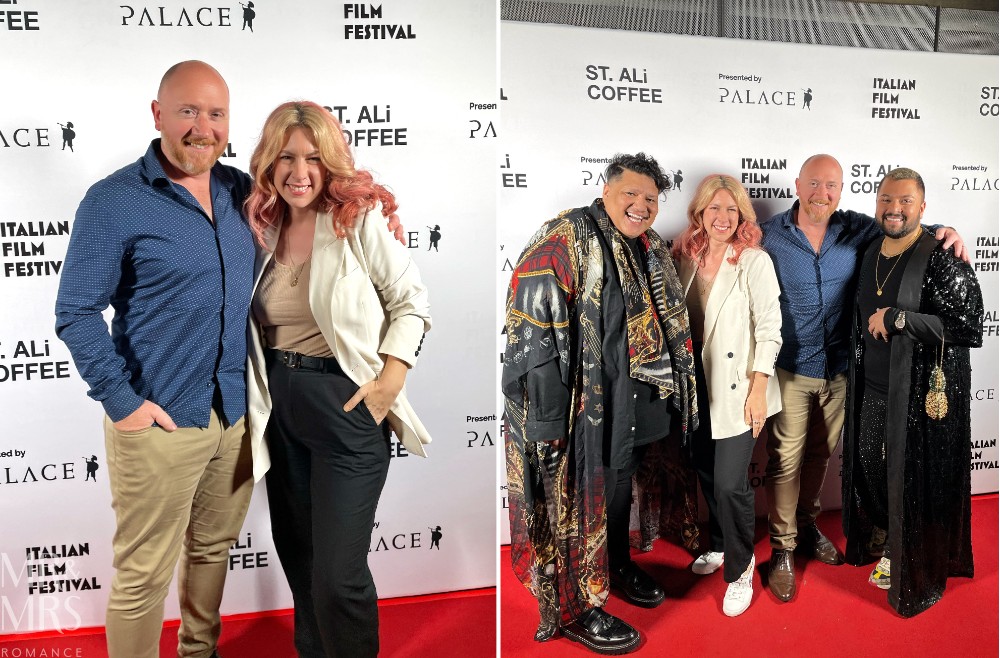 When our plates are finally empty, we clear out of Capriccio Osteria (but we’ll definitely be back) and head to the next part of the evening: the cinema!

At Palace Cinema Norton Street, the centre of the Italian Film Festival, we grab a couple of photos on the media wall and even take the opportunity to have another snap with our mate Arrnott and his mate Fuzz.

You might recognise these guys from the recent MKR season, but Arrnott is also the talent behind fashion and lifestyle site Rogue la Vie. 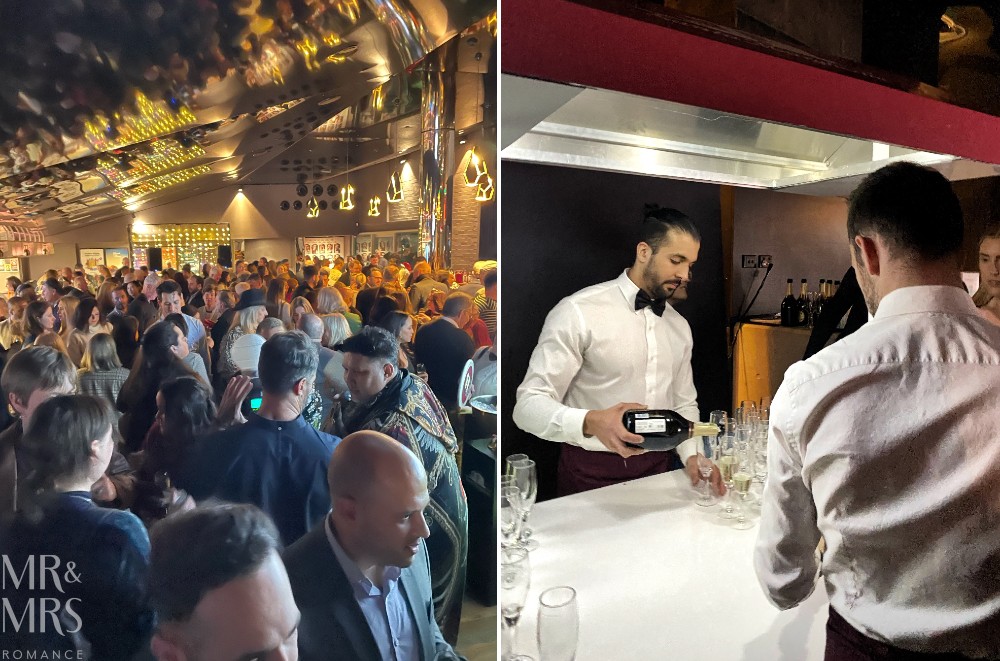 On the other side of the wall is one of the biggest crowds we’ve been in since the start of the pandemic. It’s quite overwhelming.

Everyone’s here to see the start of the film festival, which is brilliant, but we’re not used to this many people in one place or for this cinema, which is usually pretty quiet, to be so busy either!

Thankfully, there’s still plenty of Santa Margherita Prosecco Superiore being poured, so we try and find a quiet spot and enjoy our bubbles. 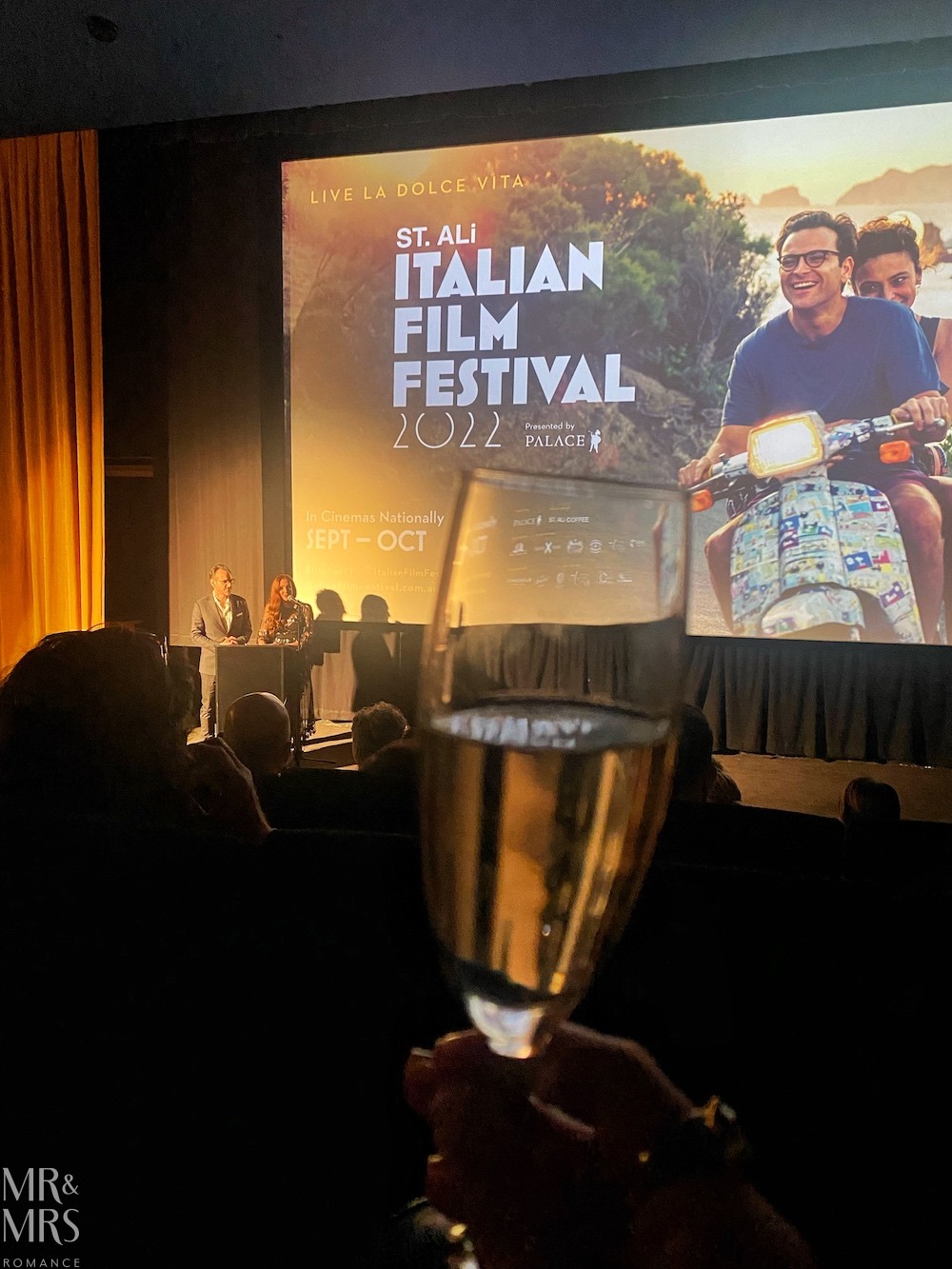 We finally make it into our seats, where we hear from the brother-and-sister team Benjamin and Isabella Zeccola, whose family started and still run the Palace Cinema group.

They announce the start of this year’s ST ALi Italian Film Festival and introduce what turns out to be a very funny heartwarming Italian comedy called Belli Ciao. It’s a film that’s set partly in Puglia in Italy’s southeast and it immediately makes us want to get back to Italy.

It’s a story of two childhood friends who grow up in the Pugliese countryside, but one moves to the big smoke, setting himself up as a financier in Milan.

A story of friendship, greed and redemption, the film presents the cultural perspective of the seemingly global rivalry between the north and the south.

Today I (Christina) am heading to Aalia restaurant in Martin Place for the Australian launch of AHC skincare. You might have already heard of this cult brand on Tiktok because it’s the #1 skincare brand in Korea. One of the AHC Real Eye Cream for the Face sells every six seconds in Korea! And now it’s here at Adorebeauty and soon to launch at Priceline too. I can’t wait to try it and report back.

Also to add that Aalia is a gorgeous space in the city, in the newly renovated MLC centre under Cabana Bar and would be a beautiful spot for a Middle Eastern long lunch. 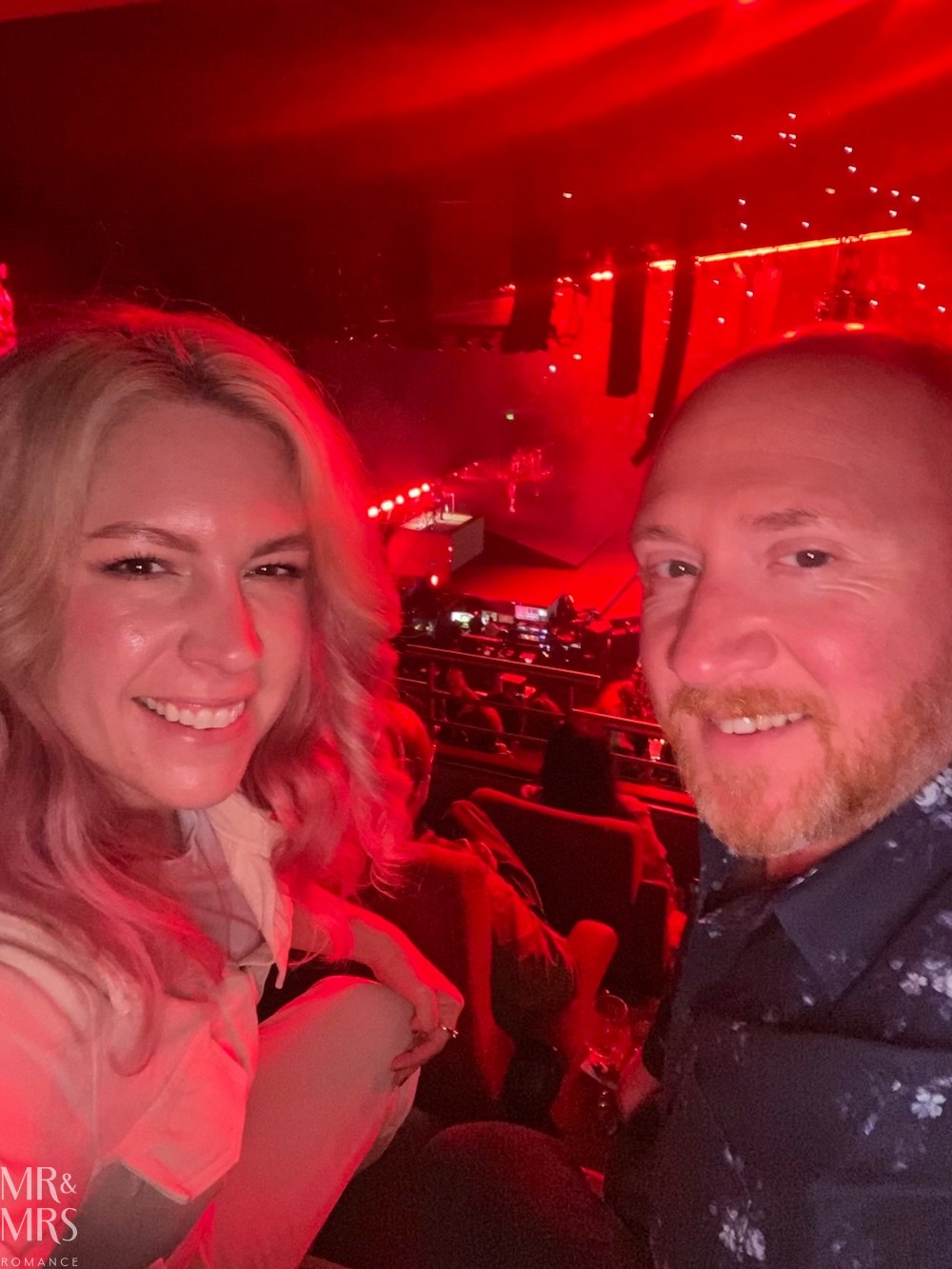 Tonight we’re ramping up our level of crowd coping mechanisms even more: we’re at a concert!

Thankfully, we’re lucky enough to be in the VIP corporate suite with our friends at Accor Hotels, so the ‘crowd’ is limited to just 20 of us. 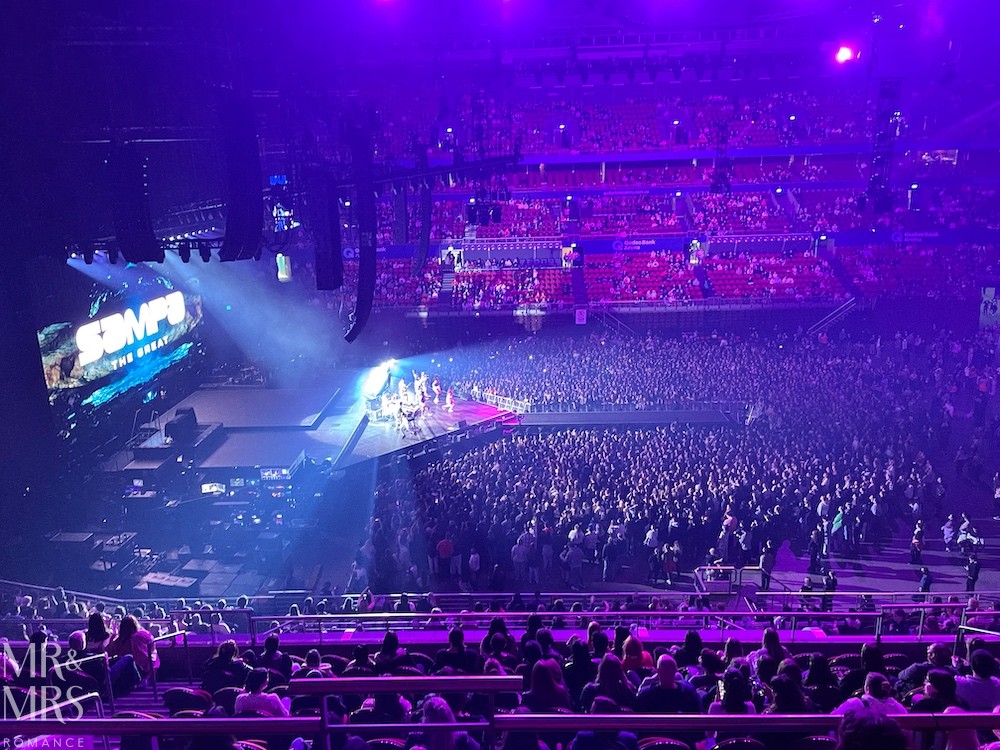 Things kick off with an amazing support act from Sampa the Great. This Zambian-born rapper and songwriter has the most incredible voice and range, and is now based here in Australia. 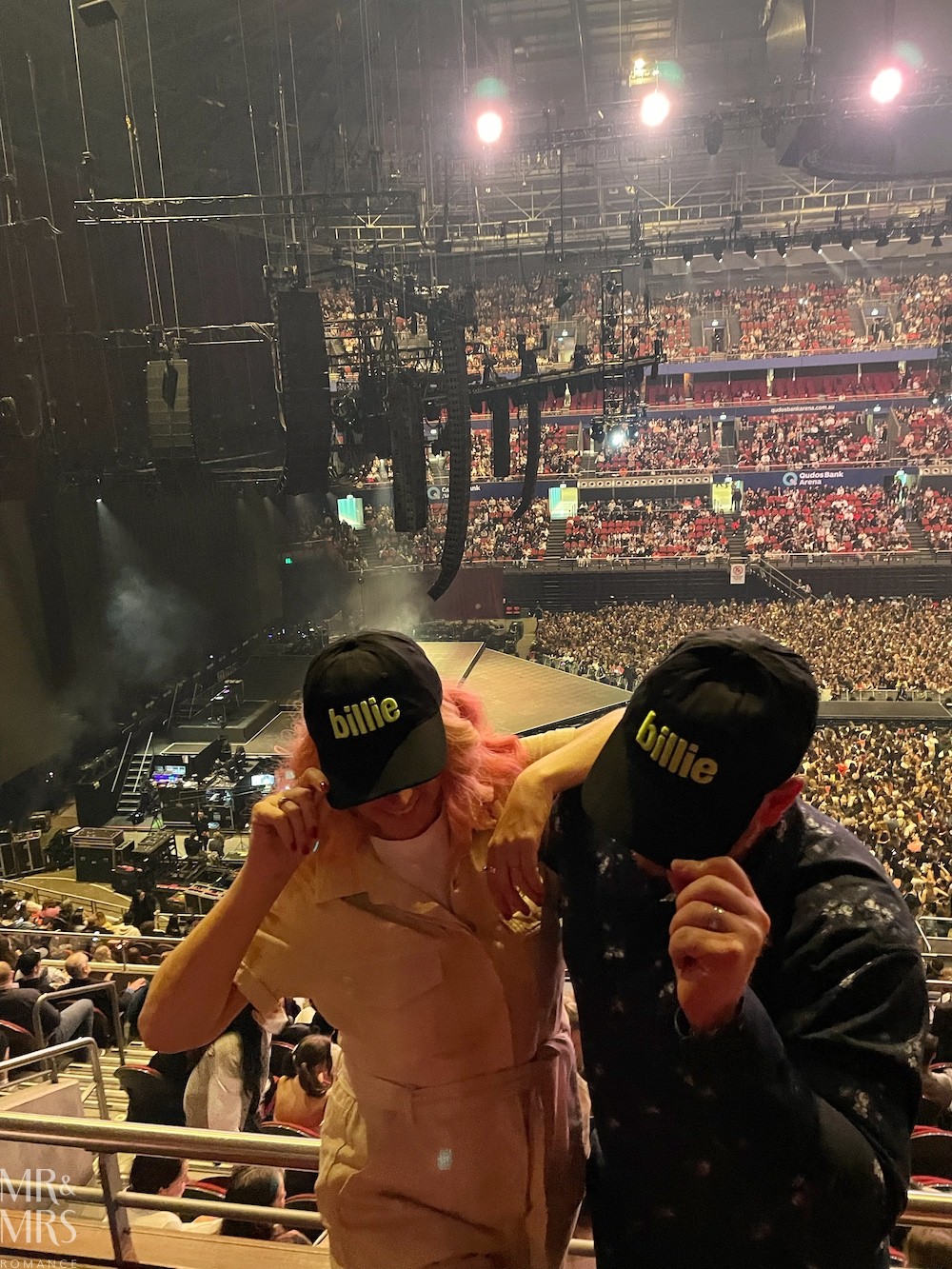 But as you can see, we’re really here to see someone else!

This is the last night of Billie Eilish’s time in Sydney, but it’s also her 70th performance in this mind-boggling world tour. And with just five more gigs to do, this is also the closing stage of a marathon for her. 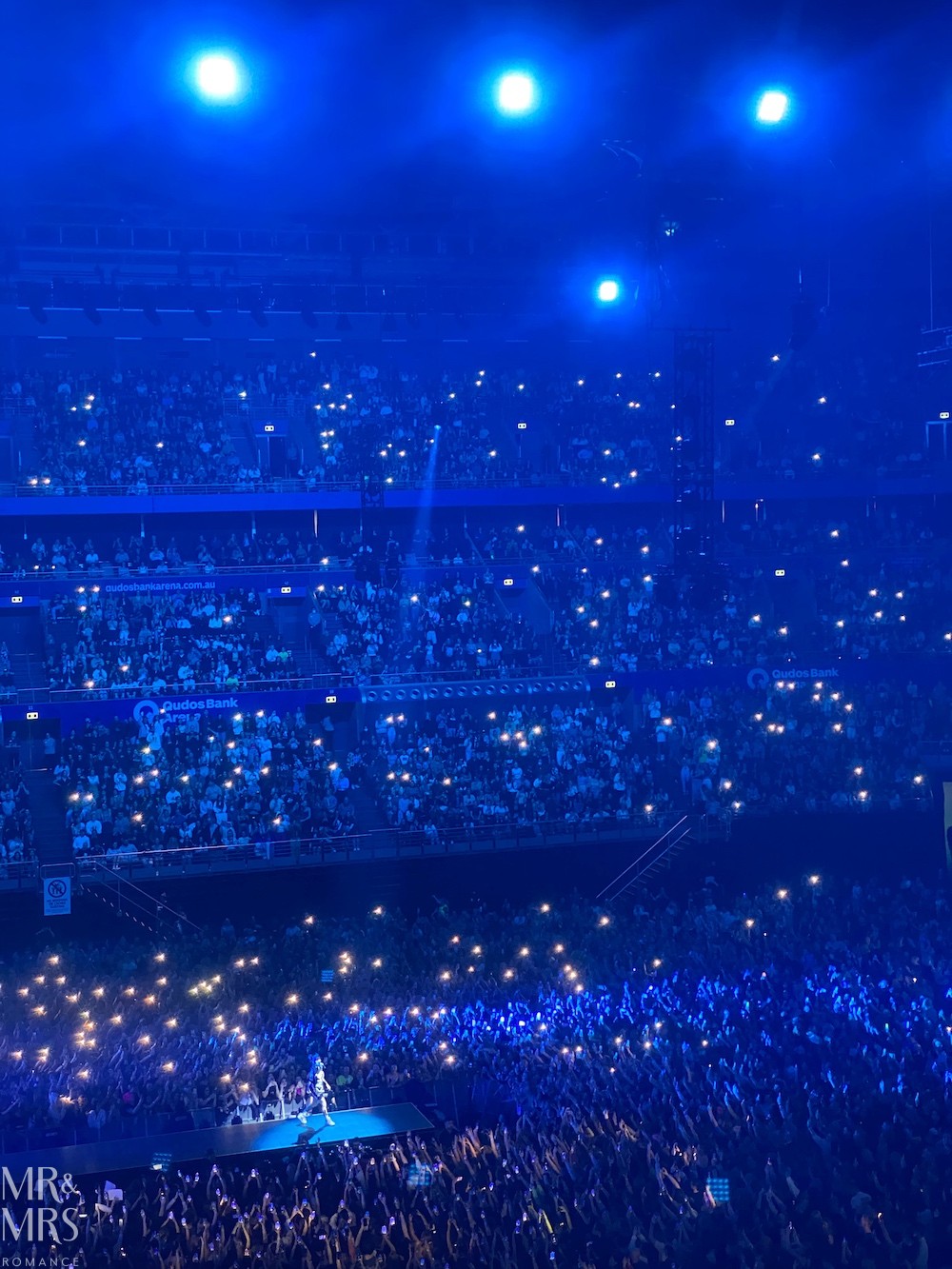 Even though she must be completely knackered after such a long campaign, Billie Eilish still performs with such incredible energy. It’s a sell-out crowd and the lights from everyone’s phones below makes for a real spectacle. 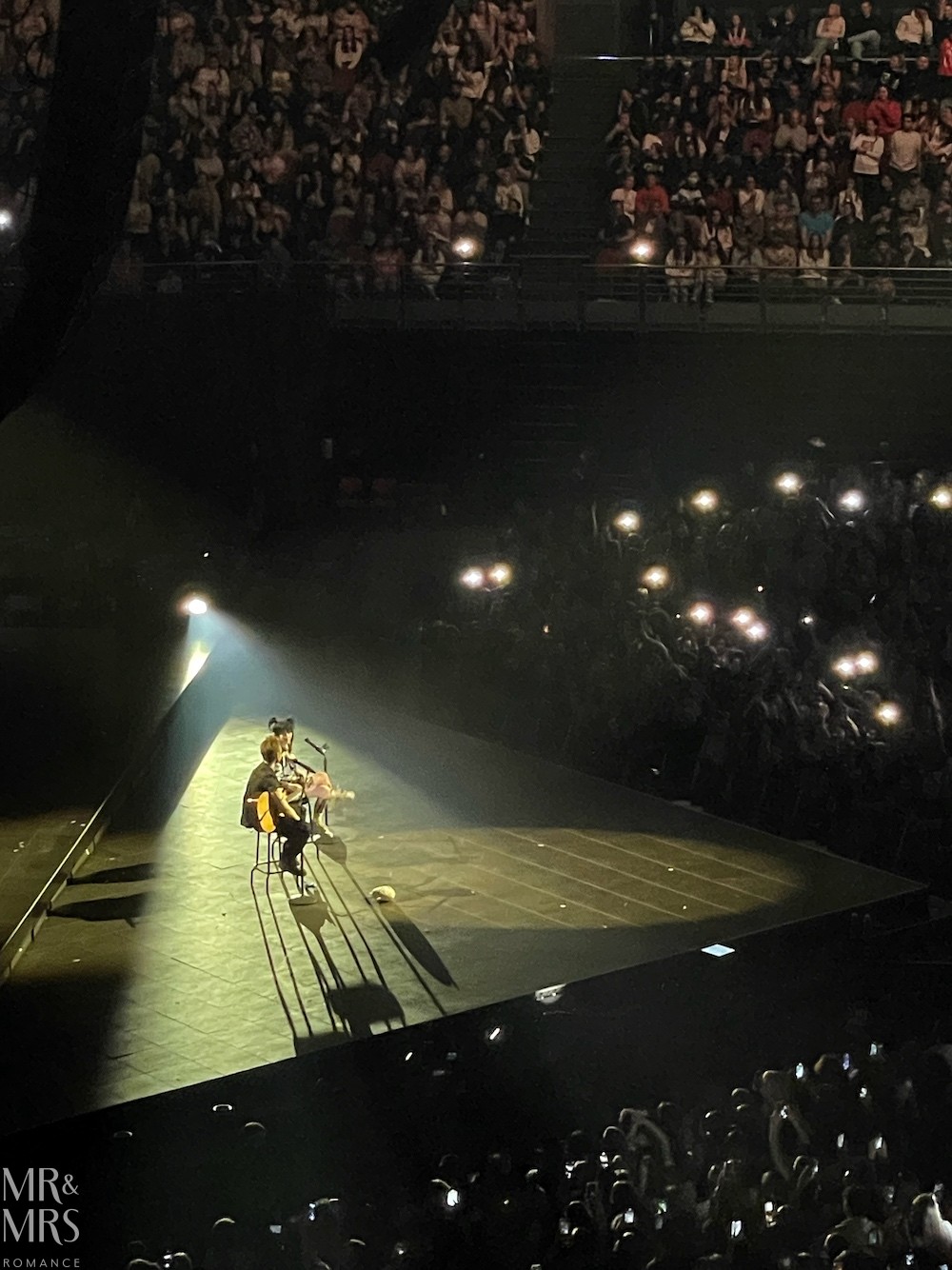 Billie takes the rare opportunity to have a sit down and does a couple of songs next to her brother Finneas.

This is an amazing partnership, with Finneas creating so much for the music that Billie performs, and she gives him so much credit too, which is lovely. 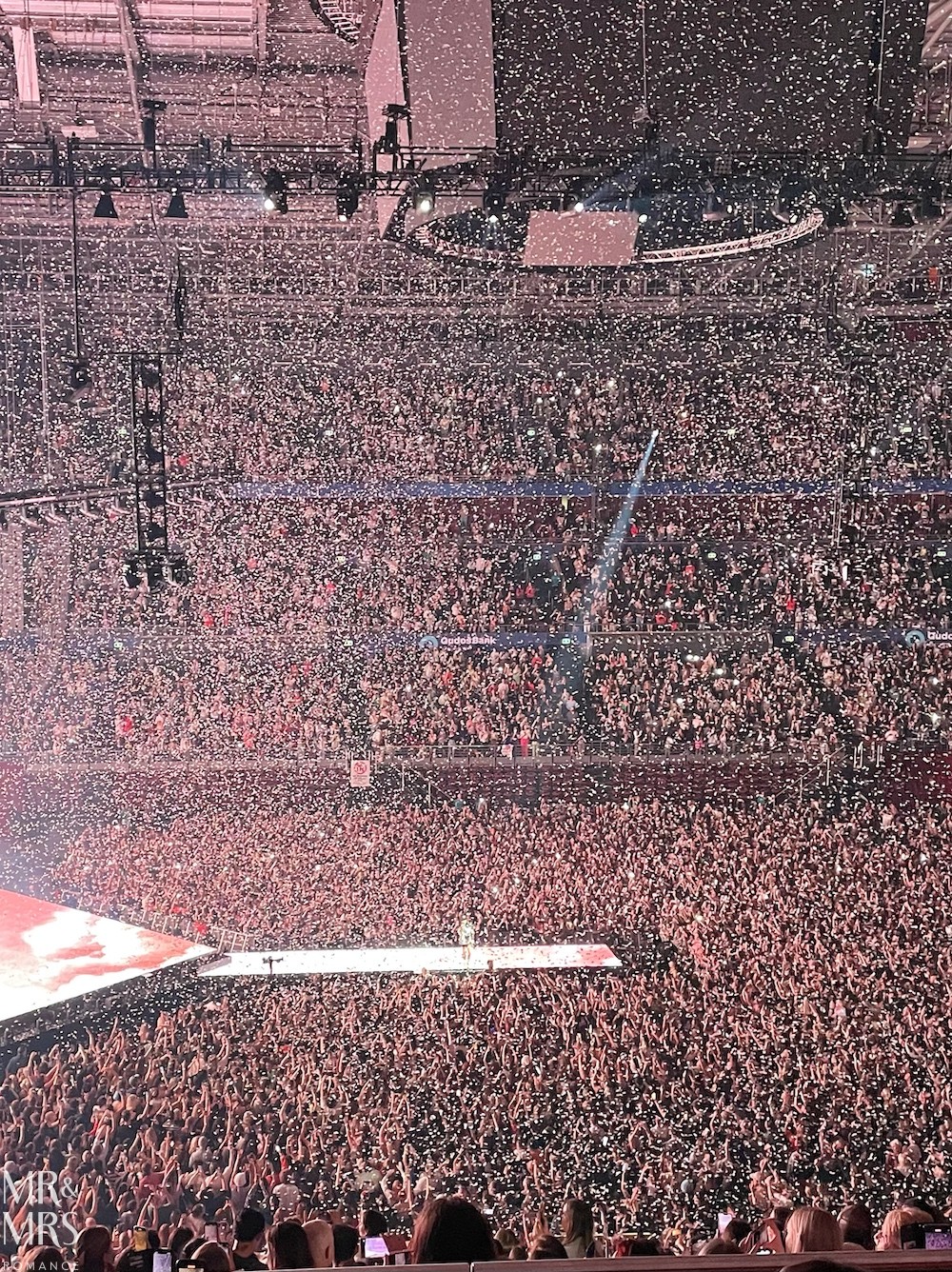 The concert ends with a massive ticker tape confetti drop that fills the Qudos Bank Arena and is still falling even after Billie and co have left the stage.

It’s such a great performance and she manages to keep up that crazy energy for the whole evening without a break.

At one point, Billie appears in a cherrypicker crane at the back of the stadium, singing and dancing as the arm extends out up to the midlevel stands.

When the song finishes, she climbs out of the basket and makes it back to the main stage through the corridors in under 40 seconds. In the meantime, she’s already started singing the next song. 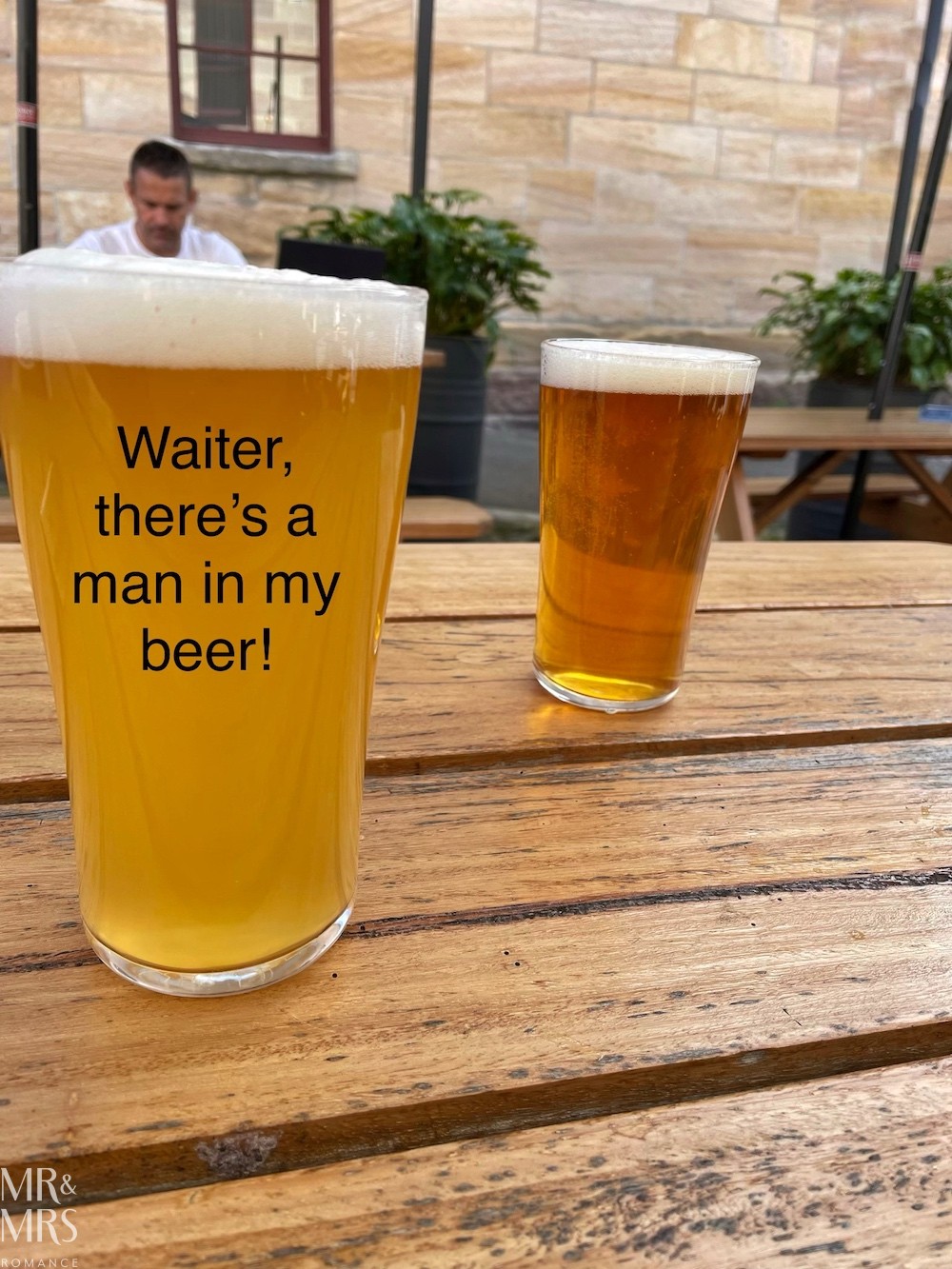 It’s been a busy week, so Christina and I finish with a bit of silliness and a couple of beers around Balmain.

The street-side beer garden at the London Hotel is the perfect spot to start things off… until I see something in my pint! 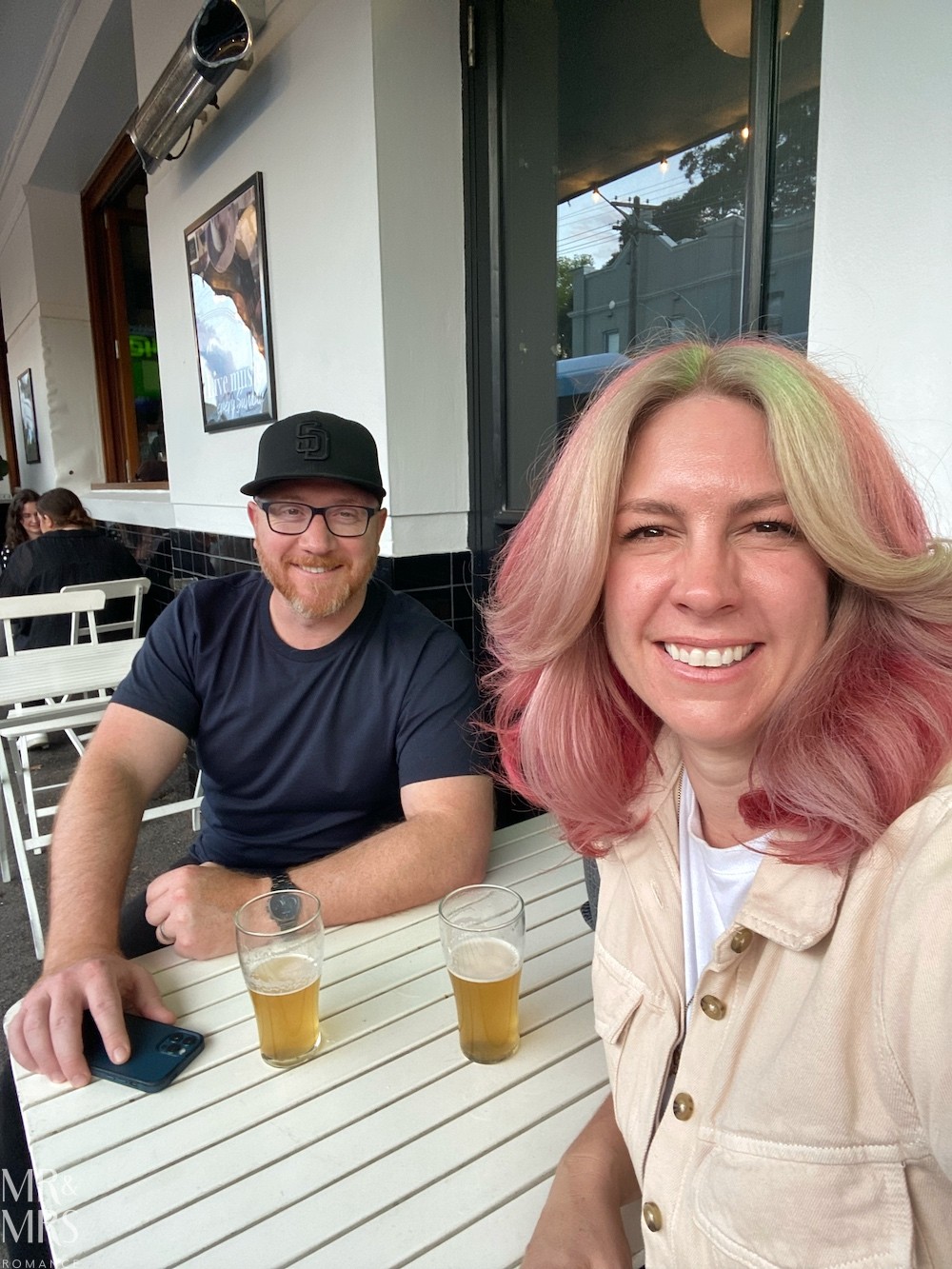 We hope you’ve enjoyed this Edition.

We were invited as media guests and VIPs to some of these events but our opinions remain our own.

Easter recipes all seem to contain chocolate eggs in some form or another, so we’ve decided to go buck the trend with something easy,…