Crisp golden edges, a caramelised base of crunchy layers and a centre so rich and fulfilling the contented smiles and sighs of your dinner guests will be as satisfying as the gratin pot is scraped clean. This potato dauphinoise recipe is an instant dinner all-star. 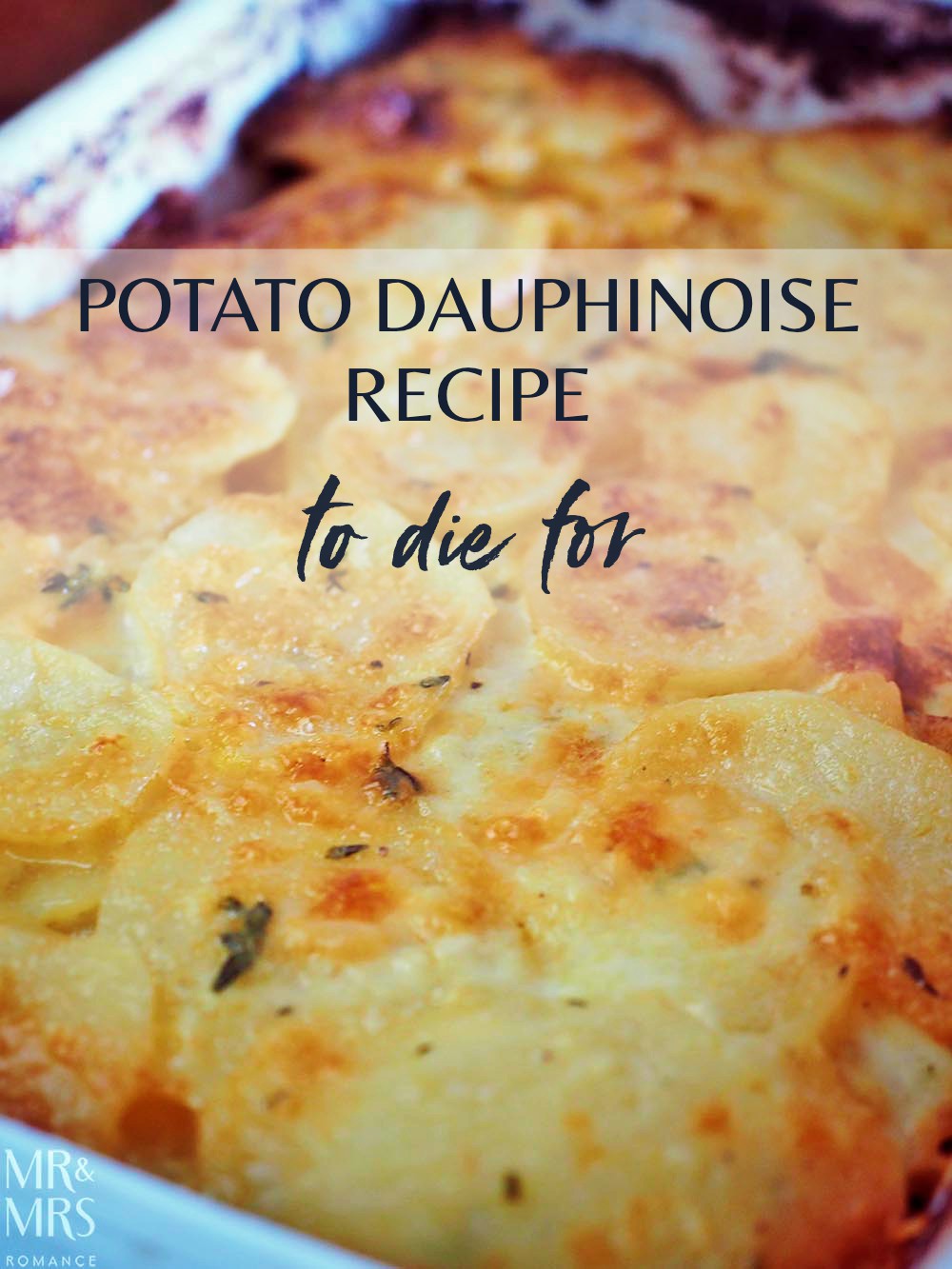 From the moment I pulled the dish from the oven, I knew this recipe was a world-beater. The way the sides of the pot were crusted with a dark golden crust while the middle was bronzed like it’d had two weeks in the sun.

But of course the dauphinoise recipe worked.

After all, it was written by a pro.

French chef, restauranteur and kitchen celeb Manu Feildel has shared his means and method for this indulgent dish as part of the launch of his new line of sauces… but more about that in a moment. 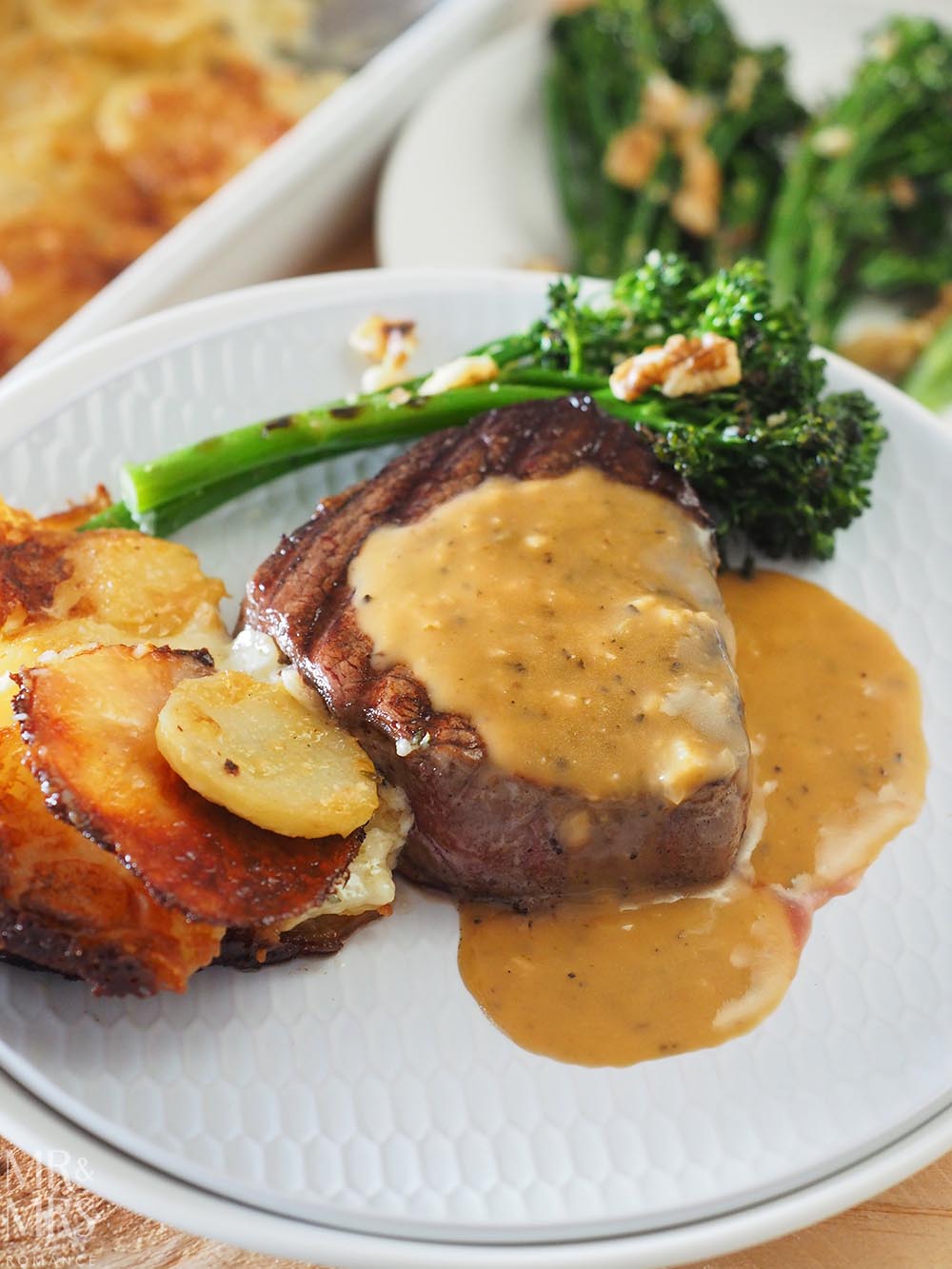 First of all, let’s talk about what exactly is the difference between potato bake (or potato gratin) and potato dauphinoise.

Potato gratin refers to the crust you get when you bake potatoes and cream in the oven.

The word ‘gratin’ comes from the French word ‘gratter’ meaning ‘to scrape’ because the delicious crust that forms on the pan is as valued by the French (and anyone with a tastebud) as the Spanish do the socorrat at the bottom of a paella.

The crust can come from a multitude of methods – usually using breadcrumbs or cheese. The potatoes are also usually pre-boiled.

Dauphinoise potatoes (or as my brother calls it ‘dolphin nose potatoes’… I think he’s joking), however, doesn’t use cheese or breadcrumbs – or anything else really. Just cream and heat. 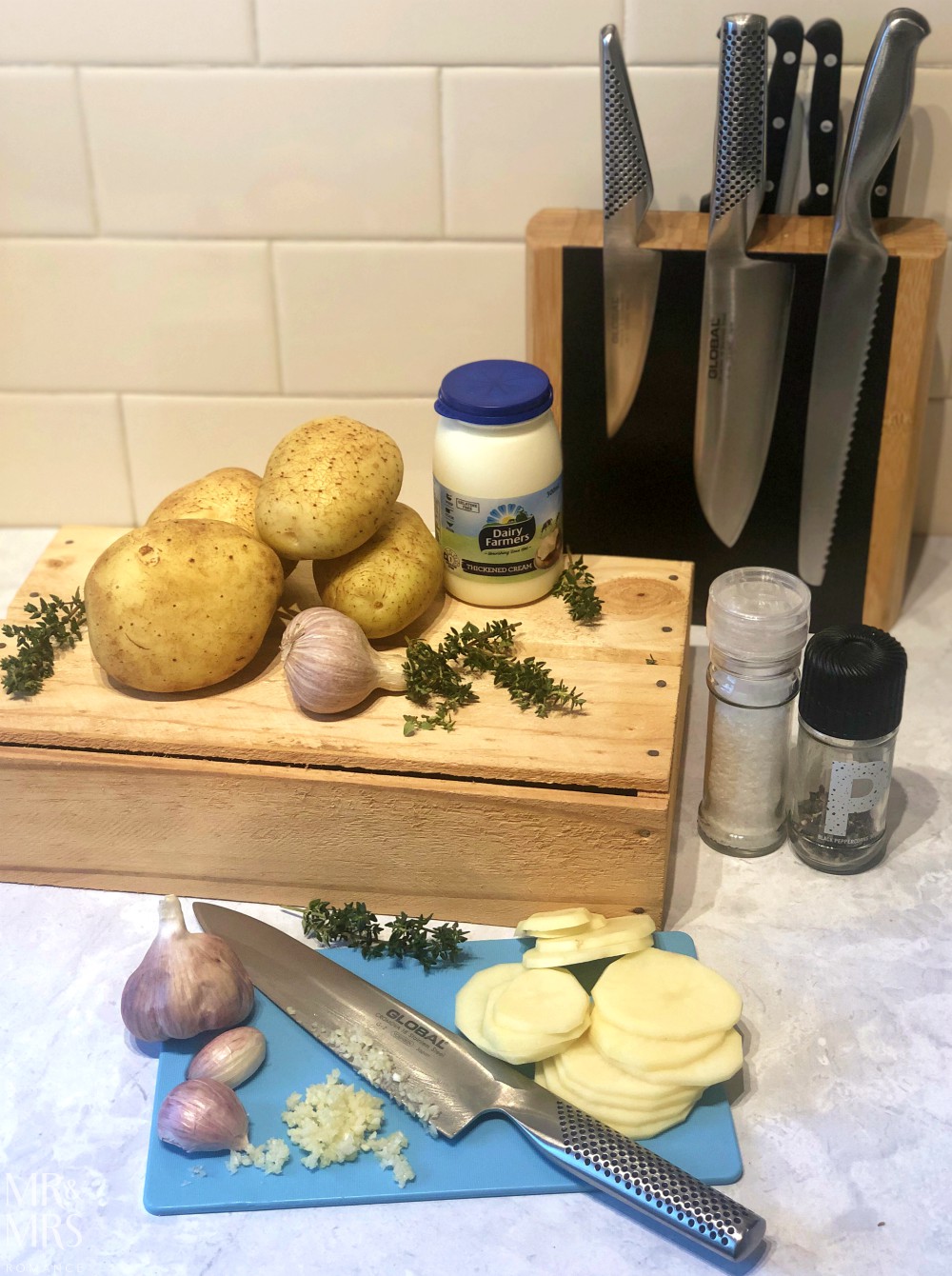 1. Combine the potatoes, cream, thyme, salt, pepper and garlic in a large saucepan and bring to the boil, then simmer for about 8 minutes.

2. Grease a 1.5 litre oven-proof dish with the coconut oil then pour the contents of the pan in. Try to create layers of potato as you go.

3. Cover the dish with foil and bake at 200ºC for 1 hour 30 minutes or until there is a golden crust on top and the cream has absorbed into the potatoes.

4. Remove the dish from the oven but keep the heat at 200ºC while you cook the steak. 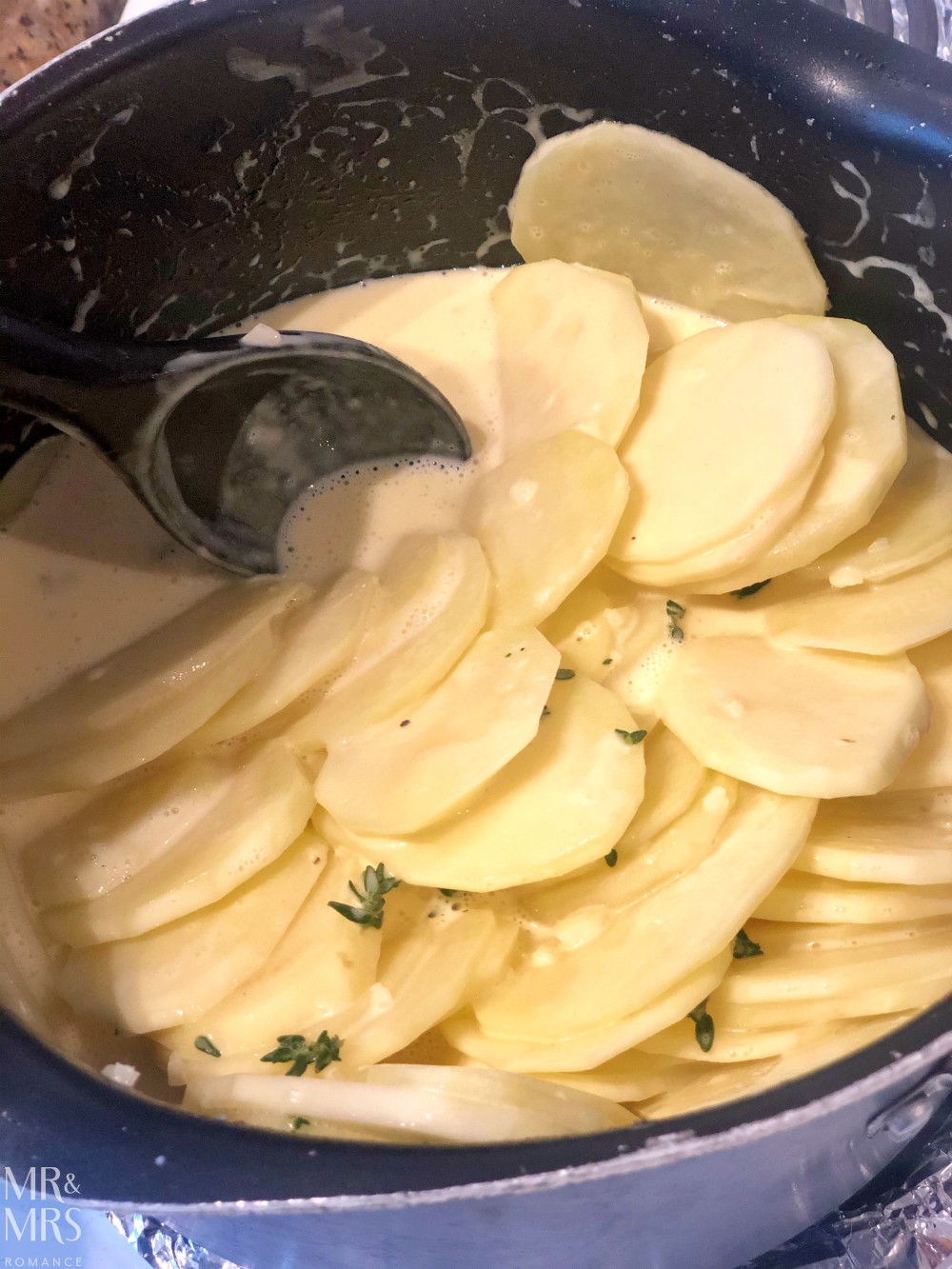 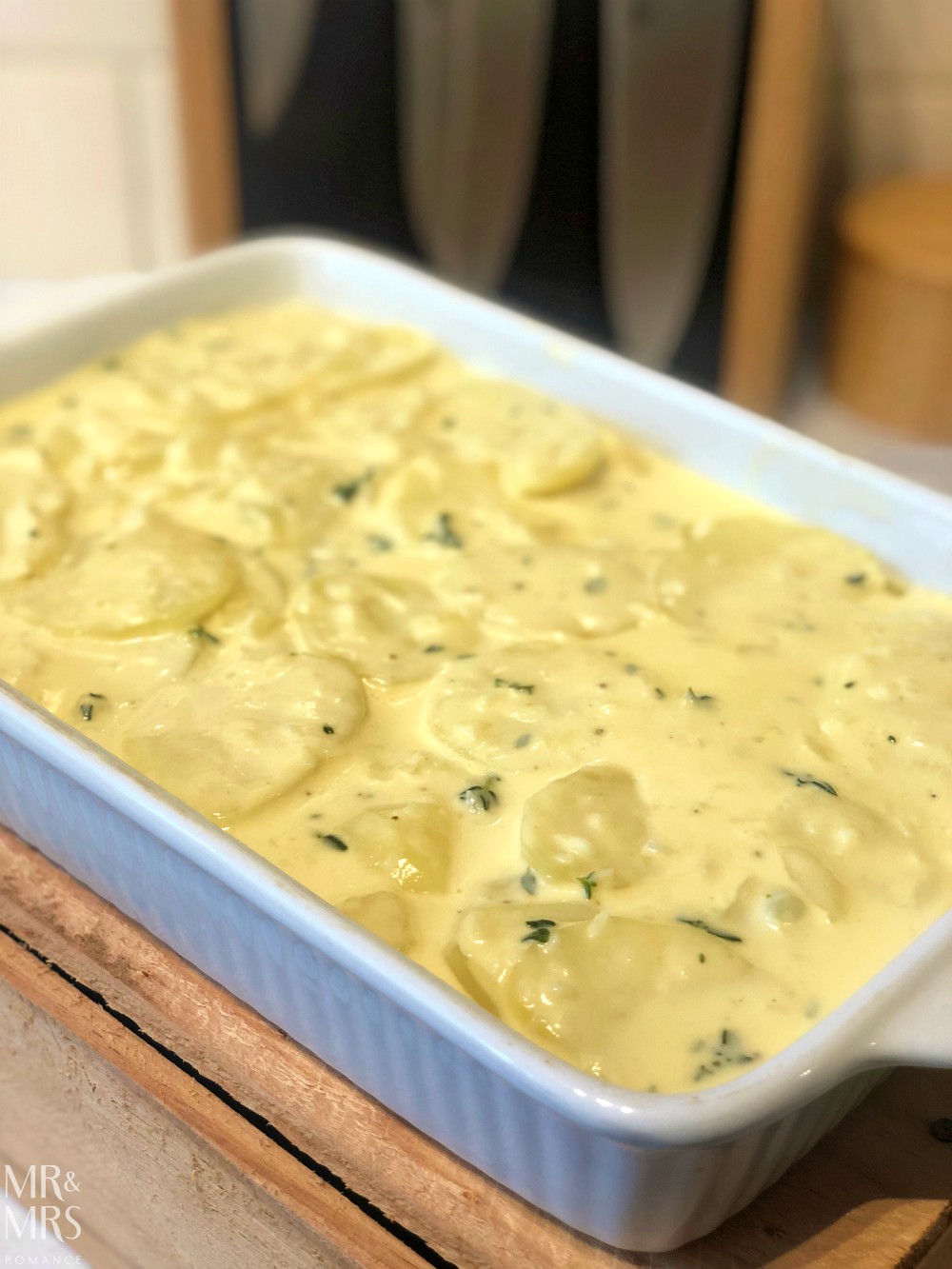 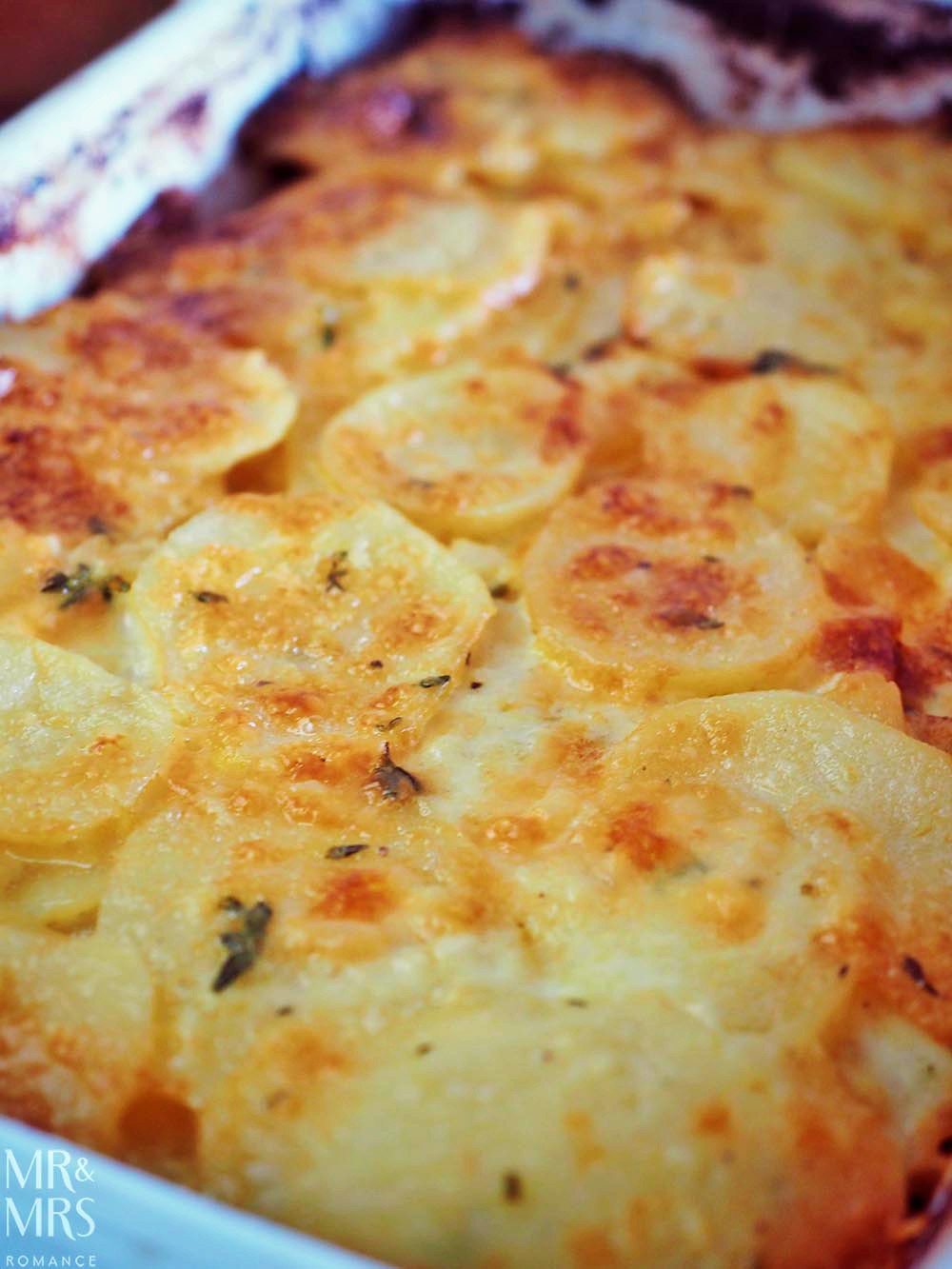 Everybody has their own way of cooking steak. I really enjoyed how Manu’s method worked for me.

He has shared this method alongside his potato dauphinoise recipe but here’s what to do: 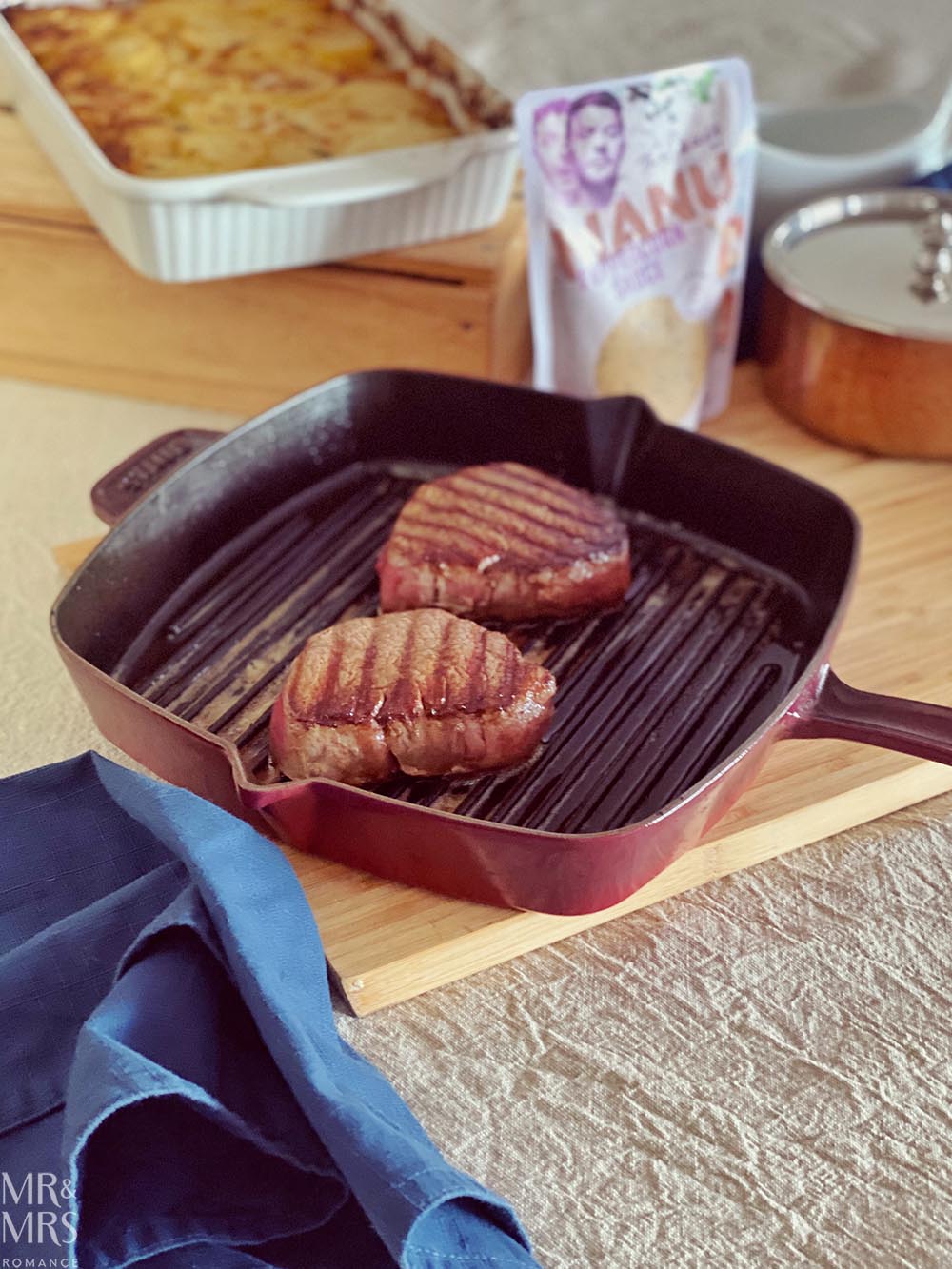 1. Get an oven-proof pan (I used my cast iron griddle skillet) hot and add about 30g of butter. When the butter starts to froth and brown, lay your seasoned steaks down a cook for about 3 minutes.

2. Turn the steaks and cook in the oven for another 3 minutes – this will give you a medium-rare steak.

3. Remove the steaks and leave them on a plate to rest – covered.

4. While the steaks are resting, put the pan back on the stove and cook your broccolini, turning once, until you see colour forming.

5. Swap the meat for the veggies and put the pan back in the oven to warm up the steaks again. While that’s happening, heat your choice of Sauce by Manu in a small saucepan.

6. Serve the broccolini with crushed walnuts and pour a greedy amount of sauce over your steak. 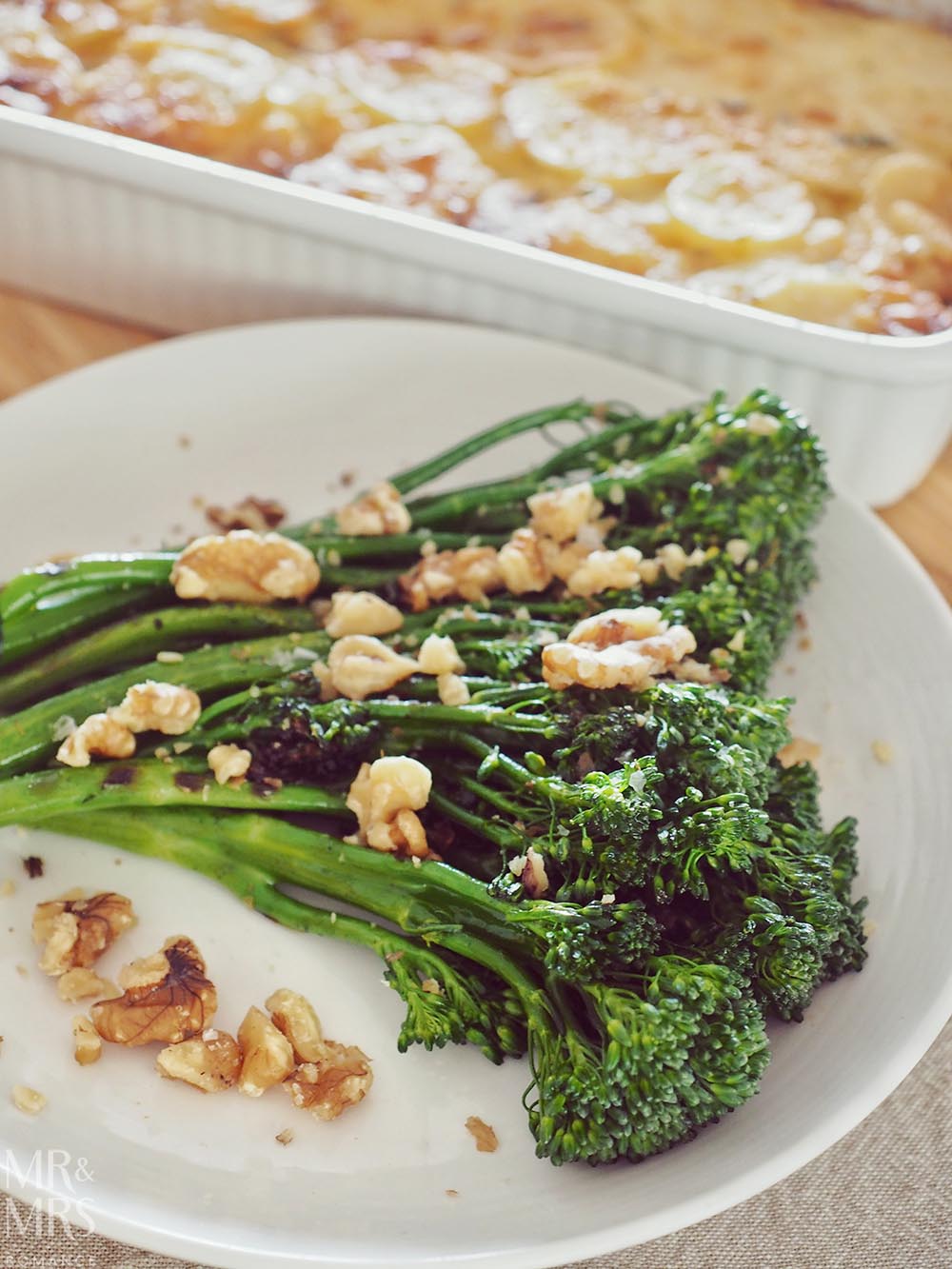 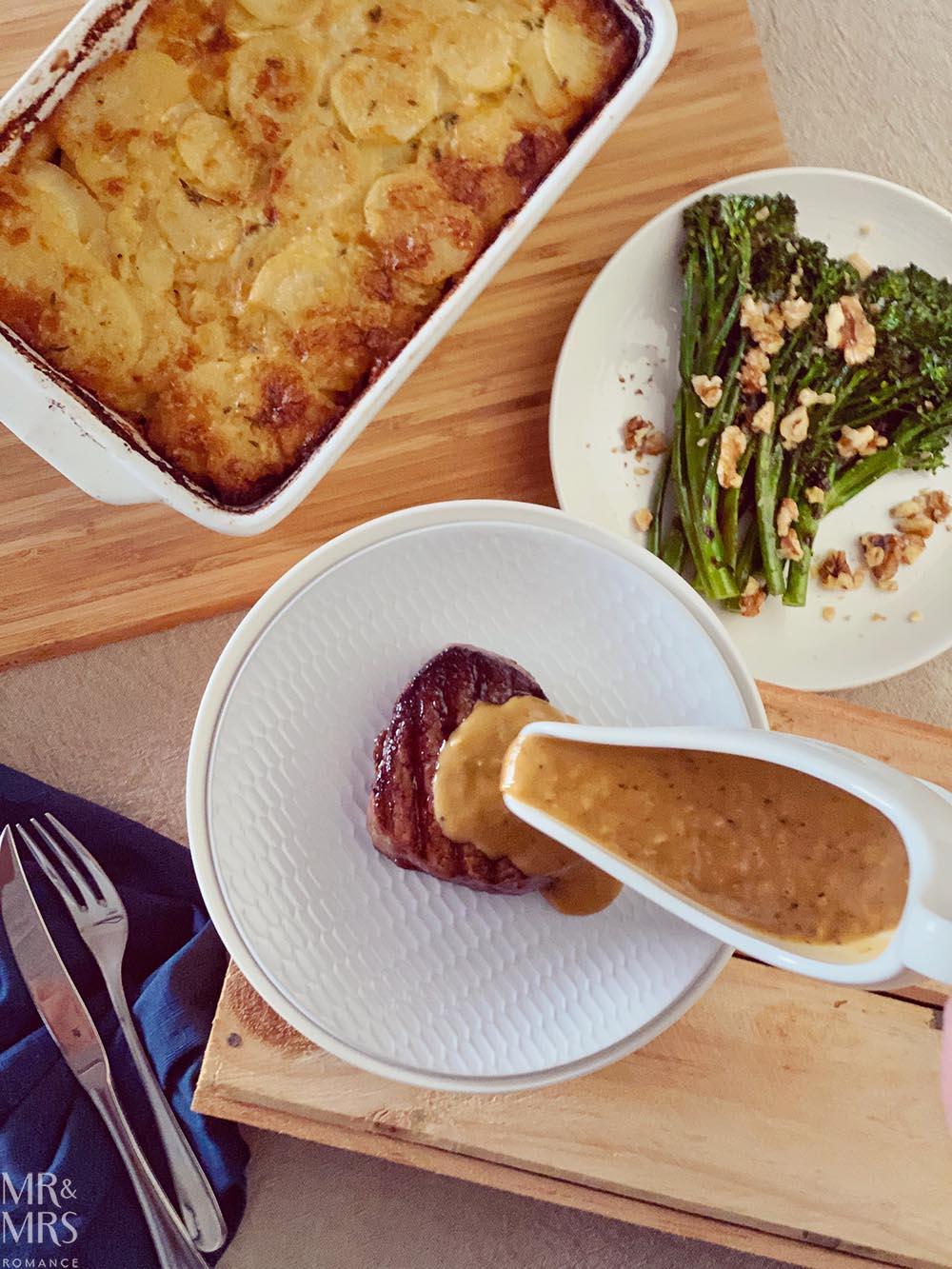 The Sauce by Manu

Manu’s sauces are the perfect way to give a real chef’s touch to this meal.

There are six to choose from – peppercorn, mushroom, red wine, lamb and rosemary, white wine, and mustard – and all you have to do is heat them through in a pan.

We tried to peppercorn sauce with our steaks and it was excellent. There’s a real depth of flavour that’s always missing from other shop-bought sauces and that would take hours to make at home (plus real talent). 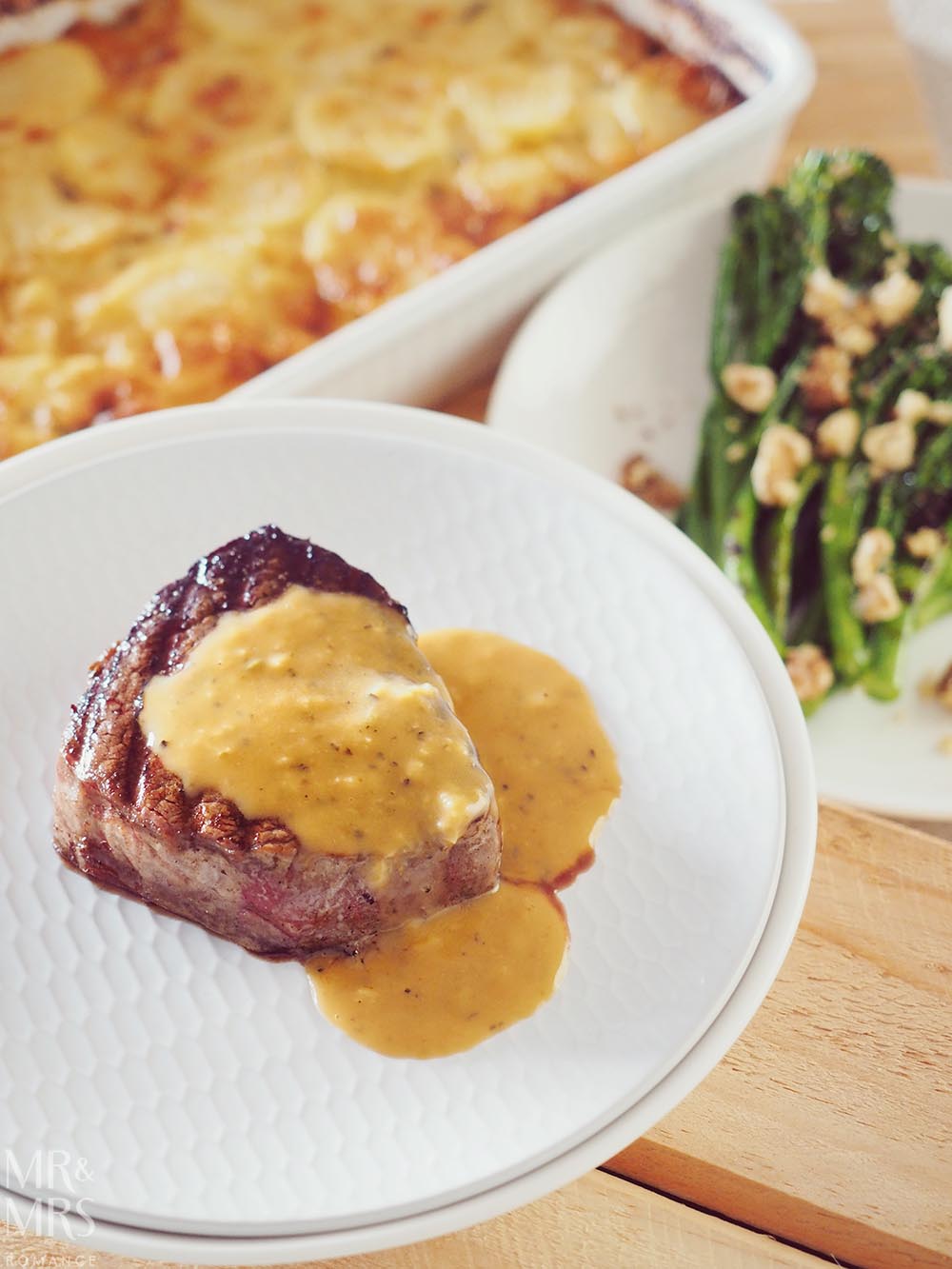 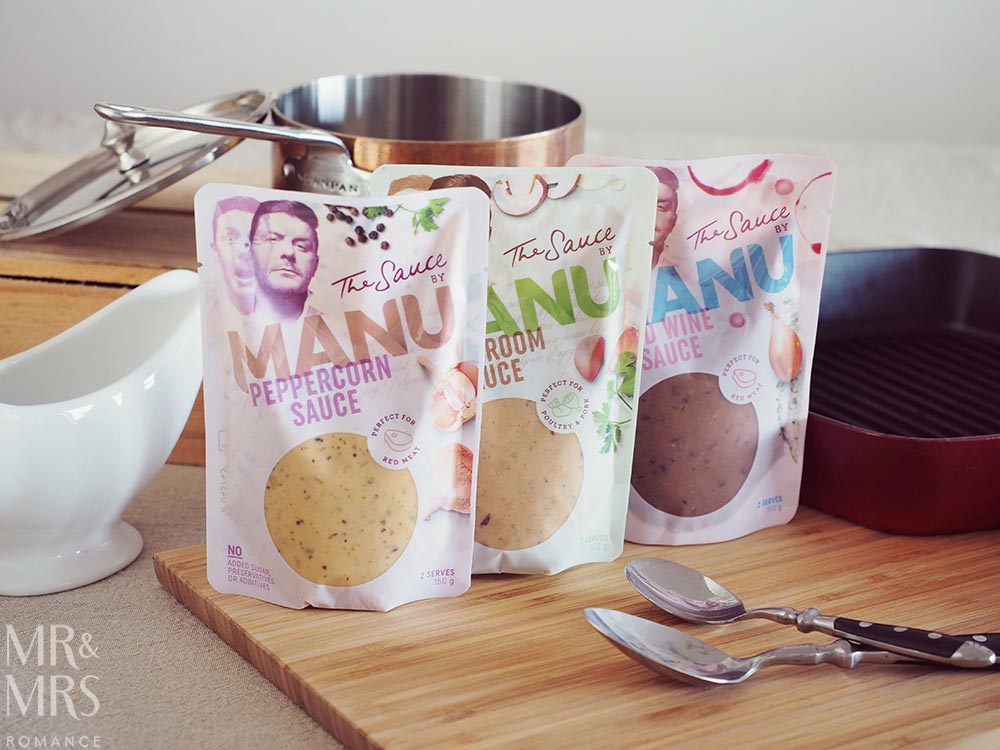 Because these sauces all have fresh ingredients – including cream – in them, you’ll have to hunt them out in the chiller section of your supermarket.

I have to give credit to our friend Maevadi for the idea of putting crushed walnuts with the broccolini. A stroke of genius.

As for the potato dauphinoise, Manu’s recipe is remarkable.

I honestly thought my roast potatoes were the pinnacle of what could be done with potatoes. This dish has proven me wrong. 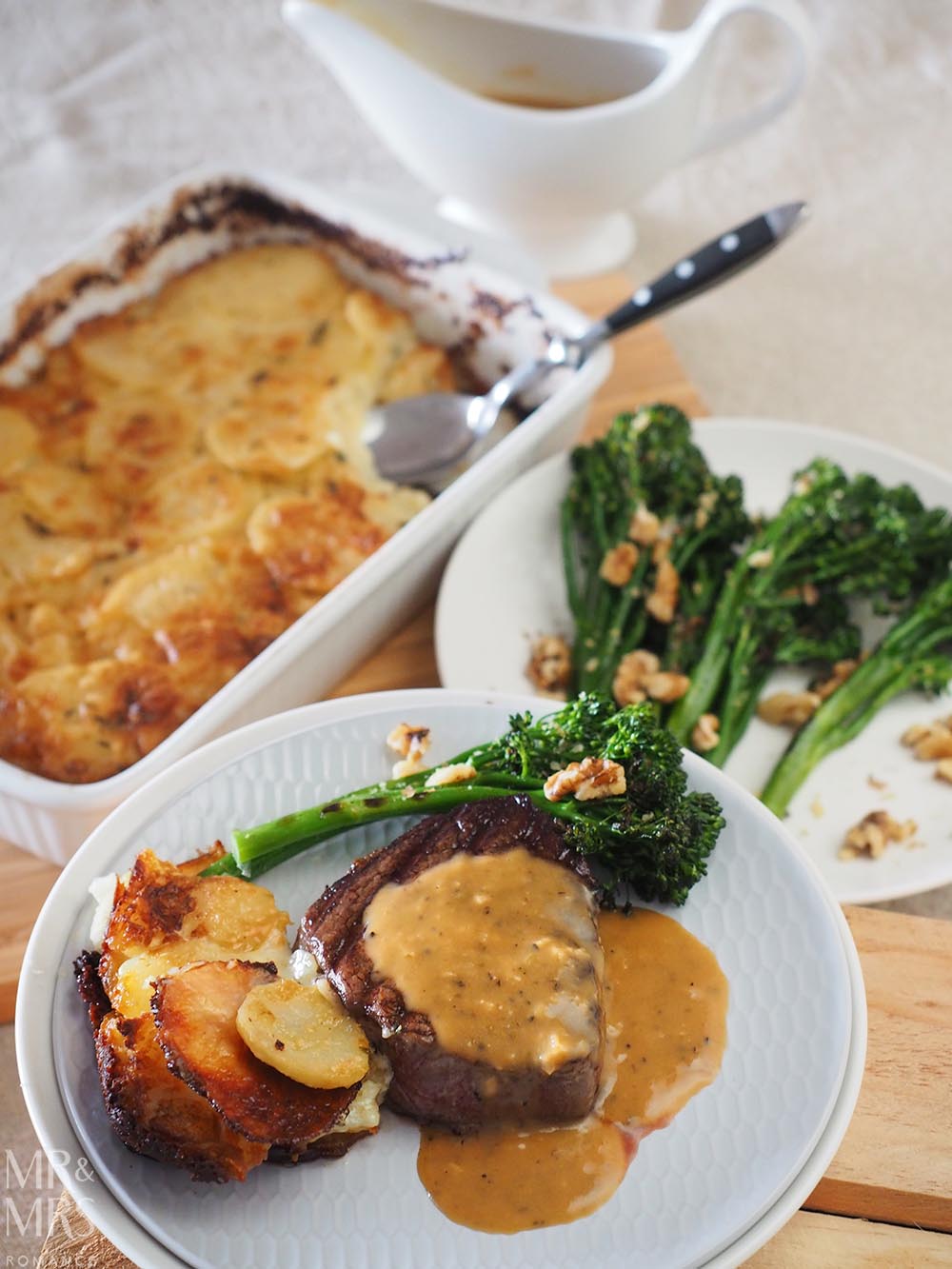 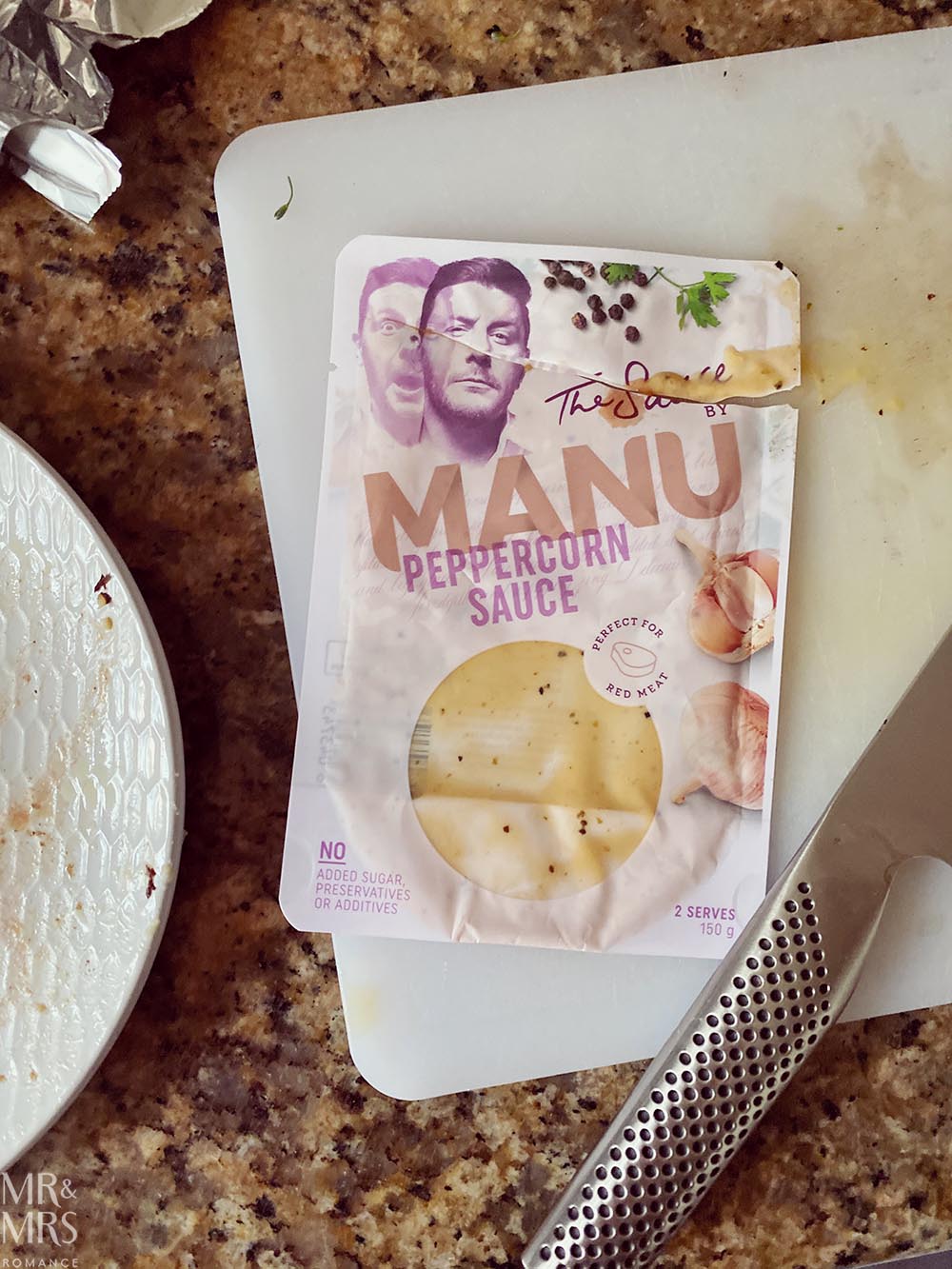 We were gifted samples of The Sauce by Manu and ingredients for this meal.