The humble burger has been around for over 100 years. Although its origins have yet to be attributed to one individual, the culmination of more that a century of practice has led us to this great moment in culinary time: my top 10 burgers of all time. The ultimate in patty lore. 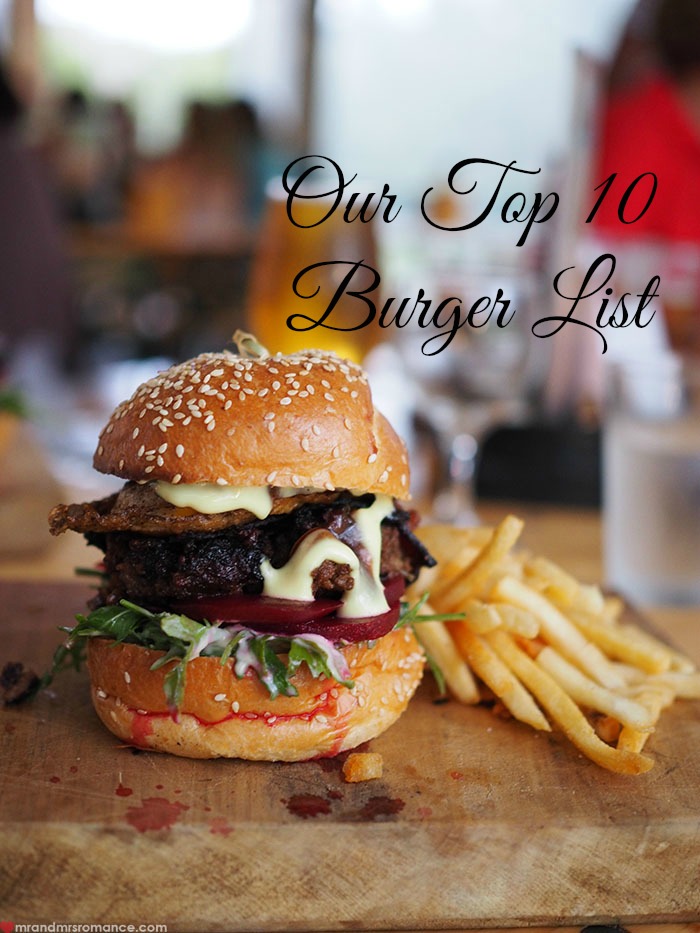 I’ve eaten a lot of burgers. My mates all nod and smirk, but it’s true. I’ve even been down the dark road of meat substitute burgers and survived (some of them are actually pretty good).

But this is a meat-only list. I’ve tried to be as objective as possible with my ratings. This means I haven’t included any post-midnight meat lusts where my own hand was looking pretty tasty.

It also does not – and never will – include Maccas or Burger King.

My benchmark burger – the one I set all other burgers against – is not on the list either. They don’t make it anymore so it would be a bit like saying ‘go and see a unicorn, it’s the best animal… oh wait, you can’t, can you.’

This ultimate burger – my burger muse if you will – was consumed in Chicago in a Sullivan’s Steakhouse. Sadly they don’t make this particular burger anymore, so the perfect burger – the 11/10 Sullivan’s blue cheese burger – passed into legend.

But the rest of these meat-based marvels are all still available and worth trying for sure!

Our Top 10 Burgers from around the World: 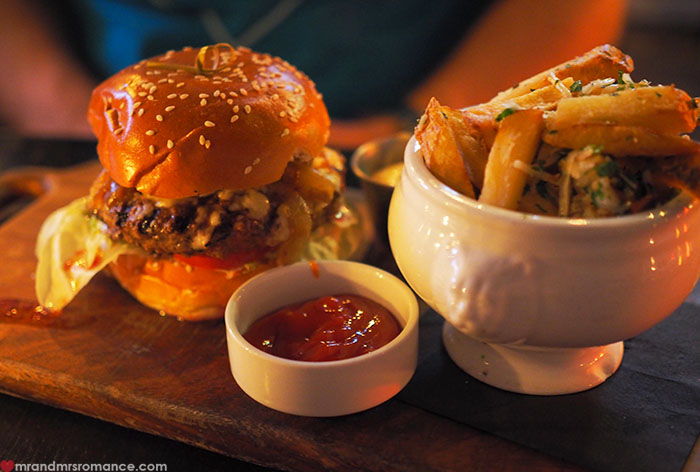 When we first sat down in Pearl’s after a long 14-hour flight from Sydney, we weren’t expecting to be greeted with this wonderment in a bun.

The sign of a good burger is how quickly it disappears. And this was gone in about 45 seconds.

Everything about this burger is perfect. The juicy patty, the melty cheese, the quantity of relish and salad, the crunchy pickles. Perfect.

The bread is softer than a cloud and the fries are crisp and perfectly seasoned, topped with grated parmesan.

But the most amazing thing about this burger is what happens after you’ve finished it. It’s a juicy burger and not one you’d attempt on a date. But after you’ve eaten it and you’re hands are once again wiped clean, they’ll feel softer and younger than they have for years.

The collagen from the burger revitalises your hands. It’s a miracle burger! 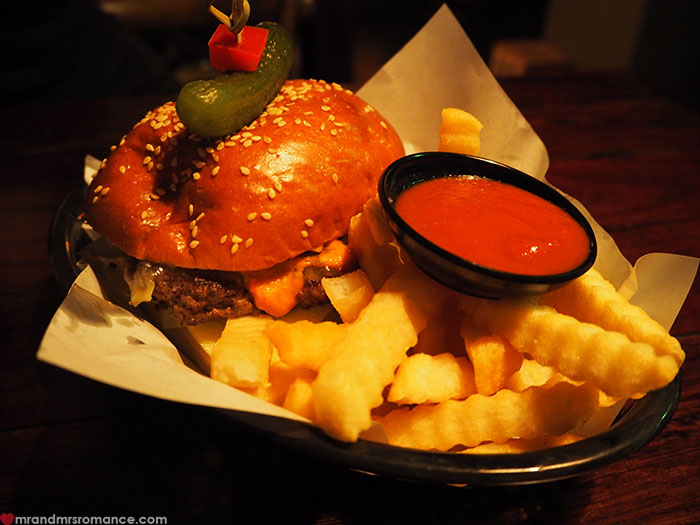 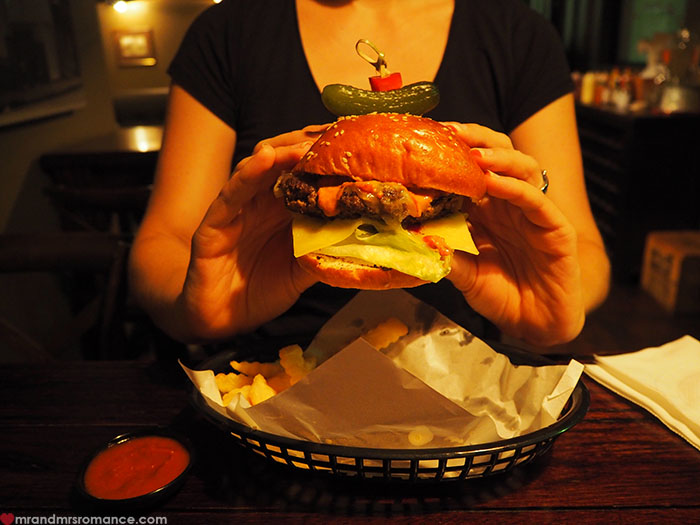 Once sporting a delicious selection of dumplings, the Royal Albert Hotel has moved into the realms of burgerdom. And what a move.

Their Royale with Cheese (best ask for it spicy) is an exceptional burger. However, recently the Royal Albert has somehow improved on what is essentially the best burger in the southern hemisphere.

The Double Bacon Cheeseburger is a thing of wonderment. 400g of beautiful burger meat, multiple slices of cheese, thick-cut smoky bacon, pickles, and a soft, fluffy brioche bun. And best of all, you can get this big, beautiful bastard with spicy sauce too!

Interestingly, the spicy sauce they use here is in fact the chilli sauce served with the dumplings they still serve. It sounds weird, but by god it works! And it goes really well with the fries too.

Oh, I nearly forgot about the fries – as if this burger couldn’t get any better, the fries are none other than crinkle cut. Genius! 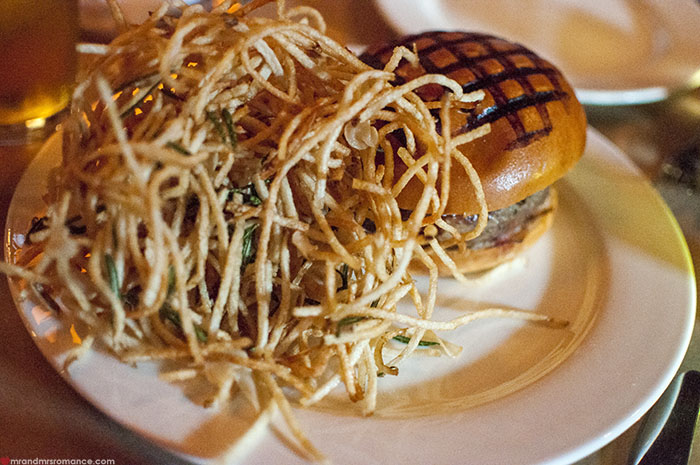 This place is exactly what you’d expect from a bar in the coolest part of the coolest town in the world that has the backing of a famous rapper. That’s right, the Spotted Pig is owned by Jay Z.

But the important thing is the burger is pretty bloody magnificent.

It’s the simplicity of this burger that makes it so good. A big, fat patty, a bit pink in the middle (medium-rare to order), with your choice of cheese in a pristinely grilled bun and you’re done.

The huge bird’s nest of superfine fries is a great novelty – and they’re tasty enough, but they’re a bit tricky to eat if I’m honest. 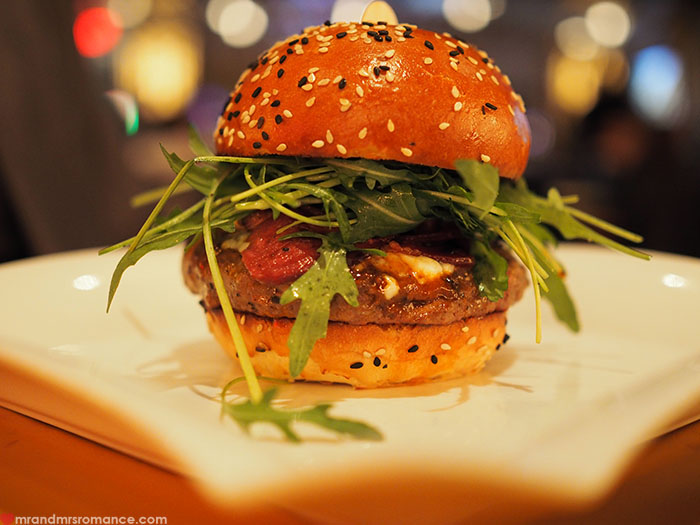 I have to admit I’ve got a soft spot for this abusive, money-obsessed, crinkle-faced swearer, so when we found Gordon Ramsey’s BurGR in Vegas, we just had to try it.

From the well-seeded squishy bun to the surprisingly light coloured and very uniform burger patty, you realise this is more than an artisan burger. This thing’s been crafted to match the glam and glitz of Vegas.

But don’t let that put you off.

I demolished my blue cheese burger – packed with rocket and a touch of smoky tomato relish – in minutes.

The flavours of the grill were prominent in the patty – the kitchen uses a mixture of apple and alder wood on their wood-fired broiler. And then there were the fries.

You’ve got a choice of sweet potato, truffle and Parmesan, or regular fries, all of which will make you go weak at the knees. 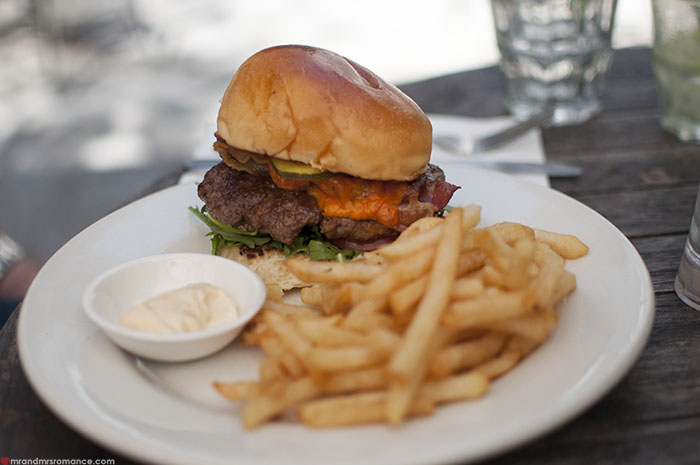 It’s often from the hidden depths of a city that you find the best food. This café in Sydney’s inner west pumps out some amazing food.

The Goblin Burger comes in a beautifully soft bun that looks like it’s going to be inappropriately crusty. You can see the patty has been made by hand from its crispy uneven edges.

I love this because it gives the burger an awesome added texture. This is from pressing the burger on the grill, making the juices caramelise (called the Maillard reaction).

What little space is left in the lightly toasted bun is taken up with a small blanket of rocket, house made pickles, crisp thinly sliced bacon and a kind of smoked capsicum sauce that’s delicious.

You get an ample stack of fries – though I think if Goblin followed the Royal Albert’s lead and got in some crinkle cuts, they’d have trouble getting rid of me! 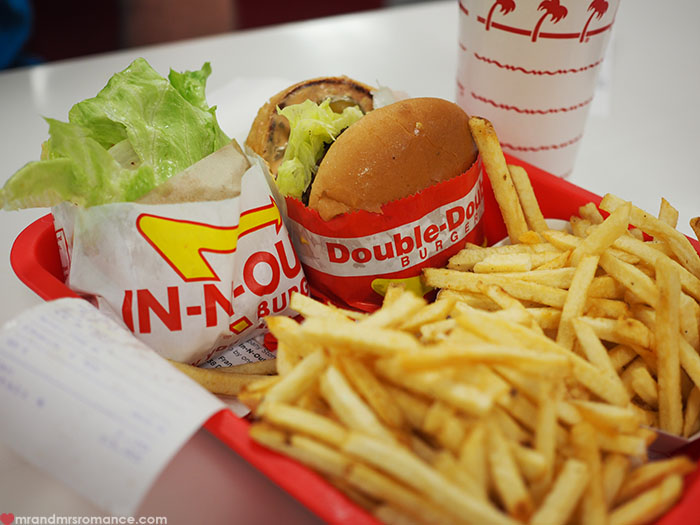 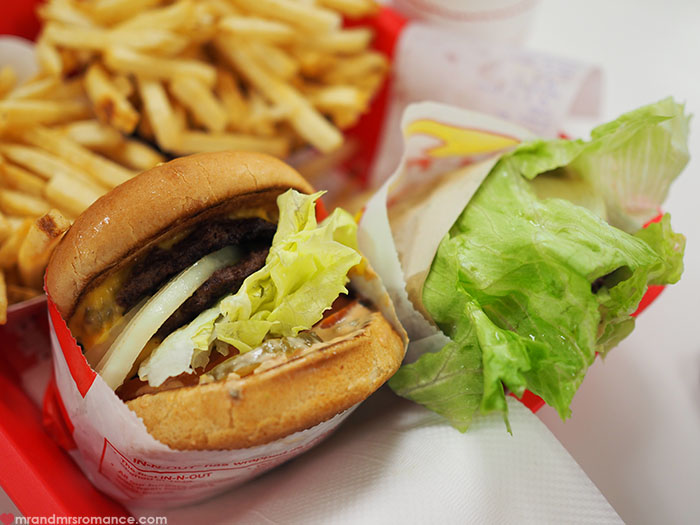 Only found in California (and a couple of isolated outposts in places like Vegas), In N Out Burger is a small chain offering the American dream in burger form.

I know it’s a chain, but it’s so far above what MacDonald’s or Burger King can ever offer. Their meals actually look like the pictures they advertise and the customer service is amazing – especially as there’s no tipping culture in takeaway joints like this.

The Double Double is a burger with two patties and two serves of cheese. This is the ideal ratio of meat to bun. You can get the 4×4, but that just ain’t right!

The burger itself is awesome. Soft bun, well-sauced and -seasoned patties, plenty of pickles and a wealth of salad. You can ask for extras like more onion or extra cheese too.

As for the fries, you get a huge amount. I don’t think their fries are the best. Even when they’re fresh they taste a bit stale. However, you can ask to have sauce and pickle put on them and they come out like delicious chip nachos!

Trivia: Almost every branch of In N Out has two palm trees growing across each other somewhere on the premises as decreed by founder, Harry Snyder. 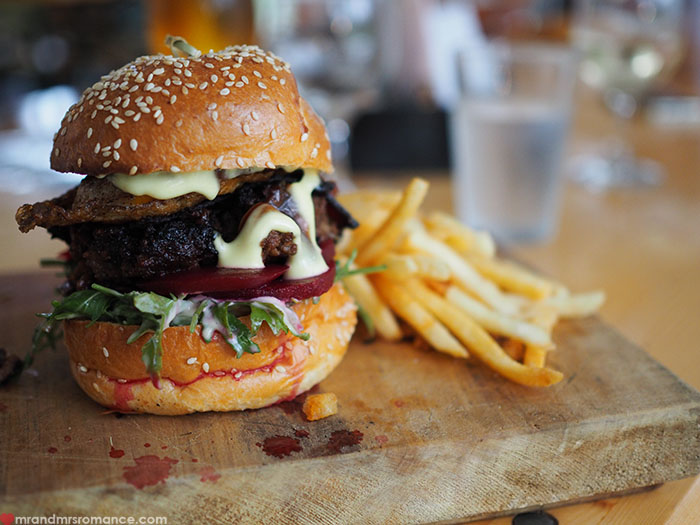 Pretty much miles from anywhere, Murray’s Brewery is a little piece of foodie heaven.

Of course they sell the beer they brew there, but Murray’s also use their beer in most of the recipes on the delicious menu.

The Man Burger is absolutely stunning – and the first time I’ve really appreciated the Australian obsession with putting beetroot in their burgers. Perhaps it’s the Aussie beer they use, I don’t know, but the beetroot works really well here.

The crispy maple spiced bacon, the rocket, the caramelised onions, the enormous flame-grilled patty, and the fried egg come together to make the ultimate Aussie burger. And the special mayo is pretty bloody sensational too.

One major reservation though is the cost of this bad boy. It’s the most expensive burger in the list by quite some way at $25 a pop. 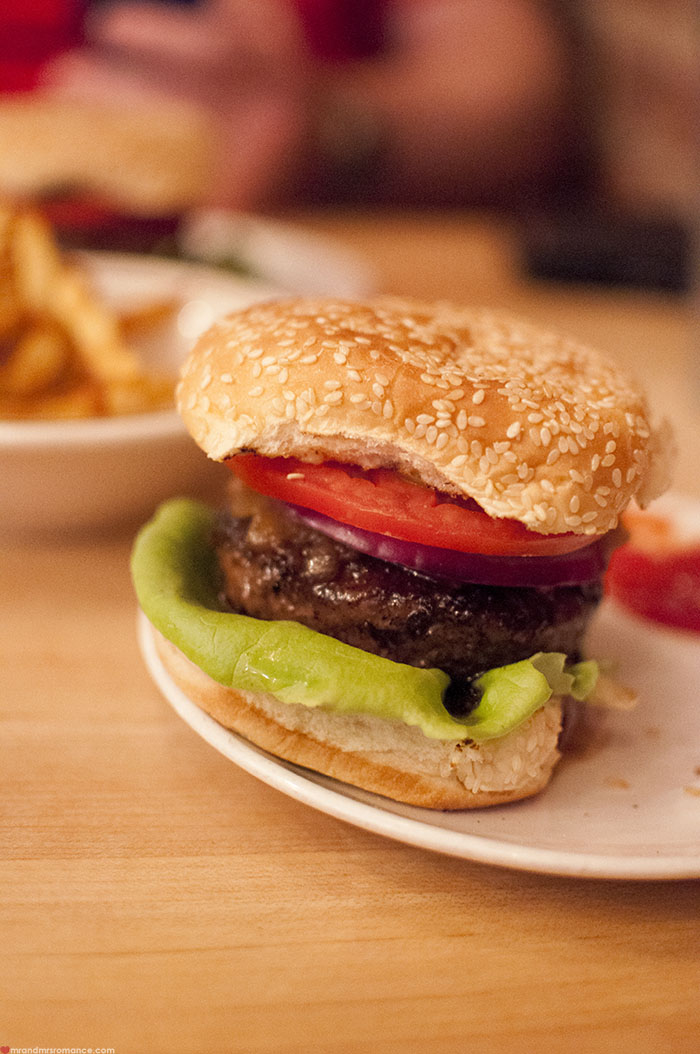 It’s pokey, plainly furnished and as old school as a ‘50s diner. The burgers here though are boss.

The star of the show at Whitman’s is the Juicy Lucy. In its small, sesame topped bun, with just enough surface area for a single cos lettuce leaf, relish, a slice of tomato and a few rings of raw red onion.

Almost as wide as it is tall, this diminutive burger holds a secret within. When you bite into it, you realise it’s a cheeseburger – the cheese has been stuffed inside the patty. Insane yet delicious.

It’s called the Juicy Lucy for a very good reason though. By the end of the meal, your plate’s swimming with burger juice. 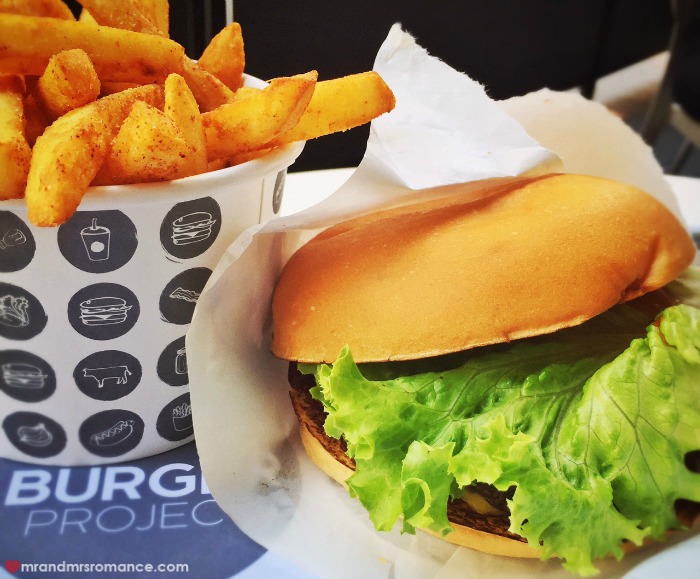 Neil Perry – one of Australia’s premier celebrity chefs – has done a great job with his own version of a burger bar. Known for the Asian influence in his food, it’s a surprising change of tack.

But the burgers speak for themselves.

The beef patties are perfectly cooked with just the right amount of charring on the edges. Mrs Romance had the American Cheese in the Burger in a Bowl – much like In N Out’s Protein Style in two large lettuce leaves. I think she chose wisely.

I had the Cheese & Bacon in one of the Burger Project’s buns. The buns are so smooth they look fake, but they taste great.

Unfortunately, the bacon was a bit flabby – if it had been a bit crispier, I’d have liked the burger more over all.

Still worthy of the top 10. 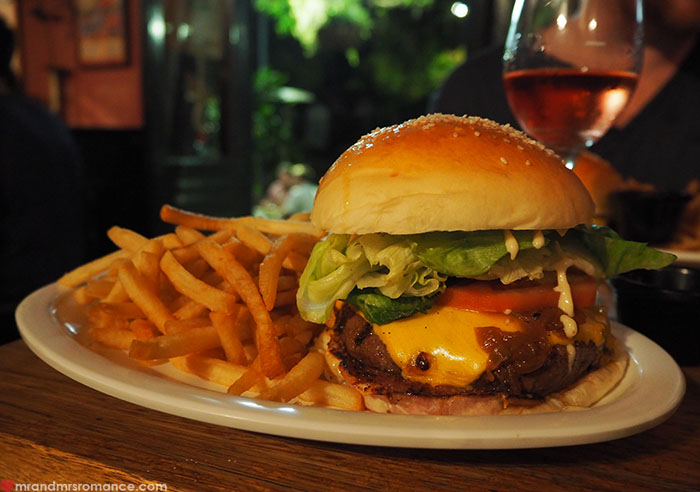 I’ve been going to the Lord Wolseley for over 10 years but this is the first time they’ve had such a good menu.

Pub Life Kitchen, who have set up in this – reputedly the smallest bar in Sydney – have created quite a stir with their burger range.

The cheeseburger is excellent – a solid, straightforward burger – and the bacon cheeseburger is also well worth a crack. We did find that we could taste the burgers a long time after we’d eaten them (not in a good way), and the chips weren’t great.

But for flavour these guys have definitely something to bring to the table!

Where do you go for a good burger? Do you have an ultimate burger experience? Tell us in the comments!

PS. I know it’s not the best pic but I thought you’d like to see what the unicorn of burgers looked like. 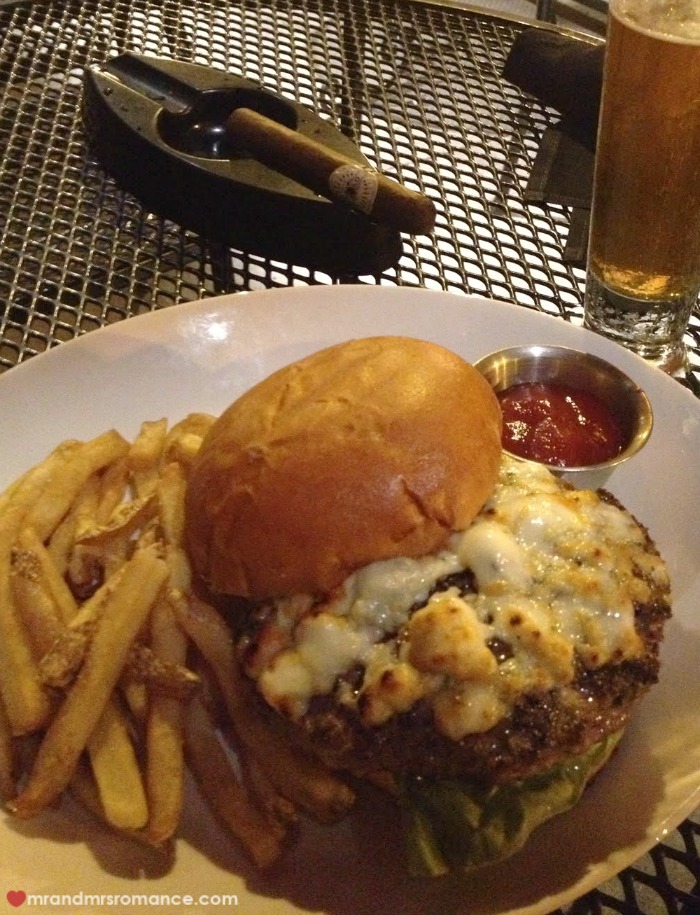 Can you age white wine?

When you think of cellaring wine and keeping it for years to age, your mind probably goes straight to red wine. But what about…