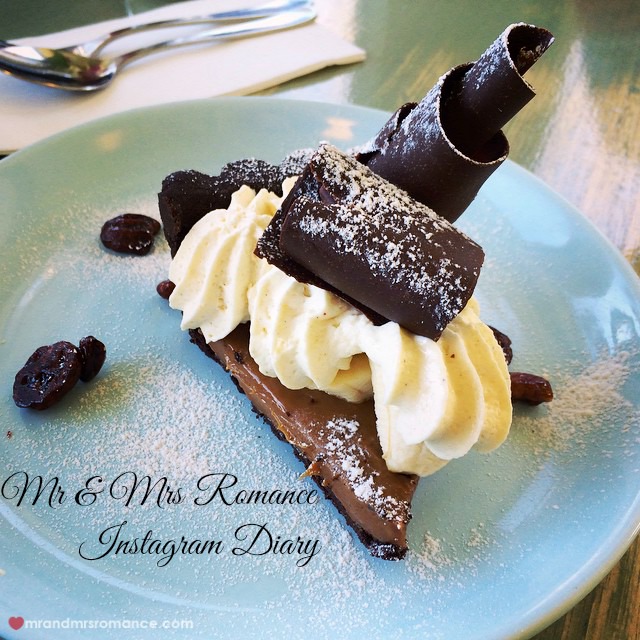 Happy birthday to Jeanette – Mrs Romance’s mum! This cake is one of the delicacies being devoured as part of the birthday celebrations at Burnt Orange in Mosman. How tasty does this look?

We’ve got a busy week planned. I’ve got an extraordinary trip to Perth happening while Mrs R is working hard back here, then we’re both off west over the mountains to a little town called Mudgee. After that… well, who knows? 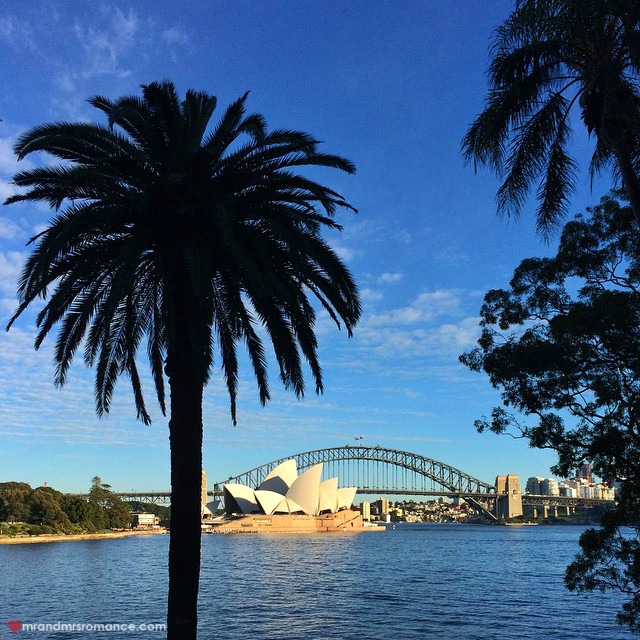 Mrs Romance is up early today – out for her morning excercise. Up while the shadows are still quite long, the views over Sydney Harbour are – as always – spectacular. 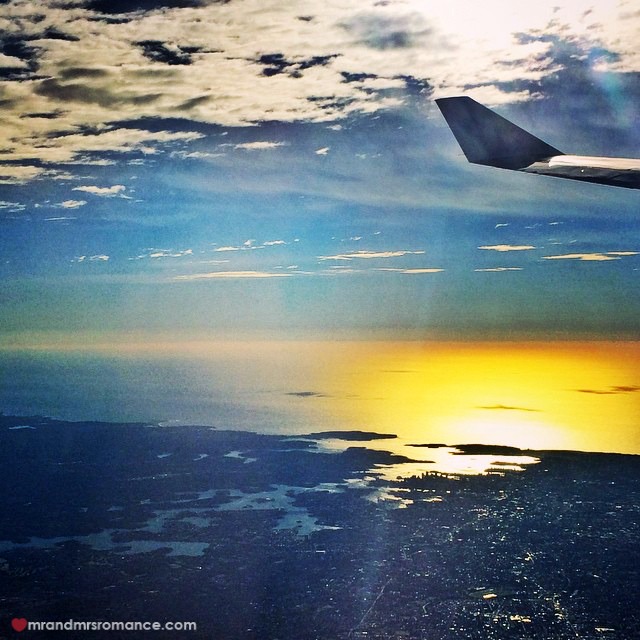 Meanwhile, I’ve been up for quite some time. I’m off to Western Australia on a special mission! Even after we’ve taken off, the sun’s still low in the sky and the harbour city looks very small down there.

Next to me in seat 36A is Jarrod from Nip of Courage. We’re going to Perth to pay homage to the opening of Australia’s latest whisky distillery: Whipper Snapper Distillery in East Perth is currently making moonshine at its best. 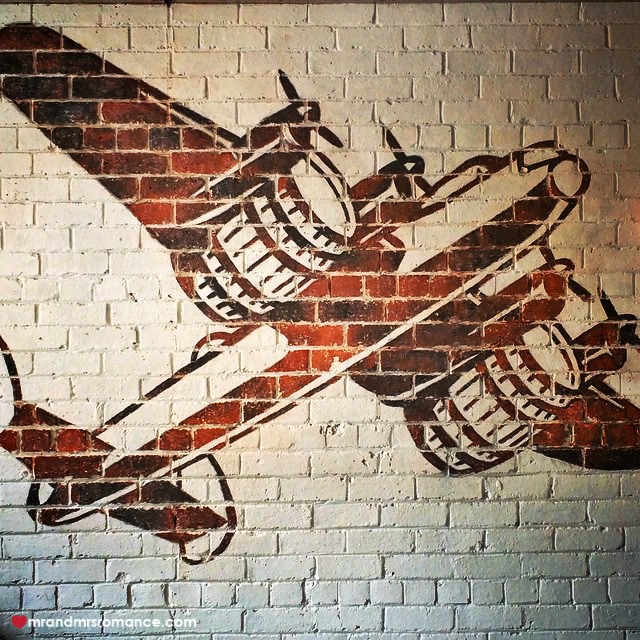 Whipper Snapper’s branding is awesome – this design is on the distillery wall, where there’s a little tasting bar and also where you can pick up a pretty good coffee.

This B52 bomber was chiselled out of the paint by a comissioned artist to expose the brick below. 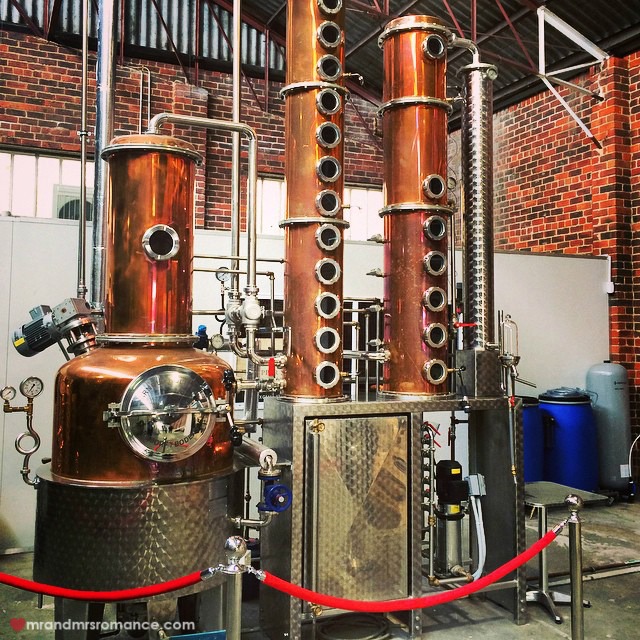 And here is the belly of the beast. This copper still produces all of Whipper Snapper’s marvelous medicine. Jarrod and I get to have a good look around the distillery – it’s a pretty slick set-up. But this is still the most impressive part of it all. 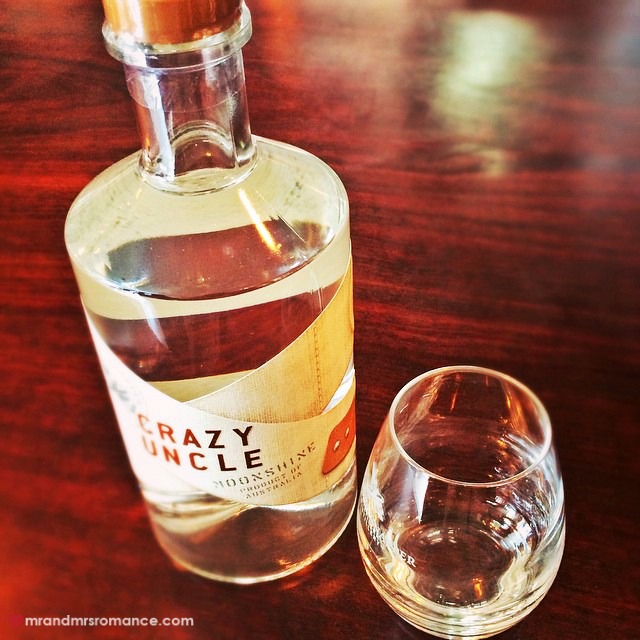 And this is what it all boils down to, so to speak. Crazy Uncle Moonshine. It’s made from Australian-grown wheat, maize and barley, and even better, there’s an oak-aged moonshine about to hit the shelves soon too.

The name Crazy Uncle came from a night of heavy ‘research’ when owner Alasdair and head distiller Jimmy were talking about how everyone has a crazy uncle. But they deduced if you don’t have one, then you should probably have a careful look in the mirror!

If you want a bit more information on how the opening went (and to see me with Lord Mayor of Perth – Lisa Scaffidi), click here. 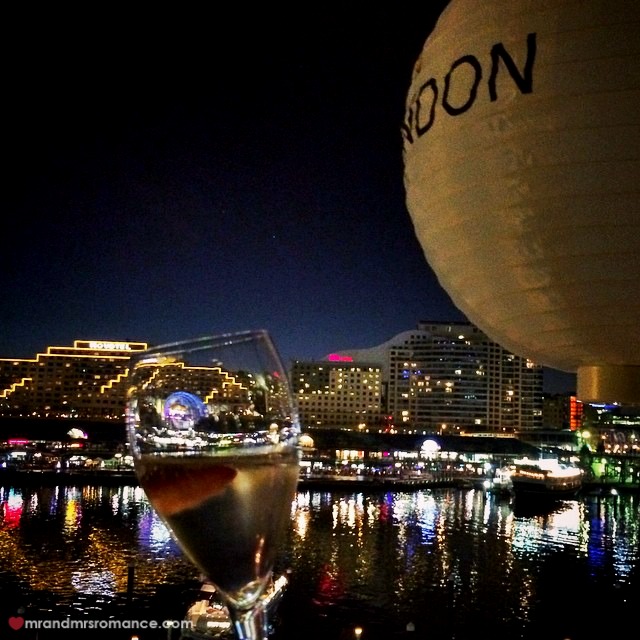 I’m back from Perth and we’re out again! This time, Mrs Romance and I are in the beautifully located Cafe del Mar in Darling Harbour. We don’t usually wander around this way – it’s a bit touristy – but the view is worth it on its own. And now there’s a new Sparkling Hour session every Thursday 6-8pm thanks to Chandon. 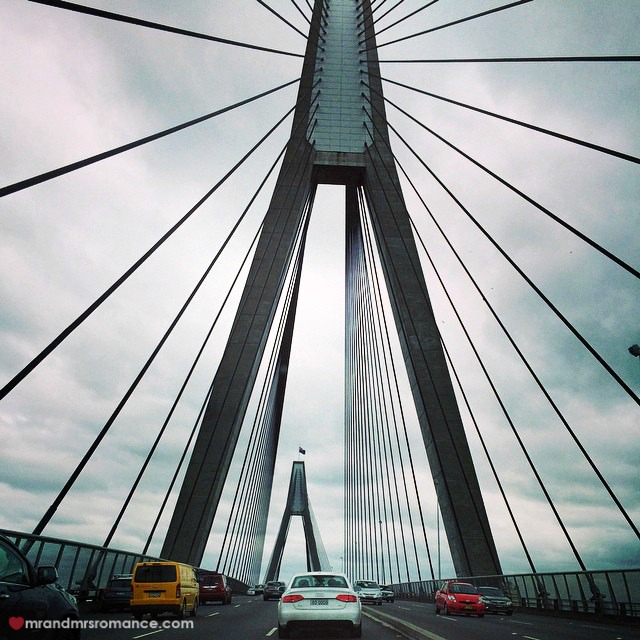 We’re off as early as possible today – we’ve got a long drive ahead of us. This morning we head west over the Blue Mountains to a town called Mudgee. It’s a bit out of the way, but it’s developed quite a reputation as a foodie hub in recent years.

We’re quite excited for a couple of reasons: apart from it being a chance to get out of the city for a couple of days, Mudgee’s famous annual Food & Wine Festival starts tomorrow. The area around Mudgee is abound with fresh produce and – best of all – wine grapes! 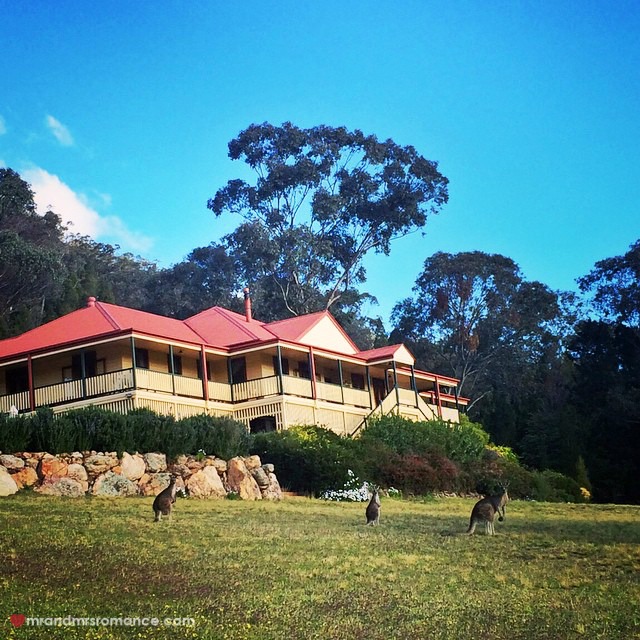 This is our first chance to lay eyes on our digs for the weekend. It’s called the Mudgee Homestead Guesthouse and if nothing else, the guard kangaroos makes us feel very safe indeed!

This place is just awesome! We can’t wait to bring you the full review of this place – we can’t speak highly enough of it. Watch this space for more ins and outs, and some great behind-the-door photos too. 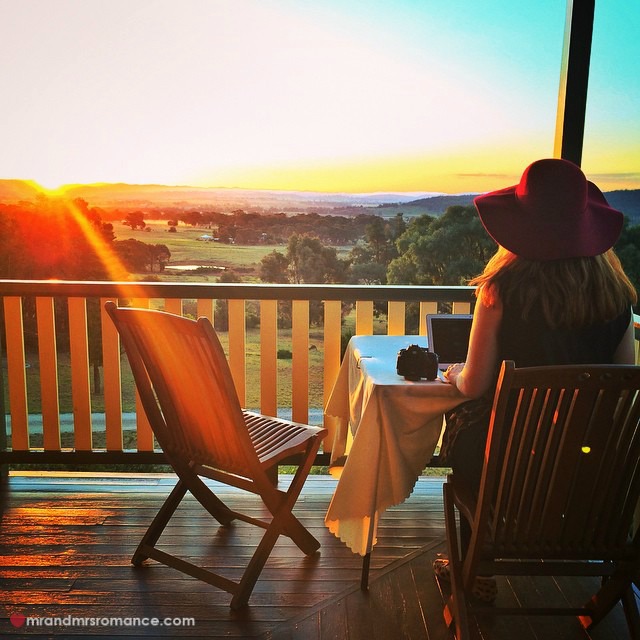 One of my favourite photos of this weekend – it’s our first night here and Mrs Romance is busy blogging away in the last embers of the sunset. This is just from our balcony in the Homestead – we really are spoilt here. 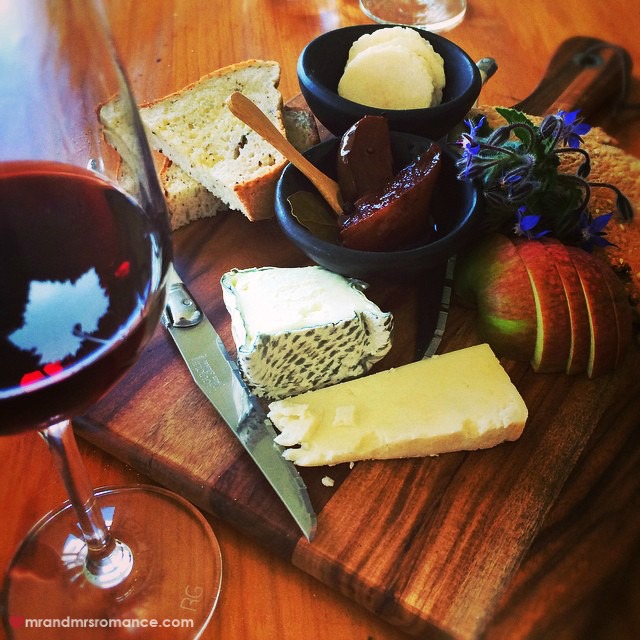 We’ve managed to book in for a long lunch at The Zin House – the dining element to Lowe Wines. And when they say long lunch in Mudgee, they really mean it. This 7-course degustation has taken us almost 3 hours to get through!

This is the penultimate course: an ashed goat’s cheese and the softest, most complex cheddar I’ve ever tasted. We’ve decided to go with the matching wines for the meal. It’s proven to be a very good idea! 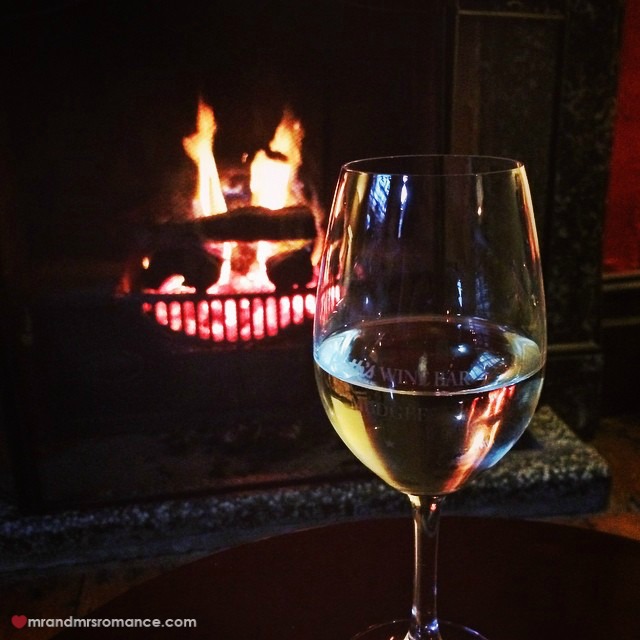 Even though it’s been the biggest day of food and wine we’ve ever had (we also visited a whole host of wineries and shops around the area today), we just had to come and have a look here. This is  Roth’s Wine Bar. It’s held the same liquor licence since 1923 – the longest in the country.

Inside, the place has as much personality as wine on its walls… that’s a lot by the way.

We’ve scored one of the few free areas in the place – right next to the open fire. It’s a total score, but we can’t hang around. Even if we could fit another drink in, we’d be very much in the way. Roth’s is about to host one of the biggest wine sessions in the Food and Wine Festival. Out the back, they’ve moved all the furniture and replaced it all with hundreds and hundreds of bottles of wine.

For $40, you can try every single wine if you like… we’re simply just too full. So we head home. Besides, there’s a board games cupboard in the Homestead with our name on it! 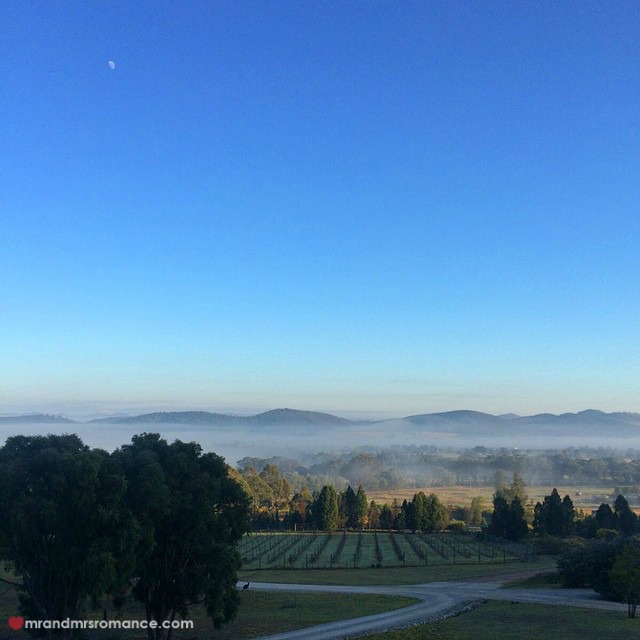 In spite of yesterday’s over-indulging and today’s prospective marathon drive, we’re up early. The mists pooling in the valley create quite a mystical outlook – even the roos aren’t up at this time… not that it matters. Kangaroos in the Mist – it doesn’t have that same Dian Fossey feel, does it? 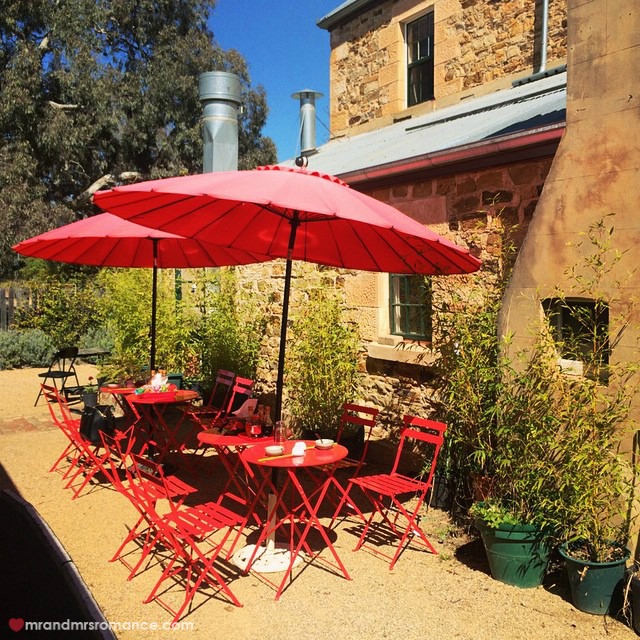 We’re finally on the road – but before we get too far, we’ve decided to stop for a refuel. About half an hour from Mudgee is a beautiful town called Rylstone. In Rylstone is a little place called 29 Nine 99. It’s run by Na Lan – a lovely Chinese lady who makes her own dumplings to traditional recipes and serves them in a yum cha style.

Now, we’ve had a lot of yum cha – and if you want to read more about yum cha in Sydney, here you go. But this is something else.

We’re really worried actually. There’s a good chance that this experience in 29 Nine 99 will have wrecked our future appreciation of dumplings for ever. They’re insanely good. If you’re ever in the area – within 100km radius – make your way to this place. It’s incredible! And look at the setting, for goodness sake! 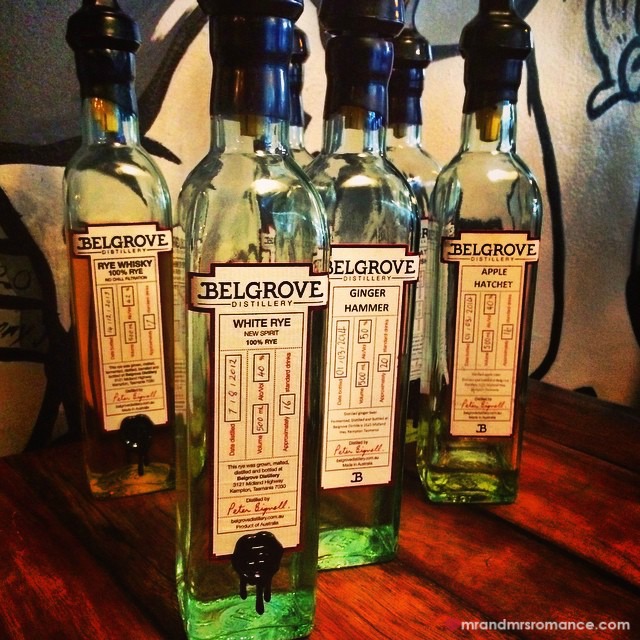 We hoon it back to Sydney just in time to drop the hire car off and make our way to Black Penny in Surry Hills. This cool little speakeasy is hosting a barman’s brunch where Peter Bignall is showing off his range of whisky – Belgrove Distillery. This guy is as clever as a brain pie – his products are without a doubt world class.

We’re lucky enough to meet him and try some of his limited release stuff. The Apple Hatchet is a Calvados-style spirit made of distilled apples (unbelievably good) and the Ginger Hammer is the result of him getting too much ginger for ginger ale he wanted to make. He distilled what was left with a spot of chilli and this spicy, tasty spirit is quite something.

I mustn’t forget to mention his special release peated rye – the first of its kind by all accounts – and an oat rye. He’s sold out of both of these, but Peter has promised me he’s busy making more!

We’ve managed to muster just enough energy to get back home where we’re now trying to prepare for the coming week. It’s not going so well!

How’s the start to your week now? Do you play board games when you’re away? Which one’s do you go for? Have you tried any Australian whisky recently? Tell us in the comments!

A new beer, the end of Rio and our last-minute travel preps

So that’s the Olympics over then. Another 4 years to wait for such an amazing sporting event… and for our TVs to be Shanghaied….