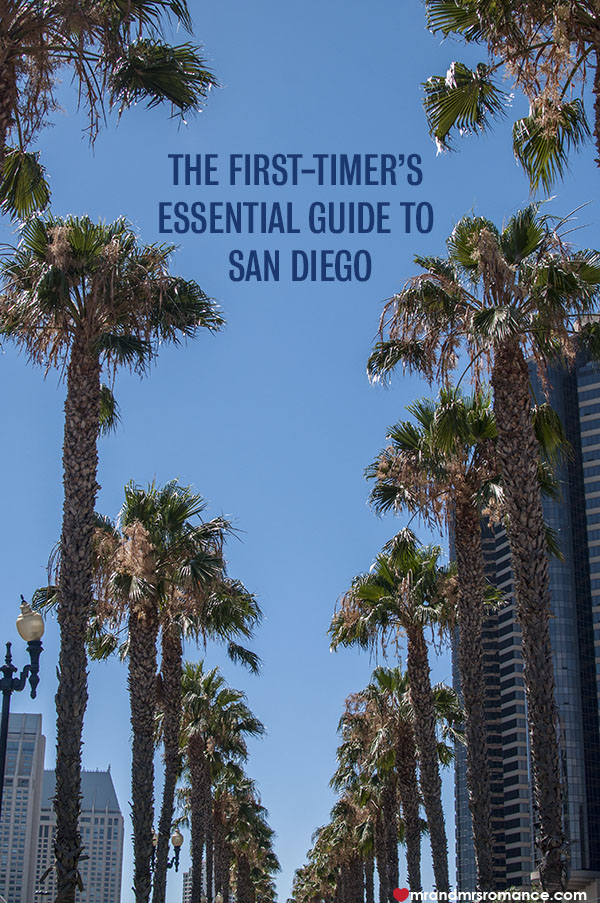 It’s a cliché, but like all clichés, there’s got to be an element of truth to it somewhere. A quintessence that provides the rule.

There’s nowhere else closer to this perfect visage than San Diego. It’s a happy city – a city in love! 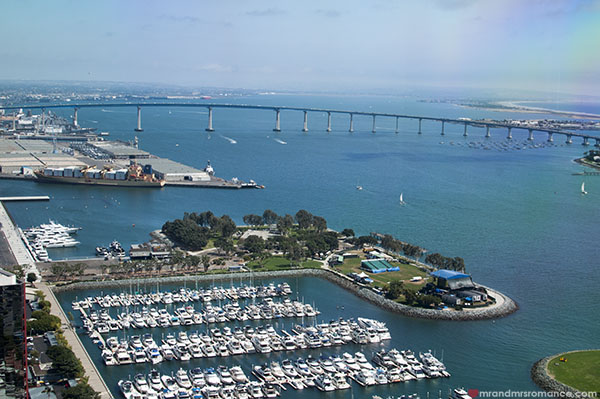 Even the weather’s perfect. San D has that desert heat – that perfect low humidity high temperature combo. And then cool evenings wake you up after a drowsy day at the beach or mixing it up downtown.

The happy San Diego locals are proud to announce they have the best weather in the States, and I think they’ve got a point. 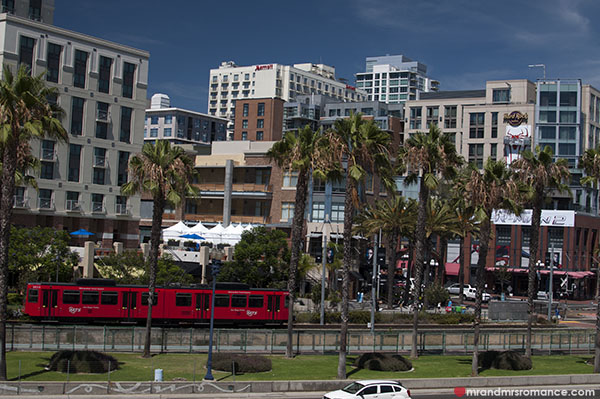 But it’s not just the weather that makes the locals so cheerful. Just a two-hour drive from the mad chaos of Los Angeles, San Diego’s wide streets are quiet and their polite drivers are happy to let pedestrians stroll out in front of them.

Even in the middle of the city you’re met with the calm smiley faces of locals who have the pick of things to do out and about their city. 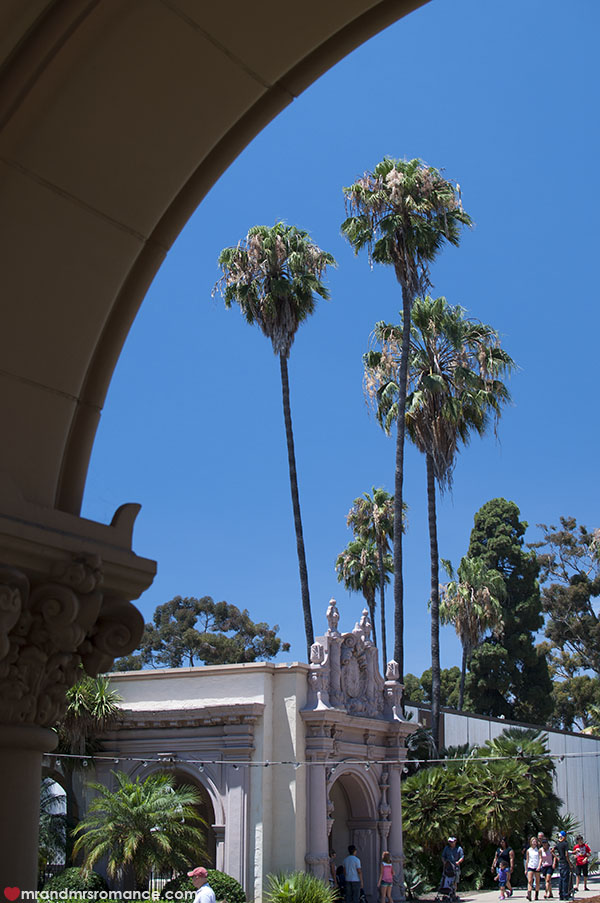 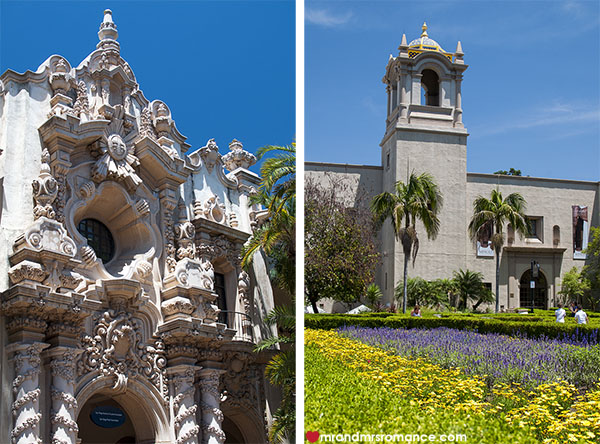 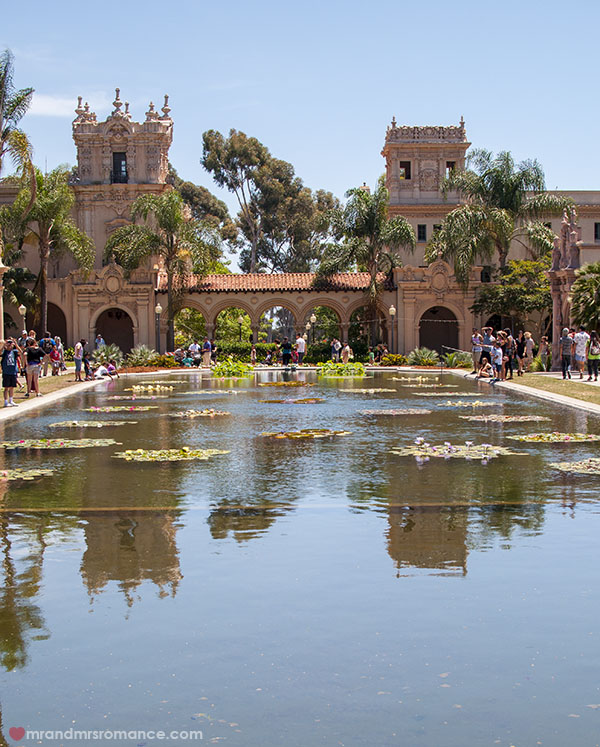 Balboa Park is an enormous reserve in the city that offers so many choices. Botanic Gardens, walking tracks, museums, galleries – and let’s not forget the world famous San Diego Zoo.

It’s a great spot to walk hand-in-hand with your other half – maybe even take a picnic with you!

Downtown and the Gaslamp Quarter 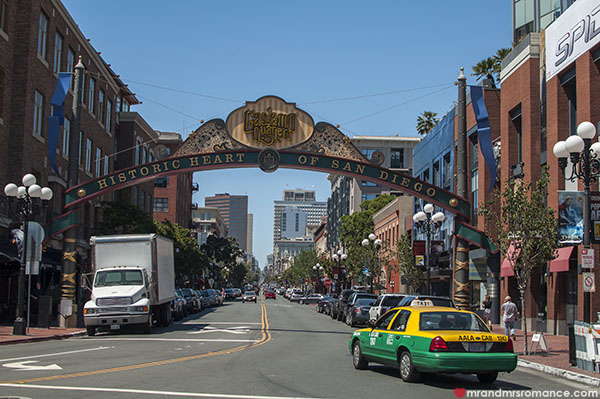 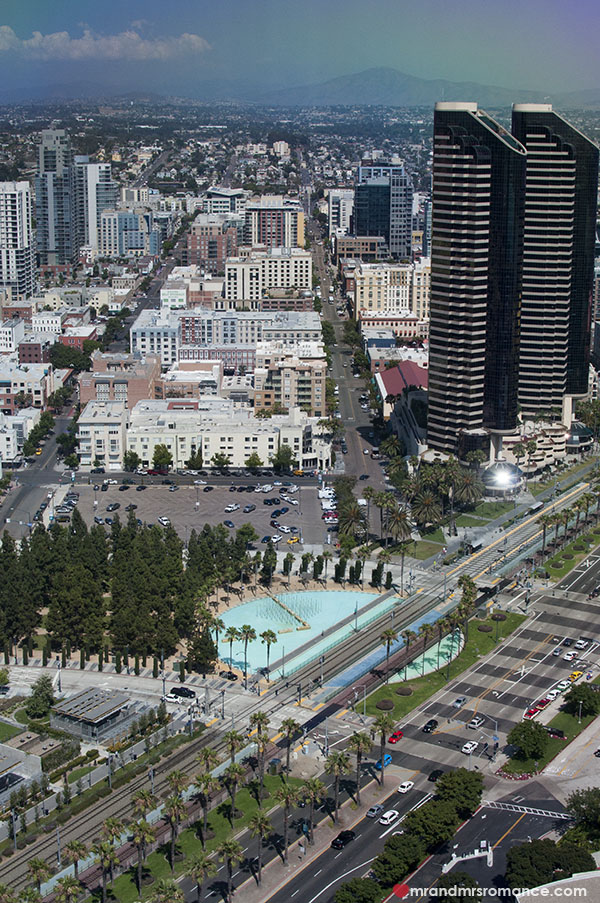 There’s lots to do here with bars, restaurants and shops – it’s great for watching the city go on its way over a margarita or two.

Like a lot of American cities, the downtown area is laid out in a grid format, so getting lost is pretty hard. 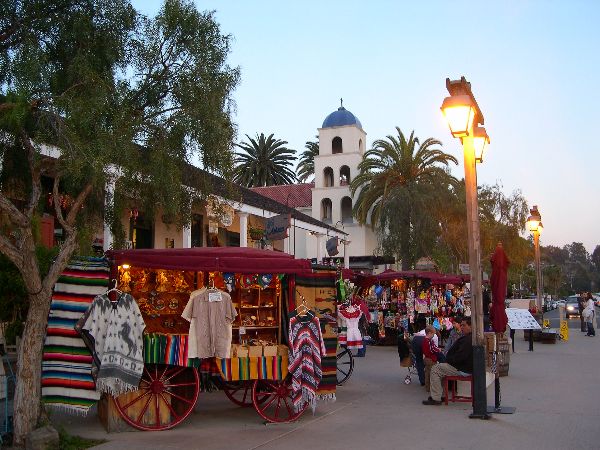 With Mexico on its doorstep, San Diego has a well-developed ‘hola’ culture. It’s never as clear as in Old Town. The main street is flooded with taco restaurants and burrito bars, and margarita madness is in full flow.

The restaurant we tried to get into had an hour’s waiting time. The place we ended up in was just as good. We had to share the mega margarita that Mrs Romance ordered, and it sorted us both out nicely! 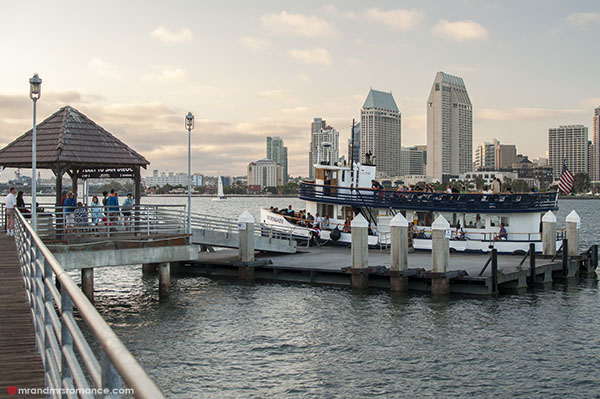 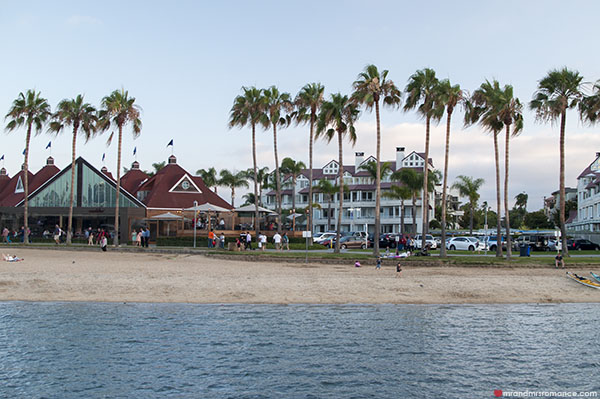 Off to the west from San Diego harbour, you can see this island devoted to holidays and luxury. The Coronado Bridge bends its way from the mainland to this haven of incredible houses, a great restaurant district and – on the eastern side of the island – just about the best view of the city you’ll find. 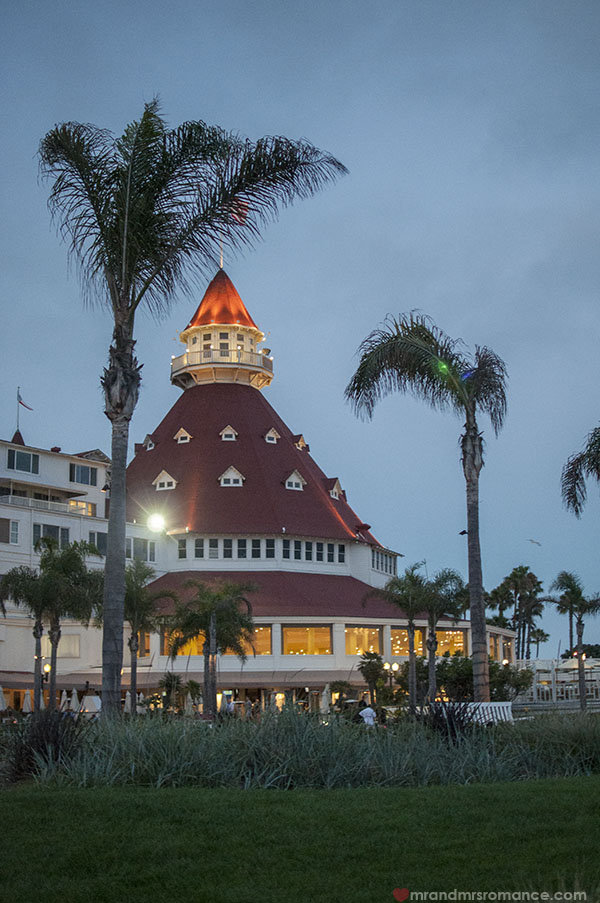 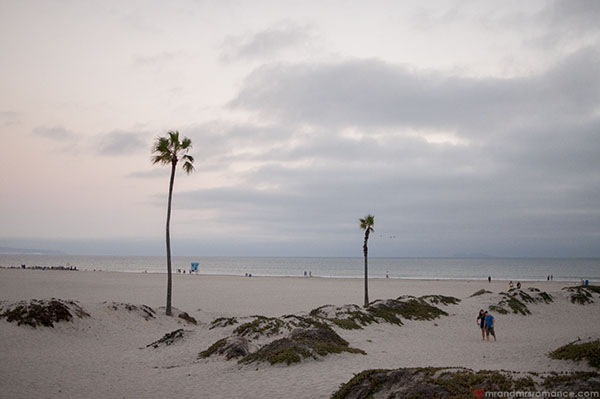 On the west side is Coronado Beach and its palatial resort. The sand here is white and soft, and the views of Mexico are pretty cool too. If you can, reserve your own fire pit and beach seats a romantic evening on the edge of the Pacific Ocean.

Locals’ secret: can you see where the grassy sand dunes spell out the name of the island on the beach? It’s easy to spot from the air!

Ocean Beach – known to the locals as ‘OB’ 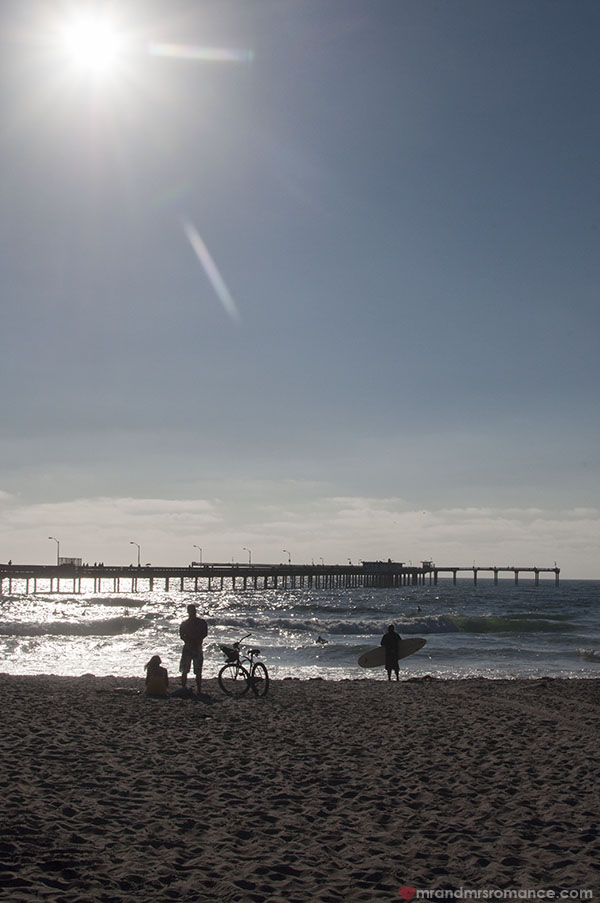 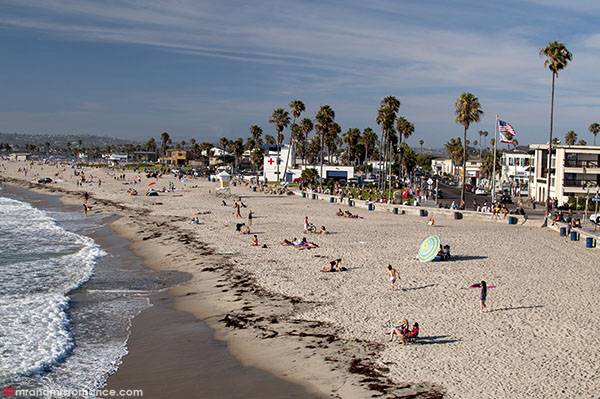 We also enjoyed the beach itself and a lovely walk along the fishing pier where hopeful anglers cast their lines. 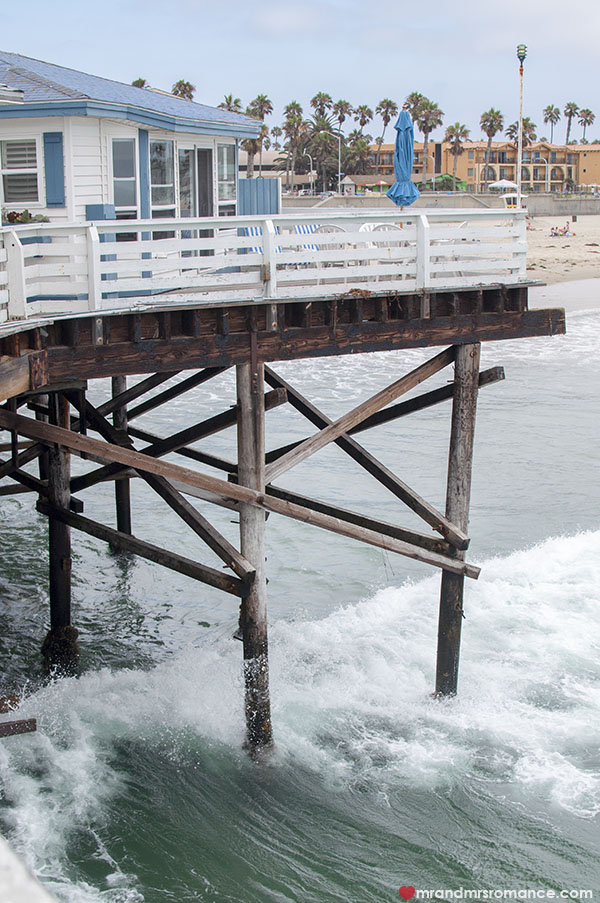 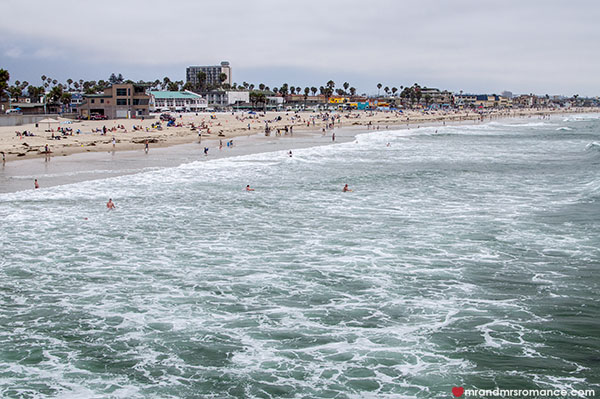 Go north a little way and you’ll find Pacific Beach, or PB to its friends. The beach itself is enormous and stretches north and south for miles. In fact, head far enough south and PB just gives up and Mission Beach takes over.

PB is a hustling bustling holiday hub and there’s plenty to do here. Hire bikes to ride the esplanade, sunbathe, or sit at one of the hundreds of bars and restaurants, and watch people doing their thing. You can even rent an over-water holiday home on the wooden pier as it stretches out over the Pacific!

Try to the PB Ale House for a killer burger and great craft beers. Monday night is the beer-and-burger special: WIN! 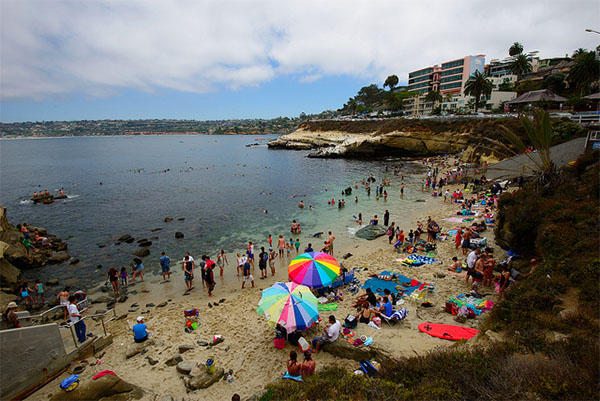 Pronounced ‘la hoya’, and known as San Diego’s ‘Jewel by the Sea’, this northern beach district is a rare place indeed. It boasts an unusual micro-climate where the temperature never dips below 50dF (10dC) or over 90dF (32dF). It’s also home to some stunning natural beauty, with a dramatic coastline surrounding three sides of this large peninsular.

The houses along this stretch of coastline are incredible too. It’s fun to imagine living in these expansive properties so close to such glorious beaches. 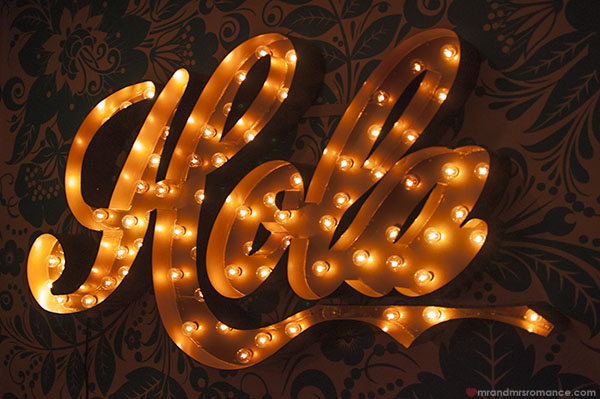 The food in San Diego is all pretty bloody good. There’s everything to choose from you’d expect in a city, but being so close to the Mexican border, tacos, burritos and margaritas are the call of the day.

The best thing about San Diego having such consistently good weather is the number of outdoor bars in the city. Our favourite is Altitude Sky Lounge a rooftop bar overlooking the harbour.

For a laid back dinner, you can’t beat El Camino in Little Italy. With its cantina style interior and packed little courtyard, we felt more like one of the locals than at any other time in San Diego.

The bizarre proximity to the San Diego International Airport’s flight path adds a unique element to your meal; score a table outside and watch the planes fly so close overhead you can feel the draft as they go past.

Tuesday is the most popular night here, mostly because it’s cheap taco night and margaritas are $3!

By the way, the tacos are good but get the California burrito. It’s incredible! 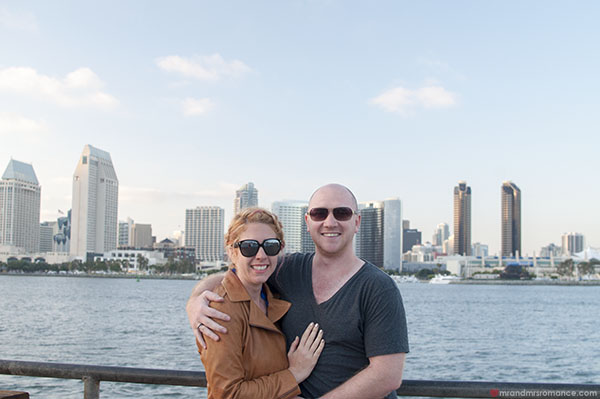 Due to different tobacco laws in San Diego, there are also lots of cigar and shisha bars in and around the city. Here’s our review of some of the San Diego cigar bars we liked.

San Diego’s a funny city – it feels like you’re in a small beach-side town, but with every little part you explore, you start to put the jigsaw together. Soon you realise San D’s a pretty big place.

Even so, with its heart so clear to see on its sleeve, you feel like you know the city from the moment you arrive to the point where it’s time to say a sad goodbye. We really miss you, San Diego!

What are your favourite pieces of San Diego?

Being able to relax in the calm of an airport lounge before your long-haul flight makes all the difference. But when you’re in the…