With its elevated view out over the jetty to the sparkling ocean, The Wharf Restaurant in Merimbula, NSW is the obvious choice for seafood lovers. But does its adjoining aquarium create a conflict of interest? 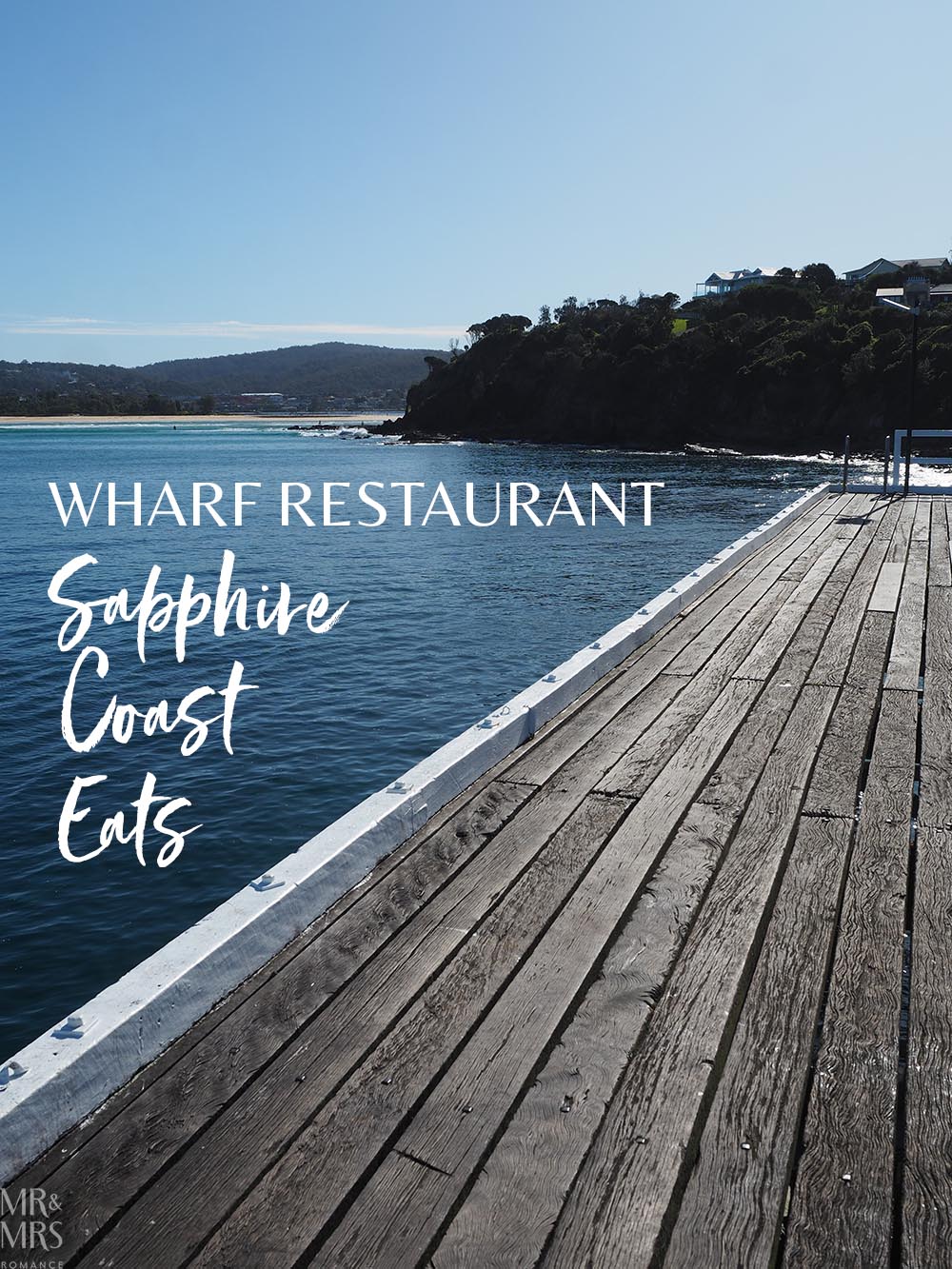 How would you feel about eating seafood in a restaurant that’s also an aquarium? Is it the perfect storm of self-promotion? Or could it be a case of—quite literally—eating into your profits?

As we sit at our window-side table in the Wharf Restaurant, which looks out over the beautiful bay of Merimbula in far south NSW, Christina and I ponder the dilemma.

Check out our video of The Wharf Restaurant and Merimbula Aquarium here:

Is it right to marvel at the incredible entities living beneath our waves while their brethren are getting dressed for dinner just one floor up?

Owners of both the Wharf Restaurant and Merimbula Aquarium since 2001, Sally and Anthony Daly are acutely aware of the dual-purpose potential.

In fact, Anthony jokes with us that with the market price for some of the fish in the tanks downstairs, dipping into the displays is a tempting prospect.

But he assures us none of the sea life from the aquarium ever ends up on restaurant plates. The fine line between seafood and sea life has always been a blurry one, but here at least it’s never erased.

Instead, the exquisite yet approachable food the kitchen serves and the fascinating displays in the 28 tanks belowdecks compliment each other.

And the marine biologists who offer tours here during the week add further context to this ‘dine-and-discover’ duplex. 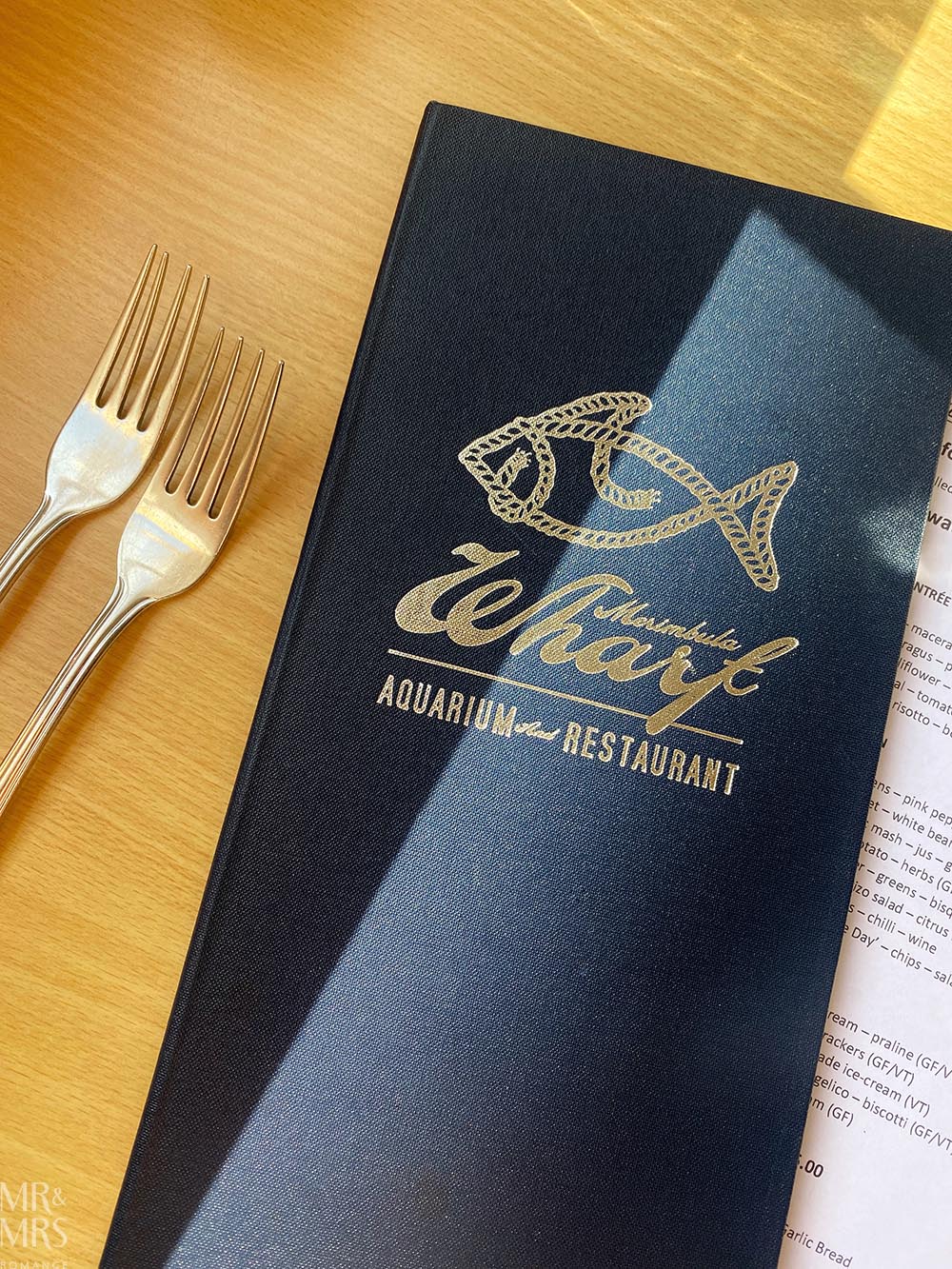 Lunch at The Wharf Restaurant

The lively, relaxed lunchtime vibe puts us at our ease as we wait for the kitchen to work their magic.

The menu is split between a two- or three-course lunch option, or a monster of a seafood basket for $160pp.

Our budget (and pants) won’t stretch to the seafood basket, so we go for two courses from the a la carte—although the delivery of oysters from Broadwater today has been delayed, which stops us gobbling down a dozen of the freshest Sydney rock.

Instead, we opt for some garlic bread, which you have to get when you come here.

Ciabatta halved and lightly toasted then loaded with so much garlic butter and parsley—we could eat a pile of this and die happy. 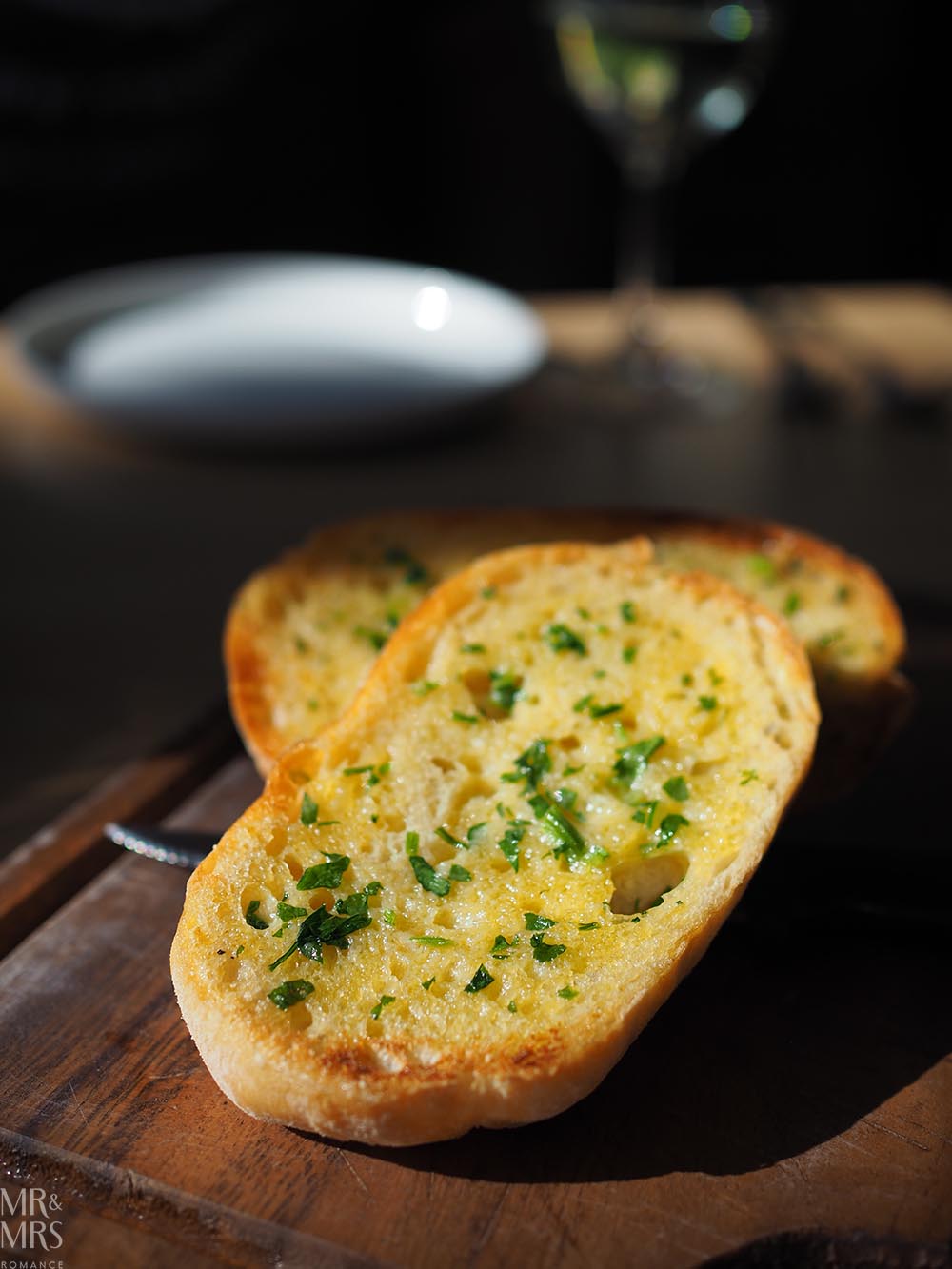 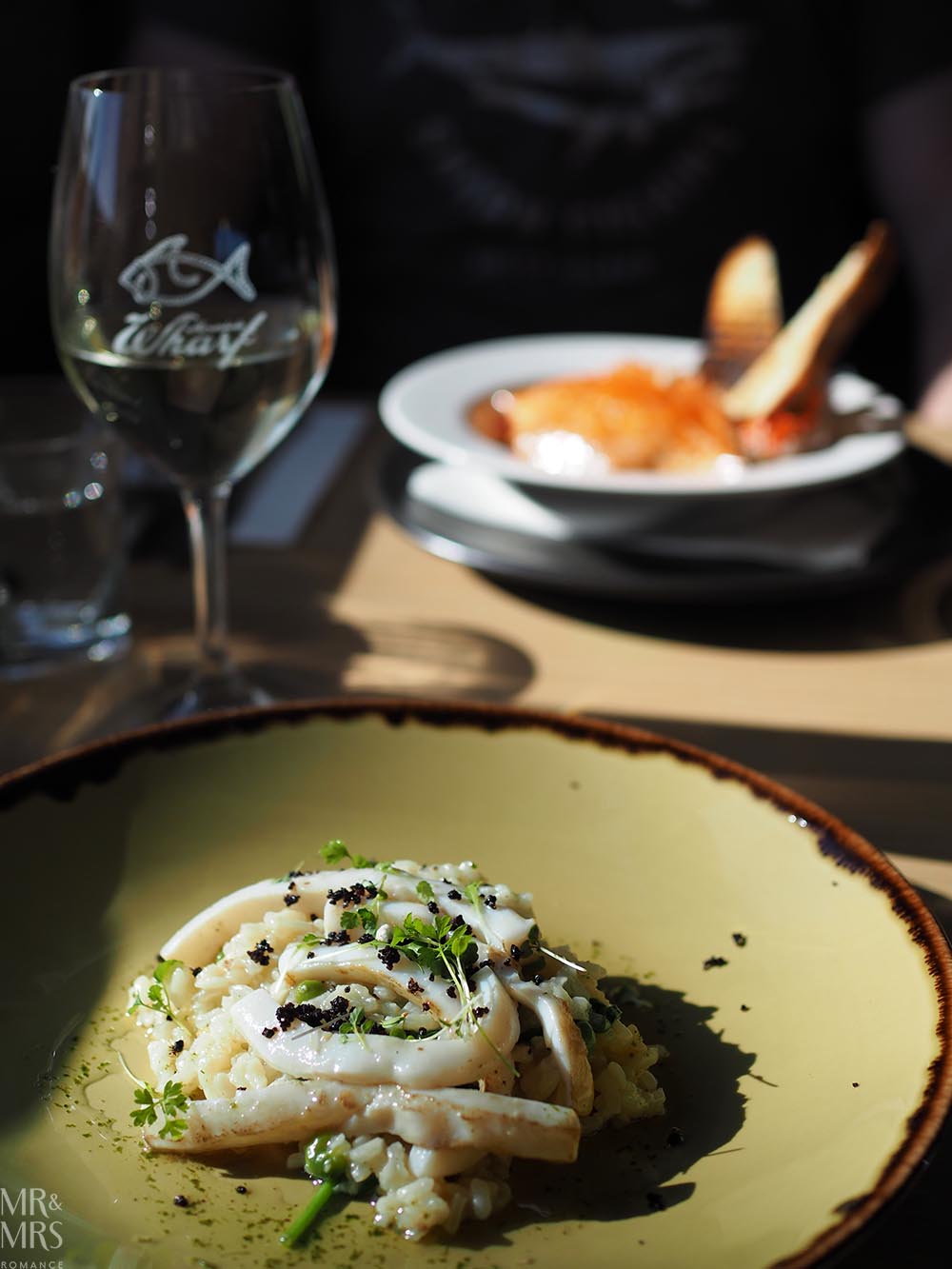 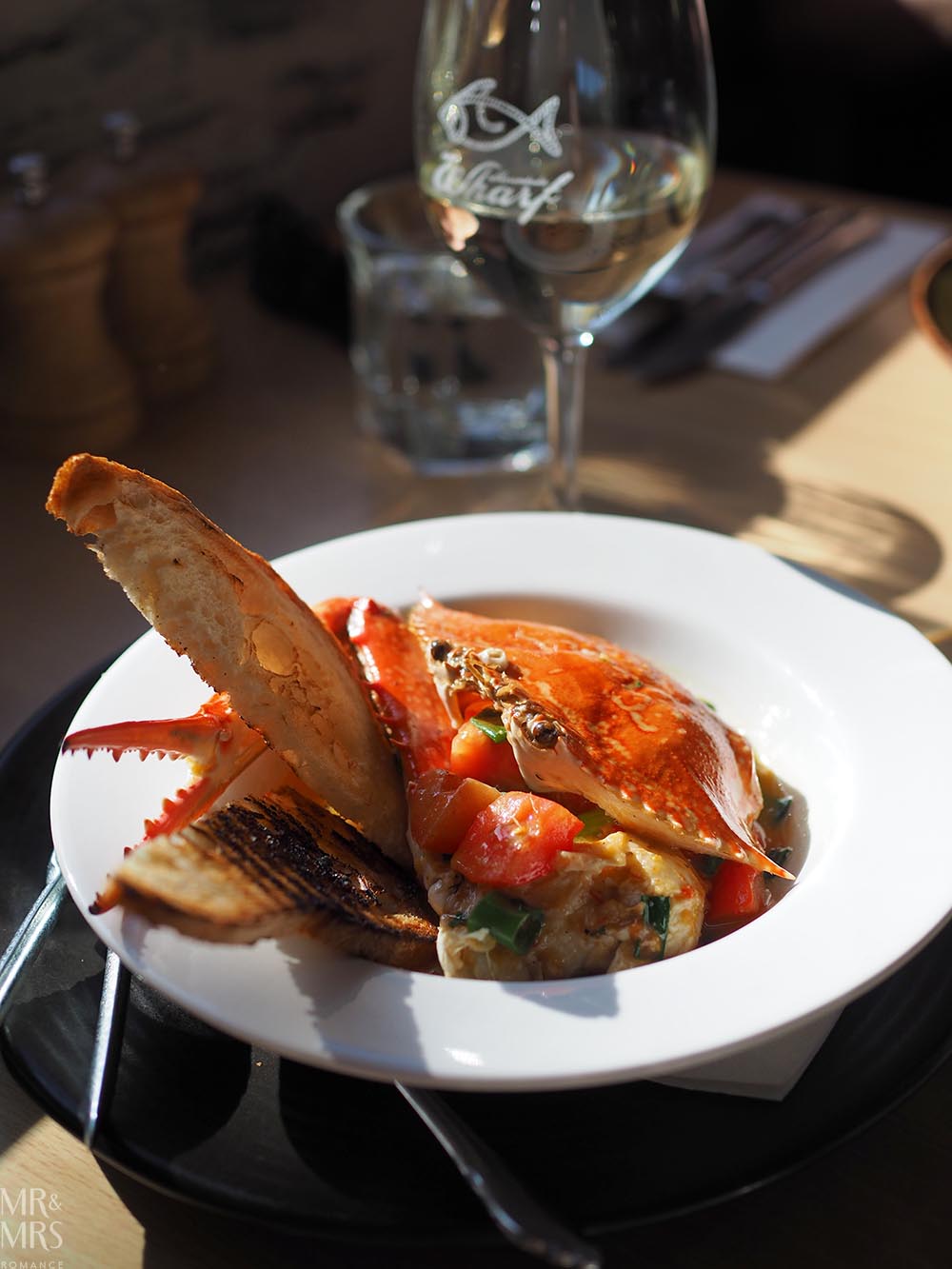 Thankfully, we don’t die just yet though; our entrees of squid risotto and crab bisque are on their way.

Christina’s risotto is cooked perfectly and has a gentle tinge of citrus from the preserved lemon. It compliments the fresh tender squid, cut into strips, and the glass of Jim Barry Riesling (for only $10!) cleans up the palate.

My bisque, which comes with half a big blue swimmer crab, is salty and creamy, and is balanced by the chunks of soft tomato and chopped spring onion. Adding the hard-won juicy sweet meat from the crab to the bisque creates extra texture and flavour, and the char-grilled sourdough I use to mop up at the end makes this yet another dish to die for.

And I’m glad I chose the bisque. Otherwise, Christina’s chowder main would have caused serious food envy for me.

Her giant bowl of unctuous, rich seafood and corn soup is packed with scallops, prawns, clams, fish and—of course—another huge half of blue swimmer crab, which seems to be jauntily bathing of the chowder.

My fish and chips—a beautifully grilled pink kingfish fillet—is exactly what I feel like though. It’s last-meal level.

The fish is juicy inside but slightly crispy on the edges, while the chips are perfect: crunchy on the outside but soft and almost gooey in the middle. 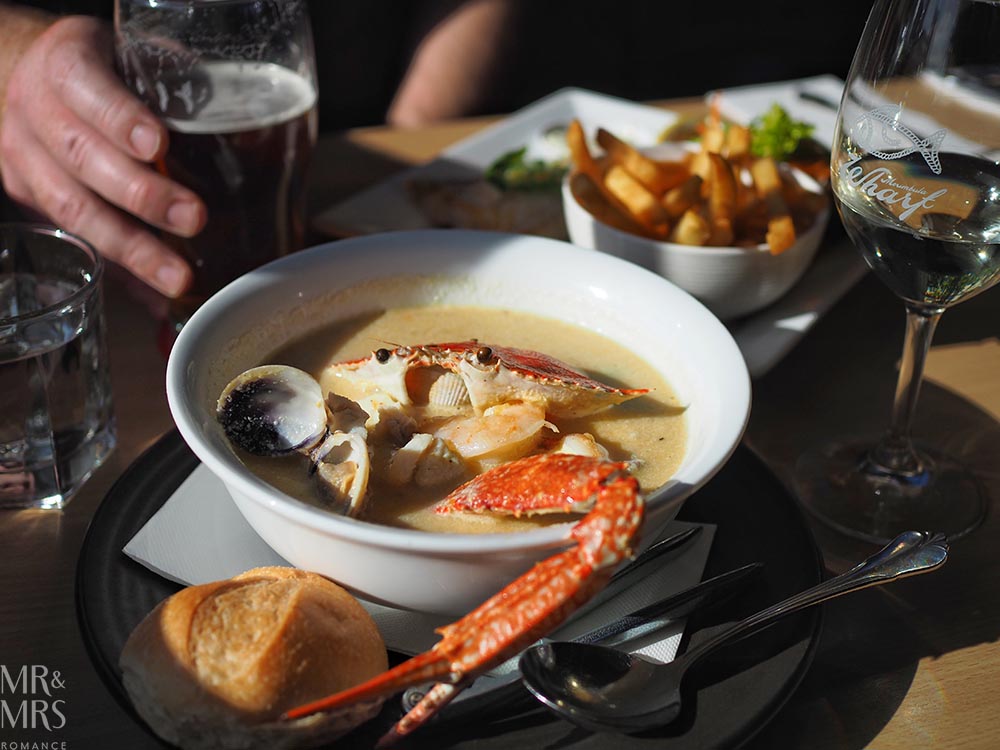 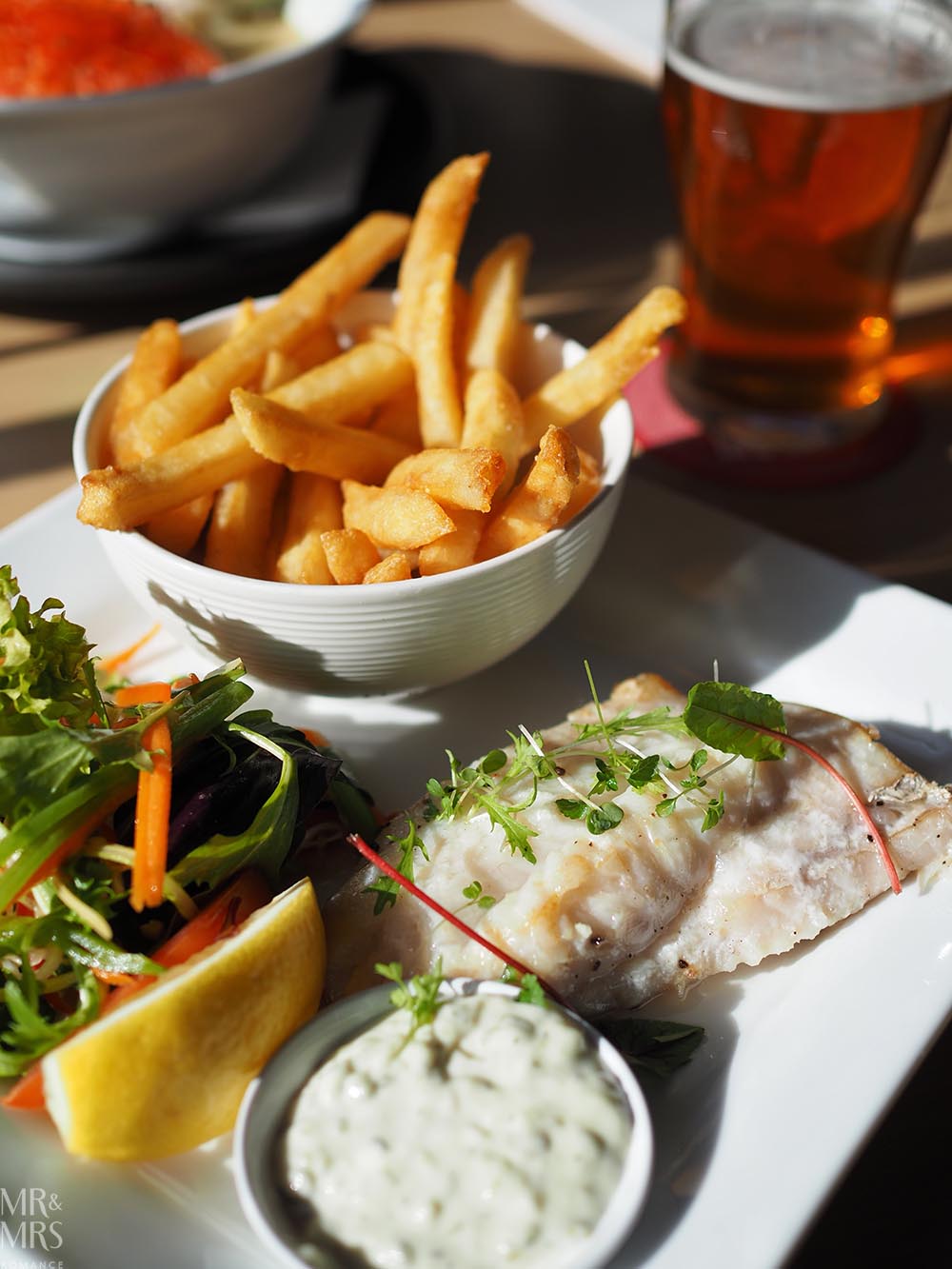 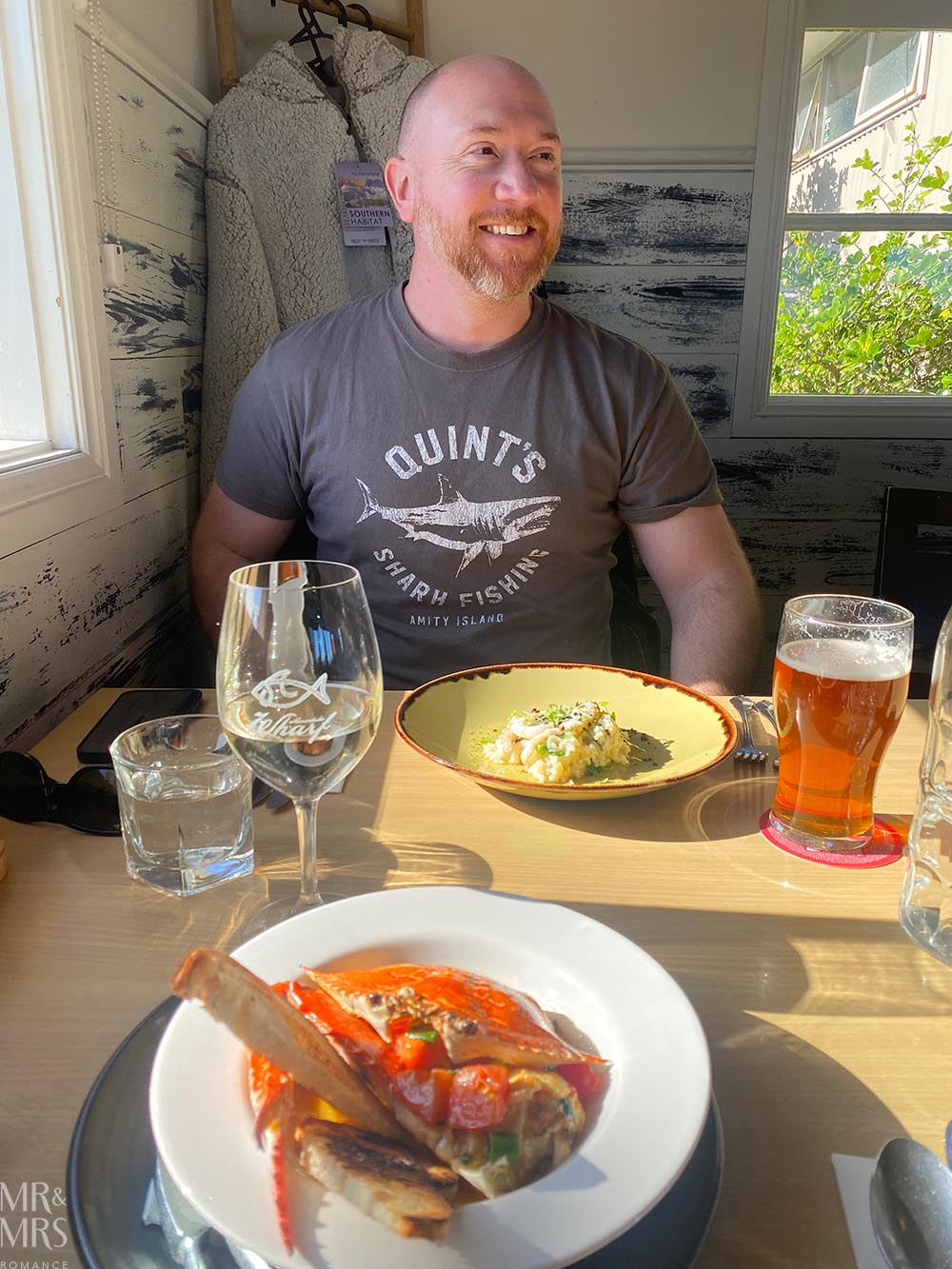 My tap beer from Hard Road Brewery in Bayswater. east of Melbourne, is a Belgian Pale Ale and is absolutely set for my fish and chips.

Fish are friends and food!

We ease ourselves out of our chairs and make our way to the stairs down to the aquarium.

As Anthony assured us earlier, it’s about as far from some kind of grisly stockroom or those sad fishtanks you sometimes see in Chinese restaurants as you can get. The fish are healthy and apparently pretty happy—though it’s hard to tell really, isn’t it. 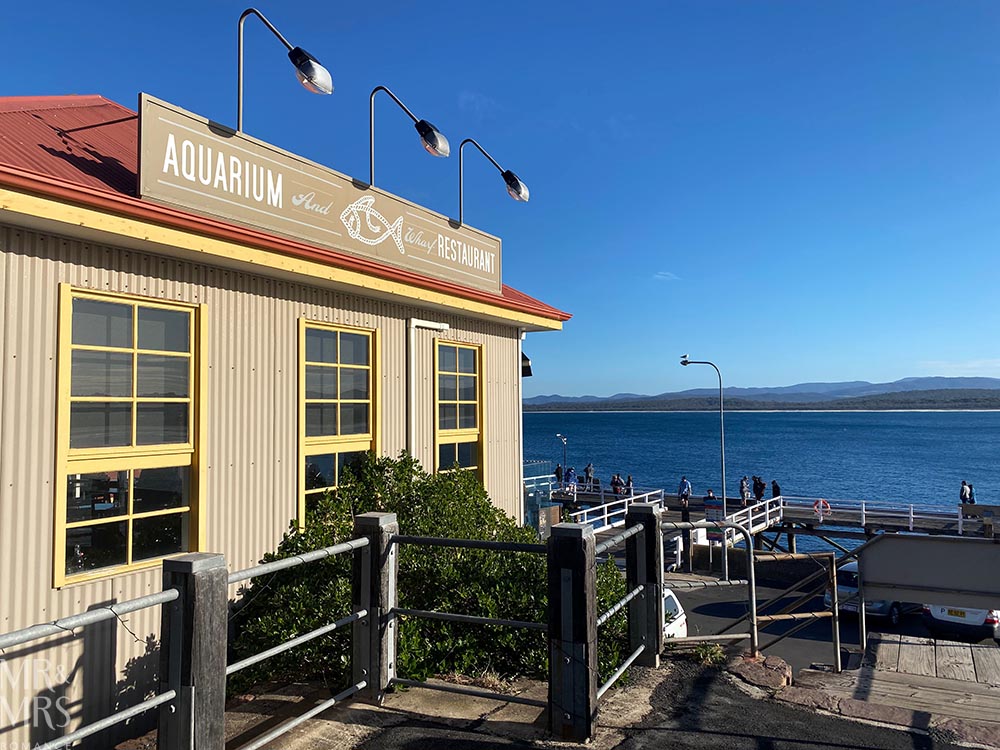 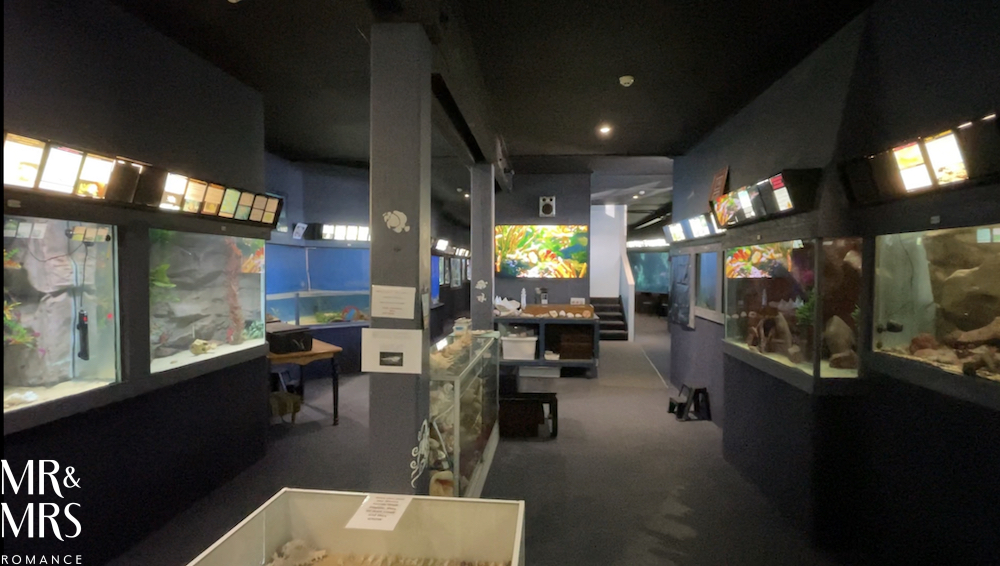 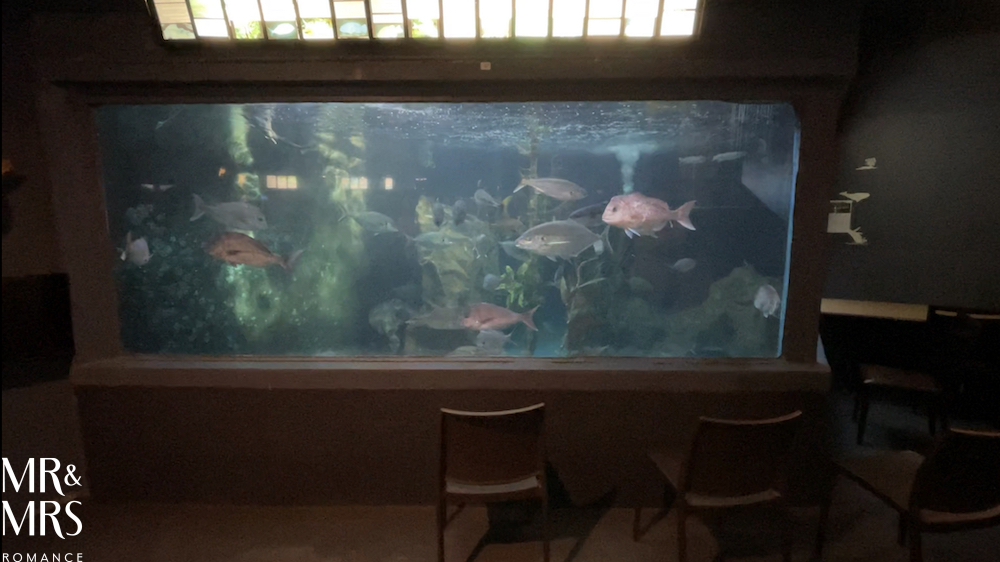 Displays are mostly of local marine species that you’d find diving off the coast of Merimbula in the 28 tanks and the impressive 70,000-litre oceanarium. But there are some national ring-in superstars like the ever-popular clownfish aka Nemo.

There are also things like a shell exhibit that shows the lifespan of a particular mollusc and how different conditions and environments create an amazing range of designs of the same species’ shell.

Merimbula Aquarium is open five days a week, Wednesday to Sunday—10am-4pm, but it’s better to come here when local marine biologists and oceanographers are here to talk about the exhibits Wednesday to Friday.

But even on the weekend, it’s an interesting thing to see.

I thought I’d feel more conflicted about having lunch above an aquarium, then enjoying the sight of the same fish that were on my plate moments ago swimming around.

But it wasn’t the case.

Instead it was a masterclass of appreciation. 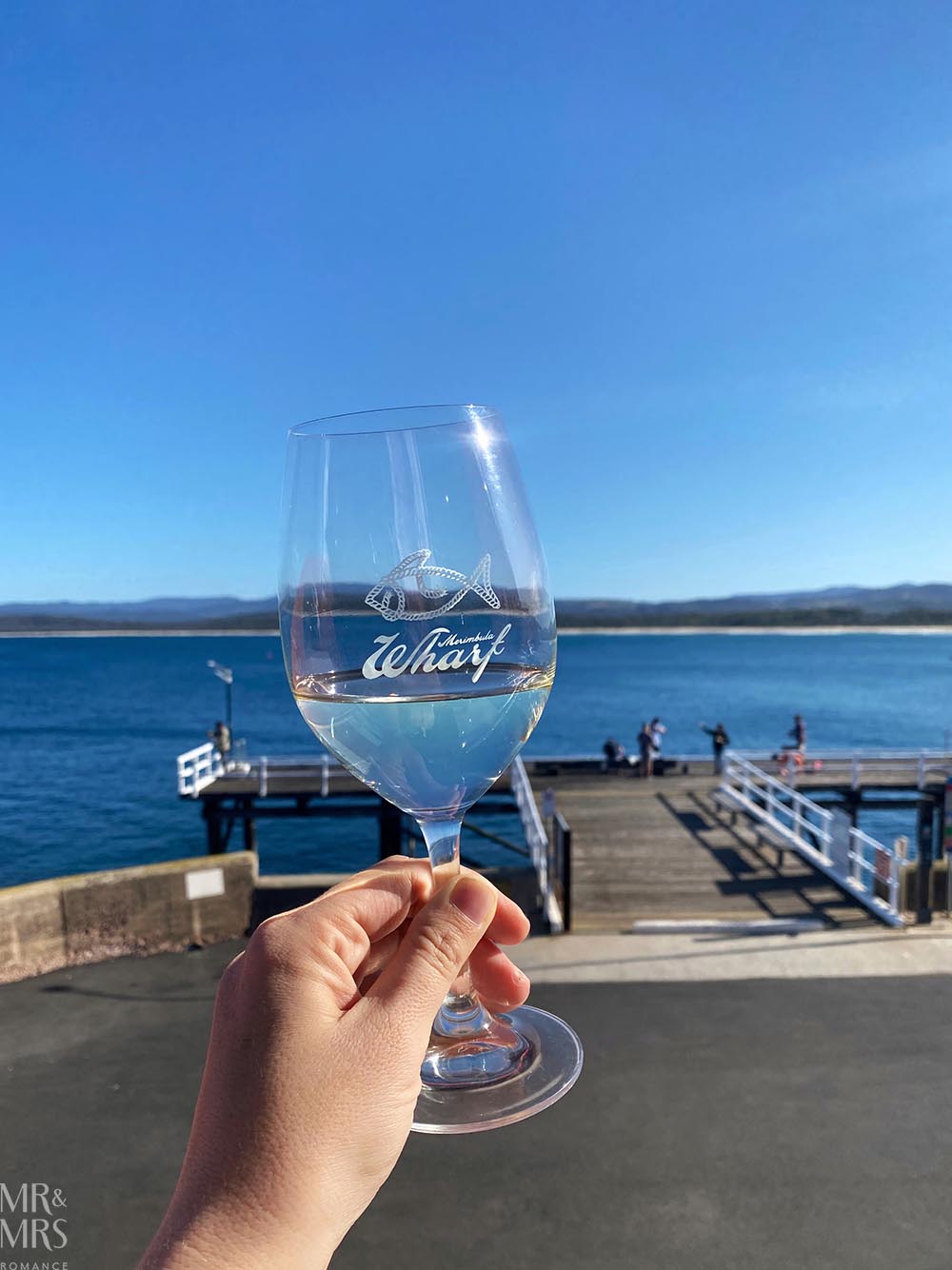 We dined and explored as guests of The Wharf Restaurant and Merimbula Aquarium in collaboration with Sapphire Coast Tourism Board, but our opinions remain our own.

Where to find a good lunch in Essex – Tiptree Jam Factory

“Just enjoy your lunch, will you?” I couldn’t believe it. The lady on the table behind us clearly needed to have her opinion heard….