Remember that opening scene in the Flintstones when they order the brontosaurus steak and it topples their car? It’s not as far-fetched as it may seem now that The Oaks Hotel in Neutral Bay, Sydney have their Tomahawk steak on the menu! 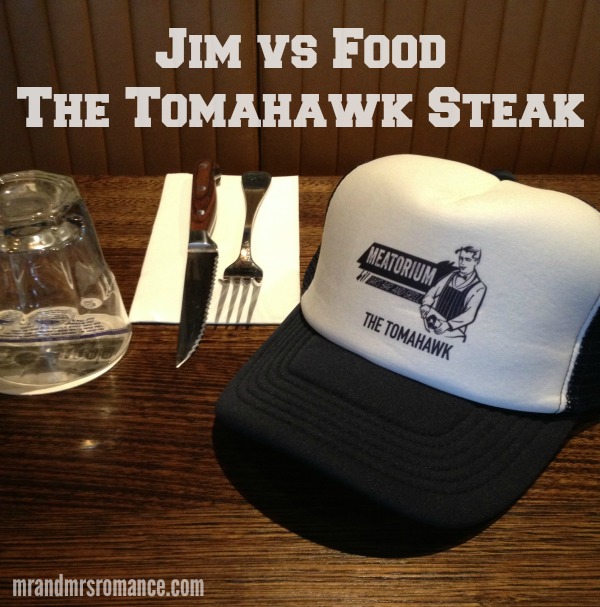 When I heard The Oaks Hotel was selling a 1.8kg steak, my greedy old ears pricked up and my bottomless pit of a stomach gurgled with glee. At last – a challenge fit for a glutton. And 1.8kg? That’s not that big, right?

I turned up the Oaks just as the chef was turning the steaks for the first time. He’d been forced to use the municipal grill outside where punters can grill their own steaks because the kitchen grill just wasn’t man enough! 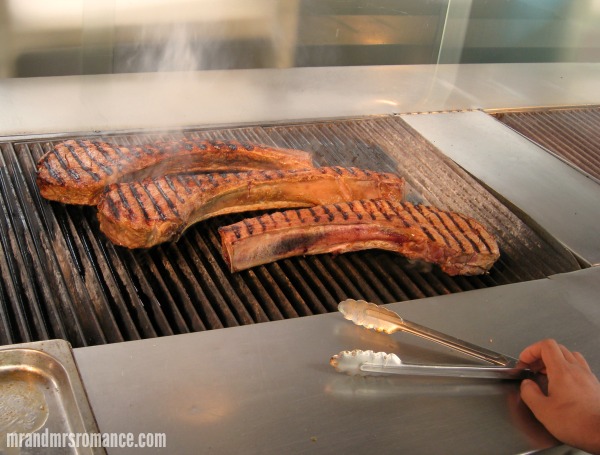 These things were huge! I hadn’t even considered so much meat could come from a cow – if that’s really where it had come from. I’m still waiting to see a news headline investigating the disappearance of one of the elephants from Taronga Zoo!

I watched as these gargantuan slabs of delicious-looking meat sizzled away and wondered if just missing breakfast had been enough preparation for this challenge. And was this grill going to cook the meat anywhere near its two and a half inch thick bulk? So many doubts.

The grill, it turns out, is only the first stage in a much longer cooking process. From the grill it goes to an oven for 20 minutes, and until the most delicious but sadly superfluous duck fat roast potatoes were done. 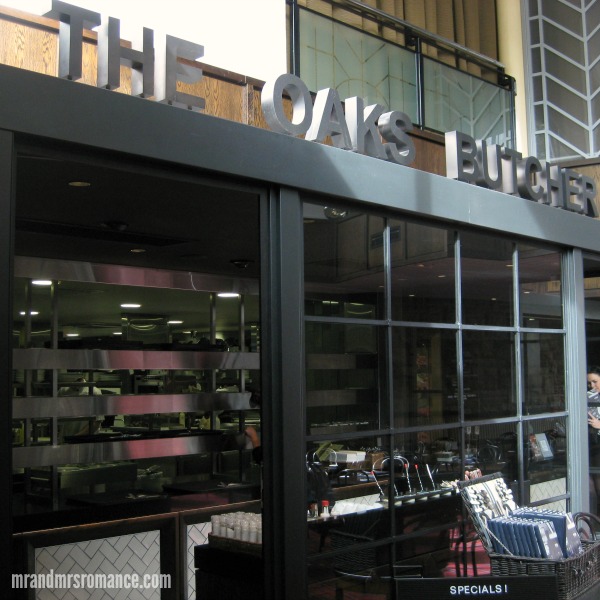 The Oaks has its own on-site butcher, so you know the meat’s going to be good. But just how good was what I was wondering…

My coach for the day, David, ordered his food just as my steak came out. It doesn’t look like there are many potatoes there, but there were about half a dozen spuds hiding behind this monster rib steak. And a small field’s worth of beans! 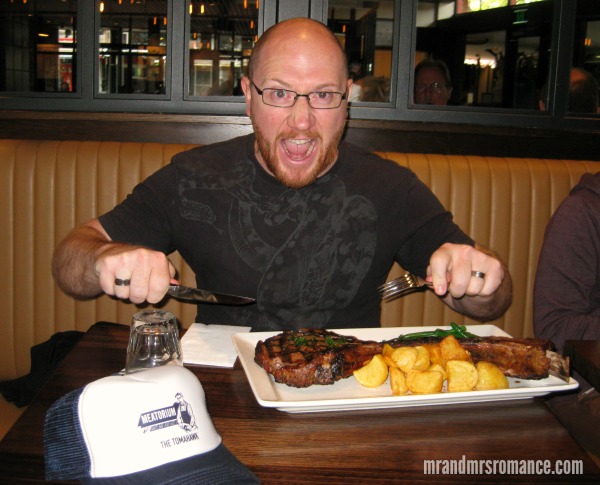 The waitress brought out sauces as well. Three whole gravy boats’ worth. The creamy mushroom and seeded mustard sauce was popular with my fellow eaters but I preferred the rosemary and red wine jus. The classic gravy was very good too, but not as good as the other two. 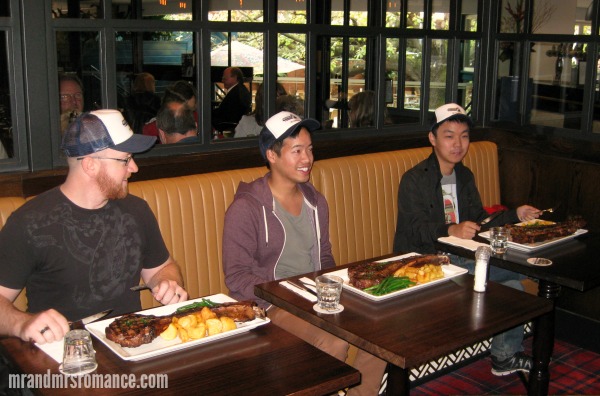 As for my competitors, I was eating against DK from ExcuseMeWaiter.com and Mr C from TheCKDiary.net. This was going to be tough.

What wasn’t tough, I’m glad to say, was the steak! I was very impressed with the consistency of the quality of the meat, how little fat I had to remove and the fact that I could quite literally carve slabs of meat from the bone to munch on.

Coach David’s food looked very good, but I only had eyes for my steak. And I could feel the meat sweats beginning to come on. By the time I was half way through my steak, Coach David had finished his burger and was back into cheering me on/drinking his beer. Mostly just drinking his beer actually.

My meat sweats had taken it up a notch. We’ve had the meat sweats, there’s nothing new there. But even when I went to a churrasco – a Brazilian barbecue – I hadn’t experienced this: I’d started getting the meat shakes! Very strange. 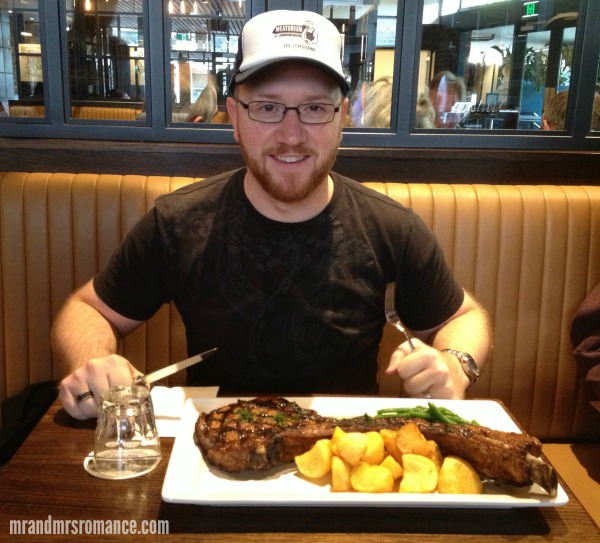 Just before the hour struck, I popped the last morsel of meat into my tired gob and chewed it down. I was exhausted. I managed a couple more potatoes – now sadly cold – and let the knife and fork fall from my trembling hands. What an effort.

If you’re wondering, yes there is an ‘after’ pic, but it’s pretty gory. If you really want to see it, click here and it’ll open in another page.

I needed a beer to wash that down with. A nice, cool Four Pines Kolsch did the trick. Just.

In reality, if you don’t want to slip into a meat coma, eating nigh on two kilos of beef isn’t a good idea. However, the Tomahawk is quite enough for two people and it’s a lovely piece of meat. This would be perfect for a dinner to share or a lunch for three people. 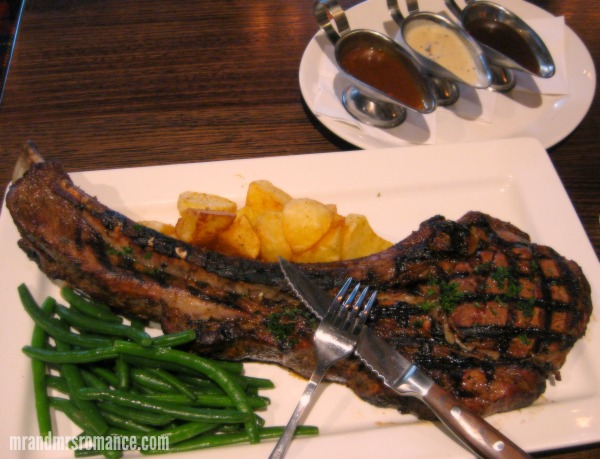 The pricing is roughly $50 per kilo for the Tomahawk so about $100 for the whole thing. That’s pretty good for value this quality of cut. And it’s worth trying just for the potatoes!

The Tomahawk Steak – only at The Oaks Hotel, Neutral Bay, Sydney.

What’s the biggest thing you’ve ever eaten? Have you ever had the meat shakes before? Tell us about it in the comments! 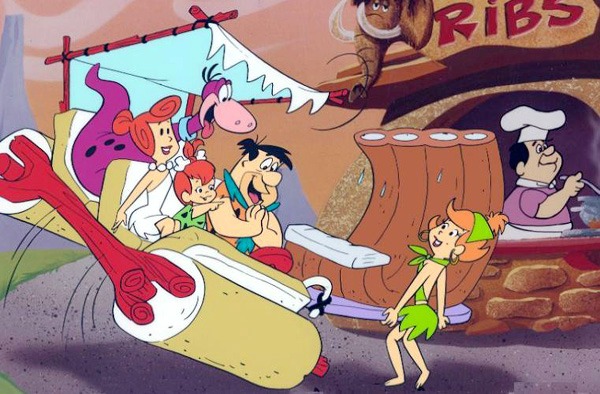 Mr Romance and Coach David dined as guests at The Oaks.