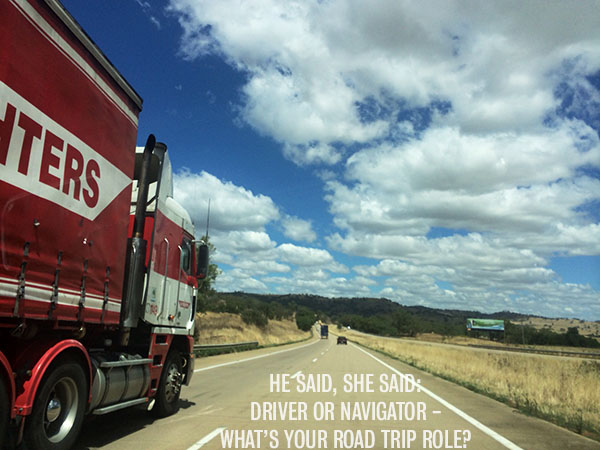 I do the driving because, if I wore one, I could get lost in my own hat!

Hand me the map. I don’t ask for directions, I give ’em.

It’s not that I don’t like navigating; I do. And I can find my way on a map ok – though I have to refer to it very frequently. I’m also fine with asking for directions…

The problem is I have no sense of direction whatsoever, so any instructions usually just confuse me. It can mean I get lost so suddenly, it’s as if I’ve been transported to a completely different part of the world.

I’ve learnt to make the most of this ‘talent’ though, and I’ve discovered so many interesting places and met great people I’d have missed without of it.

Mrs Romance, on the other hand, has a sense of direction that bests most GPS devices. So on the rare occasion we do get lost, it tends to stress her out.

We’ve tried reversing the roles on road trips – she drives and I navigate – but it’s ended in terrible arguments. We embrace the ‘why rock the boat’ philosophy, so now I point the car wherever she tells me.

Mrs R is very much at home in the passenger seat. Although she does enjoy driving, she has a tendency to stress out and, over longer drives, she’ll start talking to the cars around her. It’s very disconcerting. And she hates parking.

Instead, we work to our skillsets, which I think is how our relationship has lasted so long.

Mrs R has got us out of some pretty bad fixes with her map-reading skills. She’s navigated us through the centre of Paris, for goodness sake. That takes some doing.

I can park anything anywhere – I’ve even been applauded by strangers. I’ve taken a Nissan Tiida off road through rivers, driven an ORV on tiny teetering cliff-top back roads the full length of the Cinque Terre and I’ve pushed my way through the angry rush hour traffic of Naples.

Together we make a pretty formidable team – but if we switch roles, we fall apart!

You don’t have to ask me twice to go on a road trip. We’ve taken a few in our time and it’s one of our favourite ways to travel. You have so much freedom to go where you want, when you want.

Just this week we decided that we would drive to Melbourne the next day. That’s a drive of almost 900km but it doesn’t faze me. Growing up in Australia you get used to the distances.

Mr R and I have pretty defined roles on our road trips. He is the driver and I am the navigator. He excels at parking and I have a keen sense of direction. He loves to drive while I love to read maps.

I hate the stereotype that women can’t read maps. I’ve been reading maps since I was a kid and I pride myself on a strong sense of direction. I do get messed up with left and right, but I’ve managed to keep it in check when giving directions.

It’s important to play to your strengths when choosing any job, and a road trip is no different.

We tried switching roles and it didn’t go so well. We were off on a short 4 ½ hour trip and I thought it would be nice to give Jim a break so he could enjoy the scenery. It seemed like a good idea but it felt wrong. Then it started to go wrong when we got lost and took the wrong road… twice.

After driving through a paddock of cows (see above photo), we knew it was time to switch back to our usual seats.

While I like to drive, the passenger seat is my preferred place on road trips. Like I said, I don’t ask for directions, I give them.

Are you the driver or the navigator on your road trips?

Where to stay in Okinawa, Japan – JAL Private Resort Okuma

Words like ‘spacious’, ‘beachside’ and ‘resort’ aren’t what you usually associate with hotels in Japan, but then Okinawa isn’t your typical Japanese destination. And…