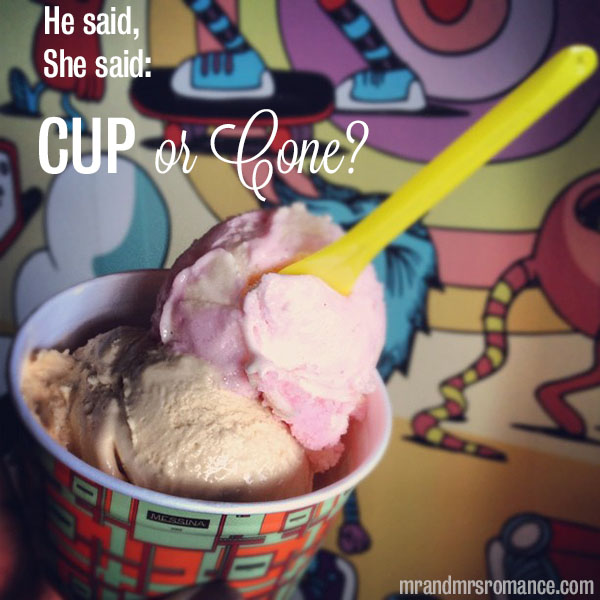 Cone every time! It’s like having an edible handle for your ice cream!

Why waste those extra calories and carbs on a cone? 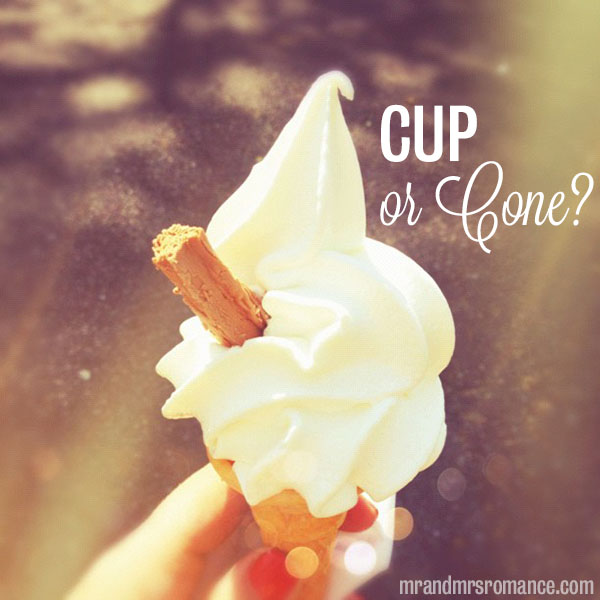 Mrs Romance has been trying to convince me that ice cream in a cup is better for years. I just can’t do it though. I love the crunchy, biscuity element a cone adds to an ice cream.

Granted, sometimes the cone can be soft and gross but I’m happy to take that risk. Cups on the other hand, have nothing to offer – not even flavour – other than future landfill. You see! Cones are even have the environmental upper hand.

On top of the cup being bad for the environment, it’s impossible to eat from one without a spoon. Can’t eat the cup. Can’t eat the spoon either! Two black marks from the greenies!

And while I’m on the ranty warpath, if I am forced into a cup-eating corner, I always end up carrying the bloody thing because there are never any trashcans around!

The final reason cones are so much better than cups is a nostalgic one. I remember when I was a kid, my dad teaching me the arcane art of biting the tip off the cone and sucking the ice cream out the end. Good times.

Now you try doing that with a cup!

I am a huge ice cream fan. I believe I have an extra stomach just for ice cream as no matter how much I eat, I can always fit in a scoop. Or two.

I’ve even thought of starting a blog solely devoted to ice cream. I would do a series of flavour combinations and reviews of the best ice cream from around the world. Don’t get me started on the difference between ice cream and gelato…I’ll just keep talking about ice cream.

Anyway, I’m distracted and making myself hungry with all this talk of flavour combinations.

I like to order two flavours and I’m not convinced on the benefits of the cone. Yes, you can eat with one hand but you have to rush to eat before your ice cream melts and your flavours meld into one.

The quality of the cones varies from inferior waffle cones to those awful soft wafer cones. Why would you waste the extra carbs when you could eat from a cup?

The cup also lets you choose which flavour to eat first, whereas the cone forces you to eat in the order scooped.

The cup is a more relaxed way to eat your ice cream that lets you choose which flavour you want to finish with. Some gelaterias, like San Crispino in Rome, don’t even offer cones. They know the cup is superior.

For me, I choose the cup every time.

How about you? Do you pick the cone or the cup?

he said she saidice cream

It’s been a mercifully quiet week for us… well, me. It really feels like the calm before the storm, with our first flight now…