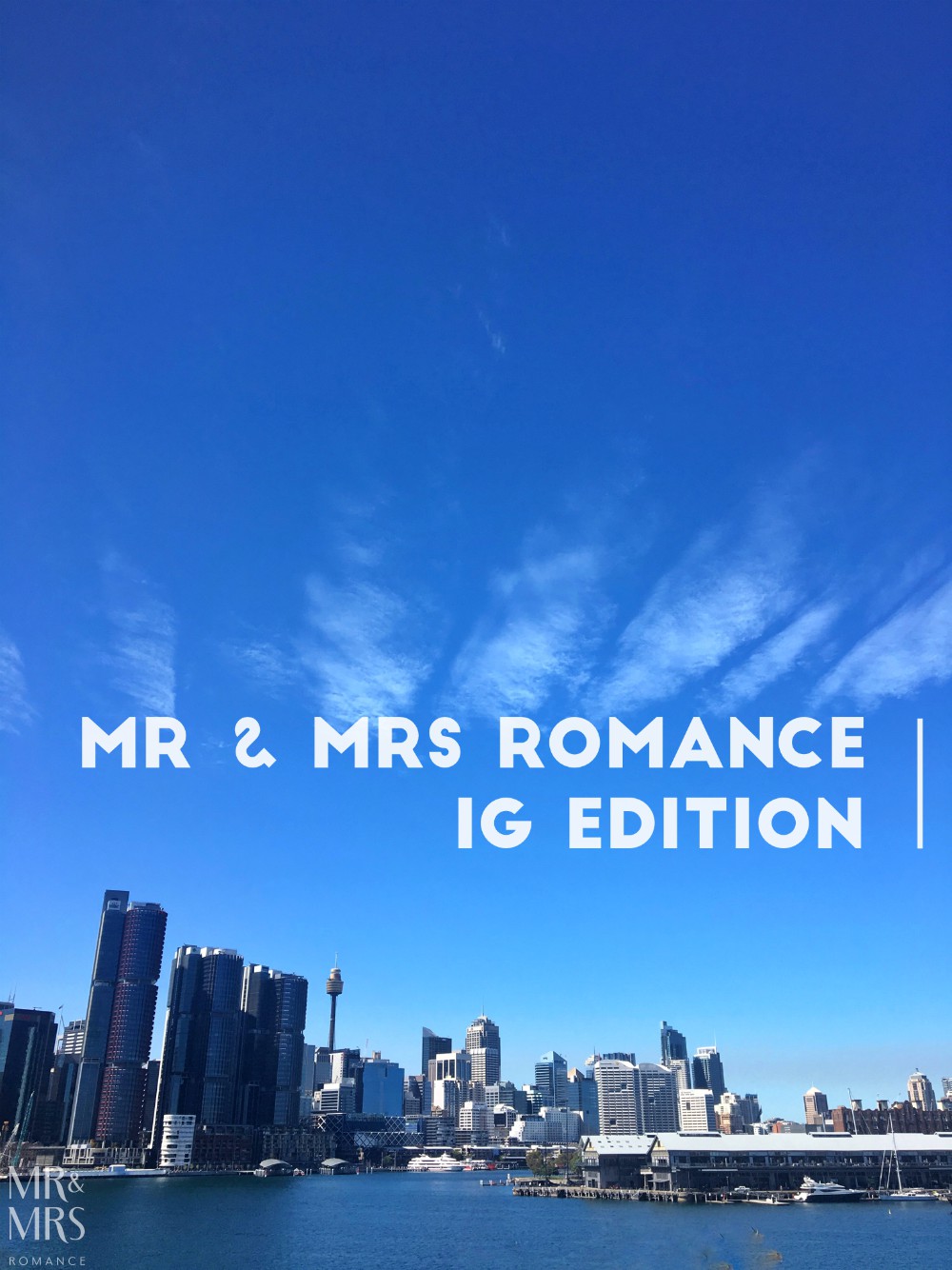 We’re pretty darn happy this week – it’s been an all-out Italian fest. And you know how much we love all things Italy.

In this week’s IG Edition, we have a test drive of the menu for Festival of Nonna – a celebration in Sydney and Melbourne of meals the way Nonna makes them.

Also in town is the Lavazza Italian Film Festival, and Mrs Romance and I go to Leichhardt to check out what’s on the silver screen this season.

In travel news, our latest hotel review is here, and guess what: it’s an Italian hotel! But with a difference.

We hope you enjoy this week’s IG Edition. Chat to you again soon! 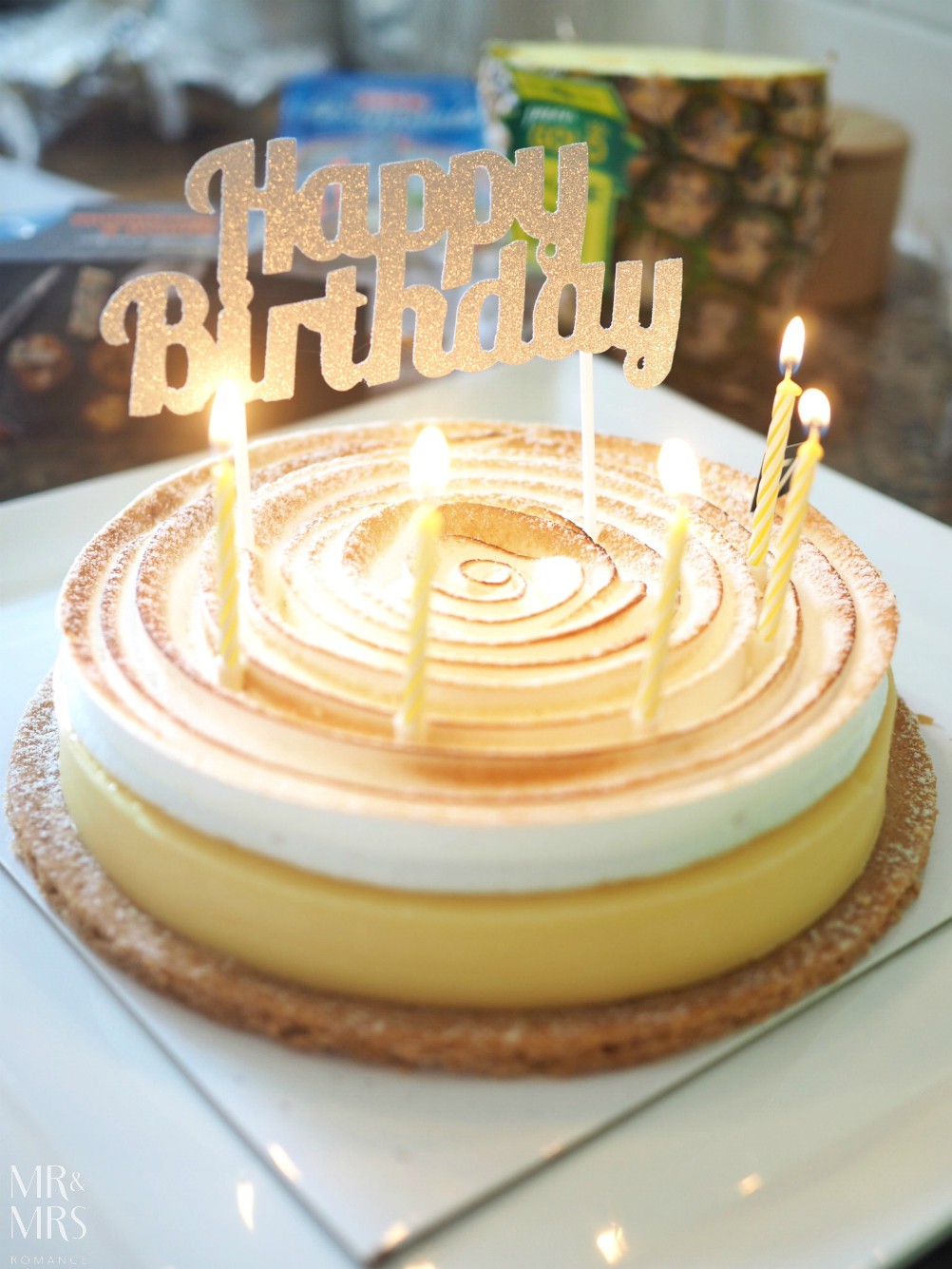 I don’t know if I’ve told you – Mrs R doesn’t “like cake that’s made of cake”, which might sound strange, but it makes sense. Cheesecake, pavlova, ice cream cake: all acceptable.

So this lemon meringue tart from Adriano Zumbo is perfect. It’s actually one of the most delicious cakes I’ve ever had, so if you’re not sure what to take to the next birthday party you go to, grab one of these. They’re amazing. 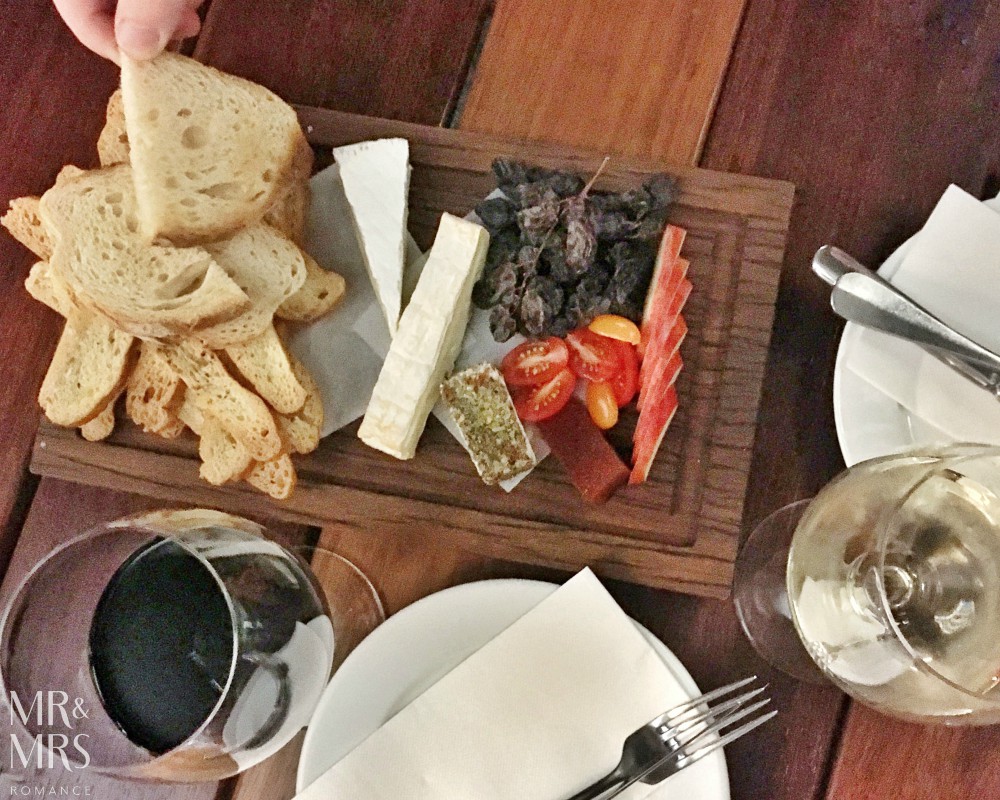 This evening, we’re out with our friend Kris Ashpole, who’s also the lady who took our photos like the one on our homepage.

We’ve met her in Glebe in a little wine bar called Timbah. It’s a very cool little spot with some fantastic wines from local and international small producers.

Apart from its excellent wine list (the beer here is also great btw), Timbah has some delicious food options. This cheese plate is really hitting the spot with us – though they’ve run out of the blue cheese.

But you know what makes this cheese board exceptional? There’s loads of bread and crackers. I hate it when you get plenty of cheese but nothing to put it on. Timbah, we salute you. 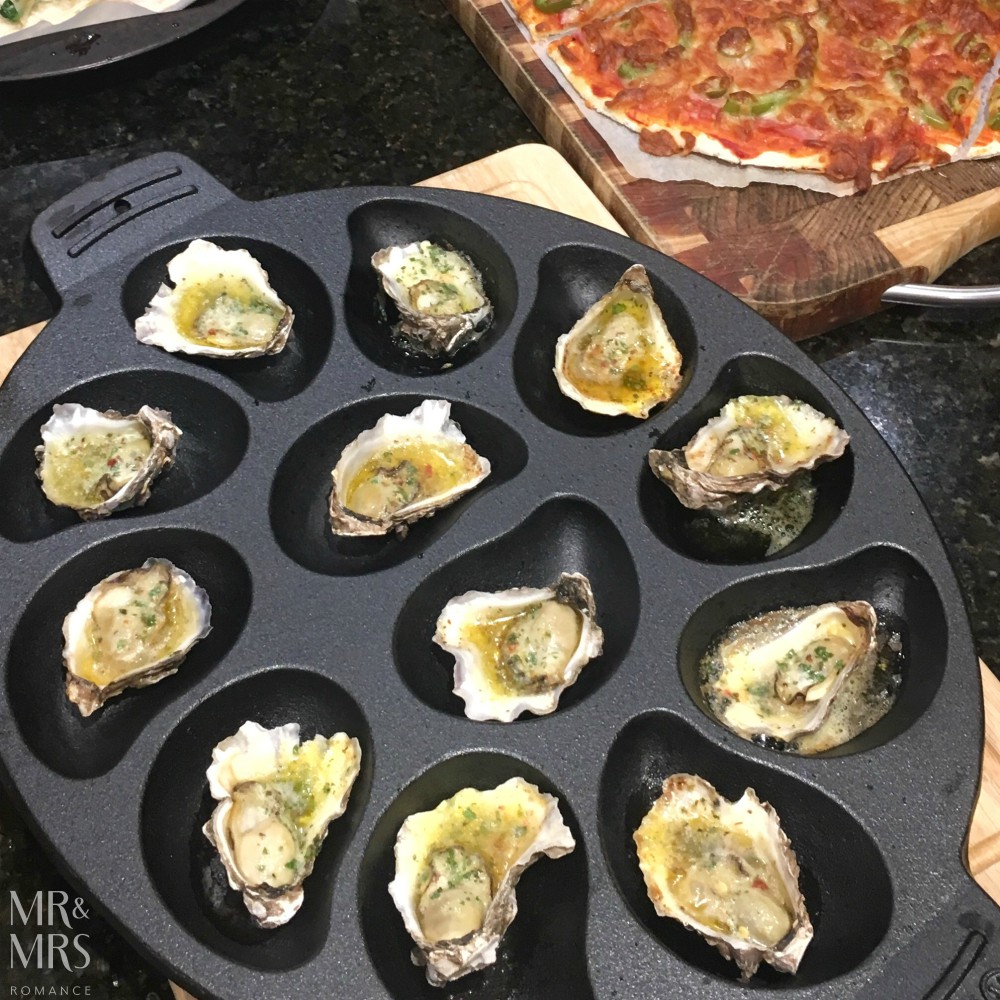 Tonight we’re round our mate Steph’s place for dinner. Whenever she invites us, we always make time for her. It’s got nothing to do with how much we like her (we don’t really), it’s because she always feeds us splendidly!

These oysters, baked with garlic herb butter, are insanely good. And don’t you love her cast iron oyster pan? I’m such a sucker for cookware. 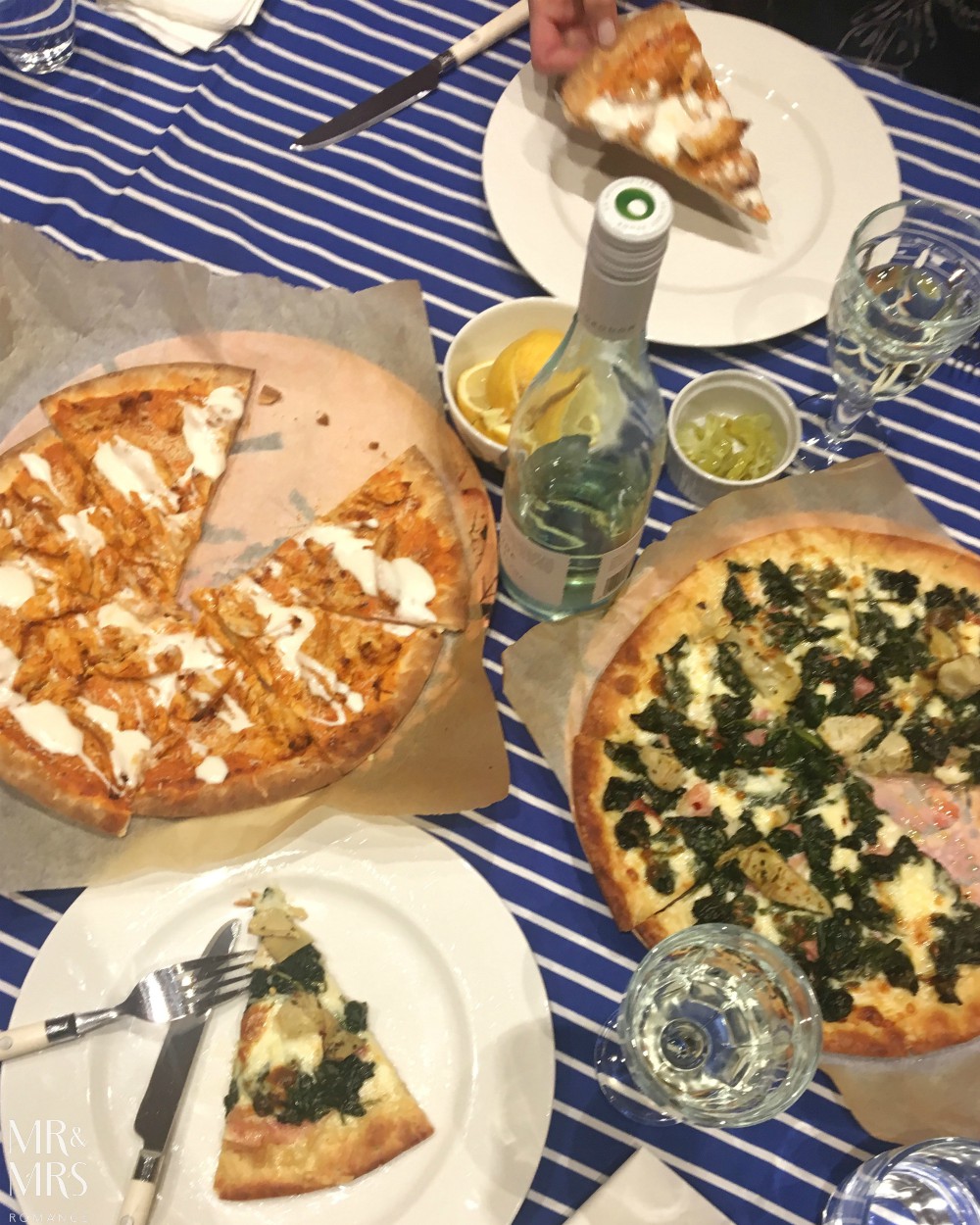 Dinner is served. And right in line with this week’s Italian theme, Steph’s pizzas are on point: chicken and ranch pizza, and spinach, artichoke, prosciutto and mozzarella. Inspired stuff. 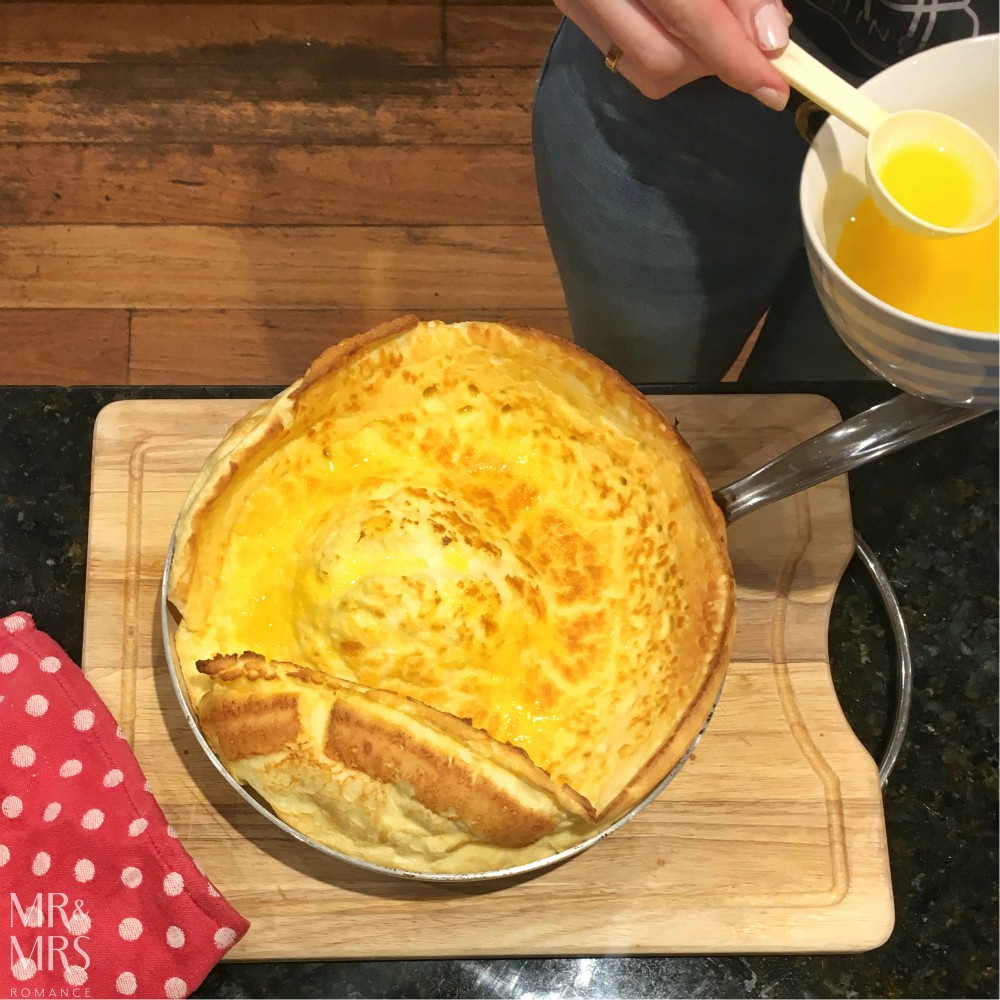 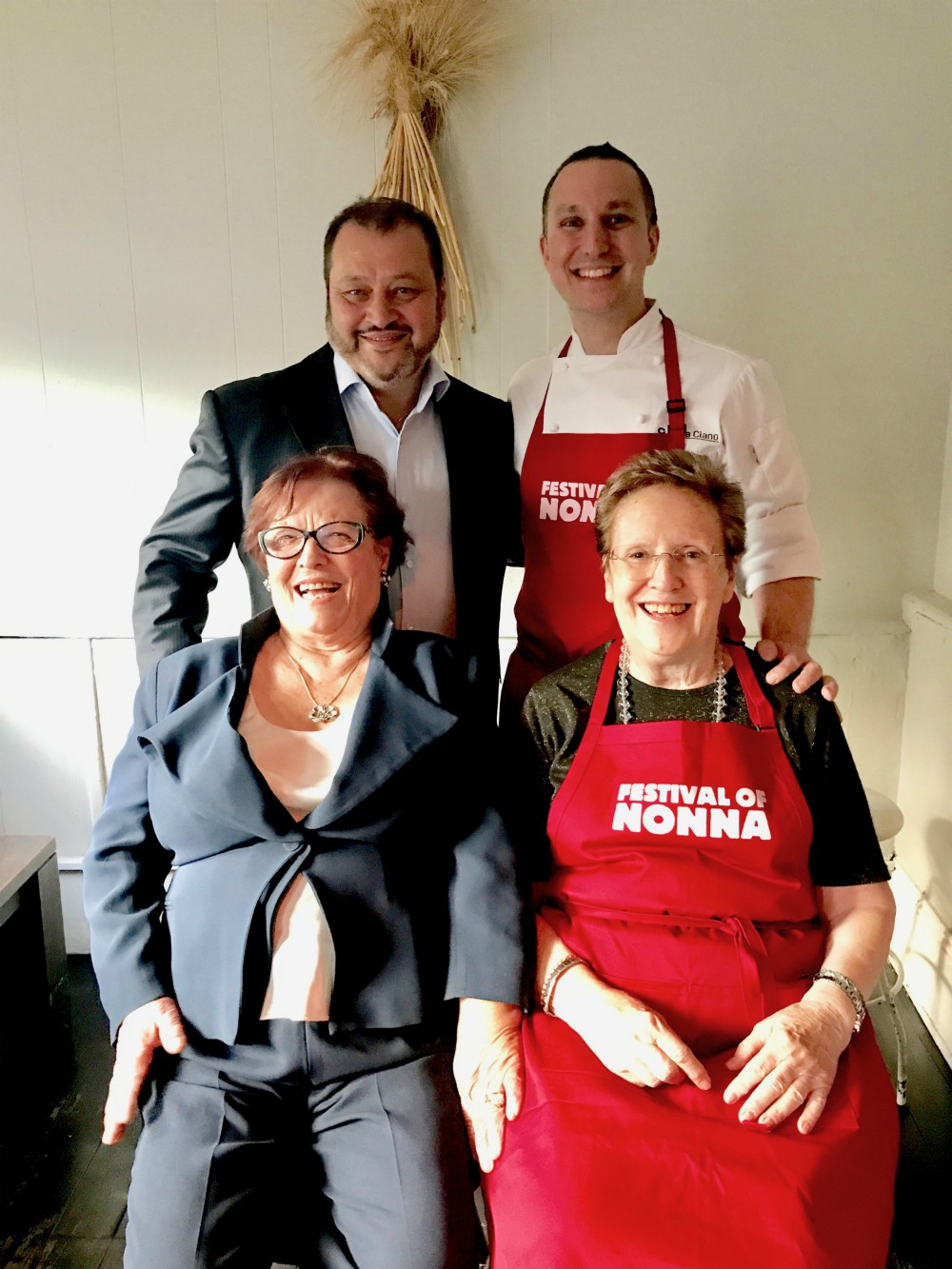 Tonight we’re at A Tavola in Darlinghurst to get a taste of the Festival of Nonna.

We’re really quite impressed with the Festival of Nonna. For the Italian family, the nonna – or ‘grandmother’ – is a central character, and holds the unit together with her love and (more specifically) her cooking.

Check out the details and tickets here.

On the left isMimmoLubrano and his mum Geraldine, who own Sandhurst Fine Foods and who have created this festival. On the right is Michelin-starred chef and author Luca Ciano and his mum Annita. 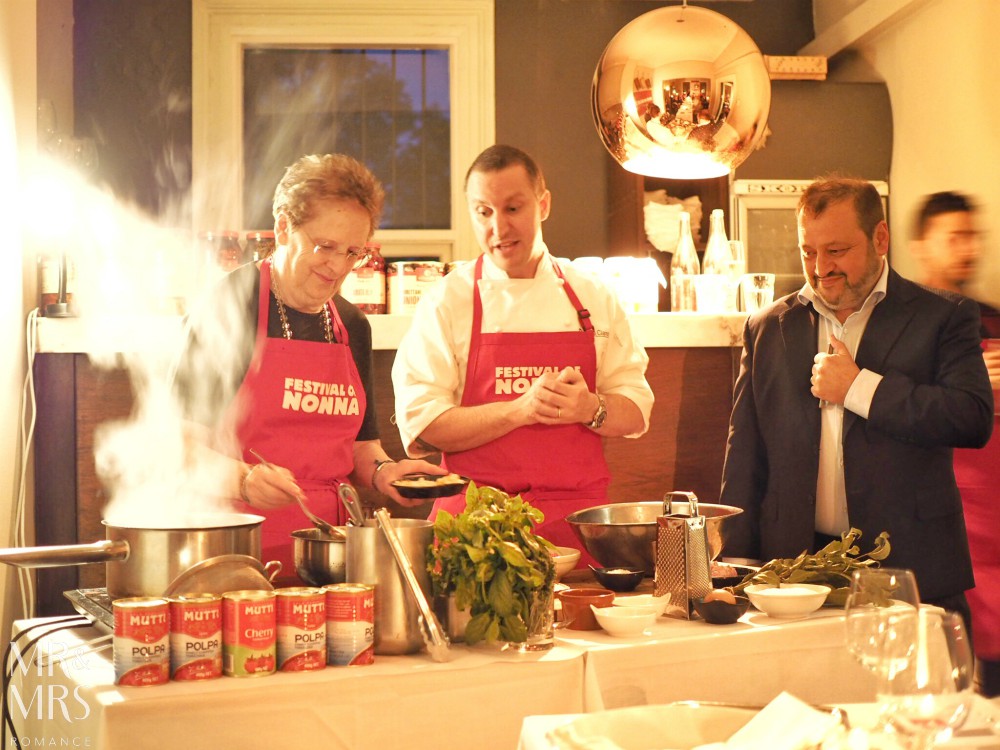 It’s hard to believe that NonnaAnnita arrived from Italy only a day ago. She’s up on stage demonstrating how to cook a ragu. She has the power of nonna for sure!

Mrs Romance is in her element though; she loves talking to the nonnas and nonnos, and it means she’s practising her Italian too, so I’m happy! 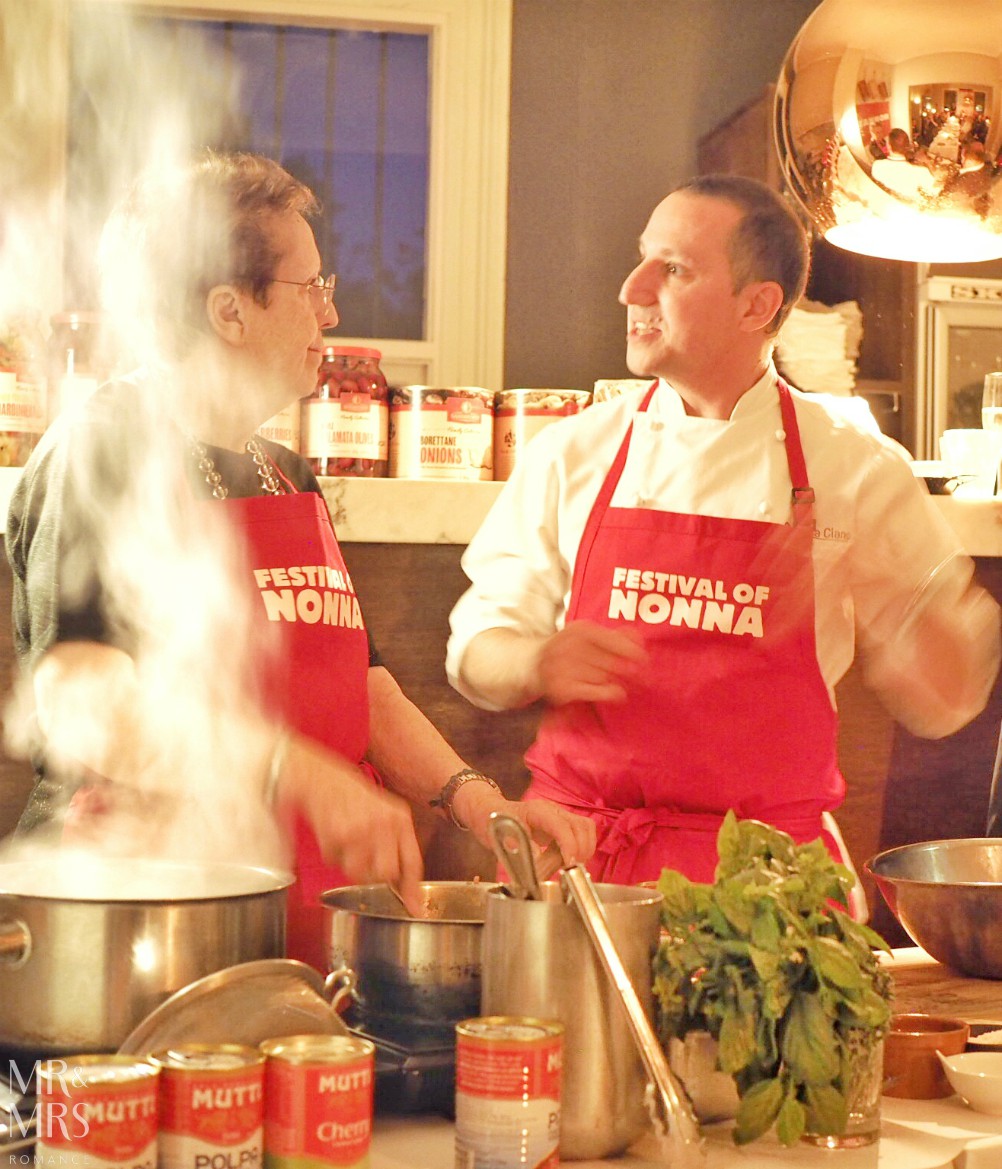 While his mum’s cooking the ragu, Luca is showing us how he makes gnocchi.

Luca and his mum will be running half the events for this year’s Festival of Nonna here in Sydney and in Melbourne. 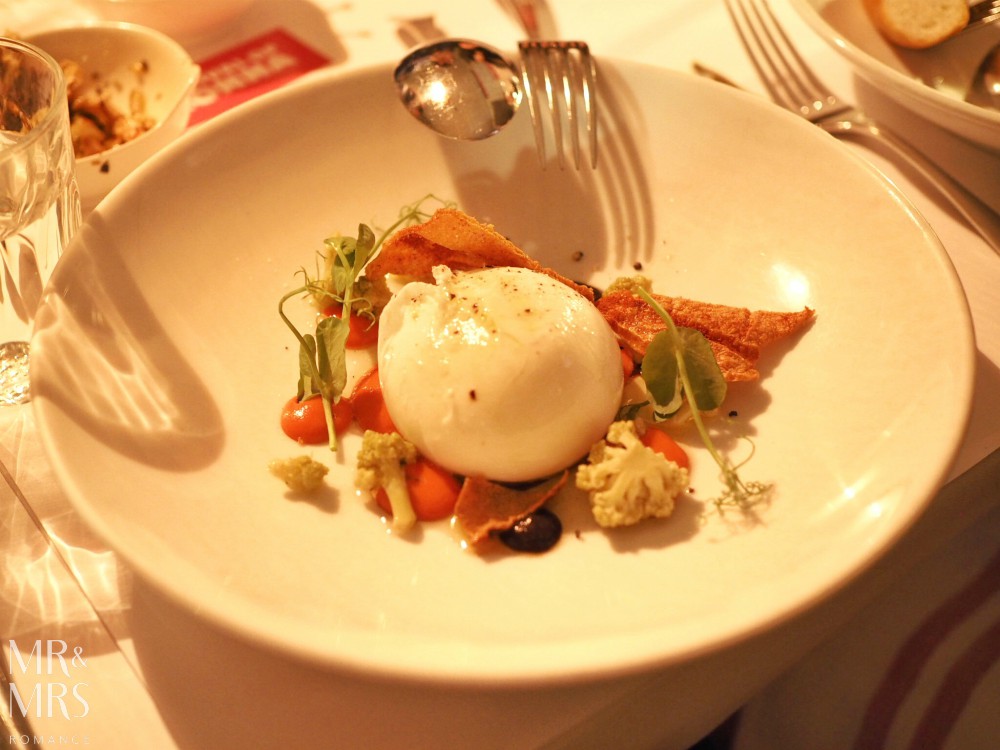 And here comes the food! To our delight, the entrée is burrata – a cheese specifically from Puglia, where we’ve just spent some time – and it’s absolutely delicious.

Other entrées they bring us are ‘ricciola con yoghurt’ – kingfish, yoghurt and carasau (a Sardinian crispbread), and ‘battuta di cervo’ – a beautiful venison tartare with beetroot puree and kurmara potato. 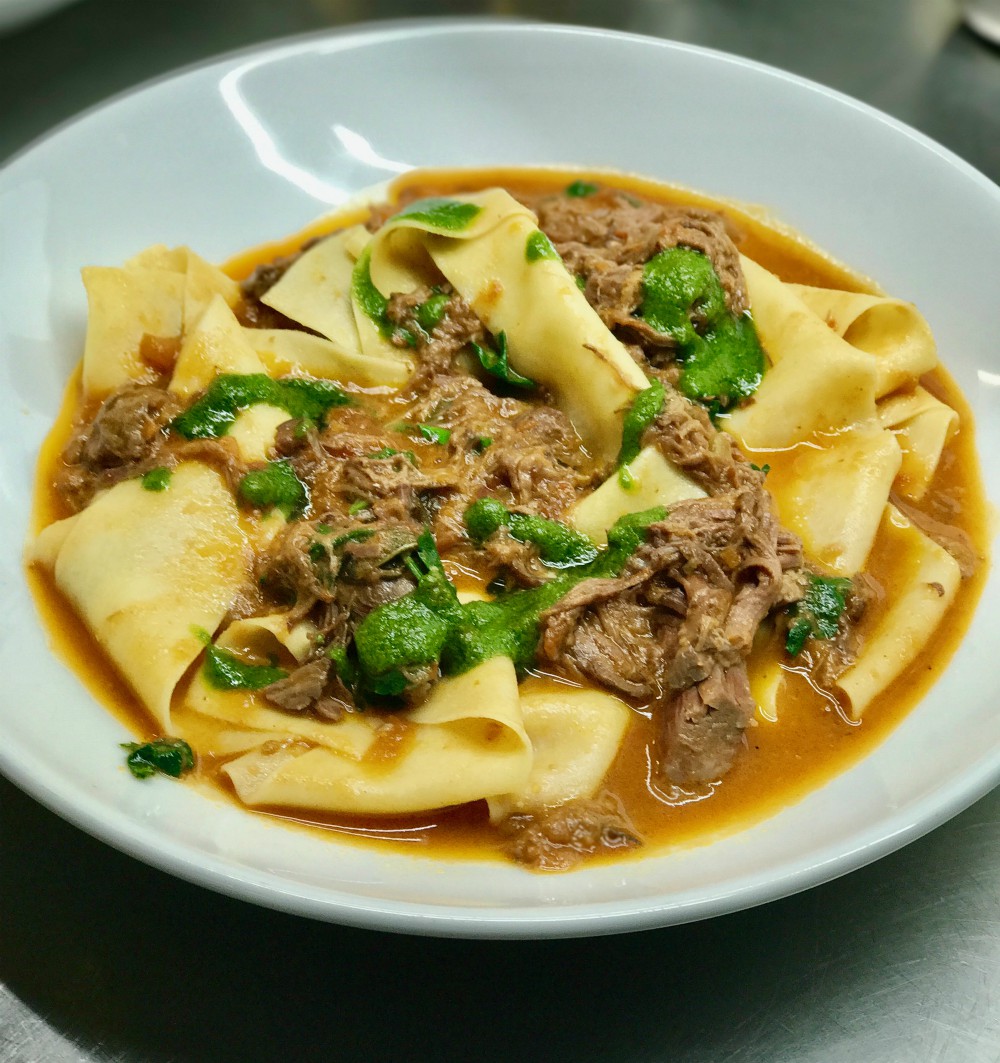 We also get to try ‘mallureddus con capesante’ – an unusual gnoccetti-like pasta shape from Milan – with the sweetest scallop meat, and ‘pesce in cartoccio’ – fish baked in paper with fennel and salmoriglio – a southern Italian sauce.

Make sure you don’t miss out on a seat at Festival of Nonna this year. Tickets are selling out fast and the food’s going to be amazing. 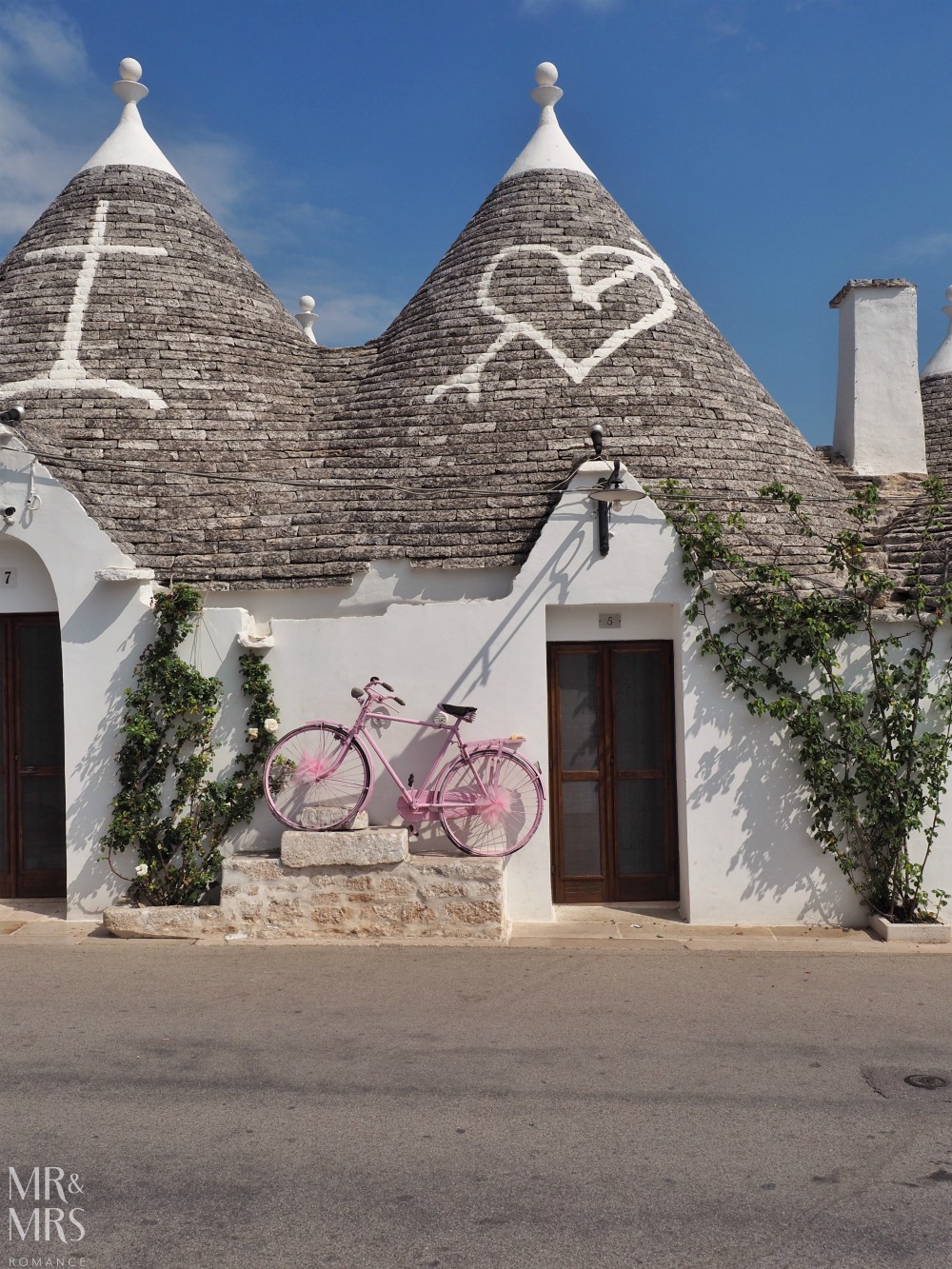 We’ve just finished our latest hotel review, and this one’s a doozy. While we were in Puglia in southeastern Italy recently, we stayed in one of these. They’re called trulli and they’re kind of the iconic building of the region.

The trulli are thought to have come about from peasants in feudal times building them to avoid paying taxes because they were seen as temporary structures.

The symbols on the pointy roofs indicate the builder who made the roof and also have religious meanings. 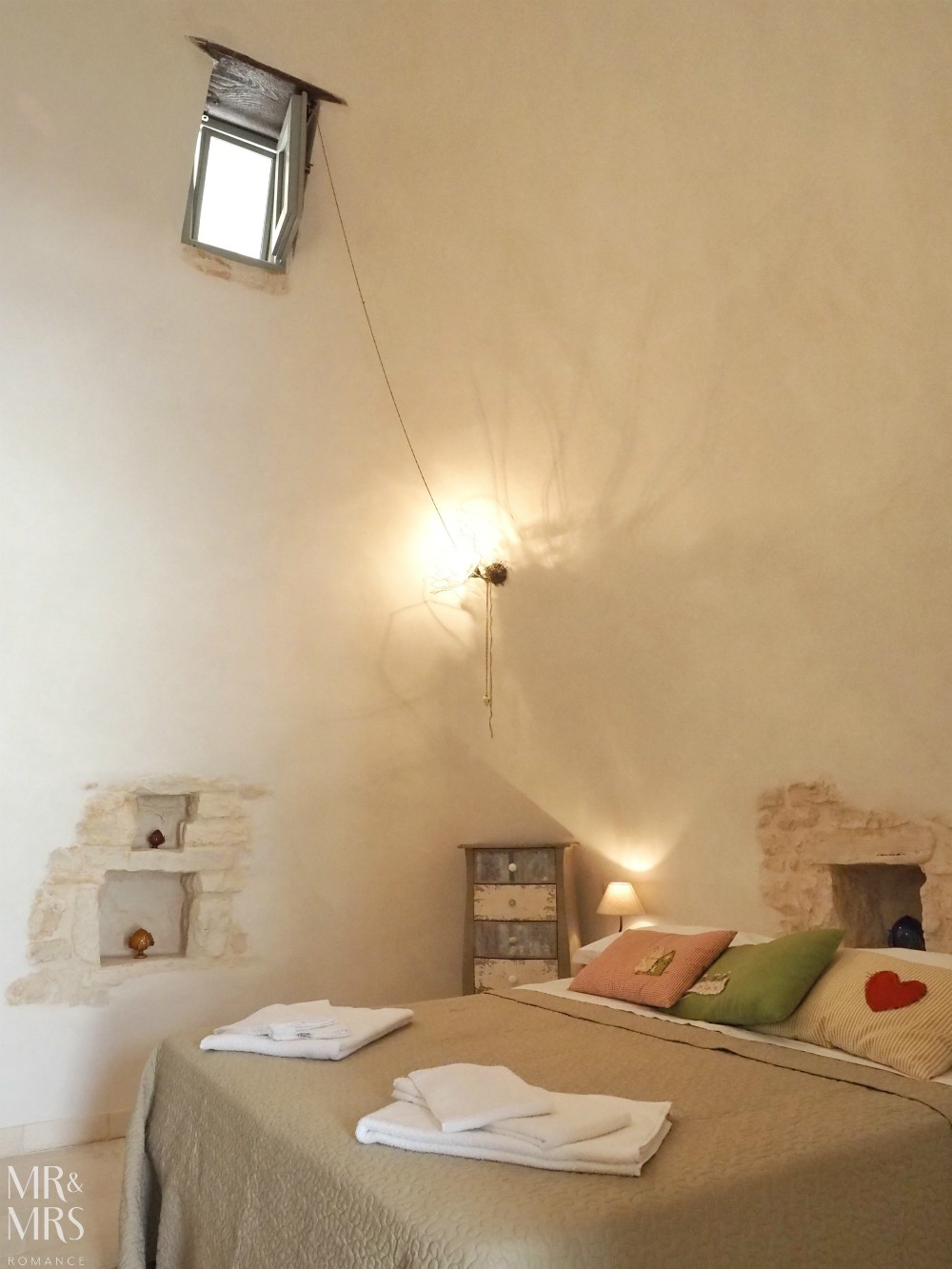 Inside, our trullo was so cosy, though the surprisingly high ceiling meant we never felt cooped up or claustrophobic. Our hotel – Le Dieci Porte – is a little way our of Alberobello, the town where the previous photo is from.

It’s more like a little B&B trulli village run and owned by a lovely couple Stella and Christophe. These guys have rebuilt this hamlet of trulli from ruins. It’s taken them 10 years and there’s still work to do, but so far this place – tucked away in the Pugliese countryside – is paradise. 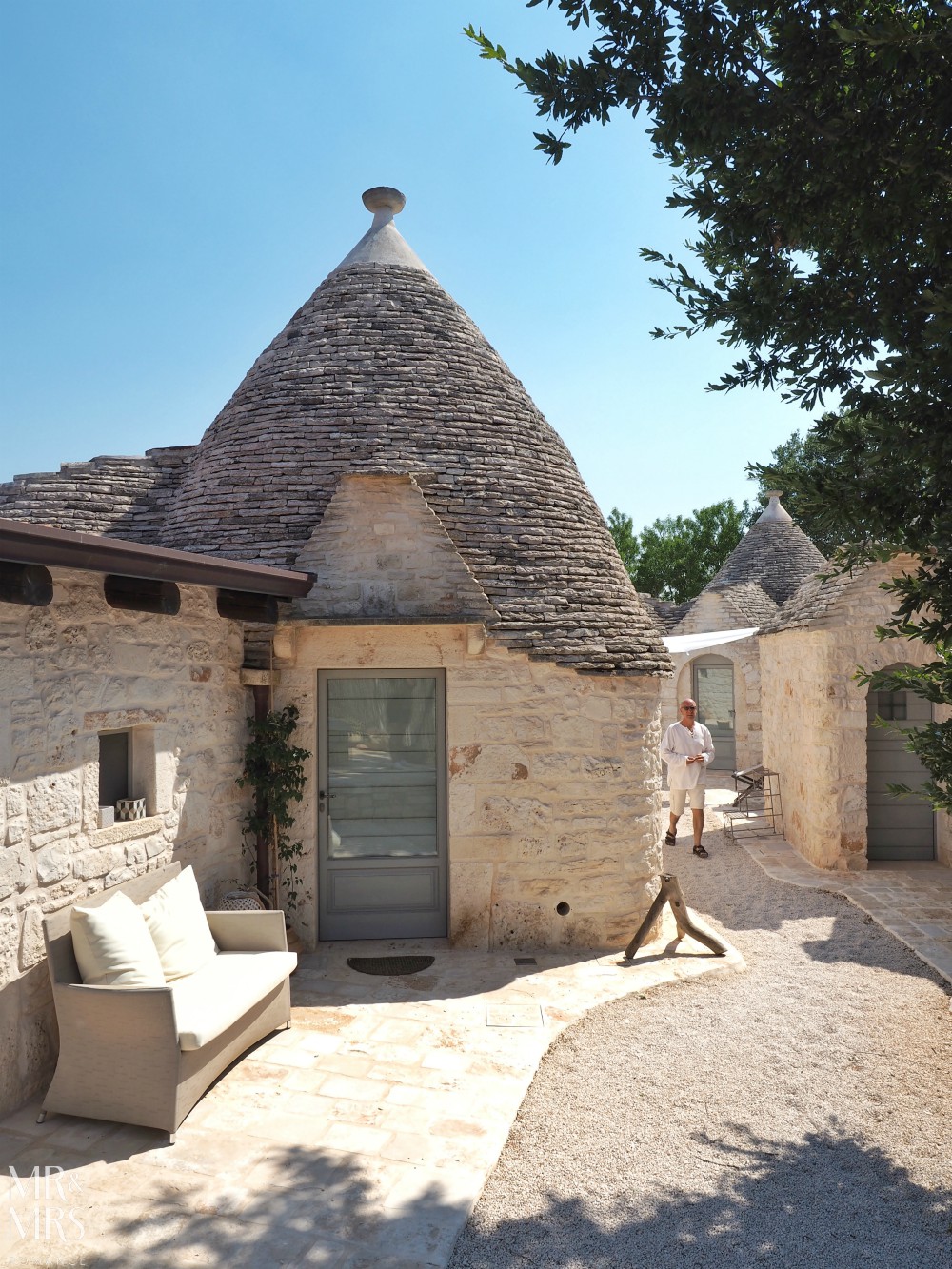 Stella and Christophe have been very careful to keep the original aesthetic of how this village would have looked. The little pathways between the trulli, the old trees and the unusual shape of the trulli themselves are striking and otherworldly.

Check out our full review of Le Dieci Porte here. 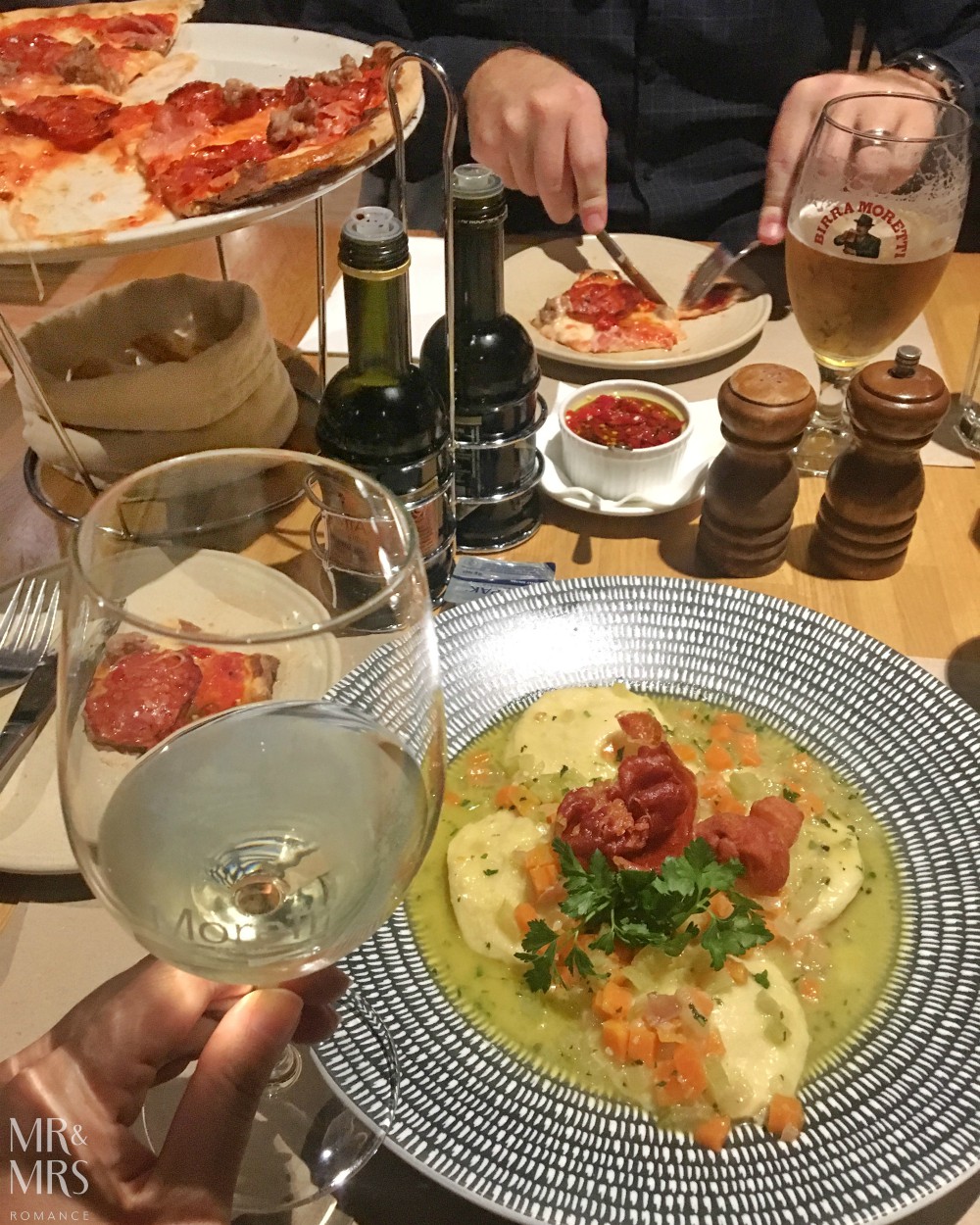 Tonight we’re out in Leichhardt – Sydney’s Italian heartland. The Lavazza Italian Film Festival is on at the moment, with a selection of Italian movies showing at Palace Cinemas. So we’ve decided to come and make a night of it.

First though, dinner! We’re next door to the cinema at an absolute institution: Moretti Ristorante Pizzeria, which has been in this suburb for over 20 years.

The pizzas here are amazing, but we always like to check out the specials too. Tonight, Mrs Romance has gone for the gnocchi dumplings stuffed with prosciutto and ricotta! An impressive dish. 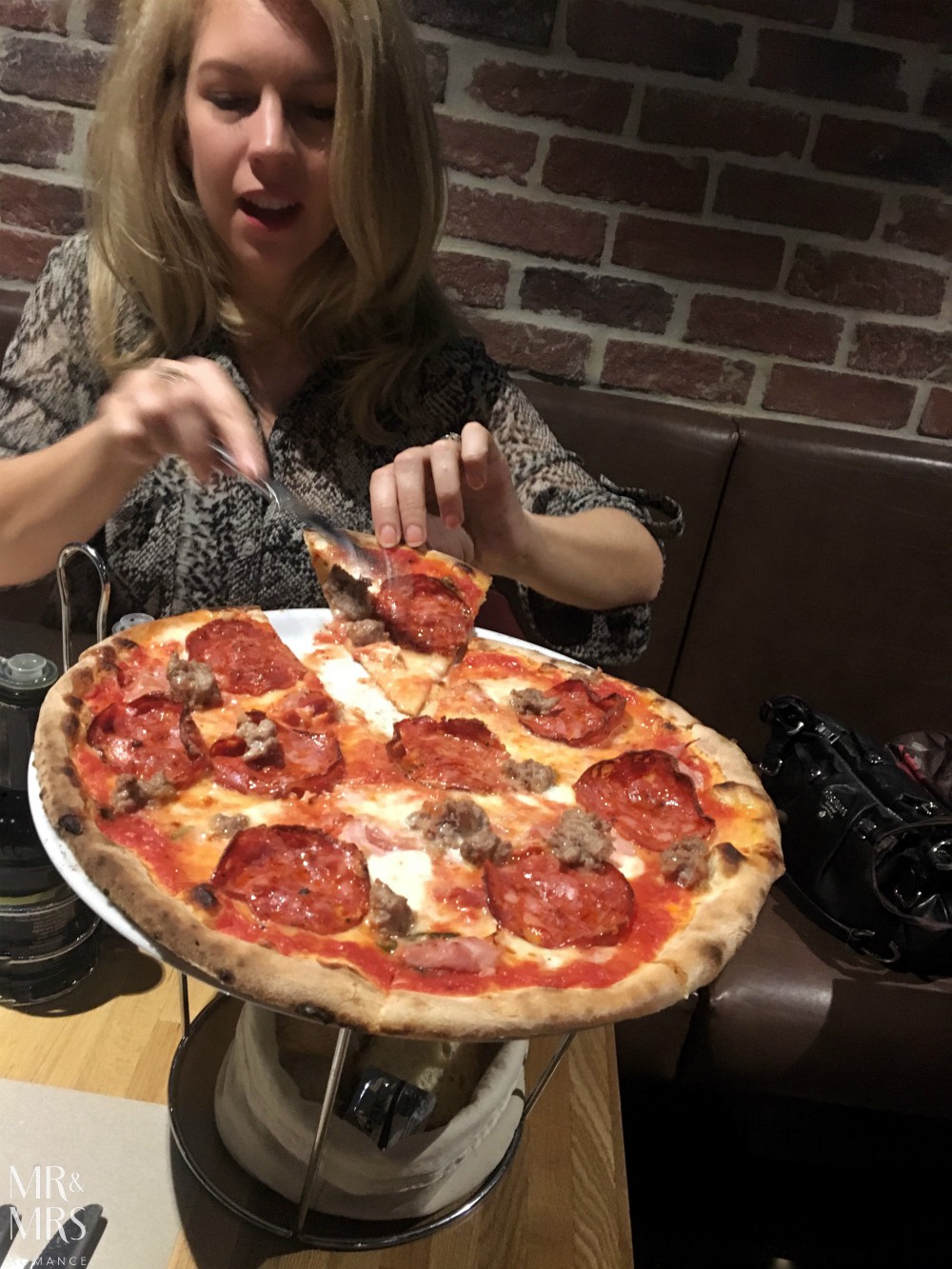 Can you tell Mrs Romance is also quite excited about the pizza choice too? This is Moretti’s ‘pizza maialona’ a bit of a meat feast, but so well that the flavours are still balanced. 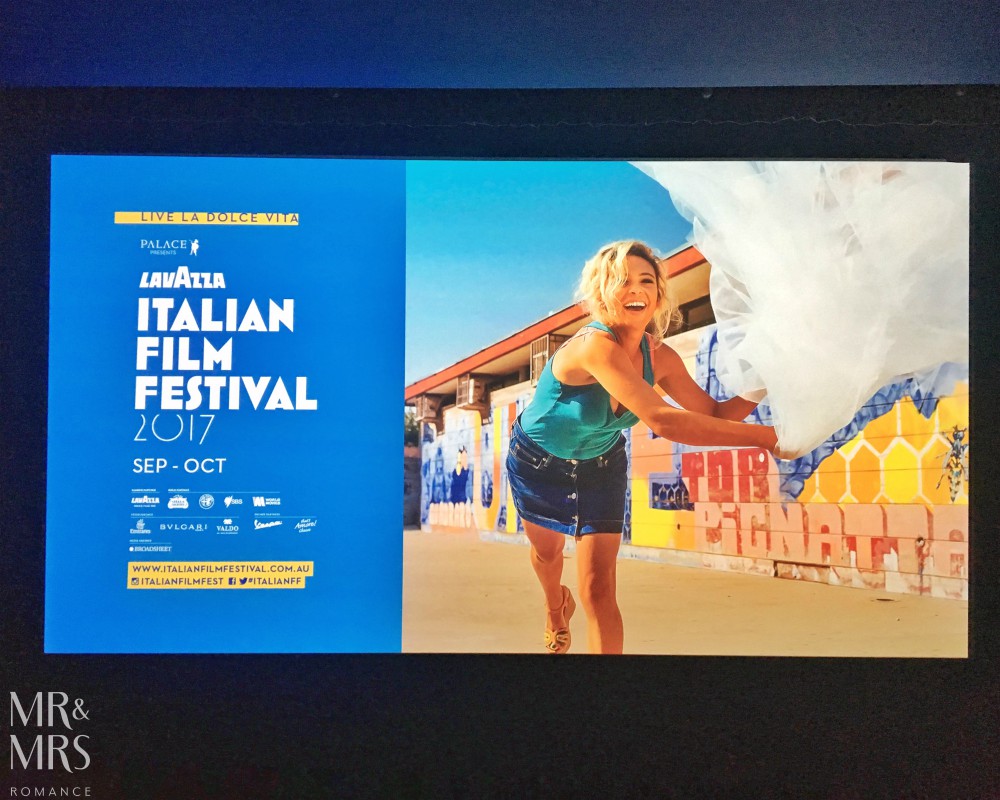 And now for the film. We’re here to see Non C’è Più Religione (There Is No More Religion) though its English name is simply ‘Messy Christmas’. It’s a comedy about a community on a remote island in southern Italy trying to put their town back on the tourist map with the best nativity scene ever.

The problem is there haven’t been any babies born in the community in a decade, and the youngest boy isn’t the best casting fit for Baby Jesus. Instead the wiley town mayor turns to the growing Muslim community for help.

This is such a classic Italian comedy with brilliant one-liners, unpredictable plot and beautifully developed characters. Well worth a look. 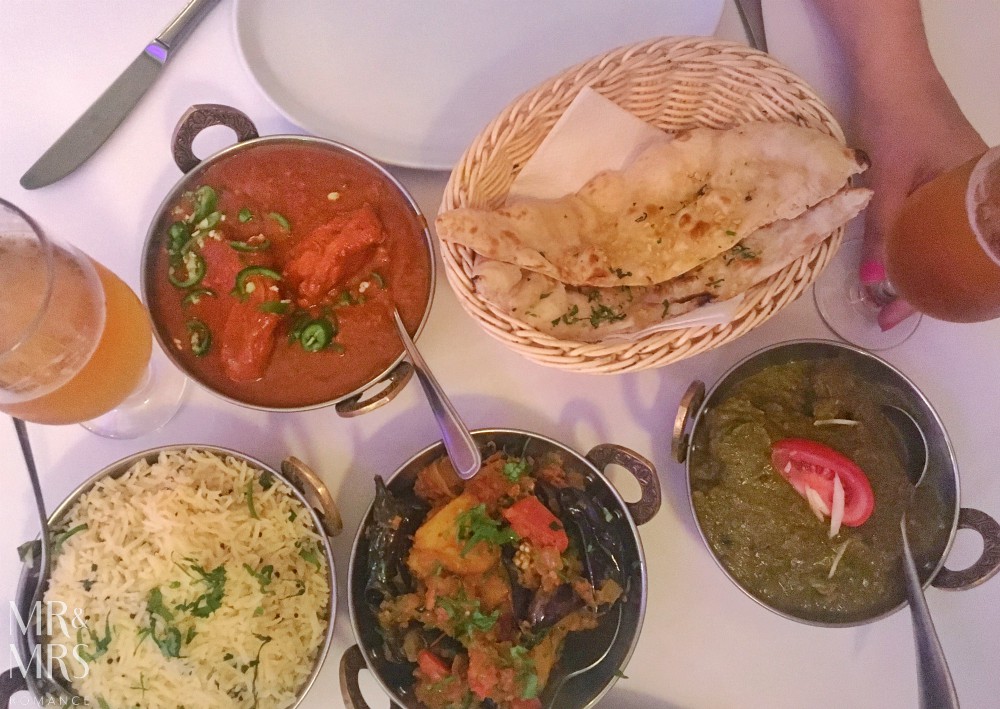 To finish off this awesome week, Mrs Romance has taken me out for dinner to one of my all-time favourite restaurants: Indian Palace in Balmain.

Since coming back to Australia from the UK, where we topped up on the most incredible curries, I’ve been pretty homesick for a good ruby. And unfortunately, Sydney’s a bit short on English-level curry houses.

This place is the real deal though. And though the heat in the curry isn’t as it is in the UK, the flavours definitely are there though. And chatting to the owner, Narinder Nahal, he tells us you can ask the kitchen to turn up the heat – it’s on a scale of 1-5.

However, looking at all the extra chilli on my chicken vindaloo, I think I’m set! And I’ve got my eye on Mrs R’s lamb saagwala too. 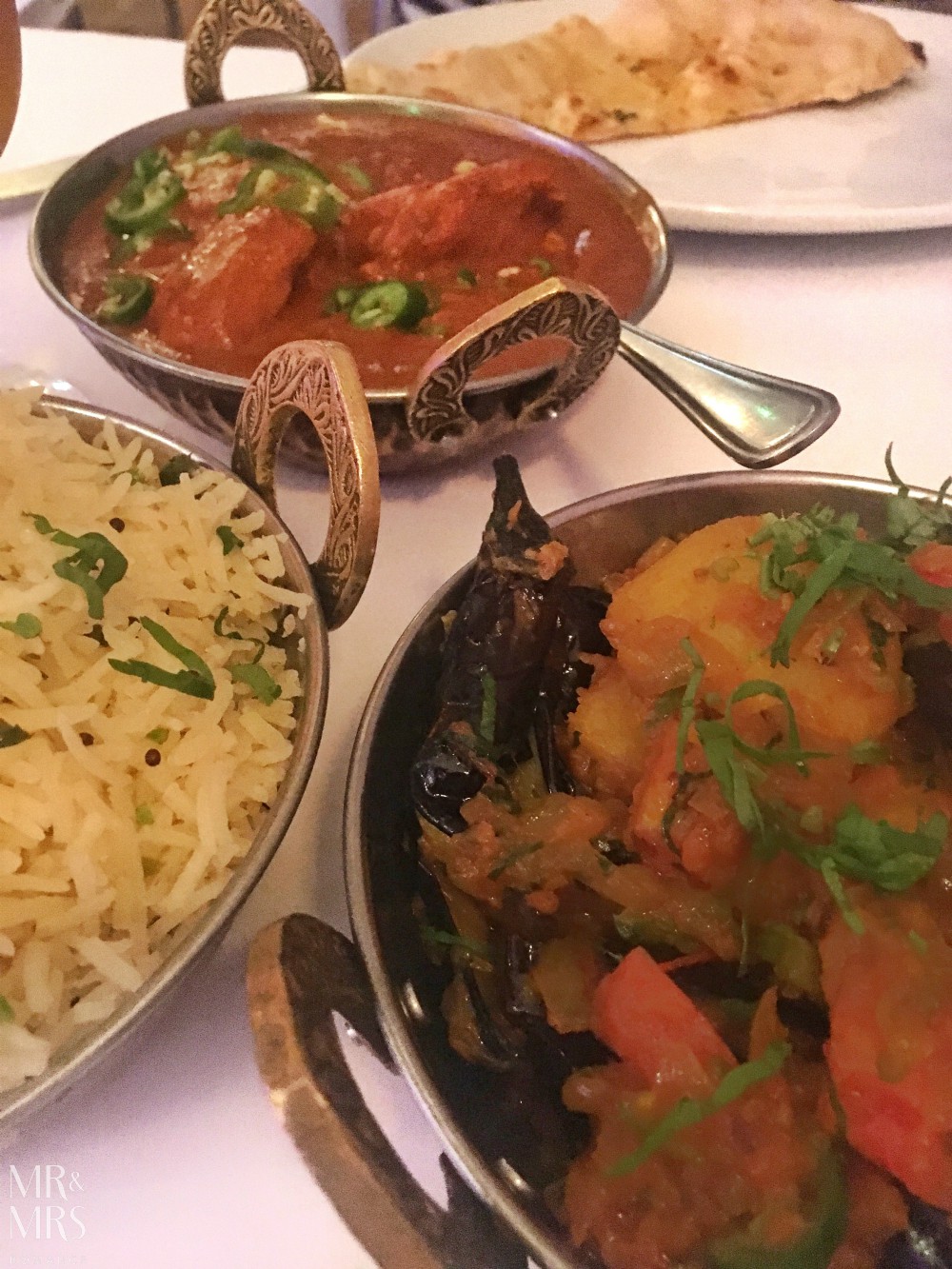 I’m so excited about this meal. And it really doesn’t disappoint. With only a main each and a side to share, Mrs Romance and I roll out of the Indian Palace stuffed and very happy.

If you’re from the UK and in Sydney, and you’re pining for a decent curry, this is the place to come. These guys have been here for 37 years and the chefs have been working together here for 22. And that’s how they achieve such quality so consistently. Can’t wait to come back here.

We hope you’ve enjoyed this IG Edition. We’ll speak to you again soon!

How to take your travel photography to the next level

Photography has become such an important part of everyone’s travel modus; making the most of your travel photography is essential. Here are our top…